When David and I started The Autopian not that long ago, one of the things we decided was that we weren’t going to fall into the trap of showing every single new Tesla FSD fail video, because there always seems to be a lot of them of very varying degrees of quality and interest, and after a point these just get to be gratuitous traffic-grab posts without any real new insight provided. That doesn’t mean I haven’t been paying attention to what’s been going on, which is why I noticed a pair of recent videos showing current versions of Tesla’s FSD Beta system in action, and failing in ways that I thought were worth exploring, not because of their complexity, but because of how basic the situations were. To help me understand what may be happening, I contacted an engineer who works on similar automated driving assist systems (and who needs to remain anonymous for work reasons) for a major OEM. Let’s take a look.

The first video is this one, posted by Seattle-area Tesla-focused YouTuber Gali on his channel HyperChange, shows his Model 3 (using FSD version 10.11.2) getting quite confused at an intersection and making the decision to turn the wrong way down a one-way street:

By the way, the author of the video has received blowback from other Tesla enthusiasts:

Ugh, these people. Gali, you didn’t do anything wrong. Well, other than letting your car turn the wrong way down a one way, I suppose. If you really want all of this to actually, you know, work, the problems have to be seen. And this is definitely a problem. Luckily, the full video is still up:

Okay, so, back to the video. What got me interested in this one is that while the driving environment here is a fairly complex urban environment, there’s really not much that’s all that unusual. The particular mistake the FSD system made here, turning the wrong way down a one-way street, is an interesting error because it’s one that potentially has extremely severe consequences – head-on collisions – and should be one of the most basic things that can be avoided.

My first thought was that even though Tesla famously does not use HD maps as a major component of their automated driving system, like, say GM’s SuperCruise does, the information that a street is one way-only must be recorded and available somewhere, right? I asked our AV engineer expert about this:

“Yes, Tesla does not rely on HD maps, but it does have access to what we call SD maps, basically just the regular GPS maps, and those know what streets are one way or not. Even something like Google Maps on your phone has this information.”

What I didn’t understand is why the Tesla didn’t seem to be aware that street was one way, or, if it did, why would it ignore that information? Our expert source didn’t have an answer for that, but did point out something else interesting. He noted that even if, somehow, Tesla’s FSD Beta doesn’t use one way street information from even the normal GPS-level SD maps, there were visual cues it should have been aware of: 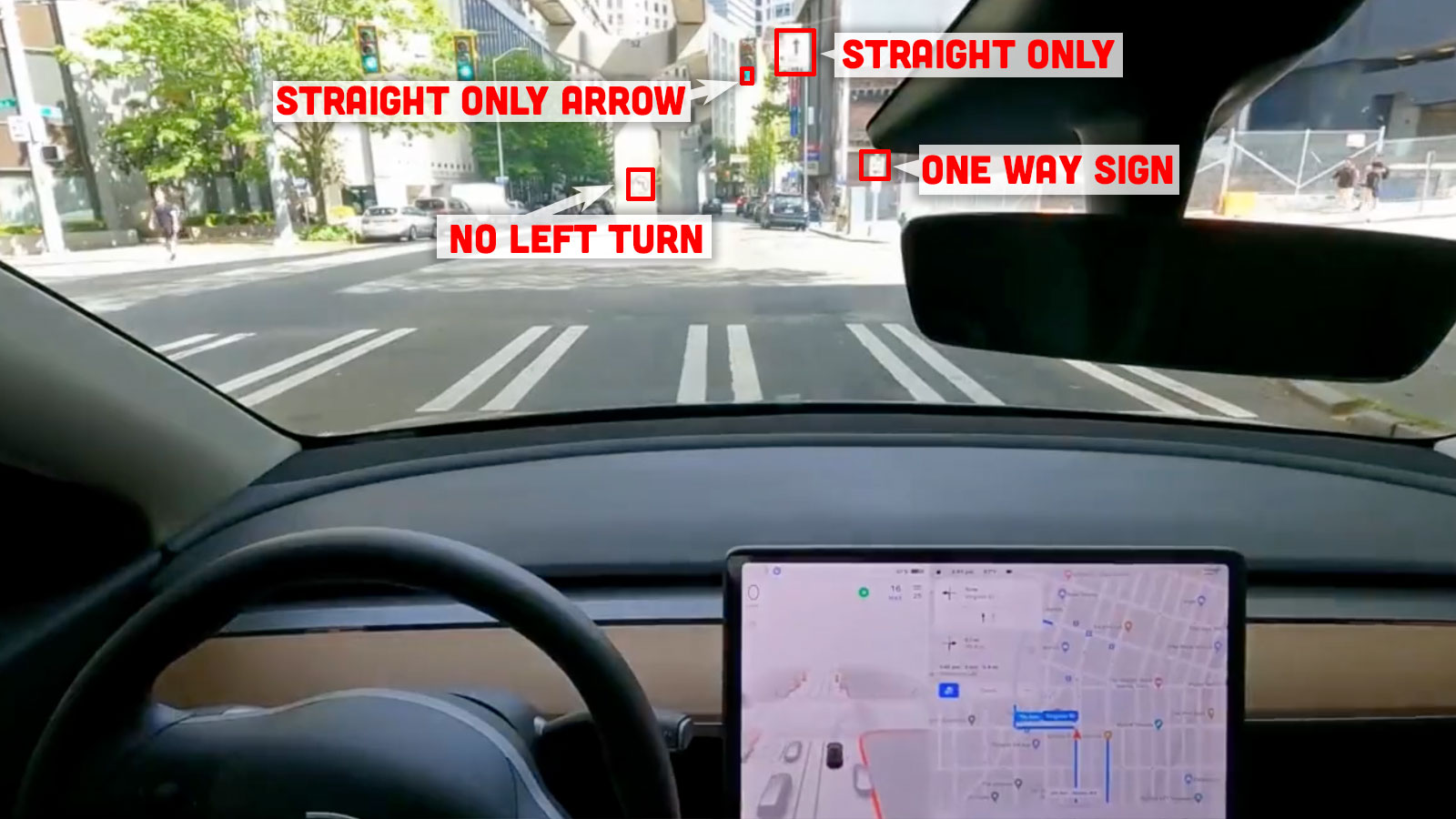 As our expert reminded me, Tesla’s system is capable of reading traffic lights and traffic signs, and uses this information to get speed limits for roads, see stop signs, and so on. Here, in the field of view of the car at this intersection, we can see a one-way sign, a no left turn sign, a straight-only sign, and a green up arrow in the traffic light, indicating that going straight ahead is the only permitted choice here.

That’s four separate visual reminders that you just can make no turns at this intersection, which should make things real damn easy for the AI piloting the car here, because there’s just one choice: go straight. So why the hell did it turn the wrong way down a one-way street?

Our expert did his best to figure out what could be going on:

“This looks like a good old-fashioned software bug,” he told me. “The car got confused, and as for why the car didn’t simply kick control back to the driver like you’d think it should, it may have – and this is just my opinion and guessing here – it may have chosen to keep trying because Tesla favors statistics that show lower reports of their system disengaging and giving control to the driver.”

What really bothers me about this situation is that this seems like the sort of issue that should have been solved on day one, before anything was released to anyone, beta or otherwise. Not driving into oncoming traffic on a one way street is not an edge case or an unusual circumstance, it’s the kind of thing that should just be hard-coded and checked for at the last moment before an action is taken.

The software decides the path it wants to take, but before that gets executed, that path should be compared to whatever map data is available to see – just a quick check, why not – if that path will take it the wrong way down a one-way street. If so, then don’t flapjacking do it. Easy. I get that the whole business of automated driving is wildly complicated, but making sure you’re not driving the wrong way down a one way street should very much not be.

A similar situation can be seen in this other video from a driver in Denver:

This is the scariest near-crash on Tesla Full Self-Driving Beta I've seen. The Tesla tries to turn directly in front of a train (light rail) in Denver. pic.twitter.com/eZE92qGD3t

In this case, the full video is no longer available.

What happens here is also remarkably simple – again, the simplicity is precisely why I’m writing about this. There’s an approaching light-rail tram, and FSD Beta attempts to turn right in front of it. If you look at the Tesla’s visualizations, you can see that the car did see there was a large vehicle approaching: 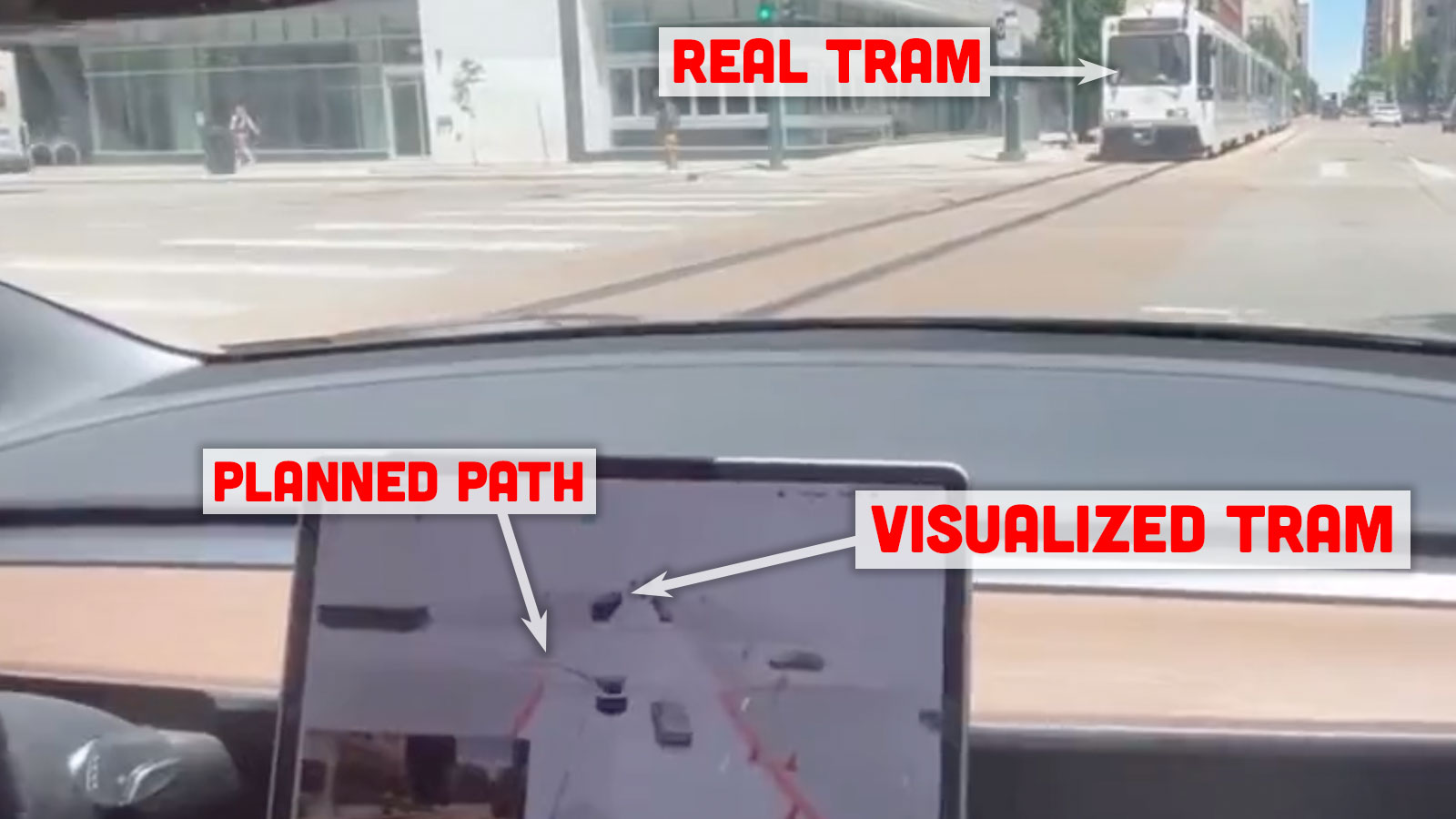 So, the Tesla saw the tram approaching, you can see it there in the video on the car’s dashboard screen, and still decided to turn in front of it. Why? Of all the complex and confusing situations an automated vehicle can encounter, this seems to be one of the most basic: big thing coming, clearly visible, so don’t put the car in its path of motion. Again, day one shit. I asked our expert if there’s anything I’m missing here that might explain this baffling and dangerous decision:

“The car sees the tram coming, clearly, perhaps it’s interpreting it as a bus, but that hardly matters. It sees it, it knows the velocity. I can’t tell why it decided to do this. Maybe it just bugged out, or there was a glitch. Things don’t always work out how you’d like with beta software.  It’s situations like these that makes me suggest that nobody should be using beta software in a moving vehicle. When I was at [major carmaker] and we were testing systems like these, I had to go through a full safety driving course. I’m always horrified Tesla is allowing normal people to test drive FSD software. I’m a software developer, I know how the sausage is made, so it’s terrifying to know people with no safety driving experience are having cars drive them around.”

In the past when I’ve written about these sorts of FSD videos I’ve usually made mention about how I know these are incredibly complex and advanced systems, and what they do manage to do safely is dazzlingly impressive, because it is, even if it isn’t perfect. But these two particular situations are not like that. They’re not examples of the car in a very complex situation trying its best and making an error that was a best attempt in a challenging circumstance.

This basic shit. This is not driving in front of huge moving things that are clearly visible, or violating basic traffic laws of which there is no excuse to be ignorant. This isn’t pushing up against the limits of what the AI can accomplish: this is, genuinely, stupid shit that has no place happening in a system as far along as FSD is, even if it still is in beta.

I wish I had better, more concrete answers for you. Tesla doesn’t talk to media about this stuff, and there’s only so much an expert can tell from these videos. But, there is something to be gained by making sure these videos are seen and commented upon, and that’s a reminder that these are Level 2 driver assist systems. Despite the name, they are not full self-driving, by any stretch. You always need to be in control, ready to take over, because there really is no type of mistake, no matter how basic or dumb it may seem, that is not out of the realm of possibility when using these systems.

I'm a co-founder of the Autopian, the site you're on RIGHT NOW! I'm here to talk to you about taillights until you cry and beg me to stop, which I absolutely will not. Sorry. Hug? Also, David's friend.
Read All My Posts »
PrevPreviousIf You Want To Get A Rebate On A Toyota Hybrid Or EV, Too Bad
NextThere’s A Rare Smart Roadster For Sale Just Across America’s BorderNext