My Diesel Manual Chrysler Minivan Has Died And Left My Dad Stranded. I Am Concerned

You may remember that 250,000 mile blue diesel manual Chrysler Voyager from that old German automotive lighting supplier I used to write for. I bought the van in Germany for $600, limped it through the country’s rigorous TÜV inspection, and then road-tripped the crap out of it to Belgium, Sweden, Turkey, and everyplace in between. I will soon be reunited with this incredible fuel-sipping people hauler, as I’m having a family reunion in July. Only one problem: The U.S.-engineered, Austria-built, Italian-engined van in Germany just left my dad stranded on the side of the road (just one KM from his house, luckily). And while that may not be a big deal if this were a gas vehicle, on a diesel machine as simple as this van, I have every reason to be concerned. Let’s talk through it.

I realize I just wrote an article about one of my cars breaking down, and I also realize that — given the abundance of crappy vehicles in my fleet, there’s risk of this website becoming overrun with vehicular obituaries — I promise, that probably won’t happen. But I’m losing sleep over this one, so I have to tell someone about it. One morning last week I was awoken by a phone call from my mother. “I have bad news,” she started in a somber tone, my heart immediately raising a few RPM in response. “It’s about your van. It’s dead.” WHEW, that’s not so bad news, I thought. It’s probably just something simple — the van is a tank, after all. I’ve put 10,000 miles on it without a single issue.

But then I thought a little more, and actually, maybe this is a big deal.

See, on a gas car, there’s a whole lot of bullshit that can cause a vehicle to die. There’s an electric fuel pump that could stop sending fuel to the engine, there’s a fuel pressure regulator that could fail and cause fuel delivery troubles, there’s an entire ignition system (ignition coil, distributor, rotor, ECU) that could all fail, there’s an alternator that could fail and cut off that ignition, there are a bunch of sensors including mass flow sensors and throttle position sensors and on and on. None of this stuff is a big deal to fix; the problem is, though, diesels don’t have most of these parts.

My diesel Chrysler Voyager has no electric fuel pump, it doesn’t need the alternator to run since it has literally no electric ignition system, there are basically no sensors to fail — everything is mechanical. There’s a mechanical fuel pump sucking diesel from the fuel tank (through a filter), squeezing it, and sending that high pressure diesel to injectors at precisely the right time so they initiate the combustion process.

The system is so simple that I really don’t know why an old diesel vehicle like my van would shut off suddenly. I could see it stumbling due to a number of potential issues like a worn out mechanical fuel pump or a failing head gasket leading to compression issues. But a sudden stop?

If this were a gas car? It’d be no problem. Hell, I’m almost at the point where I expect at least one of my gasoline-powered cars to suddenly shut down on the highway. I usually swap out a crankshaft position sensor or an electric fuel pump, and continue on my way. But again, this Italian-built 2.5-liter VM Motori turbodiesel in my van doesn’t have many sensors and there is no electric fuel pump. That’s why people love old diesel vehicles — there’s just so little that can possibly go wrong. Hence my concerns. Because maybe what went wrong is a big deal; maybe all those forum posts about how bad this 2.5-liter diesel engine is were right, and I’ve basically just been given a limited-blessing from the car gods that has now run out.

The video above shows the mechanical fuel pump on my van. It runs off one of the gears connecting the crankshaft to the camshaft (i.e. the timing gears — see below). Motion from those gears is used to move a rubber diaphragm in the pump, which moves diesel to the injectors. And while, sure, it’s possible that diaphragm — or other internal bits — have failed, would that have lead to an immediate shutoff, or would it have stumbled? I’d think it’d have stumbled; that tends to be how fuel-delivery issues reveal themselves.

Maybe the gears running the pump failed somehow? This would have led to instantaneous shutoff, as there’d literally be no diesel flow at all as soon as the gears failed. But that seems highly unlikely, right? It’s rare for timing gears to fail.

I checked out the repair manual for the VM 425 engine family (four cylinder, 2.5-liter), and here’s what I found as the recommended diagnostic procedure: 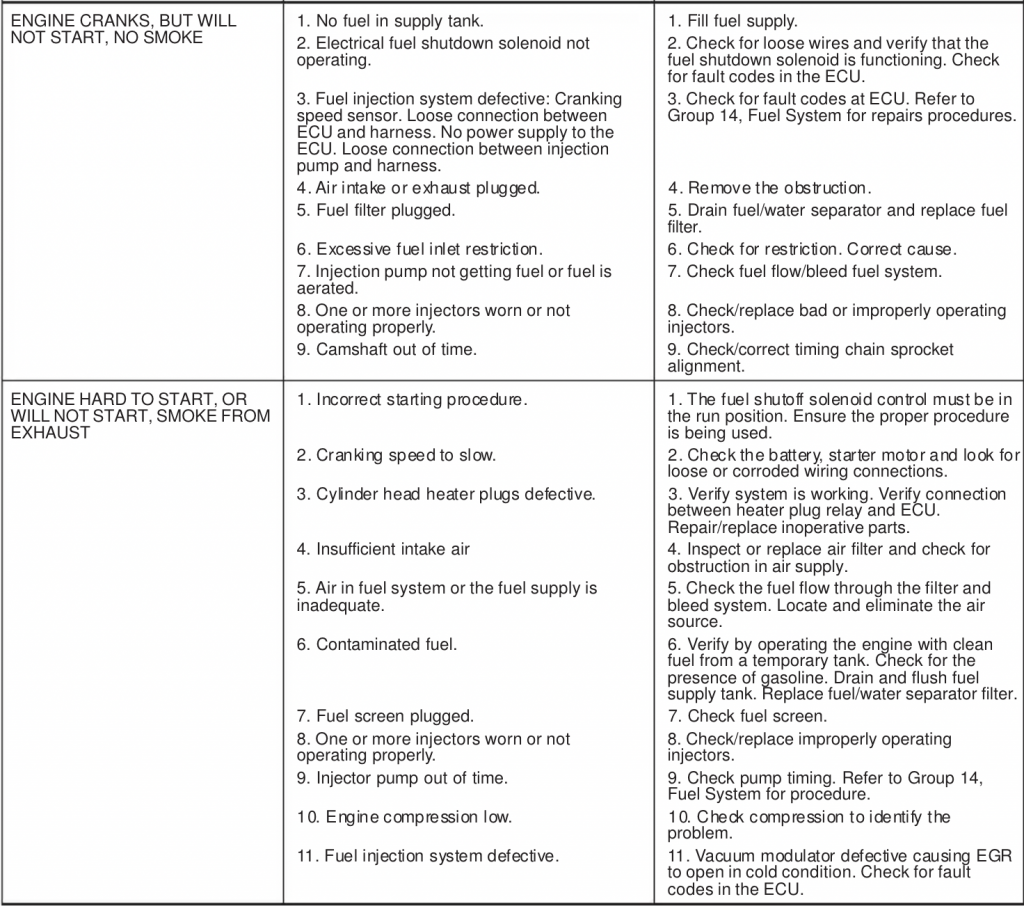 A no-start condition pretty much always means a fuel supply issue. My van’s tank is full, and my fuel filter is new-ish, as is my air filter. There are no leaks coming from any of the fuel hoses or lines, and there’s probably no way that there’s an issue with those beefy metal timing/fuel pump-drive gears.

That sort of leads me to the “electrical fuel shutdown” solenoid being an issue, or that maybe the ECU that controls that is either bad or is connected to a bad wiring harness? But these seem like highly unlikely failures, especially since the car was sitting inside a garage, away from wire-chewing rodents.

Anyway, I’m now reading through the German 1994 Chrysler Voyager repair manual, specifically the “Dieseleinspritzanlage” (diesel injection system) section, and I have to say: This is some pretty dry stuff. Here’s something about a magnetic fuel shutoff valve: 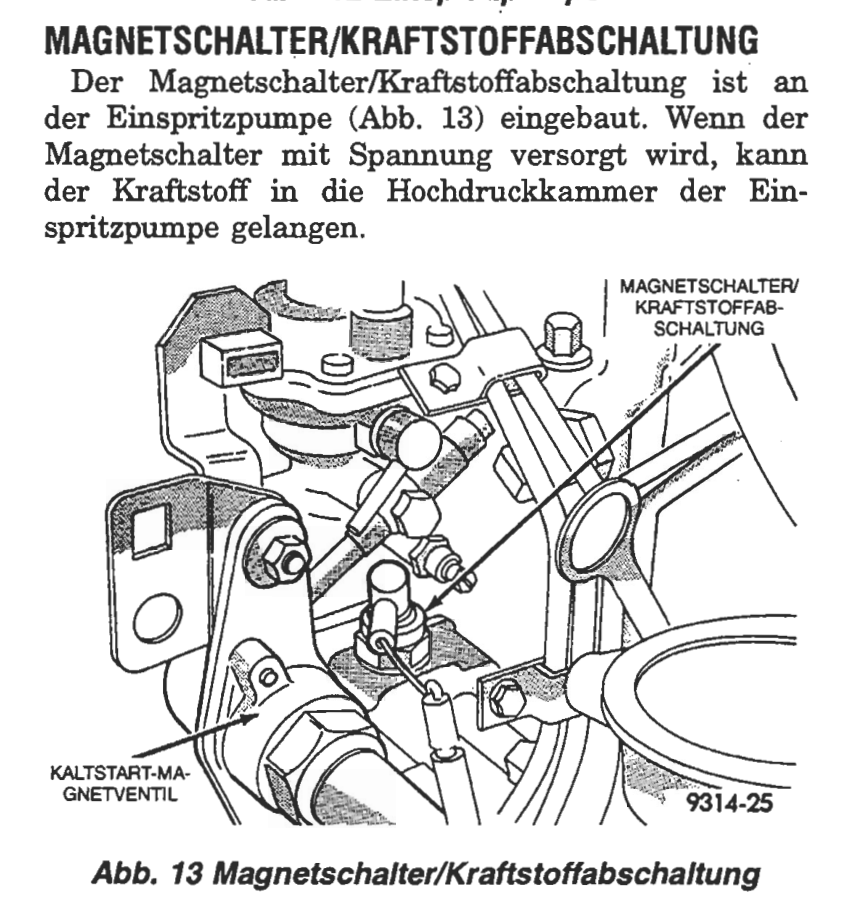 It appears there may also be some sort of pedal position sensor “Drosselklappenstellung” on that fuel pump, which sends some kind of signal to the ECU: 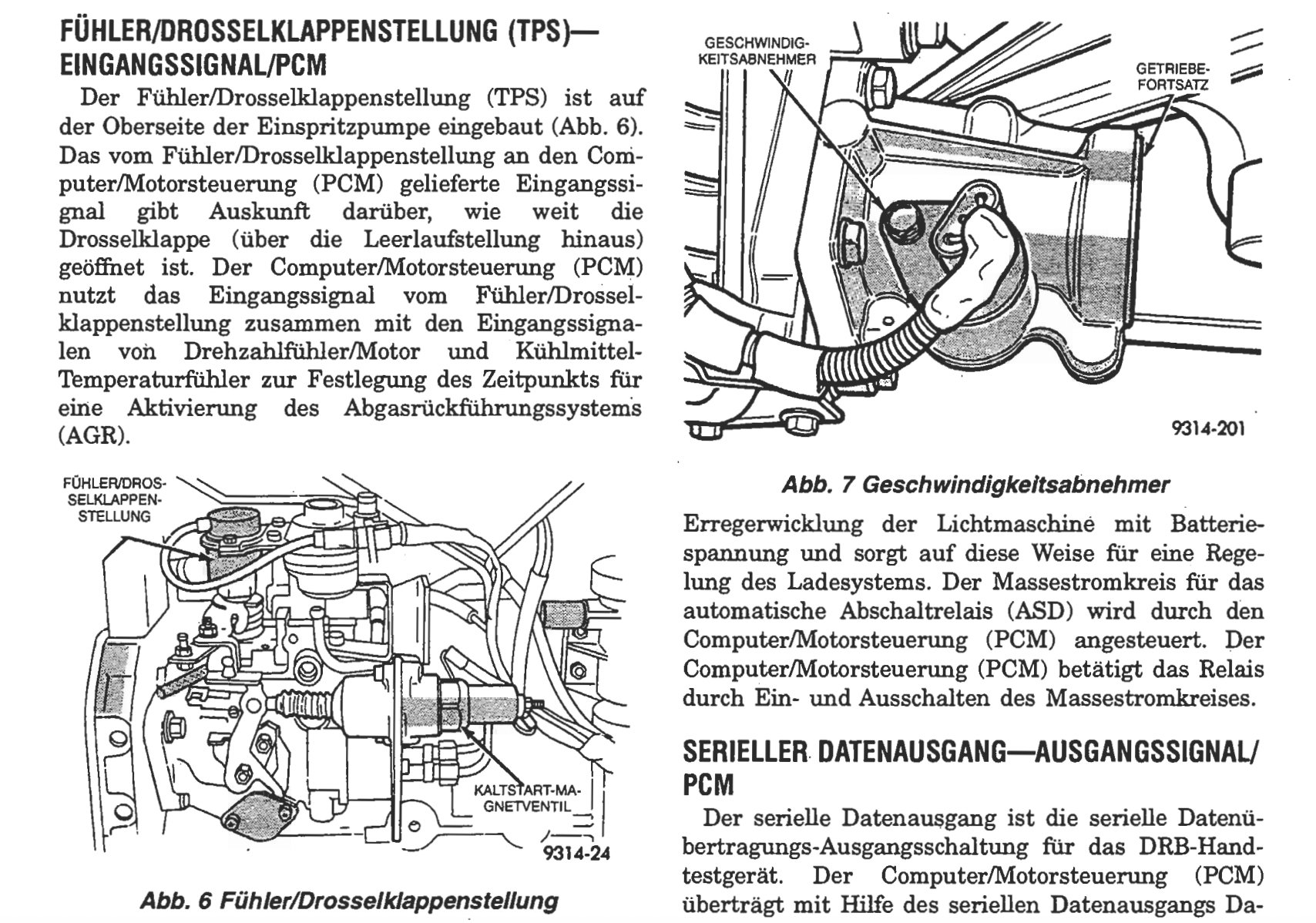 I don’t know. I guess maybe there could be an electrical fault, here. But when the roadside “ADAC” mechanic came to help fire the car back up (That’s right; in Germany, if you ask for a tow, the mechanic will actually try to get your car going. He even loosened the injectors to check fuel flow!), he said there was no gas getting to the injectors and — per my mother — that intake air seemed to be flowing the wrong direction. So did my timing gears fail somehow? 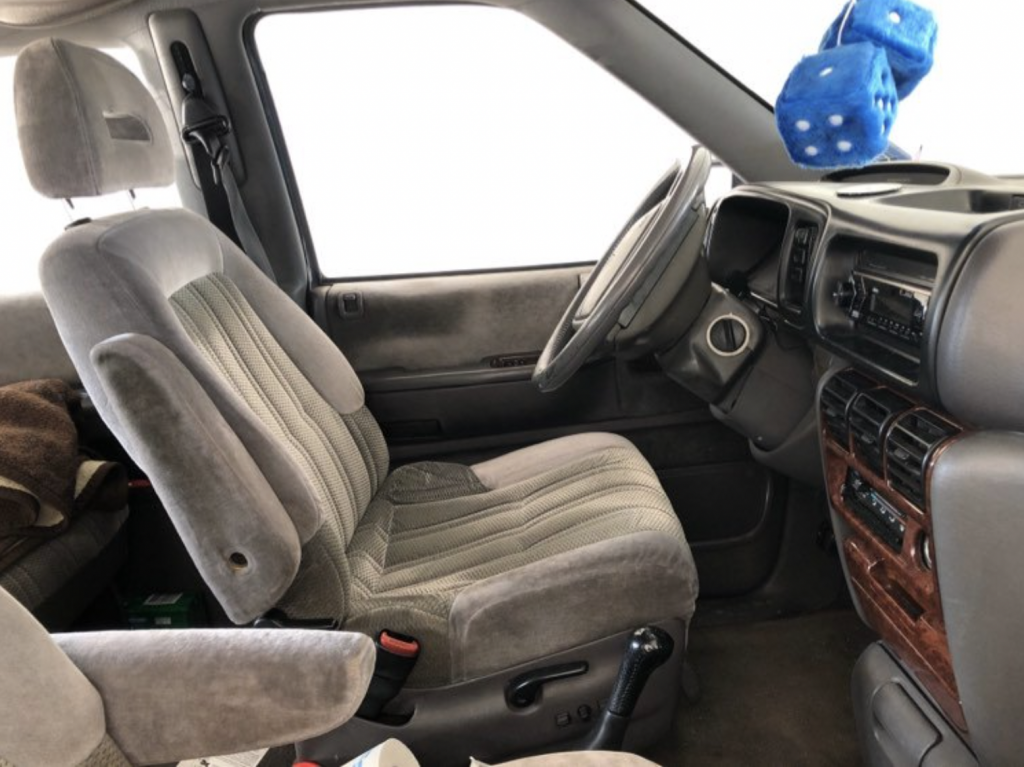 My mom turned the engine over via video chat, and to me it sounded like there was compression. So maybe all hope isn’t lost? If it were a major mechanical issue, you’d assume it would either seize the motor instantly or cause some poor-running conditions (i.e. if the head gaskets failed or the bearings ate themselves) first — it wouldn’t just cut out immediately but still crank fine. Right? 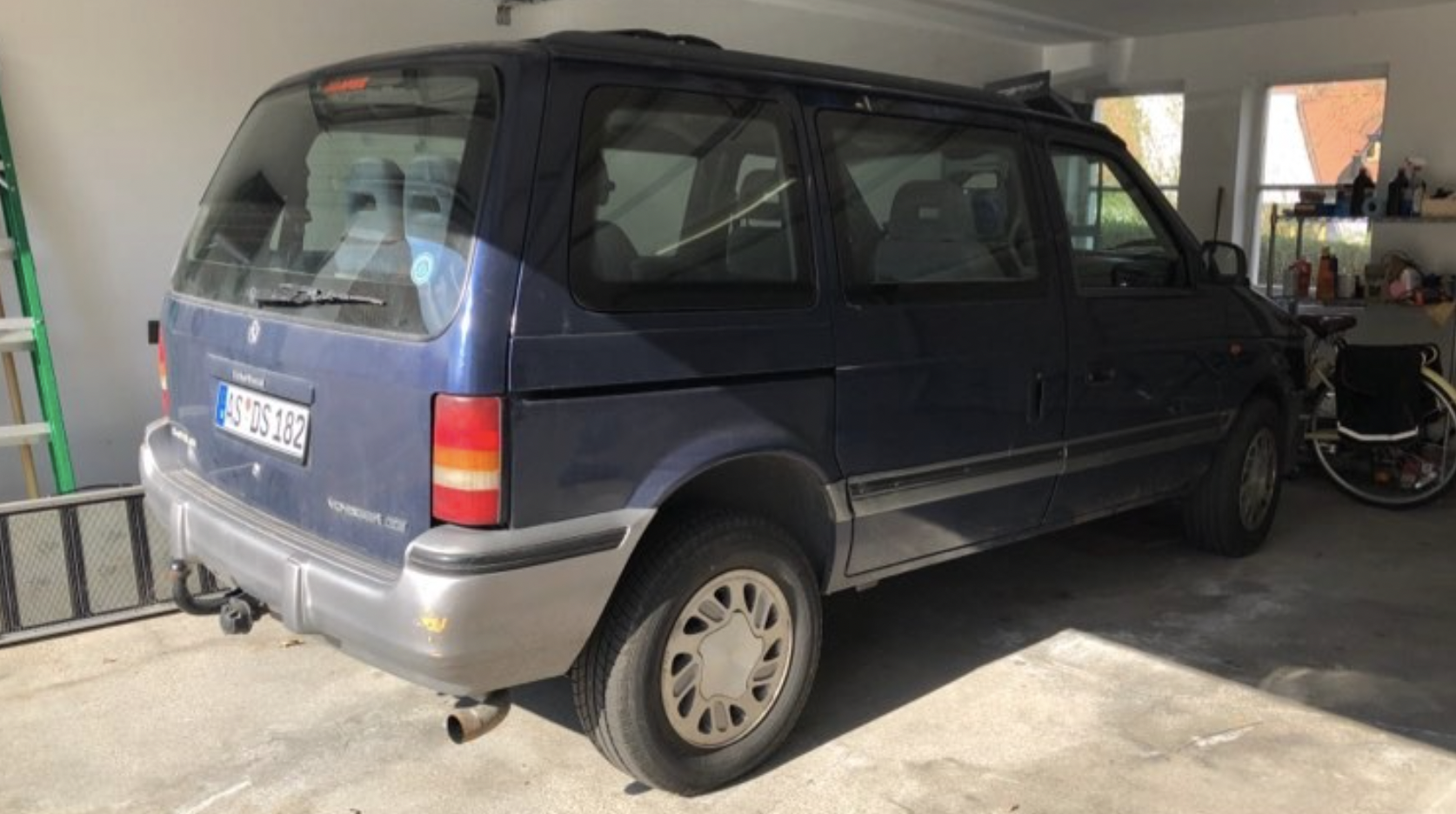 I am worried. Deeply worried. And that worry won’t let up until I’m there in Germany to nurse this van back to health; if that’s even possible. I hope so, because this van is supposed to drive to the Land Of The Piaggio Ape in two months.