I’ve been in denial about this for a while. “My cars aren’t holding me back at all,” I’d convinced myself for years. “If I wanted to, I could sell them all tomorrow.” Recently it’s become clear that this just isn’t true, as has been proven by my move to LA, which should have happened months ago but hasn’t yet due to an anchor made of tons of American iron. So I come to you asking for advice on how to move past this.

The truth is, I’ve been wanting to leave Michigan for years, but what happens is: 1. November rolls around, things get cold, and I tell myself “I’m out of here.” Then 2. I fly to Germany or Hong Kong to be with my family for Christmas, and stay over there for a month working remotely. 3. I get back, spend a few months in cold Michigan and then the sun comes back out in April. 4. Weather is absolutely perfect from April through October, and car culture thrives. My enchantment with Michigan swells. 5. I vow never to leave Michigan. 6. November hits again. 7. Repeat.

[Ed note: Right before the pandemic I had dinner with David and our bud Aaron Foley and pleaded with him to move. I offered to buy one of his cars. Anything to make it happen. It didn’t work. Then during the pandemic we hung out in a junkyard and had the same conversation. Next week I’m going to make him get an apartment. Just tell him to sell all but two of his cars for everyone’s sake – MH]

This has been the cycle for about five years. My upbringing as an Army brat has built within me an insatiable desire to move every year or so, and yet I’ve staved off this urge by traveling so often and for such long durations — I was just in Australia for a month earlier this year, I was also in Germany and Italy, plus I see my brother in Hong Kong relatively frequently. But I don’t know that I can push this off any longer, mostly because the long-term future of The Autopian depends on me being in LA and working with our talented behind-the-scenes crew out there.

So I have to go, and in truth — as a single dude who feels a little out of place in suburban Michigan, and who’d like to try listening to the buzz of a bigger city for the first time in his life (I’ve only ever lived in small cities) — I want to give it a shot. The problem is these beautiful mechanical anchors:

Let’s go through them one by one. Each car has a poll below it; I’m eager to hear your recommendations (it might make sense to read the whole article before going back and voting).

1985 Jeep J10: Store In Michigan Or Drive To California 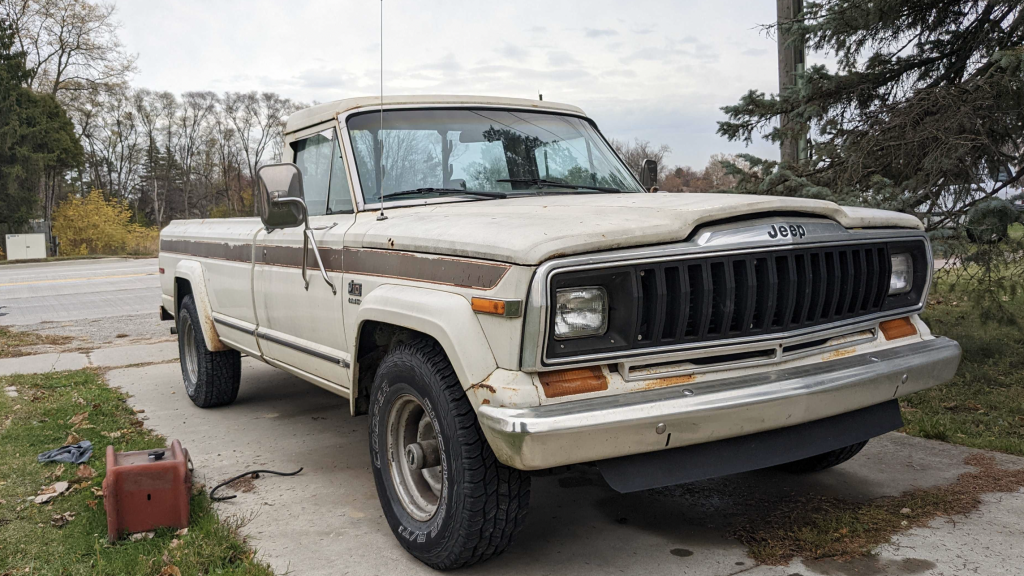 I love this truck with all my heart, but I don’t think it’ll make it through emissions inspection in California, mostly because all the smog stuff has been ripped off. I could fuel inject it using a Jeep 4.0-liter cylinder head, then throw on a 4.0 catalytic converter and hope the shop doesn’t care that I don’t have an air pump on my accessory drive. But I don’t know that this will work; California has a “visual” inspection, so even if my now-fuel-injected truck is cleaner, it’d likely fail. Logical? No. But such is life.

“Sell it,” you may now suggest, but I can’t. It’s the greatest truck on earth, and I can’t let it go. It’s true mechanical perfection in my eyes. As of now, my plan is to store it somewhere. Or maybe take it to California. I haven’t decided. 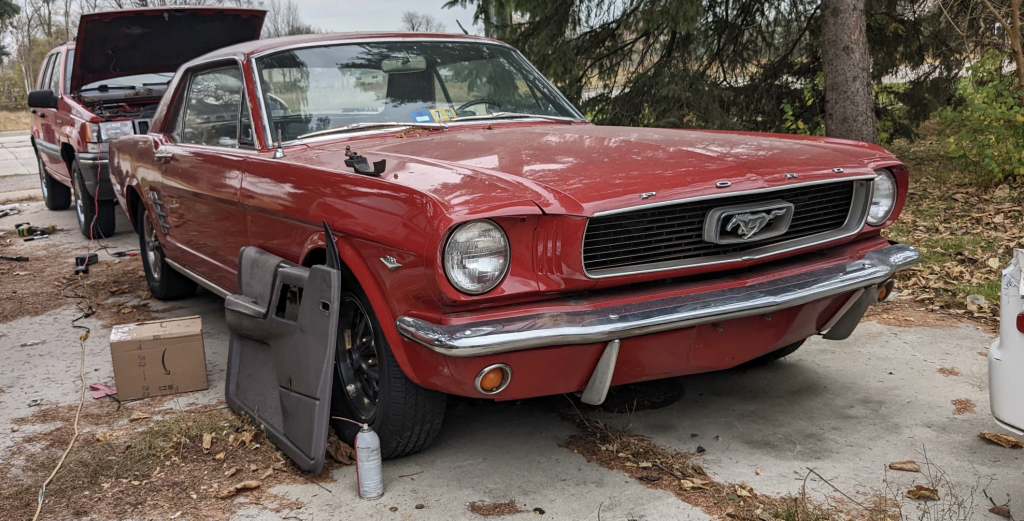 Is there a place where this vehicle would be more at home than in southern California? Answer: No. I’m daily driving this. I have some security concerns, so I’ve purchased a GPS tracker and a “club” steering lock. I hope those do the job; I’ll also make sure to park it in a garage whenever I can.

I’ll likely drive this on weekends as my free Nash Metropolitan will be my true daily driver that I take to work and park on the streets without worry. I doubt anyone wants to steal that. 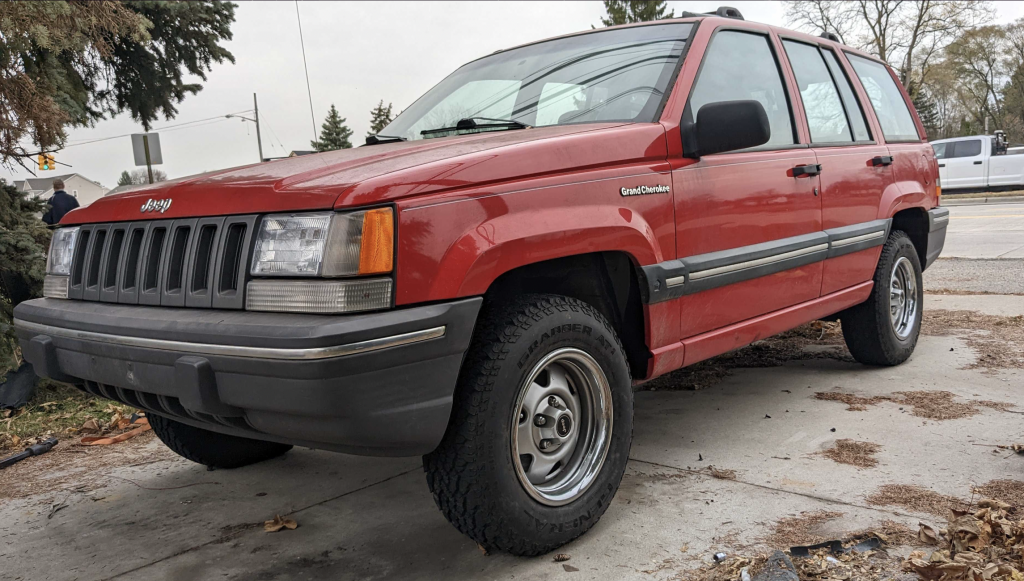 What you’re looking at is the most perfect Jeep Grand Cherokee on earth. It’s the first model year with a five-speed manual and manual windows and locks. It’s not only the lightest Grand Cherokee in history, it’s also the most reliable, and it’s the best off-road platform. Hopefully I can find someone who understands the rarity and value of what I consider the ultimate Grand Cherokee, as I’d like to get as close to $10 large out of this 130,000 mile, rust-free Jeep as possible. If not, I may have to keep it, which would complicate things. 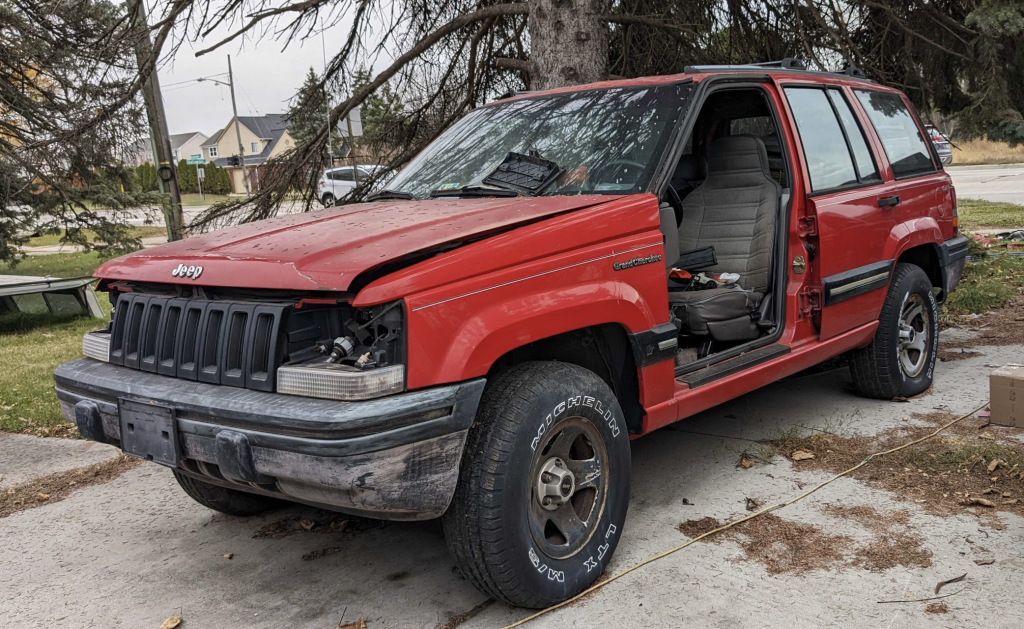 Of course, I’m not going to sell all of my “Holy Grail” manual Grand Cherokees. I plan to keep the rougher 1994 model that I bought for $350. Why hold onto this one? Overly pretty cars are a pain in the ass to maintain, and this one being a bit rough around the edges will give me more peace-of-mind. Plus, I’ll feel less guilty when I put a mild lift and bigger tires on it; I’ve heard off-roading in California is pretty damn good.

The issue is that this Jeep is still far from being roadworthy. I swapped the guts from that rusted-out Holy Grail in Wisconsin that I wrote about years ago, but there’s still a lot to do before this thing can move under its own power. I could fix it over the next month or so and then drive it west or I could tow it and wrench later. 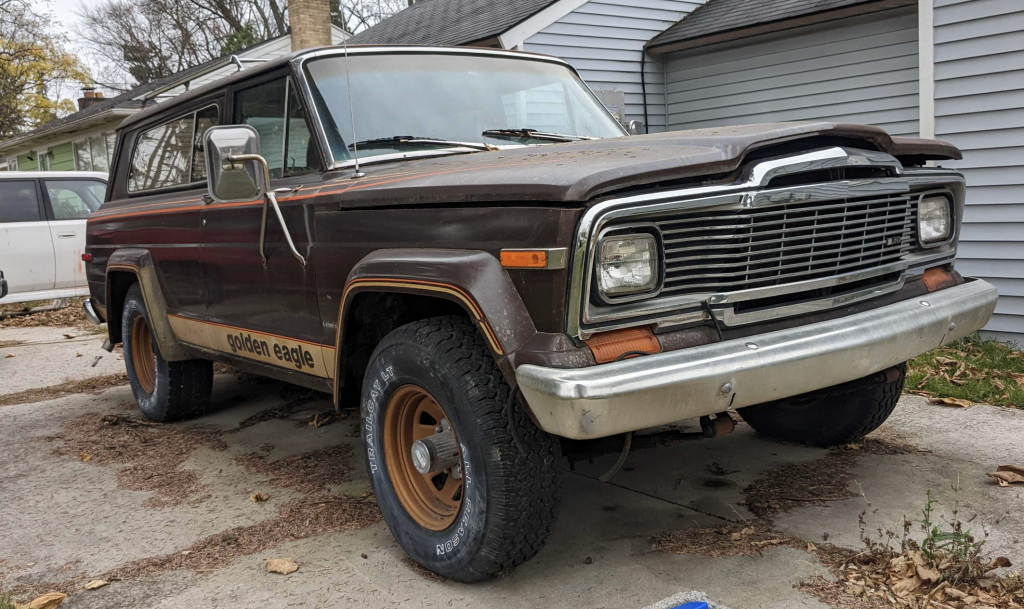 Oh man, this Jeep is one of my biggest regrets. It ran when I bought it, I removed a cylinder head to extract a broken exhaust stud, then I flew to Germany for a month. When I returned, I saw some surface rust on the cylinder walls, so I pulled the engine and honed it; I figured I’d swap the rings and bearings while I was at it, but sadly I could never get the motor back together properly. So I bought a rebuilt engine, which seized.

Honestly, the fact that this machine has been sitting for over five years is a result of only one thing: my own stupidity. I am ashamed, though I am twice the wrench I was back then.  So should I fix it and then sell it for some heavy coin? Or do I sell it as is and give up the five grand delta?

This is a tough one for me because, if I’m anything, it’s a cheap bastard. 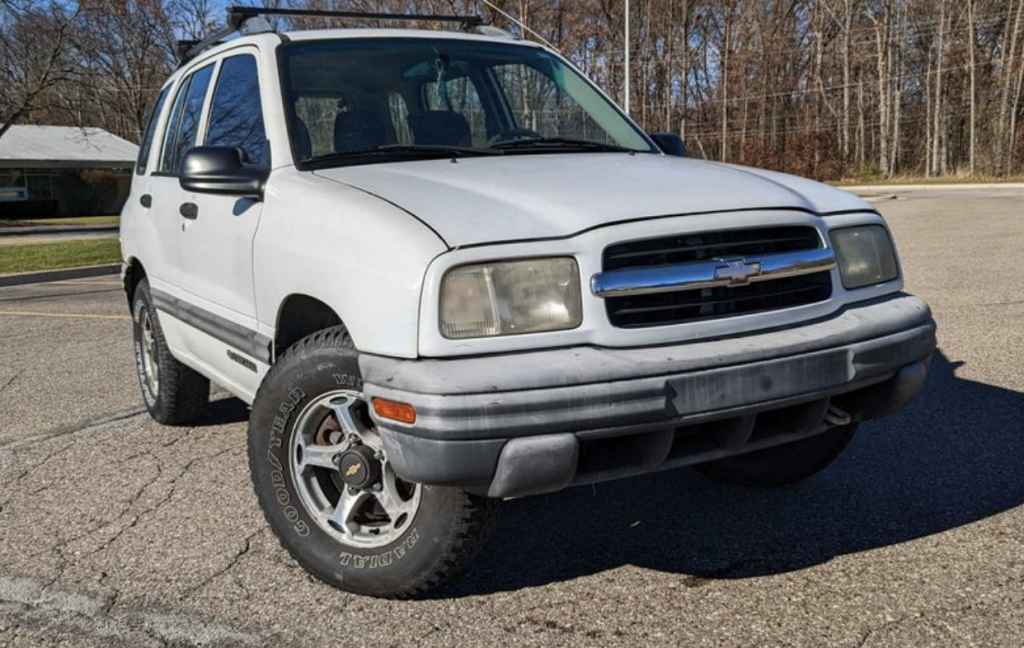 I should never have bought this Tracker, though I’m pleased with how far it’s come. I’ve fixed the crankshaft damper, cleaned the interior, bondo’d the huge dent in the quarter panel, installed junkyard all-terrain tires, fixed a few electrical gremlins, jerry-rigged a fix for the four-wheel drive system, and swapped out all the fluids. This thing is beautiful now, and I even have a buyer willing to throw me $3,000 for it. Not quite my $3,500 asking price, but close.

First, I’m taking it off-roading tomorrow (you’re all invited). This will be the second time I’m off-roading a car just prior to sale; the first time, I filled the engine with water, then that water froze, and when it thawed, I learned that my crankshaft bearings had been wiped. (You may recall my article “My 1948 Jeep’s Engine Is Ruined Because I Am A Dumbass”). I hope nothing similar happens this time around. I really shouldn’t be off-roading this thing before sale, but come on — I did all this work to this thing; I have to see how good it is in the dirt, right? 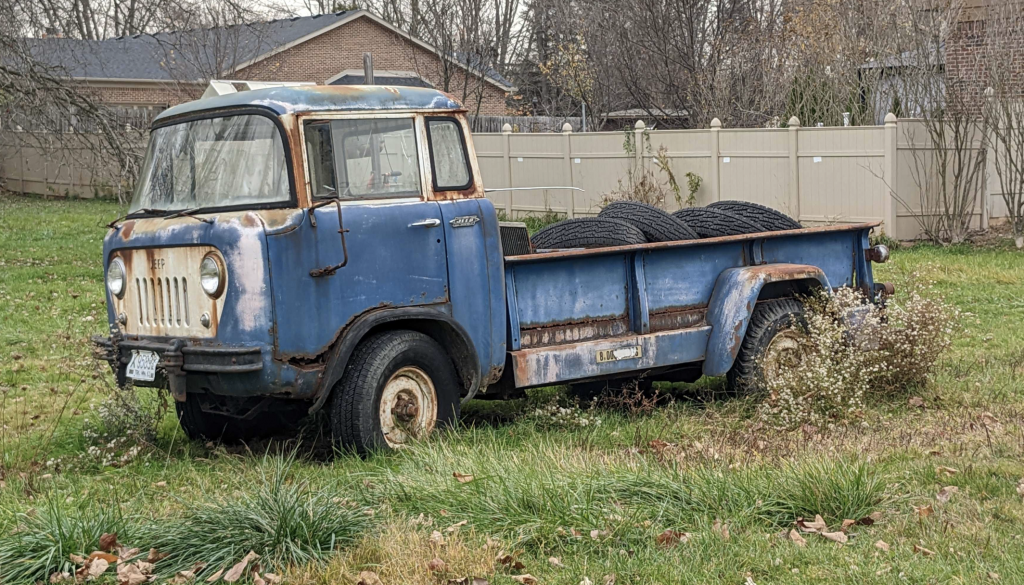 I want to do an EV conversion soon, and I really think this FC is the ideal candidate.

Could I just buy one on the west coast? Yes. That’d make my life easier. But look at the pedigree this one has!: 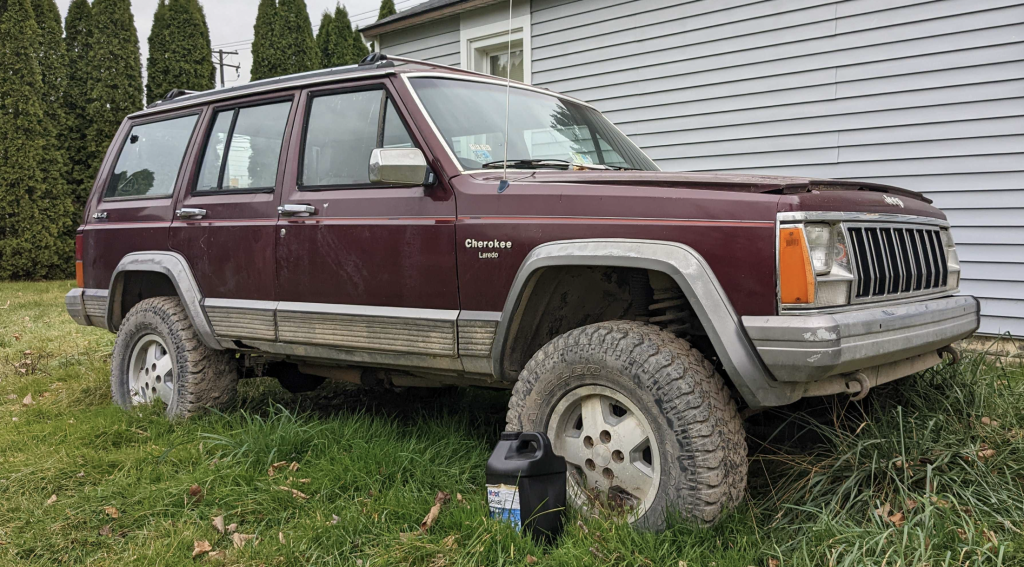 This one’s a tough one. The Jeep isn’t in great shape at the moment; I flooded the rear diff, so I need to replace the axle. Plus the cooling system needs some work — likely a new radiator. These aren’t huge jobs, but they’re not nothing, either.

I suppose I COULD bring this Jeep out to California, or I could store it, or I could sell it. But this is my very first car. Should I sell the Jeep that started it all?

So I want to keep the 1992 XJ, the J10, the 1994 ZJ, the FC, and the Mustang. I could just bring all five of those, and sell the rest. There should be plenty of space to store these machines on the Galpin lot that Beau has so graciously offered up. Maybe I could tow the FC with the J10, then drive everything else out. Or I could ask an automaker for a big-ass heavy-duty truck and a car-hauler, and just tow the whole fleet out.

Or I could sell the original XJ and the FC, and just take the J10, 1994 ZJ and Mustang. Then I can find another FC out west and cry myself to sleep every now and then missing the ’92 OG.

I don’t know what the answer is. But I need to come up with something soon.

Rust-loving Jeep man, cofounder and EIC of The Autopian, Jason's friend. Email: david@autopian.com
Read All My Posts »
PrevPreviousThe Buick Century Is Back As An Ultra-Luxurious Minivan And It Rules
NextCamping Tech: Here’s How You Can Add A Faucet To A Budget Camper SetupNext