Camping Tech: Here’s How You Can Add A Faucet To A Budget Camper Setup

Last night, I got a little obsessed over seeing if I could build a tent-based camping trailer for cheaper than you can get from a manufacturer. I was successful, but I hit a snag in one critical area. How do you get a sink with running water for a car camper, camper van, tent camper, or similar? I found a potential solution, and it’s pretty affordable. RV supplier Dometic will sell you an 11-liter compact water jug that will fit just about anywhere, and a battery-powered faucet for just $170.

During the summer, I bought a rare 1985 U-Haul CT13 fiberglass camper. It needs some restoration before I can camp in it, and hopefully, we’ll have a huge announcement about that in the future. But for the past two years, my wife and I have been camping out of our cars. I’ve never been a fan of car camping or tent camping, so I’ve been finding tech to make things a lot better. One gamechanger was my EcoFlow power station. I talk about the thing a lot, and that’s because it’s just that awesome. Having residential-like power makes sleeping in the back of a Chevrolet HHR or in a tent feel so much more civilized. 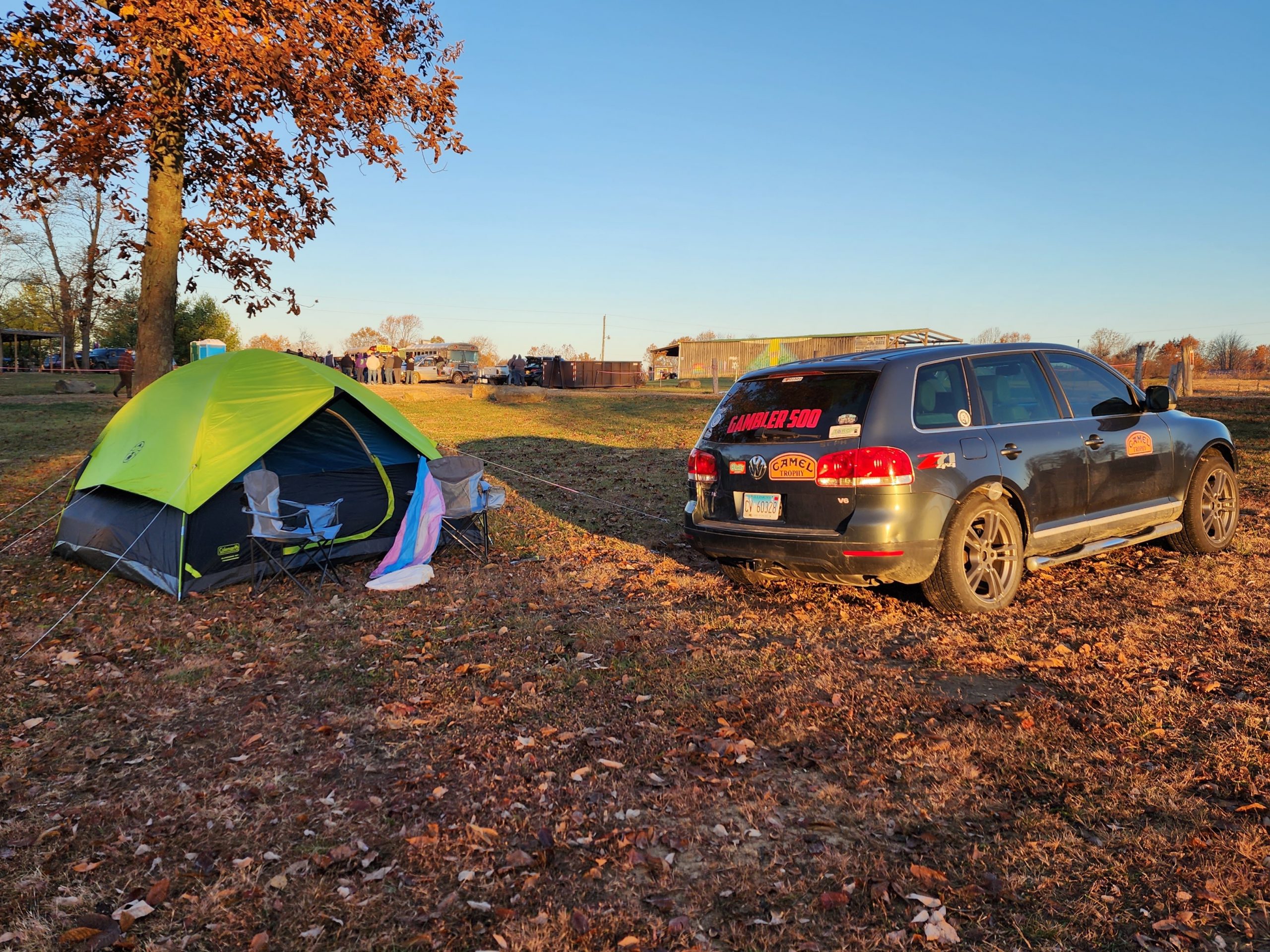 We’ve also added a nifty propane heater. When combined with a 20-pound propane tank, we’ve been able to sleep comfortably in some downright terribly cold temperatures. These are both things that I could see being added to a budget camper build to make things just a bit better. But one thing that Sheryl and I have been missing is running water.

Sheryl and I have an interesting dynamic. I take care of the mechanical stuff, and she’s the domesticated one. Last time I tried cooking a dinner from scratch, I nearly set my hair on fire. And one of the last times I tried helping with grilling, I set an entire gas can on fire. So, I’ve learned my lesson. Despite that, even I know how much running water would make things better. 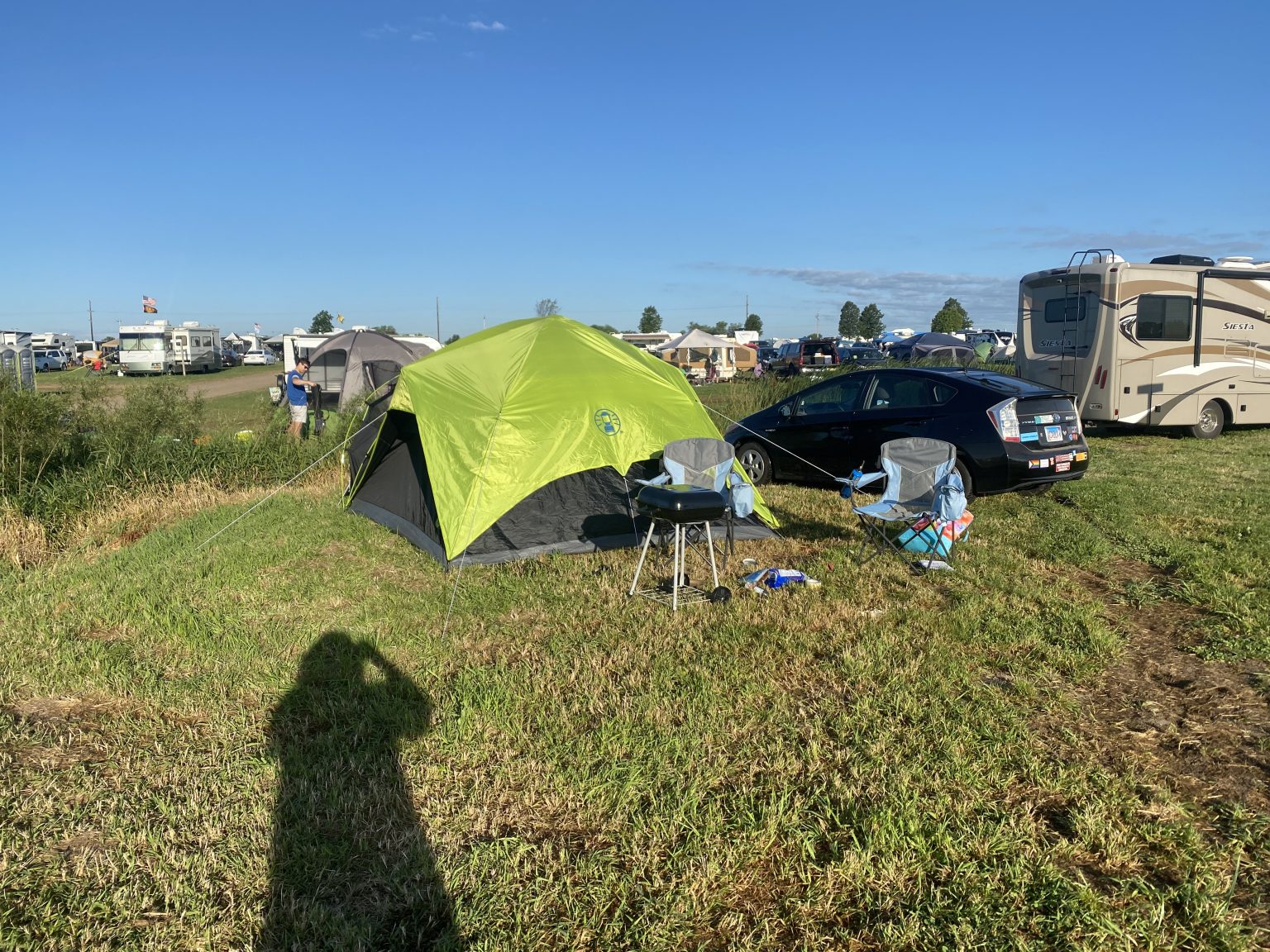 Sure, we buy gallons of water. Sheryl is able to pour the water for cooking and we can wash our hands. But pouring water, even from a spigot, has always felt clunky. I’ve often felt that if there were just some way to turn these jugs into portable sinks then we’d have a massive upgrade. As it turns out, Sheryl feels the same way. I’ll pass the mic to Sheryl for an incredibly detailed explanation for why she thinks having a faucet would be a gamechanger:

As you can imagine, having a chronic gastrointestinal disease whilst being immunocompromised isn’t a good combination if you, like me, also enjoy camping. Every cut I receive can easily result in a potential infection if I don’t clean it out immediately. Every time I eat without washing my hands, I am putting myself at risk of a significant flare. Of course, I can’t haul a plumbing hook-up everywhere I go, so there is an inevitable trade-off between camping and Crohn’s safety that becomes harder and harder as I get older and the disease progresses. For example, on the last Gambler 500 that I went on with Mercy, a single bite of food turned into a partial bowel obstruction, and we didn’t have enough water, partly because our water jugs spilled out.

That’s before you get to the more, shall we say, unpleasant aspects of an autoimmune gastrointestinal condition. Crohn’s is often compared to irritable bowel syndrome, but in reality is significantly worse and, at the risk of providing too much information, more explosive. The result is that when flares occur, you’re going to need to be able to clean yourself up. With Crohn’s Disease, toilet paper and jugs of water aren’t enough. Right now, when I go camping without running water, I am in constant fear of a flare happening and meaning I basically go without clothes for the remainder of the trip.

Right now, Mercy and I basically buy a bunch of jugs of water for each trip. But whilst those help, they’re not a real solution. For one thing, avoiding infections of bacteria with an autoimmune disease really needs running water, not just a jug. For another, a lot of our small space is taken up by water, and the jugs are heavy to lug around. Even worse, I have to bring a giant jug of water with me to the porta potty, instead of just using some running water afterwards. They also have a knack for spilling, and have I said how washing yourself from a jug sort of sucks? So just being able to turn a jug into a sink with running water would be awesome.

Now, you can buy portable sinks that offer running water. Here’s one that comes with its own toilet, and here’s another that turns buckets into a table with a sink. These two are great and affordable, and the one with the toilet might be great for a camper van setup. But for something with space constraints, they might be too bulky. There’s also this, the Trail Kitchens Water Boy Camp Sink.

This thing is basically your kitchen sink from home, but on the road. It’s a self-contained camping sink that pressurizes water to residential levels. And it can even provide heated water. Plus, it’s compact, perfect for car camping. But at $599 it’s a pricey bit of kit.

This is where RV equipment supplier Dometic comes in. The company has been branching out into the DIY and car camping space with its Dometic Go lineup of equipment. You can get camping furniture and appliances that fits into the back of a car. For dispensing water, it starts with the HYD J11 Hydration Water Jug. The rotomolded jug holds 11-liters of the good stuff.

Features include a spigot and a quick-connect attachment for things like water purifiers and filters. There are two openings on top for dispensing, cleaning, and filling. And there are guides for tie-downs, too, so it wouldn’t get tossed about on an off-road trip. Dometic sees campers pairing it to HYD WF Hydration Water Faucet, and this is the real game changer.

All you have to do is place the faucet on top of the HYD J11 water jug, or use the hose to pull water from any source. Then push the button to have a running faucet. The faucet has a battery capable of dispensing 150 liters on a single charge, and it’s charged from a USB cable. Dometic says that the faucet pumps out water at a rate of a liter a minute. This isn’t a high pressure operation, but perfect for shaving, cooking, washing hands, or even a sort of bird bath. It even has a light for nighttime use.

Add in a simple plastic wash basin and you have yourself a better sink setup than you’ll get in camping box kits. Those sinks are often just jugs with spigots. The faucet is magnetic, so you could stick it to a vehicle or a metal water jug. It also comes with an adhesive magnetic pad so you could place your faucet on other surfaces. And like I said, you don’t even have to pair it to the J11 water jug. The hose allows you to use any existing equipment you have, or heck, you could pull from cheap jugs of water from the gas station if you wanted.

Dometic currently charges $99.99 for the faucet and $69.99 for the jug. $170 for a working sink for your car, tent, van or anything else seems like a deal. This is something that we’ll definitely be looking into before we go tent camping again. I’ll just be happy to be able to survive a Gambler 500 weekend without looking like a wicked witch by the end.

Mercedes is a lifelong fan of all things powered by an engine. When she isn't driving one of her five Smart Fortwos or her 14 other vehicles she could be found in the cockpit of a Cessna 172 or perhaps swimming in any body of water that she could find. She also has a deep love for buses of all kinds. Please send her buses. mercedes@theautopian.com Instagram: @mistymotors Twitter: @Miss_Mercedes30 Facebook.com/neonspinnazz
Read All My Posts »
PrevPreviousMy Eight Cars Are Preventing Me From Moving Out Of Detroit And I Could Use Your Advice
NextWhat This Video Of A Cop And A Firefighter Crashing On A Snowy Hill Can Teach You About Winter DrivingNext