The Volkswagen ID.Buzz Already Has A Camper Conversion Kit For Just $3,000. Let’s Take A Look

The very long awaited return of Volkswagen’s Type 2 Microbus is back and rolling around European streets. While we still don’t know nearly enough information about the Volkswagen ID.Buzz that America will be getting in the 2024 model year, there is another reason to get hyped up. A company has already developed a little camping box for the new VW van and it’s both affordable and doesn’t require a full commitment.

Thumb through the pages of Volkswagen van history and you’ll find that camping and the marque’s vans have been tied together since almost from the beginning. In 1951, Westfalia created its first camper van, the “Camping Box.” While campervan builds certainly date back decades prior, Westfalia is sometimes credited with helping to popularize the idea of making the idea of sleeping in a van turned into a camper. From there, you can find camping versions of VW vans past and present. Thus, it’s awesome to see that VW’s new electric ID.Buzz is already getting camper treatments.

The camping box for the ID.Buzz is called the BusBox 4 from a German company called Ququq, and it’s actually a neat bit of kit. 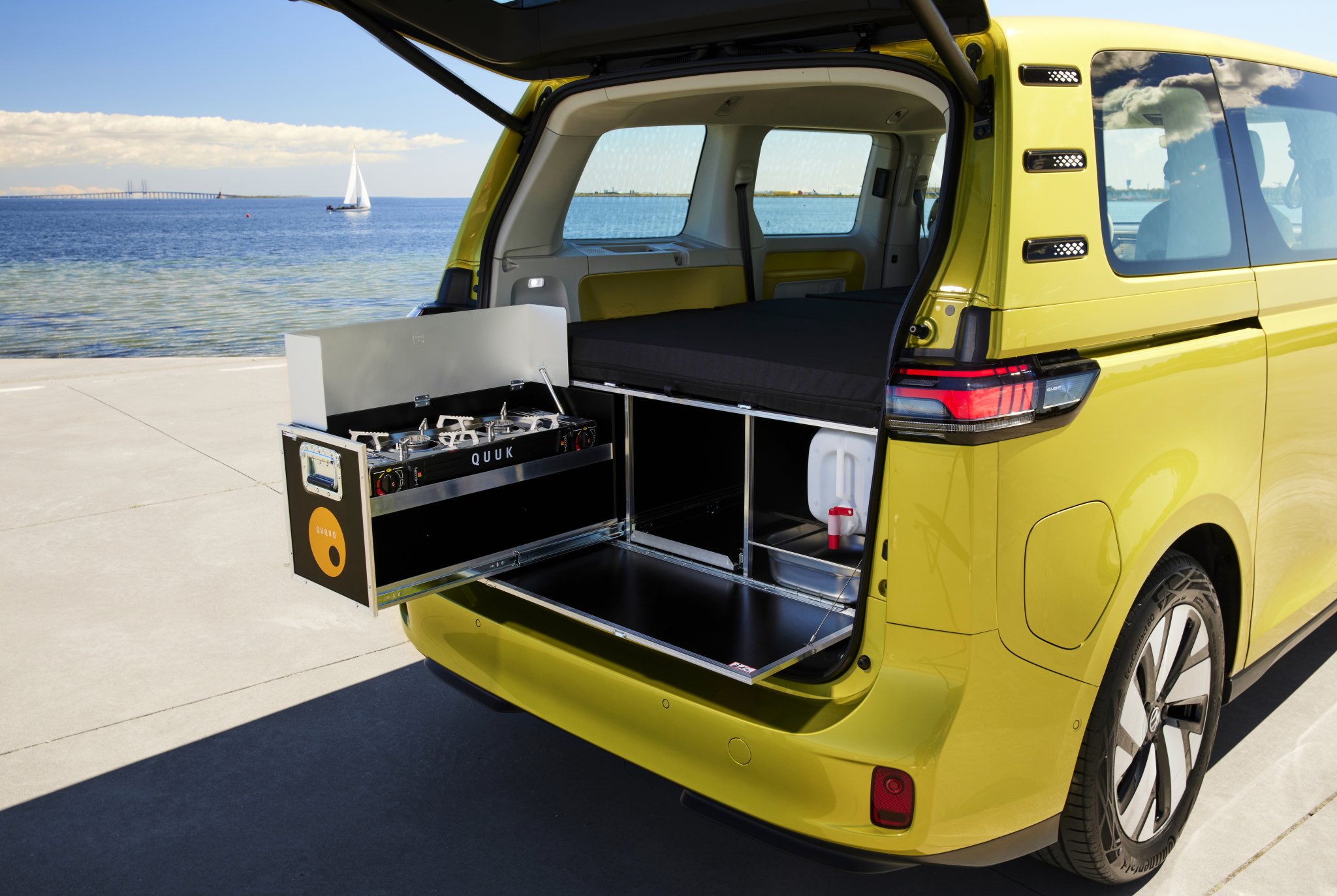 Back in 2010, Ulrich Vielmetter was looking to do a camper conversion to his Renault Kangoo. Vielmetter, a graphic designer and camper, bought materials and converted his van. As he enjoyed a family vacation in Croatia he started drawing up a design for a plug-and-play camping kit. Ququq started in 2011 and now over a decade later, it offers camping solutions for a variety of vans and SUVs. You can even get what the company calls the D-Box for the Land Rover Defender 110. Oh, and that name? In English it’s Cuckoo.

The kit for ID.Buzz is called the BusBox 4, and it’s a part of the BusBox line of Ququq’s camping kits. For the price of roughly $3,000, you get a compact black box that looks like an equipment flight case. In it, you get a small slide out kitchen. On the left is a two-burner propane-fired stove with some wind protection. On the right are two 10-liter containers for water. They empty out into a small wash basin. And in the middle is space for a cooler or small refrigerator.

Coming with the box is a folding bed setup. When traveling, the bed is folded on itself in the back of the van. But when it’s time to camp, you just fold the ID.Buzz’s second row then unfold the bed. This folding bed measures in at 49 x 77 x 4-inches and seems to fill the ID.Buzz’s rear space pretty well. Ququq says that this is a cold foam mattress with cotton bed coverings on top.

What I love about this is that it converts a van or SUV into a camper in only the time it takes for you to lift the components into the back. Ququq says that the box weighs 110 pounds while the bed setup comes in at 55 pounds. So, you might need a buddy to help you get it in and out. But that’s your setup. And converting your vehicle back into a van is as easy as lifting it back out. 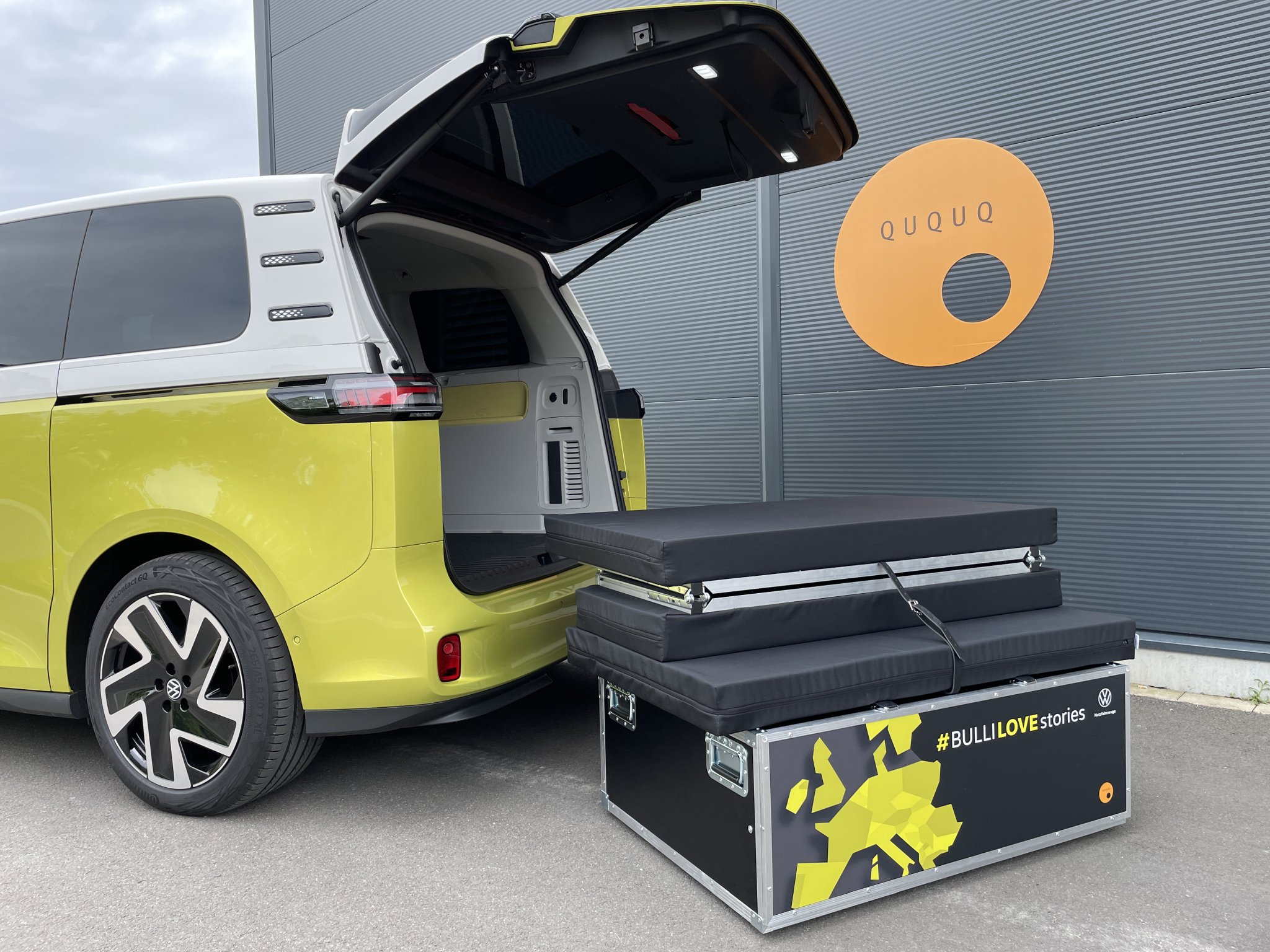 Ququq says that the BusBox 4 has been through a lot of testing. It’s traveled some 21,750 miles around Europe in the back of a van. It also got used for 80 nights in all sorts of environments. As of right now, the BusBox 4 is made for the short wheelbase ID.Buzz found in Europe. It’s still unclear what the exact dimensions of the longer, presumably three-row U.S. version of the ID.Buzz will be. But, I bet that this could probably be adapted to work.

Ququq has thought about what happens when things don’t fit exactly right. That bed comes with its own legs in case you have to take out seats to make things work. 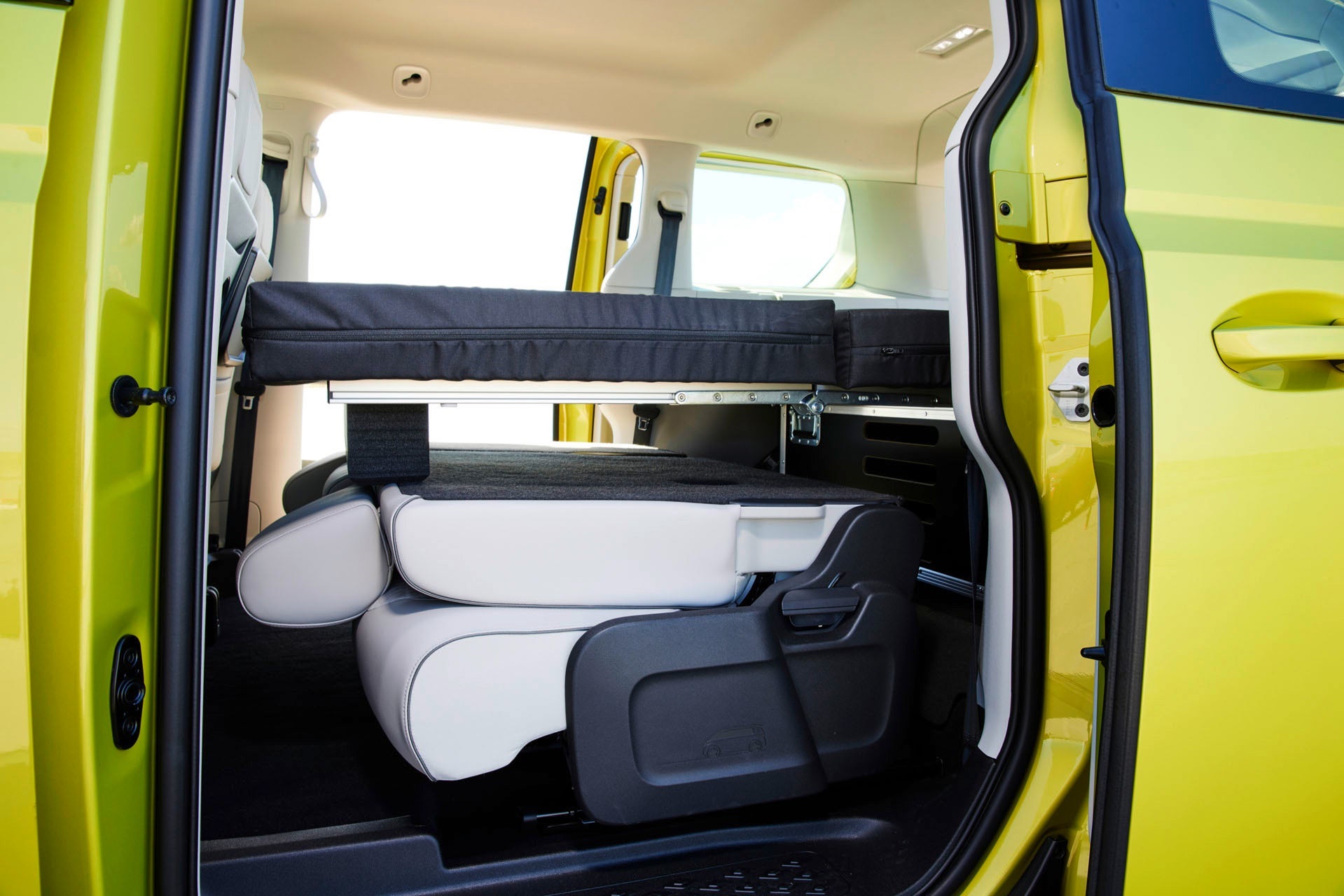 Sadly, you don’t get a bathroom of any kind. But that could be rectified with a portable toilet and an outdoor shower.

Ququq sells its BusBox kits for roughly $3,000 before shipping, and the ID.Buzz version is expected to begin shipping next month. The company doesn’t quote shipping rates to the United States, but I bet it wouldn’t be horribly expensive.

And perhaps even better is the fact that Ququq already makes BusBox kits that Americans can use right now. The company says that its BusBox variations cover 80 different vans. Those include the Fiat Ducato (Ram ProMaster), Ford Transit, Mercedes-Benz Sprinter, and Volkswagen T4 (EuroVan). And since the company helpfully publishes the BusBox’s dimensions, I bet you could pair the box up to other American vans, too.

Mercedes is a lifelong fan of all things powered by an engine. When she isn't driving one of her five Smart Fortwos or her 14 other vehicles she could be found in the cockpit of a Cessna 172 or perhaps swimming in any body of water that she could find. She also has a deep love for buses of all kinds. Please send her buses. mercedes@theautopian.com Instagram: @mistymotors Twitter: @Miss_Mercedes30 Facebook.com/neonspinnazz
Read All My Posts »
PrevPreviousThe Used Car Market Is Still So Tight That Nissan Will Now Sell You A Decade-Old Certified Pre-Owned Altima
NextWatch Jeremy Clarkson Off-Road The Rubicon Trail In The Beloved Jeep Wrangler YJNext