Okay, okay! Since David raised such a stink about both of yesterday’s cars being automatics, today we’re looking at a pair of cars from the same basic class, only with three pedals each. But first let’s see which slushbox you hated less:

Looks like the Plymouth Neon is the winner. That’s “Plymouth,” with a P. And an R and an N and a D and so on, which I guess was the problem.

Now first, let me say that I am in absolute agreement with David (and half the commenters). Small cars especially should have manual transmissions. But while David is still young enough to crawl around under cars in junkyards and then hop in a manual truck and drive home without feeling like he’s been worked over by a Vegas bouncer, I’m old enough to be his… um… cool uncle, and I have the arthritis and stiff knees to prove it. I own three cars, and they’re all manuals, but I can’t guarantee the next one won’t be an automatic.

But then, it won’t be an economy car either, probably. So let’s see if we can take some of the penalty out of the boxes by adding some proper transmissions to the mix. 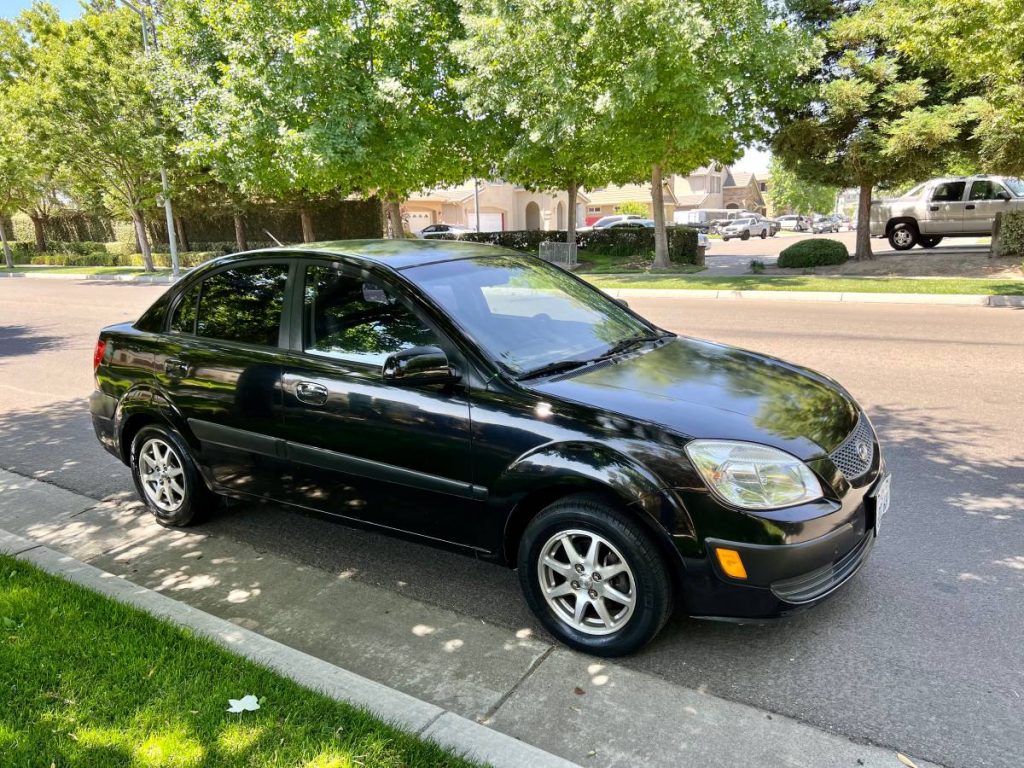 The existence of the Kia Rio in the U.S market always puzzled me. The brand already sold the Sephia (that’s the Spectra in the U.S.), a small cheap car, and then decided to import the Rio, an even smaller, cheaper car. 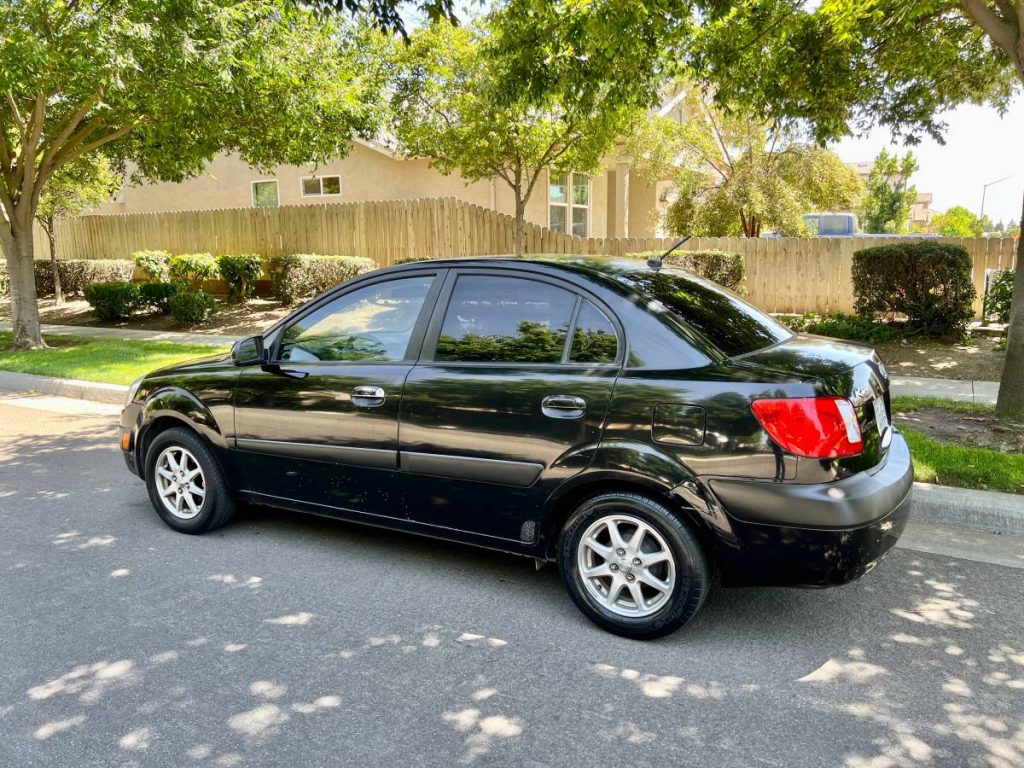 This second-generation Rio is a true “poverty spec” machine: no air conditioning, no power features, nothing but an engine, some seats, and an aftermarket radio. Even in 2008, this would have been the plainest of plain-Jane cars, appealing only to the the most frugal of car shoppers. To drive a black car without air conditioning in Modesto for 150,000 miles just to save a few bucks speaks of an automotive asceticism bordering on self-loathing. One can’t help but wonder how much sweat is soaked into that cheap upholstery.

[Editor’s Note: I bought my brother’s girlfriend the cheapest car in the U.S. in 2009, the Nissan Versa, and learned while changing the serpentine belt that there was no compressor and that someone had replaced the HVAC controller to make it appear that the car had A/C. It did not. And it was black. My brother’s girlfriend is now in Arkansas sweating bullets because I’m a fool. -DT] 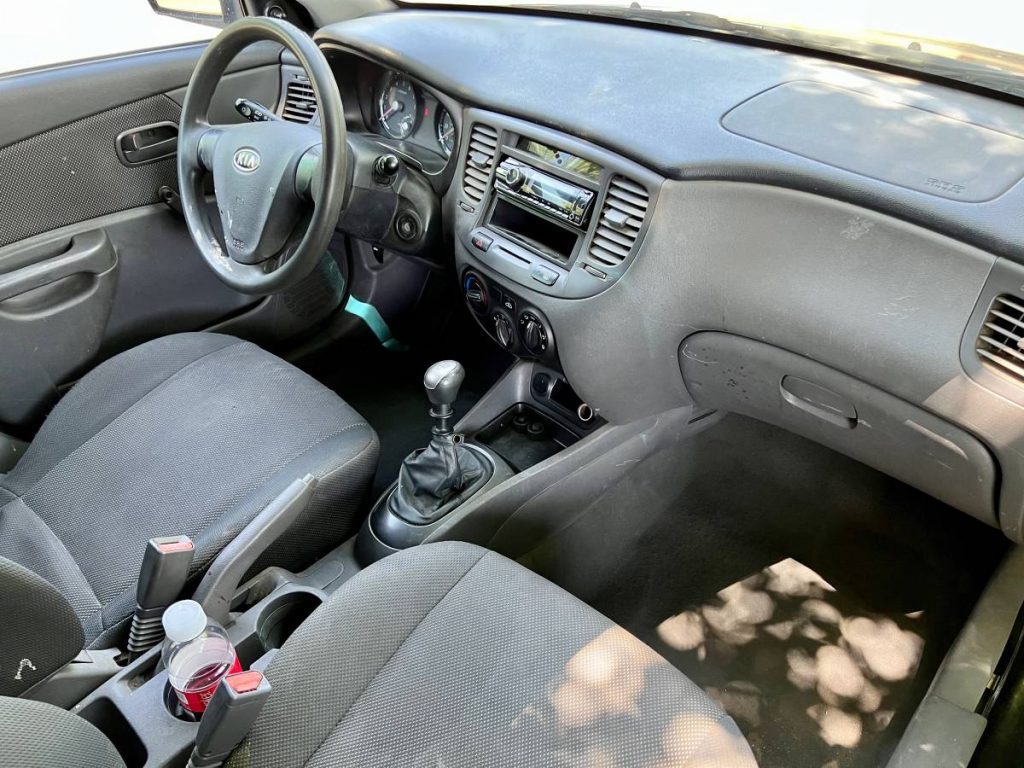 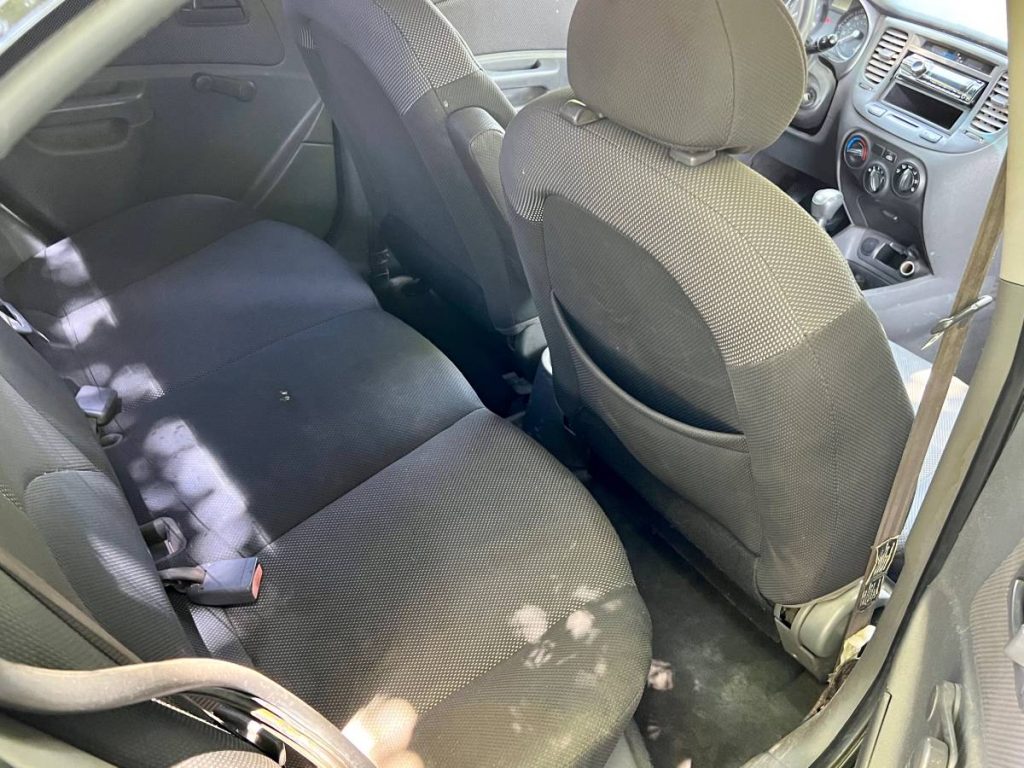 But it looks like it has been well cared-for, and the seller says it runs and drives well, and the registration is current, which is always a good sign. And as always, less stuff is less stuff to go wrong. This car probably wasn’t worth ten or eleven grand when it was new, to be honest. Is it worth two now? You tell me. 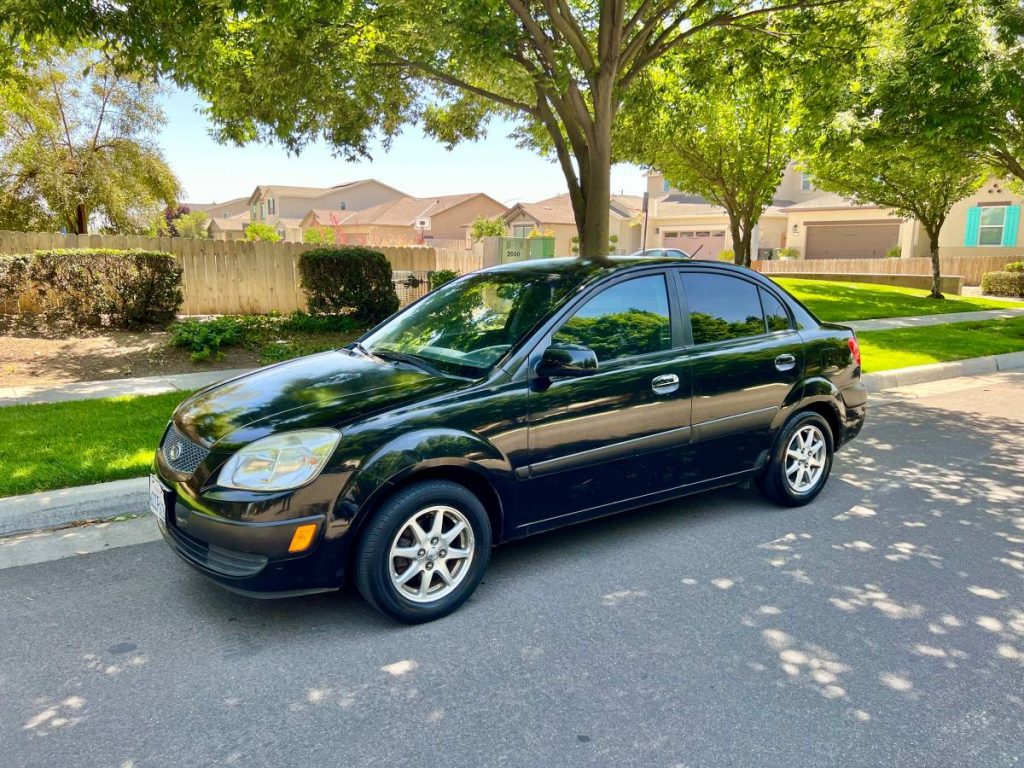 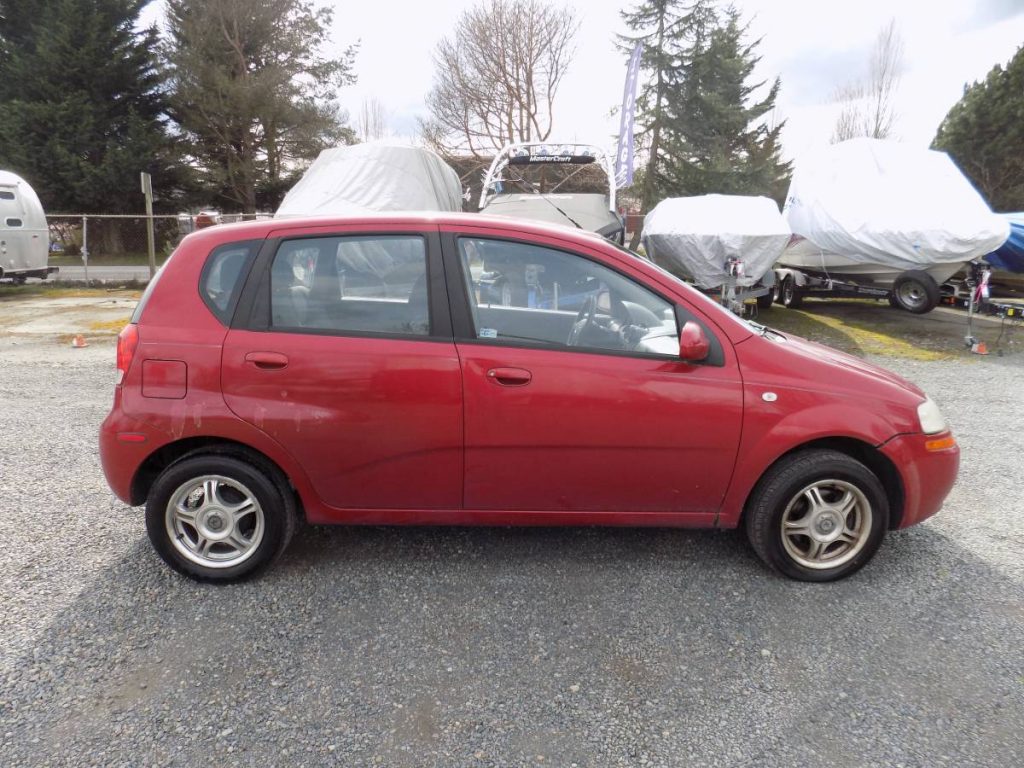 The failure of small hatchbacks in America seems to be a self-fulfilling prophecy. We rarely get the good stuff, and when we do, it doesn’t stick around long; witness Ford’s withdrawal of both the Fiesta and the Focus from the US market. Back in 2006, when General Motors was launching the Opel/Vauxhall Corsa D in Europe and the UK – a delightful little car; I drove one from London to Edinburgh and back in 2012 – they saw fit to instead saddle the American market with a study in mediocrity called the Aveo. 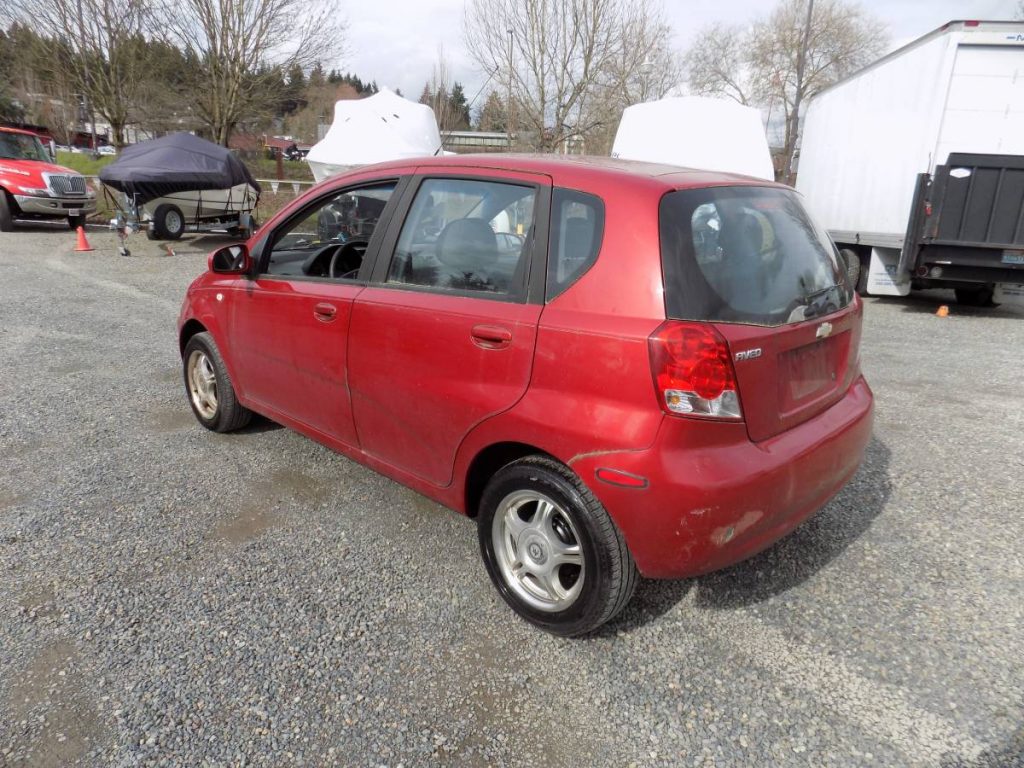 It’s not a bad little car, exactly; it’s just not good. I’ve never owned one, but I have test-driven a couple of them, and honestly barely remember a thing about them. On paper, and in photos, it looks like it should have the right stuff: it’s tiny, has a twin-cam engine and a five-speed stick, and it doesn’t look half bad. But the whole is somehow less than the sum of its parts.

At least it has a tach. 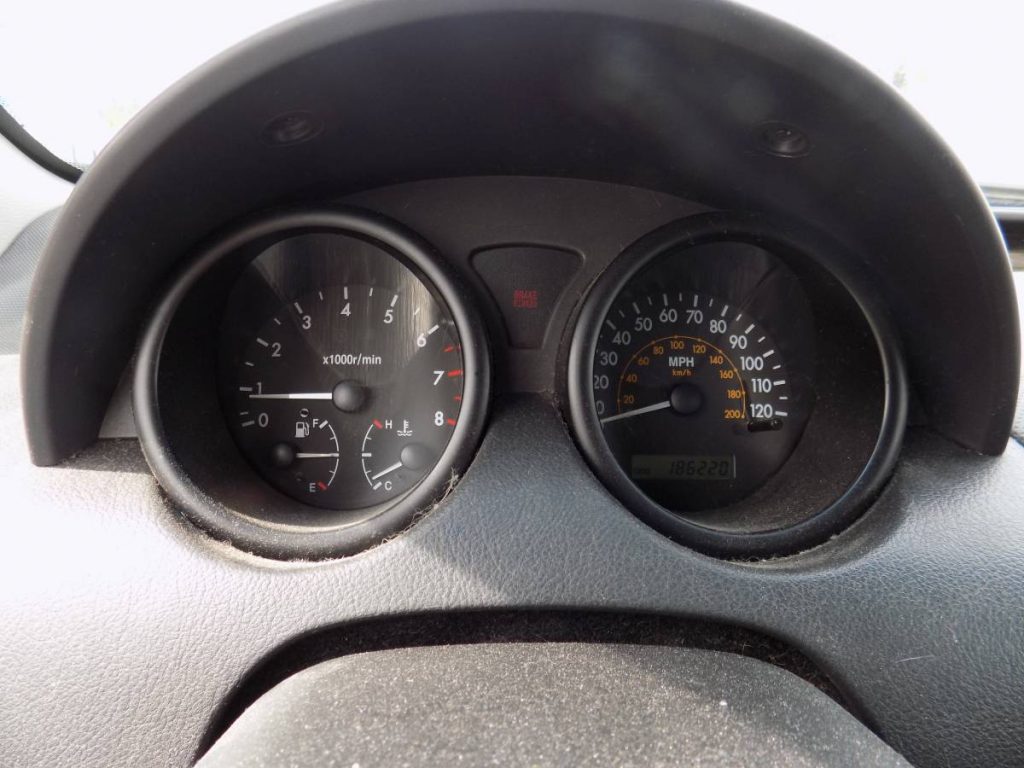 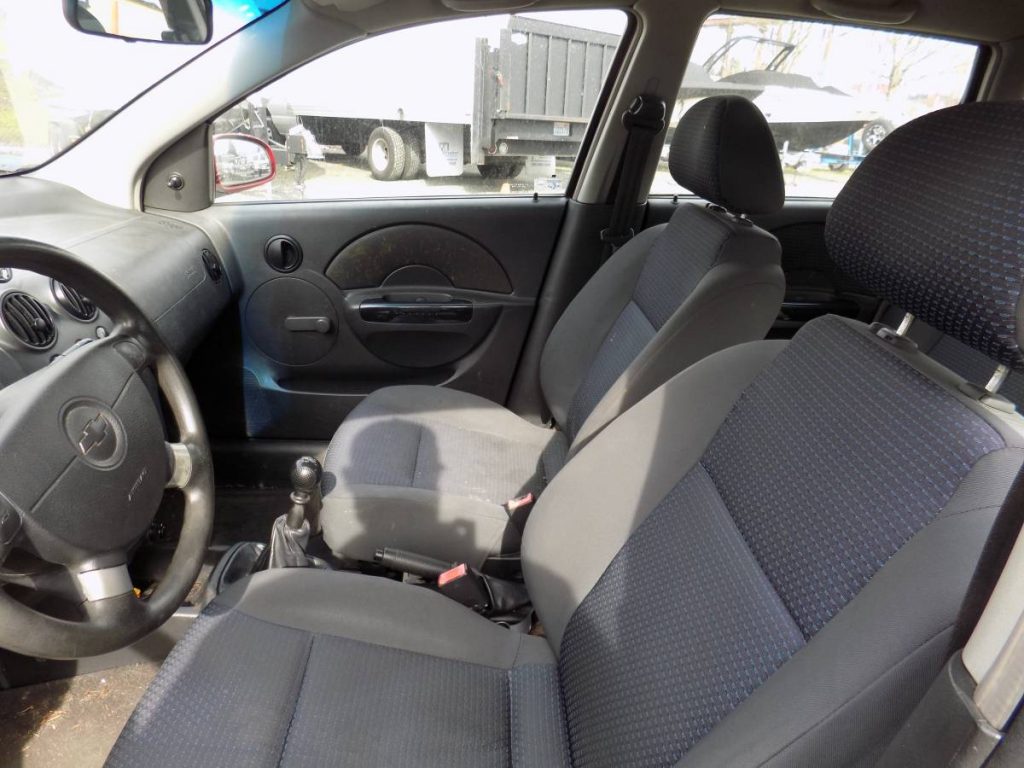 This Aveo looks all right, but there are some disturbing-looking stains on the door panels. Not sure what that’s about. A few dings and scrapes tell a tale of parking lots past, but the paint looks decent. It does have a lot of miles, but I have heard that these follow the grand GM tradition of running like crap forever. The aftermarket alloy wheels are a nice touch. 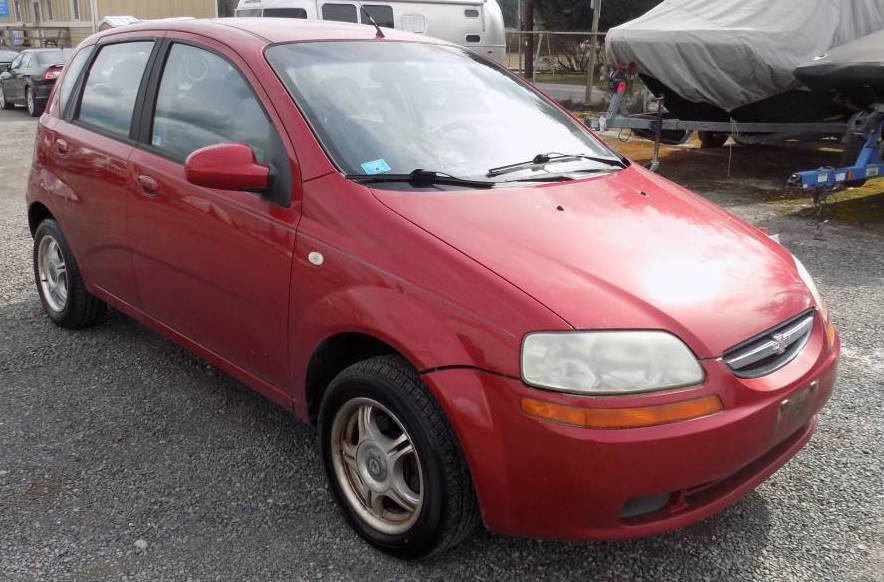 There isn’t a whole lot to recommend either of these beyond having manual gearboxes, but if you don’t want a Corolla that has been to the moon, or a Civic that has been attacked by a Pep Boys accessories aisle, something basic and Korean might just do the trick. I’ll leave it to you all which one is the better choice.