Dune Buggies, especially old-school air-cooled Volkswagen-based dune buggies, tend to have a pretty specific aesthetic. It’s an aesthetic that I like and respect a lot, but it’s also one that tends to be very rarely deviated from. That’s why when I saw this fascinating VW-based dune buggy for sale, I my attention was grabbed, like the last brownie on the tray. This car, built on a 1969 VW Beetle pan and called the Smisek Dune Buggy, is a really novel and unexpected take on the fiberglass dune buggy,  but somehow manages to still comfortably fit into the overall category. Let’s look at this thing.

From what I can tell, this buggy, which also seems to be called the Stark, originates back in 2011, as a design project from Brandon Smisek, who has been posting photos from the earliest stages of the project, including the initial design sketches and foam models. According to Smisek’s Instagram, he’s a clay modeler for Kia, which explains why he seems to be so damn good at this: it’s his job. 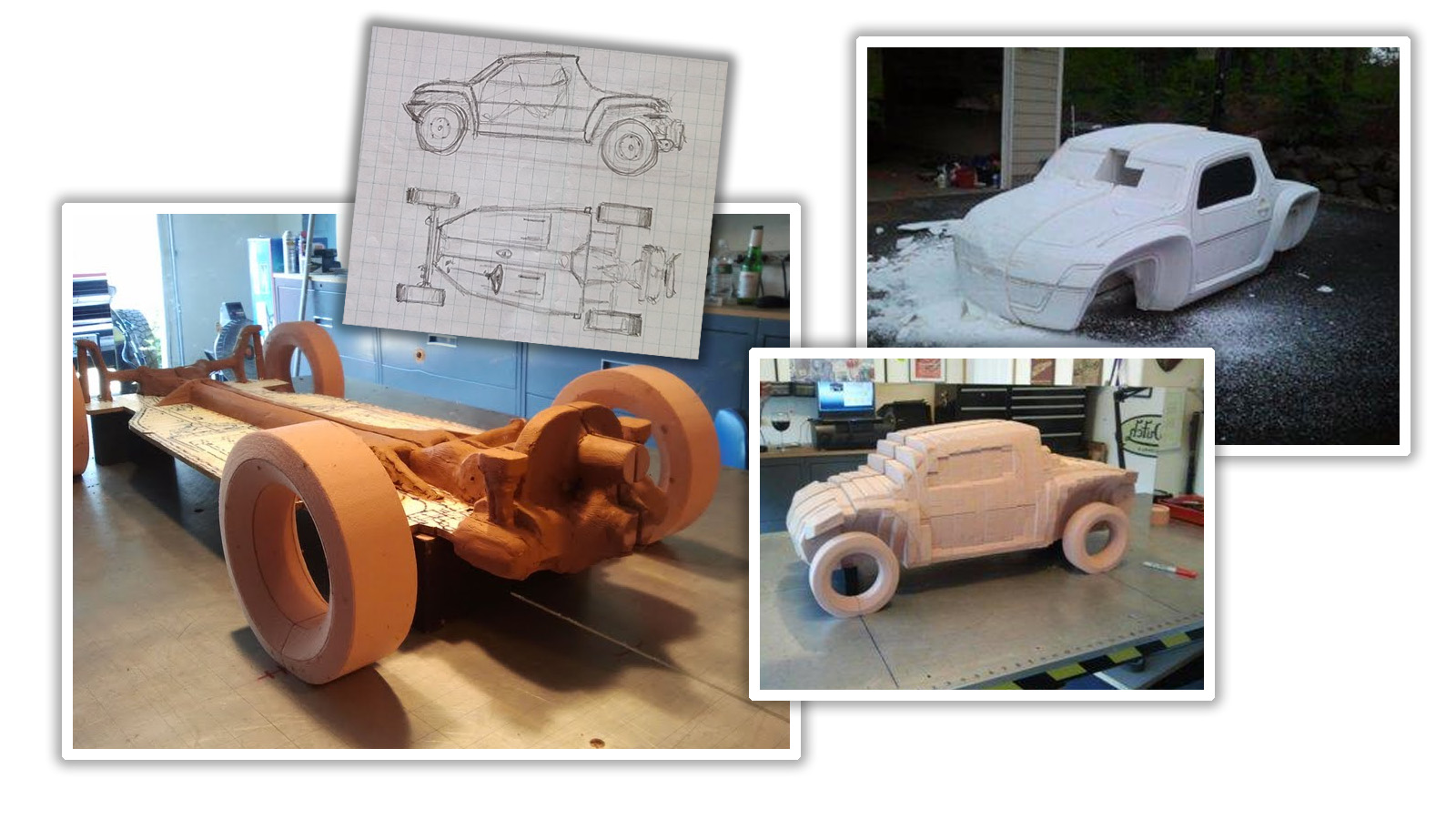 The final design is very clever and sleek, I think. It feels modern, but has certain cues that still have a bit of old-school dune buggy/VW-ness, all without being even remotely retro. The very open and flared wheelarches evoke classic fiberglass dune buggy shapes, the door hand’s hemispherical indentation somehow reads very Volkswagen, the grille-less front end with the vaguely U-shaped indentation ever so slightly suggests a Baja Beetle’s blunt nose and hoodline, and yet the whole shape reads more pickup truck-like. 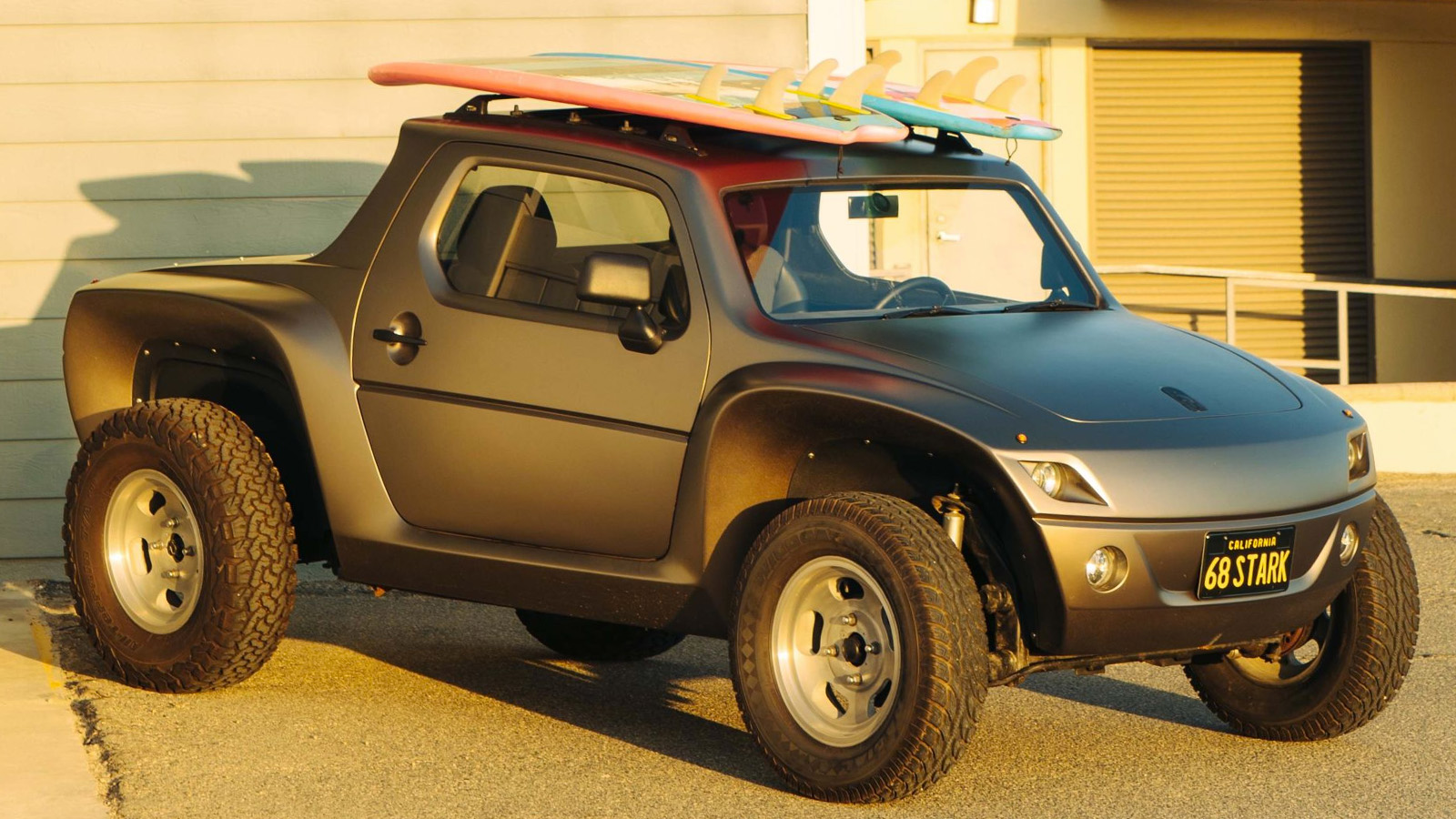 The packaging is clever in a practical way, too: there’s storage up front, under the hood, and there also appears to be a rear compartment over the transaxle, as well as what looks like an actually useable back seat – something not common at all in most fiberglass dune buggy kits. 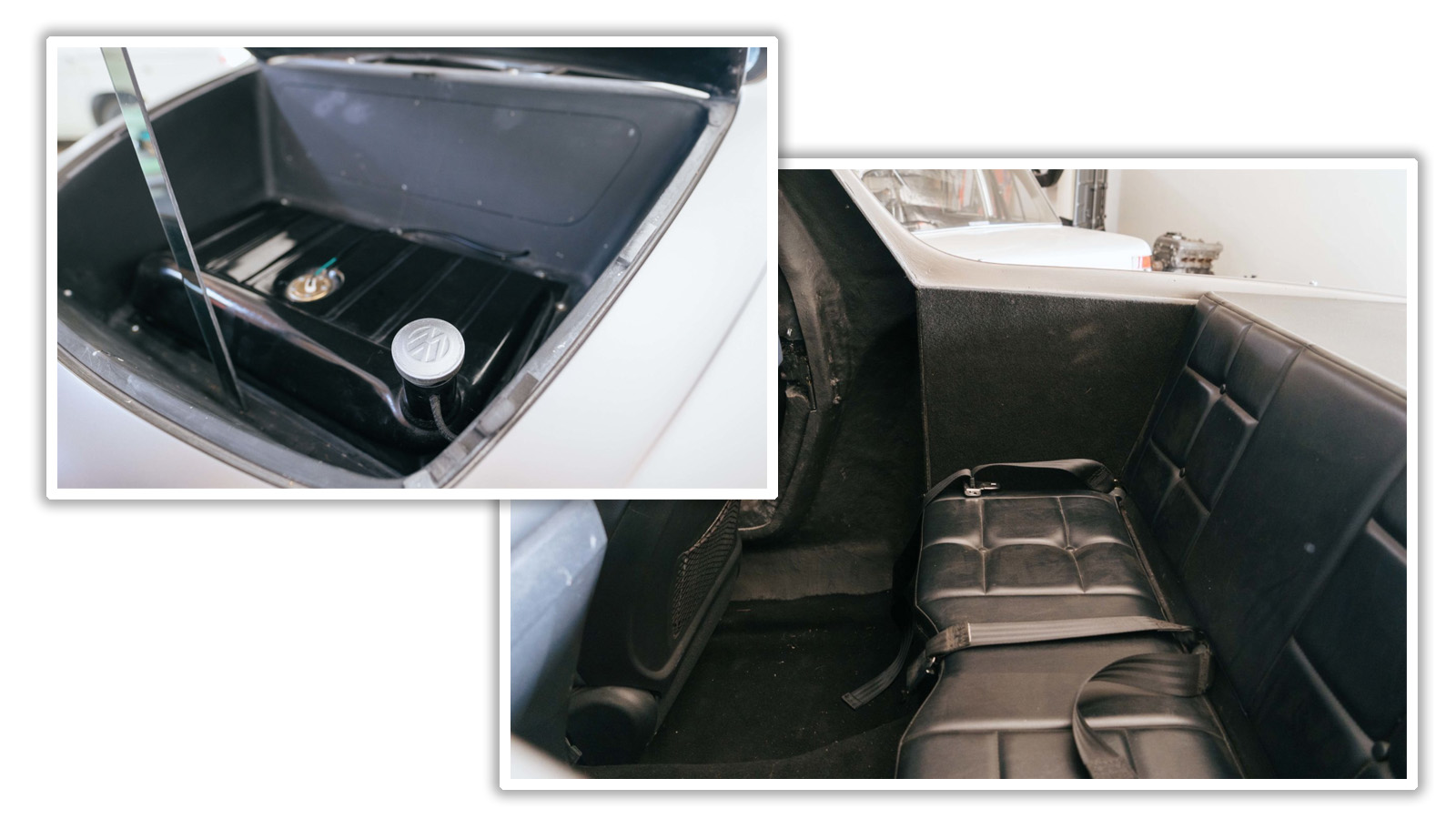 The Stark made a bit of a splash back around 2013, when Smisek seems to have finished the first one, with plans to sell these as kits by 2014, plans that don’t seem to have actually come to fruition. There were magazine articles about the car and everything: 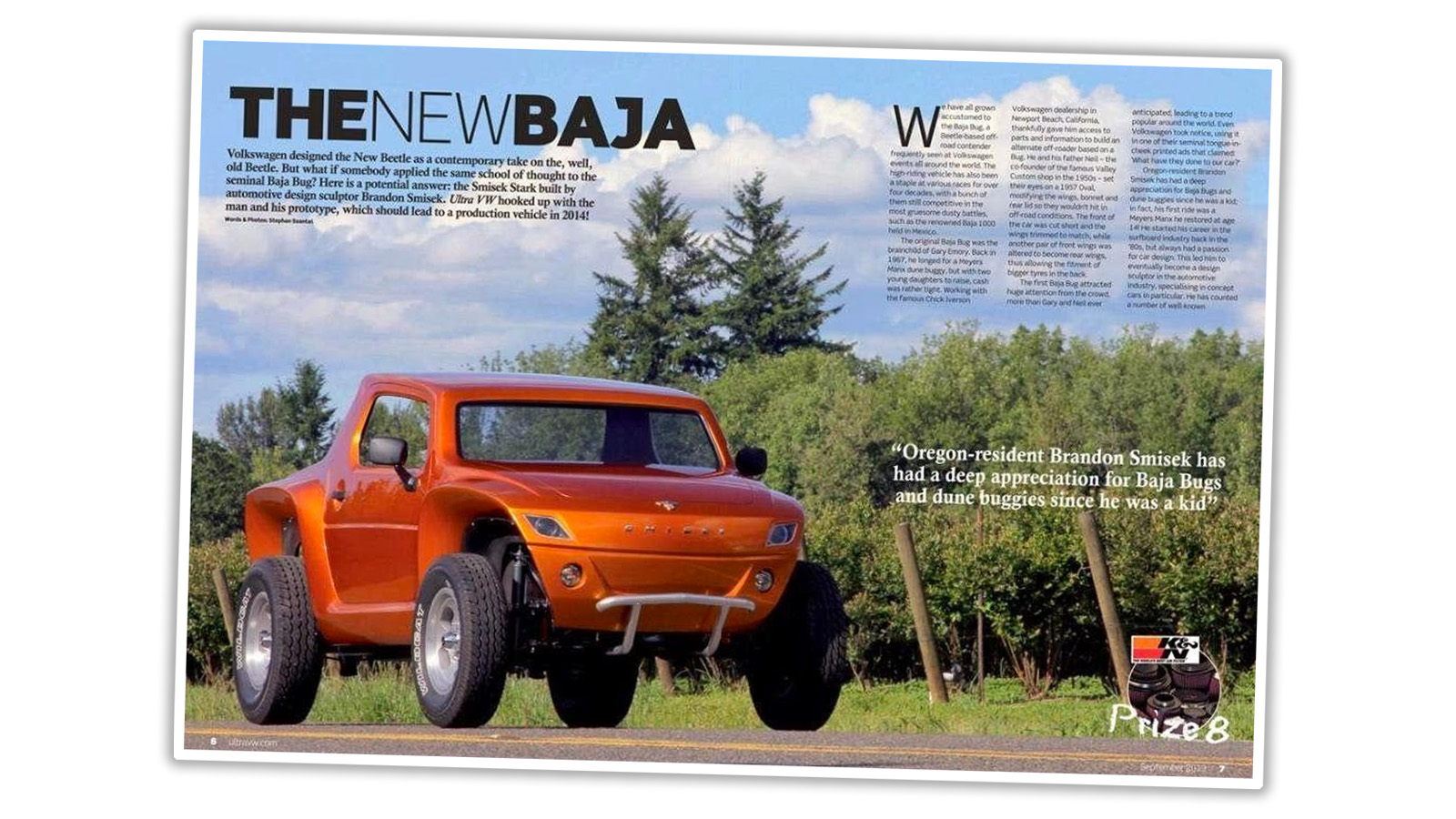 The magazine stories report how Brandon built the car in his own, one-car garage, starting with his quarter-scale clay models, and planning on using an uncut, stock VW chassis, as opposed to, say, a Meyers Manx-type of build that requires cutting the chassis. 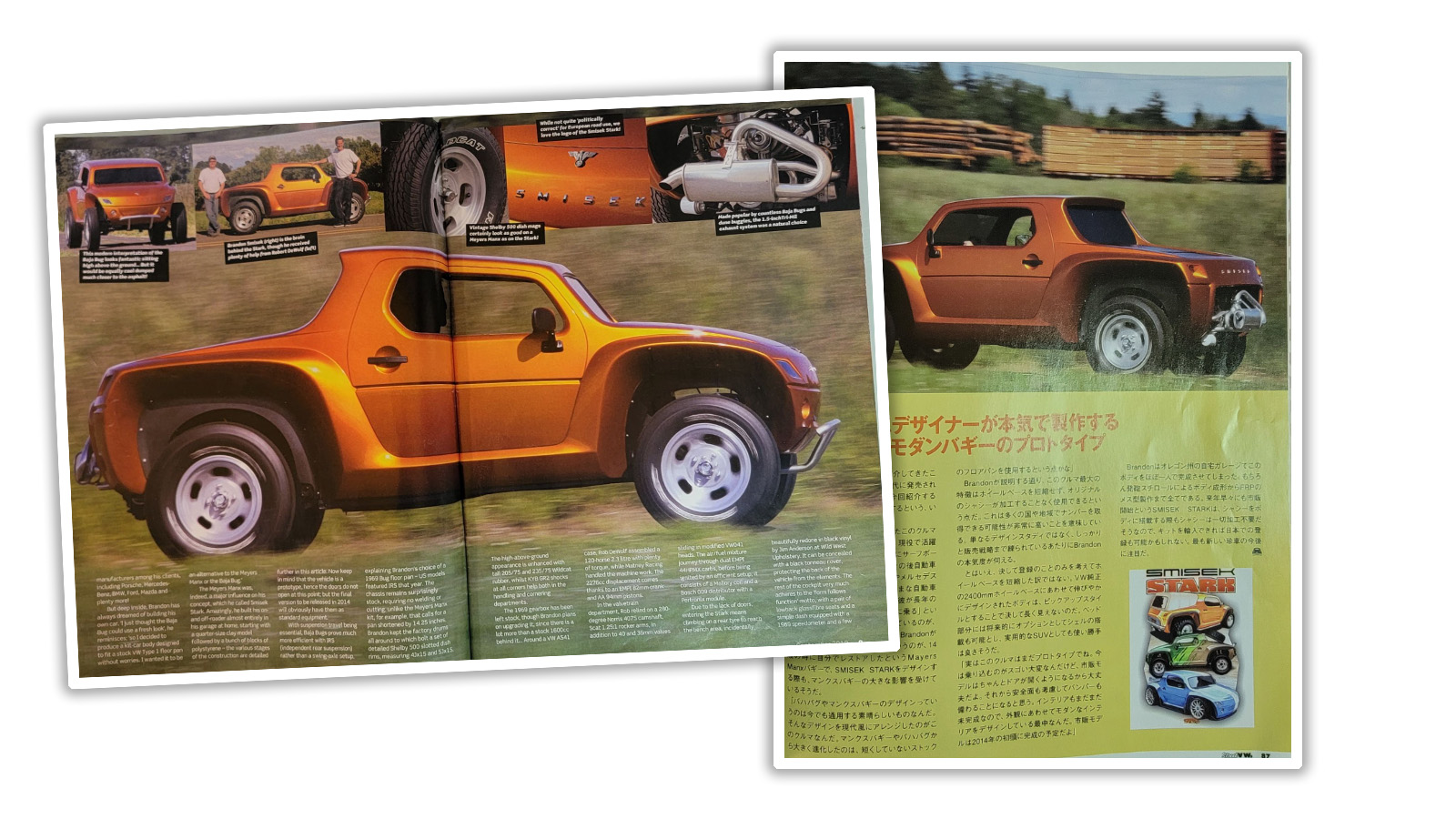 Brandon also had plans for a camper shell for the Stark, which is being sold with the car, albeit in a pretty unfinished state. The design also seems to have changed to include a porthole window instead of a longer, tapered-rectangular one: 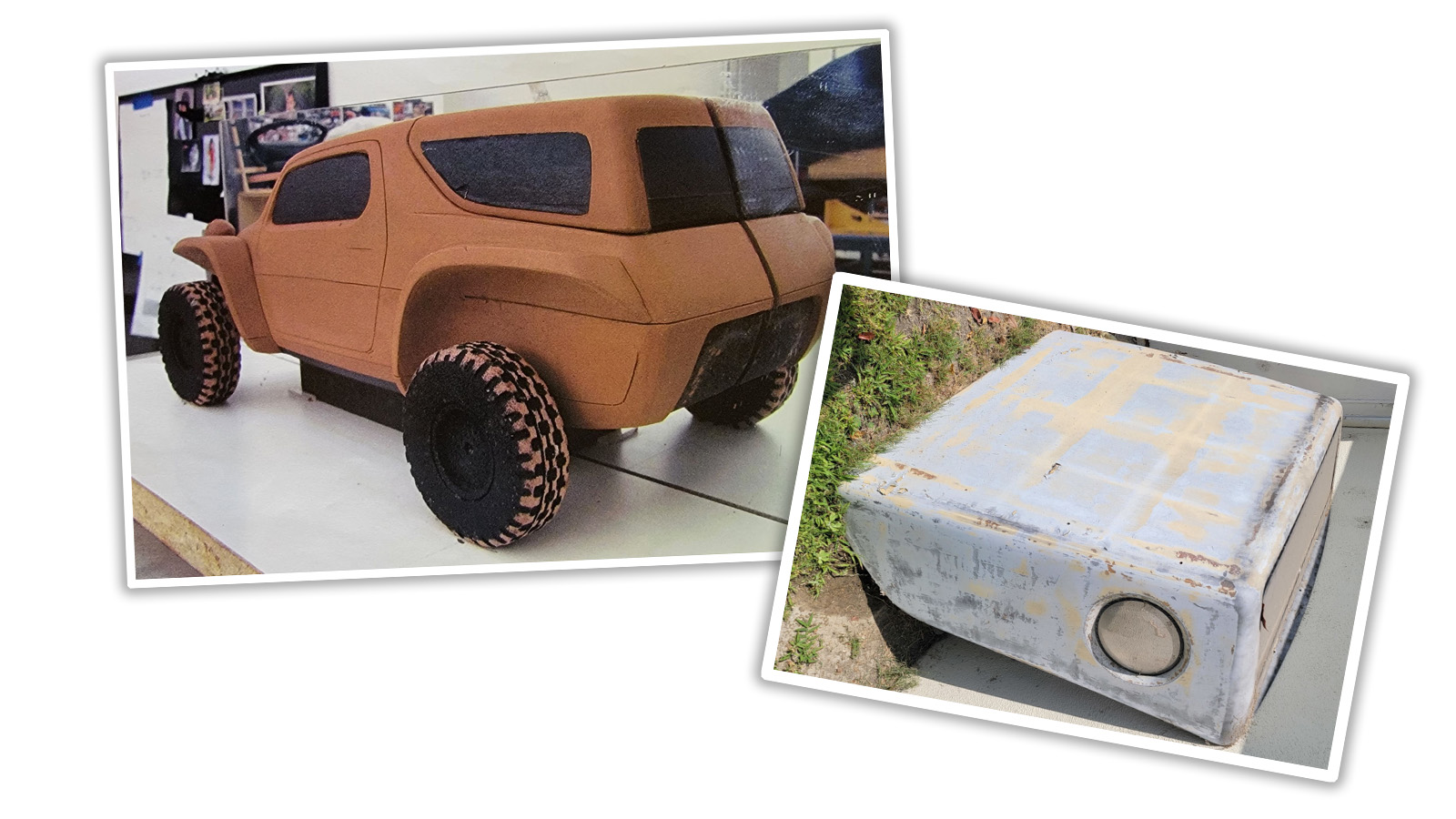 Mechanically, it’s all straightforward old-school VW stuff. The engine’s been uprated a bit with some more displacement and a bigger carb  (1835cc dual-port and a double-barrel Weber carb) and has headers and pretty much all the usual Baja Bug-type upgrades, nothing exotic. 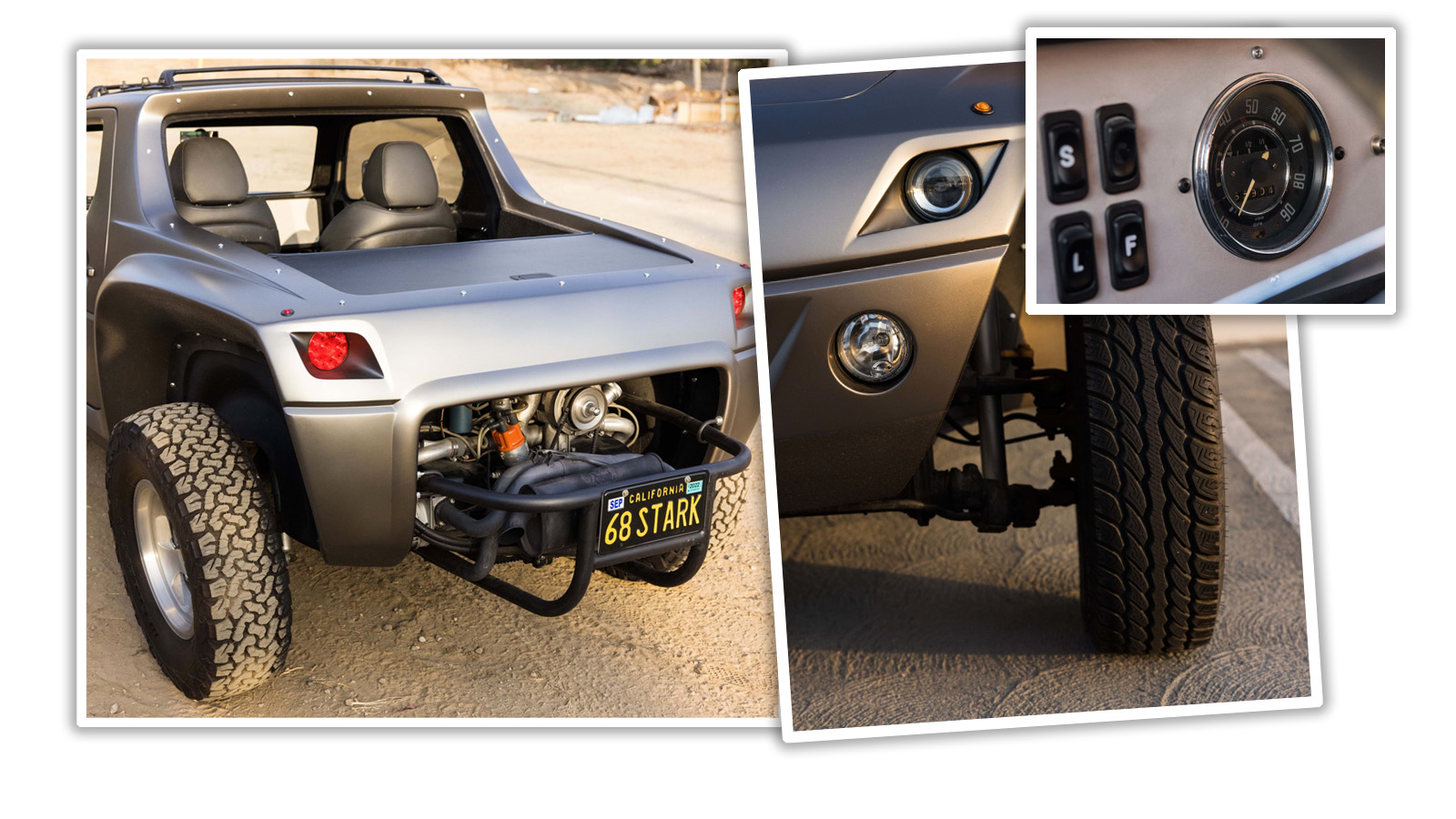 I do like the visual contrast of that old Beetle speedo set into this very modern-looking body design, too.

Two cars have been built – the first car, which is the one for sale, the one that used to be orange, and another one, which, according to posts on The Samba, was built by Rob DeWolf, who is currently in possession of the fiberglass molds, and seems to have built his on a 1970 VW chassis.

That car can be seen in a state before its final paint here:

…and now sports a glossy-mossy green and black look: 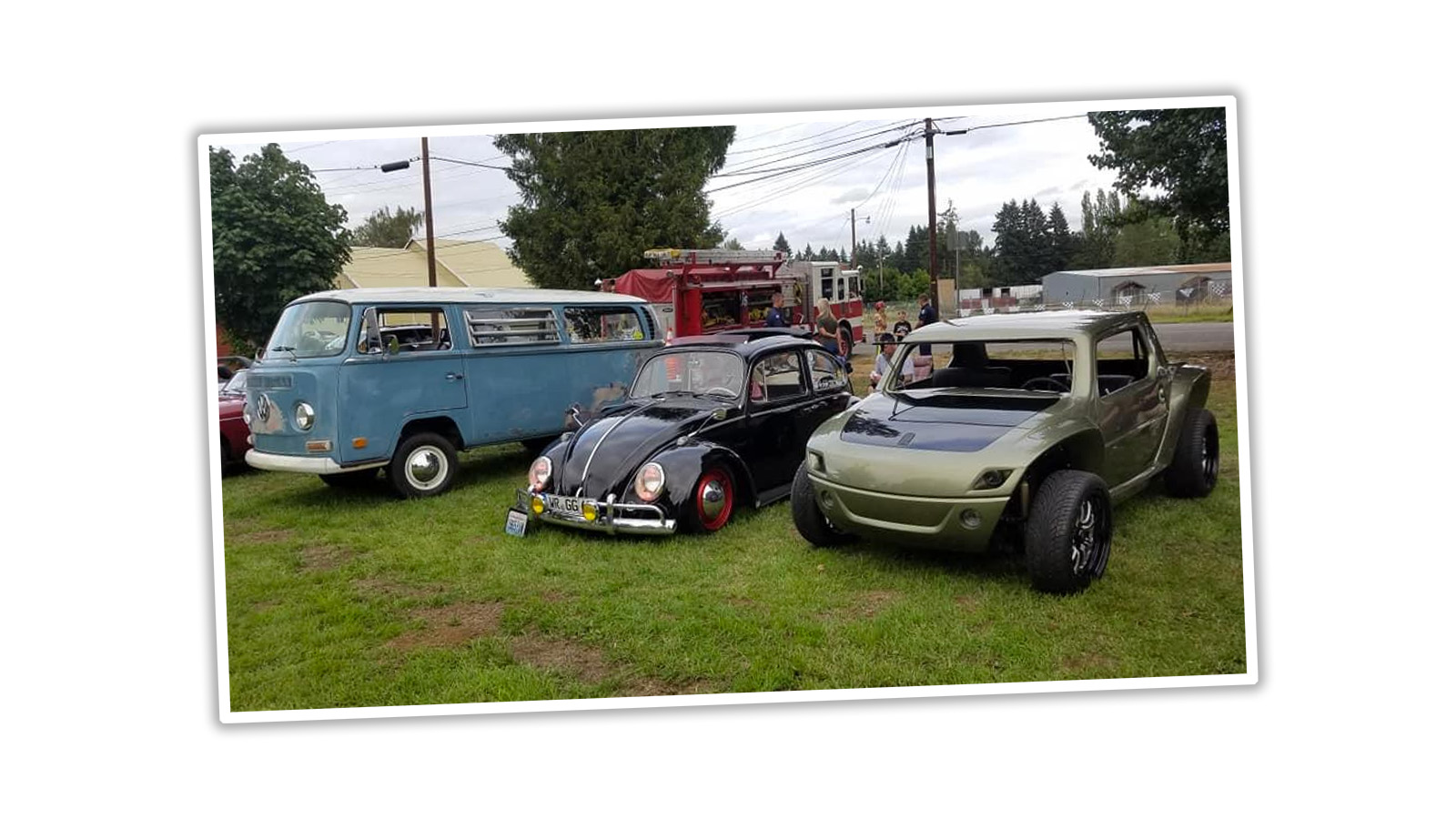 As of my writing this, the auction is only up to $6,000, but there’s still over a week to go. I think this is a really interesting take on the VW dune buggy concept, and I hope it goes for decent money, because it’s clear that a lot of effort and attention and care went into this build.

I’ve reached out to Brandon for his thoughts on the auction and to find out more about his thinking when designing this, and will update if I hear back. I did find at least one recent comment from Smisek on The Samba, responding to some criticisms of his design: 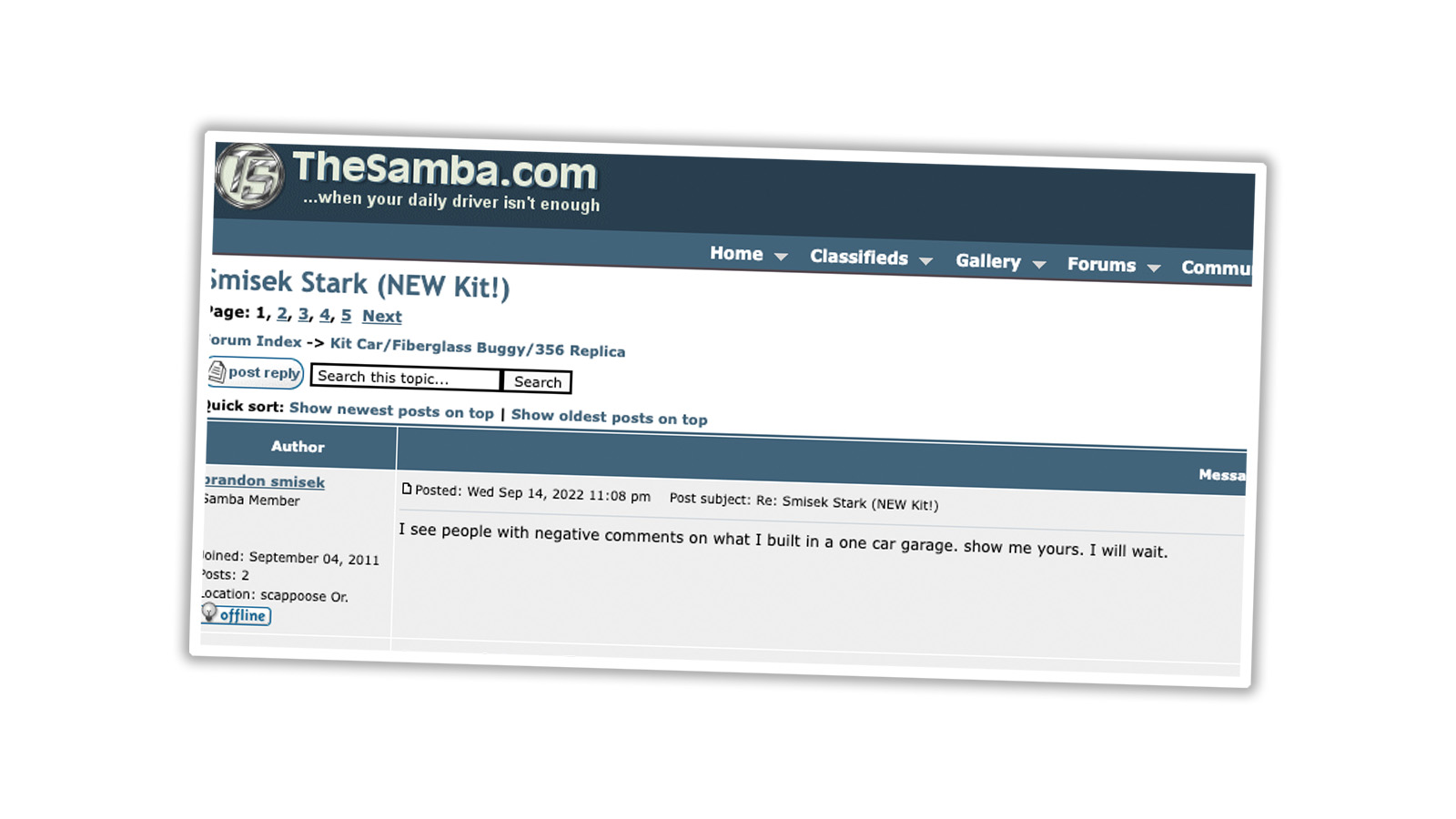 Yeah, there’s not shortage of jerks on the internet. While everyone is absolutely entitled to an opinion, Brandon here has a point. Besides, I think the design is bold and exciting, but, as someone who has received plenty of internet criticism, I know it’s always the shitty comments you remember. Don’t let it get to you, Brandon!

I'm a co-founder of the Autopian, the site you're on RIGHT NOW! I'm here to talk to you about taillights until you cry and beg me to stop, which I absolutely will not. Sorry. Hug? Also, David's friend.
Read All My Posts »
PrevPreviousThe NM Concept Is A Miata That’s Somehow The Most Miata
NextBarbie Dream Moped: Cold StartNext