Our Daydreaming Designer Imagines A Rotary-Powered, Italian-Designed Sportscar That Never Was

Did you wake up a little cranky this morning? Did things not feel quite right? Are you just getting a little sick of all the bullshit? Do you suspect it’s because German carmaker NSU is gone, and has been gone since Volkswagen bought it in 1969, then merged it with Auto Union, only to rename “Audi Auto Union NSU” to simply ‘Audi AG” in 1977, putting the NSU name to rest forever? I bet that’s why. I can’t bring NSU back, not legally at least, but I can bring you the fever-dreams of our almost-a-car-designer, The Bishop, who has had a powerful, strange, and beautiful vision of an NSU rotary sports car could have been in 1976. If you’re feeling up to it, don’t have any heart conditions, and are not currently pregnant, then I invite you to experience this vision with me.

All of this really starts with a pretty remarkable car, the first car to be sold commercially with a Wankel rotary engine. That car was the NSU Spider, sporting a lovely Bertone-designed body and built from 1964 to 1967. 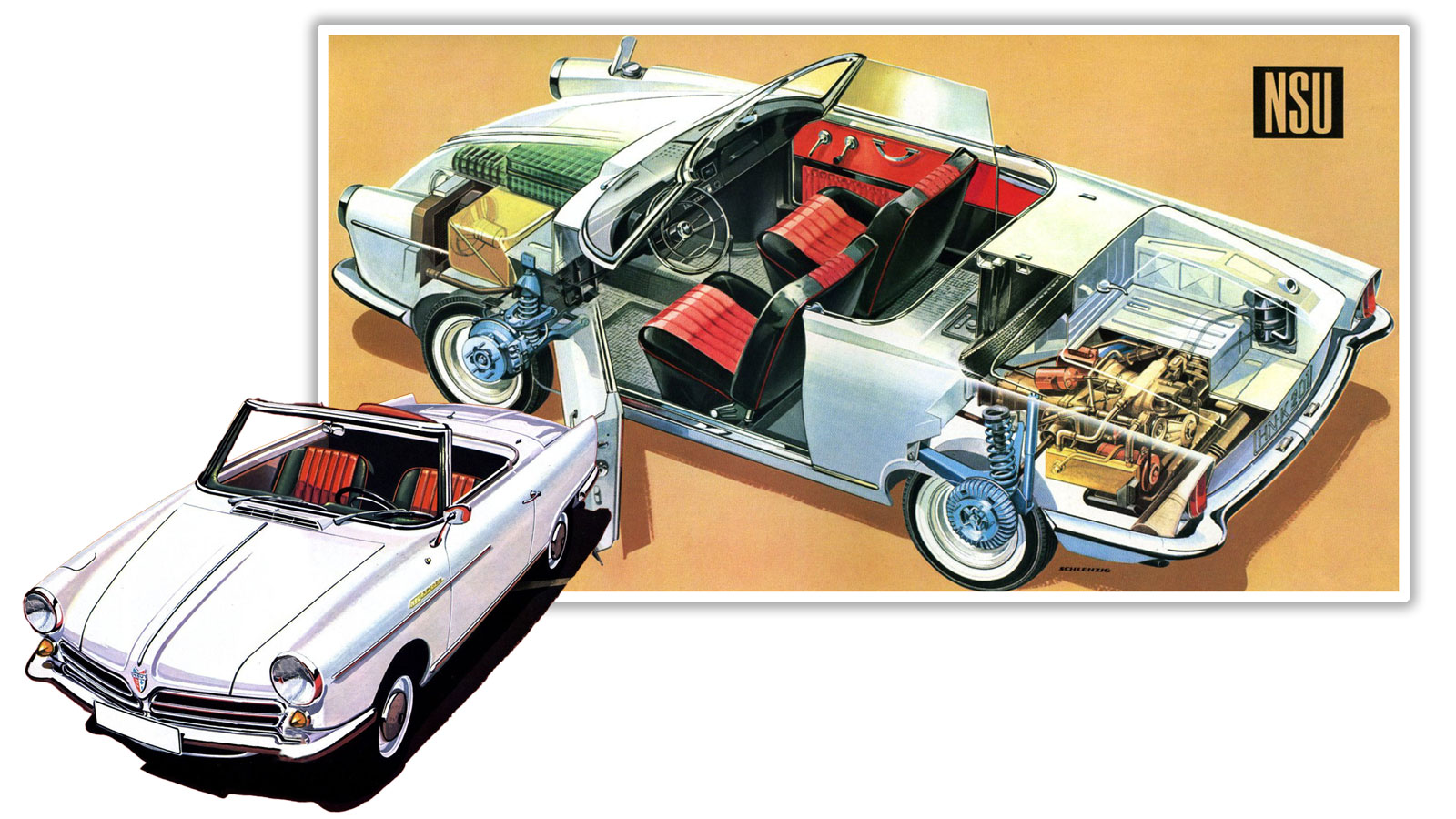 The car was charming and innovative, and in the real world, represented the start of NSU’s decline before its ultimate demise. You see, costs from the development of the Wankel engine and significant costs related to warranty replacement of bad apex seals in the company’s second rotary-powered car, the lovely and iconic Ro-80, eventually did the company in financially.

But the whole point of the Bishop is to explore what could have happened, not what did. So, let’s say in this alternate world, the rotary engine isn’t the albatross around NSU’s neck that it was in reality, but instead a glorious eagle around the neck, or some other bird that implies lifting up instead of weighing down. A heron? I don’t know (What do I look like, an ornithologist? I wish I looked as good as an ornithologist).

Let’s also say that NSU continued with its association with Bertone to design cars: What might a 1970s Bertone-designed NSU Spider have been like?

Bertone was doing some interesting, very 1970s-wedge type designs in this era, like their show car, the Trapeze: 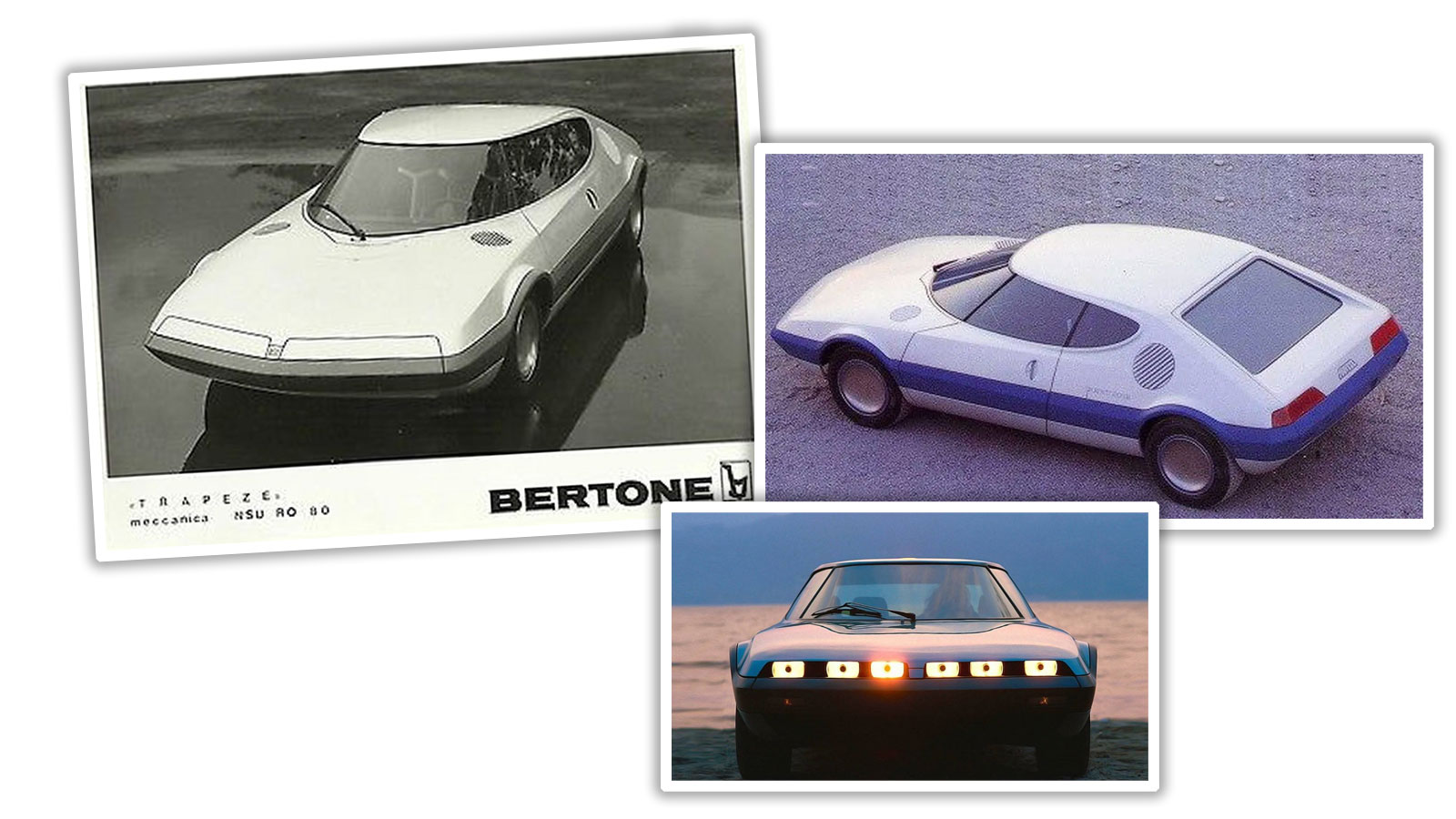 The Bishop is a bit underwhelmed by the Trapeze, though:

“I hate to say it, but I find it vaguely disappointing, particularly in light of the other shit Bertone was doing at the time.  I mean, it’s cool, but it just seems to lack that wow factor.  I also don’t see it as a production proposition since its four-wide trapezoid seating makes it a little too big for a little NSU, and the Stratos style roof is permanently fixed.  It’s certainly rather ‘normal’ looking and thus a bit underwhelming compared to concepts like the Rainbow or Navajo (shown below):” 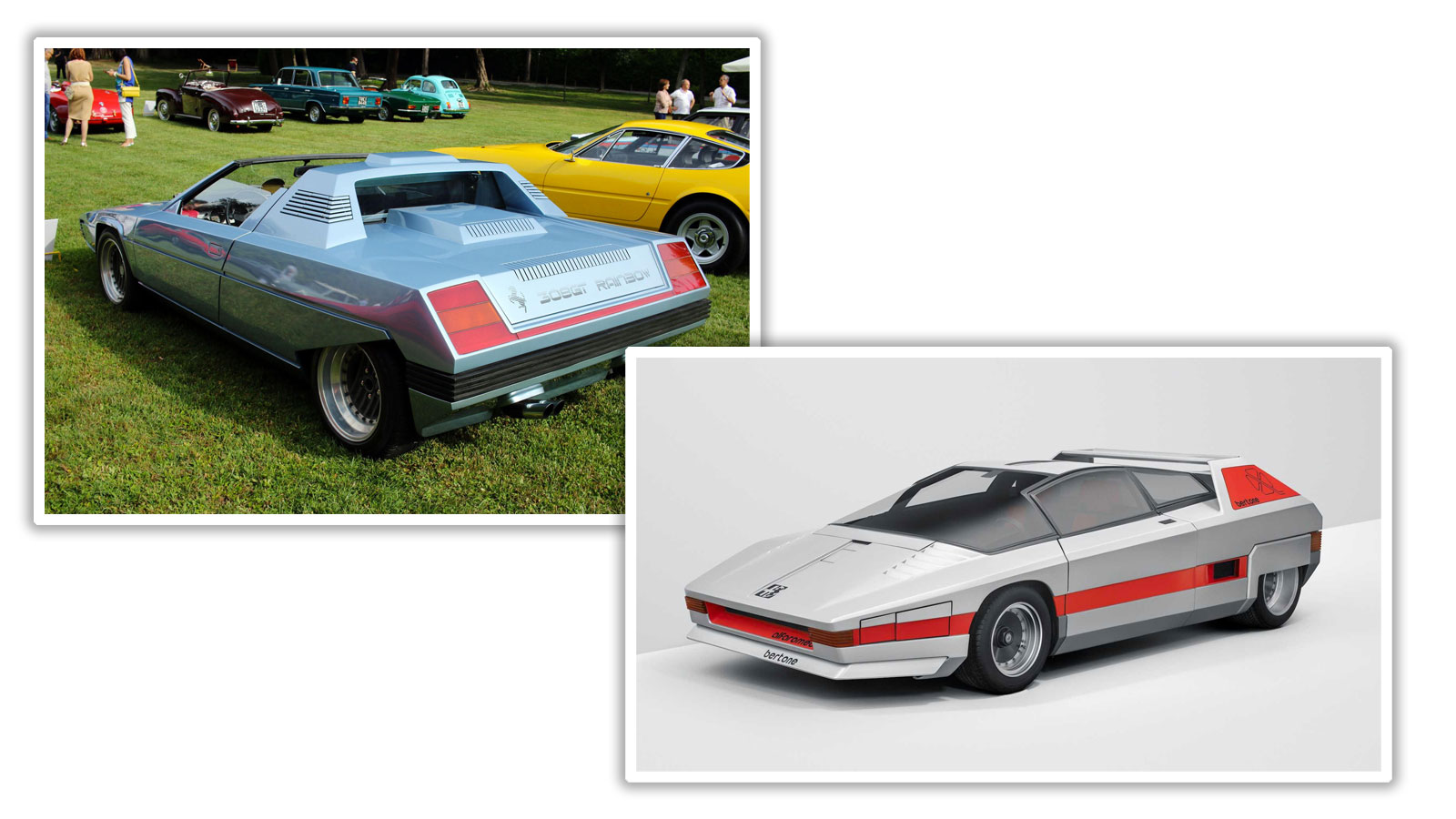 The Bishop also thinks that there could have been a place for a new NSU rotary sports car, since there was a sort of hole in VW/Audi/Porsche’s lineup around 1975, especially for something with an open roof:

“Could there have been a place for a last gasp rotary powered open topped little sports car in the VW Group (NSU owners at that point)?  I think so.  If you look at 1975 the VW Group was discontinuing the 914 and had already killed the Karmann Ghia convertible to focus on closed-coupe front engine stuff like the Scirocco and 924, so a car to go head-to-head with an X1/9, Scorpion/Monte Carlo or help to further bury the dying British industry could have worked.” 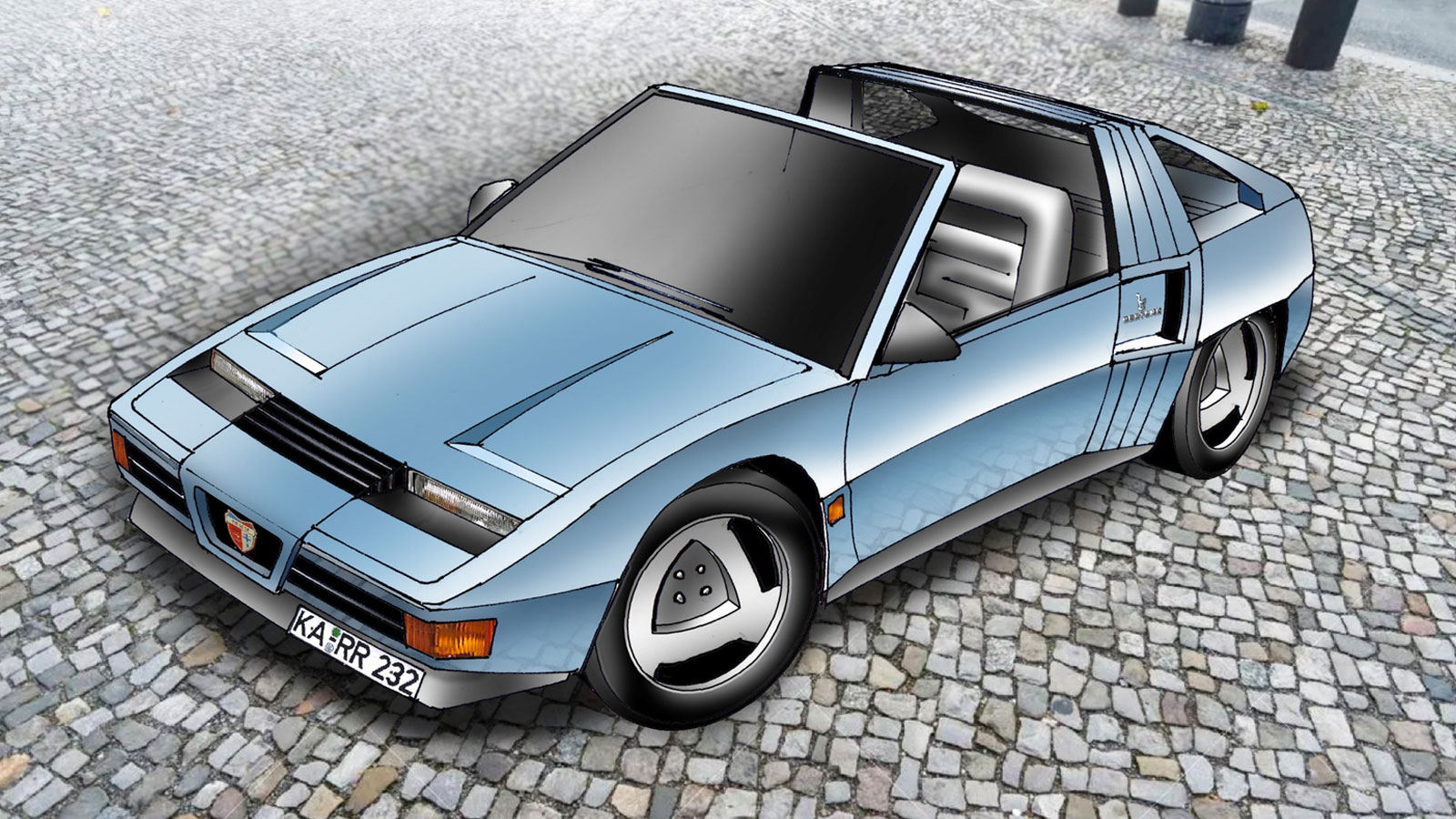 Here’s what the Bishop tells us about this very ’70s little stallion:

“We’d obviously see an ultra-angular shape for one the world’s only (if not THE only) mid engine rotary powered production cars.  The design would flare out to be a wider width in rear, but there is a reason.  The shape allows for wider rear tires and engine air/cooling scoops, but the main purpose is to allow the car to have a unique targa roof that is hinged at the back…you just unhook it at the windscreen, pop off the targa bar top trim, and it folds around back onto the ‘flying buttress’ supports (so the extra width hides the sides of the folded roof- and the targa bar trim snaps back on): 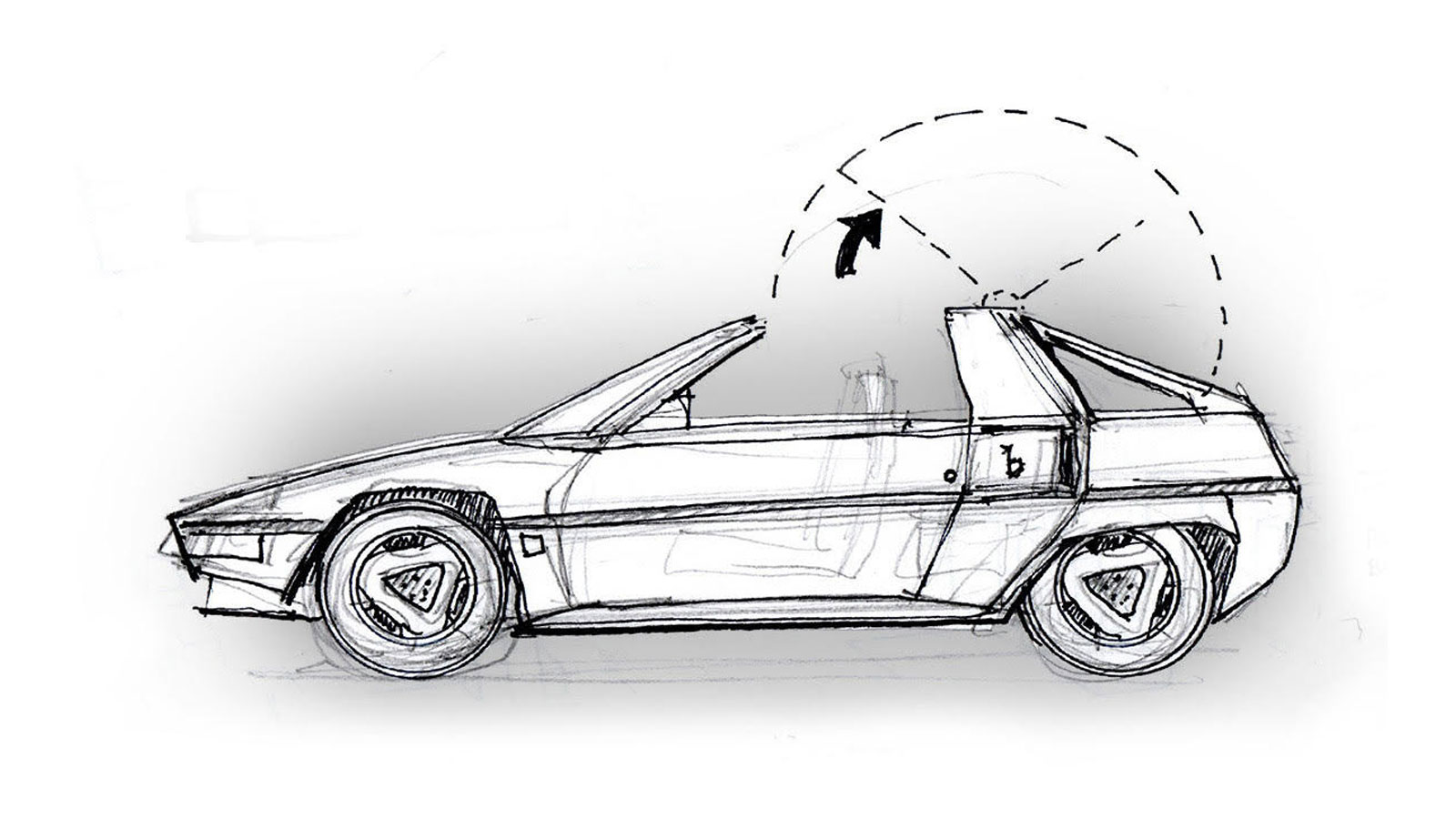 It could be glass to allow you to even see out the back while driving with the roof on the buttresses. No lifting a big thing alone, no clearing room in the cargo area for the top (it would be manually operated, but it might want dampers on the pivot points so that it won’t crush fingers if released.”

Personally, I love the idea of a flip-over roof, and I can’t believe I’ve never seen it on a production car, at least none I can think of. You’d need a bunch of rubber stops on there to prevent glass-to-glass bouncing contact, but that’s very do-able. This feels like an easier solution than having to stow roof panels or T-tops. 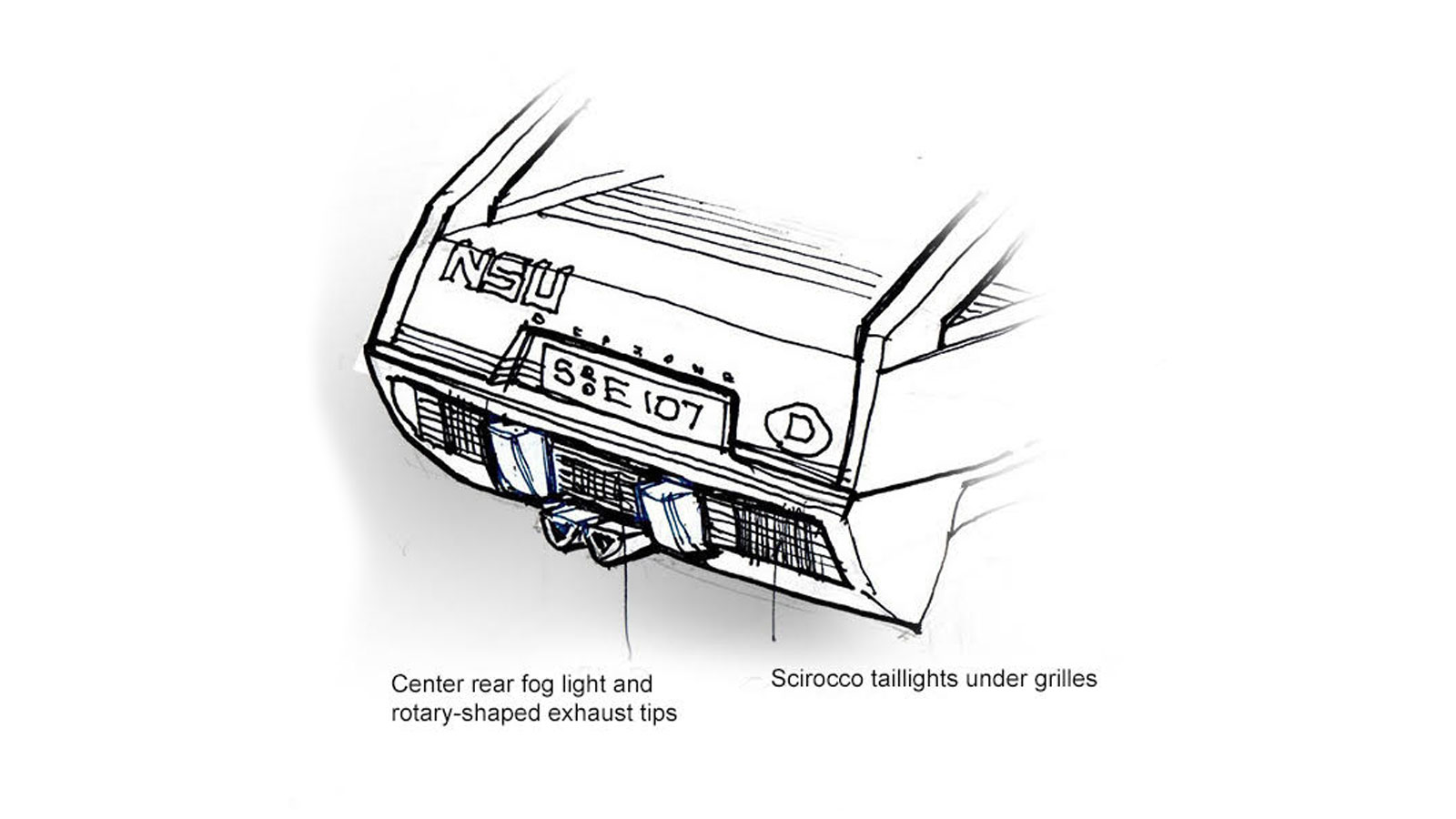 No overhang in the back…low taillights (likely parts bin items under bespoke grilles) and rotary-shaped exhaust tips.  You’d never get 5MPH bumpers on this or get it to pass emissions so forget the US market…which is just as well.

I am sort of disappointed that even in this no-limits fantasy, The Bishop can’t bring himself to imagine how this could meet US bumper or emissions standards. What the hell, Bishop? Imagine harder! Imagine President Billy Carter eliminating all standards, for everything! Come on! 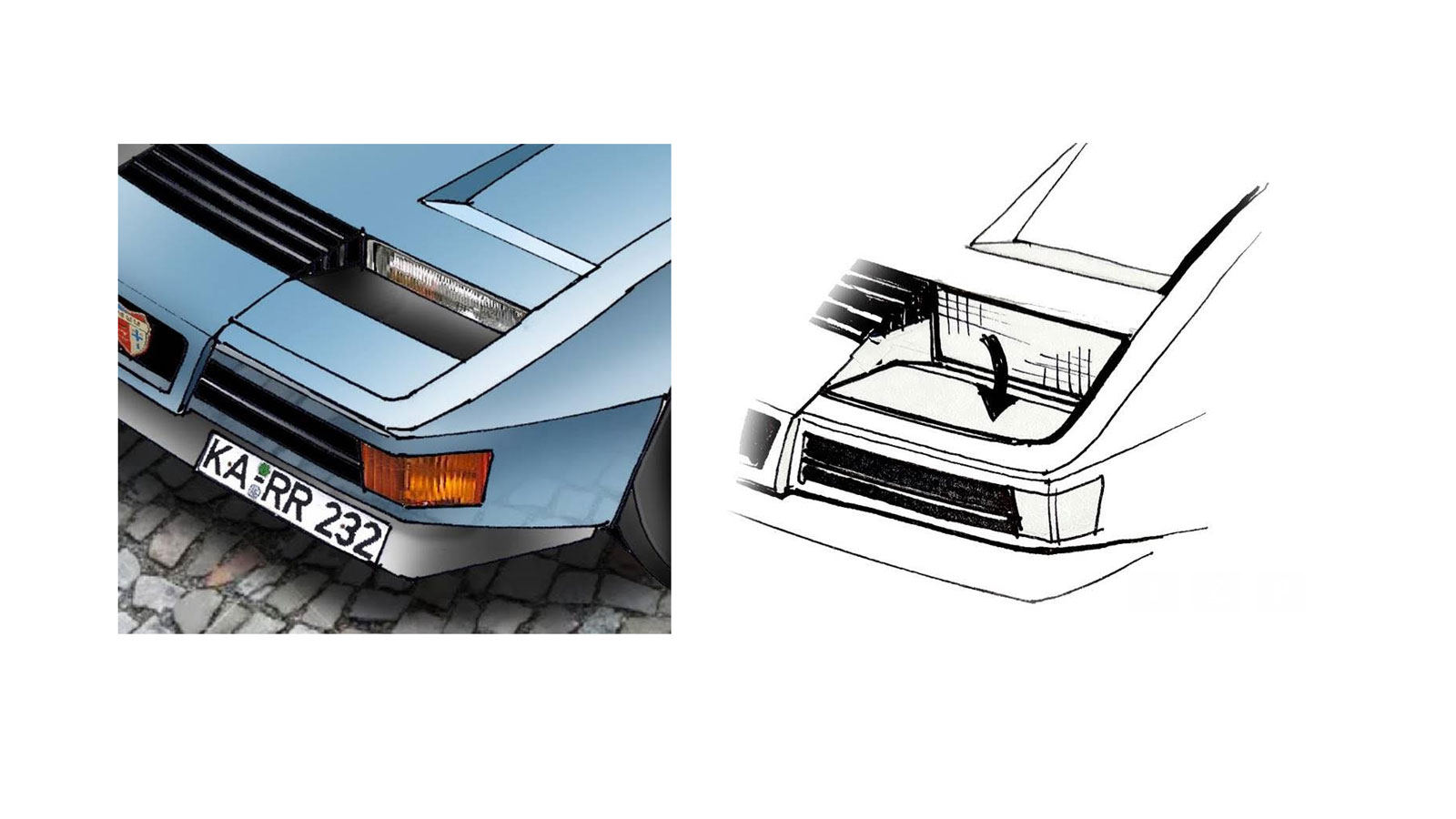 “As a Bertone car, you simply HAVE to do SOMETHING stupid to the headlights.  In this case, at the front you would see just a small squinty-eyed sliver of the lamps to simulate the exposed lights on the original Spider (the grilles on the ‘bumper’ echo the earlier car as well) and to allow for flash-to-pass functionality.  Here, lower ‘eyelids’ drop to expose the entire light for night driving.  Sort of a reverse of a Z31 300ZX headlamp, or opposite Alfa Montreal/Lamborghini Jarama.”

I think of this design fantasy, I’m most excited by what The Bishop dreamed up for the interior, though. I love a strong motherflapping theme design. 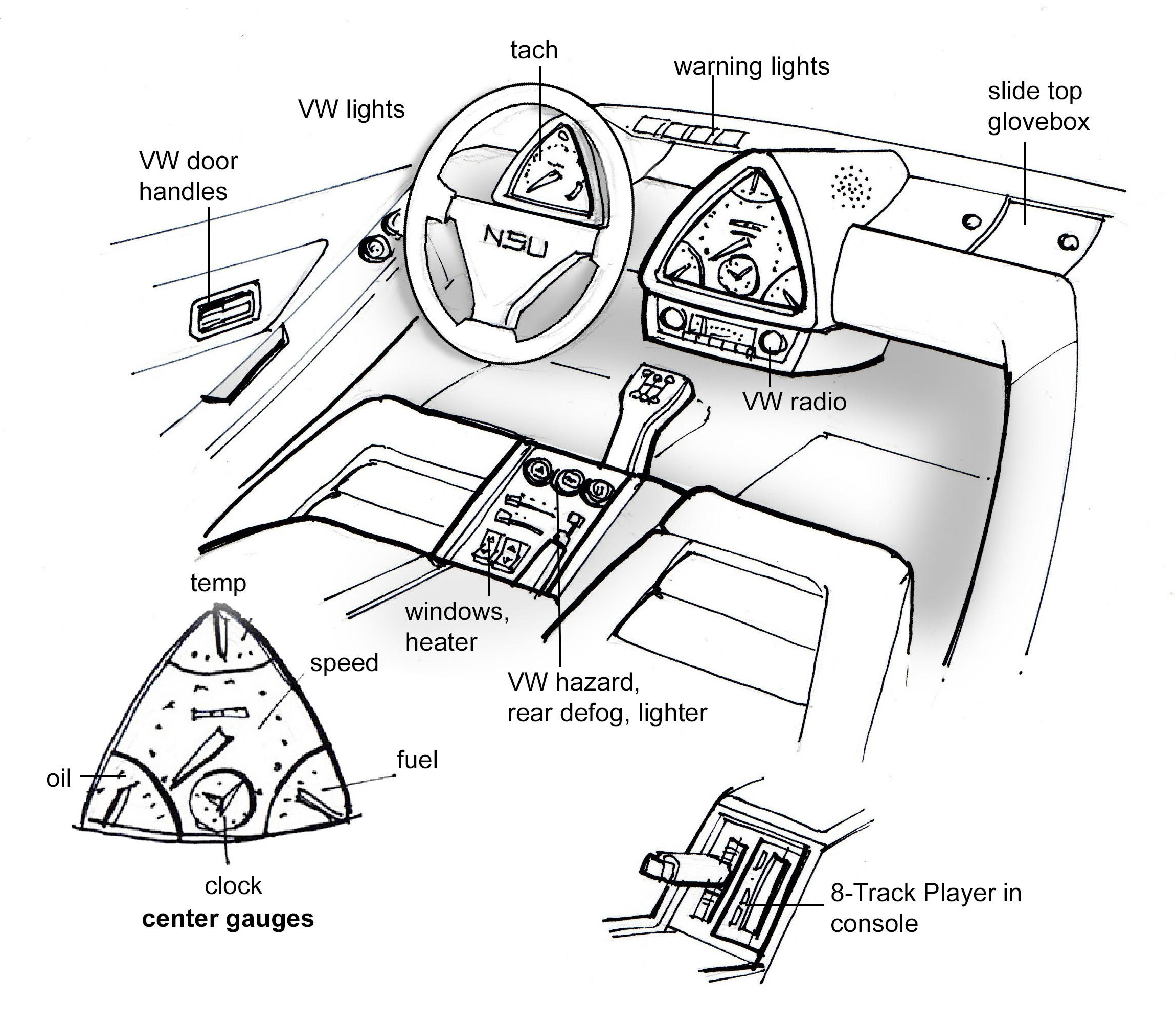 “Inside, you just KNOW it’s gonna be fucked up.  A normal design house would not try to overaccentuate the Vicks Cough Drop engine rotor shape, but Bertone would exploit the fuck out of it.

The asymmetric seats face a dashboard with a big rotary shape dead center for all gauges and another rotary shape for the tach above the rotary wheel.  A multi-angled center console for a variety of controls, including the standard VW Hostess Cupcake rear defogger switch and Sapphire XVII radio that doesn’t go off with the ignition switch that the kid would instantly recognize as being right out of the dash of their tourist-delivery US spec Type 4…I have no illusions of having to use parts bin items on the NSU.

I think it also needs an 8 Track player mounted backwards in the console to play Kraftwerk and Maha Vishnu Orchestra. 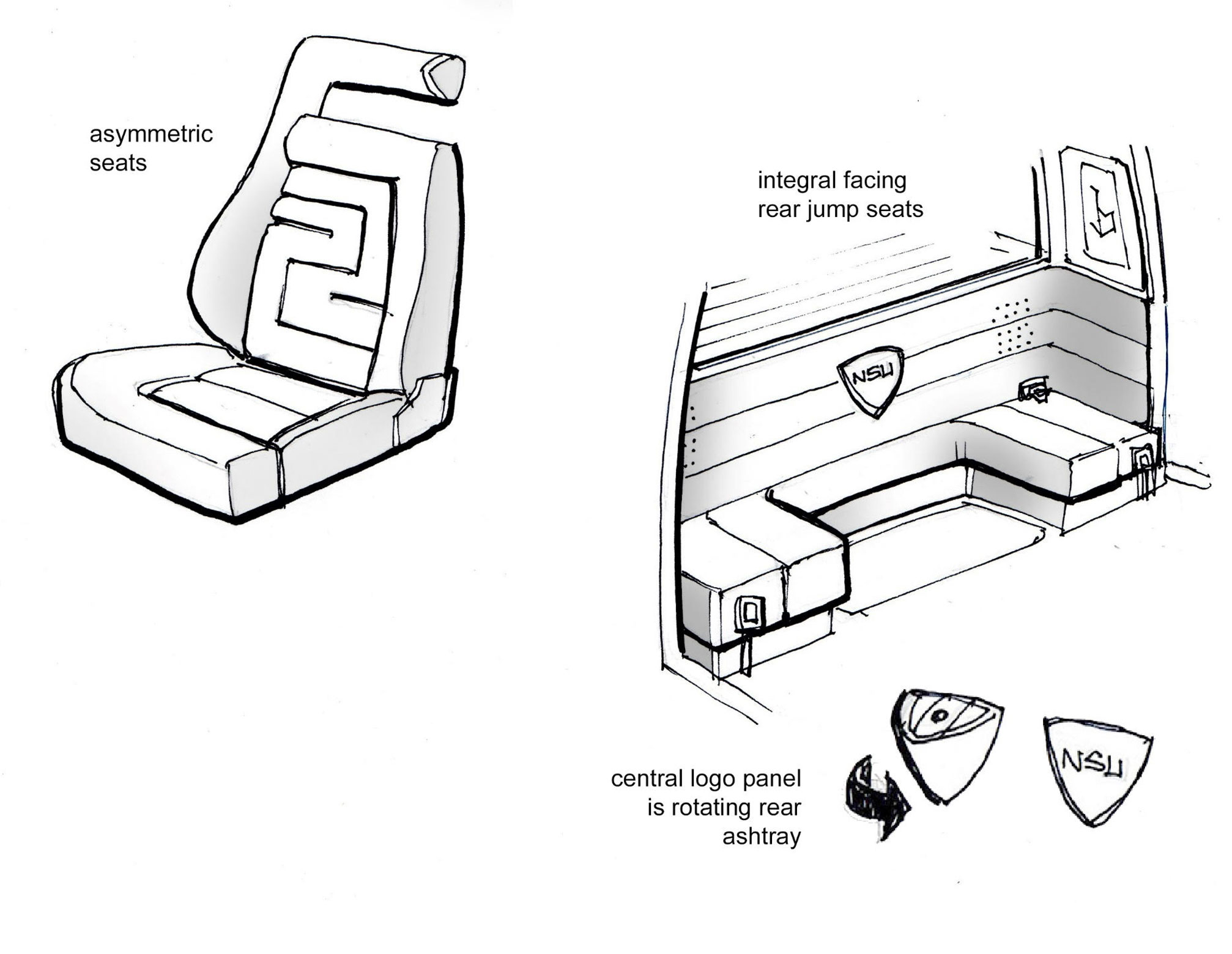 In back, the rotary engine is so small that you have space behind the seats; I have even put little sideways facing King Cab jump seats on the side panels (really only one semi-grown person sideways would likely come close to fitting).  Don’t worry…if that person or people back there need to smoke (it’s the 70s..they will) that rotary logo will rotate around to reveal an ashtray.”

I have to say, I think that asymmetric seat design is one of my all-time favorite fictional car seats, and I’m including the seats in the 1966 DAF 44 Dutch Masters Edition, the only car ever to feature a cigar-box themed interior design, a fictional car I just made up right now. So you know I’m serious.

So, what do all of you think, sexy readers? Would this sporty little angular runabout have been what NSU needed to keep going? Would you have been able to sit on those rear jump seats? Would you have loved that Wankel rotary-triangle theme?

I'm a co-founder of the Autopian, the site you're on RIGHT NOW! I'm here to talk to you about taillights until you cry and beg me to stop, which I absolutely will not. Sorry. Hug? Also, David's friend.
Read All My Posts »
PrevPreviousIt’s A Crime That Modern In-Car Hot Dog Sizzling Solutions Are Not More Common
NextAutomotive Would You Rather: Unholy Unions Or Gasoline Eggs?Next