Is there an Autopian alive that doesn’t miss American Motors at least a little bit? Their often innovative and always different cars were products that could probably only have been created by the The Last Independent American Automaker. I’ve always wondered how different choices or circumstances might have changed their fate or the fate of their cars.

AMC What If? is a semi-regular series to explore some of the alternate realities that might have resulted from AMC making a few changes back in the day. Here’s one that’s been bothering me for far too long.

There’s probably only one thing that I dislike more than those trite ‘Worst Cars Ever’ lists where the Yugo places at the top; it’s those ‘Ugliest Cars in History’ compilations. Not only are they usually written by people that know nothing about cars and are presented in advertising-filled slide shows, these hackneyed lists invariably have the AMC Pacer sitting at the number one spot.

While the Pacer is indeed a Haggis-like acquired taste, I’ve always found this rounded car more charming than ugly in the same vein as a Citroen 2CV or VW Beetle. Like those two cars, the Pacer came about its looks by virtue of function. The idea of wide small car with huge glass area was a perfect example of a car designed from the inside out. I could spend an hour listing off cars that fit the description of ‘ugly’ far better than the Pacer, including some of the overdone styled-with-a-machete shit sitting on showroom floors today. I’ve always been pretty fond of the looks of this silly car.

The overall shape of the Pacer really isn’t what is making it ‘ugly’ in people’s eyes; if that were the case then it wouldn’t have been cited by designer Tony Lapine as one of the inspirations for his design of the iconic Porsche 928.

I believe the issue is that the proportions and certain details fall far afield of the public’s perception of ‘normal’ and ‘correct’ in the design of a car. Some brave customizers have noticed this and made attempts to correct these issues. While their efforts are…uh…well intentioned, the end results typically don’t get the desired effect. To say the least.

It seems pretty obvious that with some relatively minor tweaks at the early stages of the design (but well beyond the capabilities of any customizer today) the Pacer could have been far better received by the public. Improved? I definitely wouldn’t say that, but certainly made to be less controversial. Surprisingly, I’ve never sat down and Photosloppyed out some rough idea of what this might have looked like, until now. 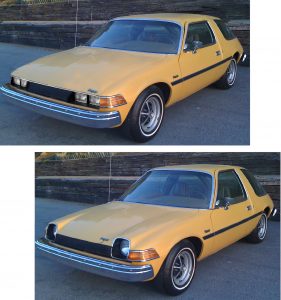 source: Wikipedia and The Bishop

Oddly enough, the Pacer is NOT a lot taller than cars of similar vintage; it’s only about an inch and a half taller than the AMC Hornet/Gremlin/Concord of the same era. However, to try to ‘normalize’ the looks I’ve chopped a good two inches or so off of the height (and lower the seats if needed).

So if it isn’t any taller than the average car, why does it look so odd to people? It’s really the glass area itself that is so exaggerated. At the top, the ‘aircraft’ style doors that wrap into the roof allow for the side glass to go so high, and the beltline on the side (lower line of the glass) is quite low. In fact, you might notice that door glass is too tall to roll all the way down! AMC even had to design in little ‘fins’ into the door panels so you could rest your arm there instead of on the sharp edge of the glass sticking up. To me, it’s cool as hell, but Average Buyer says ‘fishbowl’.

To make John Doe be less afraid to write a check, I’ve raised the beltline and brought to the door tops down to give it more ‘normal’ appearance.

At the front, the distinctive ‘bug eyes’ are a real love-it-or-hate-it part of the styling that work with the Cozy Coupe roof to add to the odd appearance that I love but apparently many do not. Here I’ve cut them down and replaced them with quad rectangular units that do not break the horizontal line of the hood and won’t offend anyone.

With the revised car, there are now new questions. To my eye and other fans-of-freaks like Jason, it ruins the car. [Editor’s Note: This is true. I like the Pacer as AMCgod made her. – JT] Still, if they had made these changes to the production car, would it still be an object of ridicule by the masses? Maybe it wouldn’t be, but would it still be ‘Pacer’ enough? I mean, is what I did to the car akin to that man or woman with an interestingly shaped nose that gets rhinoplasty and now looks ‘better’ in the conventional sense yet now lacks any kind of distinction in their appearance? They’re just a grey RAV4 in a Costco parking lot now?

Either way, we’re like fifty years too late to find out.  But what do you think?