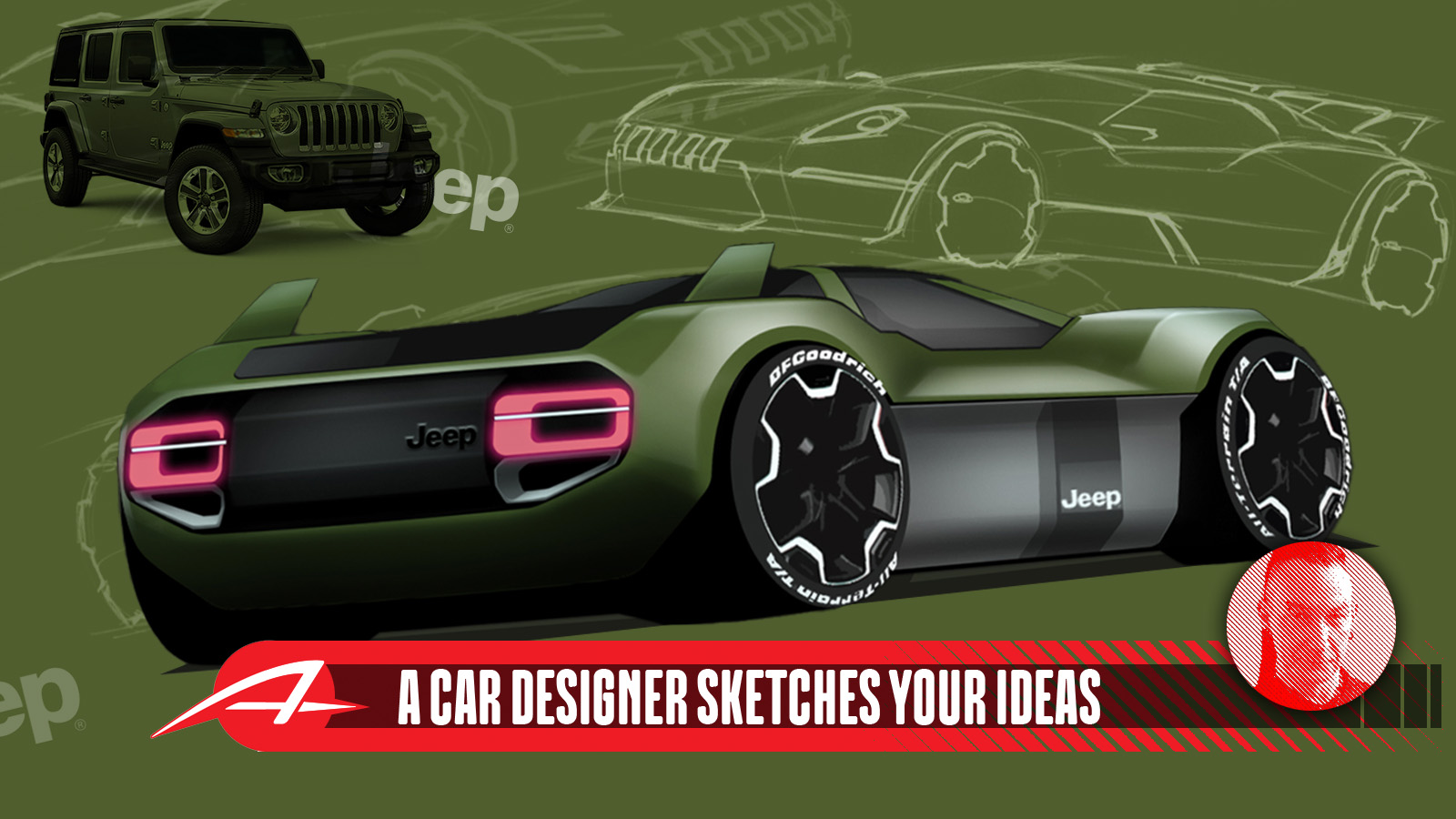 I awoke face down eating dirt, the post apocalyptic sun punching me from behind. Staggering to my feet, I turned around to see the city burning, smoke towering into the dusty sky.

Where the hell was I?

In the corner of my eye a rooster tail of dirt was moving quickly away from the horizon and toward me. Momentarily transfixed by the speed the vehicle making it travelled across the parched ground, a horrible shrieking and hollering noise began to emerge behind me. Trying to run I found myself fixed to the spot. Panicked, I looked over my shoulder to see something indeterminate, yet terrifying was chasing me. I still couldn’t move. My brain was sending signals to my legs but nothing was happening. 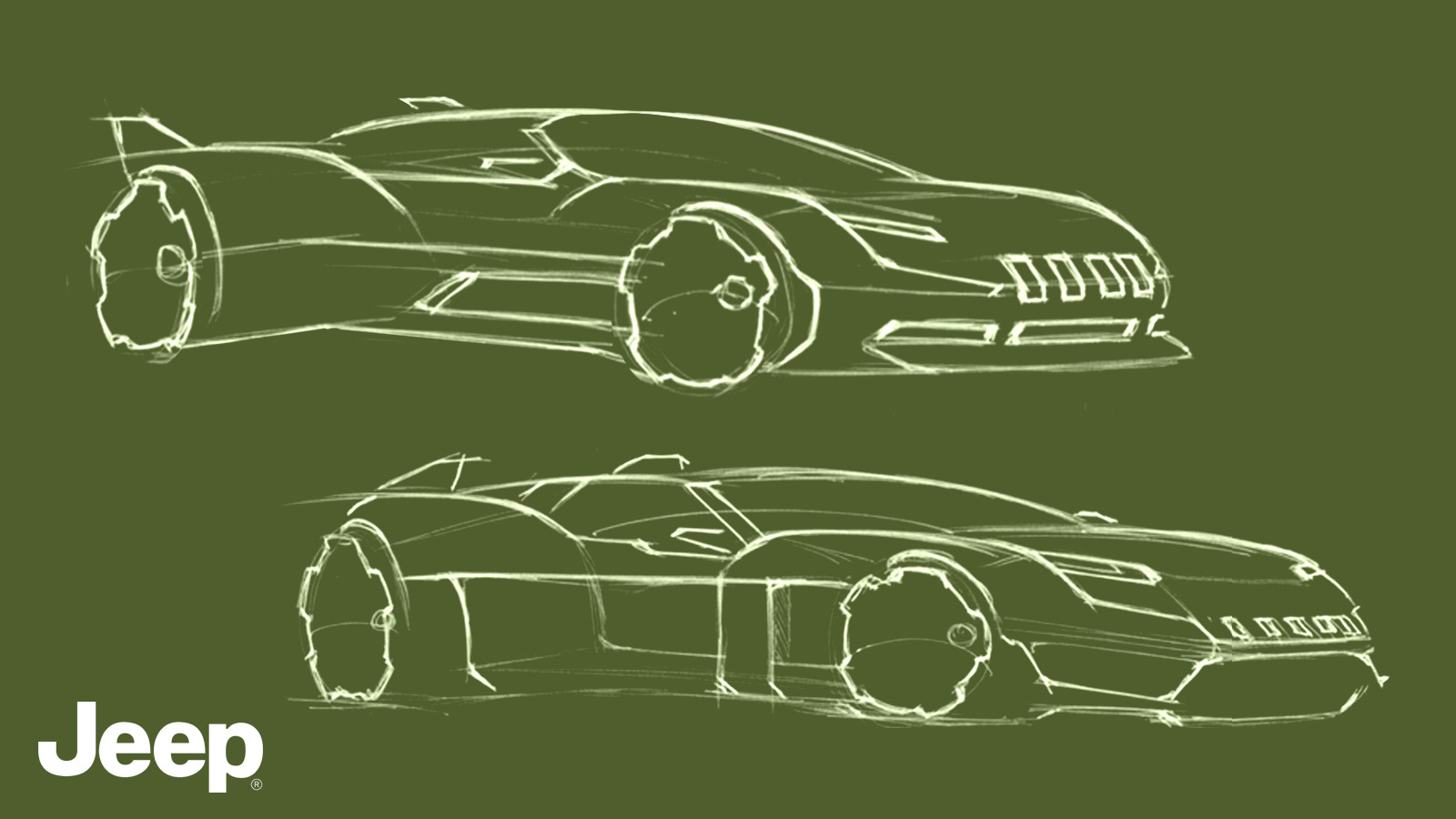 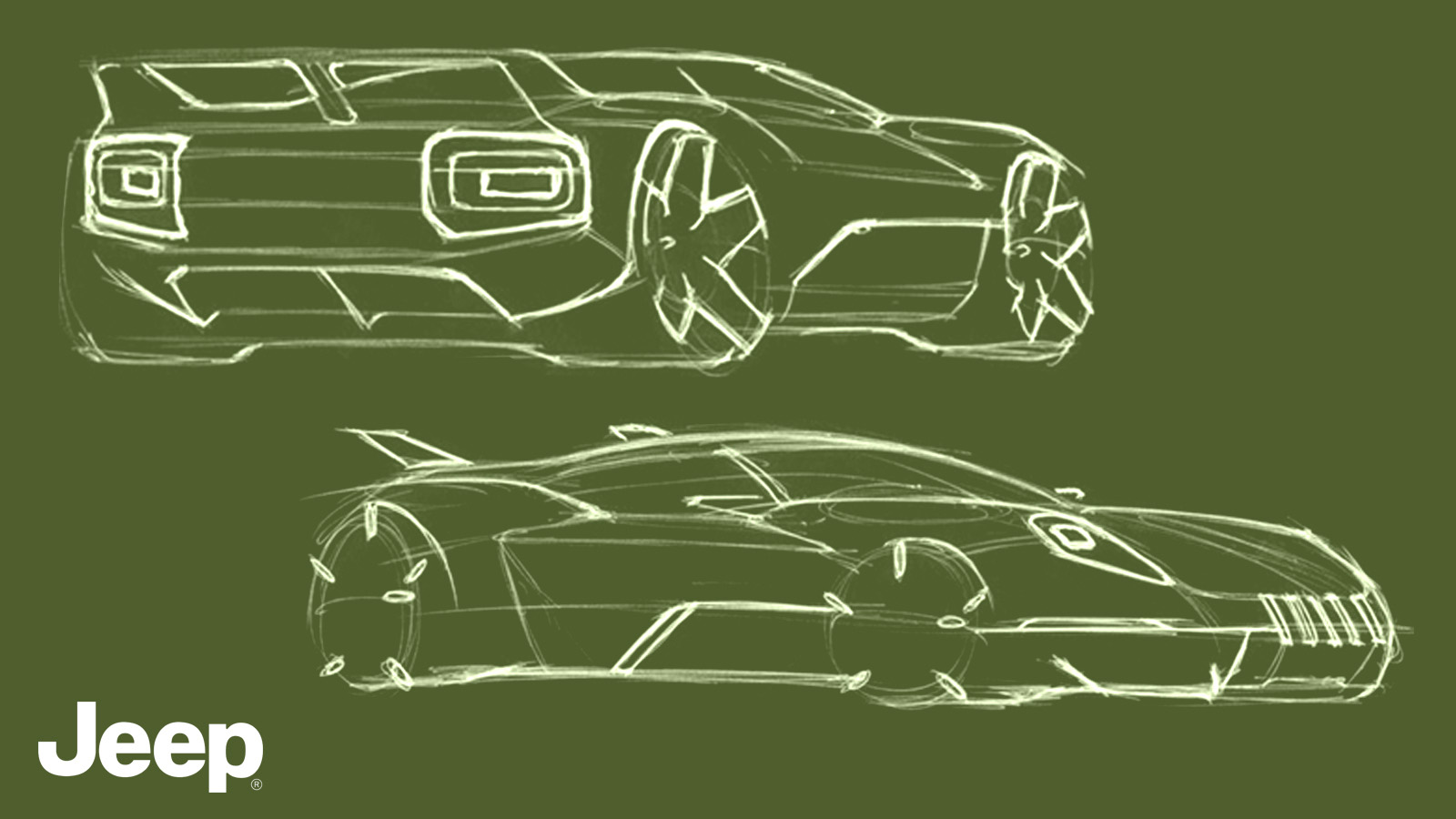 A car emerged from the front of the moving cloud of dirt a few feet in front of me. It kinda looked like a patchwork of various Jeeps, but much lower and longer, closer to the ground and decidedly home built. Covered in scars from battles fought and survived. A gull wing door opened with an exhausted hiss, blowing dust everywhere.

“Get in if you want to live,” a somewhat familiar voice said from inside.

Finding myself able to shuffle forwards, I peered inside to see a figure covered in home-made body armor with a steel WWI style Tommy helmet and a slightly crazed look. A shard of taillight lens hung round his neck on a piece of wire.

“D-David? Is that you?” I stammered. It looked like him, only much older and wizened, and with the crazed thousand yard look of a lifetime spent on fruitless wrenching.

I did so and yanked the door shut.

“Where the hell am I? What kind of Jeep is this?” I noticed a medallion with a picture of Torch bathed in light was hanging from the rear view mirror.

“Built it myself. After the collapse speed became the way to survive out here. I had enough parts lying around.” He gunned the motor, cackled maniacally and we sped off away from our pursuers.

“Picks up great, doesn’t it? I pulled the Hurricane out of ’28 Barracuda. Actually this is the second motor. Does much better on head gaskets. They were costing me a fortune in bottle caps.”

Oh god. I glanced around at an interior cobbled together from various XJ and SJ parts seemingly held together with little more than hope. He’s really cracked. A Jeep Supercar. What madness was this?

“Hold on, big bump coming up!” he yelled over the sound of a redlining straight six and a car trying to rattle itself to bits. I smashed my confused head against the roof and blacked out again.

[Editor’s Note: The least believable part of all this is David driving fast. – JT] 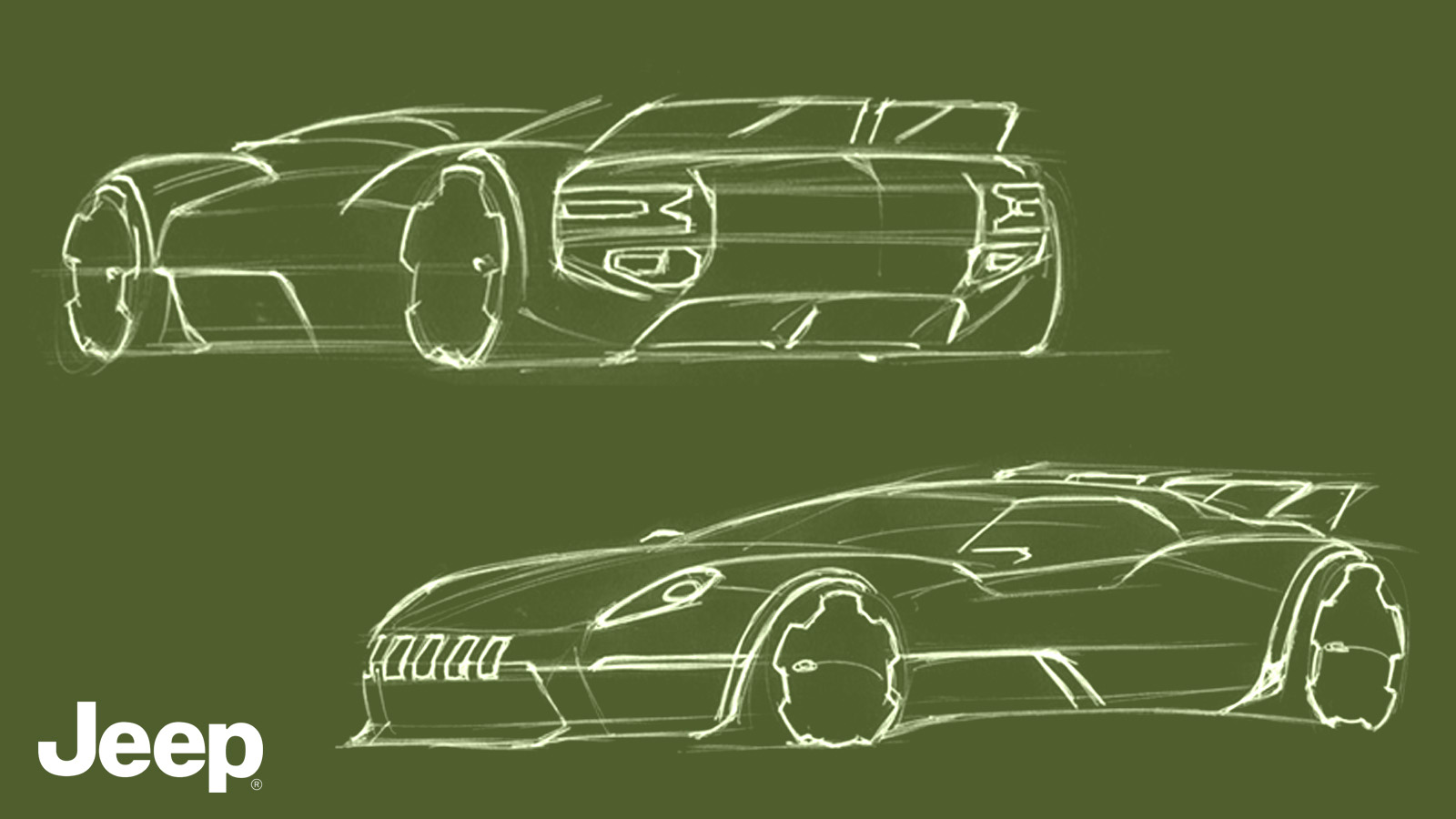 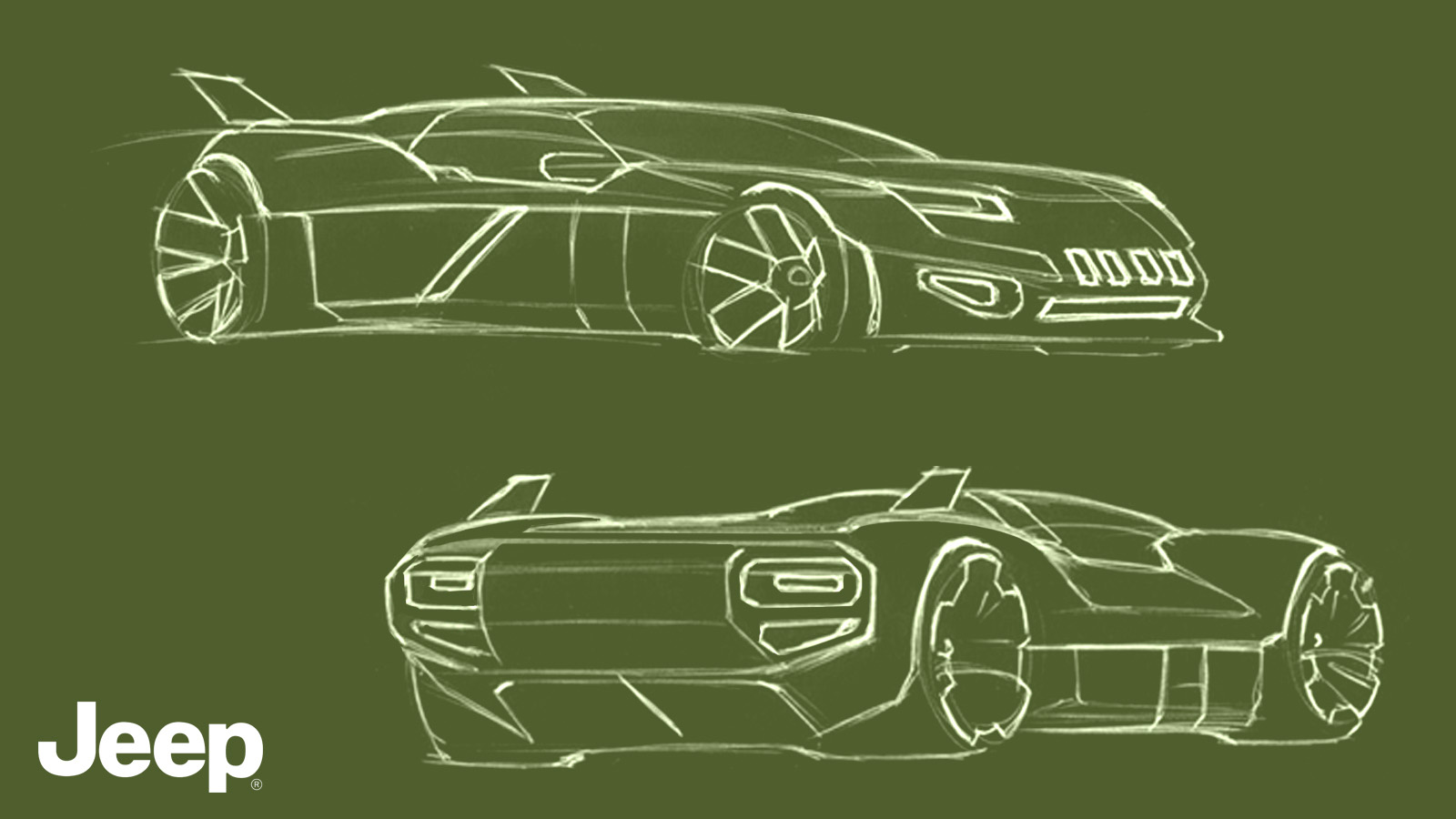 I came round with three hangovers to find myself face planted on my drawing table surrounded by uncapped markers, drooling onto a sheet of blank paper. A Jeep supercar? Man, I have really got to stop getting high from sniffing marker fumes.

Now, if one of my students came to me with the above half-assed Mad Max style fan fiction, you might think I wouldn’t let them pick up a ball point again until they’d completed a course in creative writing. But the dystopian future is a valid scenario for your design idea if your research backs it up. And it’s always fun to imagine vehicles that are completely outside what a manufacturer would normally make. One of the last projects I worked on for over eighteen months was something that our company had never done before – a complete change from what we were known for. Right up until the moment it was axed. I had even designed the camouflage for the prototypes. That’s how far along it was.

[Editor’s Note: Remind me to get Adrian to write about the process of camo design! – JT]

As an example, someone I graduated with designed a Land Rover supercar for his graduation project, and walked straight into a job at Jaguar. Of course what we didn’t know at the time was Jaguar were looking to get into the lucrative SUV market with the F Pace.

The idea for a Jeep supercar didn’t come from a marker fume induced blackout. Rather it was suggested by commenter AMPhoto, who presumably has a weird Jeep fascination like David. Maybe they can go to meetings or something. Reading the original suggestion while writing this I realized I missed the bit about removable doors and round headlights. Sorry about that, I’m an air-headed artsy-fartsy creative, don’t you know.

The trick with this sort of thing is to not slavishly copy visual features and try to force them onto a different vehicle type. Rather, it’s about capturing the feeling of the brand within its existing visual identity. With Jeep (and obviously I mean Wrangler because it’s their halo vehicle and the aesthetic anchor of the whole brand) apart from the classic seven bar grille, there’s the shape of the front fenders, the general lack of curves and a feeling of ruggedness combined with looking unstoppable. What does this mean for our Jeep supercar? 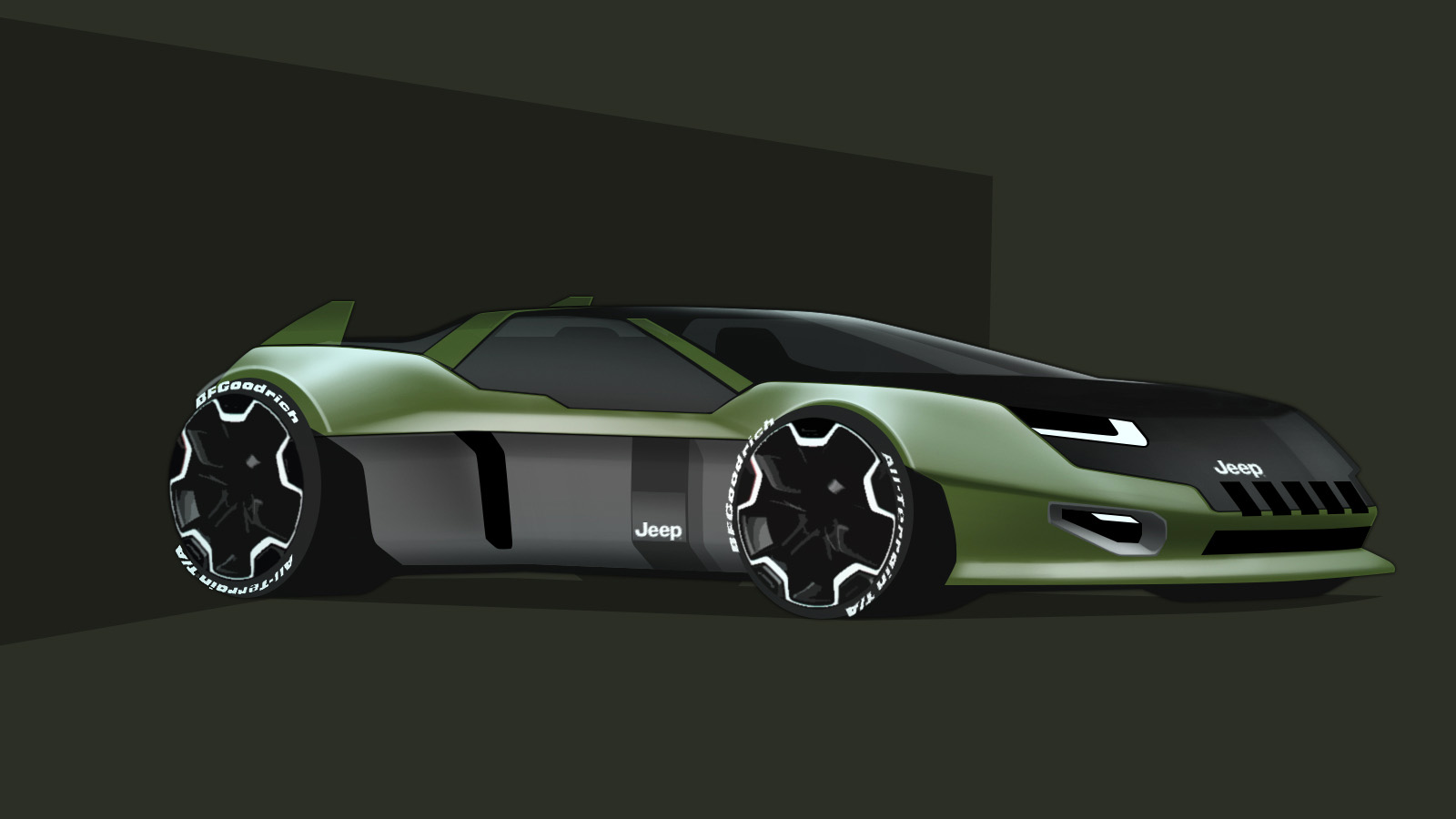 Although it doesn’t need a raised ride height, It should still exudes a certain bluffness as opposed so taut organic curves, like you’d see on a McLaren. I’ve replicated the front fog light surround of the JL, using it as an air curtain to manage airflow and brake cooling for the front wheels, as well as including a slight cut out in the wheel arch to give a subtle hint to the unique shape of a Wrangler’s front fenders.

The grill is a classic Jeep identifier, but I’ve made it much shallower so it fits onto a lower nose. The front still has quite an aggressive blocky shape, just leant back and with less vertical height as befits a mid-engined car.

The DLO [Editor’s Note: That’s Day Light Opening, silly designer-talk for “window” – JT] has a chamfered cut out, as you can drive a Wrangler with the doors off, so this lower line helps give a feeling of that. The B-pillar is simple and wraps onto the roof, like a roll bar. I’m imagining the roof as a lift out targa panel, for fresh air goodness at 160mph. 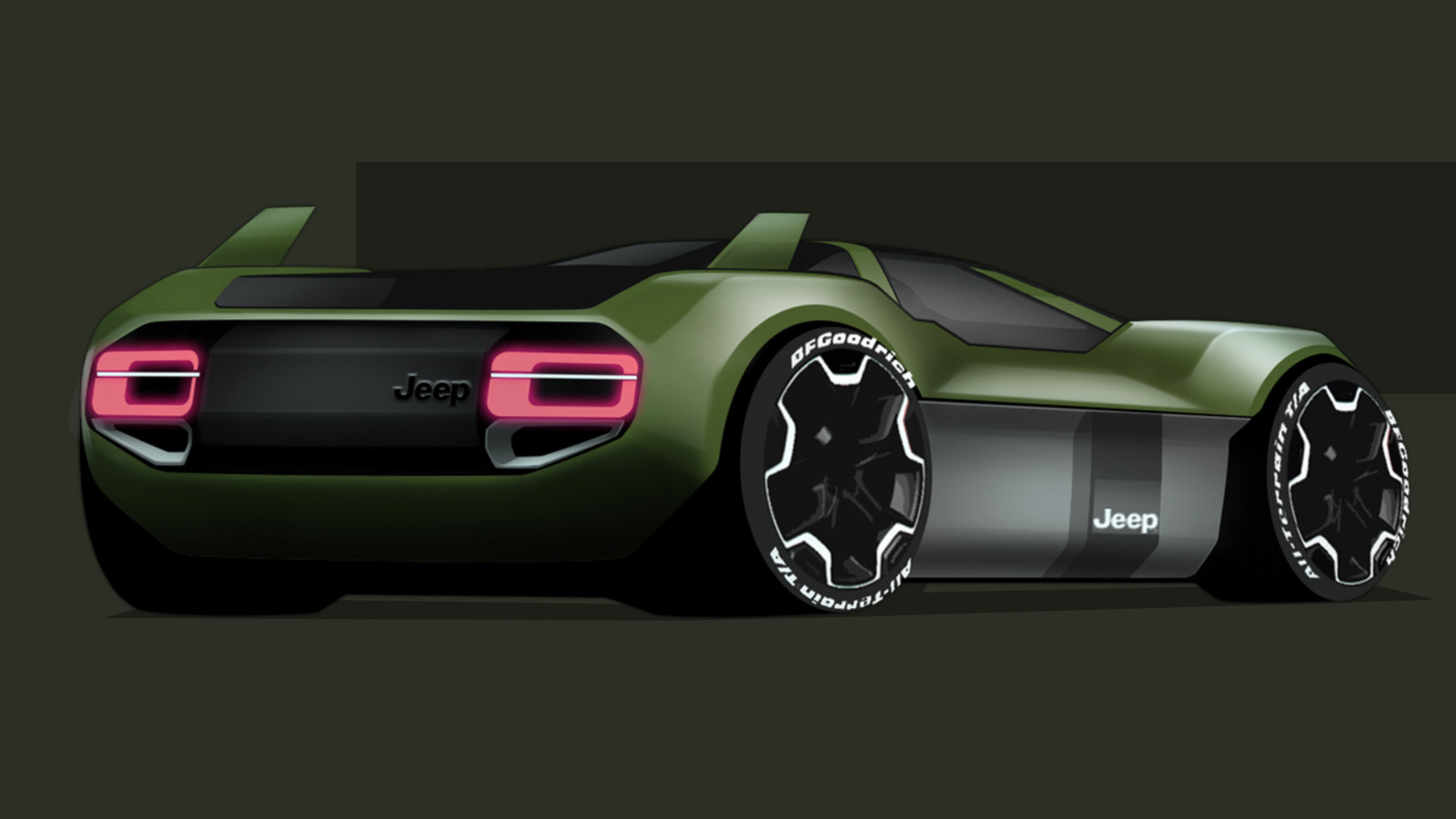 Moving towards the rear, it’s hunched and muscular but I’ve tried to keep the shapes and outline simple, without any unnecessary sculpting or flourishes. Jeeps are straightforward no-nonsense cars, and that’s what I’ve tried to stick to here. Only the little fins are a slight indulgence, but they serve to raise the rear a bit visually, helping to give the car more of a wedgy supercar profile.

The rear lights are an update of the classic more rounded style found on pre-JK Wranglers. This was at the behest of Torch ominously giving me the evil eye while nonchalantly fondling the expensive and toxic markers on my desk. I was going to update the current JL hourglass shape taillight, but in a design studio, you find a way to work with the direction you’re given.

Do you want to take this out into the lawless badlands of the post-President Musk collapse, hanging onto the last shred of your sanity by attempting to uphold what’s left of law and order? Or are you going to break it apart for precious parts and metals and leave me to be ripped apart by the crypto-zombies?

Professional Car Designer and writer about car design. I have a BA in Automotive Design and a Masters in Vehicle Design from the Royal College of Art in London, where J Mays was my tutor. He used to bring in donuts. I was hired from there into a major European OEM. I daily drive a 2011 L320 Range Rover Sport and also own a 1983 Ferrari Mondial QV. I always wear black, love goth music and have way too many books. twitter: @adrianfclarke. Instagram: adrianfclarke
Read All My Posts »
PrevPreviousThe Dirt-Cheap Mitsubishi Mirage Is Getting A Ralliart Edition And It Might Look Like This
NextWacky Latvian Car Company Dartz’ Founder Tells Us How To Build A Car For DictatorsNext