Prove Me Wrong: I Just Don’t Think The Fiat 500L Was That Bad

I realize that this is one of those situations where I’m likely going to find myself very alone. I’m okay with that. Sometimes in life you just need to draw a line in the sand, take a stand, put yourself out there to defend something unpopular, and, even more significantly, unimportant. Sometimes you have to pick a hill that’s so far from the battlefield, so useless and insignificant and generally blissfully forgotten by nearly everyone else, and you have to pick that hill to die on. Or at least get maybe a little nauseous on. This is my hill, and there’s a Fiat 500L parked on it. 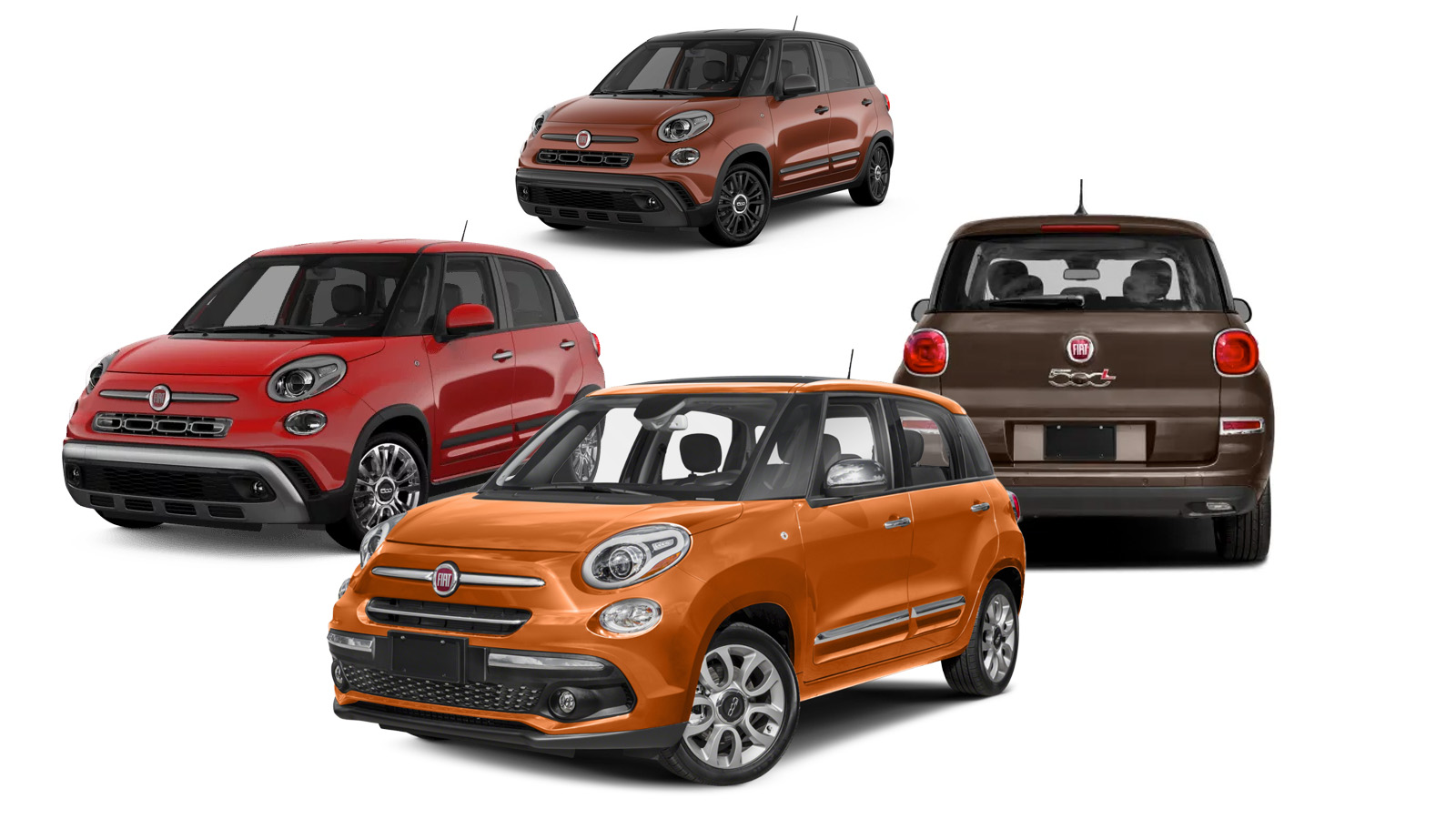 From what I can tell, almost nobody seems to like the 500L, at least not openly, and that never sat right with me. I know it’s not a great car, sure, I’m not completely delusional. But it’s also not a bad car, especially when you consider its whole reasons for existing, and I think it even manages to have a good bit of unexpected character, too, and some surprises. It’s just not as miserable as everyone seems to think, and I’m not even sure what the hell people are thinking it was supposed to be, anyway, and maybe everyone should just shut their big yaps already and drive off in their fucking CR-Vs or Outlanders or whatever other forgettable bullshit they thought was so much better, even when they could have picked up an unwanted 500L for a bag of pimples and and and okay, take it easy, Jayjay. Breathe.

Did you know these were built at the Serbian factory that used to make Yugos? Does that improve your opinion of them? I like that. You can be snob if you want, though. I won’t judge, audibly.

Not many people bought 500Ls, especially in America. According to these numbers, all of, lets see, eight have been sold in America this year. I mean, they went out of production in 2020, so it’s amazing they sold any really. The biggest year was 2014, with 12,413 sold, but by 2020 they only moved 475 of these things. Oof.

And, this is the first production car with a factory espresso-maker option! That didn’t sway some people? It seems to have worked like this:

So, what’s the problem with these cars? You know what I think the problem really is? The 500L was a car that had some very specific, perhaps idiosyncratic, but practical goals, and didn’t bother playing the expected game of the time, which was to be a pretend-rugged or aggressive SUV or crossover.

The whole point of the 500L was telegraphed into the use of the most right-anglest of letters, L, which stood for Large, Light, or Loft, and I think generally those Ls make sense. It was all about interior room and packaging. It had a tall greenhouse with lots of glass in an era when beltlines were getting higher and cars were feeling more and more claustrophobic.

Fiat designer Andreas Wuppinger explained it all quite well in Fiat’s book about the 500L’s design, called Fiat 500L: A Design Approach:

The 500L is characterized by a continuous glazing, large apertures towards the outside and a highly liveable internal space. The design of bodywork inspires a sensation of safety obtained through a high belt line, the accentuated shape of the wheel arches and a raised driving position. As a point of reference we did not, however, consider the SUV, which often has a negative connotation: grandeur, high consumption and almost shielding one from the outside. Here the process is the opposite; I feel protected inside the car but have a great view of the exterior; the clutter of the bodywork is reduced but the space available inside is maximized.

They deliberately weren’t just trying to make another me-too SUV, they had a plan. A plan based on the humble yet important root question of what the 500L would be for: moving people and their shit from place to place, usually over paved roads. That’s it! It’s designing a car from first principles! And what the hell is wrong with that?

This book also has some visuals I don’t quite get: 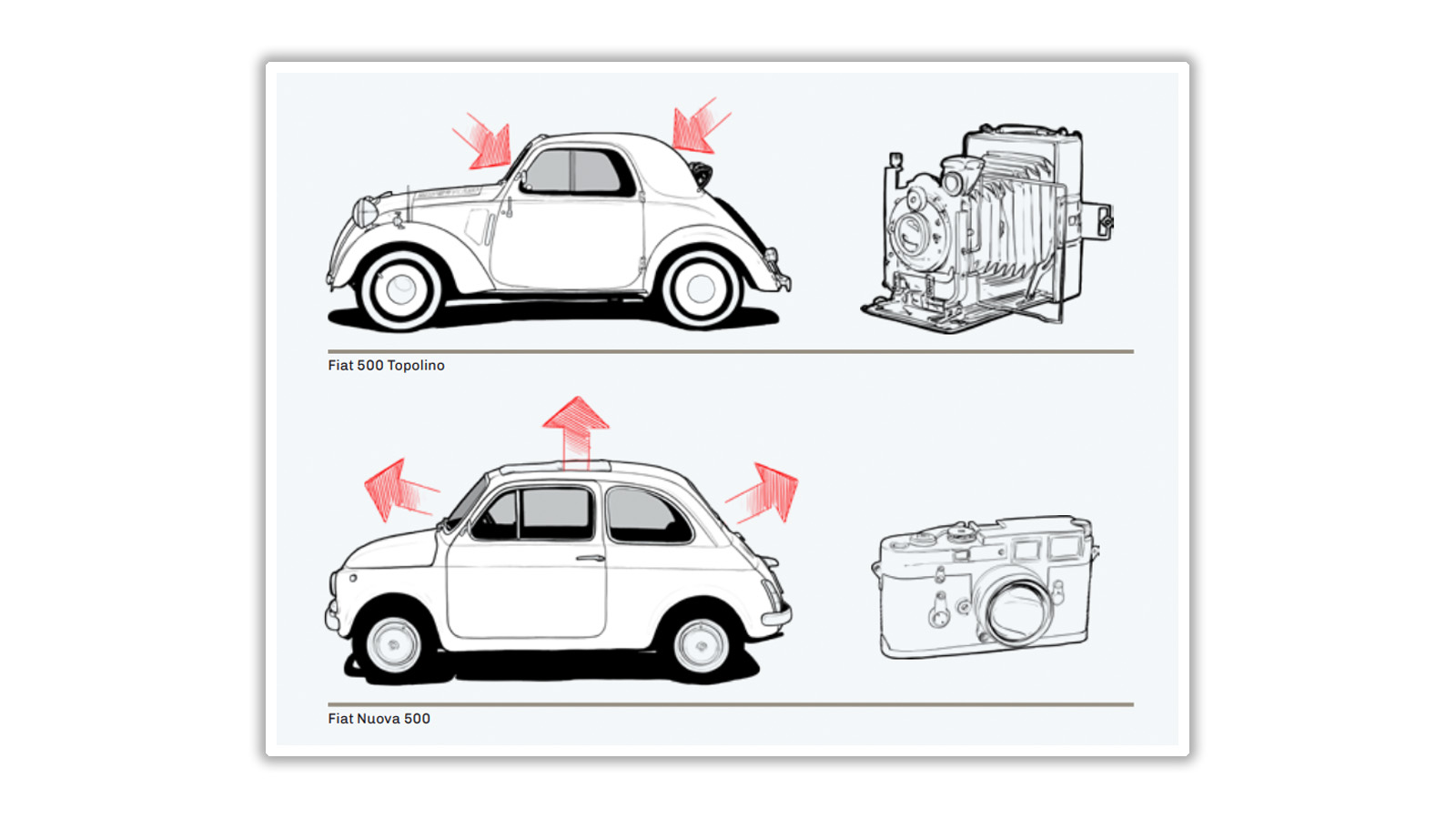 So.., the Topolino is like an old camera, and the original 500 is like a newer camera? Because of how it goes out instead of in? Okay.

Are the people who bought RAV4s so much better, choosing bigger wheels and less interior space and more limited visibility and a less-friendly look because, what, they’re gonna take the RAV4 out into the desert and fight for water against the People Of The Last Oil Derrick? No, they’re not. They’re going to drive to Trader Joe’s with one eye on their phone like the rest of us dipshits. At least the 500L had the dignity to be designed for the job it would actually do.

It was tall overall, with a high seating position and a cargo area with a divider to make multiple stories, and the interior was a sort of pleasant and open place to be. Here, look:

The designers said their inspiration for the interior was Le Corbusier’s Villa Savoye!

Europe even got an extended-wheelbase version with three rows that could seat seven. Seven people.

Also, Look at this novel double-A-pillar design! Almost every other car has a fat, beefy A-pillar right there, and it gets in your view and makes you long for the days of tiny, thin, elegant pillars, when life was cheap and a car wreck meant you’d spend the rest of your days as a voice emanating from a burlap sack. 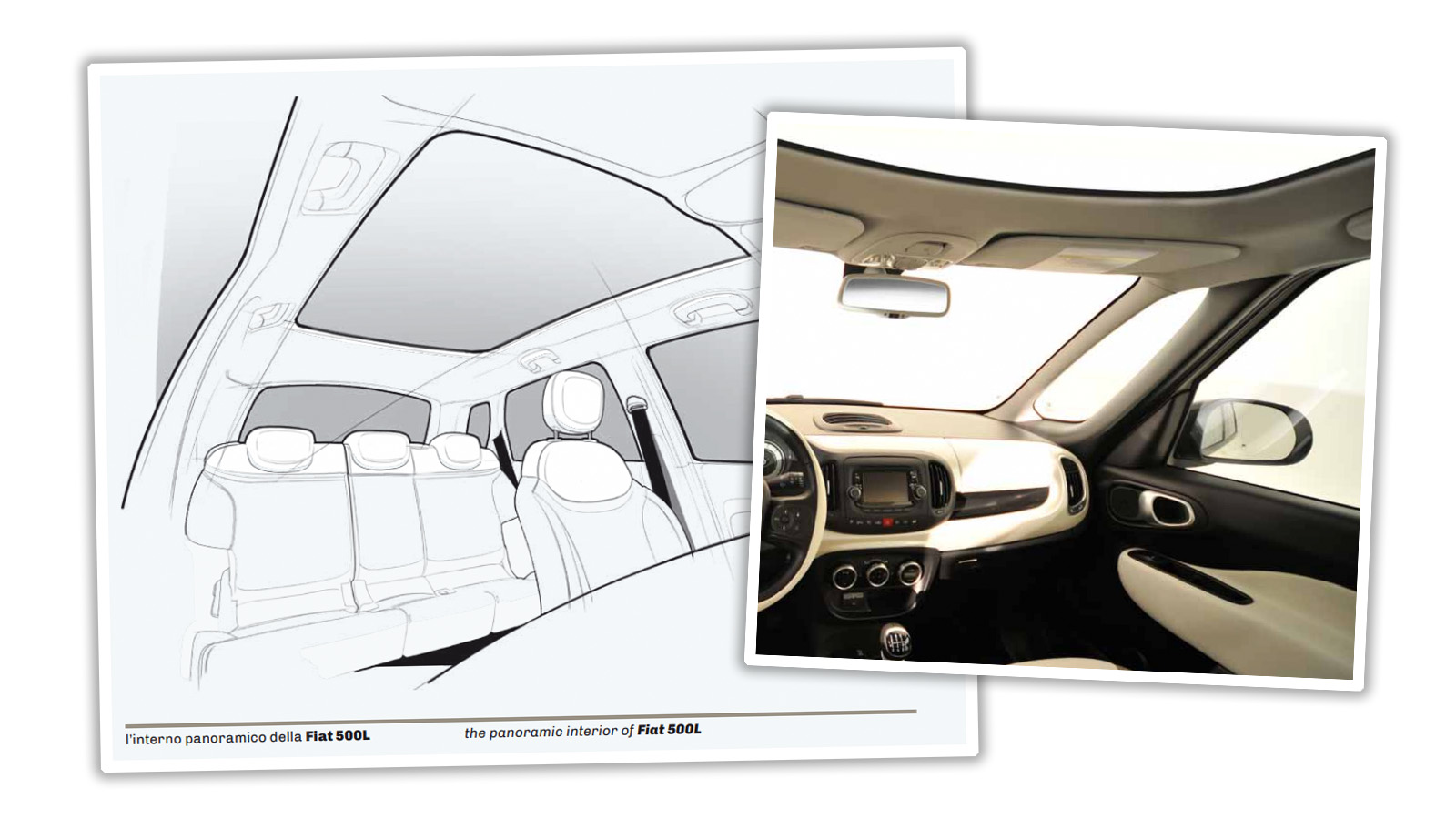 The 500L solves this problem with that split A-pillar, giving you great corner visibility! I liked it, when I drove one! Who else does that?

I think a lot of what I respect about he 500L is that it takes inspiration from one of the first bigger-on-the-inside wonders of packaging, the Fiat Multipla. Both the original and the re-born one: 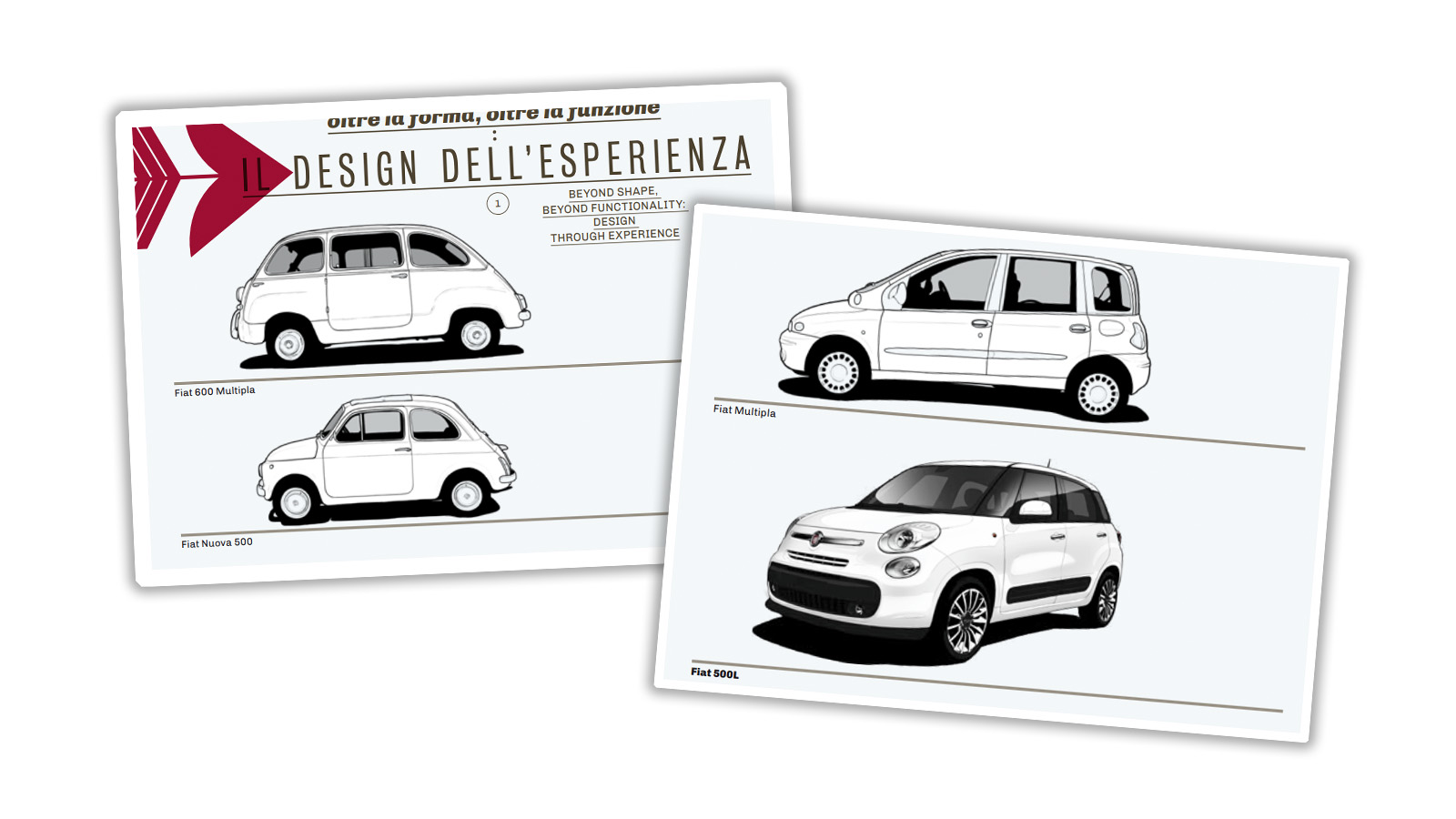 I think they’re brilliant inspirations, though I do really wish they stuck to their guns more when it came to the updated design. Look at those first sketches! 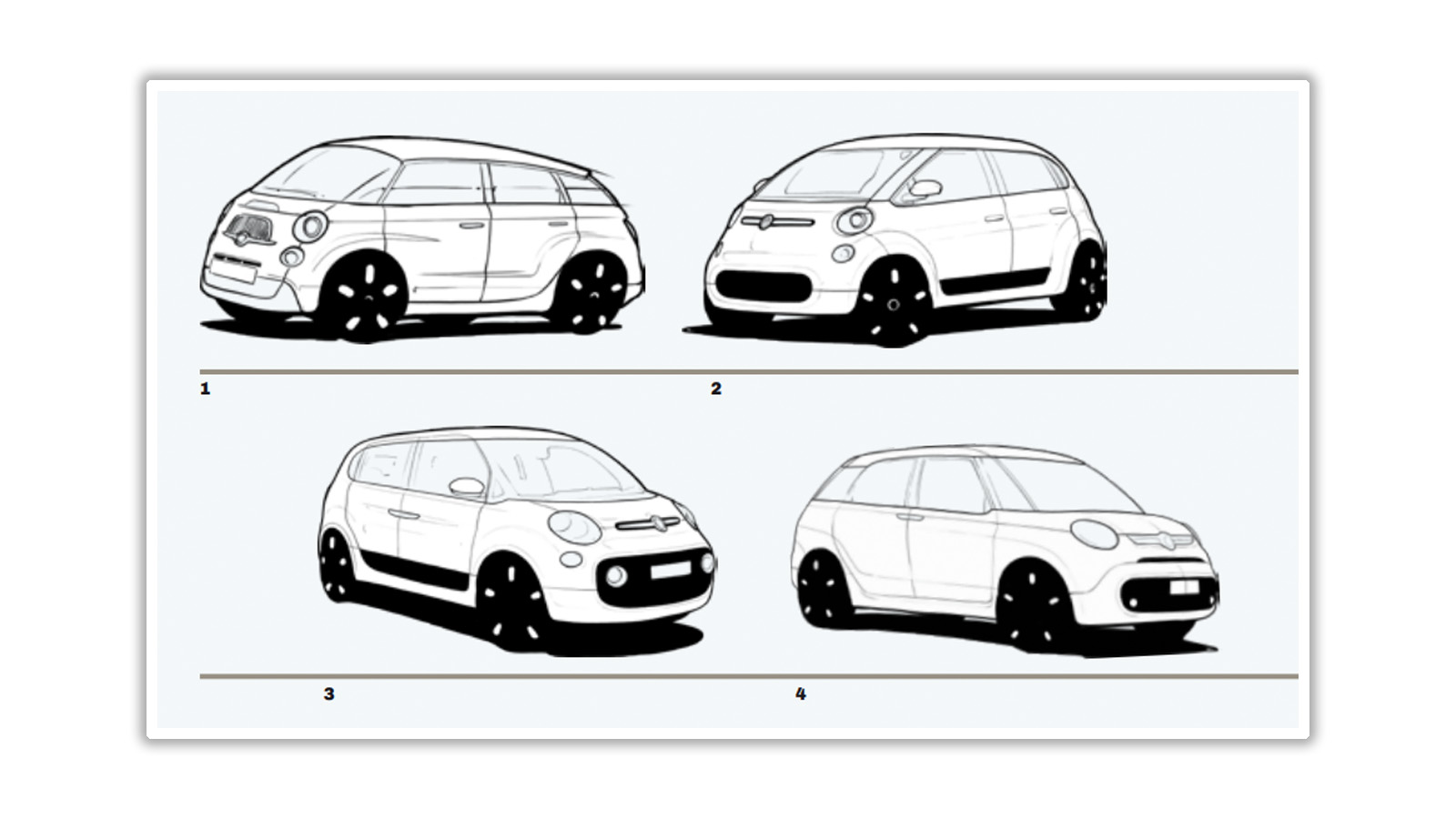 Would it have sold better if they were more daring and stuck to a true one-box design? Maybe not, but it’d have been cool as hell, I think.

Look, I’m just going to come out and say it: the failure of the 500L is not its fault, it’s yours. Well, I guess ours, because I didn’t buy one either. But I respect what it was trying to do, which was just its fucking job. It was honest and earnest, not some goofy poser in brand-new hiking boots and a camo vest like every other SUV or crossover on the market.

The 500L was an affable, smiling goofball that brought everything you forgot to bring on your camping trip. It wasn’t cool because it didn’t give a shit about being cool – and it still doesn’t. Maybe you felt a little silly being seen with it, but it did everything you asked of it, easily.

And, you could get it in a stick shift and in fun, bright, real colors. Yellow, red, even a real brown. Yes, a brown manual wagon was possible. 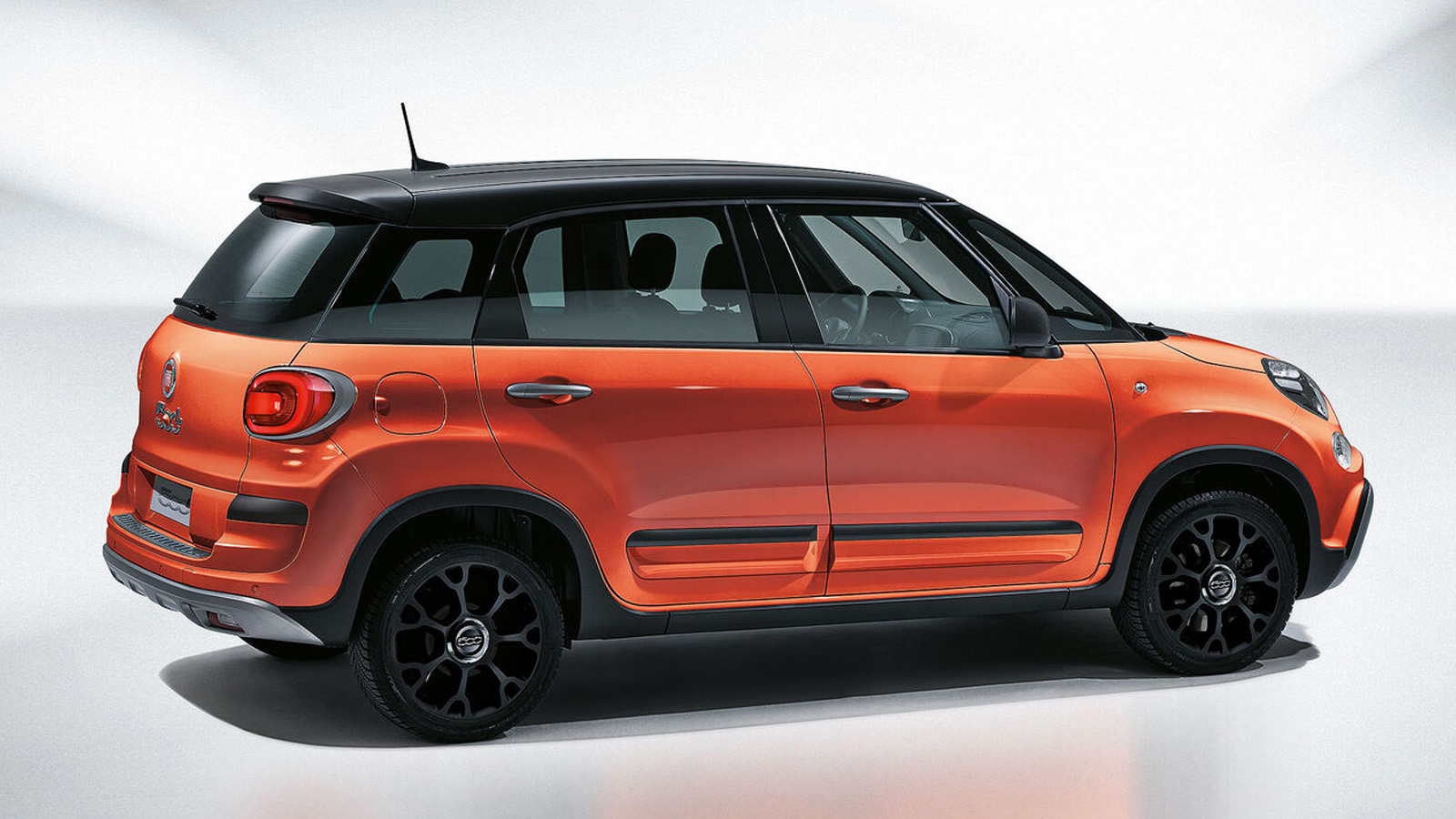 When I drove a manual 500L way back, I thought it reminded me of my Scion xB: useful, practical, airy, open, comfortable, and surprisingly fun. Humble, unpretentious, non-judgemental. The 500L was not a dickhead. And I think that’s not something you can say about many, many cars on the market today. [Editor’s Note: I thought the shifter felt like a toy — slidey, with little notchiness/feedback. But I didn’t hate the car. -DT].

So, sure, go ahead and laugh at the 500L. Call it names, roll your eyes, whatever makes you feel better. The truth is the 500L is secure with who it is, and if you have enough security of your own to drive one, and really understand the point of the thing, I bet you’d like it. I mean, how much more invigorating is driving a Nissan Rogue, anyway? It’s not.

I'm a co-founder of the Autopian, the site you're on RIGHT NOW! I'm here to talk to you about taillights until you cry and beg me to stop, which I absolutely will not. Sorry. Hug? Also, David's friend.
Read All My Posts »
PrevPreviousDodge Neon ACR Racing Champion Tells Us Why The First-Gen Neon ACR Was A Wolf In Economy Car Clothing
NextWhat The Hell Is Going On Here: Cold StartNext