I think I must live on a mail route that doesn’t get serviced well, because I only just today got my July 4, 1908 issue of Automobile Topics Illustrated, my usual go-to source for plagiarizing top-quality car content. I’m used to them being a bit late, but I’m going to have to talk to the genetically-engineered mule-human hybrid that delivers my mail, because 114 years late is just a little too much, even for me. Oh, but I can’t stay mad at that big long face, wearing that mailman hat with the cut-out ear holes! It’s fine. Besides, I saw some ads in this issue that confused the hell out of me, so let’s just talk about those. 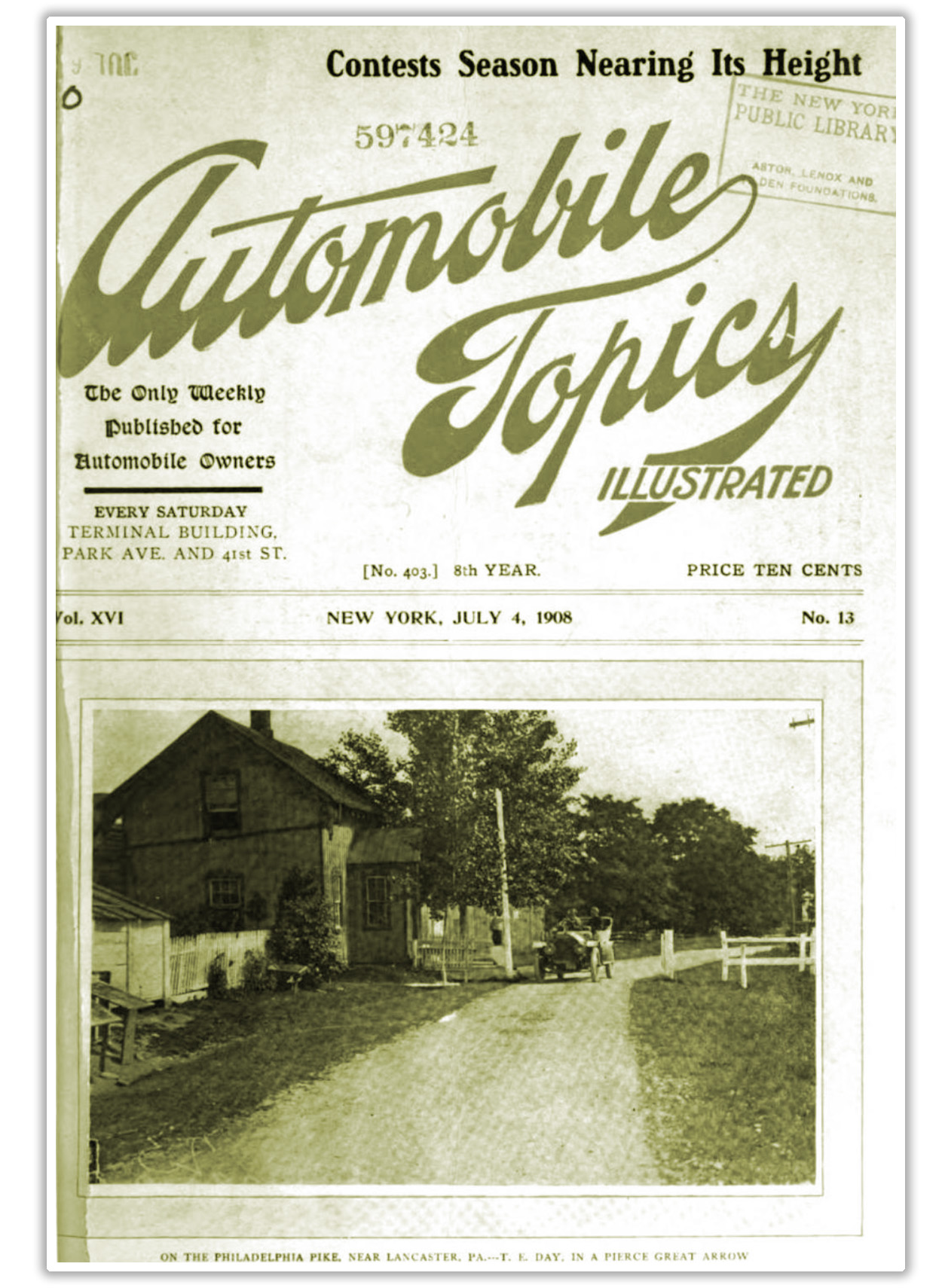 There’s the cover for the issue I was looking through, in case you feel like grabbing your copy and following along. Here’s the first ad that confused me: 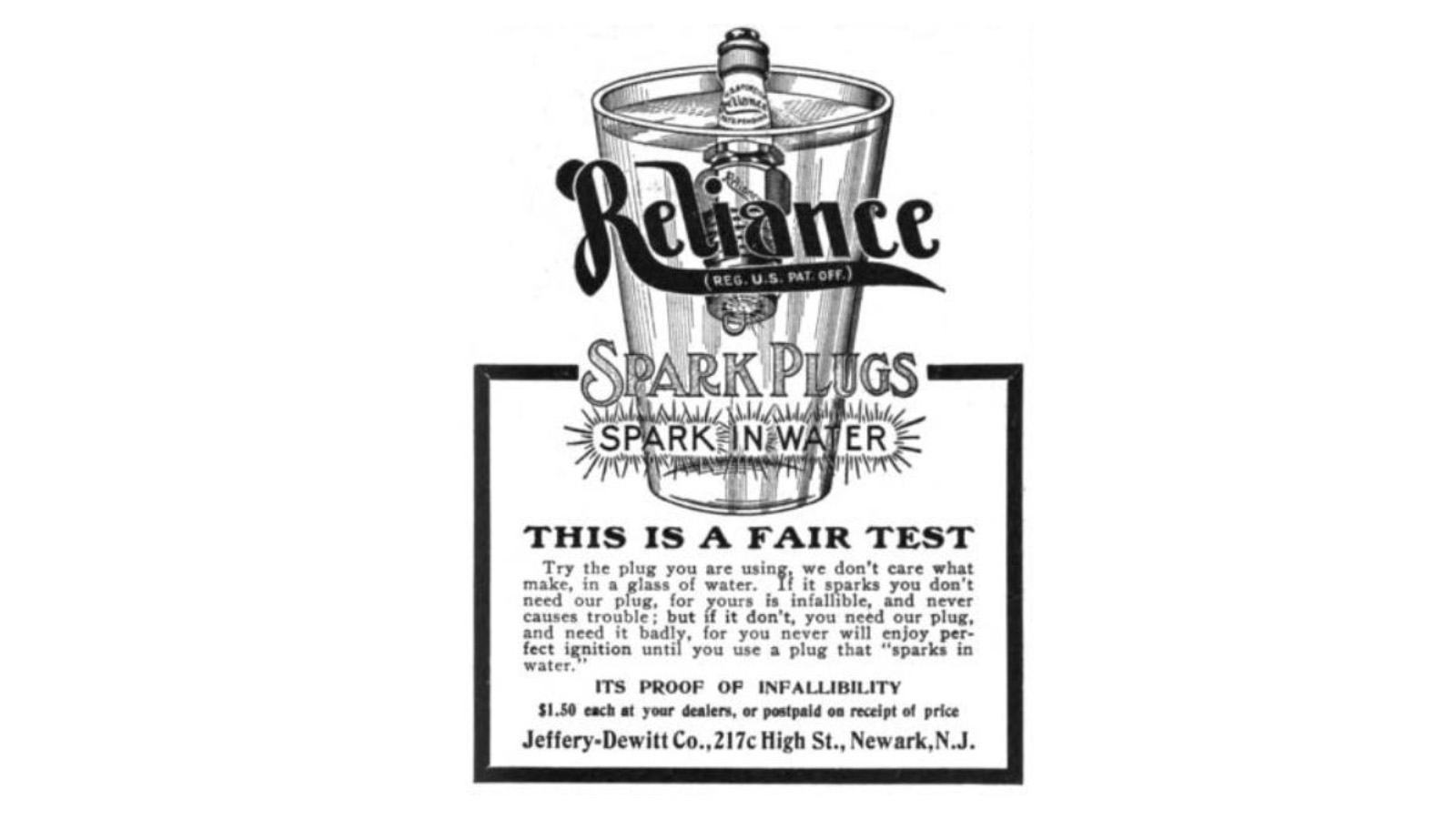 Okay, Reliance spark plugs SPARK IN WATER. Got it. I know the ad boldly claims THIS IS A FAIR TEST, but a fair test of what? If you have water in your spark plug holes or the cylinders, you have way bigger problems than a misfire. I mean, I guess that a plug that sparks while submerged in water is a good test of a plug that can, um, spark in water?

I’m not sure it’s “proof of infallibility,” and, besides, this process sounds kinda dangerous. I don’t really want to be messing with water and high-voltage electrical components, but maybe I’m kind of a candy-ass that way.

How are other spark plug makers advertising their shocky wares? 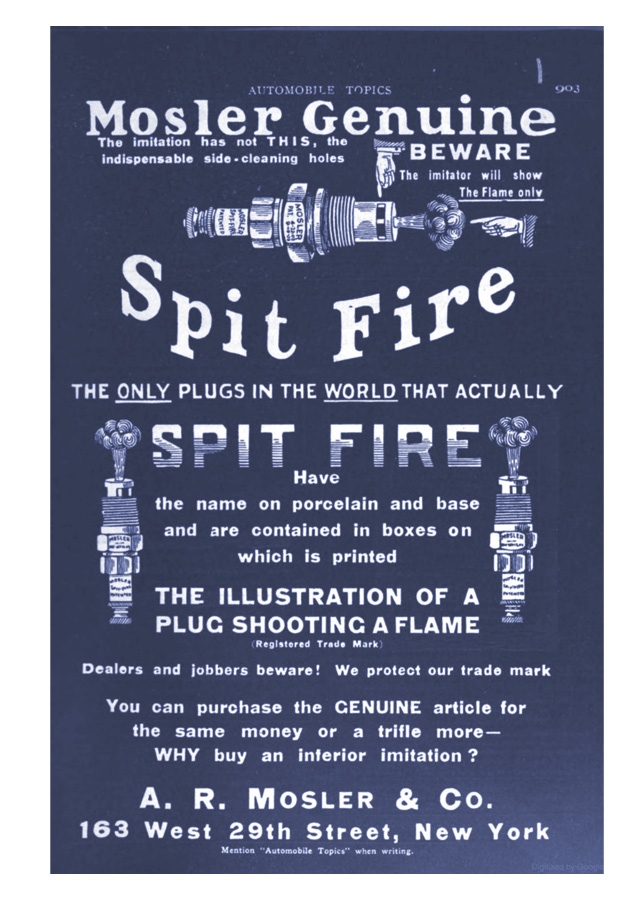 I like this ad because it says essentially nothing useful about the plugs themselves, and is just a desperate, frustrated-sounding reminder that the A.R. Mosler company is really sick of bootlegs and copycat spark plugs, none of which actually SPIT FIRE like a Mosler does, and according to those little pointing fingers, the “imitation has not THIS, the indispensable side-cleaning holes.” I guess this one doesn’t so much elicit confusion in me as it does sympathy for poor A.R. Mosler, just sick to death of all those terrible inferior imitators.

This one, however, does confuse me: 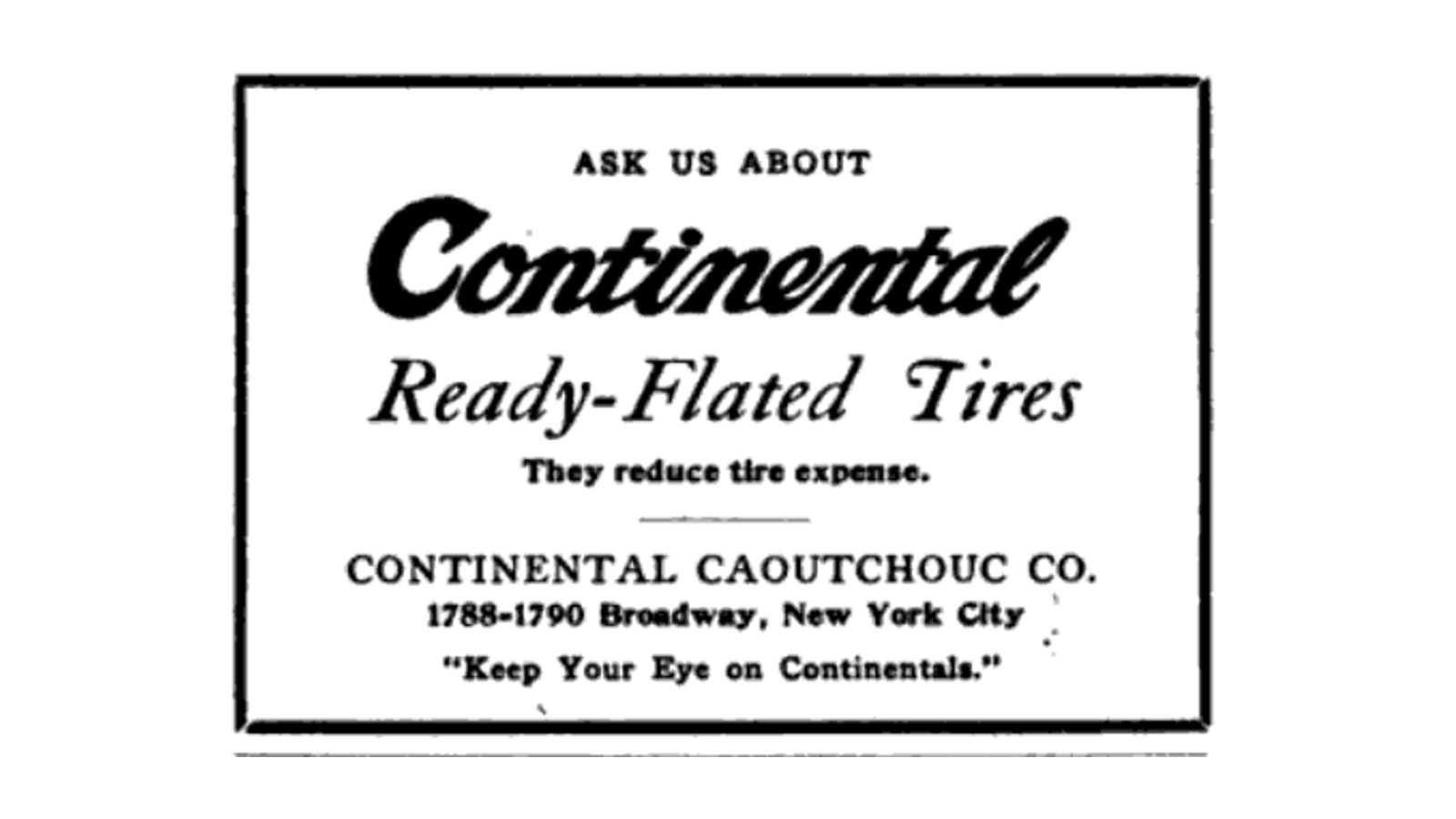 The fuck does “ready-flated” mean? Continental is certainly a well-known tire brand, but they seem to have pretty comprehensively distanced themselves from the “ready-flated” marketing approach. The closest I came to finding some sort of reference to this was in a 1908 issue of The Automobile, which had an article that mentioned “Continental ready-inflated replacements” in an article about a road race in Lowell, Massachusetts. So maybe “ready-flated” was just Continental’s kicky marketing term for an already-inflated tire? I guess in the days of tires with inner tubes, you could have your spare tires filled with delicious, creamery air, right from the factory?

Maybe. Okay, but here’s the one that really made my brain hurt: 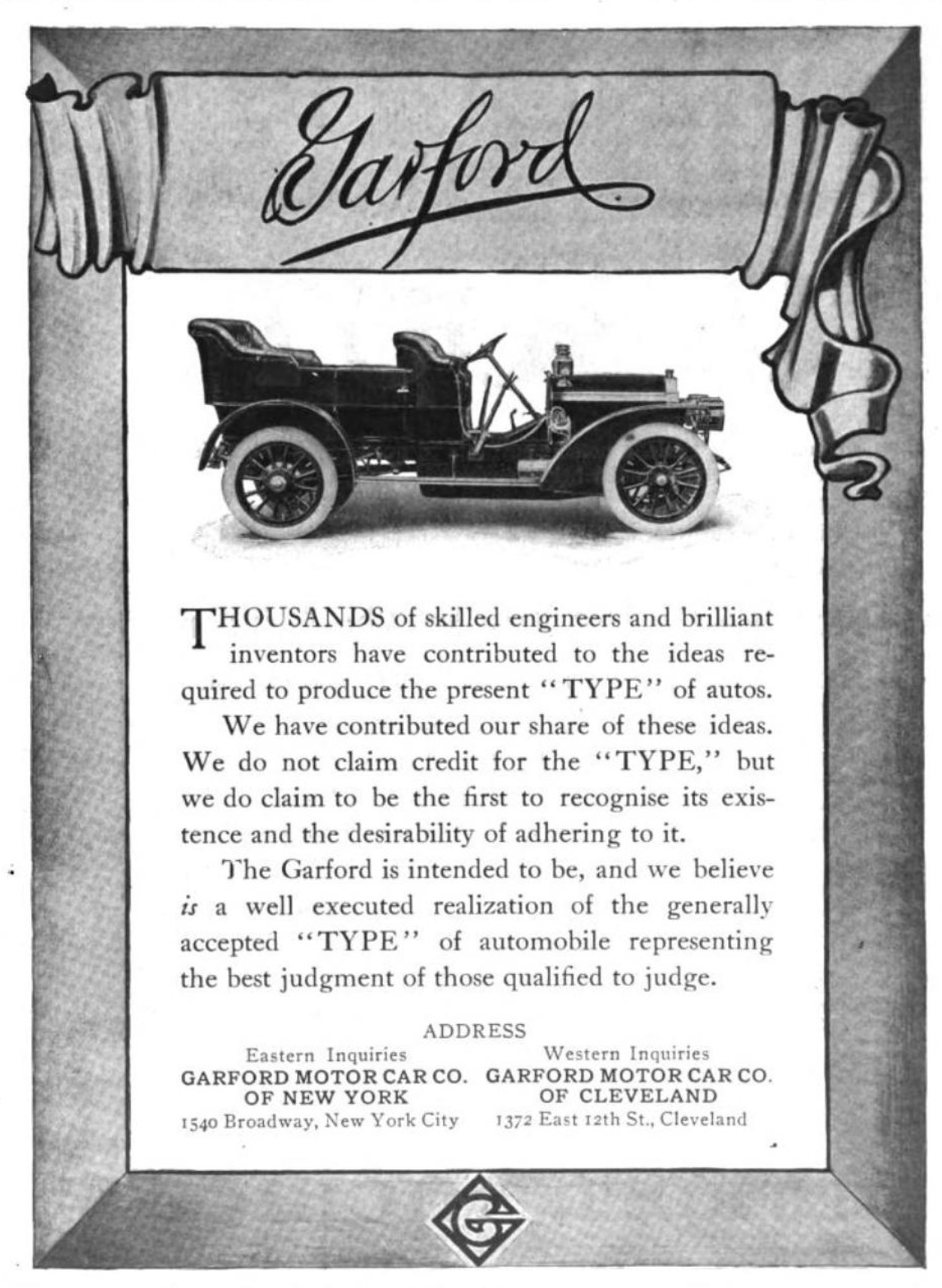 This is an ad for the little-remembered Garford Motor Car Company of Elyria, Ohio. They may be best known for their joint operations with Studebaker between 1904 and 1911. Garford made the chassis for Studebaker, which finished the cars and sold them under their own name, but Garford sold cars under their own brand as well.

This ad is for one of those, and it’s the ad’s copy I find so confusing. In case you can’t read it on the image up there, here’s the text:

THOUSANDS of skilled engineers and brilliant inventors have contributed to the ideas required to produce the present “TYPE” of autos.
We have contributed our share of these ideas.
We do not claim credit for the “TYPE,” but we do claim to be the first to recognise its existence and the desirability of adhering to it.
The Garford is intended to be, and we believe is a well executed realization of the generally accepted “TYPE” of automobile representing the best judgment of those qualified to judge.

What the fuck are they talking about here? What do they mean by “TYPE?” Is this ad just saying, cars are generally like this now, in style and technical specification, and we make cars that are generally like what you expect cars to be, and we think we make good versions of that?

Is that what they’re getting at? If so, is it possible to have a more generic, unspecific ad? I guess those Toyota Yaris ads that just crowed It’s A Car! may be the closest? You know, these:

Garford didn’t make it past 1914 or so, but this ad did send me down a bit of a Garford rabbit hole, where I learned about one of their last-ditch cars, popularly known as the One-Eye Garford for obvious reasons: 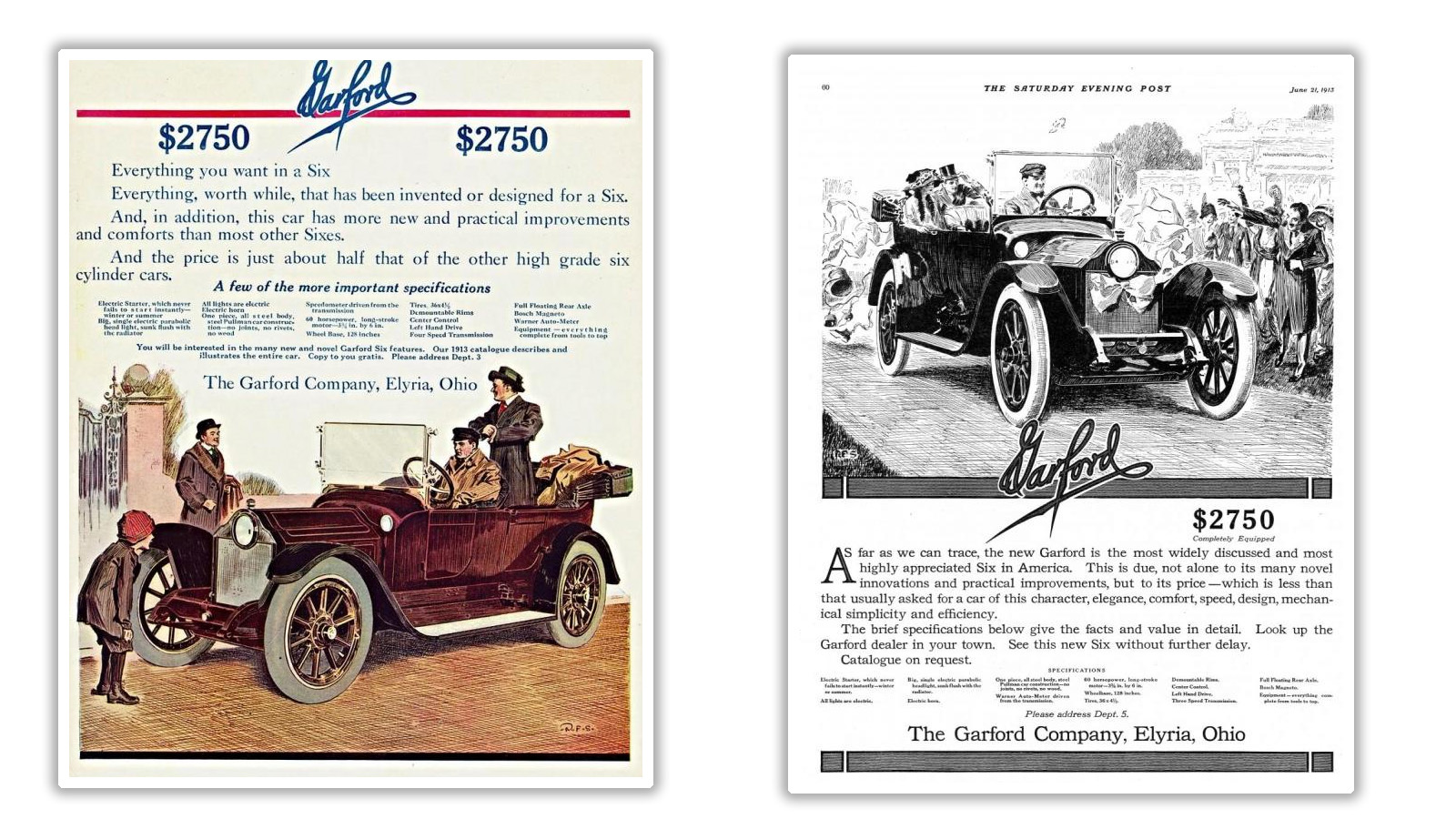 This cyclopean Garford from 1913 has been reported to be “built in batches of ten thousand, a first for the automobile industry” but this is suspected of being just, you know, lies, at least in part because there’s (seemingly)  absolutely none of these left and it’s suspected they hardly sold at all.

That headlight inset into the radiator could also be one of the very first examples of lighting integrated into the body of a production (well, if it was produced) car. It must have been separated from the path of water that would have filled that radiator, somehow.

Anyway, if anyone has insight about any of these ads, please tell me in the comments, because my brain aches.

I'm a co-founder of the Autopian, the site you're on RIGHT NOW! I'm here to talk to you about taillights until you cry and beg me to stop, which I absolutely will not. Sorry. Hug? Also, David's friend.
Read All My Posts »
PrevPreviousOur Daydreaming Designer Imagines Bricklin’s Vision Of A Yugoslavian Built Safety Car
NextWhat The Hell? Is This A Cock Fight In An Old Triumph Motorcycle Ad?: Cold StartNext