Welcome to another edition of Shitbox Showdown! Today’s search takes us to fabulous Las Vegas, home of cheap buffets, a giant black pyramid, Penn & Teller, and, apparently, oddly-hued cars. But before we hit the bright lights, let’s finish up with yesterday’s odd couple:

As I suspected. However, I was in a hurry and didn’t notice what some of you pointed out: there’s no way in hell those photos were taken in northern California. This little yellow Jeep might not be on the up-and-up after all. You know the old saying: if it seems too good to be true, it usually is.

Well, with that minor disappointment out of the way, let’s roll the dice on a couple of pink cars from Sin City. OK, fine, one is only partially pink. It’s also the newest car we’ve ever featured here, but boy does it have some miles on the clock. Let’s take a look. 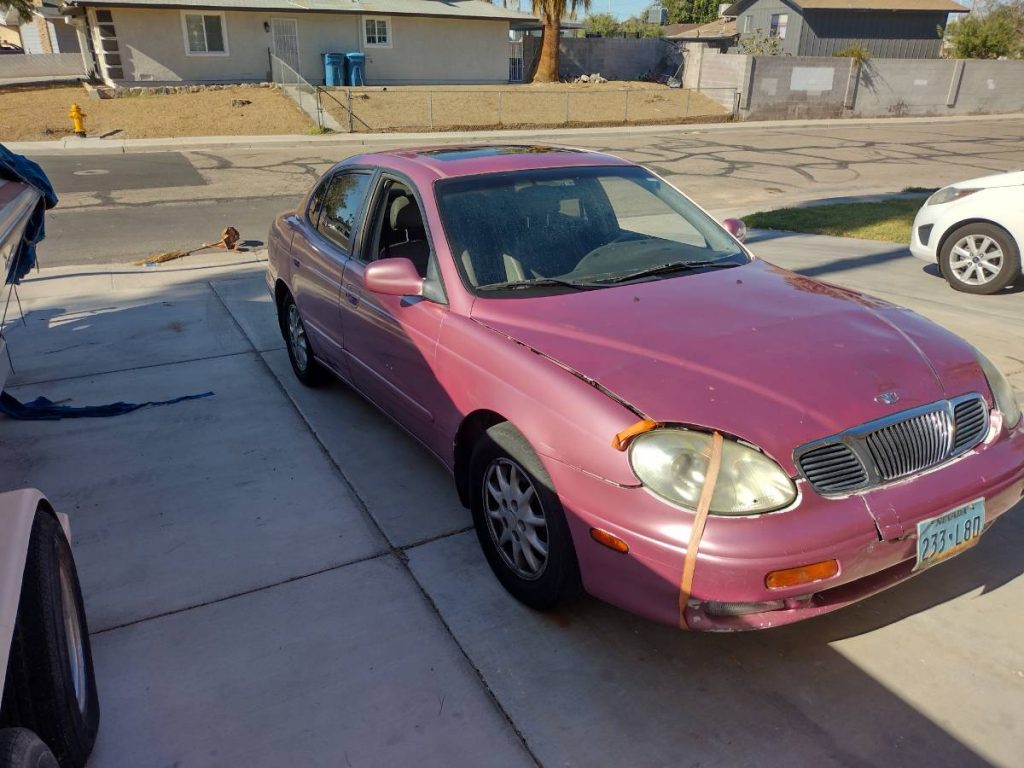 Daewoo’s foray into the US market only lasted for five model years. Three models were offered here, in order of ascending size: the Lanos, the Nubira, and the Leganza. Marketed heavily on college campuses and priced less than comparably sized and equipped cars, Daewoo should have made it. But the marketing didn’t work, the college kids who were recruited to sell Daewoos on college campuses sued the company, and the cars themselves, quite frankly, sucked. And having a logo that either looked like tighty-whiteys or a jock strap, depending who you asked, probably didn’t help. 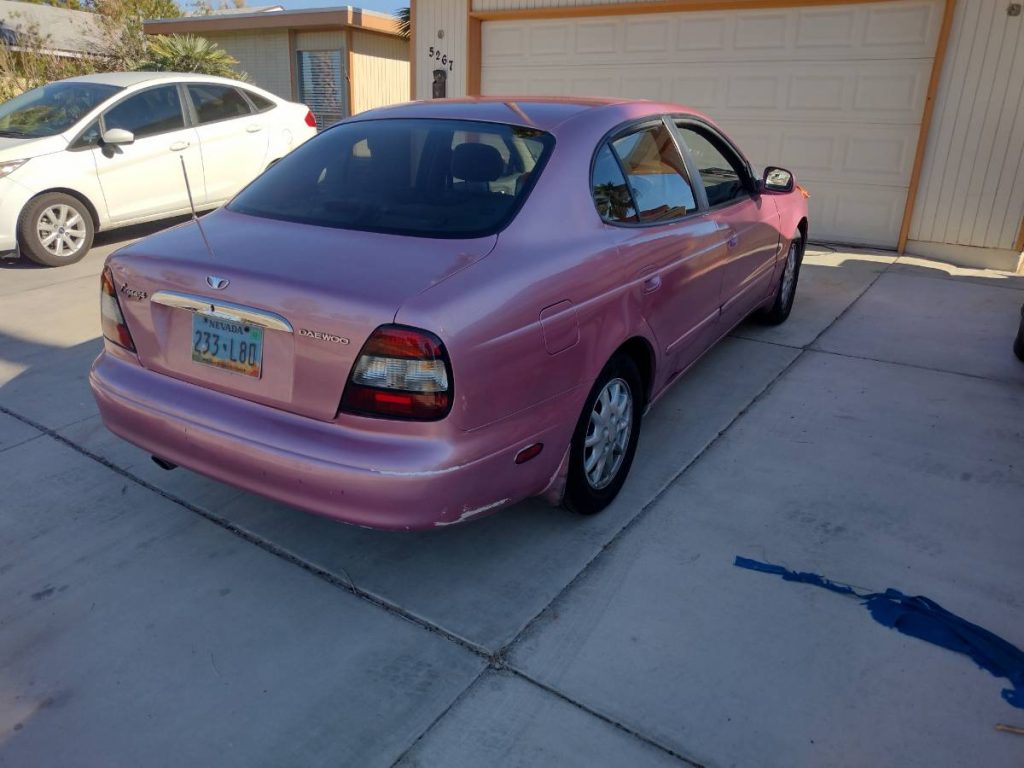 Most Daewoos didn’t last long; despite selling almost 70,000 cars the year this example was sold, they were a rare sight by the mid-2000s. The Leganza seemed to fare better than the smaller cheaper models; whether they were actually better built or just better cared-for, it’s hard to say. I seem to remember seeing one on the road here in Portland recently, but it might have been a couple of years ago now that I think of it. 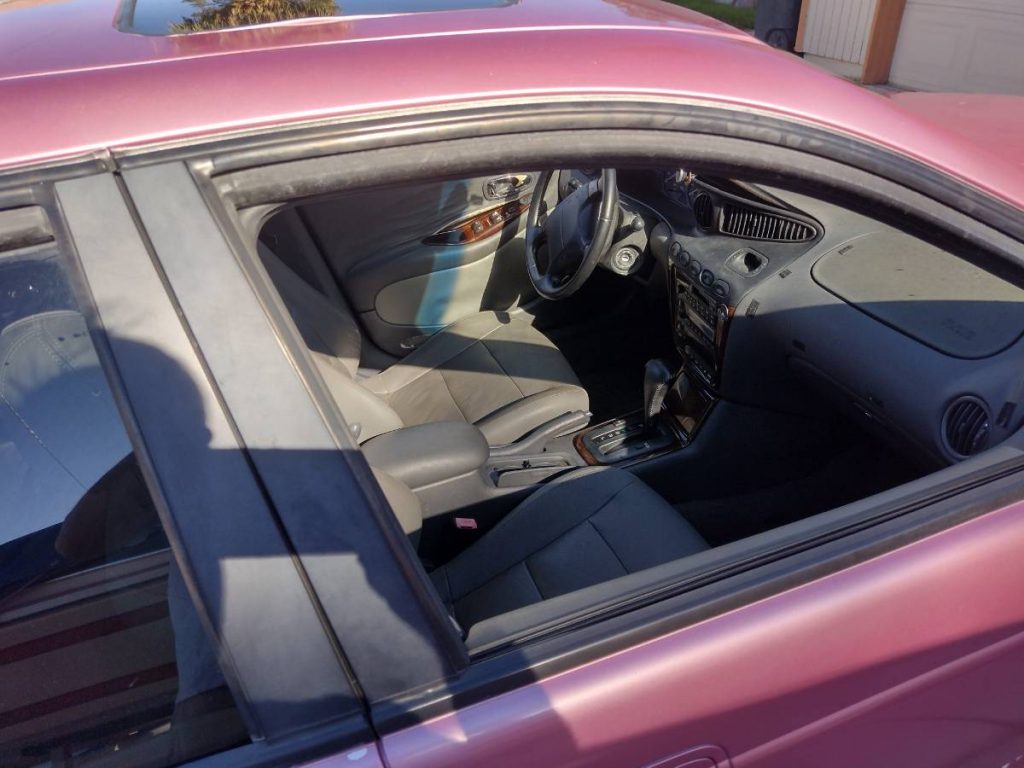 And yet, here in the Vegas suburbs, here is a low-mileage Leganza, being driven regularly. And even better – it’s pink! I can’t say for sure if it’s the original color, but the door sills match. There is some white paint showing on the plastic bumpers, but they could be white plastic for all I know. The interior looks pretty decent, frankly, which might be due to the low mileage. 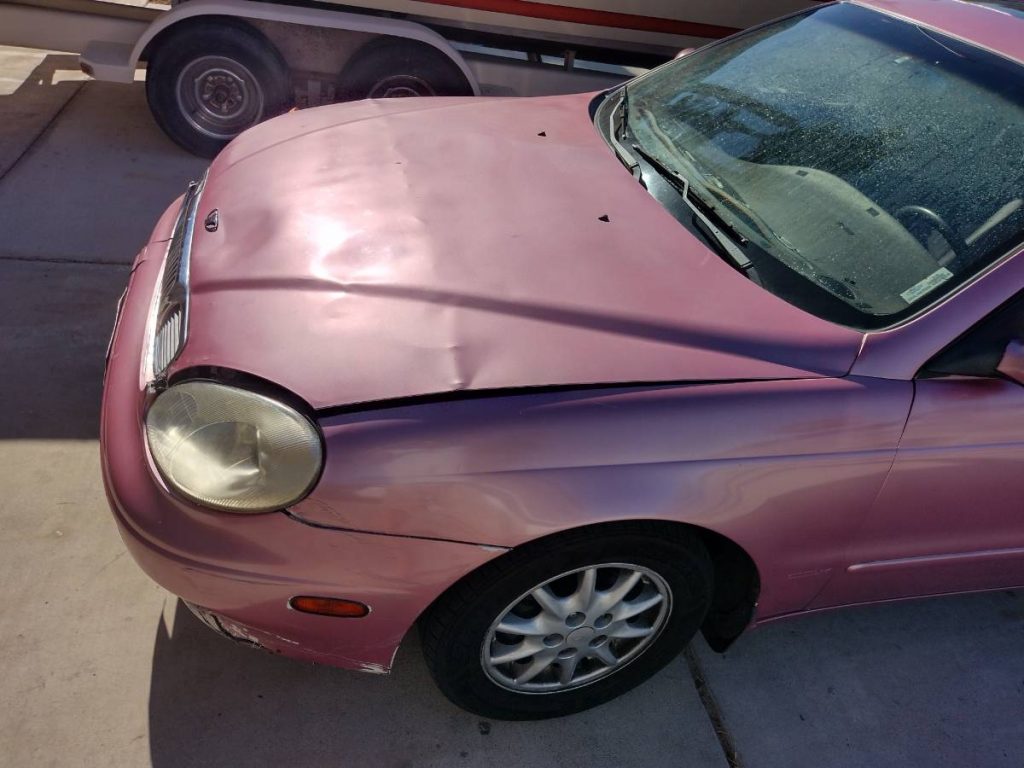 Outside, things aren’t quite as, well, rosy. The paint is shiny, but the car has been booped in the nose pretty hard. There is a crease in the hood, and we have no way of knowing if that orange strap is holding the bumper on, the headlight in, or the hood shut. The seller says it runs well, but has a little coolant leak from somewhere.

Two fun facts I learned about the Leganza while reading up on it: the engine came from Holden in Australia (GM owned Daewoo at the time), and the styling was done by Giorgetto Giugiaro (who has one hell of a curriculum vitae). Didn’t help, but it’s interesting. 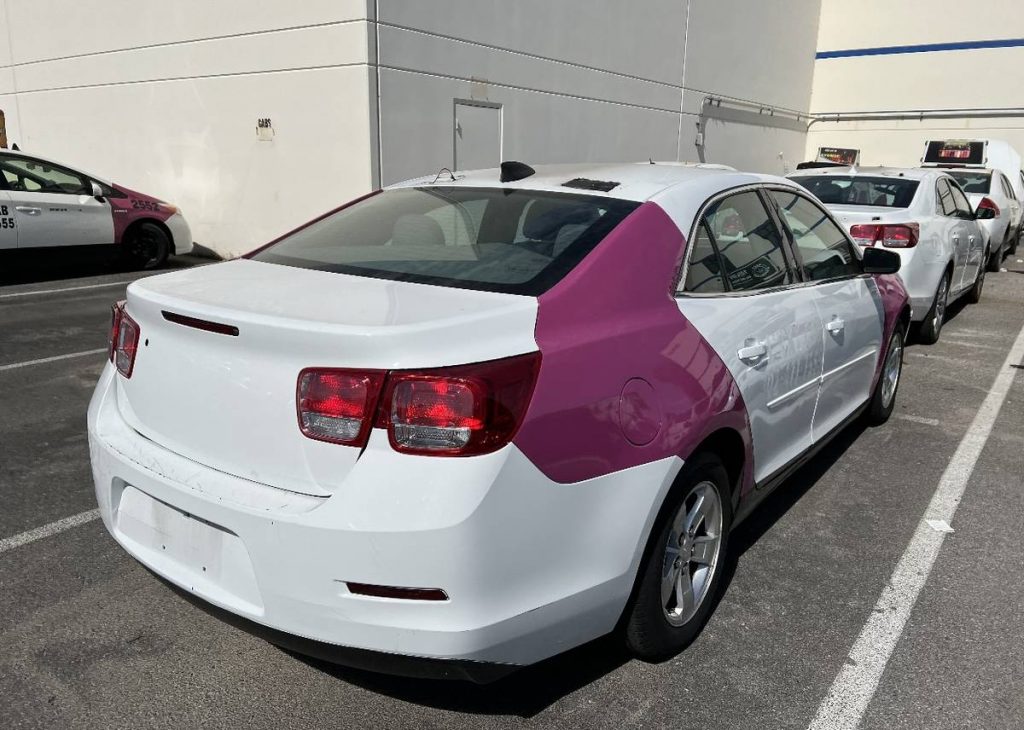 Quick – name the hardest-working car you can think of. Police car? Nope. Delivery van? Ha. This two-colored Malibu has them both beat: It has spent its seven years since leaving the factory as a taxicab in Las Vegas. The odometer shows 280,000 miles, and you just know it spent even longer idling outside the airport and in various taxi lines at various casinos. It has ferried everyone from businessmen to bachelorettes all over Vegas at all hours of the day, and it lives to tell the tale. 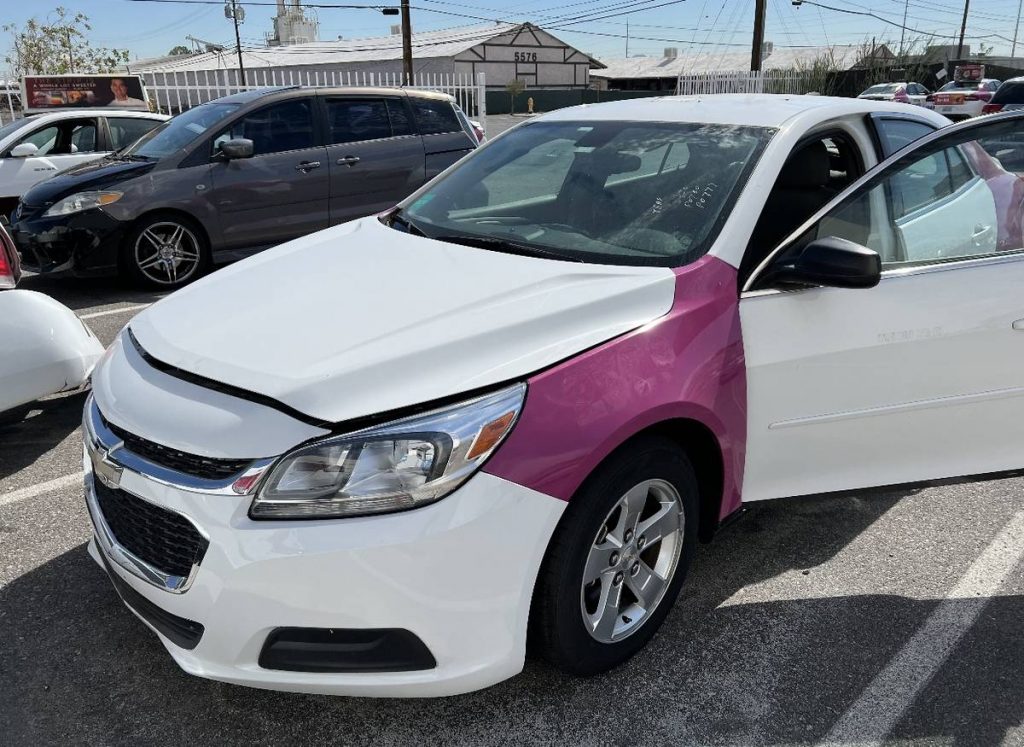 Well, I think it lives. The ad doesn’t specifically say it runs, but I can’t imagine they’d have the guts to sell a non-running car for $2500. This generation of Malibu is powered by a 2.5 liter revised version of GM’s Ecotec four-cylinder, sending its power through a six-speed automatic. It’s not the most exciting powertrain of all time, but 280,000 hard miles speaks highly of its durability. 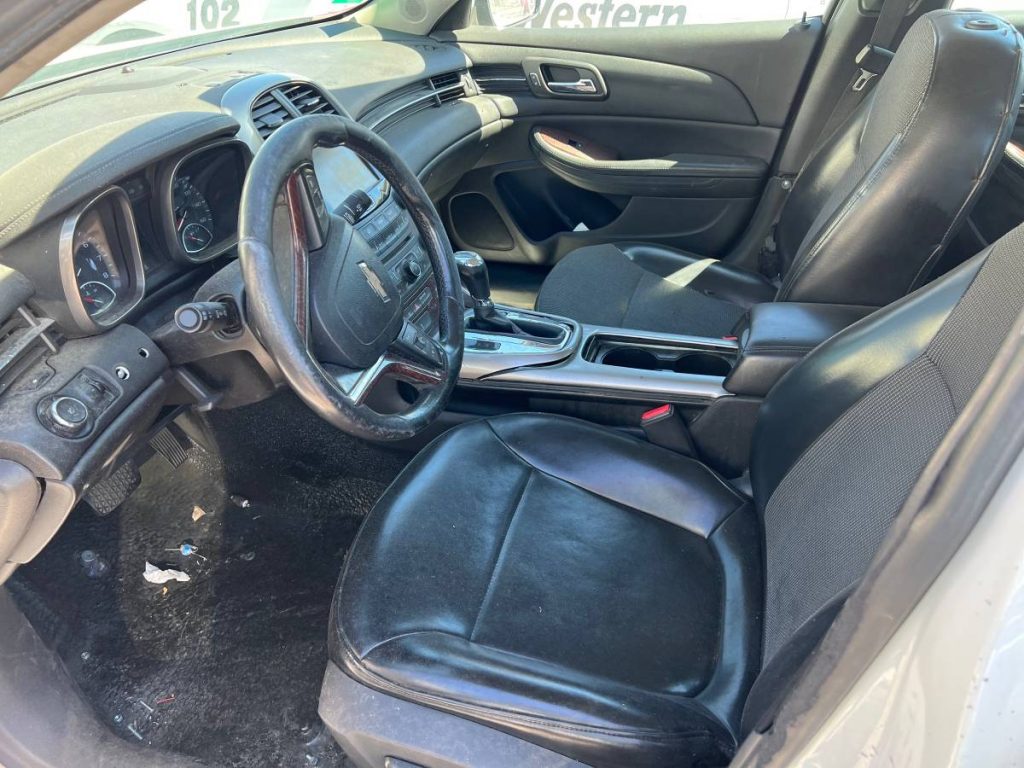 Inside, things look… sturdy, like a police car or some other no-nonsense fleet vehicle. It has held up well, from what we can see, but the seller doesn’t include a photo of the back seat, which seems important given its history. The outside is clean and damage-free, but it is that wild two-tone pink and white. 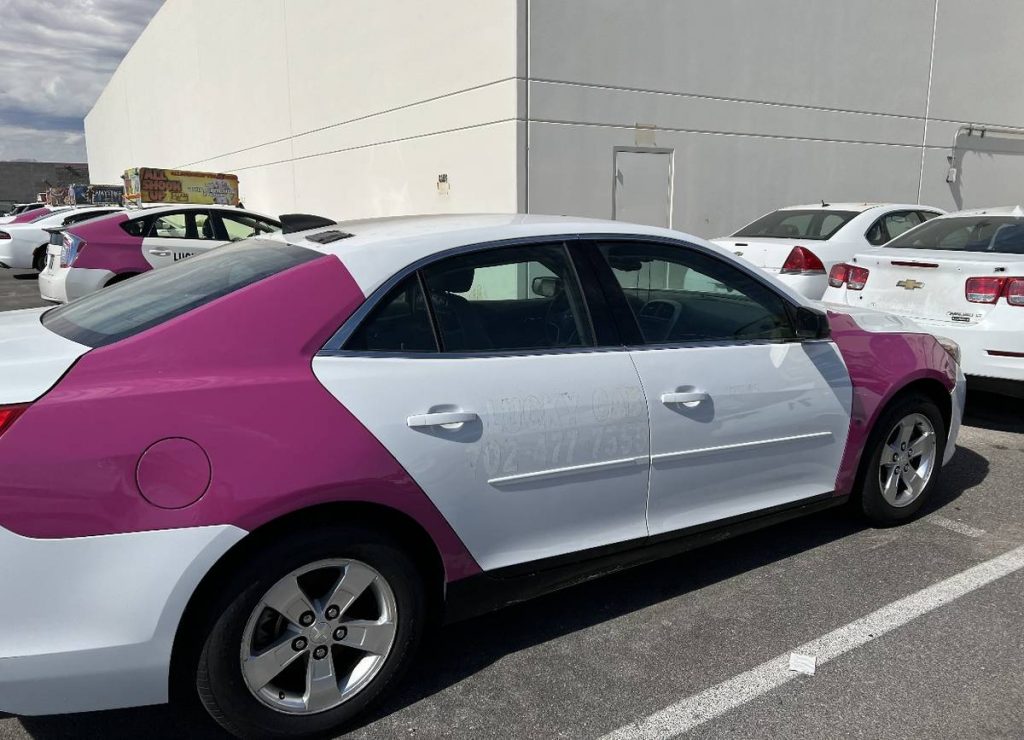 No one can say if this car still has any life left in it, at least without a test drive. But it would be sort of interesting to have a colorful car with such a colorful past.

Well, there they are. I can’t say either of them is exactly a good choice, but if you’re expecting decent cars featured here, you haven’t been paying attention. What’s it gonna be?