There’s something about the challenge of identifying cars by tiny pieces that clamps onto my attention and holds, ferociously, like a Pomeranian on a dropped hot dog. Yesterday I was feeling pretty smug because I just identified four really obscure cars procured by our partner Beau (more on those soon!) from just taillight pictures, so I was pretty cocky when I encountered this challenge: identifying part of a van in a river. And it kicked my ass brutally, and I think with some glee. So now I want your help, Autopians. We can’t let river van win.

The van came to my attention via the Twitter account of my friend Emily (who is an absurdly talented tinkerer and builder of things, just so you know) who noticed the van-chunk as it was revealed in an unusually low LA river:

The water level in the river is low enough because of the drought that the dismembered remains of a car have appeared, much like the body in a barrel recently revealed by the drought in Lake Mead, though less gruesome.

It looks like it was some kind of panel van maybe pic.twitter.com/QGzwbwIkue

We don’t get to see much of the van at all; in fact, what’s not hidden by water appears to have been partially bisected by either human hands wielding a Sawzall or the bite of a terrifyingly large kaiju of some kind. So, we’re really only dealing with, like, 1/8th of a van here, at best. [Editor’s note: Looks like more than 1/8. Also “bisect” means split in half. I’m going with 1/3 of a van, here. -DT]

Still, that should be enough to identify this. As I said, I just identified several obscure cars based on about six square inches of area [Editor’s note: Enough with the bragging! How many days of this will I have to endure?! -DT]. This should be possible! And yet, it’s proving very difficult, mostly because of one key detail. 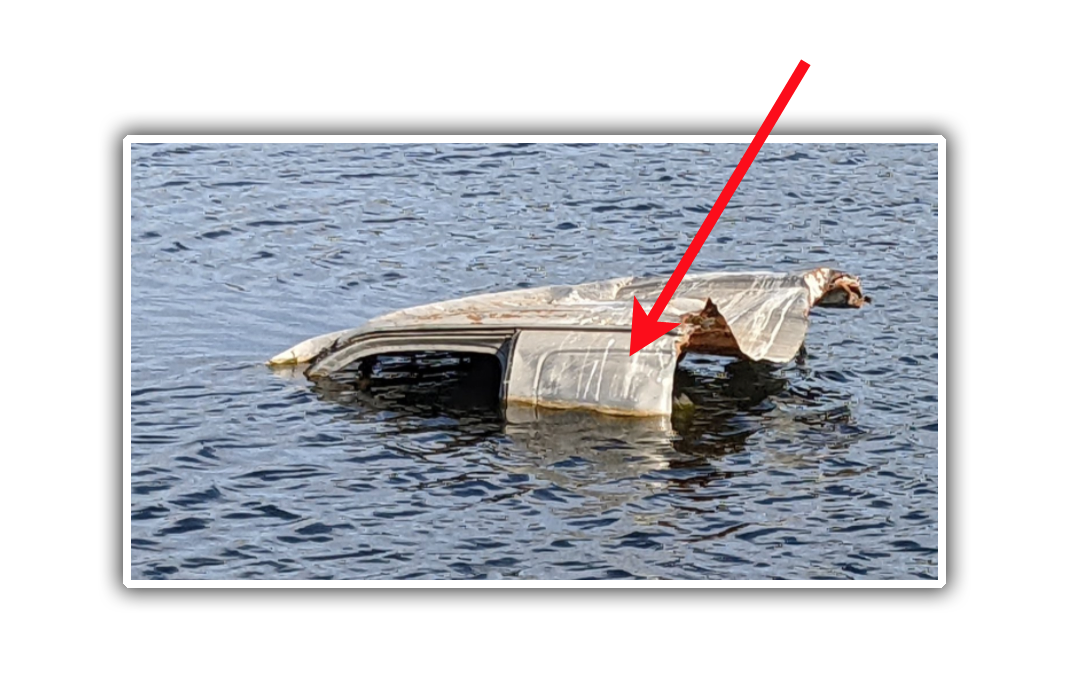 The detail is this stamping right there, as indicated by the arrow. It’s the place where a window would be punched out in passenger versions of this van, but as this seems to have been a cargo version, it wasn’t. It’s a common thing to see on panel vans. Here’s a similar one on a GMC Savana/Chevy Express: 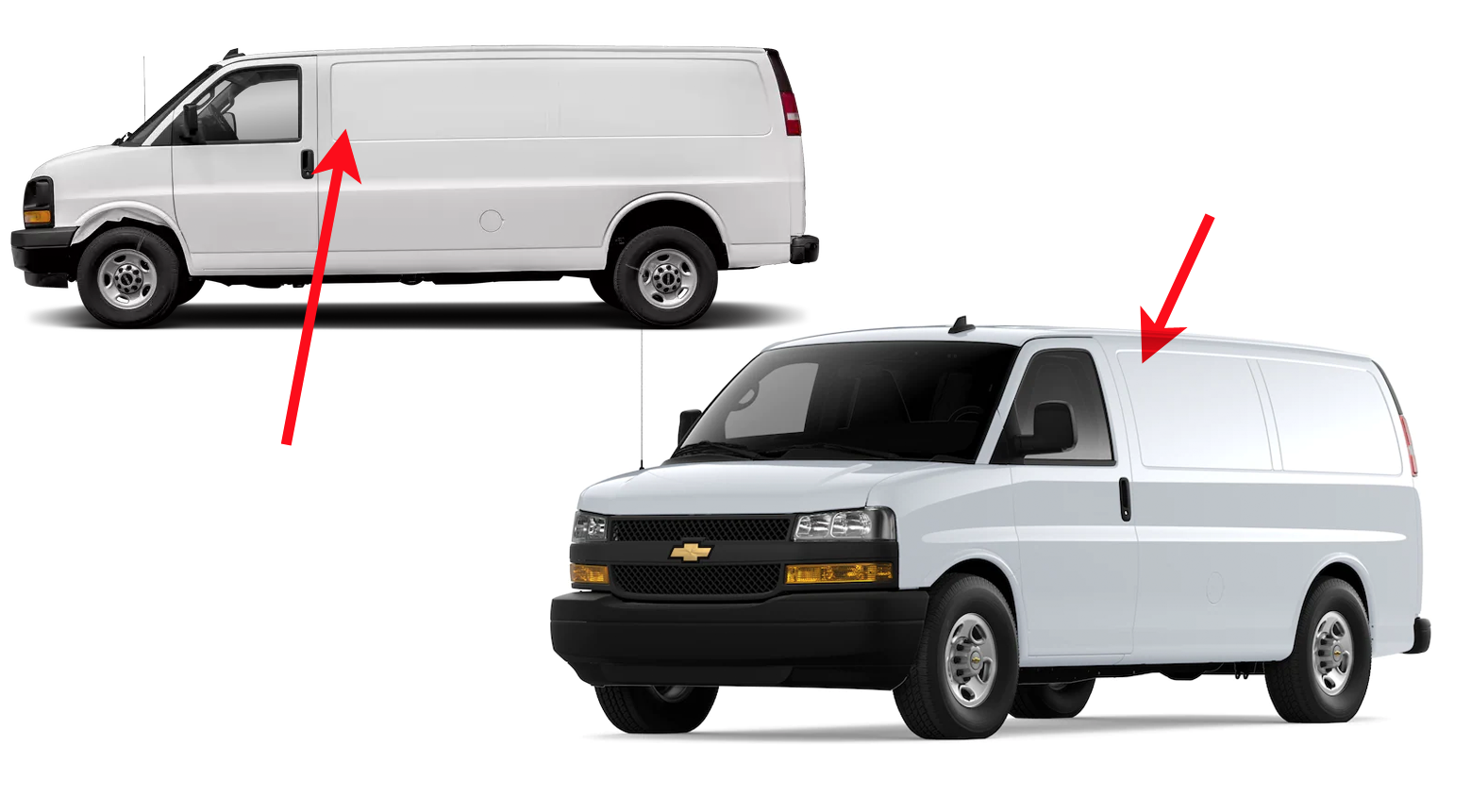 Same idea, but not the same van, as you can see that one in the river there is a much smaller window-area stamping with a much larger corner radius. The sorta B-pillar area (well, where the pillar would be if the window was actually stamped out) is much thicker. So, it’s not one of these.

Could it be a low-roof Ford Transit Connect? 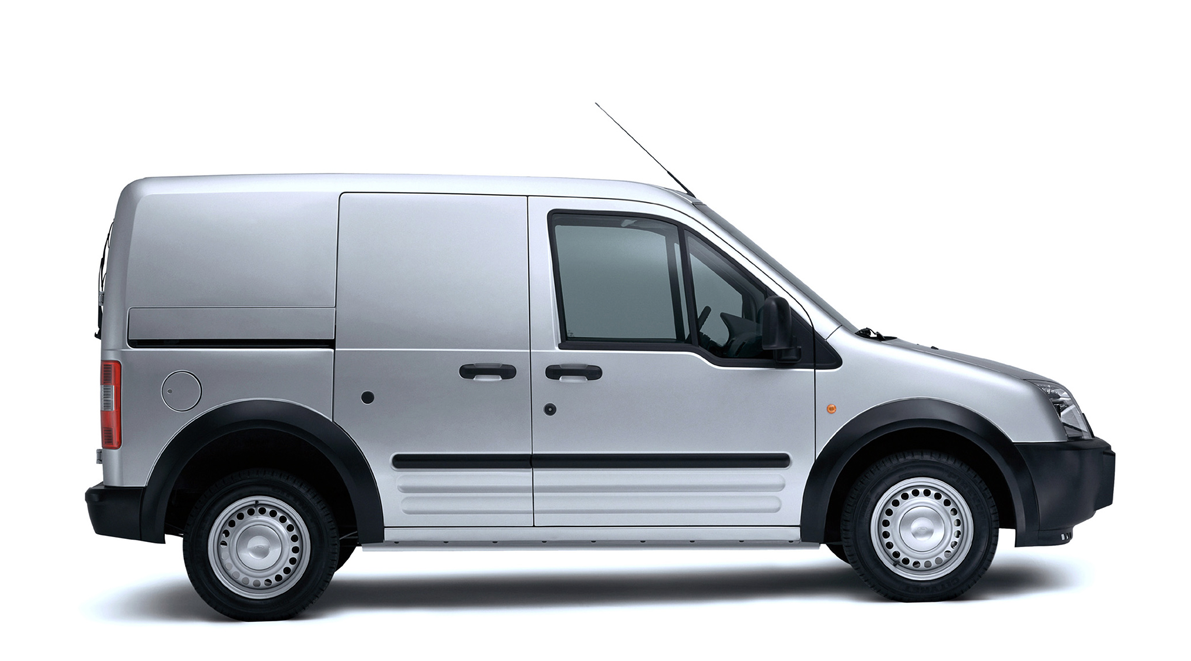 No, those don’t even have any window stamping area on the windowless versions. 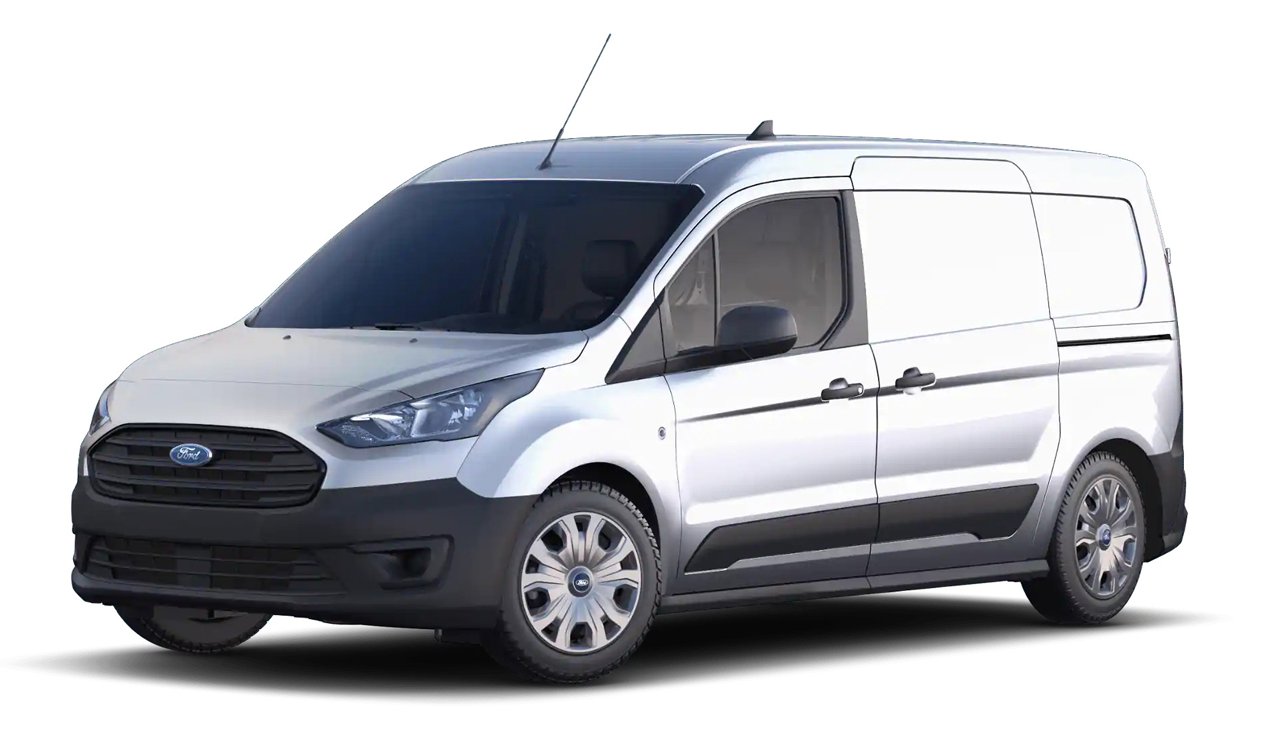 It’s not the newer version, either.

Nope and nope. Wrong shape for that stamping. Maybe the bigger Nissan van, the one with the stupidly-long hood? The Nissan NV? 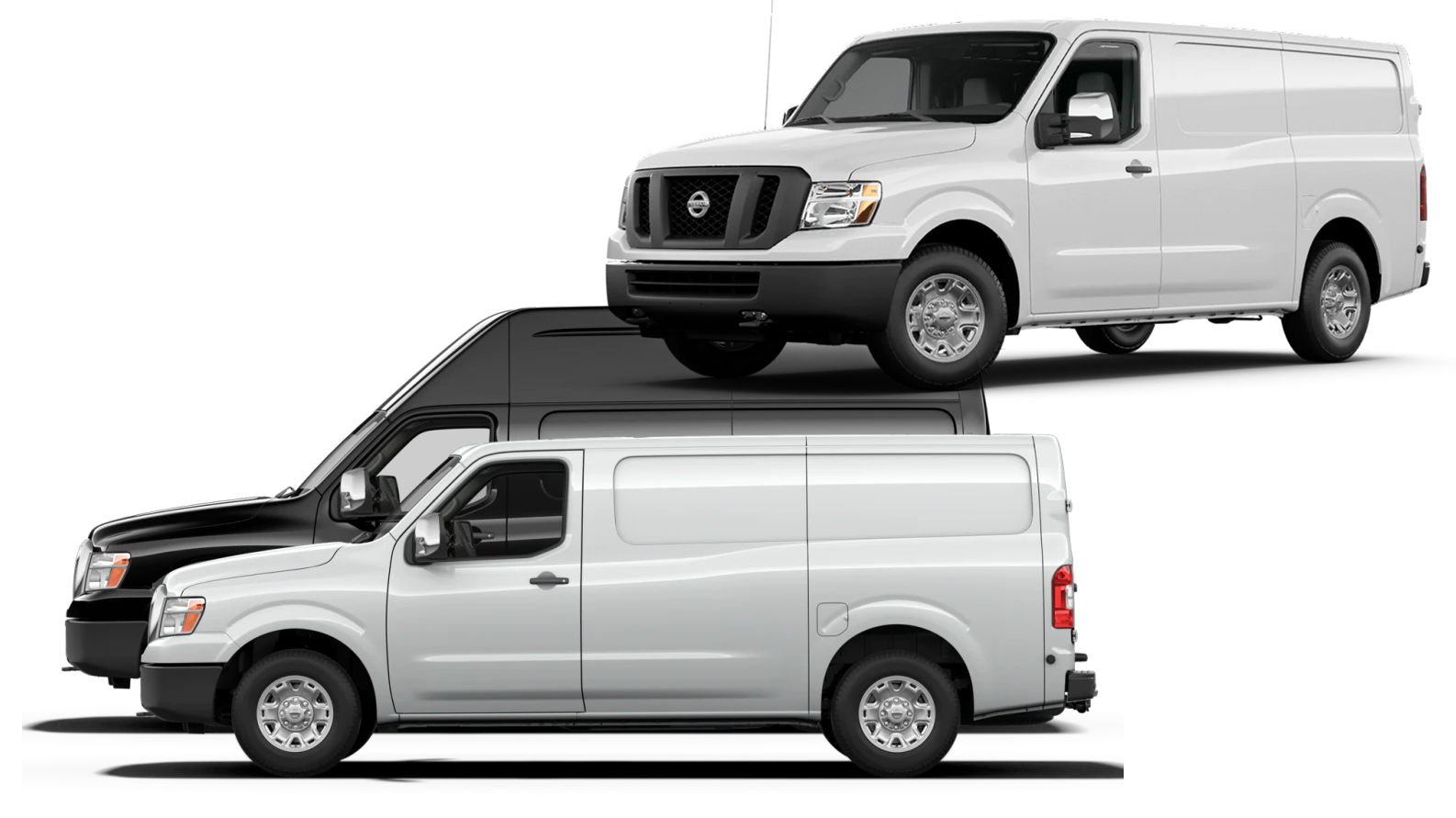 That’s close, but now I’m not sure about the slope of that A-pillar, which seems to have a steeper rake than the NV. That, and there seems to be a much more prominent rain gutter between the roof panel and the side, which the NV lacks. So I don’t think this is our answer.

What the hell else could this be? LA sometimes gets Mexican-market cars sneaking over. Could it maybe be a VW Caddy?

Eeeeh, close but still not it. Am I thinking too exotic? Could it be a ubiquitous Ford Econoline/E-Series? 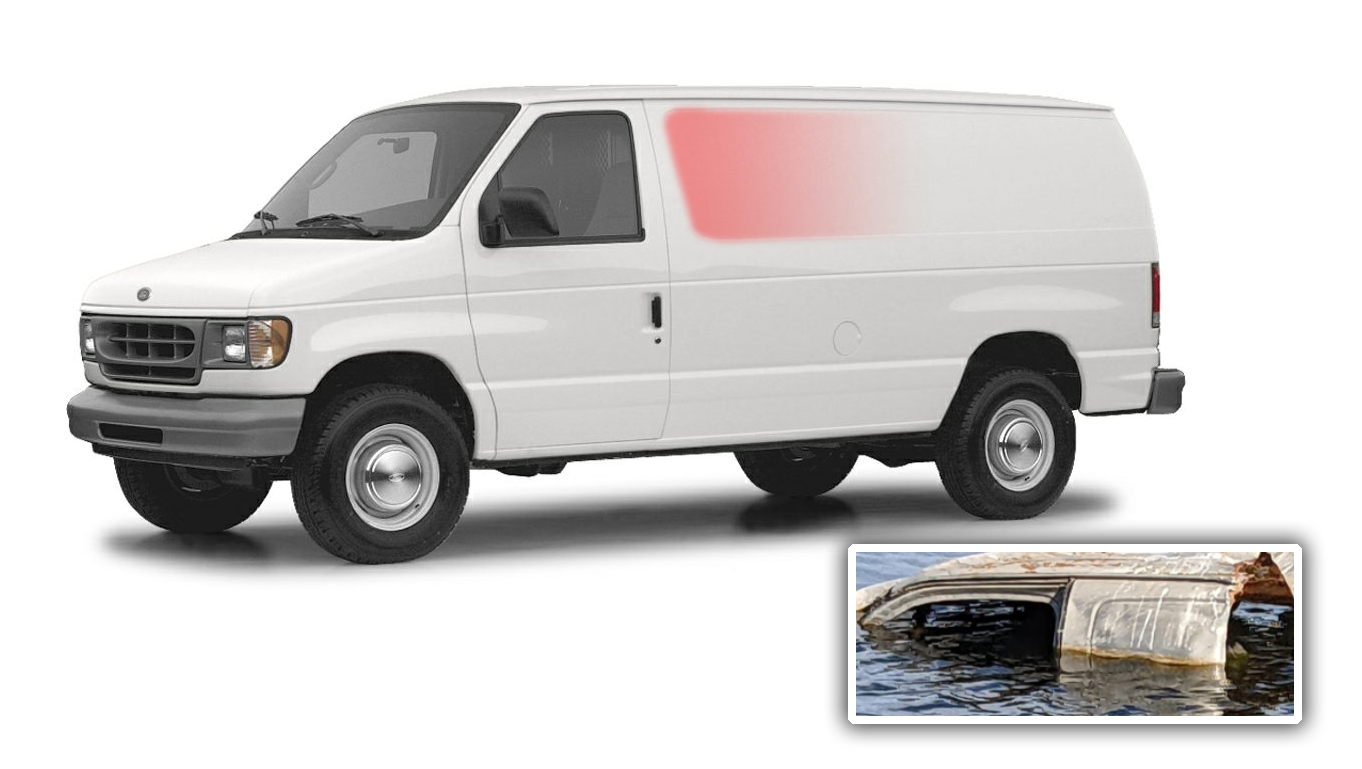 We’ve got the rain gutter, but that A-pillar isn’t right, and the shape of the window stamping isn’t either. Crap. Maybe that window stamping on the flooded van was hidden under an outer panel? But I don’t see any obvious mounting methods? 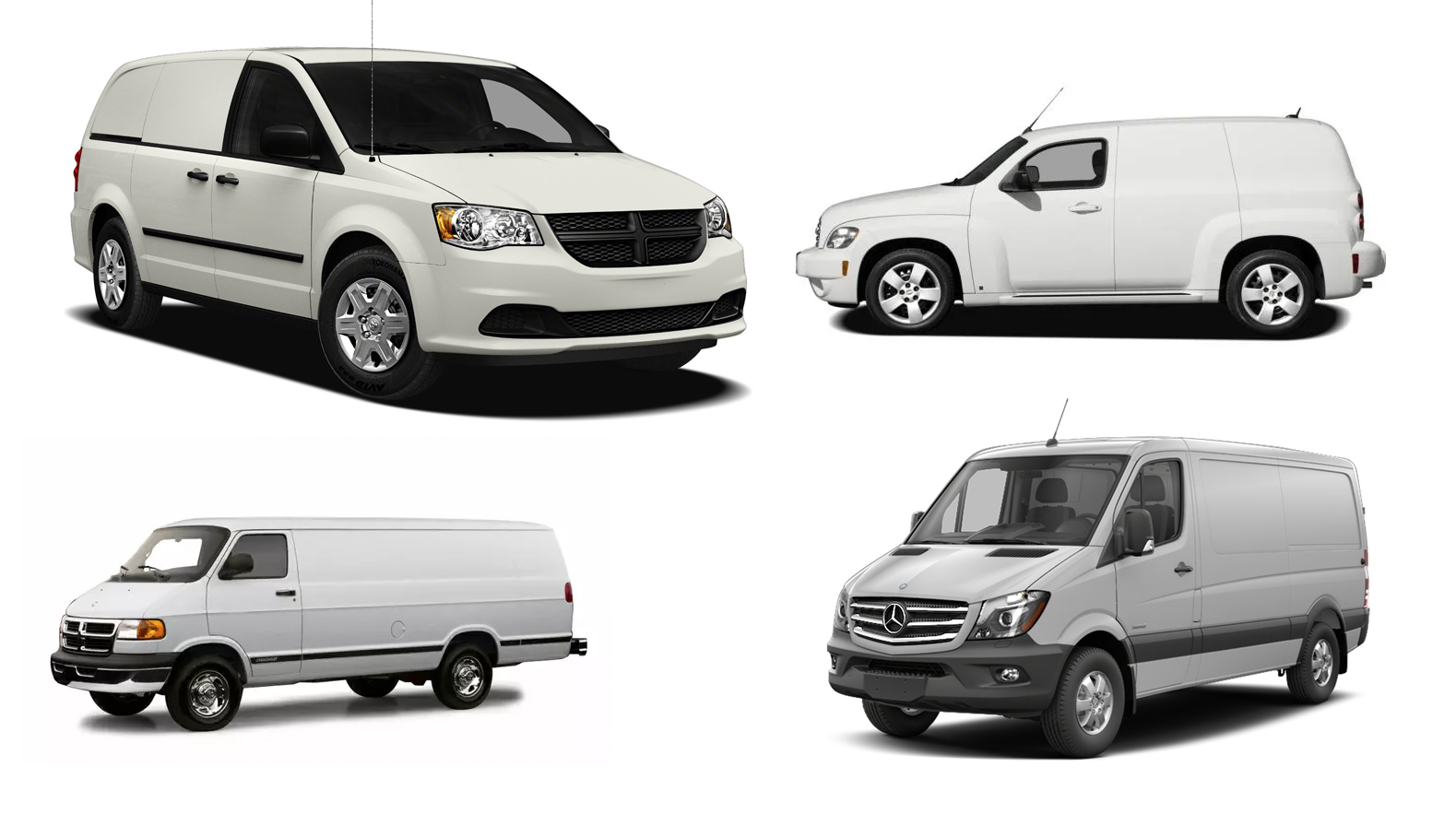 What other panel vans are out there? Why do none of these fit? Why is this so hard? What is that miserable, sunken half-van? What is its story, and what dark secrets did it take with it into the deep?

Someone help me out here. This is making me bonkers, and I know if anyone can help, it’s one of you crazy-ass Autopians, of which I bet there’s at least a few who fetishize panel vans and will recognize this as quickly as a photo of their own mom.

So, please, solve this and get it out of my head!

I'm a co-founder of the Autopian, the site you're on RIGHT NOW! I'm here to talk to you about taillights until you cry and beg me to stop, which I absolutely will not. Sorry. Hug? Also, David's friend.
Read All My Posts »
PrevPreviousThe 2022 Ford Lightning Is Just A Standard F-150 With An Electric Powertrain And That’s Why It’s Going To Change The World
NextA Passenger With No Flight Experience Just Landed An Impressively-Sized Plane At Palm Beach International AirportNext