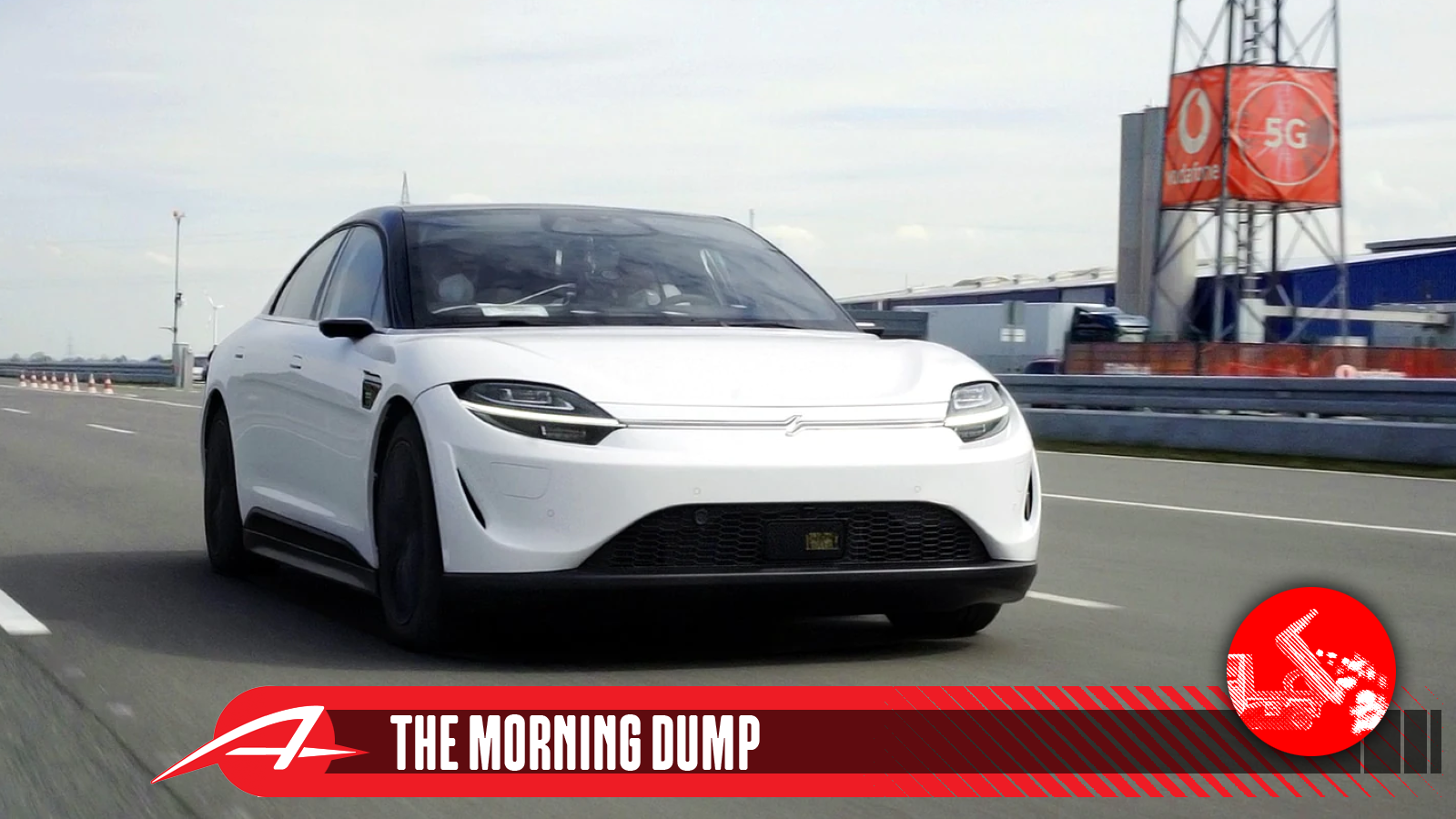 Sony and Honda finalize an EV deal, Citroën breaks out the beachwear, Ferrari firms up EV plans. All this and more on today’s issue of The Morning Dump.

Sony And Honda Make It Official

Good news for anyone beguiled by Sony’s Vision-S 01 and 02 concept cars, it looks like some sort of Sony EV will officially see production. While Sony and Honda previously announced plans for a joint venture, those plans have now been finalized. According to a press release issued by Honda, the new joint venture company will be called Sony Honda Mobility Inc. and plans to produce electric vehicles in 2025.

Honestly, a three-year period to develop a production-spec EV, homologate said EV, establish a distribution network, and build a new assembly line seems fairly aggressive, but Sony’s been working on EV tech for a few years now, so it’s not quite the same as starting from scratch. What’s more, the joint venture seems to be taking an interesting approach on what mobility means, judging by a statement from planned President and COO Izumi Kawanishi.

“By combining the many strengths of Sony and Honda, we intend to accelerate development and lead the evolution of mobility by realizing mobility as an emotional space rooted in safety and security, and the related services.”

Honestly, this feels like the right approach. Forget robotaxis and owning nothing, cars should be sanctuaries of sorts, bubbles of personal space in a crowded world. As for what security actually means, it’ll be interesting to see Sony Honda Mobility’s interpretation of that word. A focus on cybersecurity would be huge considering how much data new cars collect, and Sony’s tech background means that such an interpretation isn’t out of the question. For now, I’m looking forward to 2025 as Sony Honda Mobility seems like one of the most promising new EV companies in a while.

Citroën Goes To The Beach

Is it just me, or are not enough companies making electric beach buggies? The concept sounds awesome, high-torque fun in the sand without spewing tailpipe emissions and noise. Thankfully, Citroën seems to be stepping up to the plate with the My Ami Buggy. I mean come on, how can you not love a dune buggy basically called the friend?

Oh, and while Citroën refers to this fun little toy as the My Ami Buggy numerous times in the press release, the special serialized plate on the dashboards adds onto that, calling this thing the My Ami Buggy ULTRA SPECIAL LIMITED EDITION. Don’t you just love to see it? Honestly, ultra special feels about right, seeing as Citroën is only planning to build 50 of the things. So what exactly do these 50 beach specials get over a standard Ami? Well, the khaki exterior finish is a great place to start, contrasted nicely by a gold set of wheels.

The standard Ami’s doors get ditched for a set of tube doors, while the roof is now a roll-back canvas affair, a bit like on a 2CV. Add in some wonderfully adorkable touches like lime green dashboard inserts and a mildly comedic rear spoiler, and you get one seriously cute vehicle. Well, when I say you get one seriously cute vehicle, I mean that if you live in France and manage to secure an online reservation on July 21, you can get your hands on one of these cute little guys. Pricing isn’t hideously expensive either, Citroën’s announced an MSRP of €9,790, or roughly $10,240. Yeah, I’d be getting in line too if I lived in France.

While the COVID-19 pandemic created a seriously weird car market, it also created some really unique conditions in the car loan market. According to credit reporting company Experian, car loan delinquencies were quite low through the third quarter of 2021, at 1.66 percent for 30-day delinquencies and 0.55 percent for 60-day delinquencies. That’s much, much lower than historical norms as reported by the U.S. Federal Reserve, although it seems like this era of low loan delinquency rates may be coming to a close.

Automotive News reports that Ford CFO John Lawler made some comments about rising loan delinquencies at the recent Deutsche Bank Global Auto Industry Conference. This rise isn’t a huge cause for concern, but rather part of a slow return to what are described as more normal delinquency rates. As Lawler said, “It seems like we’re reverting back more towards the mean.” Honestly, I’m not terribly surprised to hear that auto loan delinquencies are going back up. Inflation is squeezing the absolute bejeezus out of the average consumer, and massively-inflated car values hurt anyone entering the market. Hopefully cooling measures calm inflation’s gale-force headwind into more of a brisk breeze. Until then, maybe just keep an eye on the auto loan market and try to keep your current fleet going as long as possible.

I feel like we all kind of knew that an electric Ferrari was coming at some point. After all, electric vehicles are a sound way for a car company to reduce its new vehicle fleet emissions and it’s hard to imagine the screaming V12 in the 812 Superfast as a particularly green powerplant. However, I’m not sure if anyone was expecting a Ferrari EV in the next three years or so.

According to a Reuters report, Ferrari Chief Executive Benedetto Vigna told investors on Thursday that Ferrari’s first all-electric vehicle is coming in 2025. A bit of a rapid shift considering the V12-powered Purosangue SUV is set to debut this September, but hey. Honestly, it makes sense if you take Ferrari’s projections into account. The brand believes that pure EVs will make up 40 percent of Ferrari sales in 2030, while hybrids will make up another 40 percent of sales. Helping fuel this charge is Ferrari’s plan to launch 15 new models between 2023 and 2026, rather grand ambitions for a boutique exotic car brand. More importantly, Ferrari sees a way to keep its soul while going electric. Chairman John Elkann seems really positive about electrification’s effect on Ferrari’s DNA, saying “The opportunity set of electrification and electronics will allow us to make even more unique cars.” Needless to say, this will be an interesting transformation to watch.

Whelp, time to drop the lid on today’s edition of The Morning Dump. Happy Thursday everyone, Friday’s little brother is finally here. To celebrate, how about playing a little game? Let’s say you’re given unlimited money to build an eight-car collection. The only catch is that each car has to be from a different decade, starting in the 1950s and finishing with the 2020s. What eight cars are you choosing?