Facebook-f Twitter Instagram Rss
Menu
Menu
Home » The 2022 Chevy Blazer EV May Be The First Production Car To Be Available As FWD, RWD, And AWD

The 2022 Chevy Blazer EV May Be The First Production Car To Be Available As FWD, RWD, And AWD 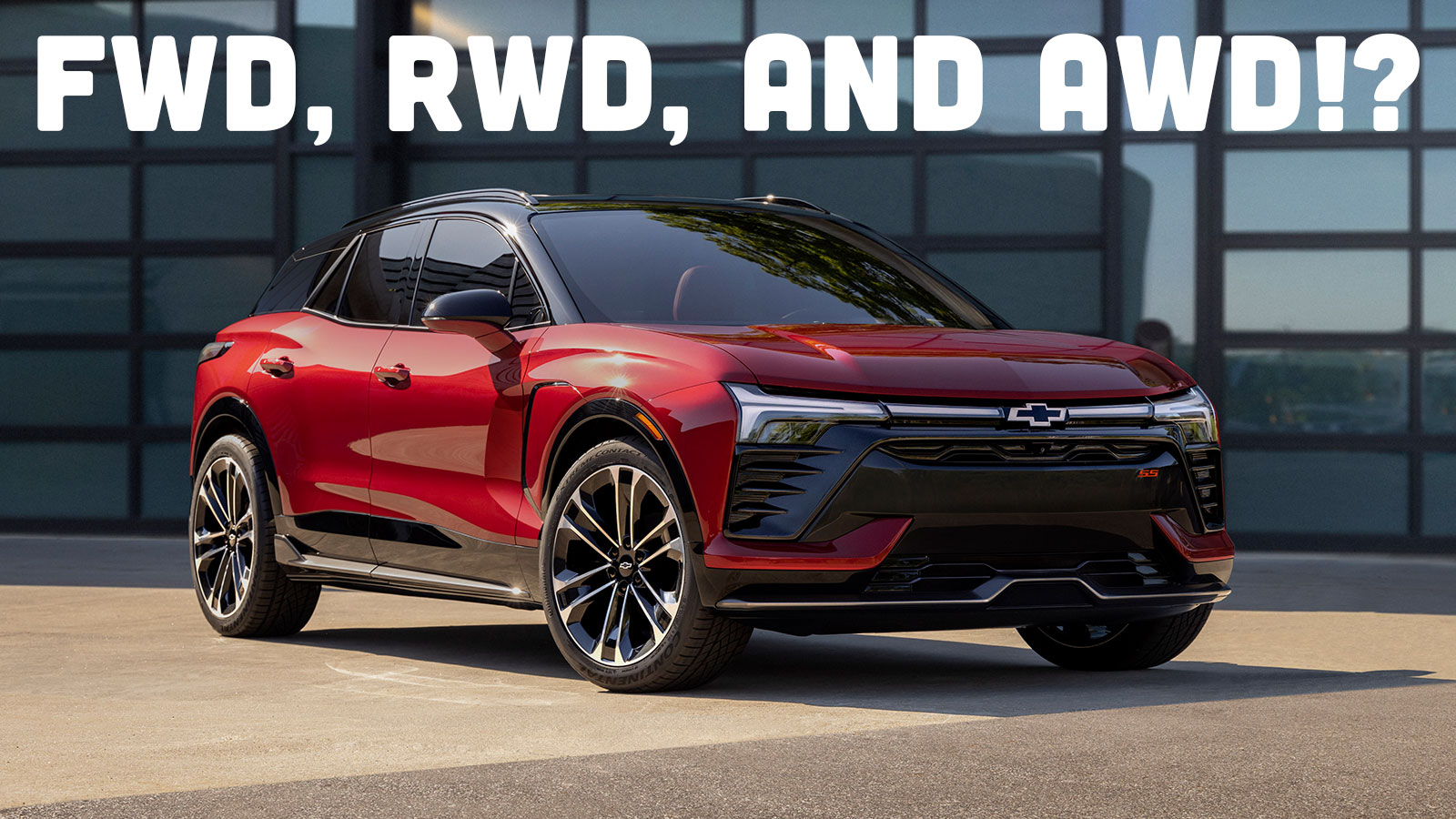 Chevrolet has just spilled all the beans on their new electric crossover, the 2024 Blazer EV. It fits in pretty seamlessly with the current crop of modern EV crossovers in that it’s pretty fast, pretty expensive, and while I can’t go so far as to say pretty-looking, it’s not bad. The specs seem pretty on par with most of its competitors, but what I think is interesting about the Blazer EV is that it may be the first real mass-market car that you can buy new and specify a FWD, RWD, or AWD configuration, which is pretty cool. We’ll get into that in a bit, but first let’s get the serious stuff out of the way.

GM has this little promo video, which somehow maintains GM’s long tradition of making decent, normal people annoy the crap out of you when placed into one of their ads:

The Blazer EV starts at $44,995 for the base 1LT model with 247 miles of range and goes up to nearly $66,000 for the SS model with 557 horsepower and a 0-60 time of under four seconds. If maximum range is your goal, the RS trim level is for you, with a GM-estimated (so you know, take that with some NaCl because the EPA may get a different result) 320 miles of range.

This RS trim (right at $52,000) is also the one that is available in all three driven-wheel options: 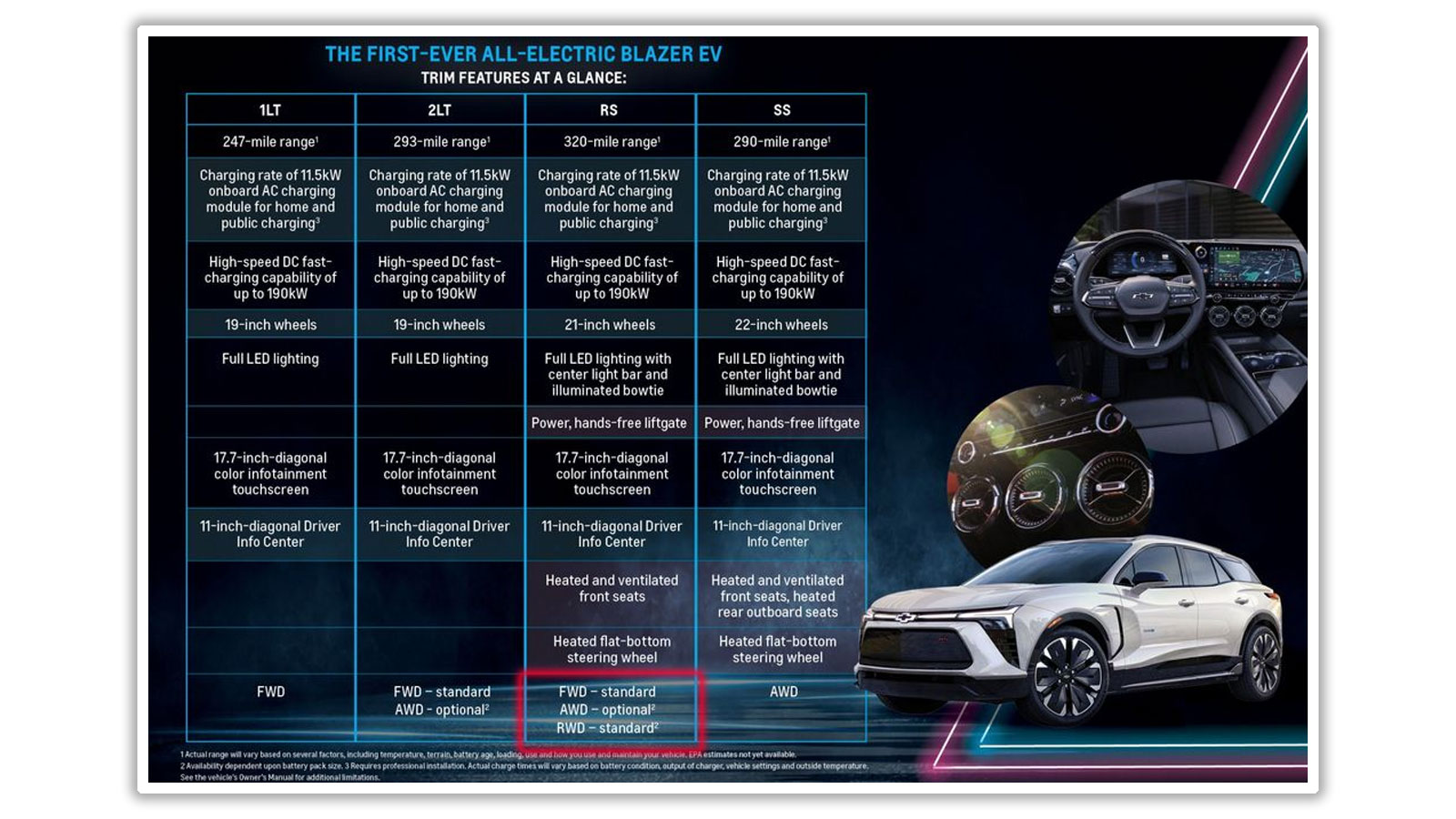 See that in the box there? It lists FWD as standard, AWD as optional, and RWD as somehow standard, too. The footnote just says it’s dependent on “battery pack size,” but it’s not clear what that means, exactly, since this trim level seems to only have one estimated range. I guess if the proper battery pack is available you can just choose between FWD and RWD when you order one?

The Blazer EV is built on GM’s Ultium platform, which could have motors at either end or both from the get-go, so this isn’t really all that surprising, technically. What is surprising is letting customers pick between driving the front or the rear wheels, when it’s almost always a choice between driving just the front or rear along with an all-wheel-drive option.

The only car I can think of that has even allowed for FWD, RWD, or AWD doesn’t really count, because it always had two engines: the Citroën 2cv Sahara. That’s more of an AWD car that lets you disable either axle at will. The Rover 75 could be had as a FWD car or a V8 RWD version, but no AWD, and the Renault 5/Renault 5 Turbo and Renault Clio/Clio V6 both switched from FWD to RWD, but I can’t think of any that have managed all three options on one model of car.

Our own Thomas Hundal suggested the Chevy S-10, because you could get a RWD one, a 4×4 one, and the rare EV version was FWD, but I’m not really sure that counts.

Okay, back to real-person stuff. The Blazer EV supports the usual glacial 120V home charging and the less-glacial 240V charging, but also offers DC public fast-charging up to 190 kW. Chevy tells us you can add almost 80 miles of range in 10 minutes via this level of charging, which is great, but does lag behind some competitors, like the Hyundai Ioniq 5 that can charge at 350 kW DC levels, which permits 60 miles in five minutes, or going from 10% to 80% total charge in 18 minutes.

The Blazer EV can be equipped with Chevy’s Level 2 driver-assist system, SuperCruise, and that is standard on the SS trim.

Color selection is pretty minimal, but there are at least two basic colors, red and blue, along with the expected non-palette of grays, whites, and blacks. 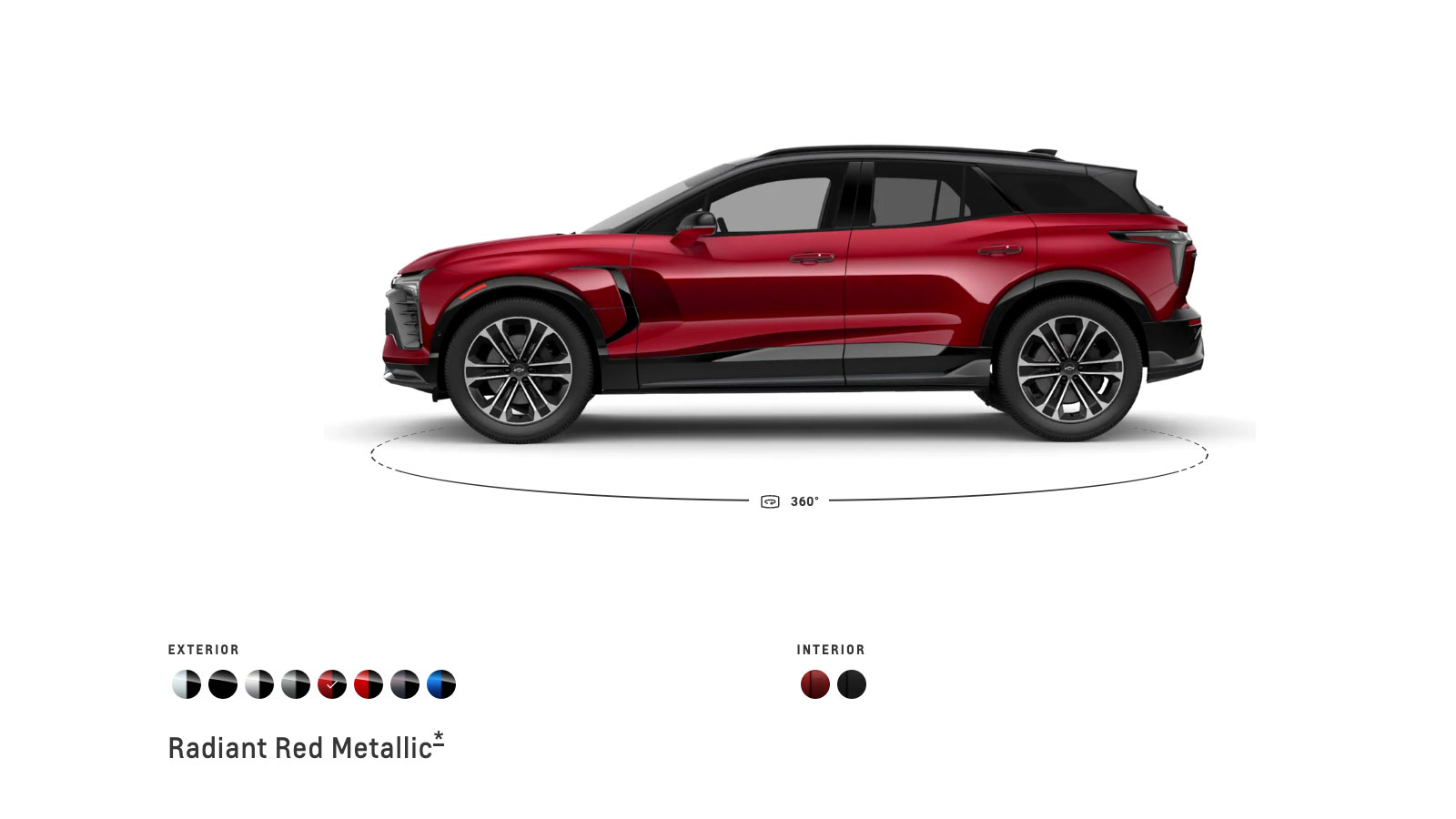 The styling has already been revealed a while back, so it’s not a revelation, but I’m not really sure it would be even if this is the first time you’ve seen it. It’s not bad, but I don’t think anyone is in danger of getting whiplash craning your neck to look at one of these as they pass by. 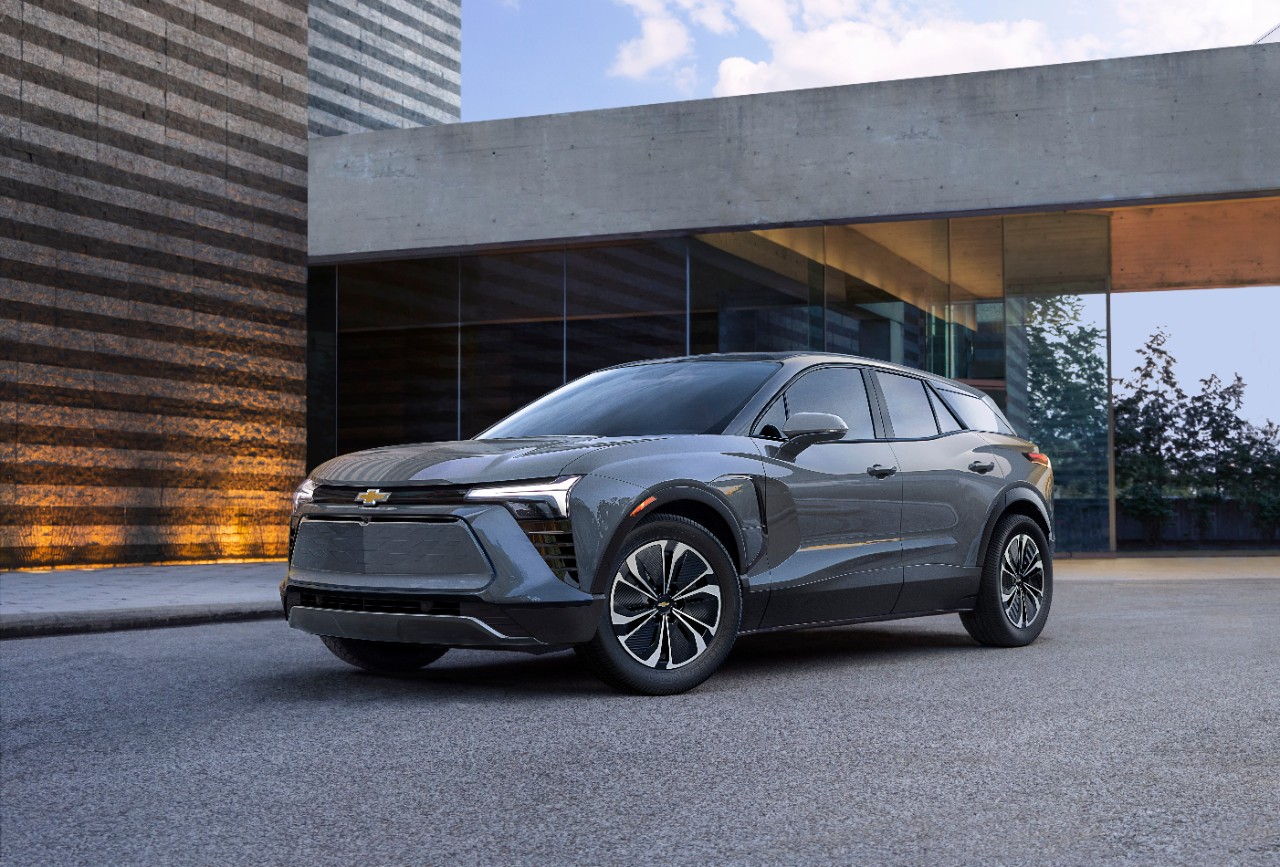 That said, I do like that novel little recessed area behind the front wheel-arch looks, and I think the beltline that kicks up at the rear is appealing. The lighting design up front is reminiscent of Volvo’s Thor’s Hammer lights, and the rear uses an inverted L-shaped motif that, while it may not be exactly like what you’ve seen on other cars, is pretty much like an amalgam of what you’ve seen on other cars. Again, it looks decent enough, and even good from some angles, but it’s hardly a standout. 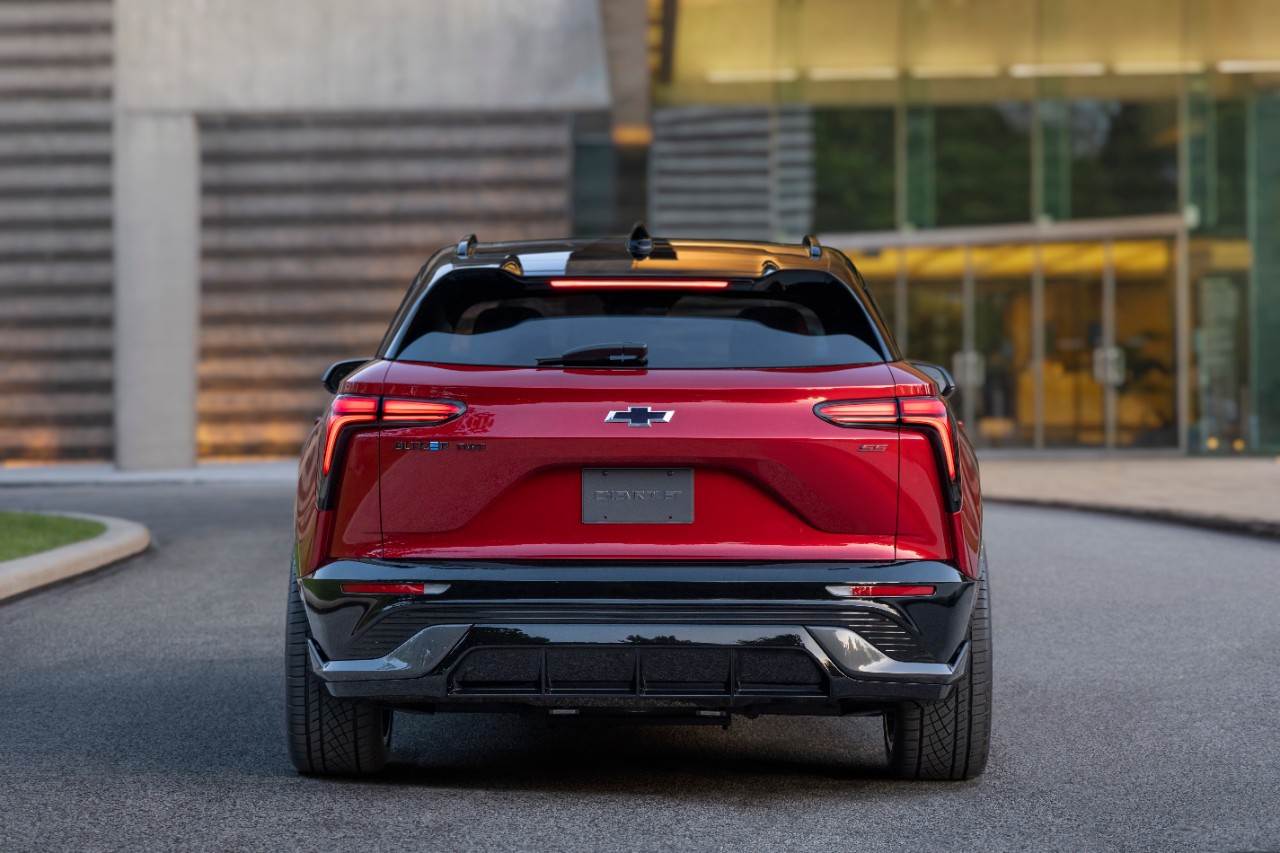 Also worth noting is that GM is offering a Police version of the Blazer EV, so now is the time to commit these headlights and front end to memory to spot in your rear-view mirror: 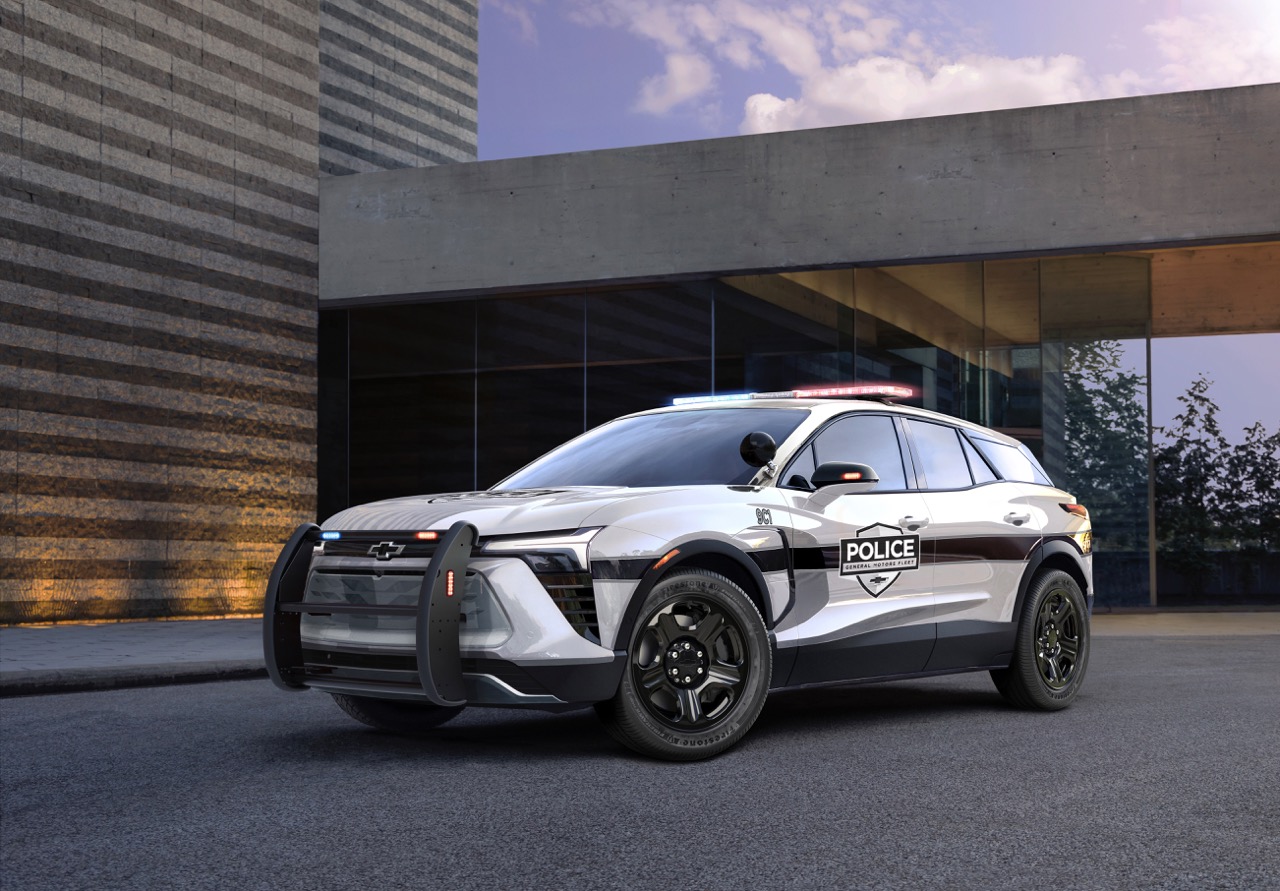 The interior seems to at least have some vivid color seat options, at least in SS trim, which is welcome: 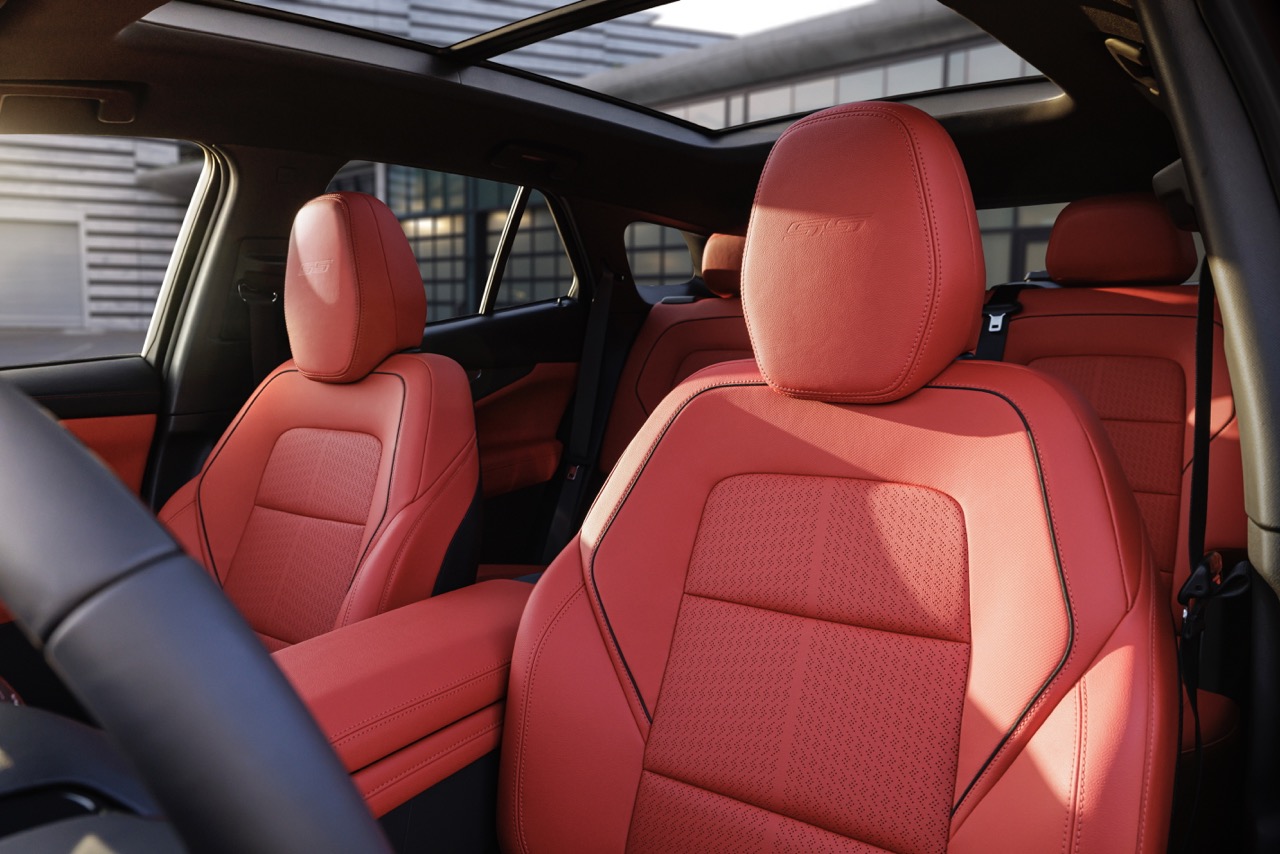 The dash and instrument cluster are, as expected, full of screens, and the usual complement of tech goodies, though I found no mention of Apple CarPlay or Android Auto in GM’s press release. 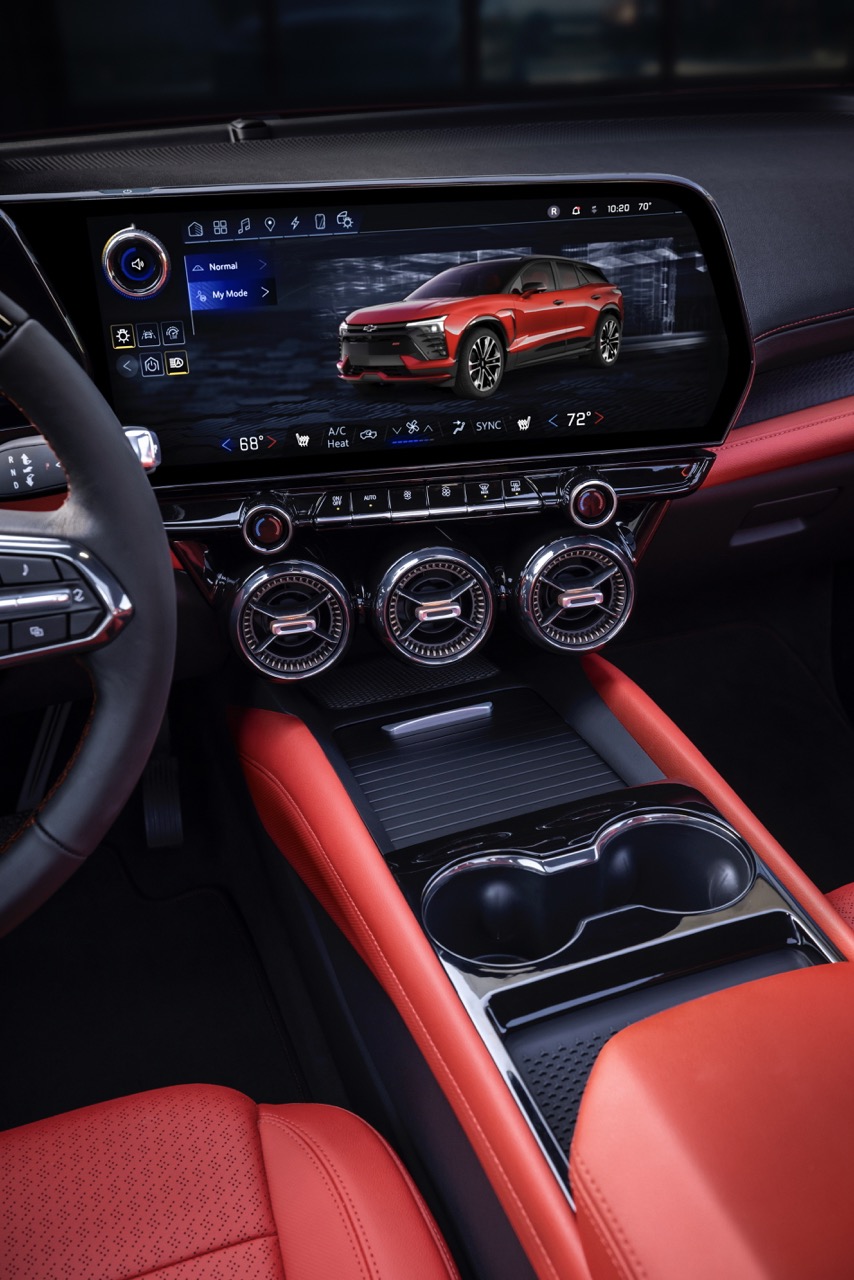 I did find this rundown of the tech features, which I’ll just quote for you here:

A major enabler of the Blazer EV’s technologies is Ultifi11, GM’s new end-to-end vehicle software platform. It separates the vehicle’s software from the hardware to enable the frequent and seamless delivery of software-defined features, apps and services to customers over the air. Ultifi will allow customers to continue to upgrade and personalize their vehicle like never before, as improvements and new features become available over time.

I think “presence-based liftgate” sounds kind of weird, like maybe it won’t open if you’re on your phone and not focusing on what you’re actually doing back there.

Cargo room looks decent, too, though I don’t think there’s any provision for a front trunk storage, which I personally think all EVs should at least try to have. 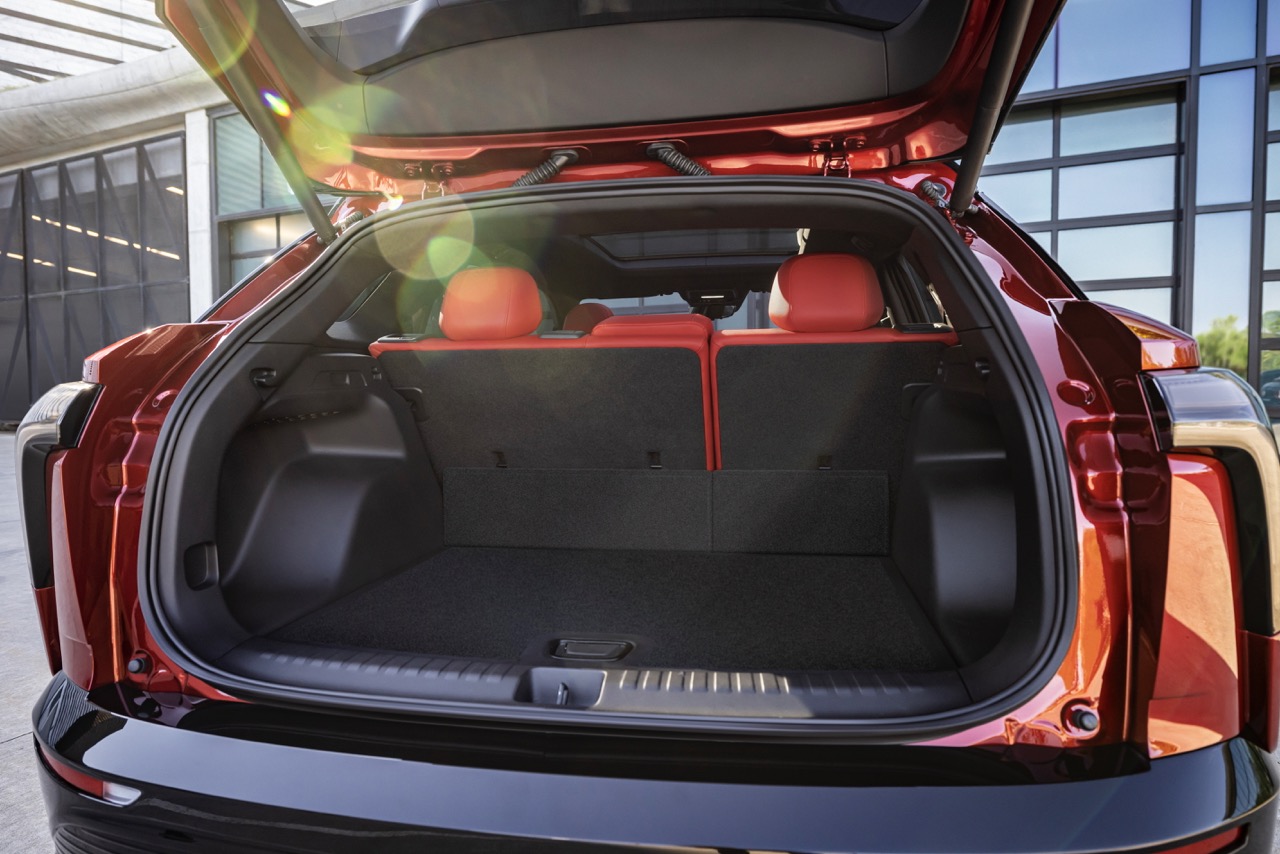 Overall, the Blazer EV seems like a competitive enough electric crossover, and I’m sure it’ll be a Target parking lot staple before you know it. Is it any better than the Mach-E or Tesla Model Y or Volkswagen ID4 or any number of other modern EV crossovers?

At this point, I’m not sure. We’ll try to figure that out as soon as we can get in one.

I'm a co-founder of the Autopian, the site you're on RIGHT NOW! I'm here to talk to you about taillights until you cry and beg me to stop, which I absolutely will not. Sorry. Hug? Also, David's friend.
Read All My Posts »
PrevPreviousLada Is Building Dumbed-Down “Classic ’22” Nivas Now, Thanks To Russia’s Stupid War
NextThe Hyundai Stargazer Is A Small Van With A Weird Name And Promises Superb PracticalityNext