The outgoing Honda Accord was a great car. Nicely-styled and packing a burly optional two-liter turbocharged engine, it could be a wonderfully well-built sleeper or a sensible family sedan depending on trim. Now there’s a new Accord, and Honda seems to have made it even better, provided you’re not the stoplight-to-stoplight sort.

On the outside, the new Honda Accord is very minimalist and refined, definitely punching above its price grade. Honda’s done away with the beluga-style fivehead introduced on the current Civic, and the Accord’s all the better-looking for it. Around back, a heckblende-style tail lamp treatment ties the rear together nicely, while the rear emblem is a sensible size for once. Job well done, Honda.

As for powertrains, the big two-liter turbocharged motor shared with the Acura RDX is gone for 2023. For Honda Accord buyers, now it’s just a choice between a 1.5-liter turbocharged four-cylinder on LX and EX trims, and a two-liter naturally-aspirated four-cylinder hybrid powertrain on Sport, EX-L, Sport-L, and Touring trims. That hybrid powertrain cranks out a stout 247 lb.-ft. of torque, which really seems like plenty in a midsize sedan, but the 1.5-liter turbo motor doesn’t sound like a bad choice either. 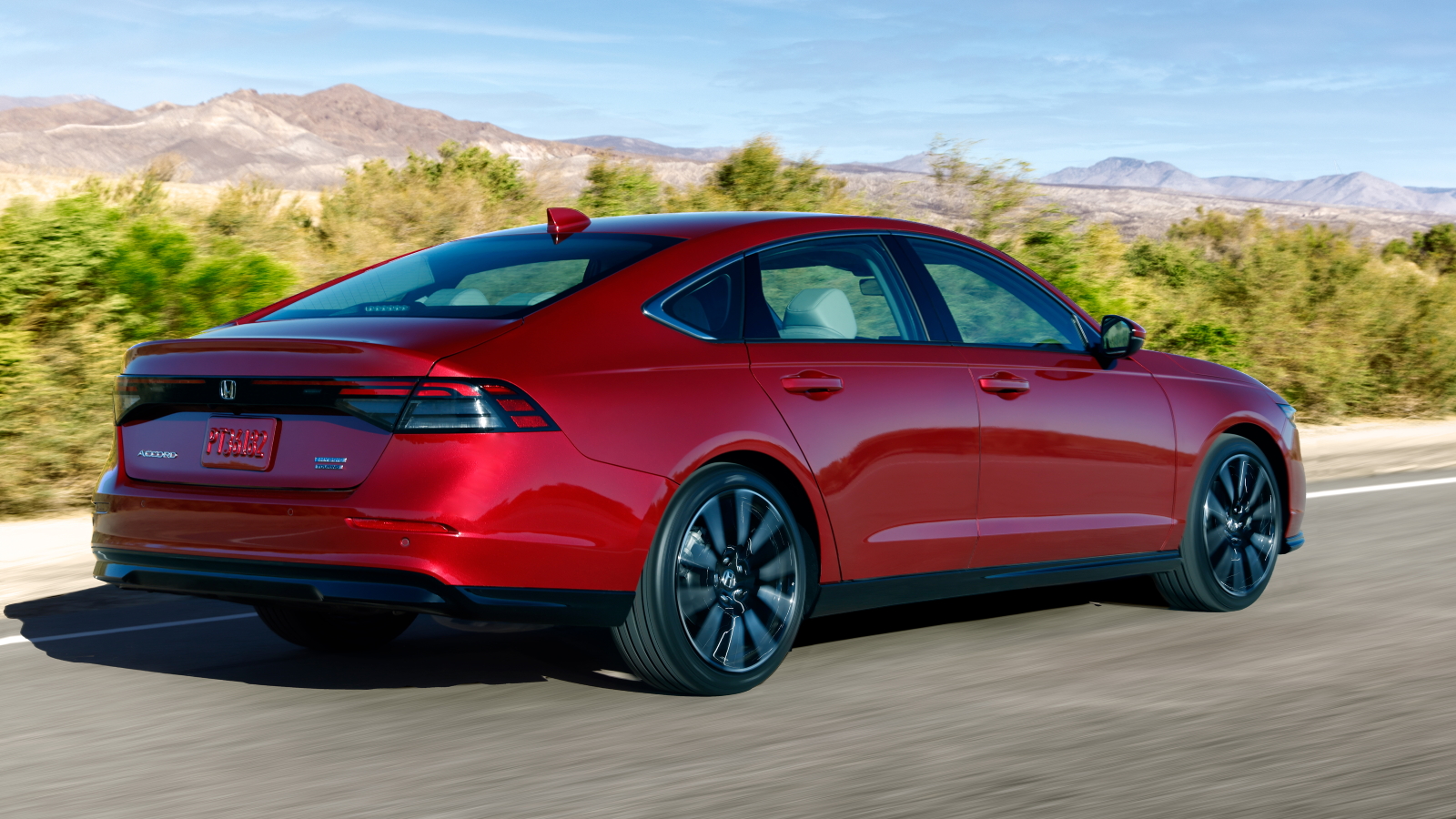 Let’s take a closer look at the hybrid powertrain that should make up the bulk of Accord sales, because it’s a bit weird compared to what Toyota offers in the Camry Hybrid. On paper, it sounds almost undriveable in the real world. Sure, 204 horsepower doesn’t sound bad at all, but peak torque of 247 lb.-ft. doesn’t hit until 5,000 rpm and keeps on going to 8,000 rpm. Moreover, the final drive ratio is 3.895:1, much longer than you’d typically expect from a Honda. This is because the Accord Hybrid has no gearbox, a bit like the Koenigsegg Regera. Here’s how it works.

Instead of a gearbox, the Accord Hybrid has two electric motor-generators. Upon setting off from a standstill, the Accord Hybrid operates on electric power from its relatively small battery pack. Once up to suburban road speeds or once the battery’s depleted, the engine kicks on, but not to provide power to the wheels. Instead, the engine acts as a generator, a bit like on a BMW i3. Now, here’s where the really fun bit happens. Mash your foot through the carpet, and the Accord should kick into a power mode of sorts, where a lockup clutch sends the engine’s output to the front tires with assistance from one motor-generator. Since the only thing sitting between the engine and the final drive ratio is the lockup clutch, it basically has a single-speed gearbox. As for the other motor-generator, it works as a generator to send power into the Accord’s battery pack. While this isn’t exactly a new system, it’s still a rather fascinating approach to hybrid power that results in some very screwy numbers on a spec sheet.

If you’re a fan of sticking with the lower LX and EX trim levels, the 190-horsepower 1.5-liter engine should be perfectly fine. While some lament the character of this engine in the Civic Si, it was perfectly fine in the old Accord. Once you take away sporting pretense and just ride the torque curve in everyday driving, 192 lb.-ft. of torque between 1,700 and 5,000 rpm is more than adequate. 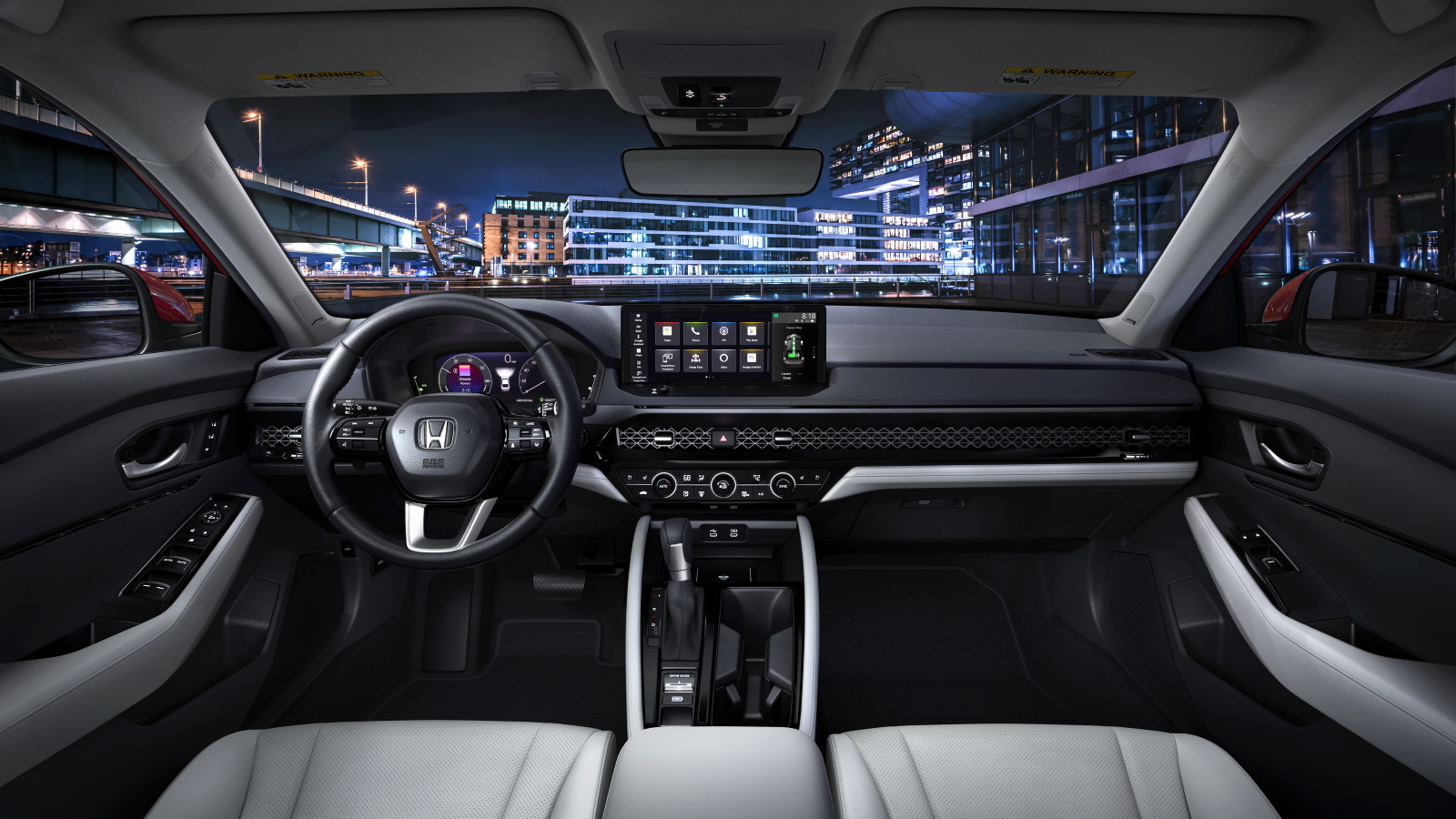 On the inside, higher-trim models get a big 12.3-inch screen with wireless Apple CarPlay and Android Auto, along with gorgeous light leather that plays well with Honda’s current “Simplicity and something” interior design language. Sure, the shifter’s a bit crooked, but everything else looks properly put-together. Then again, Honda’s reasoning for the crooked shifter is to fit big cups in cupholders to the right of the gear knob, so even that’s fairly sensible. Mind you, I do have a gripe when it comes to equipment. While wireless phone mirroring is standard on Sport and higher trims, wireless charging is locked to the top-spec Touring model. Sure, portable wireless charging pads aren’t expensive these days, but that’s all the more reason to offer a wireless charger on more of the lineup.

Speaking of the lineup, let’s go on a little trim walk. The base LX comes fairly well-equipped with a 10.2-inch digital cluster, ten airbags, volume and tuning knobs, and 17-inch alloy wheels. Step up to the EX, and the driver’s seat becomes powered, a sunroof lets in some crisp autumnal air, the seats are heated, and the climate control is dual-zone. If it were my money on the line, the EX is the trim I’d probably buy as it has all the toys I want, comfy 50-series sidewalls, and shouldn’t be as expensive as higher-spec models.

Next up is the Sport, the first hybrid in the Accord lineup. In addition to the hybrid powertrain and the big 12.3-inch infotainment screen, it gets 19-inch alloy wheels, special cloth upholstery, alloy pedals, leather-wrapped steering wheel and gear knob, black side mirrors, and a black spoiler. As for the EX-L, it’s basically an EX with the big screen, leather, a power passenger seat, rear USB-C ports, and a hybrid powertrain, while the Sport-L is just a Sport with leather, a power passenger seat, and a unique diffuser-style element. 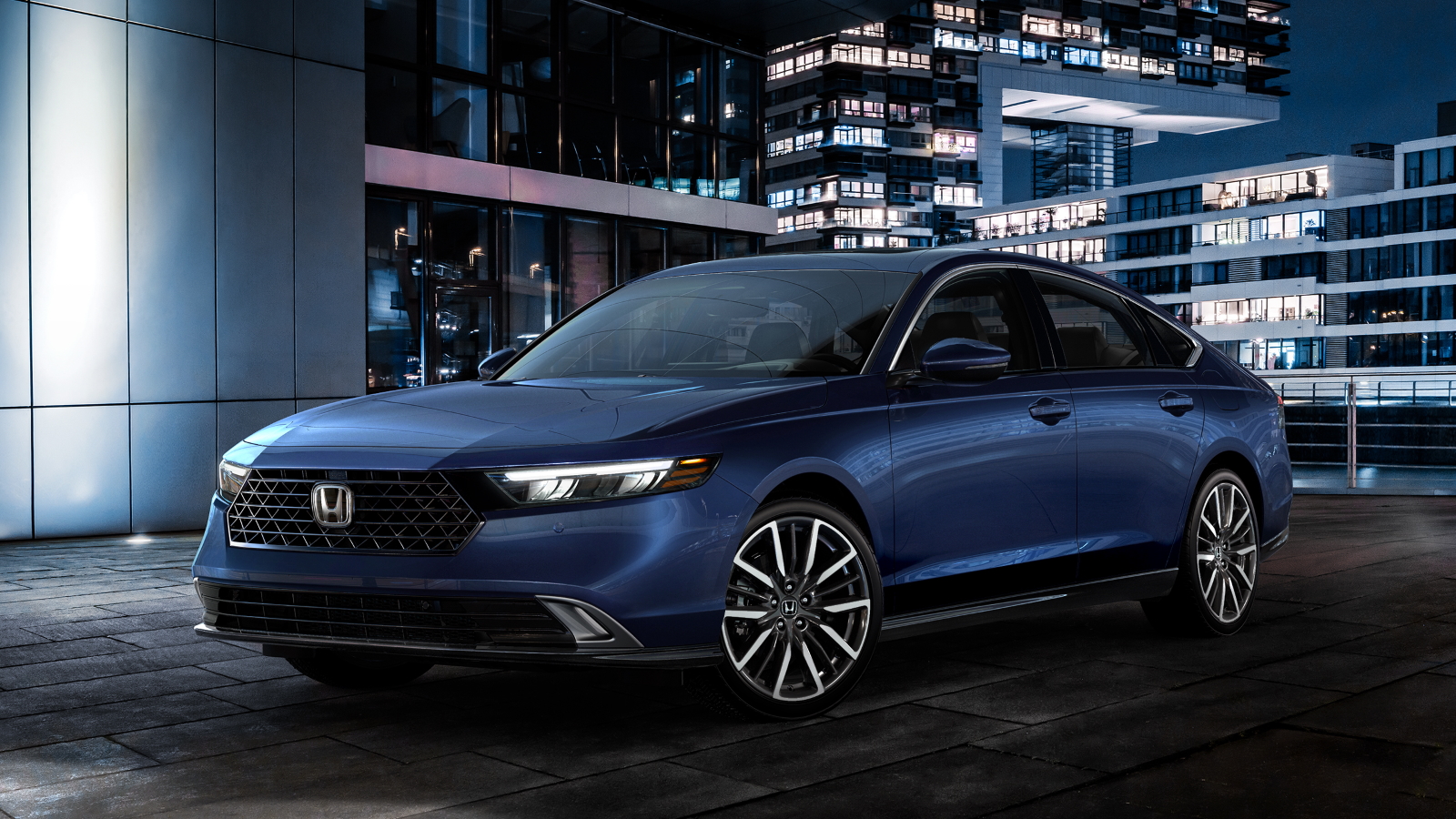 Finally, we get to the father of all Accords, the top-spec Touring model. On the tech front, it gets wireless charging, a heads-up display, Google built-in, and a 12-speaker Bose stereo that should be fine for the segment. Add in cooled front seats, heated rear seats, and unique 19-inch alloy wheels, and that’s as loaded of an Accord as you’re going to get.

While pricing hasn’t yet been released for the new 2023 Honda Accord, expect word on it really soon given an on-sale date of early 2023. While not everyone will love the disappearance of the hot two-liter turbocharged engine, it’s nice to see a fresh midsize sedan on the market. Will the Accord hold onto the crown as America’s best-selling passenger car? With tastes of older buyers shifting towards crossovers and tastes of younger buyers shifting towards smaller cars, it’s hard to say. Still, it looks like a very promising entry into an underrated segment.

All photos courtesy of Honda