We all make mistakes. I wish I could say I’ve only accidentally eaten dog food one time or had never mistakenly knocked myself out by taking the wrong pills or moisturized with what turned out to be depilatory, but the truth is I’ve made many, many mistakes. Sometimes, though, mistakes can have exciting side effects, like today, when our pals at Motor Trend apparently accidentally published their story about the new 2024 Hyundai Ioniq 6 a day before its planned reveal tomorrow. The publication took it down almost immediately, but, you know, this is the internet. Nothing is ever truly gone from this place. The upside of all of this is that Hyundai seems to have another design triumph on its hands, so why not give the world an extra day to enjoy it? Let’s take a look.

One odd thing: the Motor Trend story refers to the car as a 2024 model, but notes it’ll be on sale early 2023. Other outlets have been talking about it as a 2023 car. This feels like odd think for Motor Trend to get wrong, which makes me think that for whatever reason, Hyundai wants to call it a 2024. I guess we’ll know for sure tomorrow. 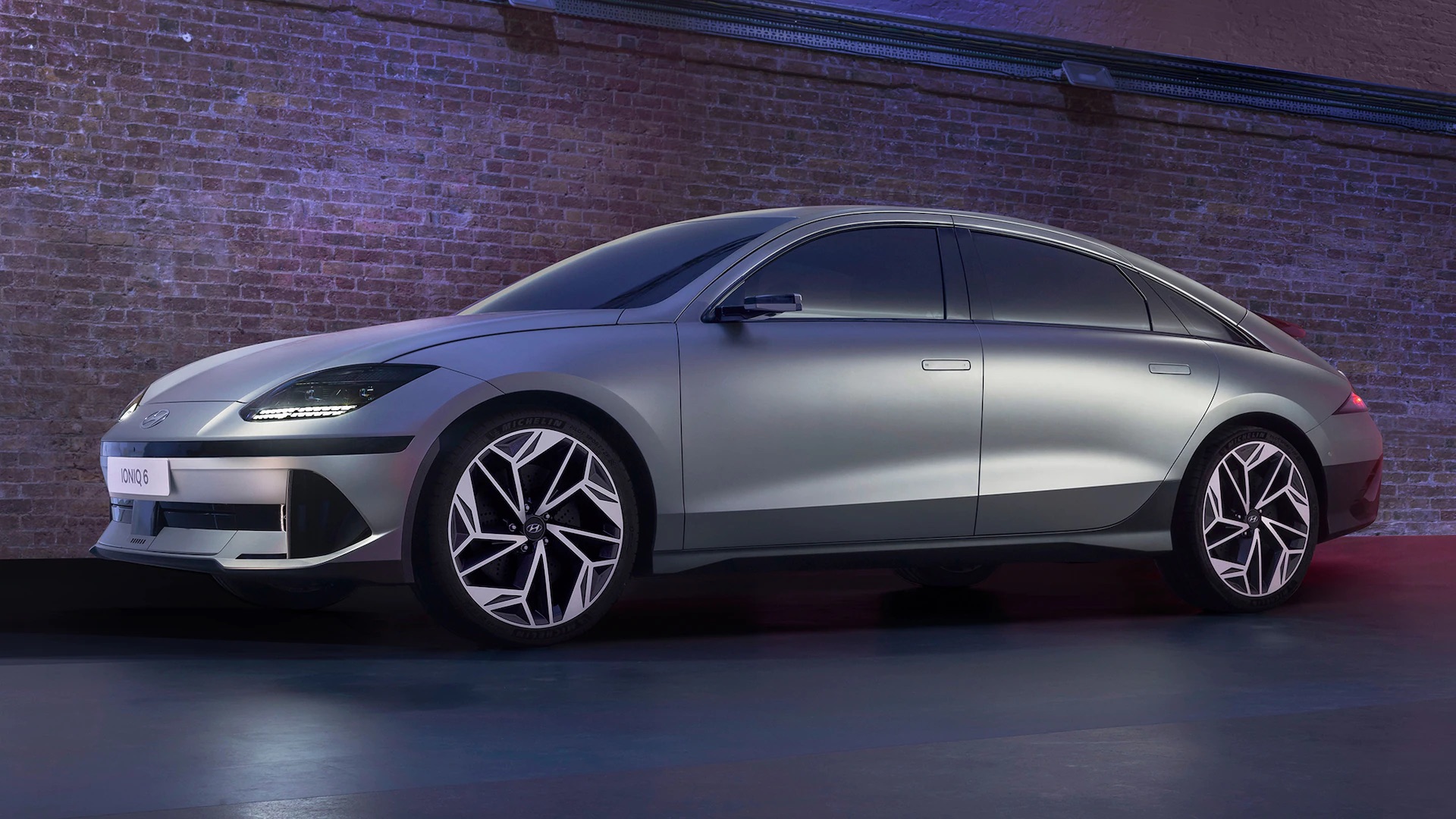 First off, the thing just looks fantastic. There’s an awful lot of Porsche 911 design influence going on here, which is a pretty good place to start when considering a grille-less front end. The rear also has a lot of 911-ish style, too: 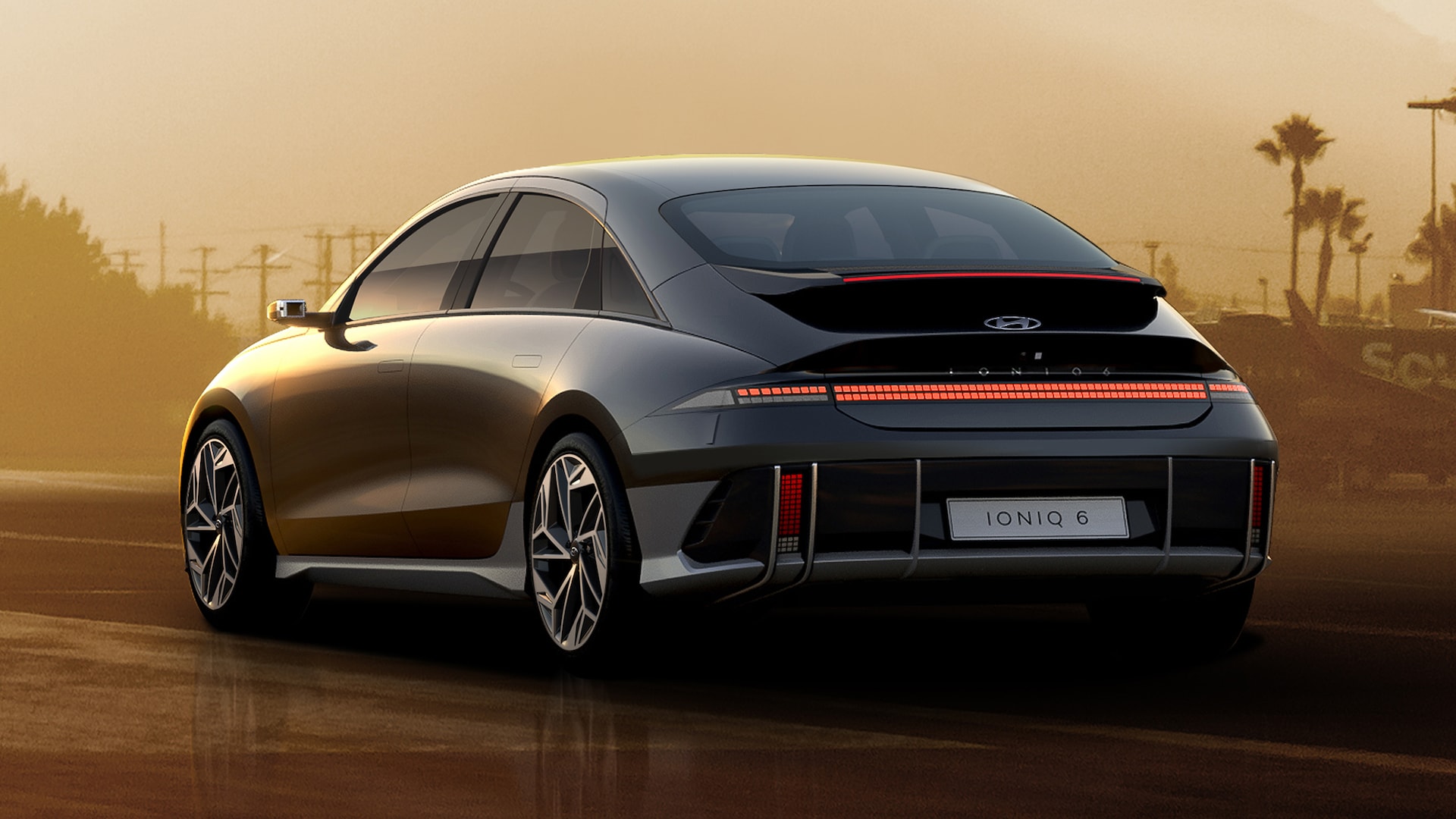 The full-width taillight that tapers to points as it wraps around the corners of the car, the slope of the rear, the spoiler, the arc of the shoulder line — these all feel remarkably Porsche-like, but it never falls into feeling like a Porsche knockoff, because there’s plenty of other influences going on, as well as the overall proportional differences. 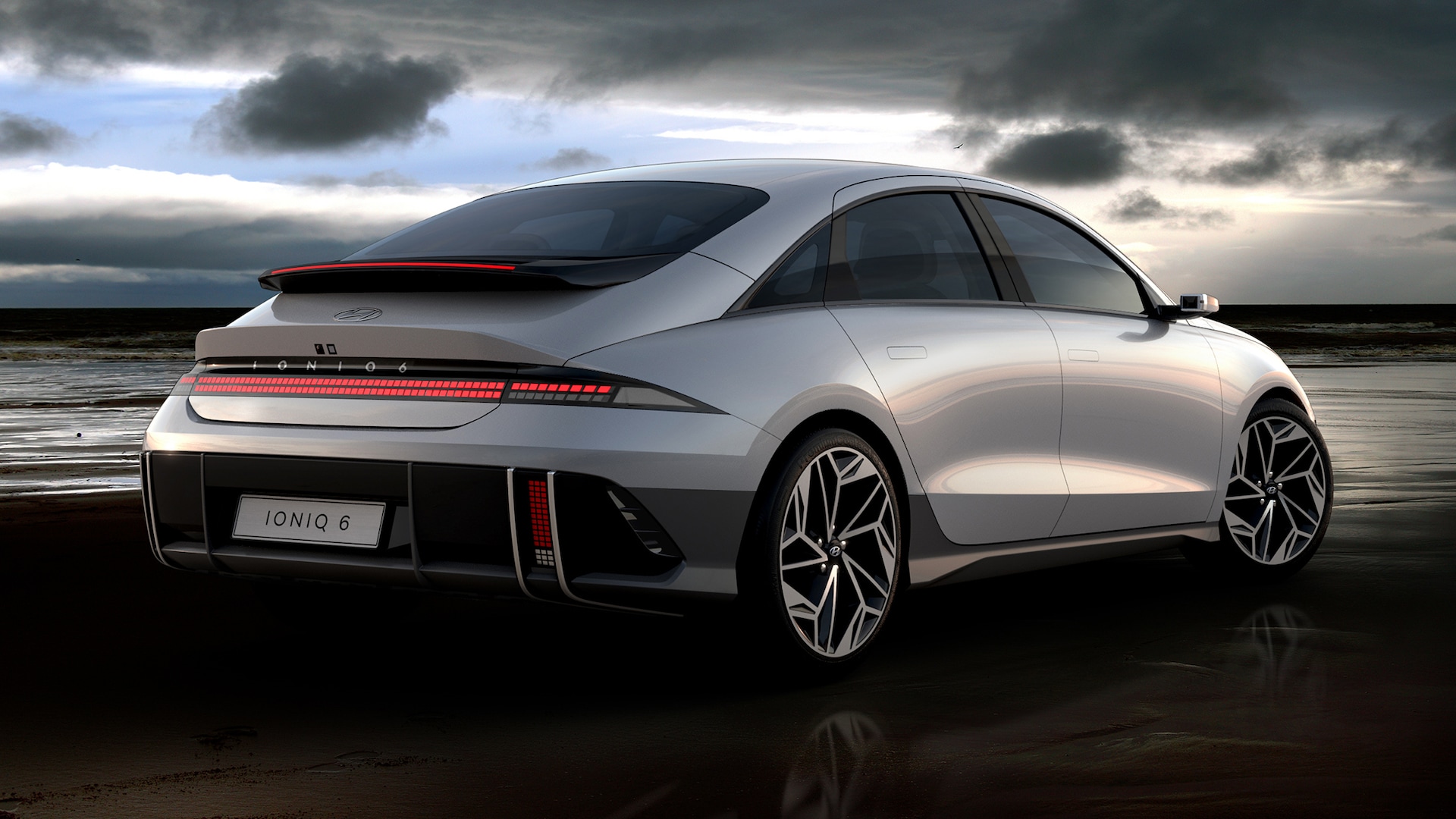 The pixel-like lighting design details we saw on the Hyundai Ioniq 5 are present here, too, and work very well, both in the wide heckblende light and the vertical lower lamps that seem to house the reverse lights as well, sandwiched between some hopefully functional vertical bumper guard-like details on the rear lower valence.

The twin, double-decker spoiler/wings are a little strange on second viewing, though. I wonder if there will be an option for one without the black upper one? 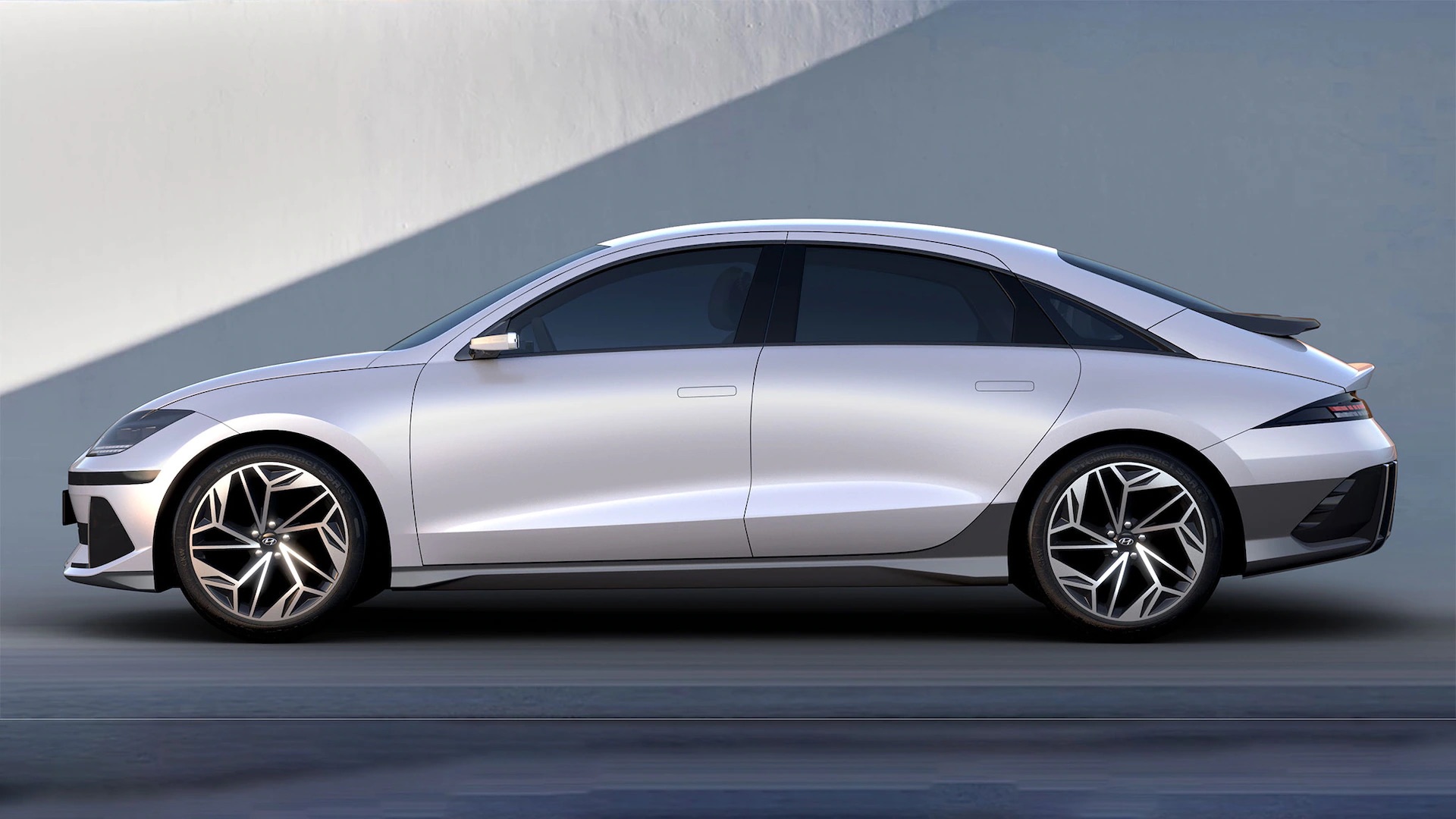 The profile is very crisp and clean, with a nice inset arc making the sides look lean, and some well-considered cutlines of the body panels. Yes, the fastback C-pillar has a cutline for the trunklid, but I actually don’t mind it, and I respect the time taken to have the cutline between the rear fender skin and the rear bumper cover follow the shape of the taillight. That, along with flush door handles and a charge port that is so well hidden I absolutely have no idea where it is combine to make a lovely, unified whole.

The fact it’s not a hatch is a bit disappointing, and I wonder if it’s the result of the same structural issues that kept the Tesla Model 3 from being a hatchback, too. I still feel like they could have figured that out, though. I mean, a 1990 Merkur Scorpio did.

The hoodline feels low, an achievement in our era of pedestrian impact protection, and the graphic of the side windows flows wonderfully to that tapered point at the rear, as all the main lines of the body – roof, beltline, window line – converge at the rear.

It’s sleek! And not just visually; according to the disappeared article, the Ioniq 6’s drag coefficient is only 0.21, same as a Tesla Model 3, and close to the Mercedes-Benz EQS’s Cf of 0.20.

Per the Motor Trend article, the Ioniq 6 — whose wheelbase sits between that of the Kia EV6 and Hyundai Ioniq 5 —will use the 800-volt fast-charging architecture of those two sibling cars, and while motor/battery specs don’t seem to be out yet, it’s safe to assume that they’ll match or beat the Ioniq 5’s specs of a 225 hp/258 lb-ft rear-mounted motor for single-motor applications, with an additional 99 hp/188 lb-ft front mounted motor for AWD setups. Range is over 300 miles on the Ioniq 5, and I’d bet Hyundai will be shooting for that or better on the Ioniq 6. The interior looks pretty swank, with a large LCD instrument cluster and an equal sized (12 inch) center stack screen. Especially notable are the rear view camera screens at the sides of the dashboard, and while this feels like very cool tech and undoubtedly helps the car achieve those impressive aero numbers, I suspect I’d have the same problem with those that I have with other screen-based rear view mirror replacement systems. 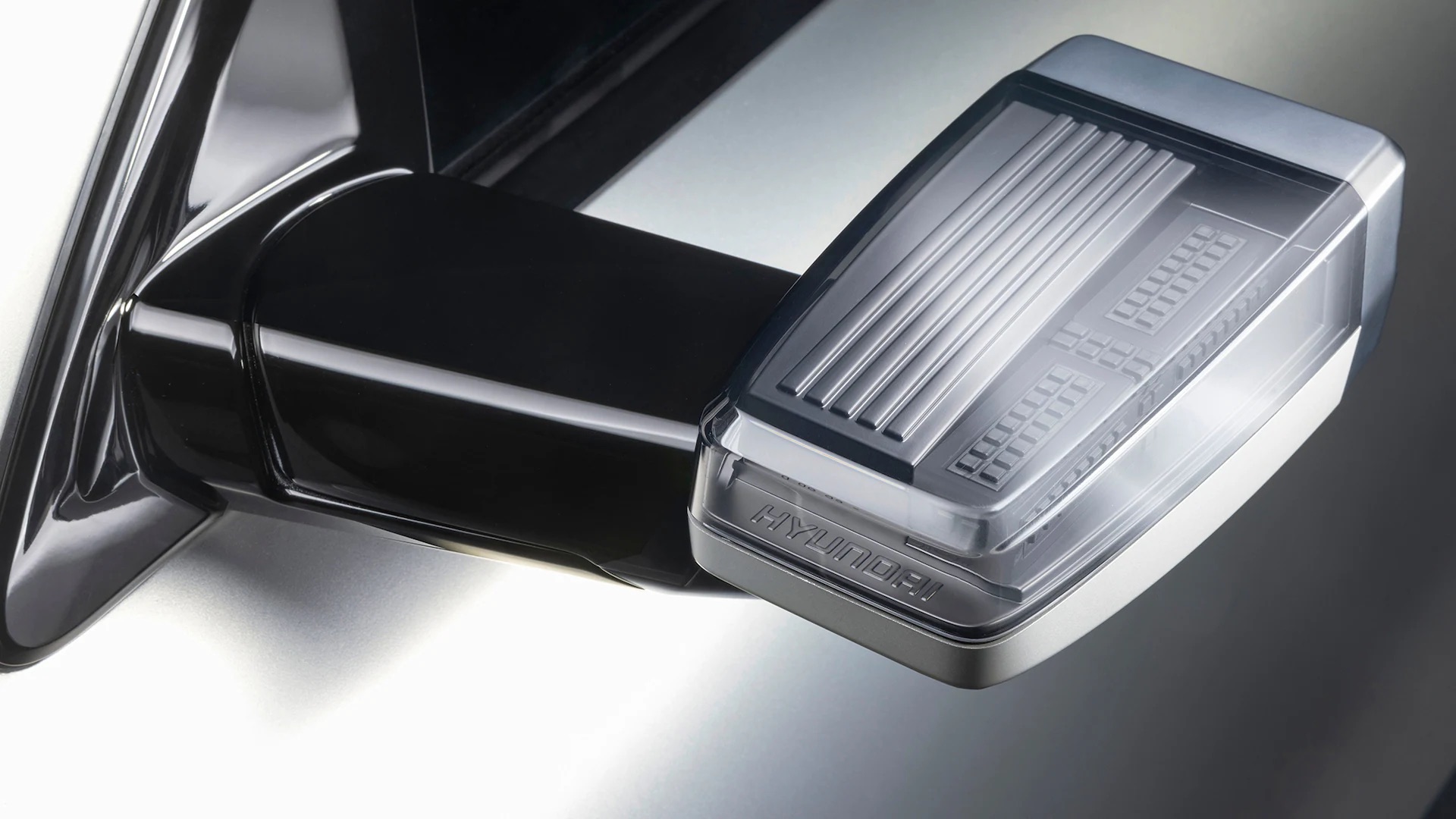 They do look cool from the outside, though. I think those little blocks inside there are LEDs for the indicator repeaters, by the way. 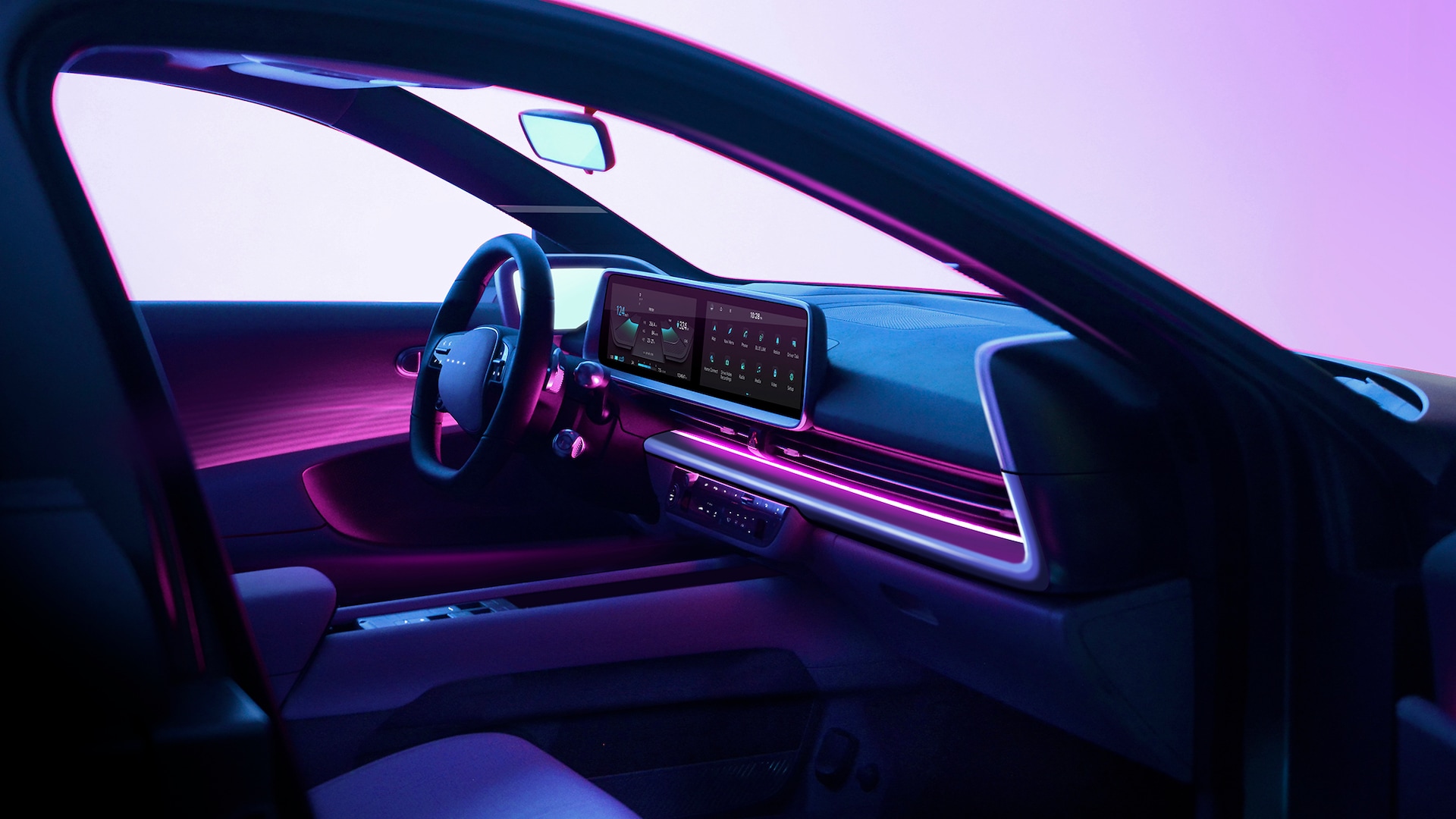 Hyundai seems to be playing a lot with ambient lighting for the interior, and I get that. It’s a fun and relatively inexpensive way to dress up an interior space, especially at night. Those four little blocks on the steering wheel are LEDs that, it seems, glow to indicate charging level or are used for visual feedback when giving voice commands.

So far no pricing information has been released, though the Motor Trend has a pretty good guess. From the now-removed story:

Hyundai sources say the Ioniq 6 will be priced under the smaller Tesla Model 3 when it goes on sale next year, which suggests a starting price of less than $48,000 for the entry-level rear-drive model.

Overall, I think Hyundai is continuing its streak of wonderfully and strikingly-designed cars, and I hope they don’t feel too bad about this leak, because, as I said, there’s no good reason to keep something like this hidden.

I'm a co-founder of the Autopian, the site you're on RIGHT NOW! I'm here to talk to you about taillights until you cry and beg me to stop, which I absolutely will not. Sorry. Hug? Also, David's friend.
Read All My Posts »
PrevPreviousA Miniaturized Mustang And An Upstart Import – 1974 Mustang II vs 1978 Honda Accord
NextTesla Brings Back Its Enhanced Autopilot System To Add To The Driver Assistance ConfusionNext