This Is The 2024 Jeep Recon: The First Truly Off-Road Capable Electric Jeep Ever 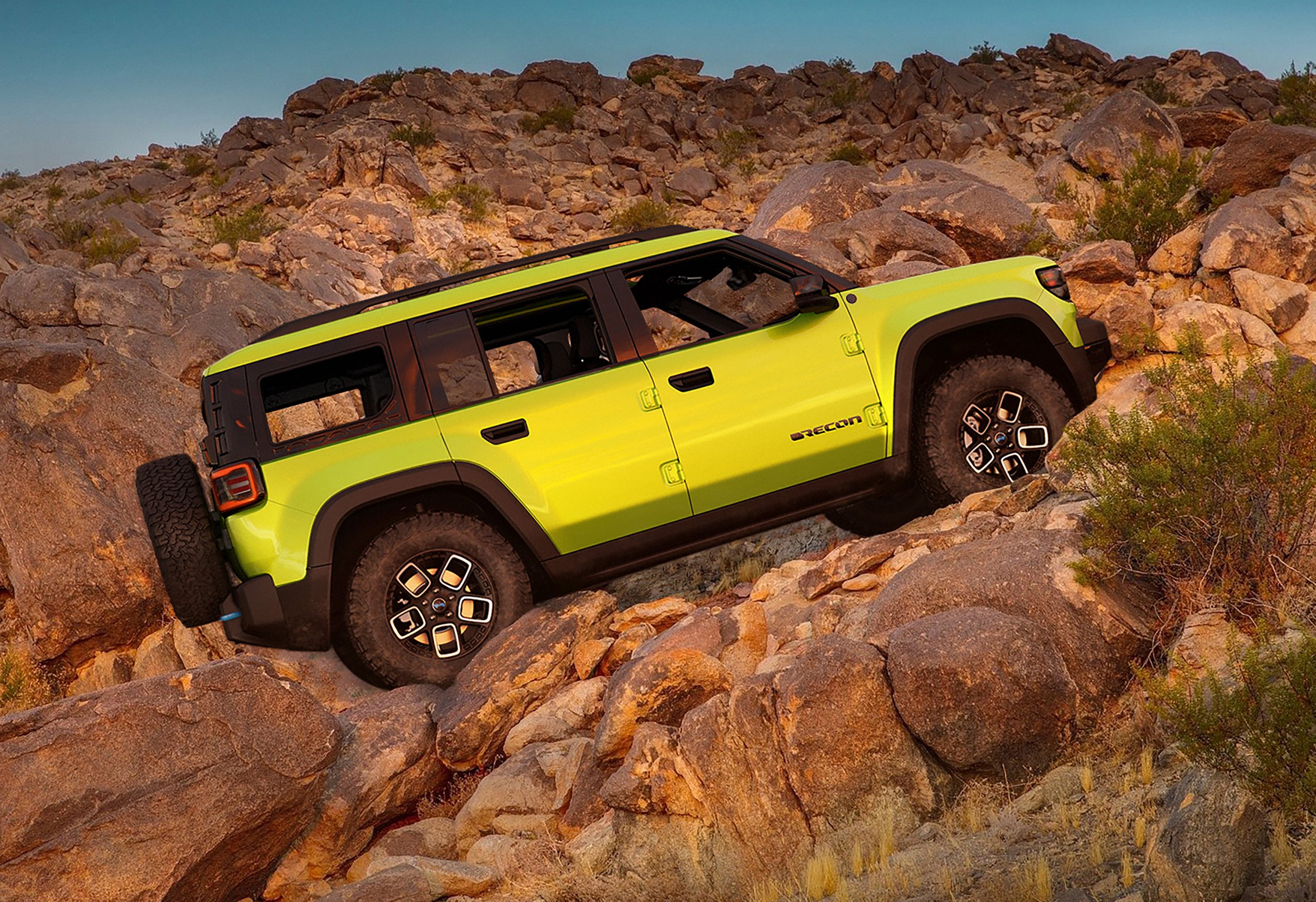 And so it begins. The world is transitioning to electric cars, and Jeep – a brand that has been riding the coattails of solid-axle off-road vehicles since 1941 — is going to have to figure something out, because electric cars with solid axles just don’t make sense right now. Before you worry, no, the 2024 Jeep Recon is not going to take place of the legendary Jeep Wrangler, but it is going to represent Jeep’s very first “true” fully electric off-roader in the brand’s 81 year history. Here’s a first look at the Jeep Recon.

“The Wrangler stays the Wrangler — the icon of the brand…. the best of the best of the best is the Wrangler. Most capable” said Jeep brand CEO Christian Meunier at a press conference yesterday. This came after I asked whether the new Recon would be replacing the Wrangler, and after Stellantis’ head designer Ralph Gilles talked about how that very question meant his team had done its job right. The Recon, he said, was meant to take inspiration from the Wrangler, and you can sort of see that in the design, with the squared-off greenhouse, rear-mounted spare tire, and removable doors: 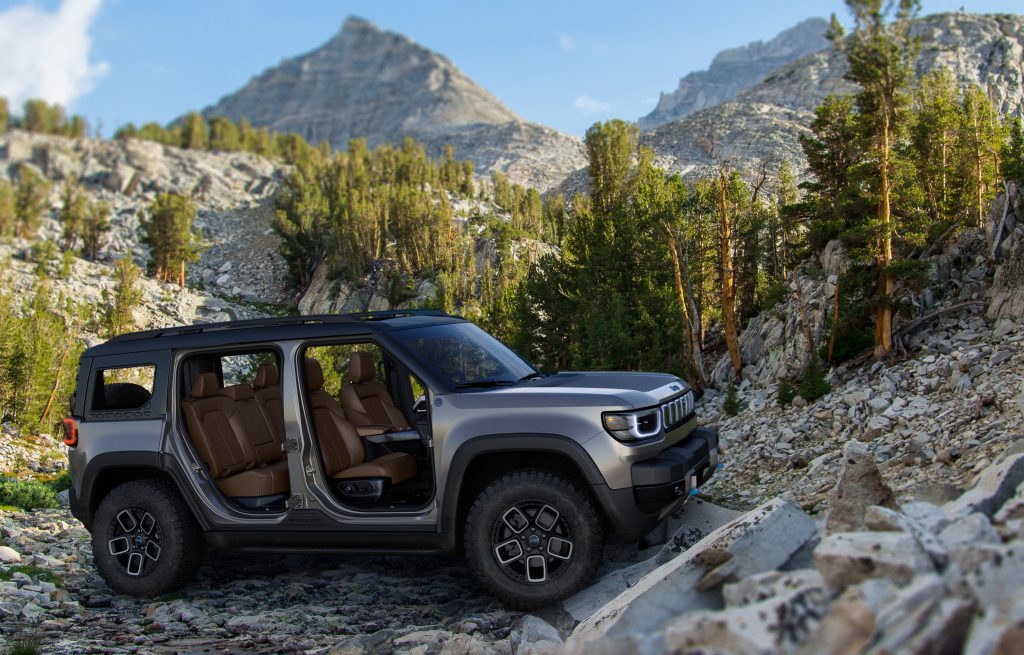 I asked my question not because I truly think the Recon will be able to fill the Wrangler’s shoes off-road — and I certainly didn’t think Jeep would just give up the Wrangler name — but I do think the Wrangler as we know it today just isn’t going to work as an EV, especially not near-term. And if the Wrangler is going to go EV, I could see it becoming something like this Recon. I’ll go more into that in a second, but first let me tell you what I know about the Recon (it’s not much).

It’s a fully-electric off-road vehicle capable of crossing the Rubicon Trail, per Jeep. Plus it can apparently “reach the end of the trail with enough range to drive back to town and recharge.” It will come with an electronic locker, skid plates, tow hooks, and “aggressive off-road tires,” plus a power sliding top, removable doors, frunk, and removable glass. That last bit is quite interesting; check out this photo showing the missing glass in the Recon’s cargo area. 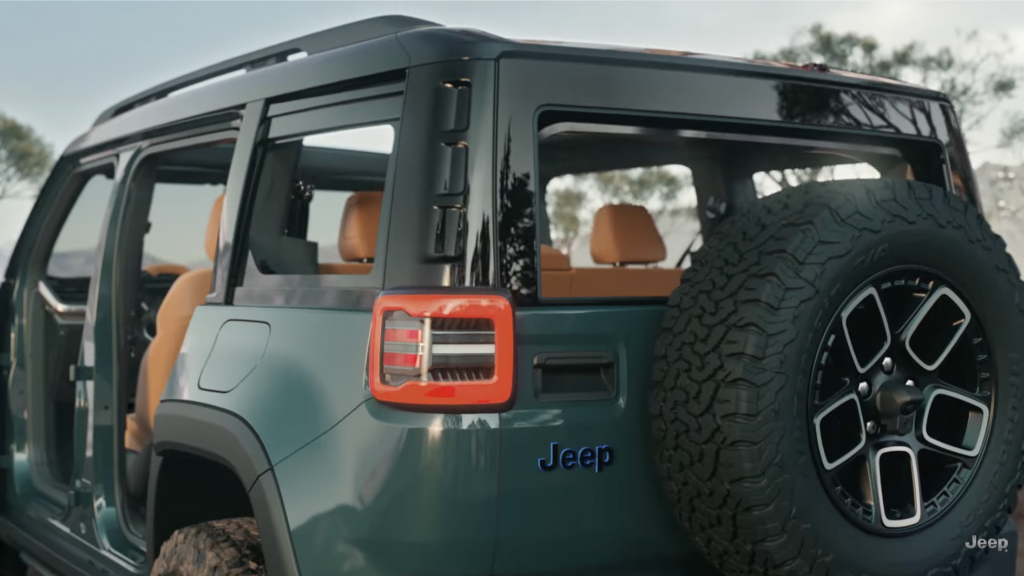 Per Stellantis, the Recon represents a “Reinvention of the modern American icon,” and sits on the Stella Large alongside the Wagoneer S EV, which I’ll write about here in a moment. (You can learn more about the STLA or “Stella” platforms that will propel Stellantis in to the future here). Customers can reserve their Recon in early 2023, with the vehicle hitting the market in 2024. 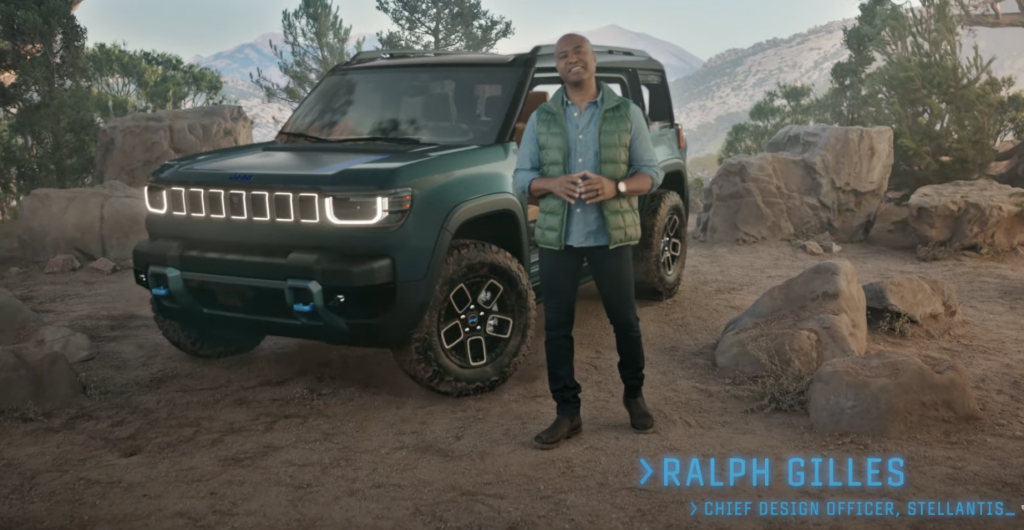 Okay, so now that I’ve dished out the limited info I have about the Recon, let’s talk about the tricky spot Jeep is in right now.

The Jeep Wrangler — the vehicle that all other Jeeps emulate or draw inspiration from in some way or another — is a solid-axle off-road vehicle with huge knobby tires, tons of ground clearance, and the aerodynamic profile of a barn. These attributes don’t work very well in an electric vehicle, because they lead to fairly high Vehicle Demand Energy, i.e. energy needed to just shove the vehicle down the road. In other words, the Wrangler is, by nature, not a very efficient machine. The current gas Wrangler made some improvements over its predecessor, and can score MPG figures in the 20s. This isn’t great, but gas is cheap enough, blow-molding a tank to take more fuel is simple enough, and a customer can fill up in two minutes.

An inefficient overall vehicle design catered towards off-road capability works as an ICE, but in an EV, it causes all sorts of issues. Because it takes so much energy to get down the road thanks to those tires and aerodynamic inefficiencies like high ground clearance and sharp corners, range decreases just like it does on a gas car. But increasing the “tank size” on an EV is both heavy, expensive, and environmentally taxing. I could probably dig up some ABC coefficients from the EPA and roughly calculate how big of a battery, approximately, one might need in order to score 250 miles of range on a modern Jeep Wrangler (I’d have to make a few assumptions); suffice it to say: it’d have to be big. And thus, the vehicle would have to be expensive and heavy and filled with precious metals.

The current Wrangler as it sits ain’t cheap, but given how simple it is (it’s a body-on-frame vehicle with the same engine and transmission as darn-near every other Chrysler), you can bet the margins are good, and Jeep doesn’t want to give up on that.

The other issue is the solid axle, which is a key ingredient that has alway made the Wrangler the king of low-speed off-roading over uneven terrain. There’s a reason that the 4×4 museum in the UAE only includes solid-axle vehicles, and there’s a reason that, as good as the new Ford Bronco is off-road, it seems per comparison tests that the Jeep still has an edge. The solid axle has always been the Wrangler’s trump card (especially since it makes lifting the vehicle easier than if it had independent suspension).

The problem is: An electric car with a solid axle is tricky for a number of reasons that our suspension engineer Huibert Mees discussed in his article “The Surprising Ways Electric Car Suspensions Are Different Than Gas Car Suspensions: Ask An Engineer.”. I’ll quote him heavily here: 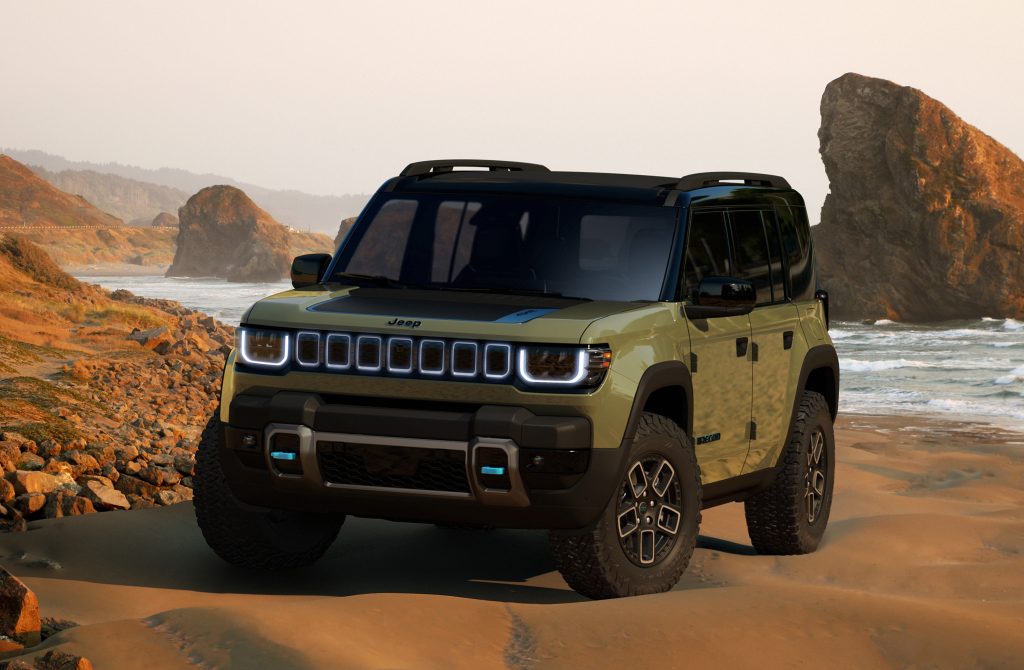 Obviously, right now the Wrangler is sticking around with its gasoline, diesel, and plug-in hybrid powertrain options. The latter is a great compromise that allows the Wrangler some amount of EV-only driving while maintaining the JL’s tough and highly capable drivetrain architecture. Jeep did show a Magneto concept car at the Easter Jeep Safari, and though it had a solid front axle, it was basically a Wrangler with an electric motor hooked up to the manual transmission. I can’t imagine something this crude would work as a production vehicle, as it severely compromises battery packaging.

The Recon Looks Like It Should Do Well Off-Road 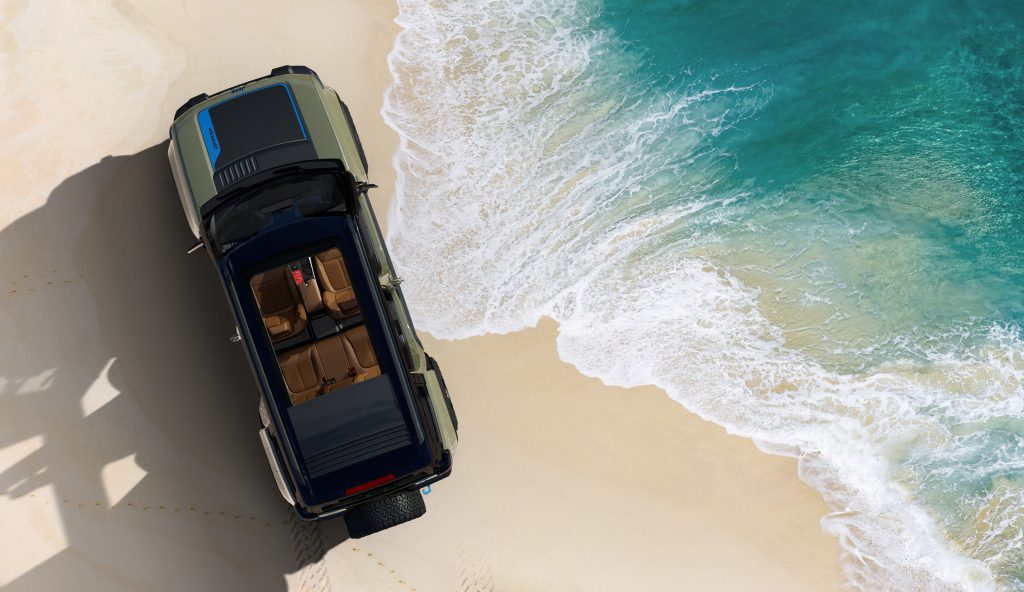 Without knowing much about the Recon’s features, and without having driven it, it’s hard to say how good it will be off-road, but one can learn a lot from pictures (because when it comes to off-roading, geometry is king, as I often say). The recon’s short overhangs look great, as do its big tires; I have concerns about those low rocker panels, but hey, you’ve got to fit batteries under there. If I had to guess, this thing — in highest trim — will utilize air suspension to offer decent highway range while still maintaining good ground clearance off-road. This is the direction I see most “hard-core” off-roaders moving as the world becomes more electric. We’ve already seen it on the new Defender, which is a gas car; EVs will make the pull towards efficiency (i.e. reduced Vehicle Demand Energy) even more important, and the best way to do that while still maintaining good off-road capability is air suspension (see Rivian R1T).

I still remain on the edge of my seat to see which direction the Wrangler will go if it does become fully electric in the future. The obvious guess would be to say that it will go to independent suspension with air bags and big tires (probably like this Recon), but I’m hopeful that Jeep pulls something cool out of its hat, and the Wrangler — if it does go fully electric — somehow keeps a solid axle. If only because it’s awesome.