When Mercedes-AMG first announced that the next C63 would feature an plug-in hybrid four-cylinder powertrain, the automotive world recoiled in horror. After all, the V8 was an AMG hallmark, and dropping half the cylinders from the C63 is a bit like slicing your fun uncle in half. However, now that the new car is unveiled, it seems like AMG has traded displacement for a whole lot more power. Say hello to the Mercedes-AMG C63 S E Performance, a very potent C-Class with a very long name. 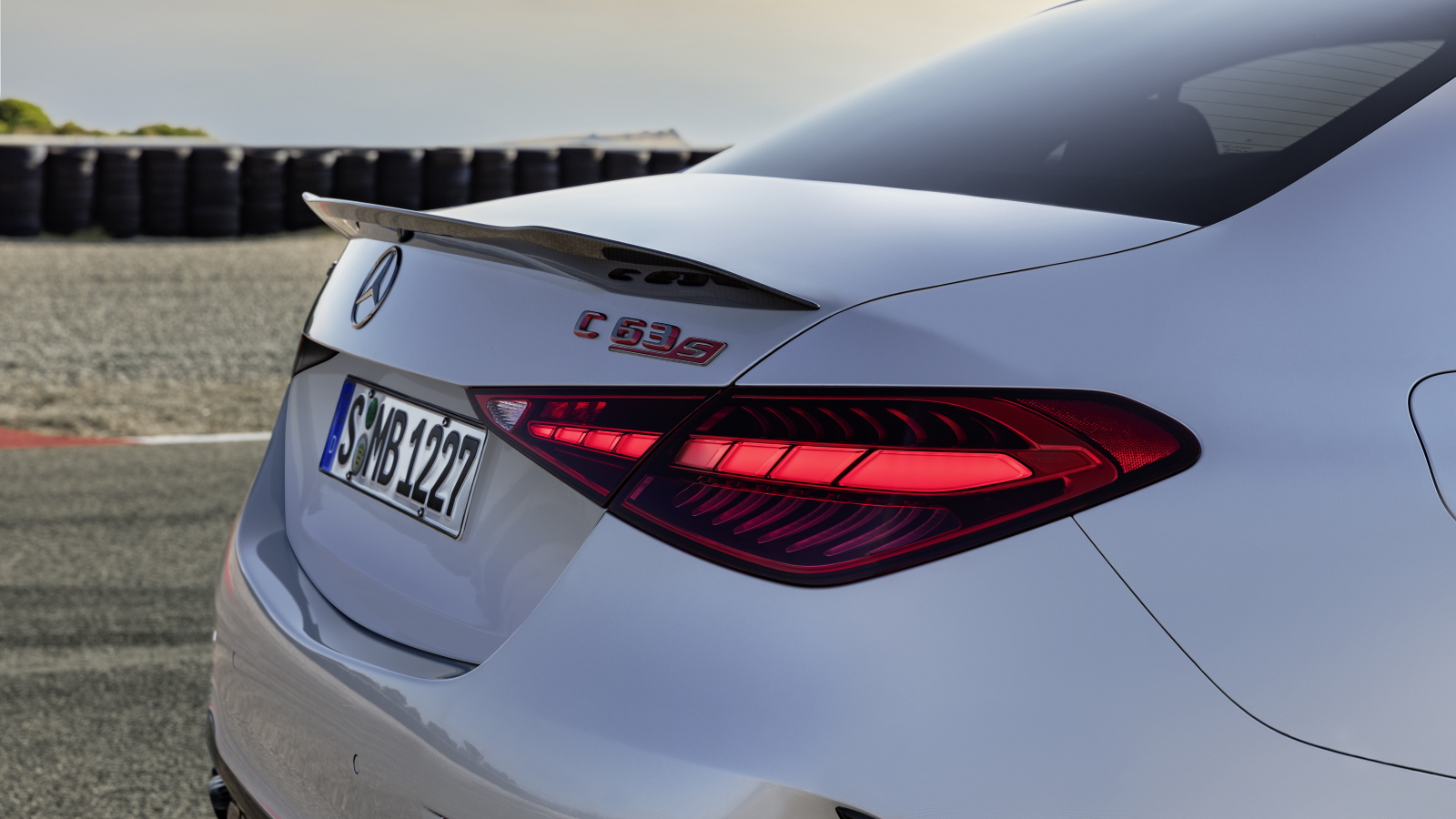 So what makes this new car tick? Let’s start with the engine itself. It’s Mercedes-AMG’s M139 two-liter turbocharged four-cylinder engine. At literally half the size of the old C63’s V8, it represents both a marked departure from tradition and a technological marvel. Good engines are built with good bones, so the M139 uses a closed-deck block that can take an immense amount of pressure. Then, Mercedes-AMG specified separate cooling systems for the head and crankcase to keep the bottom end warm and lubricated and the top end clear of any heat-based detonation.

Once all that was lined up, Mercedes-AMG bolted on a big turbocharger with a little trick up its sleeve. A very thin electric motor is sandwiched in between the turbine and compressor wheels to spool up the turbocharger before exhaust gases really get going. This aids response and lets the C63 crank out 469 horsepower at 6,750 rpm and 402 lb.-ft. of torque in a peaky band from 5,000 rpm to 5,500 rpm, making this the most powerful production four-cylinder engine of all time. Mated to an all-wheel-drive system with an electronically-controlled limited-slip differential on the rear axle, the new engine should put its power down quite confidently no matter the condition of the asphalt. 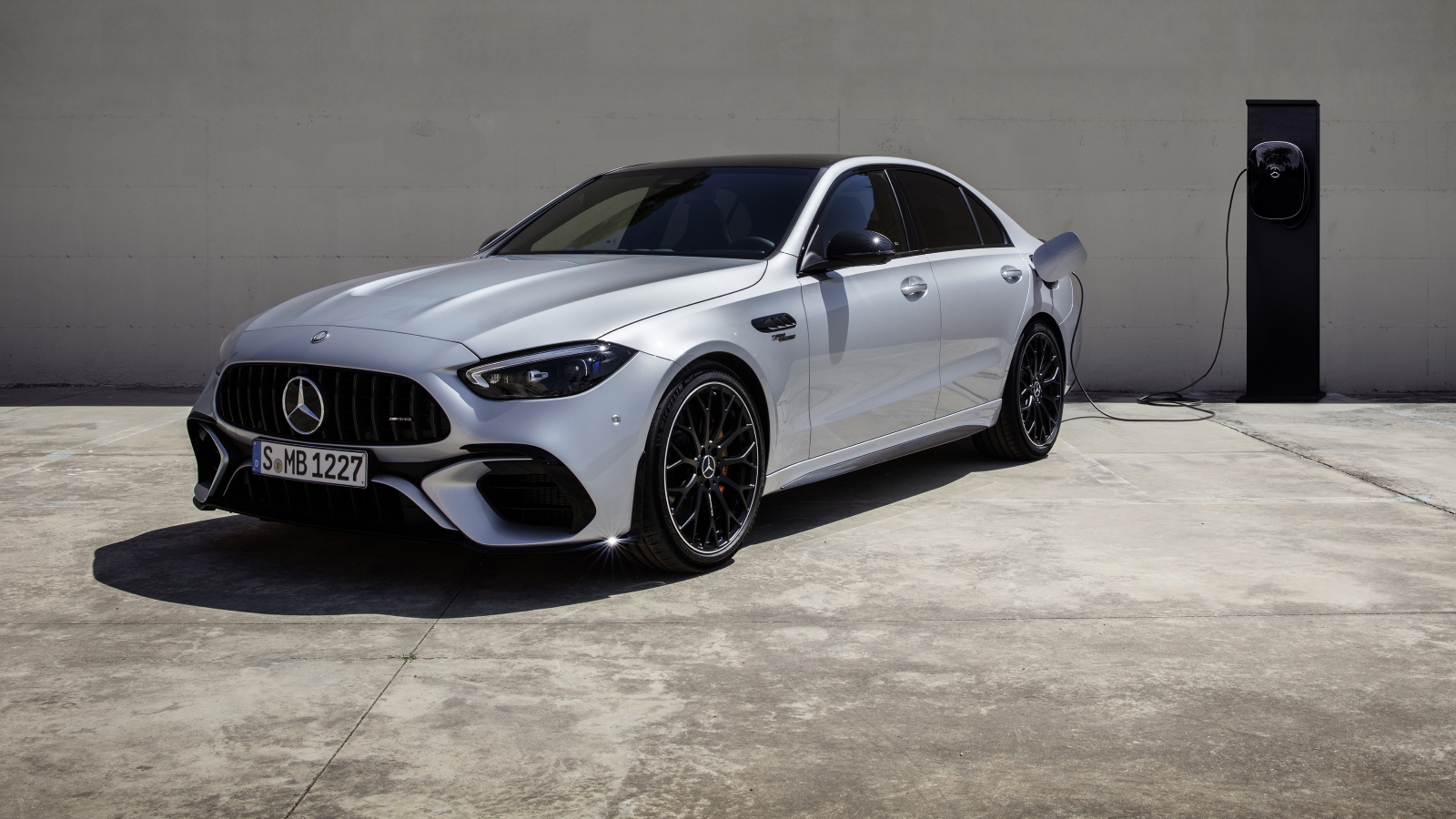 However, 469 horsepower just isn’t enough for C63 S owners who’ve grown used to the old car’s 503 horsepower, so Mercedes-AMG has brought in a little bit of electricity to sweeten things up. When I say a little bit, I really mean a lot. A 6.1 kWh battery pack feeds a two-speed electric motor on the rear axle. Think Porsche Taycan but scaled-down. This motor kicks out 201 horsepower and 231 lb.-ft. of torque and engages second gear right around 85 mph. To keep all this electrification happy when enthusiastic C63 S E Performance owners inevitably curbstomp the accelerator pedal, the battery’s surrounded by 14 liters of coolant. Total combined system output? 671 horsepower and a tarmac-rippling 752 lb.-ft. of torque, good for a claimed zero-to-sixty mph time of 3.3 seconds.

Hold on, that’s not that quick for a 671-horsepower all-wheel-drive compact sedan. Don’t get me wrong, zero-to-sixty in 3.3 seconds is still quick, but it doesn’t move the needle massively from the significantly less powerful BMW M3 Competition xDrive. More importantly, I wonder what acceleration numbers will look like when the plug-in hybrid battery pack is out of juice. Mercedes-AMG estimates an all-electric range of just eight miles, not exactly a usable figure by American standards. At first I thought that AMG was really sandbagging the zero-to-sixty time, until I saw how much the new C63 S E Performance weighs. According to Mercedes-AMG, this thing has an EC curb weight of 2,111 kilograms, or 4,654 pounds. In the words of our own Matt Hardigree, “Sheeeeeeeeeet.” 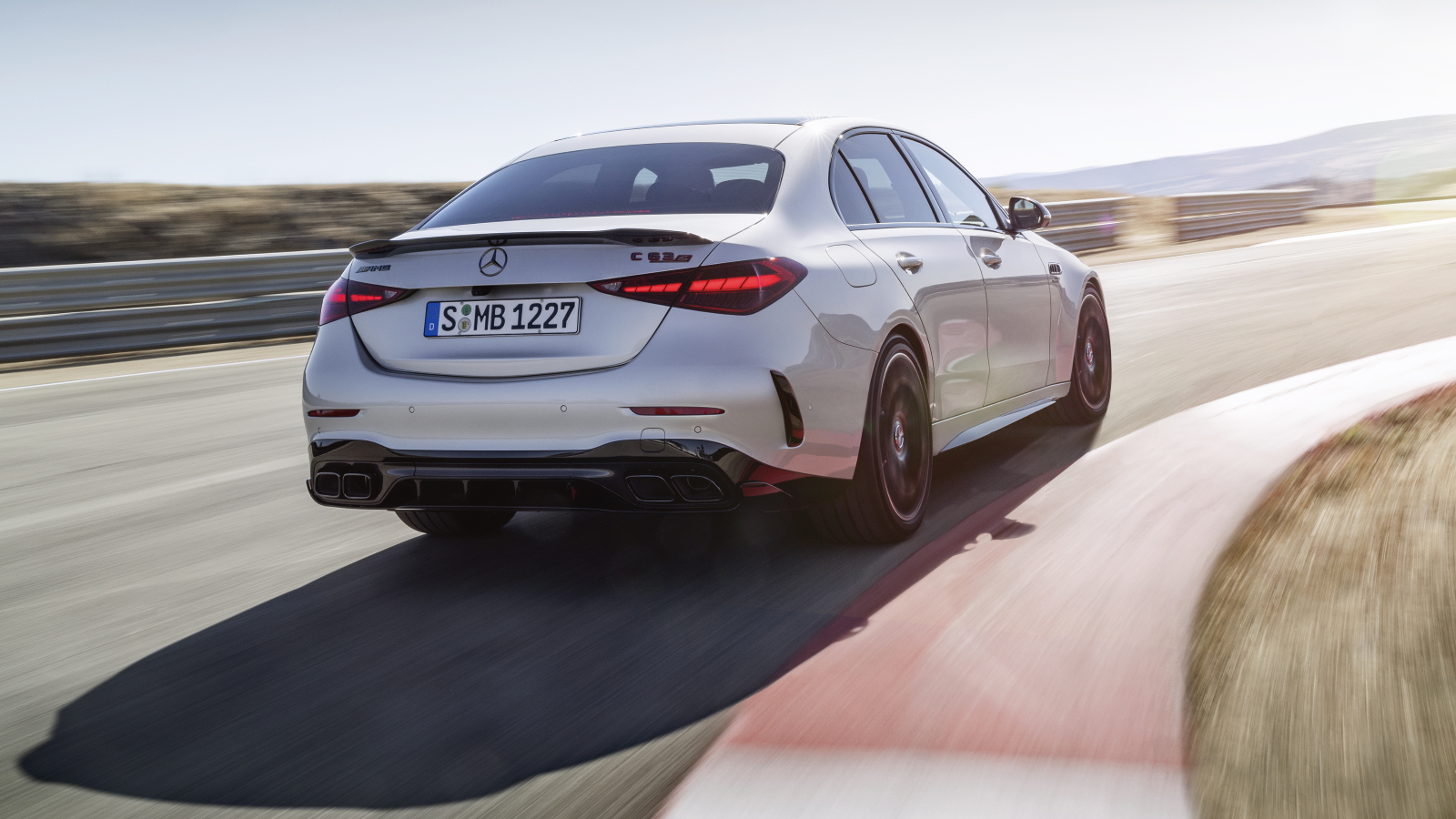 Weight is the enemy of well, everything. A heavier car carries more inertia and is thus harder to accelerate, stop, and turn than a lighter car. In an attempt to counteract this, AMG has given the new C63 2.5 degrees of rear-wheel-steering, externally-valved electrohydraulic dampers, and regenerative braking that can shove more than 100 kW of power back into the battery. Good stuff, but I’m not terribly confident that it’ll transform the new C63 S E Performance into a ballet dancer.

Reading through the press bumf, a nagging question kept popping into my head: Is the new C63 still relevant? The first C63 was great, even if the regular W204 C-Class felt somewhat janky. Massive V8 up front, drive to the back, just a slap-happy lunatic of a car. The W205 C63 moved the game on further, partly because the four-liter biturbo V8 offered heaps of thrust and partly because the interior was class-leading at the time. From the wood to the plastics, it made the F80 BMW M3’s interior feel a bit nasty and showed the aging B8 Audi RS5 how to do things. The problem is, every new compact supersedan has a good interior and many offer the charisma of six cylinders. 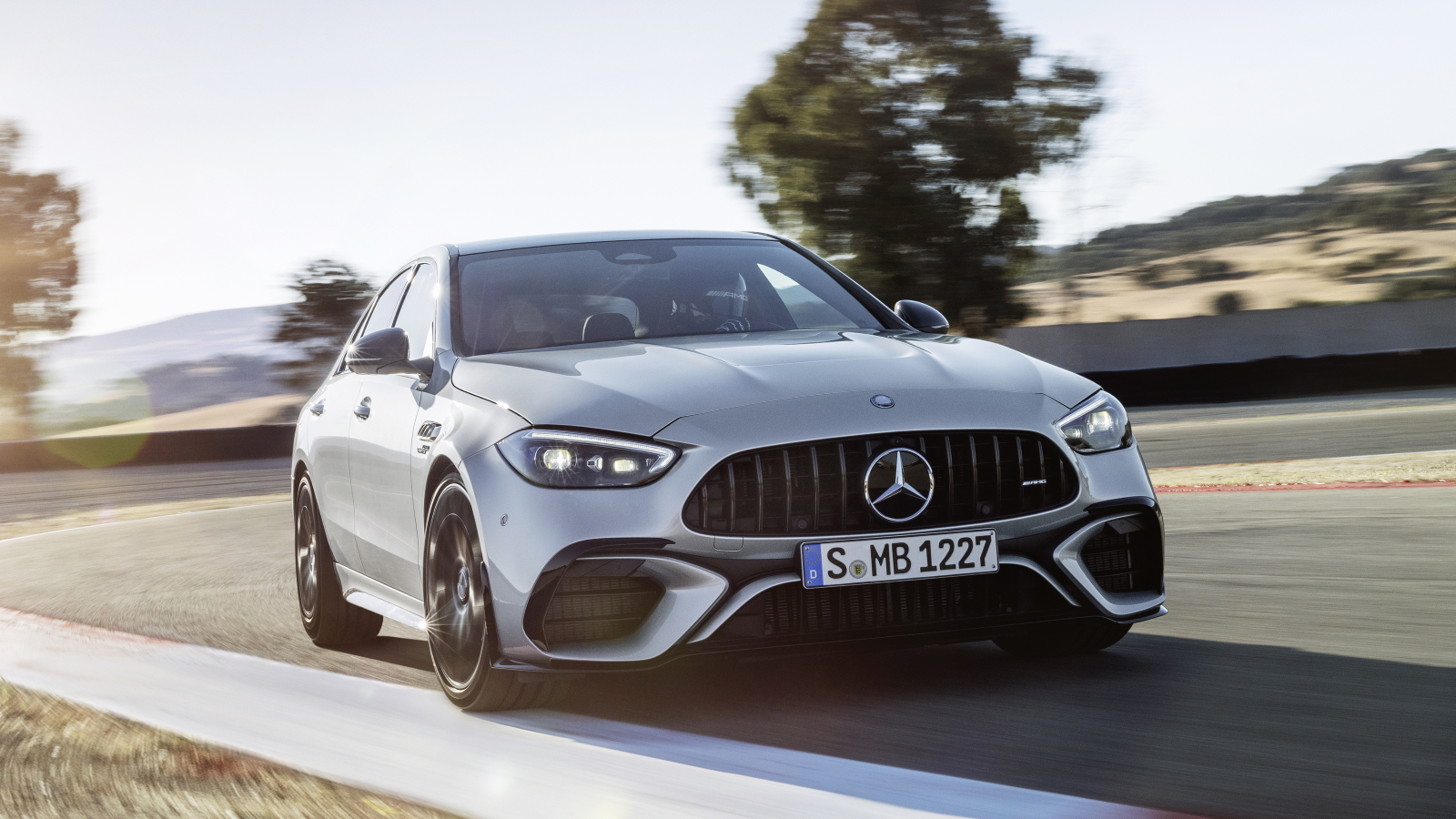 The 90-degree 2.9-liter V6 in the Alfa Romeo Giulia Quadrifoglio is unusual and bewitching, like a GM 3800 that became an opera singer. The S58 inline-six in the new BMW M3 rips silk all the way to redline. The Cadillac CT5-V Blackwing isn’t terribly far off of the compact German supersedans on price and offers a thumping supercharged V8. While the M139 four-cylinder engine in the C63 is hugely effective, prior experiences in vehicles like the CLA 45 have left me a bit cold. I like a fire-breathing turbocharged four-cylinder engine like a hot Mitsubishi 4G63, but Mercedes-AMG previously hasn’t given the M139 the aural fury it deserves.

I’m sure the new C63 S E Performance is brilliant. After all, 671 horsepower is a lot of shove no matter how you look at it, and Mercedes has the best ambient lighting in the business. However, I’m a bit concerned that it’s lost its soul. While everything aside from the curb weight looks good on paper, cars aren’t driven on paper. The old C63 S was a lairy, loutish German muscle car. Big engine, small car, drive to the back, buy stock in tires. In contrast, the new one seems extremely serious, potentially venturing into the reptilian domain of Audi. The F80 BMW M3 was for people with Sperrys and Apple Watches while the old C63 was for people with special Nike SB Dunks and IWCs. Now though, if you want a very fast small sedan that doesn’t take itself too seriously, you’re likely shopping Italian or American. It’s funny how things change.

Thomas is a Nu Rave-blaring, heel-toe downshifting, maple syrup-swilling, chassis-geeking, junkyard parts-hauling, floppy-haired scenester who's been writing about cars since college. His current ride is a 2006 BMW 325i with the six-speed manual gearbox. Instagram: @thomas.hundal Twitter: @thomashundal
Read All My Posts »
PrevPreviousQuantum Leap Is Tearing This Blog Apart – The Autopian Podcast
NextThe Volvo EX90 Will Either Be The ‘Safest Volvo Ever’ Or Will Help The Machines WinNext