Welcome back to Shitbox Showdown! Today we’re going to look at one of the great all-time rivalries, right up there with Coke vs. Pepsi, Cardinals vs. Cubs, and David Lee Roth vs. Sammy Hagar. But first let’s see which car won yesterday’s lengthy battle:

Well, that’s the long and the short of it. The bar graph is the opposite of the overall lengths, and the little Chevy Sprint is our winner. I do like the idea of building a twin-engined all-wheel-drive monster out of the two cars the seller was parting with; It seems like a noble amd terrifying way to die.

Ford introduced the world’s second pony car, the Mustang, on April 17, 1964 (Waitaminnit! Second, you say? Yes, Plymouth beat them to market by two weeks with the Barracuda). [Editor’s Note: Mark, a Barracuda is a fish. The entire concept of “Pony Car” came from the Mustang, which, per all the scientific equine research papers I’ve been reading, is basically a pony. -DT]. It was an immediate success, and left crosstown rival GM without a competing vehicle for a couple of years, until September 29, 1966, when Chevy unveiled the Camaro. When asked what a “Camaro” was, a GM product manager replied, “A small vicious animal that eats Mustangs.”

And they’ve been at each other’s throats ever since.

For a long time, used Camaros and Mustangs were performance car bargains, a good way to get some cheap thrills in a reasonably stylish package (sometimes more stylish, sometimes less, depending on the era). But now that early examples of both cars are considered classics, and even the ’80s Fox-body Mustangs and third-generation Camaros are starting to creep up in price, kicks just keep getting harder to find, as the old song goes. [Editor’s Note: I have no idea which song Mark is referring to, here. -DT]

But at the moment, twenty-something-year-old examples of either car are right at the bottom of their depreciation curve, so there are still some to be found for our meager budget. We’ll have to settle for six-cylinders; V8s either don’t run or cost too much. Let’s take a look at one of each. 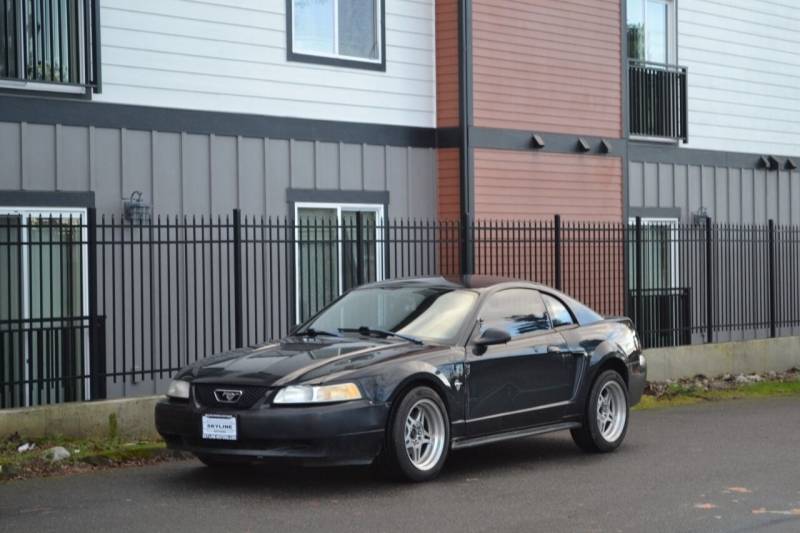 Runs/drives? We can assume

This is a fourth-generation Mustang, the first year of the “New Edge” refresh. Like all Mustangs before it, and quite a few after, it’s about as complicated a machine as a C-clamp. Sit down, stomp on the right pedal, do something antisocial. While not as raucous as its V8-powered stablemates, the 3.8 liter “Essex” V6 in this car received a serious power bump for 1999, up to 190 horses. Particularly when backed by a T-5 manual as in this car, it can still manage some mischief. But it’s also tractable enough to drive every day. 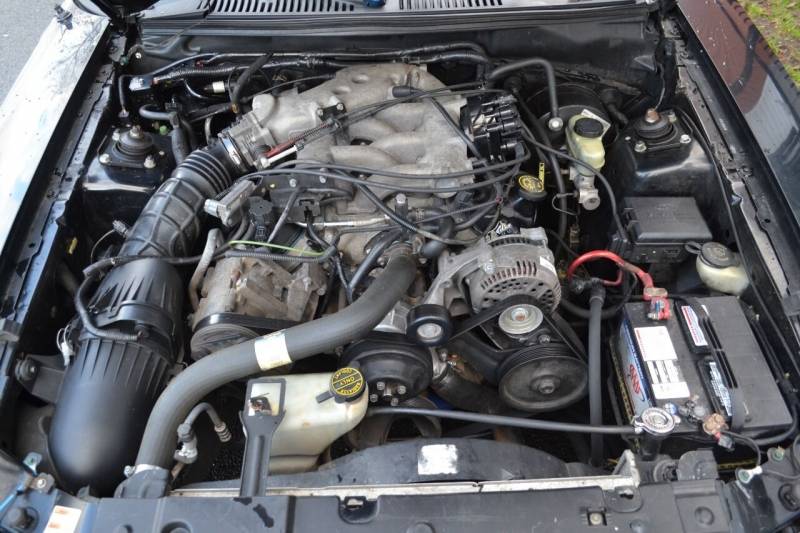 And personally, I think the New Edge Mustang is a sharp-looking car, much better than the blobby mess that preceded it. This one looks well-used, but reasonably well-kept. It’s got a lot of miles, and coming from a buy-here-pay-here lot, probably not much written history. 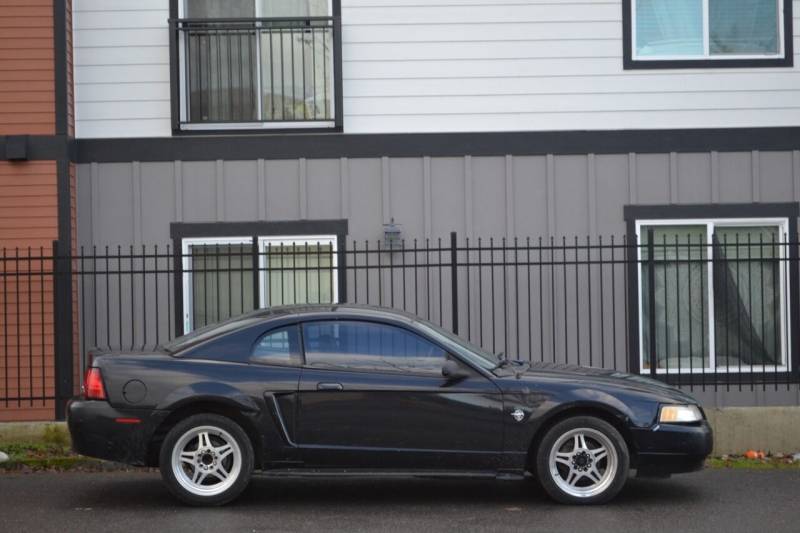 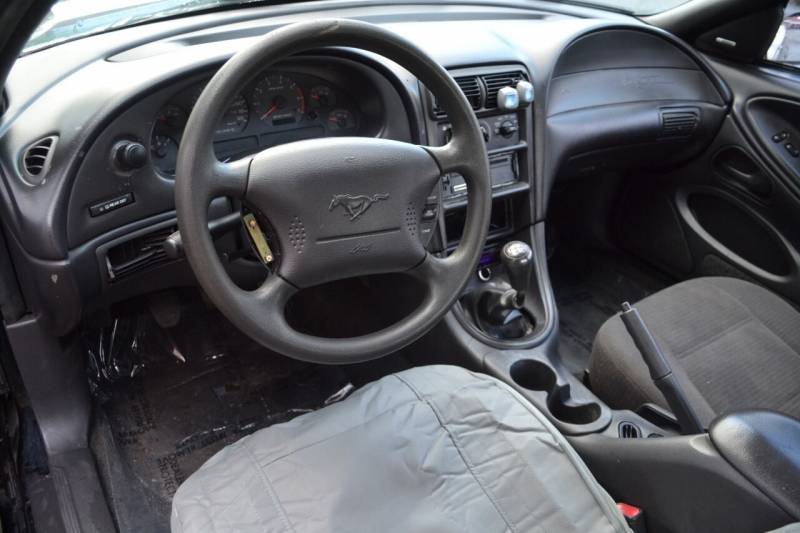 Inside, a cheap parts-store seat cover and some missing cruise control buttons on the steering wheel show the miles, but it could be a lot worse. You could probably rely on this car as a daily driver, if an inspection didn’t turn up any surprises. 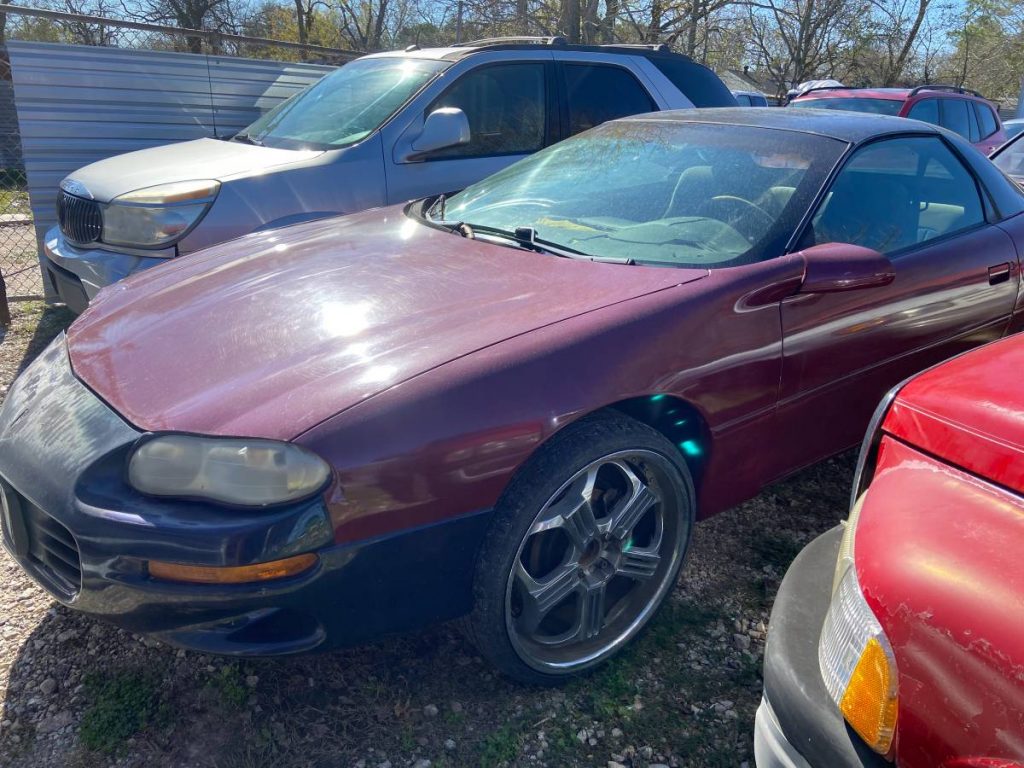 Camaros always seem to end up one notch scruffier than Mustangs. I don’t know if it’s because they get driven harder, or cared for less well, or if GM’s materials just get grubby-looking faster than Ford’s. But looking at this Camaro, compared to the Mustang above, you’d never guess it had half as many miles on it. 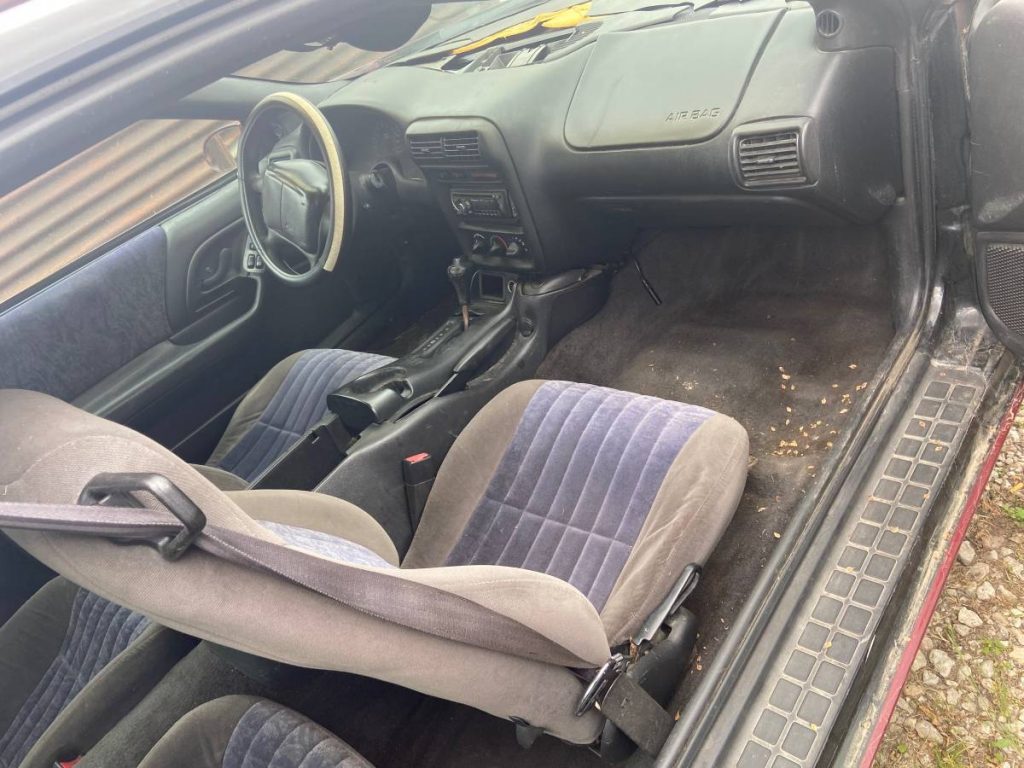 Mechanically, it’s at least as tough, if not tougher. In 1996, GM began using the Buick-derived corporate 3800 V6 as the base engine in the Camaro and sister model Pontiac Firebird, and it was a nice bump in power and refinement from the older 3.4 liter V6. This one is backed by an automatic; I tried to find a manual Camaro so we could compare apples to apples, but no dice. 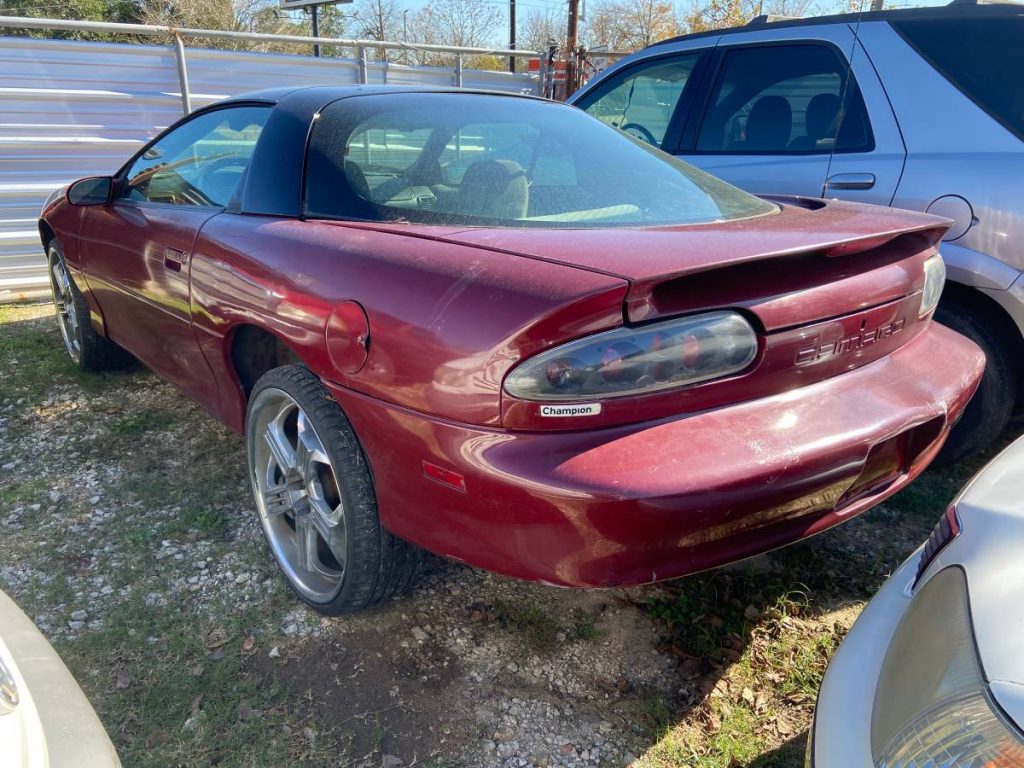 This poor Camaro has suffered some questionable modifications, namely the aftermarket taillights and those awful wheels and rubber-band tires. But it’s standard five-lug GM, so you can replace them with just about anything. It has also been booped in the nose, and the seller settled for replacing the bumper skin with a mismatched junkyard unit and leaving the sheetmetal damage alone. 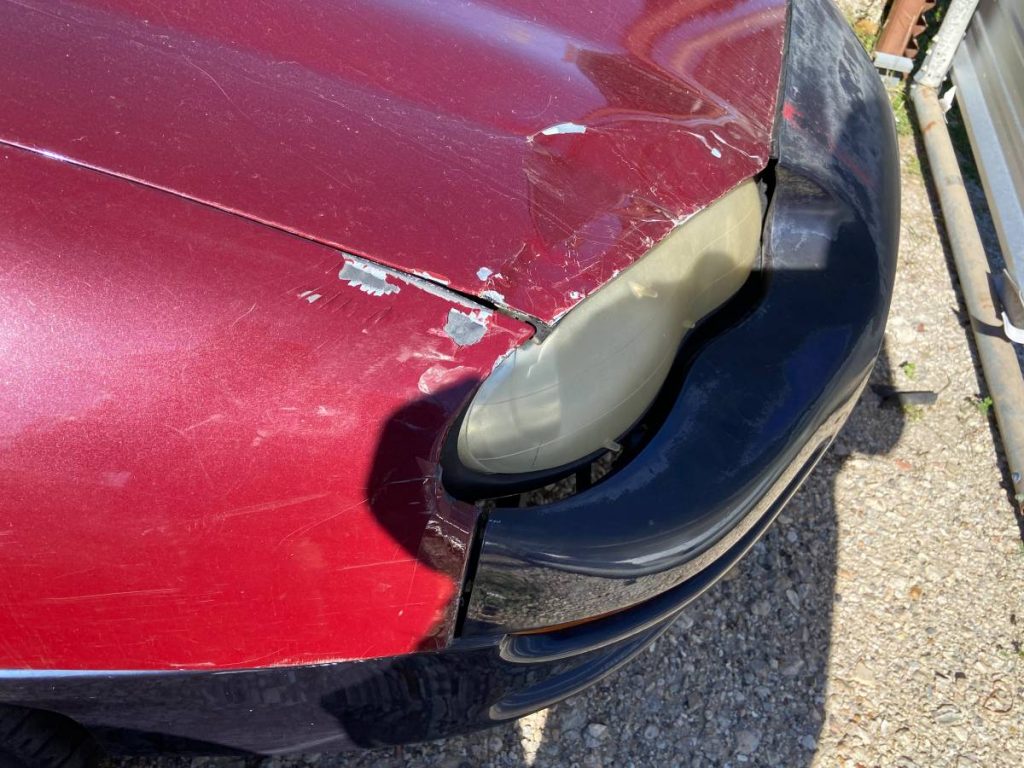 Still, it’s intact and drivable, and if the seller is to be believed, runs really well. And like the Mustang, the Camaro is designed and intended to be “just a car,” not some precious exotic plaything. You can use a Camaro as your only car if you want; it will carry groceries as well as any minivan, and the six-cylinder models even get reasonable gas mileage. Sure, some plastic stuff will break, but the basic core of the car is stout.

Really, these two cars are almost interchangeable, except for a little brand loyalty. The Mustang is a little smaller and sportier; the Camaro has a hatchback and a bit more bad-boy reputation. Which one suits you better?