The BMW M3 Touring Is A Fast, Ferocious, Family-Friendly Wagon That Americans Can’t Have

The last time BMW put an M prefix on a wagon, things were very different. In the second half of the aughts, 1,025 E61 M5 Tourings rolled out of the gates at Dingolfing, packing fire-breathing V10 engines and daytime running lights that could pierce the very fabric of your soul. Come on, I saw the Top Gear video and I bet you did too; that M5 Touring was slithering about on a runway like a cheetah on a freshly-waxed floor. Bewitching stuff. So what if the rod bearings were made of brie and the SMG gearbox would go wrong every time Mercury entered retrograde, the E61 M5 is what dreams are made of. A decade and a bit later, things are a bit different. While the BMW M3 Touring isn’t a fire-breathing V10 monster, it promises to be even quicker than its long-roofed forerunner.

As the M3 Touring is a full-on M3, it gets two lung-sized grilles and absolutely zero cohesive lines on the entire front end. I know that banging on about the nose is beating a dead horse but come on, what’s a dead horse going to say? It’s dead and I’m the one with the Louisville Slugger. Seriously, this car should come with a pixelated face and a sensitive content warning, for its front end may actually scare pedestrians. However, there is a way to make the M3 Touring look better – simply move towards the back.

Look, there’s just something about a wagon with massive freaking fender flares. Big, haybale-sized things that protrude like the rear arches on a DTM car. Once again, I have to hand it to my man Sir-Mix-A-Lot on this one. It’s not just the flares that are brilliant, the lower rear valence looks purposeful even if it’s 95 percent bullshit, and the Gurney flap-equipped spoiler is just the right size to make a statement without coming over all brash. Finishing everything up are four cannon-sized real exhaust tips. Like houseplants and hundred dollar bills, exhaust tips are just better when they’re real. Job well done on the rear three-quarter view, I reckon. 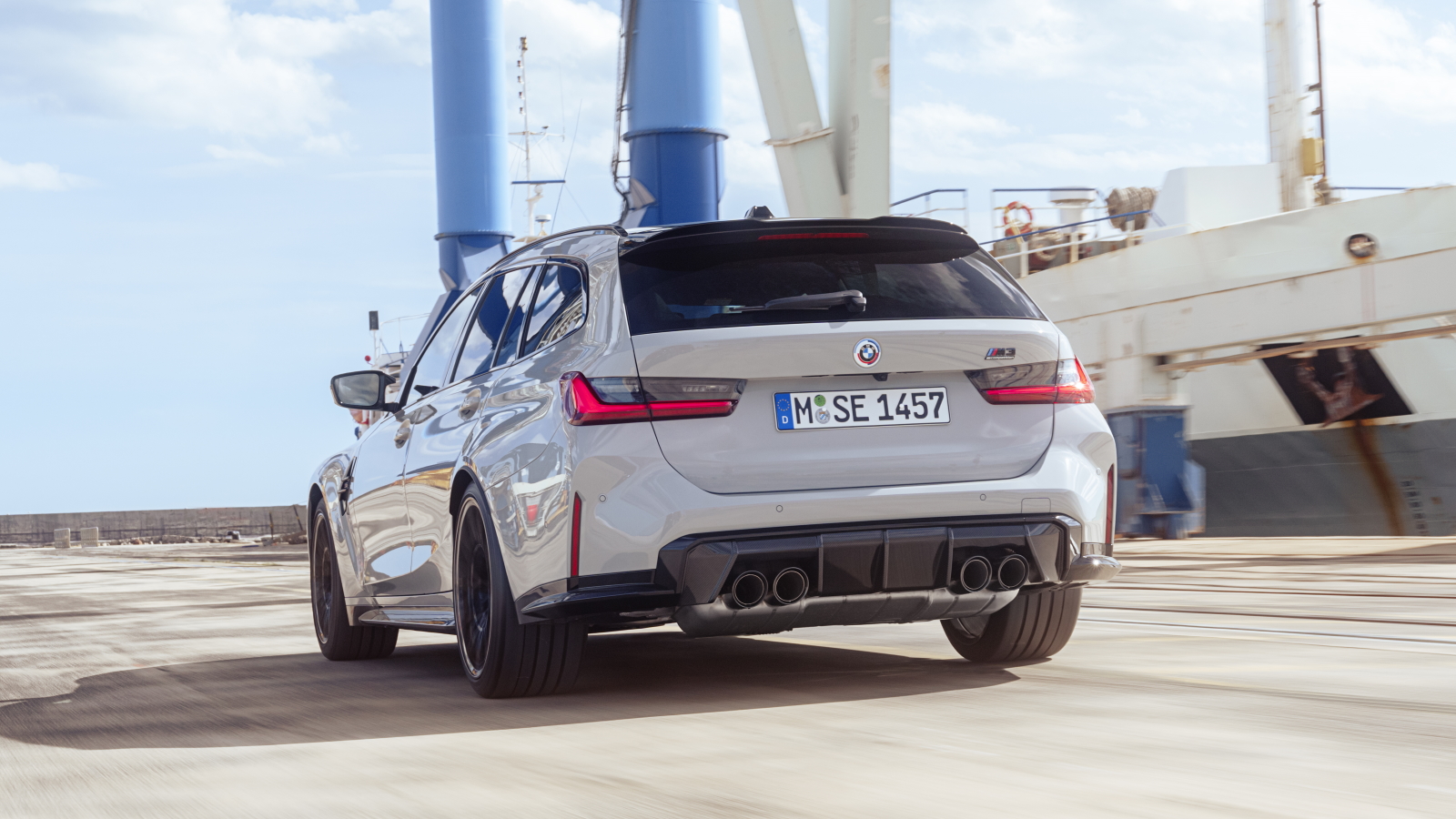 Because the M3 Touring is very much a wagon, its Bavarian overlords wanted it to do all the practical things, all the time, very, very quickly. As such, it gets the powertrain from the M3 Competition xDrive, and that dish of word salad means joy and minor disappointment. Let’s start with the bummer – the only gearbox on offer is a conventional torque converter automatic. While the ZF 8HP eight-speed is a brilliant automatic gearbox, it feels a bit disengaged compared to the non-wagon’s manual option. However, while disengagement is bad regarding the gearbox, it’s good regarding the transfer case. Yes, the driver of an M3 Touring can press some buttons to shut the front tires up and let the rear wheels do all the talking. Rear-wheel-drive when you want it, all-wheel-drive when you need it. Fabulous.

Of course, all-wheel-drive when you need it doesn’t just apply when carving up snow, it can also help an M3 Touring driver theoretically pull a bus-length gap on a Cadillac Escalade-V. Under the hood sits BMW’s familiar S58B30 twin-turbocharged inline-six, tuned up to 503 horsepower (375 kW) and 479 lb.-ft. (650 Nm) of torque. It spits power to all four wheels on the way from a dead stop to 62 mph (100 km/h) in a quoted 3.6 seconds and 124 mph (200 km/h) in 12.9 seconds. Tick the options box for the M Driver’s Package, and this compact family car will eventually hit 174 mph (280 km/h). Proper big-league numbers.

Power is nothing without control, so the M division has been hard at work stuffing absolutely everything from an M3 sedan into a wagon shell. BMW’s been using double-jointed MacPherson strut front suspension and a five-link rear suspension design for generations now, but they adopt M-specific tuning and geometry here, along with adaptive dampers. Brakes are either iron with big fixed front calipers or carbon ceramic, while the wheel situation is a little bit crazy. See, not only are the wheels forged, they’re actually staggered diameters, 19 inches up front and 20 out back. Hey, why not?

As far as the important wagon stuff goes, the M3 Touring has that covered. Not only can the rear window open separately from the hatch for easy loading of small items, dropping the 40:20:40 rear seat gives an M3 Touring driver 53.3 cubic feet (1,510 L) of cargo space. Want to carry cargo and passengers? No worries, roof rails come standard. As for tech, BMW’s latest iDrive 8 infotainment system with a 12.3-inch digital instrument cluster and a 14.9-inch curved touchscreen makes an appearance here, while front seat occupants can choose between standard seats or optional carbon buckets. If you’ve ever been cast as the beanstalk in your school’s production of Jack and the Beanstalk, tick the box for the fabulous buckets. Those who can’t turn sideways and hide behind a cocktail stick will likely find the buckets to be like sitting on ten-gallon pail, but you never know if you don’t try.

So, pace, space, and one ugly face. The M3 Touring seems to have the lot, and deliveries officially start later this year. There’s just one problem. See, BMW just doesn’t think that America is the right market for the M3 Touring. America’s apparently gone crossover-mad, so Americans can settle for an X3 M crossover if they need to haul stuff, an X4 M crossover coupe if they’re particularly vain, or take an actual M3 sedan if they want sedan-like handling.

However, as much fun as it sounds to deep-fry a Colt 1911 and blame Taco Bell discontinuing Mexican pizza on George W. Bush, I am not, nor will likely ever be, American. I come from the land of the ice and snow. No, not that one, the one that let a white dude from Toronto have a number one reggae hit. Yes, I’m talking about Canada, a country where the best-known national dish roughly translates to “a mess.” We know all about fuddle-duddle [Editor’s Note: I had to Google this Canadian nonsense. – JT], shinny [Editor’s Note: This, too. – JT] , and ten-ply (that means soft) [Editor’s Note: I get it! Like toilet paper! – JT], and we know exactly what we want when it comes to our cars.

See, midsize cars don’t do very well in Canada. However, small cars loaded up with options do extremely well. We know damn well that cars move just one person most of the time, and when coupled to our love for heated steering wheels and driving pleasure, that sensible predisposition can create an interesting automotive landscape. See, wagons actually do alright here. Mercedes sold the outgoing C-Class wagon here in C300 and C43 form, and I’ve seen people actually driving around in them. Of equal importance, fast posh cars do very alright here. According to Automotive News Canada, only two countries bought more AMG Mercedes products in 2017 than Canada – The United States and Germany. More impressive still, if you look at how many Mercedes products sold are AMGs, Canada’s product mix topped the lot. One in four Mercedes-Benzes sold in Canada in 2017 were AMGs. One in four!

This isn’t just some weird Mercedes-Benz quirk either. In 1994, BMW Canada discovered a loophole that allowed small batches of Norwegian-market cars to be sold in Canada without having to go through a formal homologation process. In came 45 examples of the full-fat European-spec E36 M3, all of which found their way into the garages of happy buyers. That level of enthusiasm isn’t just a thing of the past – BMW Canada saw sales of M cars increase by 38 percent last year. Not a bad sales jump by any means. So, here as I stand, hand on my heart, I don’t promise to not mock the M3 Touring’s ugly front clip, but I would genuinely like to see it come to North America, even if just for the Canadian market. Automatic gearbox, beaver-toothed front end, and all.

Thomas is a Nu Rave-blaring, heel-toe downshifting, maple syrup-swilling, chassis-geeking, junkyard parts-hauling, floppy-haired scenester who's been writing about cars since college. His current ride is a 2006 BMW 325i with the six-speed manual gearbox. Instagram: @thomas.hundal Twitter: @thomashundal
Read All My Posts »
PrevPreviousBetter than a $700 Tracker? 1986 Isuzu Trooper vs 1956 Willys Jeep Wagon
NextYour Next Shipment Of Greasy Car Parts Might Arrive In An Electric FedEx Delivery VanNext