It’s been a hot year for electric luxury crossovers. The Genesis GV60 is an absolute ripper, the Tesla Model Y is selling like toilet paper in April of 2020, even Cadillac and Lexus are jumping in the pool with the Lyriq and RZ450e respectively. Not content to let the competition waltz on by, Audi has been re-working its biggest electric crossover to create the Q8 e-tron.

First, a little bit of explanation. Despite riding on the same MLB platform as the Q8, the Q8 e-tron isn’t an electric Q8. It’s actually an updated version of Audi’s e-tron crossover, which isn’t the same as the e-tron GT sedan based on the Porsche Taycan or the Q4 e-tron crossover based on the Volkswagen ID.4. So what does Q8 mean in the context of the Q8 e-tron? Well, nothing and everything at the same time.

That doesn’t sound very helpful at first, but even though it’s a meaningless moniker in the context of the regular Q8, it signals this electric crossover’s position as the flagship crossover in Audi’s e-tron range. If the company plans on building anything bigger, it’s going to be a Q9, Q10, QThousand, or something like that. Actually, maybe Audi should just drop the Q prefix as it’s a bit embarrassing in the year 2022. Maybe drop e-tron as well, since étron means turd in French.

[Editor’s Note: I think this is fine. Qx e-tron where a bigger number in the “x” position denotes a larger SUV seems fairly straightforward. It doesn’t bother me that there’s a different, ICE-based vehicle=that has the same Qx name minus “e-tron,” though Thomas and I disagree on this. -DT] 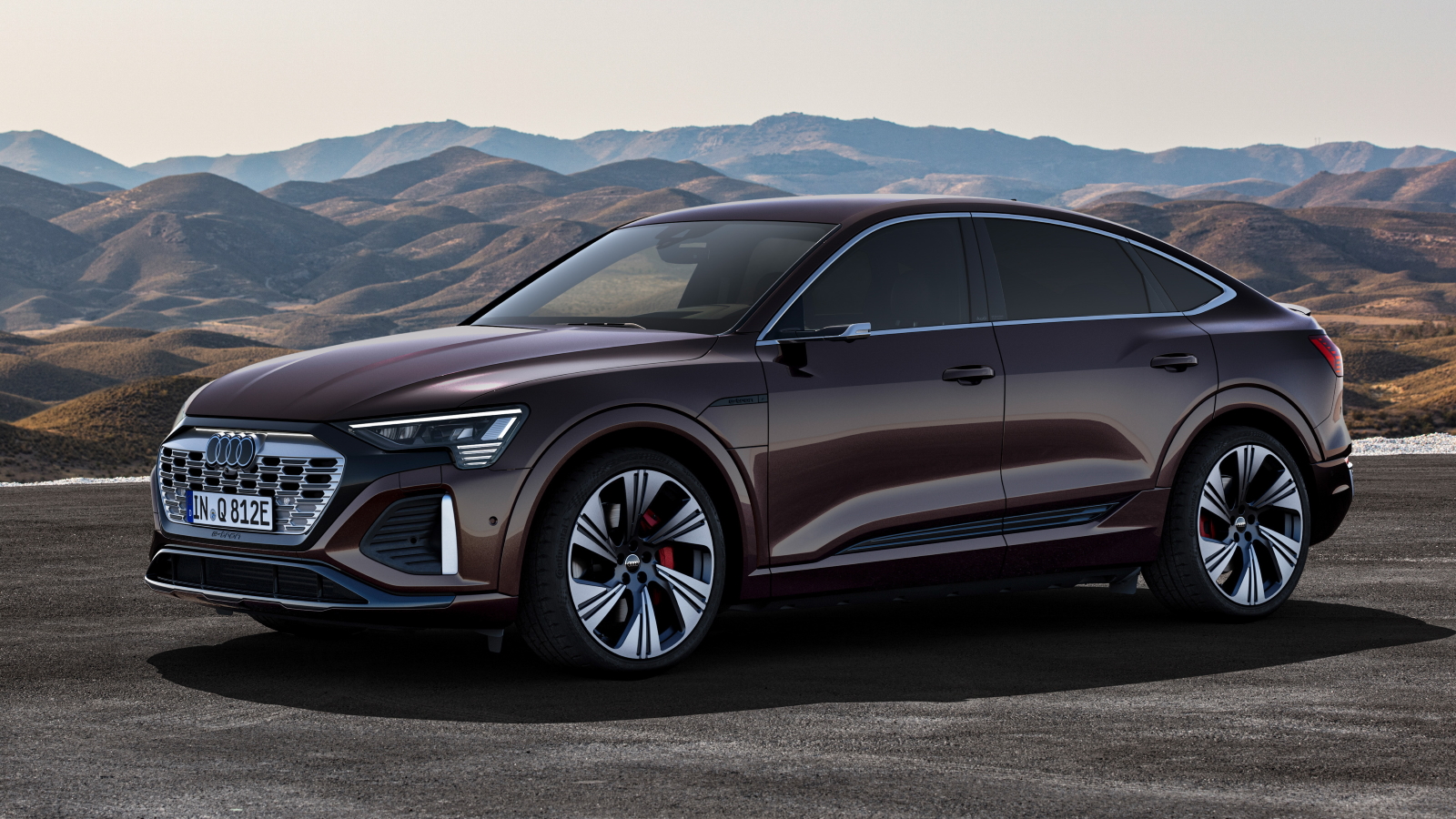 Anyway, what you really need to know is that the Q8 e-tron gets a thorough facelift and an updated powertrain compared to the outgoing e-tron. Let’s kick things off with the sparky bits. While the old e-tron 55 packed a large 95 kWh battery pack, range was a bit disappointing at just 222 miles. How does Audi plan on fixing this shortcoming? Mostly by using an even bigger battery pack.

Despite taking up no more space than the old battery pack, the new one clocks in at 114 kWh thanks to tightly-stacked prismatic cells with revised chemistry. Since simply installing a bigger battery pack is the EV equivalent of breaking out a bigger hammer, Audi’s also packed an extra two coils on the rear motor for increased efficiency. While Audi hasn’t yet released EPA range figures, the Q8 e-tron 55 should see 372.8 miles (600 km) for the Sportback model and 361.6 miles (582 km) for the traditional crossover on the optimistic WLTP cycle. 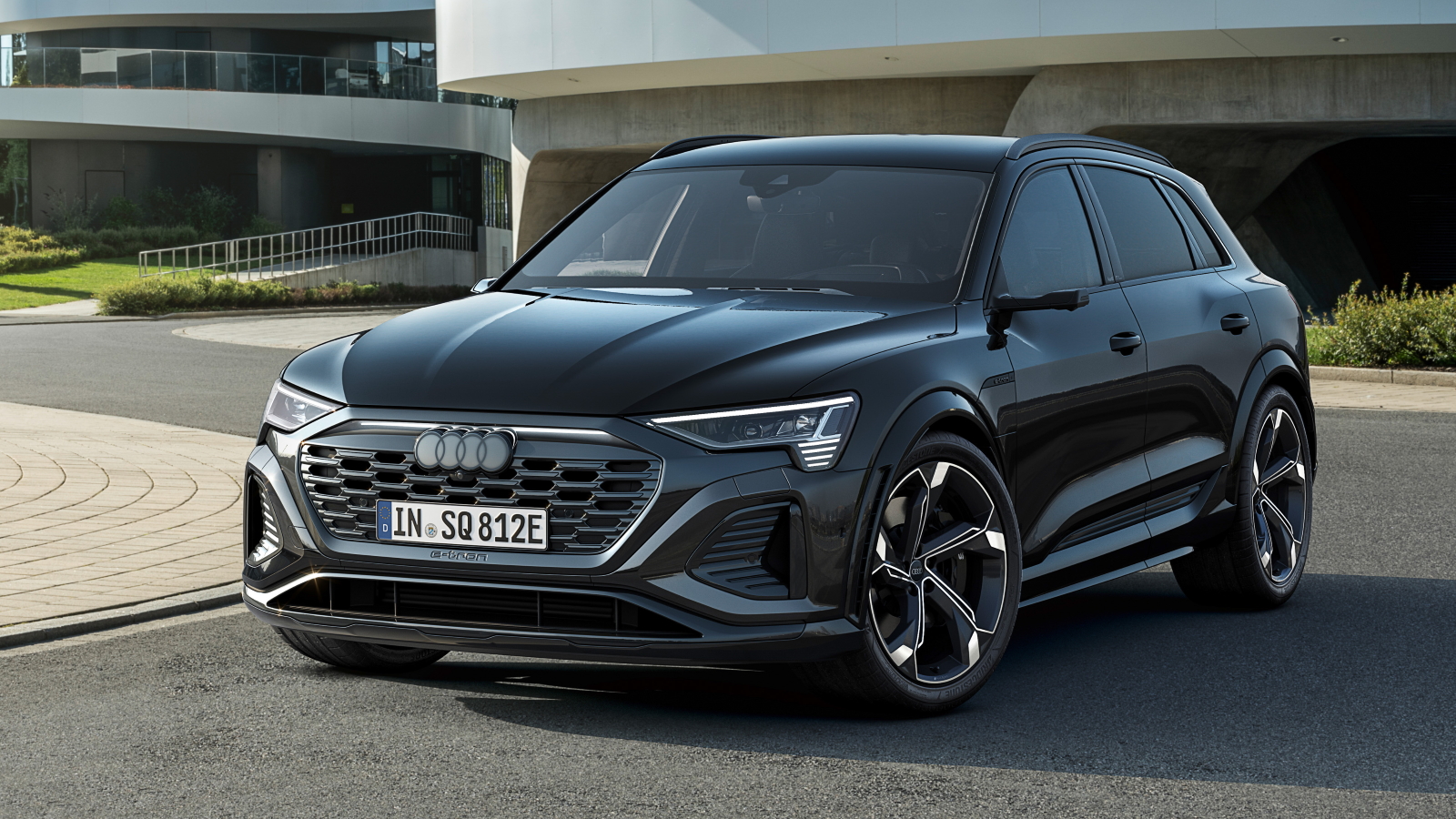 Maybe you’re more interested in speed and power than outright efficiency. No worries, the SQ8 e-tron’s got your back. Instead of a plebeian dual-motor setup, this hi-po hauler packs a 124 kW motor on the front axle and one 98 kW motor for each rear wheel. The result is a strong 496 horsepower and 717 lb.-ft. of torque in boost mode, plus possible torque vectoring benefits. Whether or not possible torque vectoring benefits are realized is entirely up to Audi – the German firm remains tight-lipped on the tri-motor setup.

Regardless of specified gusto, Q8 e-tron models get a bump in charging speed to 170 kW. That’s not lightning-fast compared to what the latest crop of 800-volt architectures are capable of, but so long as the charging curve can cling fairly tightly to that 170 kW peak, it should be quick enough. However, since the battery pack is larger than on the outgoing model, it’s unlikely to translate to faster charging times from 20 percent to 80 percent state-of-charge. In addition to powertrain revisions, the Q8 e-tron also features updated suspension and steering. In addition to air spring recalibration, stiffer front suspension bushings should help drivers make the most out of a new, quicker steering rack. 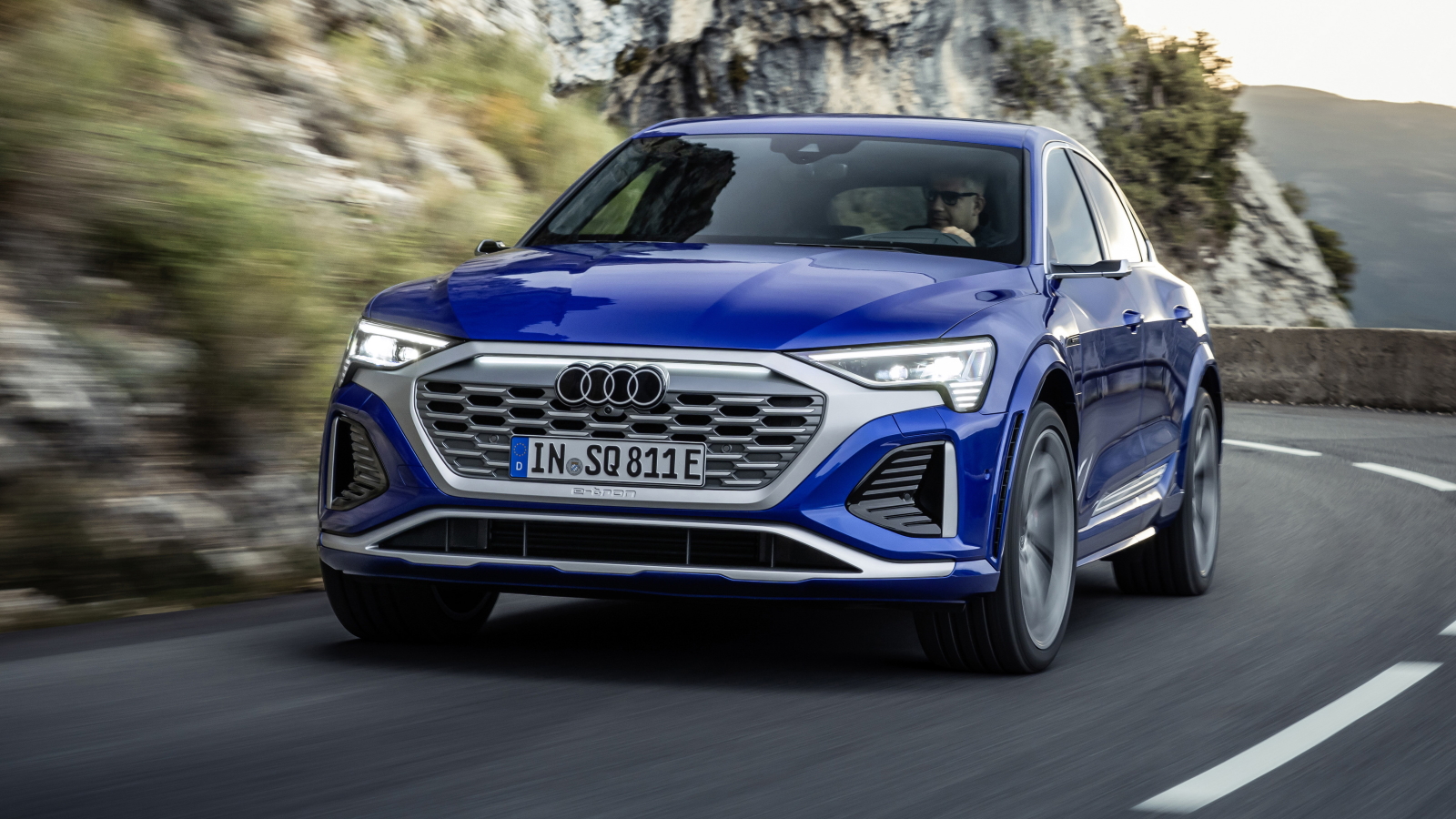 Moving bits dealt with, let’s talk about styling. With the Q8 prefix comes a very Q8-aping front fascia, which is a bit of a problem. The massive contrasting trim panel around the grille makes the front end rather busy and is rather disappointing to see considering the old model’s clean front end. Then again, the heavier bezels around the air curtains add a bit of aggressiveness that helps the Q8 e-tron stand out from its Q5 combustion-powered sibling. You win some, you lose some. Around the back, the Q8 e-tron’s new rear valence is a touch busier than on the outgoing model, yet looks perfectly fine.

In addition to revised fascias, Audi boasts of a few new styling tweaks that seem rather underwhelming.

As a prestigious electric SUV model from Audi, the Q8 e-tron ushers in the new corporate identity with a two-dimensional design of the four rings on the exterior. In order to elevate the family logo as a central element, Audi highlights the vehicle’s face with the projection light Singleframe. Additionally, the Q8 e-tron is the first model to feature the new model badge with Audi lettering on the B-pillar.

Good for you, Audi. You’ve figured out how to order from AliExpress. Alright, so not much change on the outside of the Q8 e-tron. Does the interior pack a bigger punch? Well, it depends on what you mean by punch. On the tech front, things are very much unchanged, but there are some clever uses of recycled materials going on. The insulation and carpeting is made from recycled materials, as is some of the interior trim. That’s not massively innovative, but it’s still nice. However, the little plastic covers on the seat belt buckles are innovative as they’re made entirely from recycled automotive plastics. Your new Audi could be partially made from an old Audi. How cool is that? 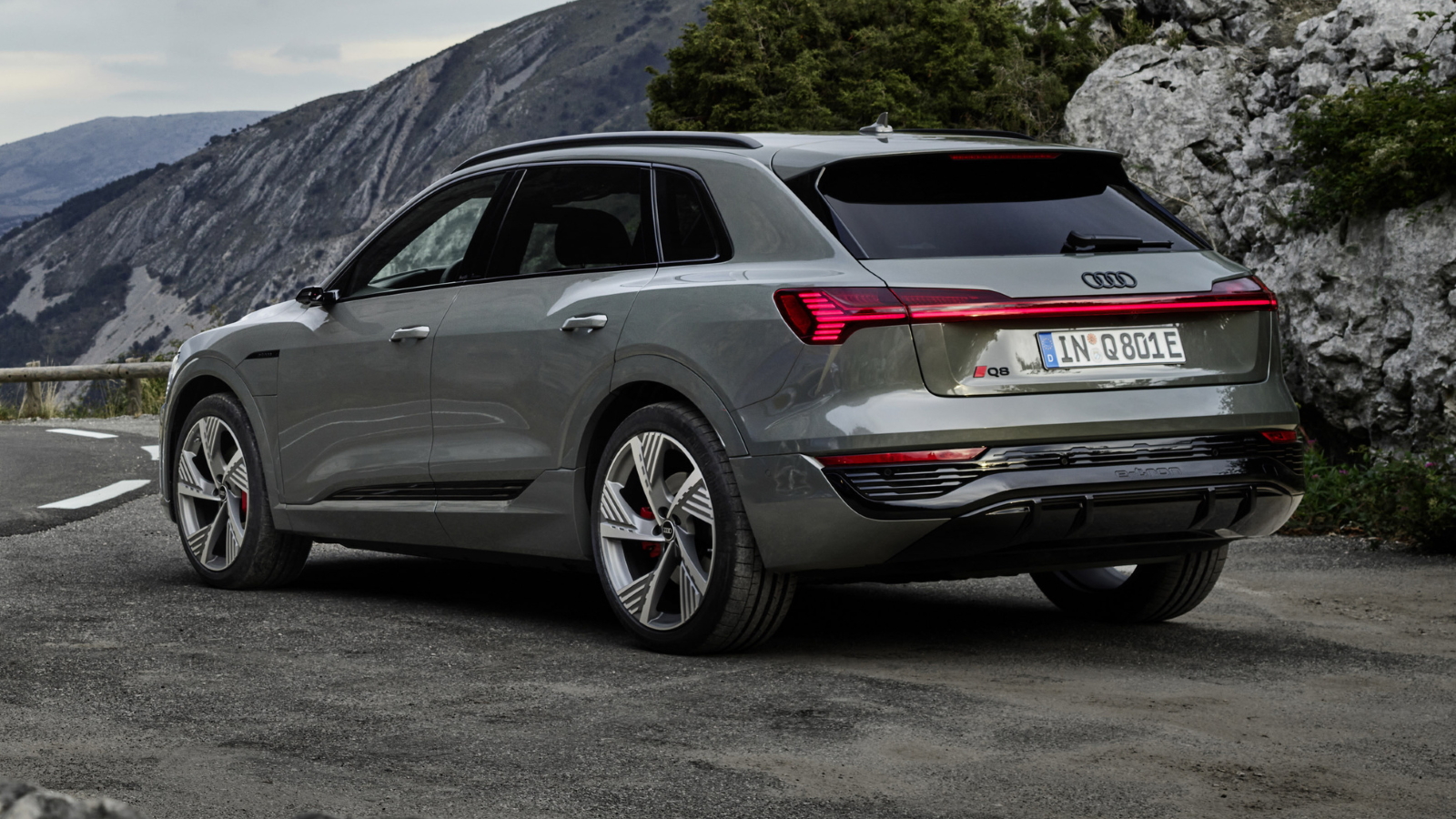 Pricing for the 2023 Audi Q8 e-tron hasn’t been announced yet, so expect more details to arise closer to the crossover’s on-sale date this spring. While the external updates to Audi’s bigger electric crossover aren’t anything to shout from the rooftops, all the little tweaks underneath should add up to a better product than the old e-tron that promises to keep up with the current crop of luxury EV crossovers.

All photos courtesy of Audi

Thomas is a Nu Rave-blaring, heel-toe downshifting, maple syrup-swilling, chassis-geeking, junkyard parts-hauling, floppy-haired scenester who's been writing about cars since college. His current ride is a 2006 BMW 325i with the six-speed manual gearbox. Instagram: @thomas.hundal Twitter: @thomashundal
Read All My Posts »
PrevPreviousThere’s A Gorgeous Corvair Pickup For Sale And It Comes With A Sweet Camper
NextDetroit-Area Autopians: Let’s Go Off-Roading On SaturdayNext