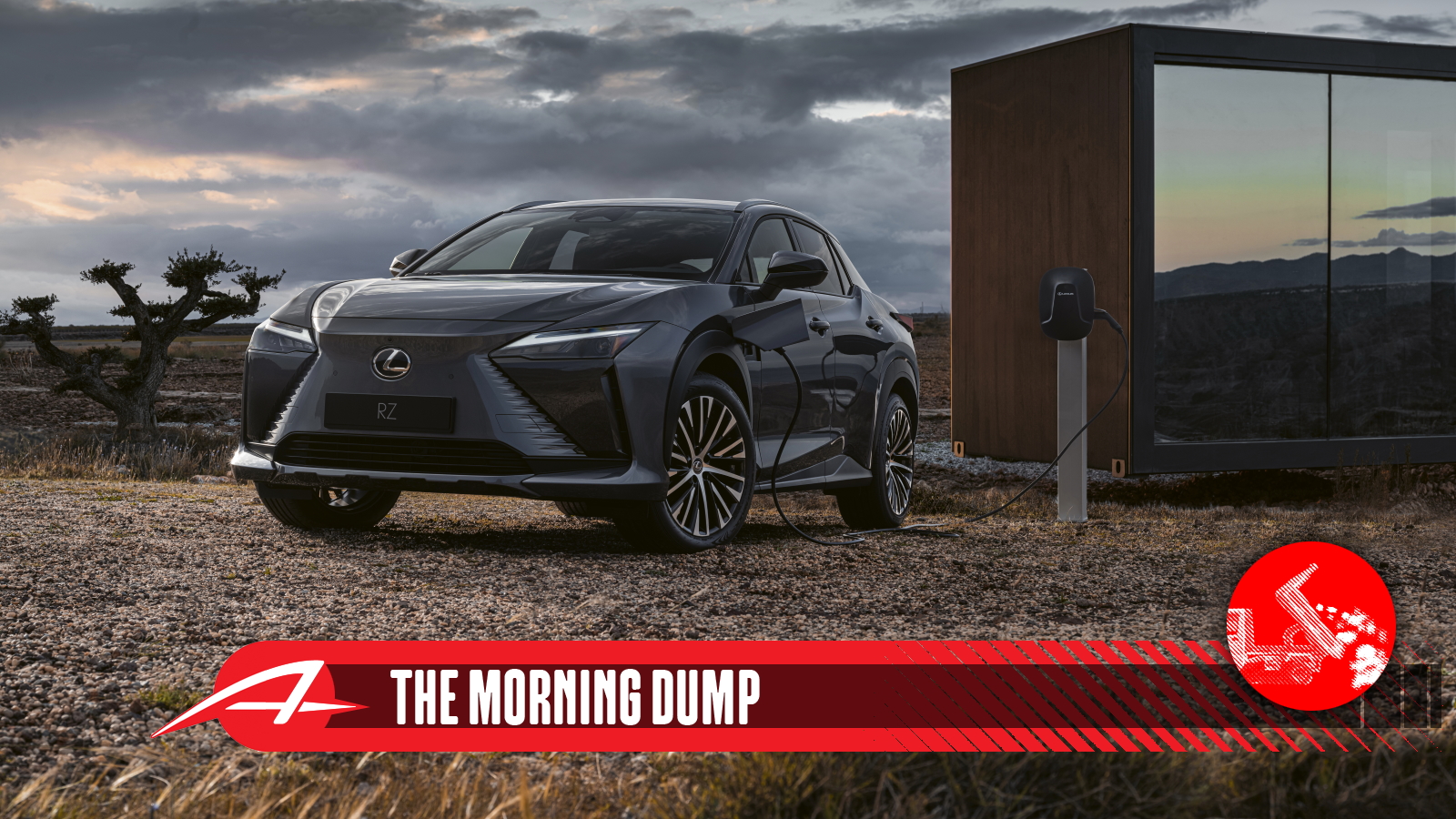 The production-spec Lexus RZ finally shows its face, Audi promises Level 4 autonomy soon, Toyota might launch a new four-cylinder engine. All this and more on today’s issue of The Morning Dump.

The problem with launching a concept car with a production name and styling nearly identical to the production car is that when the production version rolls around, it won’t feel like news. Say hello again to the Lexus RZ 450e, the posh sibling of the Toyota bZ4X compact electric crossover.

So, let’s start with everything that is news about Lexus’ first-ever electric vehicle. In an unusual move, the drivetrain of the RZ 450e is actually bespoke. Two brand-new electric motors from Toyota’s Aisin Corp. crank out 150 kW (201 horsepower) of power at the front and 80 kW (107 horsepower) of power at the back. No other motor options are available, but that should be fine. The new dual-motor setup promises more poke than what’s on offer in the Toyota bZ4X. Of equal importance is the RZ 450e’s battery supplier situation. According to Automotive News, the Toyota bZ4X will get its batteries from Chinese battery producer CATL and the joint venture between Toyota and Panasonic known as Prime Planet Energy & Solutions, but the Lexus RZ 450e will only get batteries from Prime Planet Energy & Solutions.

If there’s one downfall to the Lexus RZ 450e, it’s range. At an estimated 225 miles (360 km), it really isn’t very impressive. However, the RZ 450e only packs a 71.4 kWh battery pack, so it shouldn’t take terribly long to recharge. Now I know that smaller battery packs and good efficiency per kWh of electricity matter, but I believe they won’t truly be important until charging companies can get their acts together. Drivers always seem to be reporting inoperative chargers and chargers blocked by improper snow clearing, and after my experiences with public charging I’d say they’re telling the truth. Still, there is some solace in the RZ’s expected efficiency. An estimated 225 miles of range from a 71.4 kWh battery pack gives it an estimated MPGe score of roughly 106 MPGe. Not bad, Lexus.

On the inside, the RZ thankfully features an all-Lexus dashboard design. The 14-inch touchscreen infotainment screen with integrated knobs for climate controls and stereo volume is the same system used in the new Lexus NX compact luxury crossover SUV. More dramatically, the digital gauge cluster sits much closer to the steering wheel than on its Toyota bZ4X sibling, adding a more traditional feel. While a steer-by-wire steering yoke is available as an option in other markets, it’s not coming to America just yet. Honestly, that’s probably a good thing. Yokes don’t offer an intuitive 360-degree grip and steer-by-wire offers all the linearity of prog-metal chord progressions. The 2023 Lexus RZ 450e will go on sale towards the end of 2022, with pricing to be announced at a later date.

While it’s been fairly thoroughly proven that electric vehicles are cleaner from production to lifespan (“well-to-wheel”) than gasoline-powered cars, the use of rare earth materials in EV production still poses some tricky ethical questions. Mining is hard, dangerous work that can be incredibly destructive without proper environmental measures in place. Just ask a former coal miner how working the mines has been to their body. While rare earth materials aren’t used extensively in EVs, they do end up in key components like brushless electric motors. Now, brushless motors aren’t the only solution – BMW is making use of brushed motors in their iX electric SUV – but permanent magnet motors are the industry standard and will likely continue to be widely-used for decades to come.

So how on earth do we ethically source rare earth materials for motors and whatnot? Good news, electric car component maker Schaeffler has just inked a deal to source rare earth materials from Norway starting in 2024. According to Reuters, this is the first reported deal for a European parts manufacturer to source rare earth materials from within Europe. Not only is this positive from a social perspective, it also should cut down on shipping emissions. So long as these materials can be refined and made into motors within Europe, supply chain greenhouse gas impact should be greatly reduced for these components. Look, I’m as much of a dino juice fan as anyone. I don’t believe that a 2035 EV mandate is realistic and I won’t ever be giving up my combustion-powered cars, no matter how high fuel prices climb. However, I’m also in my early 20s, I’d definitely consider a nice used or cheap new EV as a daily driver, and some level of climate change mitigation sounds nice. Local sourcing of rare earth materials for electric motor production may be a small step, but small steps all add up.

Audi debuted a concept vehicle called the Urbansphere the other day. It’s a big, van-like electric vehicle designed for the Chinese market. While I have no doubt it would make slogging through gridlock wonderfully relaxing, the biggest part of that relaxation is SAE Level 4 autonomy, something Audi claims they’ll bring to production in just four short years. That’s quite ambitious, yeah?

Speaking with Automotive News yesterday, Audi said that customers will be able to buy a model with Level 4 autonomous capability in 2026. What is Level 4 autonomy? Put simply, a Level 4 autonomous car will actually drive itself under limited conditions and not require to take control so long as those conditions are met. It’s a huge step forward from Level 3 autonomy, which is autonomous under certain conditions but may prompt the driver to take control of the vehicle, and Level 2 autonomy, which is really just a driver assist suite. To achieve the goal of Level 4 autonomy by 2026, Audi has tapped Volkswagen Group’s internal software company, CARIAD. That’s right, Audi’s walking the road to autonomy without outside software partners. Honestly, I can’t wait to see how Audi implements Level 4 autonomy and if it’s actually available for customer use in 2026.

Despite almost every transportation news article these days seemingly about electrification and autonomy, the gasoline-powered engine isn’t going to disappear any time soon. Automotive News is reporting that Toyota will invest $383 million dollars in production of a new four-cylinder engine. Wait a second, didn’t Toyota recently launch a new four-banger? Why would they need a new one?

It’s true, the M20A-FKS two-liter four-cylinder engine in the current Corolla launched just four years ago. Moreover, that engine architecture only goes back five years to 2017, debuting in the current-generation Camry mid-sized sedan. However, technology can evolve and if the public wants more four-cylinder engines, the public will get them. That big $383 million dollar investment breaks down as follows: $222 million to add another four-cylinder production line at Toyota Motor Manufacturing Alabama, $109 million to build new cylinder heads at Toyota Motor Manufacturing, Missouri, and $16 million to enhance flexibility at Toyota Motor Manufacturing Kentucky. It’s a lot of money to potentially be throwing at a new internal combustion engine, but Toyota seems confident that customers will be fueling most cars with gasoline for years to come.

Whelp, time to drop the lid on today’s edition of The Morning Dump. You know, this news from Audi begs a question. Does anyone actually want Level 4 autonomy? According to a recent study from the industry analysts at AutoPacific, people seem to be quite uncomfortable both in and around autonomous vehicles. We’re not just talking about a possibility of motion sickness, we’re talking about concerns around pedestrian safety, crash avoidance and simply sharing the road with autonomous vehicles. I’d love to hear your thoughts on autonomy, including if you feel comfortable sharing the road with autonomous cars.

Thomas is a Nu Rave-blaring, heel-toe downshifting, maple syrup-swilling, chassis-geeking, junkyard parts-hauling, floppy-haired scenester who's been writing about cars since college. His current ride is a 2006 BMW 325i with the six-speed manual gearbox. Instagram: @thomas.hundal Twitter: @thomashundal
Read All My Posts »
PrevPreviousHere’s What You Need To Know About BMW Isetta Taillights And Wipers To Join The Exclusive Taillight Community
NextHere’s What Happens When An Ex-Formula E Engineer And His Friend Get Their Hands On An Audi TT, A Kit Car, And A WelderNext