Facebook-f Twitter Instagram Rss
Menu
Menu
Home » Here’s What Happens When An Ex-Formula E Engineer And His Friend Get Their Hands On An Audi TT, A Kit Car, And A Welder

Here’s What Happens When An Ex-Formula E Engineer And His Friend Get Their Hands On An Audi TT, A Kit Car, And A Welder 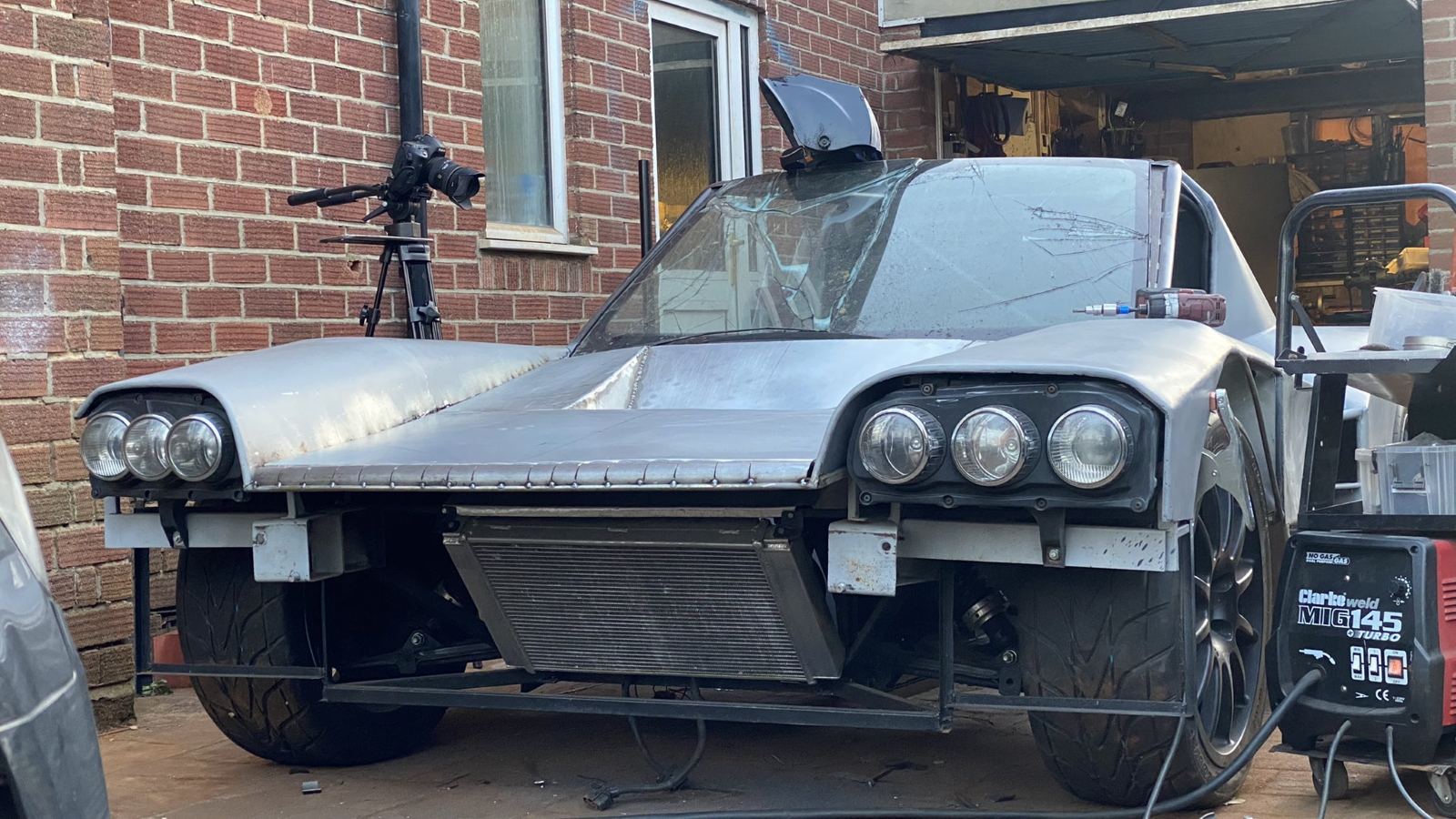 Chris Rimmer is a genius. The UK-based Formula E engineer-turned-programmer is currently working on a Rover SD1 project and a 1966 Ford Thunderbird, and yet neither of these projects hold a candle to the sheer insanity of the mid-engined Audi TT sports car he’s co-building with his friend Adrian “Ade” Gordon.

Wait, back up. A mid-engined Audi TT sports car? Well, yes, kind-of. The chassis started life from blueprints provided by a Haynes manual called Build Your Own Sports Car: On a Budget. Now, I happen to have a copy of that book and the sports car it instructs readers to build is about as far from mid-engined as a water buffalo is from an F-35 fighter jet. It’s supposed to be this Ford Sierra-based Lotus Seven clone, the sort of thing designed for puttering about the Cotswolds. Chris and Ade didn’t want to simply putter about the Cotswolds looking like Patrick McGoohan, so after obtaining the chassis, the two friends decided to slice it up a bit.

It turns out that slicing the chassis up was a good idea. Chris mused, “We sort of assumed the folks who built the frame originally were more competent than us, which seemed a good assumption given how low we’d set the bar!” Good assumption, but nevertheless an optimistic one. “…the left and right sides of the frame were about 2 cm different in length to each other. The whole thing was wonky in every dimension we checked, and surely in several we didn’t,” said Chris. I’m sure the chief engineer of the Renault 4 would’ve signed off on it, but such sloppy work wasn’t good enough for Chris and Ade.

First with flux core and then with gas, Chris and Ade slowly reworked the chassis into something more their speed. The 225-horsepower 1.8T 20-valve turbo powertrain from a Mk1 Audi TT was obtained for everyone’s favorite price of free, with plans made to slot it into the back of the kit car. I don’t know about you, but 225 mid-engined horsepower in a very light sports car sounds like an absolute riot.

To get the Audi lump back there, the entire back half of the chassis had to be reworked. New chassis rails were welded in place to cradle the turbocharged four-cylinder engine while new turrets for the rear dampers were fabricated around Subaru Forester top mounts. Why Forester top mounts? They were the ones sitting on the workbench, of course! In fact, the only things remaining from the TT are the engine and a handful of suspension bits. The Audi’s trailing arms play a big role in keeping the rear end reasonably planted, while the front suspension is even more ingenious.

“We cheated on the front,” said Chris. “We re-used the Audi lower arm, and made an insert for the top of the hub to take an upper A-arm rather than the bottom of a MacPherson strut tube.” Honestly, that sounds more like brilliance than cheating to me.

With the engine situated firmly midship, it was time to Chris and Ade to turn their attention to plumbing and wiring. The cooling lines for the car come from an MG TF, a very sensible choice. The sports car’s intercooler is off of a Land Rover Freelander. Clever stuff. As for engine management, Chris is likely sticking with the standard Audi ECU for now. While a Megasquirt 3 engine management system is on hand, it’ll likely be reserved for a different project. “I might keep that for my Rover K Series-swapped Mk1 Golf,” said Chris.

I responded to this comment about how that should make for a really fizzy little hatchback, and Chris said, “Especially when said hatchback is a speedster. But that’s another story.” Christ on a bike, that’s going to be hot.

As for bodywork, Chris and Ade’s budget sports car doesn’t look anything like a Lotus Seven, nor like anything I’ve ever seen. There’s a hint of Jaguar XJS to the front, wide Alfa Romeo 159 headlamps set into even wider fenders. The hood features an enormous scoop to extract air from the radiator, side pods bulge from the rear fenders and a full roll cage is welded into the car’s structure for safety. No cocking about here. Around the back, two round Alfa Romeo MiTo taillights look absolutely fabulous while a big mesh grille clears air through the aforementioned intercooler. The rear combination fog and reverse lamp is off a modern Mini, while a Toyobaru muffler’s exhaust tips look like a pair of cannons given the car’s truly small size.

While the spirit of this project is cheap and DIY, it does pack a couple of necessary extravagances. A proper pedal box and fuel cell are safety-critical items that were a good idea to splash out on. Chris reckons, “One of them was three hundred odd quid and the other about two hundred, and there’s a solid chance they cost more than pretty much the whole rest of the car.” Fair play. I wouldn’t want to go up in a high-octane fireball or have my pedals take a short but terrifying walk away from their intended positions either.

Considering the bonkers concept of slotting an Audi 1.8T behind the seats of a car never designed to be mid-engined, you’d really think that Chris and Ade had planned this build out from the very start. The truth is, the wrench-happy duo are simply out here winging it.

“I remember reading a while ago about a bloke called Charlie Broomfield who wedged a Rolls-Royce Meteor tank engine into a Rover SD1. He was on the hunt for a steering rack, and the first one he found in a scrap yard that looked right would have to be mounted upside down to fit. So on that day, the car became left hand drive. I think that kind of ethos is alive and well in this project,” said Chris.

Perhaps best of all, Chris and Ade have documented the whole project on their YouTube channel called PedalBox. Their videos are genuinely brilliant and I urge you to check them out. Personally, I can’t wait to see Chris and Ade giving their homebuilt “kit car” a bit of a thrashing. A homebuilt mid-engined sports car on the cheap. What’s not to love?

Thomas is a Nu Rave-blaring, heel-toe downshifting, maple syrup-swilling, chassis-geeking, junkyard parts-hauling, floppy-haired scenester who's been writing about cars since college. His current ride is a 2006 BMW 325i with the six-speed manual gearbox. Instagram: @thomas.hundal Twitter: @thomashundal
Read All My Posts »
PrevPreviousThe 2023 Lexus RZ 450e Is The First Electric Lexus. Let’s Take A Look
NextIs The $1,200 Beat-To-Death Pontiac Grand Am For Sale In Every Town Worth It? I Found Out.Next