I know the Porsche 914 is often derided–I think unfairly–by Porsche purists as being somehow unworthy of the elevated status that comes with having that Porsche badge adhesive’d onto the body. But part of the blame for this is on Porsche itself, who, via a combination of penny-pinching and insecurity, cast the 914 in suspect light from the get-go. There’s really no better place to see this than on the wheels used on the 914, which came from what was literally one of the cheapest cars you could buy at the time.

Personally, I kind of love that Porsche did that. The wheels are, in a purely rational sense, just fine for the job. But, what makes this all so fascinating to me is just how deliriously unacceptable this would be today, which is sort of the theme of this occasional series we’re starting here, called Phoning It In.

Phoning It In will be about the amazing ways that carmakers have half-assed any number of things. We’ll be looking at stunning examples of not-give-a-shittery through modern eyes, and just revelling in the knowledge that, at one time, these sorts of things were thought to be acceptable.

It’ll be fun. You’ll see. (And if you have any examples, email them to me at jason@autopian.com).

Anyway, to really appreciate today’s phone-in job, we need to give a brief primer on the Porsche 914 and why it existed.

The 914 came about because of an interesting intersection between two sorta-related companies, Volkswagen and Porsche. VW was, of course, a mass-market, affordable car maker, and Porsche was a builder of exclusive, premium sports cars. But the circles in the Venn diagram of the two companies had a small bit of overlap, where VW had its premium, top-of-the-line sports car offering, and where Porsche had its entry-level, base car.

For VW the car was the Type 3 Ghia, and for Porsche the car was the 912. The 912 was a 911 with the smaller four-cylinder engine carried over from the 356 instead of the newer flat-six on the full 911, making it Porsche’s cheapest car.

The VW Type 3 Ghia, also called the Type 34 Ghia, used the midrange Type 3 platform and flat-four engine, but with a unique and handsome body designed by Italian styling/coachbuilding company Ghia, similar to how the Type 1 Karmann Ghia was a Beetle with a prettier outfit.

Both of these cars were on their way out; since VW had a contract with Porsche from way back to handle some engineering work, it made sense for both companies to develop one car that covered both niches: a top of the line halo car for VW and a cheap way to get into something from Stuttgart’s most legendary sportscar maker.

The result of this joint effort was the Porsche 914. In Europe, there was some interesting, arguably more honest, branding of the car as a VW-Porsche 914, but here in America, it was just sold as a Porsche — no brand qualifiers at all.

The basic 914 was developed by Porsche but used plenty of VW components, including some switchgear and, significantly, the new Type 4 engine — though there was a potent and uncommon Porsche variant with the 911’s flat-six, too.

Okay, so, by 1969 the 914 was released, and, at least in America, it was badged and sold as a Porsche. Here’s where we get to the part that I find fascinating, and, when viewed from the perspective of modern Porsche, baffling.

These were the base wheels the car came with: 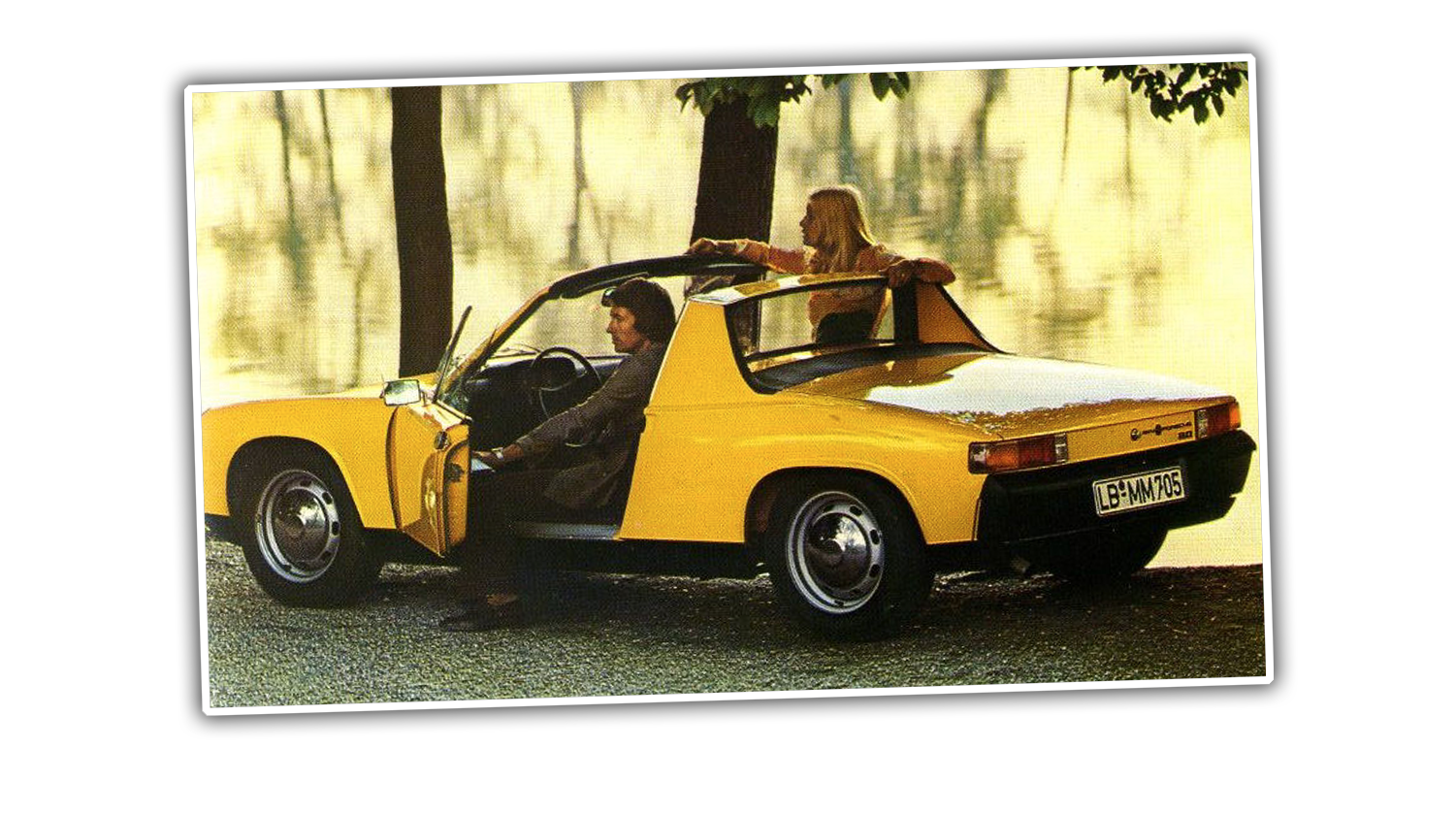 They’re not so bad, right? They’re clean, simple…maybe a little strangely simple. And kind of familiar. 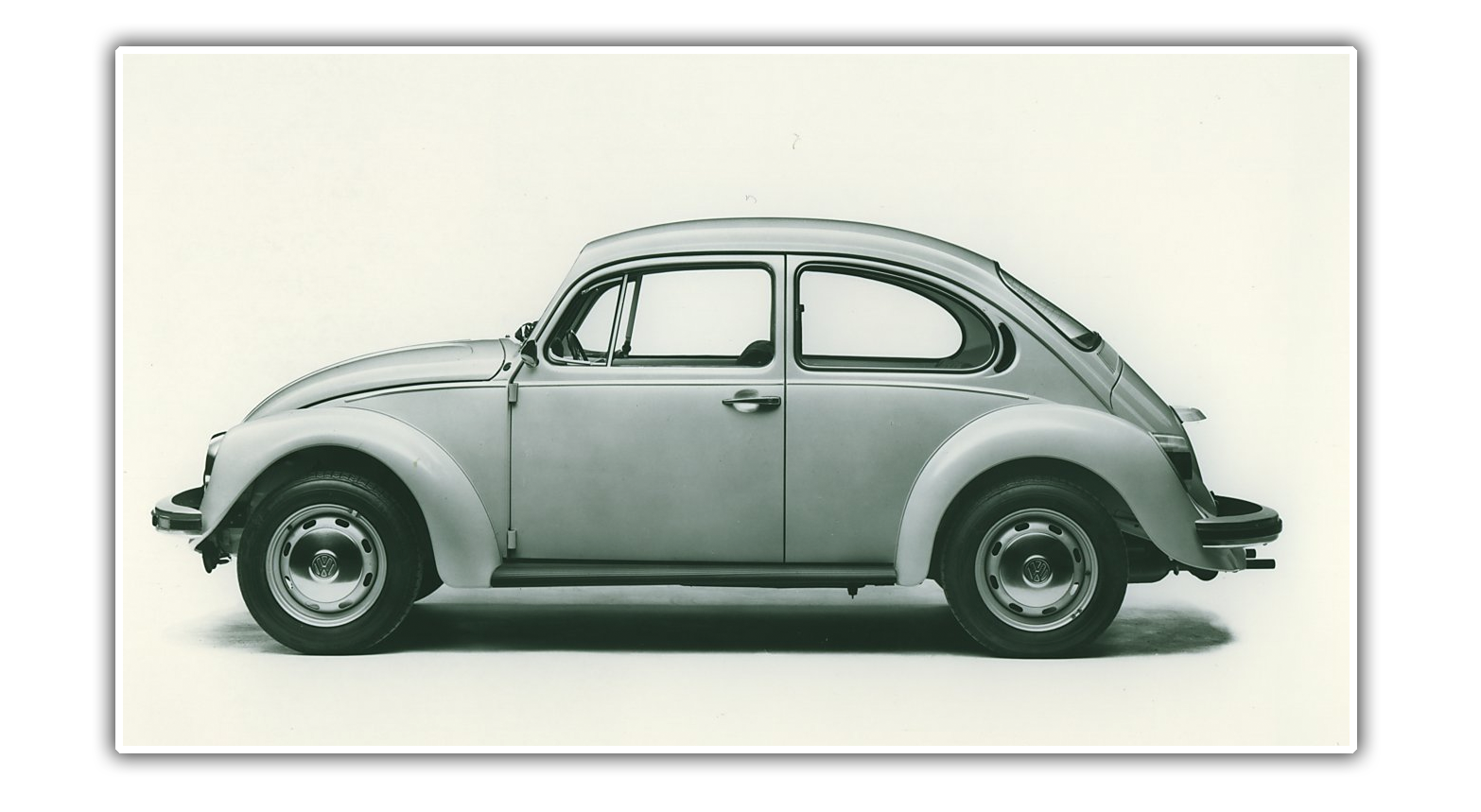 They were familiar because they were the exact same wheels and hubcaps that Volkswagen had been using on Beetles—really, almost all its cars—since 1968, when this particular four-lug steel wheel with hubcap design was introduced.

They weren’t exactly the same, though. If you look closely, you can see one notable difference: 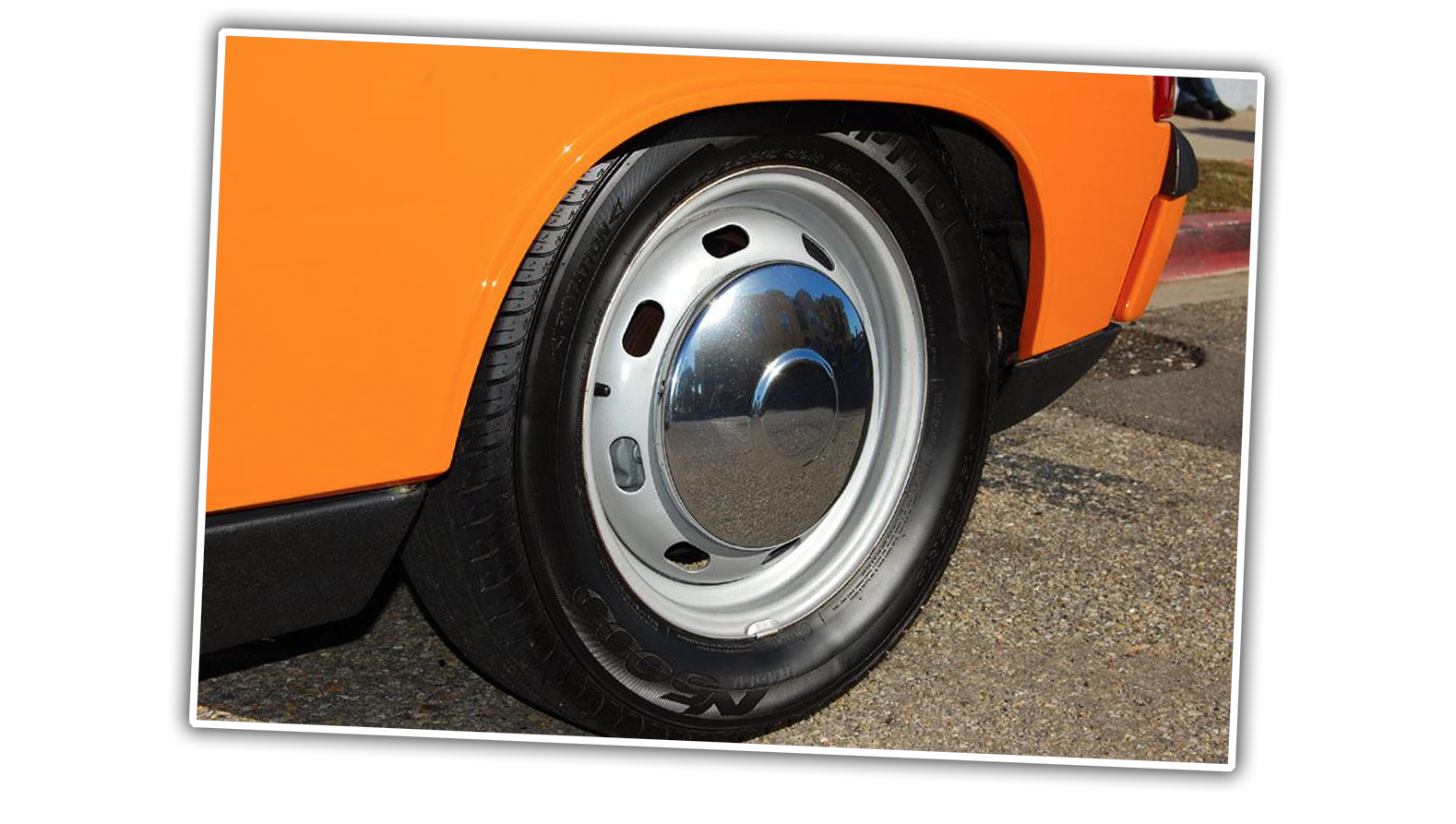 Yes, no VW logo! Because, of course, this is a Porsch-uhhhh, not some common, cheap-ass VW! And, as a result of that Porsche decided to give the 914 a fitting wheel: one from one of the absolute cheapest cars you could buy on the US market, just, you know, with less work put into it.

It’s not so much the basic wheel design that amazes me, it’s the choices Porsche made with the hubcap. Would it have killed them to put the Porsche badge on there? Stamp it in, at least? Do, you know, anything?

The aftermarket has been making such hubcaps for years and years, so we know there’s no technical reason that somehow a Porsche badge couldn’t be put on these: 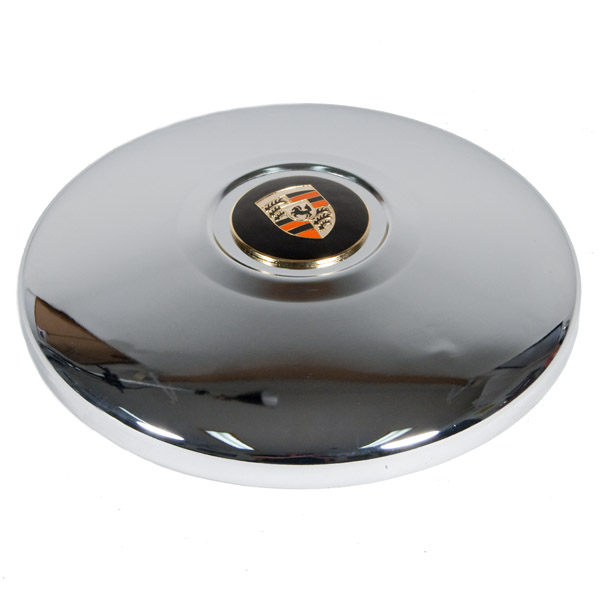 It’s possible, via some black magic known as “sticking it on there,” so I’m pretty sure Porsche could have figured it out, and I bet it wouldn’t even have jacked up the price that much.

There’s something about the obviousness of the borrowing and the incredibly brazen half-assed attempt to hide it by eliminating the stamped logo. It’s somehow worse without the logo, as it feels even more generic, like someone shot them with that advanced ray they use for insurance ads to de-identify a car.

In the 914’s first year, 1969, the car cost $3,595 for the base model. A 1969 Beetle only cost $1,799. Literally half the cost of the car, and they came with visually the same wheels. Maybe no one cared back then? I can find effectively no period-era criticisms directly about this, but today, even for an entry-level Porsche, this would be absolutely impossible to imagine.

Just think if the base model Boxster came with the same wheels used by the Mitsubishi Mirage, but it was okay because Porsche had them leave the Mitsubishi logo off when they ordered them. See? It’s fine!

Nobody would be okay with that today.

Porsche later used VW’s sportier steel wheels from 1974 to 1976, and these were still ones used on cheap Beetles, but they did look a bit slicker: 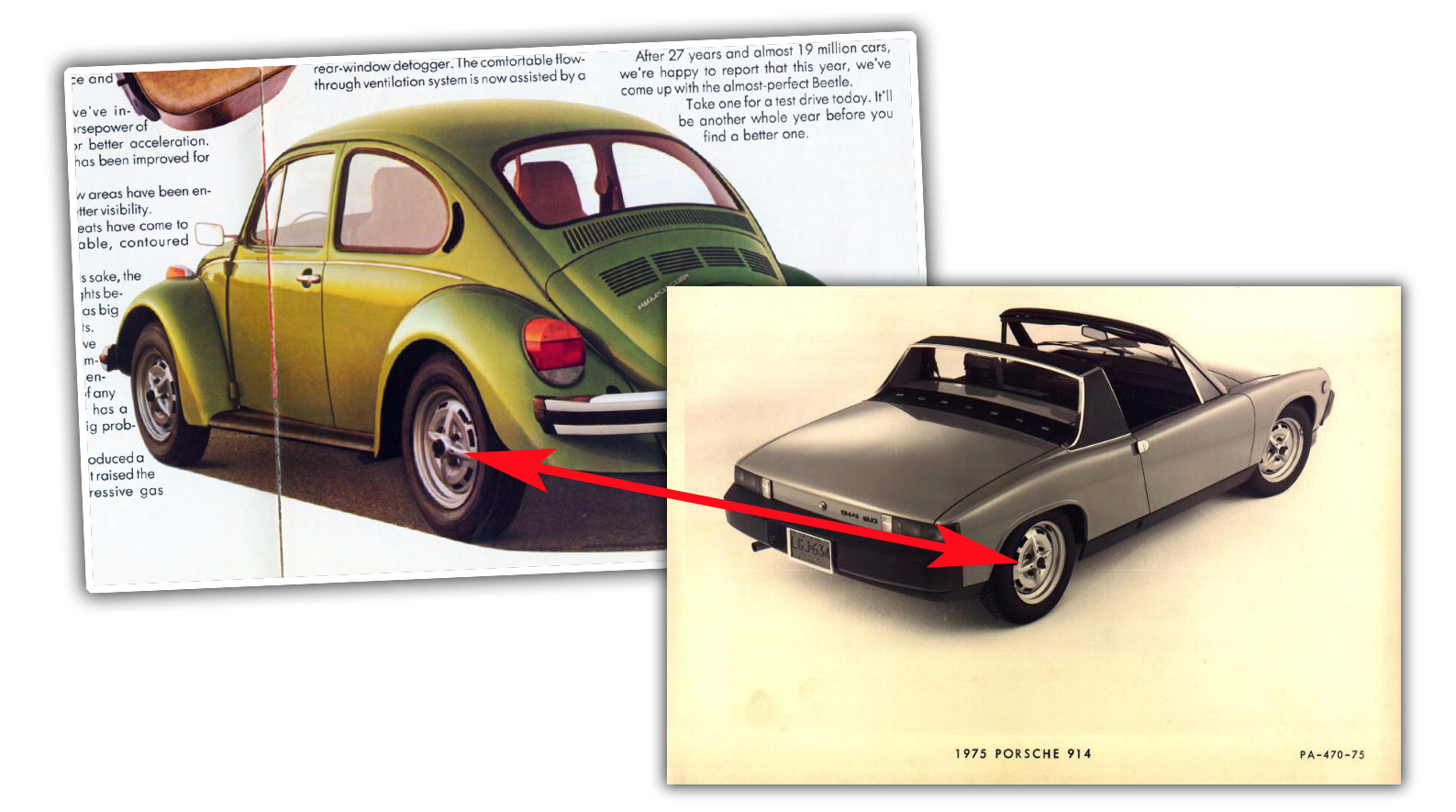 Of course, there were many, many other wheel options for 914s, so if you wanted to spend a little extra and be a big shot, you could have a Porsche without four very obvious parts from the world’s most famous economy car.

If I had a 914, I would absolutely want the generificated-Beetle hubcap wheels. Because it’s an artifact of a time that will absolutely never come again, and this kind of forgotten half-assery needs to be cherished.

I'm a co-founder of the Autopian, the site you're on RIGHT NOW! I'm here to talk to you about taillights until you cry and beg me to stop, which I absolutely will not. Sorry. Hug? Also, David's friend.
Read All My Posts »
PrevPreviousYou Know Things Are Bad When Honda Starts Selling Decade-Old High-Mileage Cars as Certified Pre-Owned
NextI Found A Coveted Pontiac Aztek Center Console/Cooler In A Junkyard. Using It Was An IQ TestNext