I Found A Coveted Pontiac Aztek Center Console/Cooler In A Junkyard. Using It Was An IQ Test 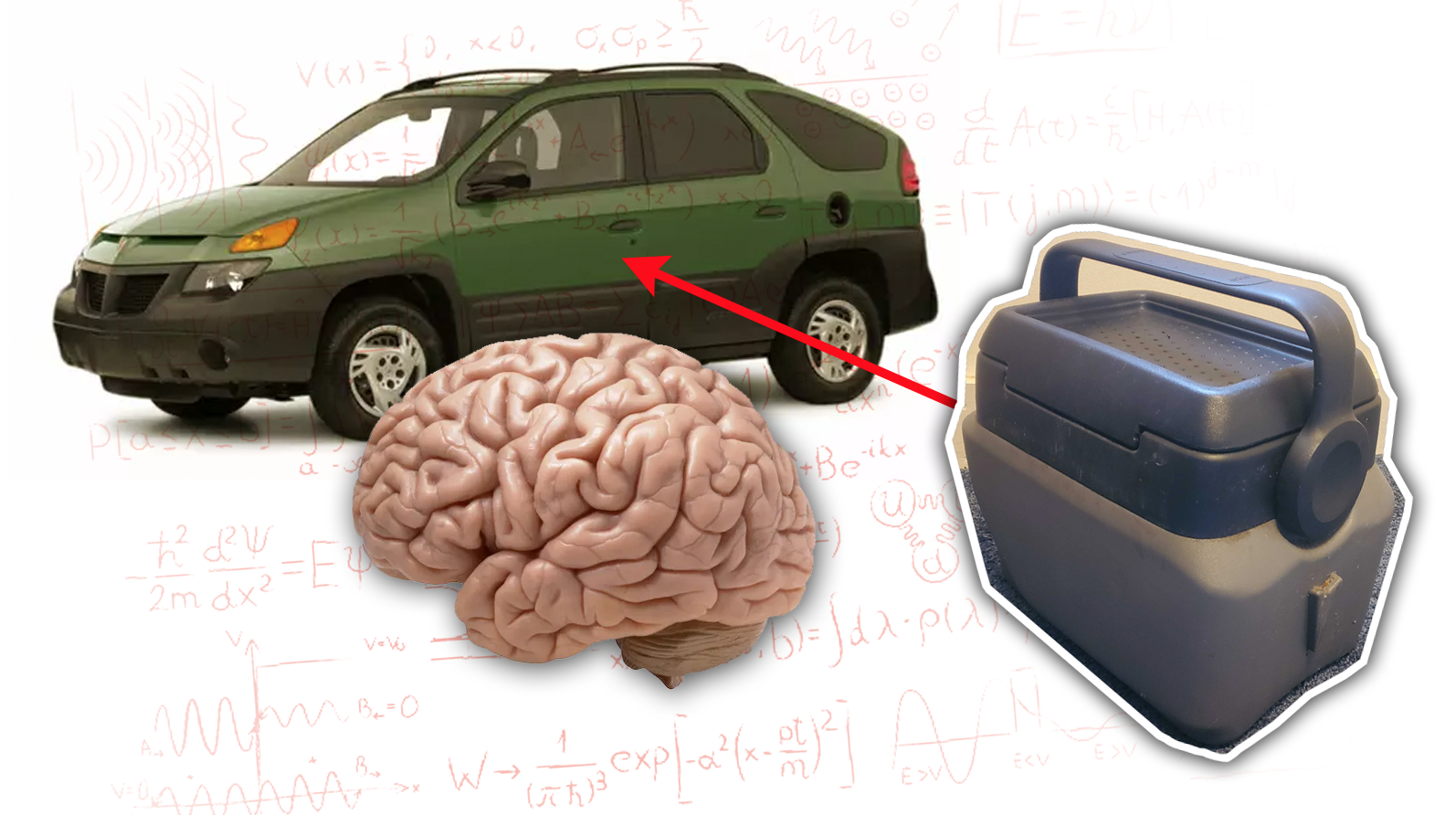 I did it, folks. I managed to snag the holy grail of junkyard treasures — a Pontiac Aztek center console/cooler. This rectangular prism that acts as both a CD-storing center console and a mobile beer-storing cooler represents the pinnacle of General Motors engineering prowess, and today I attempted to ascertain whether my feeble mind was capable of unlocking its brilliance. The Result? It was not. At least not initially, because the Aztek cooler is far more complex than you might think.

Marie Curie, Albert Einstein, Sir Isaac Newton, Antoine Lavoisier — these are some of the most brilliant minds in human history, and yet exactly zero of them were able to invent the Pontiac Aztek center console/cooler; if that doesn’t prove just how state-of-the-art GM’s contraption is, I don’t know what will.

The device is in high demand, often sought out by researchers in military labs around the world, which is why I was shocked to find one at my local junkyard just sitting on an Aztek’s passenger’s seat, unlatched from its snug hold between the hideous SUV’s front captains’ chairs:

As the console/cooler’s complexity is well-documented, I knew better than to touch it without first familiarizing myself with its function. After calling a few astrophysicist friends, I pulled up the Pontiac Aztek owner’s manual on my phone, and slowly reached my hand for the cooler, which has the terms “Latch” and “Loquet” molded in. Yes, GM felt the need to include the French term for “latch” on the handle; rumor has it that the French — universally recognized as leaders in the area of picnicking — may have had a hand in this device’s development.

I felt a slight electrical tingling when my hand made contact with the cooler, confirming my suspicion that there was some sort of electrical generator at work — possibly one involving cold fusion, though maybe the tingling was just nerves. It’s hard to know definitely, because I was concerned that I would be in over my head, mentally. That I’d overtax my neurons and suffer a psychological breakdown right there in that junkyard in what would be a rather fitting place for my demise. 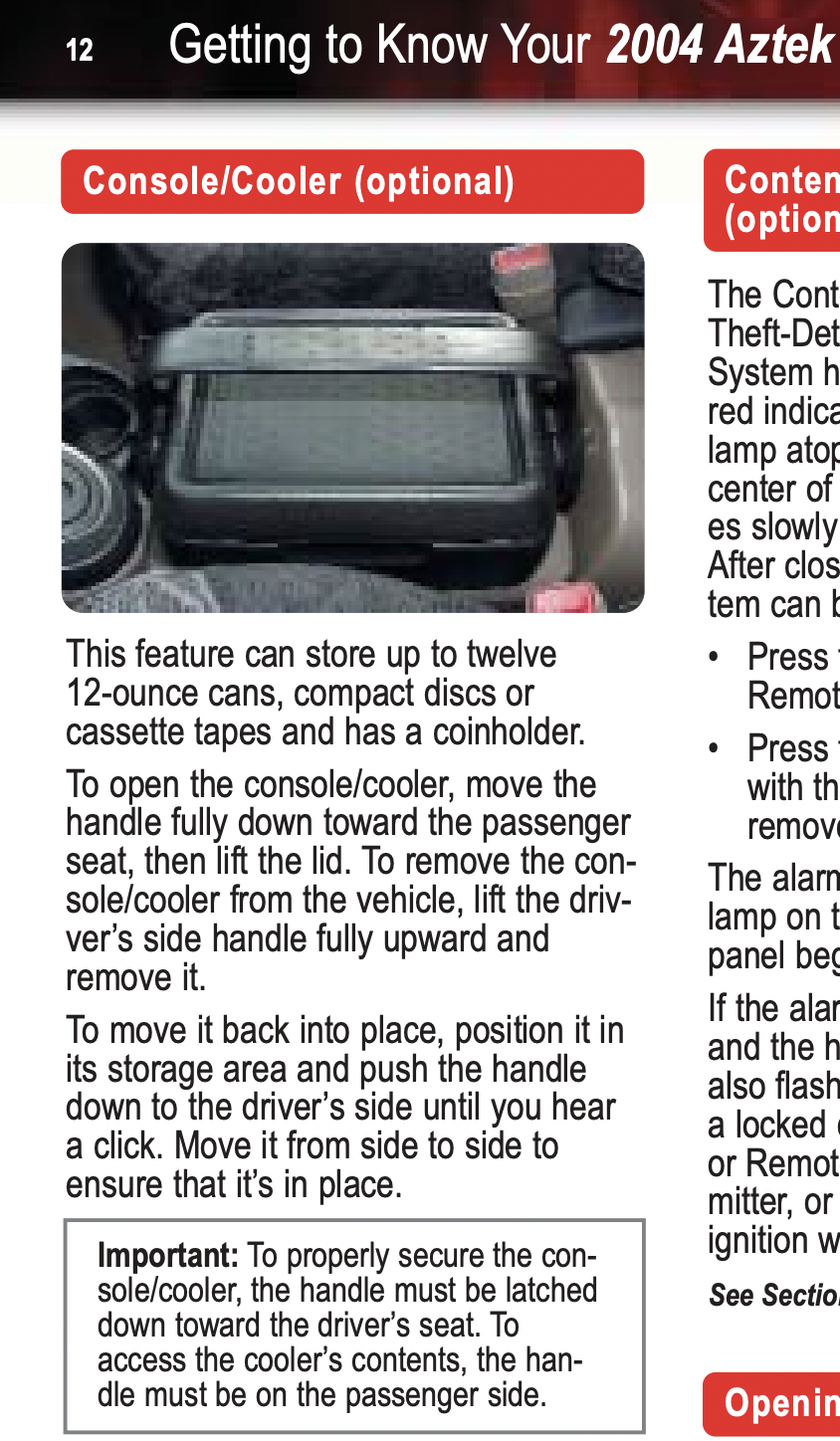 As you can see in the owner’s manual above, the way the console/cooler works is, you keep the handle pointing straight up, then drop the box between the two front seats. To latch the now-console into place, you simply pull the handle toward the driver’s seat and listen for a click. To open the console, you push the handle towards the passenger’s seat, revealing the proprietary rubber CD/coin storage device inside: 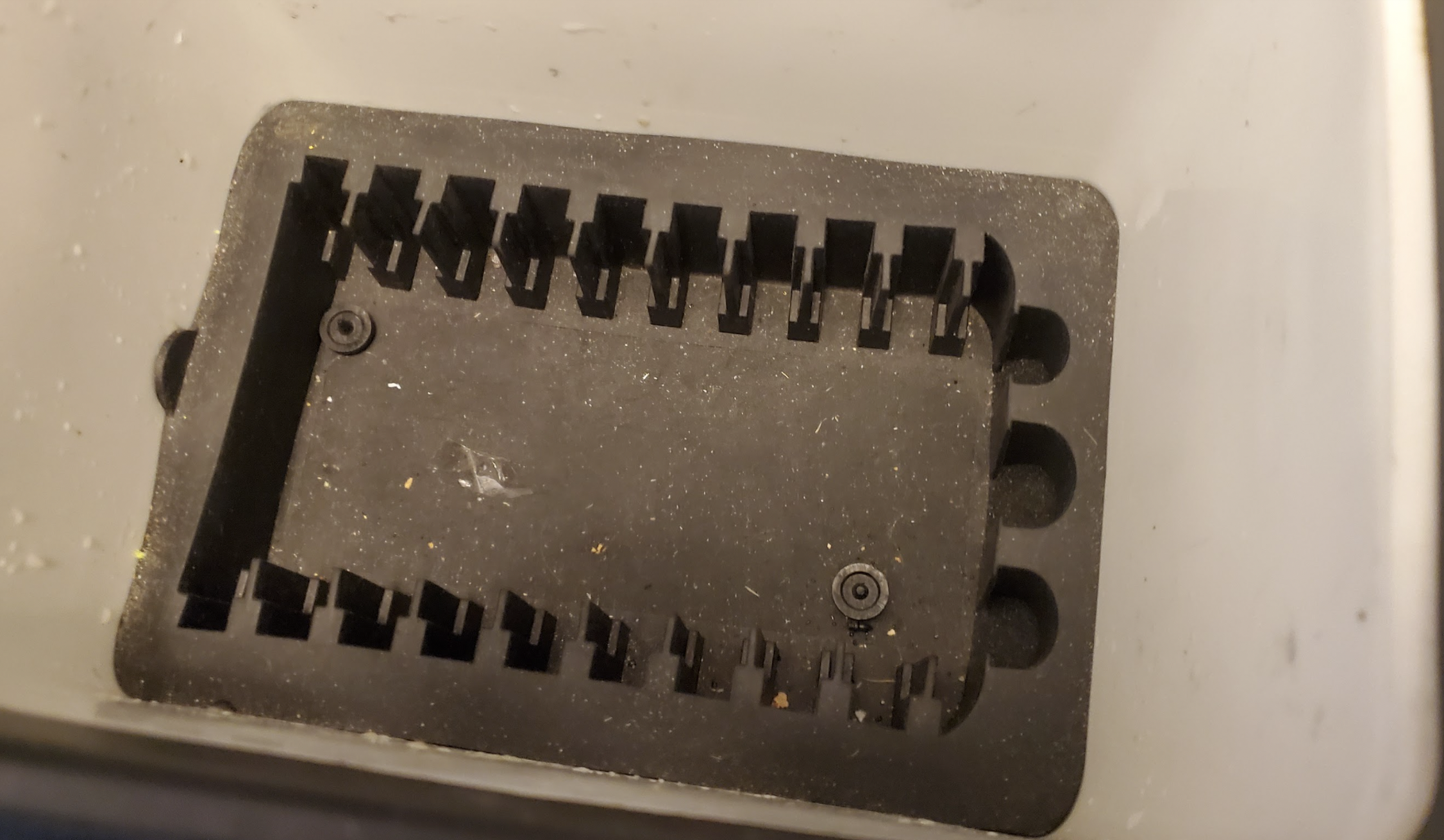 To remove the console and make it a mobile cooler, you move the handle to the center, and lift the device straight up. Changing the glorious chilling/compact disc-carrying device from cooler to console and back took me a few tries to understand, but — luckily, and with my heart pounding out of my chest — I managed, as you can see in the video clip above.

But that was the easy bit. The truly grueling part of the whole ordeal happened when I attempted to confirm General Motors’s claim that the console/cooler can “store up to twelve 12-ounce cans.”

First I had to get some cans, and, as I don’t drink beer or soda, this meant I had to go to my backyard, where a cooler that I’d filled with beer for a July 4, 2020 party sat. Luckily, not all of its contents were encased in a block of ice, so I was able to pull four or five beers from the chilly brown water; I managed to snag the remaining seven or eight from a box of “Rolling Rock” sitting in a utility closet for some reason.

Anyway, from there, it was time to shove 12 beers into the Aztek’s cooler. 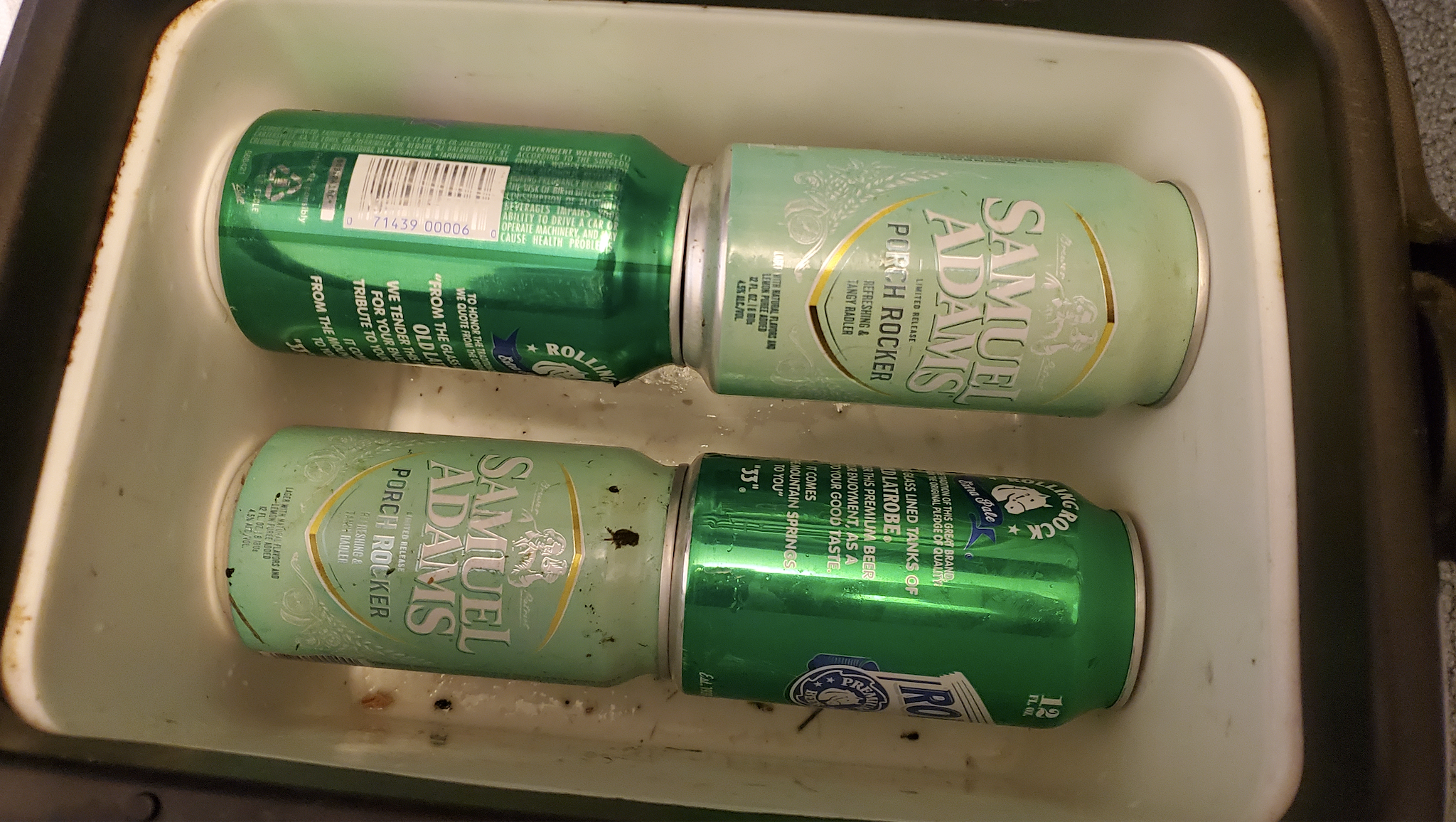 This was not straightforward, as the box is just too small to fit two cans length-wise. So you can forget that as a packing strategy. 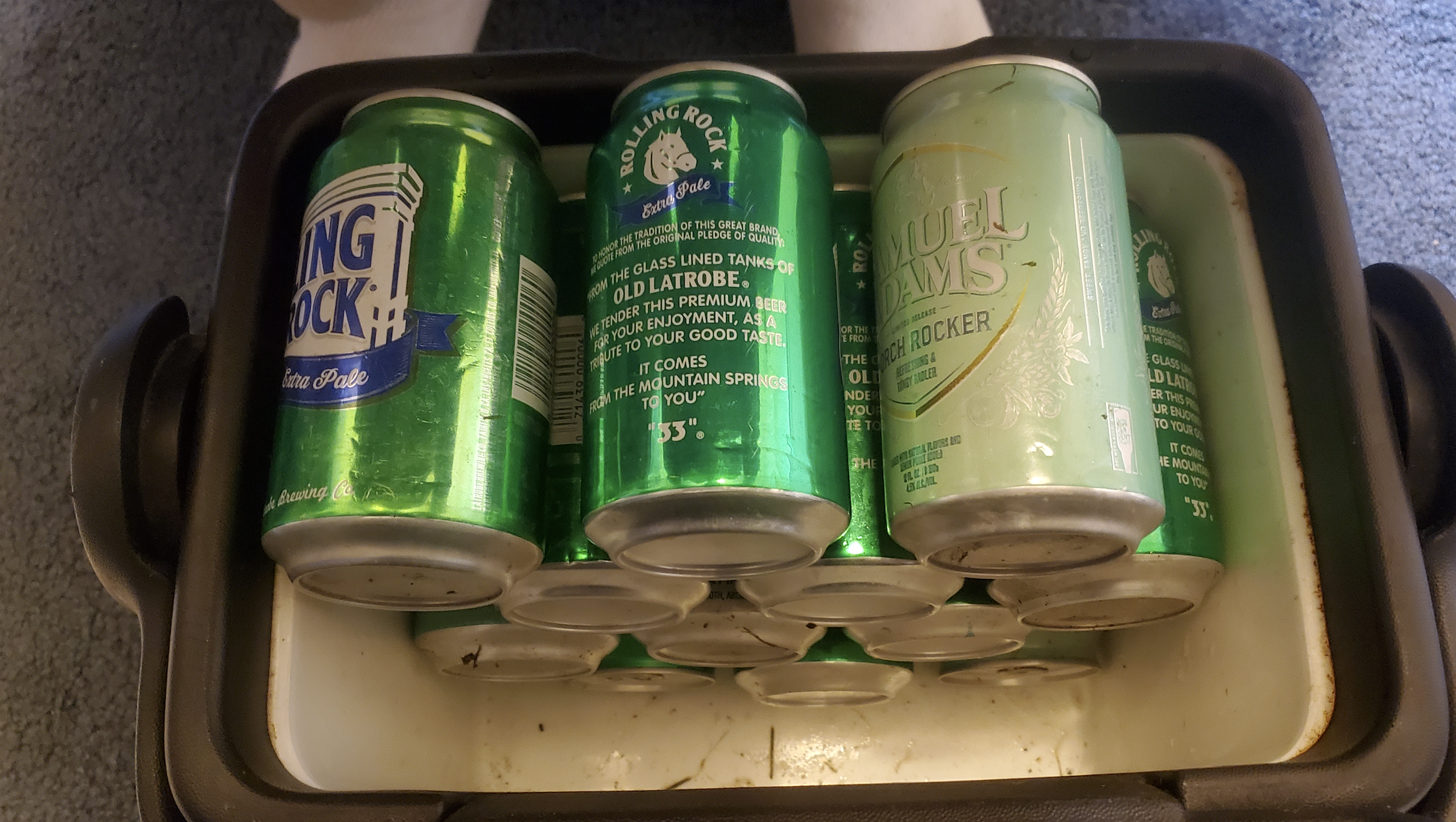 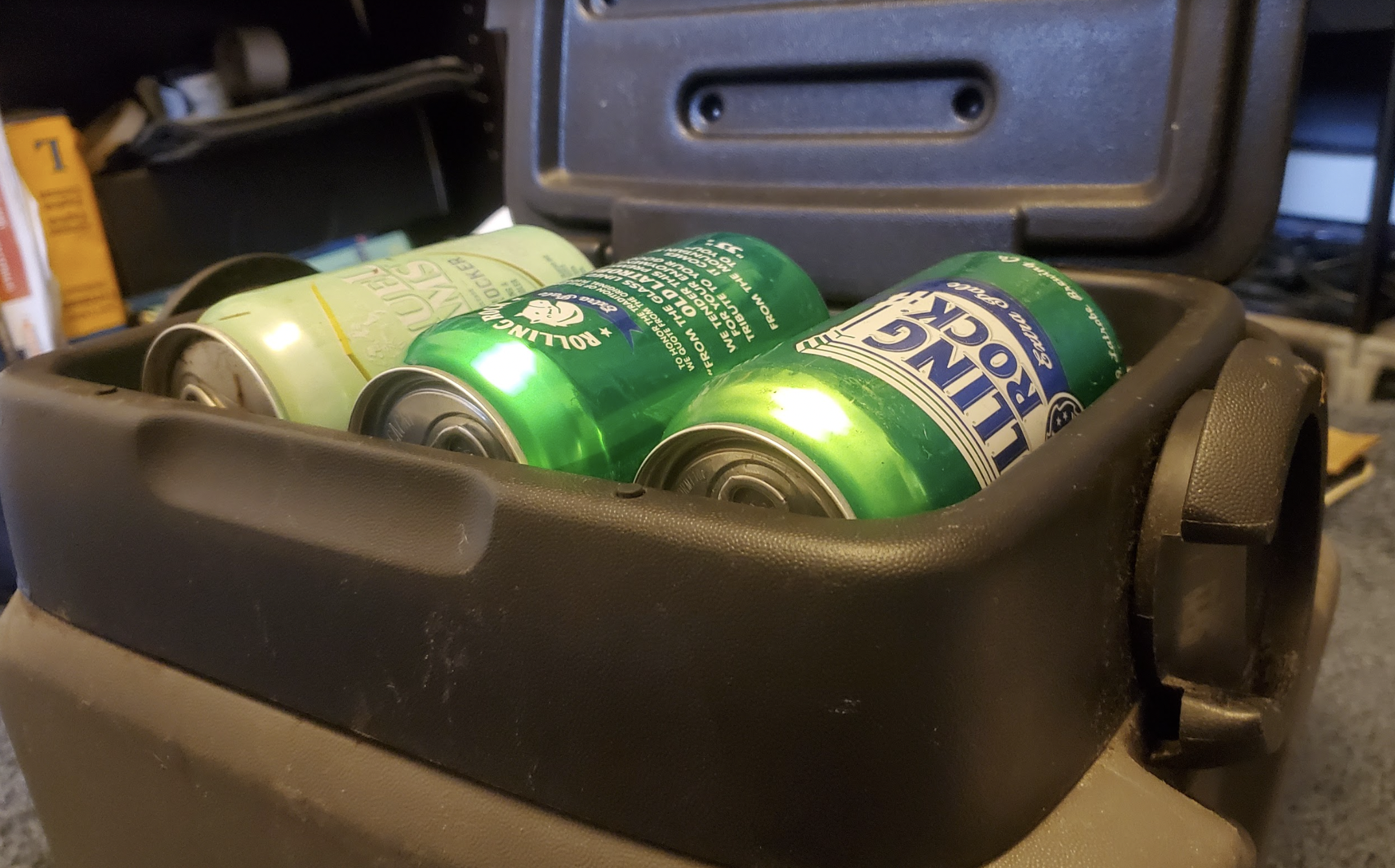 As you can see in the image above, that ain’t gonna work. 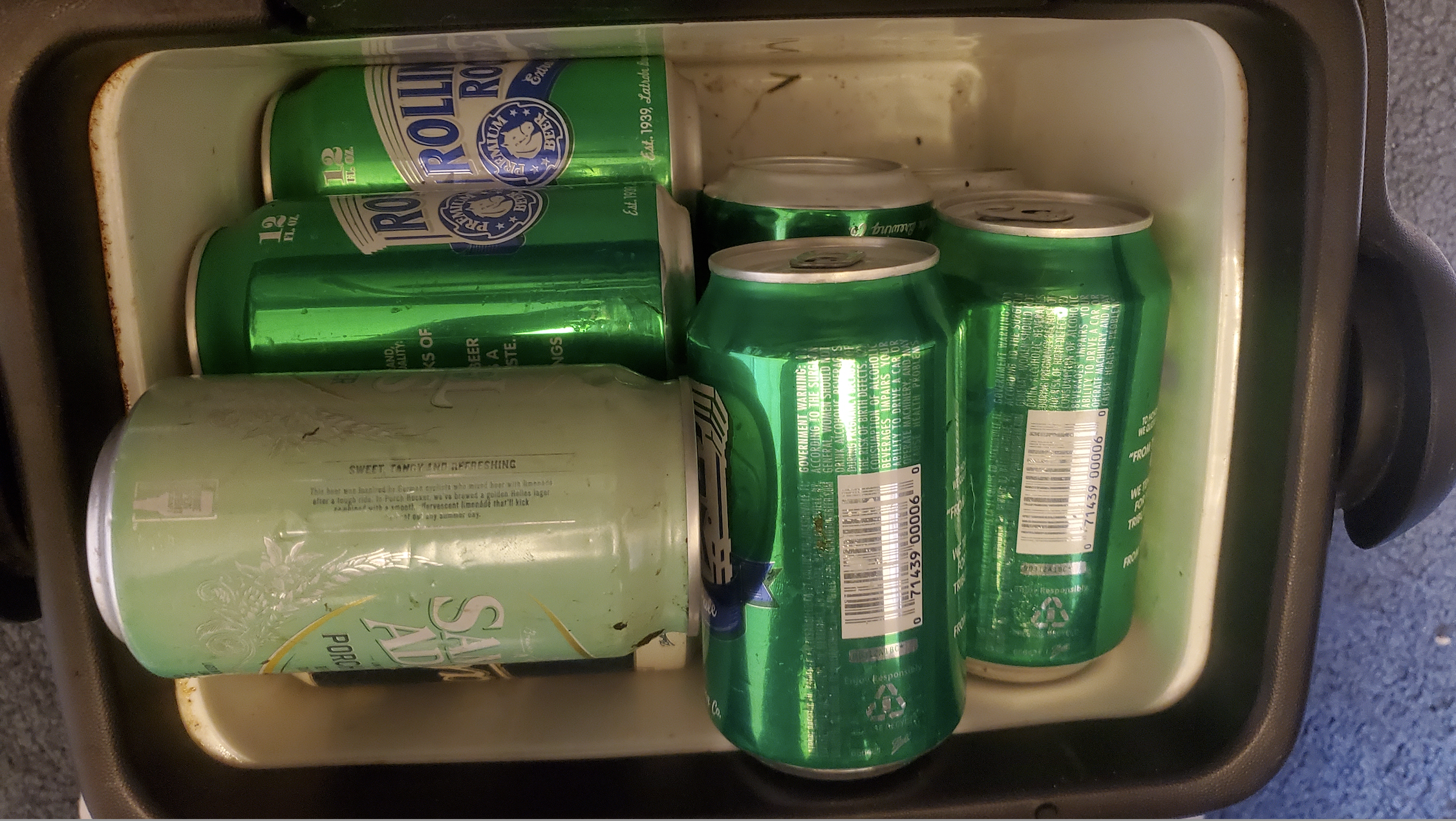 Next, I attempted a hybrid approach — I stacked some length-wise, some widthwise. This, at first, didn’t yield the intended results, as you can see in the image above. But, after 19 sweaty hours during which I obsessively stacked cans, trying desperately to convince myself that I am not, in fact, a cretin, I figured it out! By optimizing placement of the bottom cans, the hybrid method worked; Behold 12 cans:

Then someone commented on the Instagram post above, suggesting that I place the cans upright. Unfortunately, I wasn’t able to get enough cans on the bottom layer to get me enough up top to yield the full dozen: 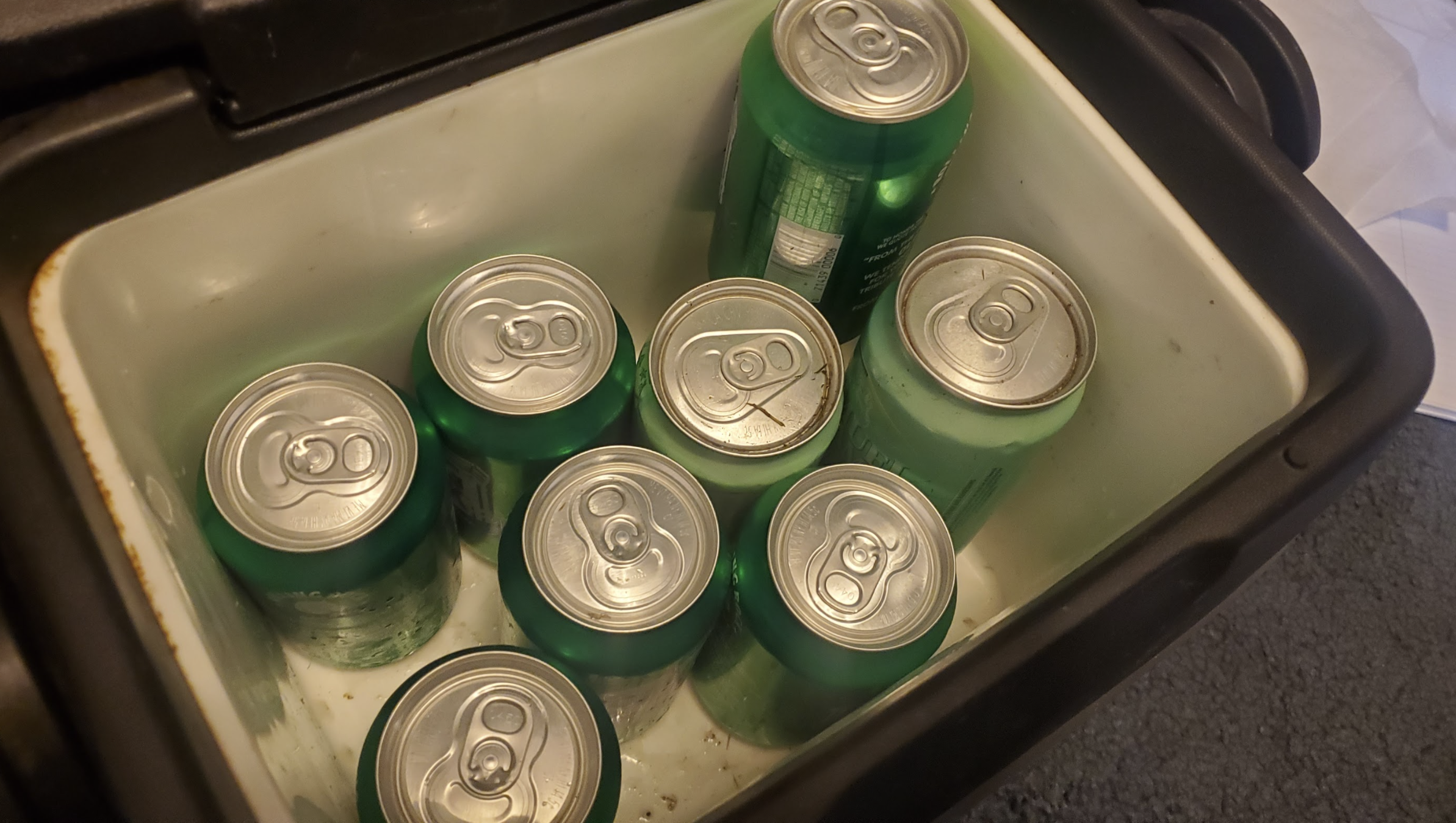 But after another 19 hours of sweaty, tear-y self-doubt later, I realized that if I place a can at each corner and work from there, I could get eight cans on the base layer: 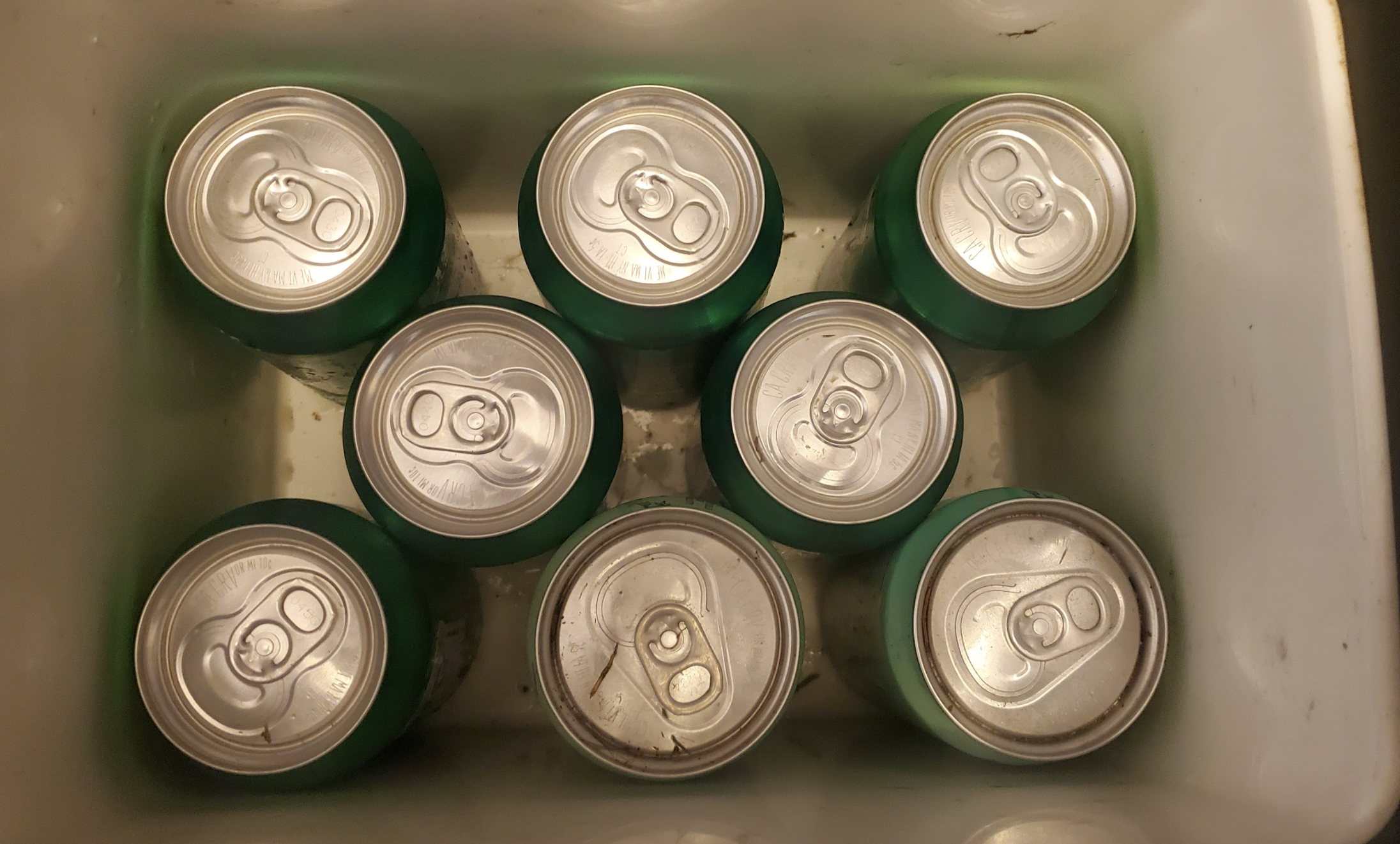 As I established earlier, the box isn’t quite wide enough to fit four cans laying on their sides, so one can does protrude a bit: 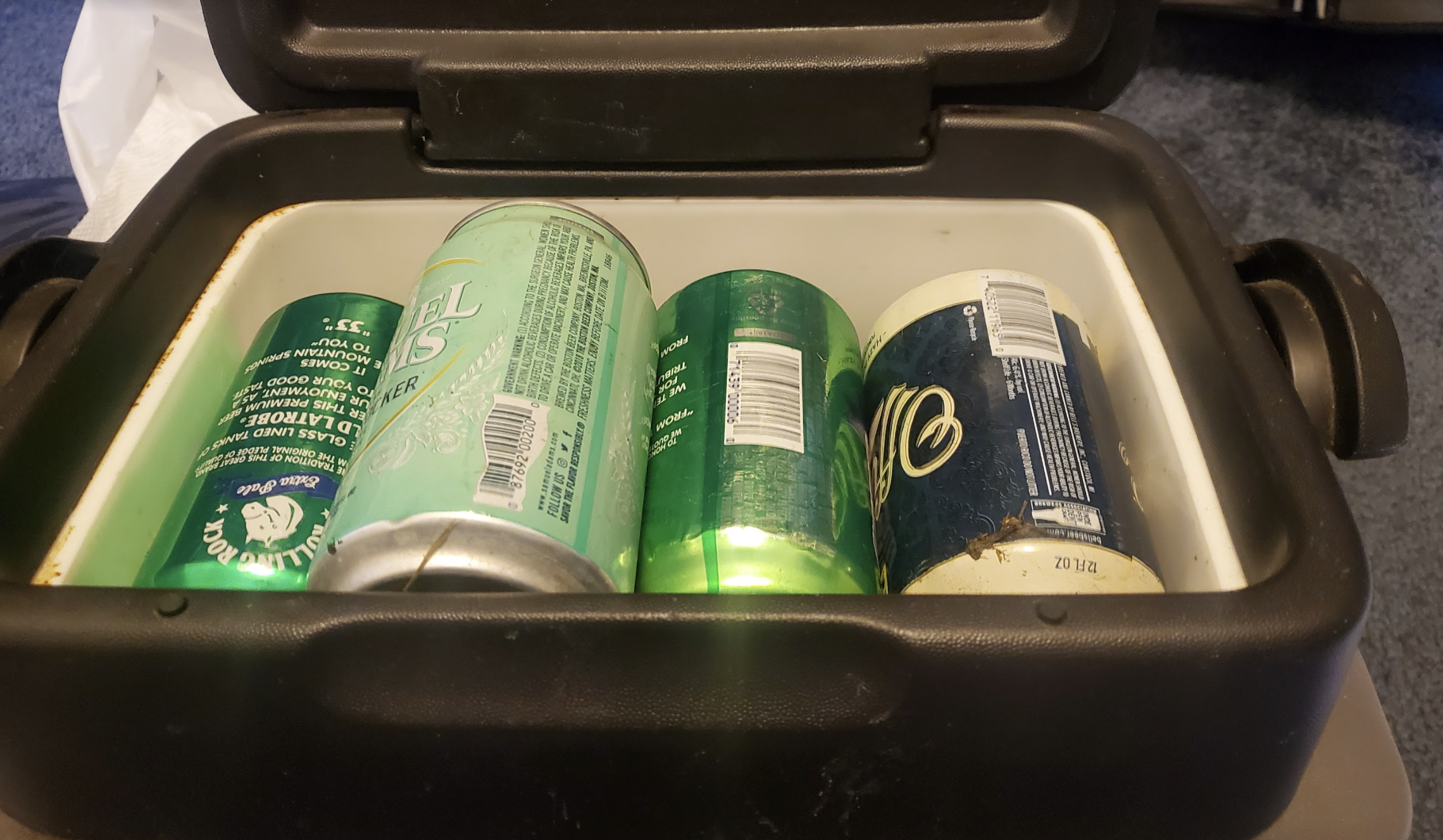 But the cooler does close, 12 cans inside! 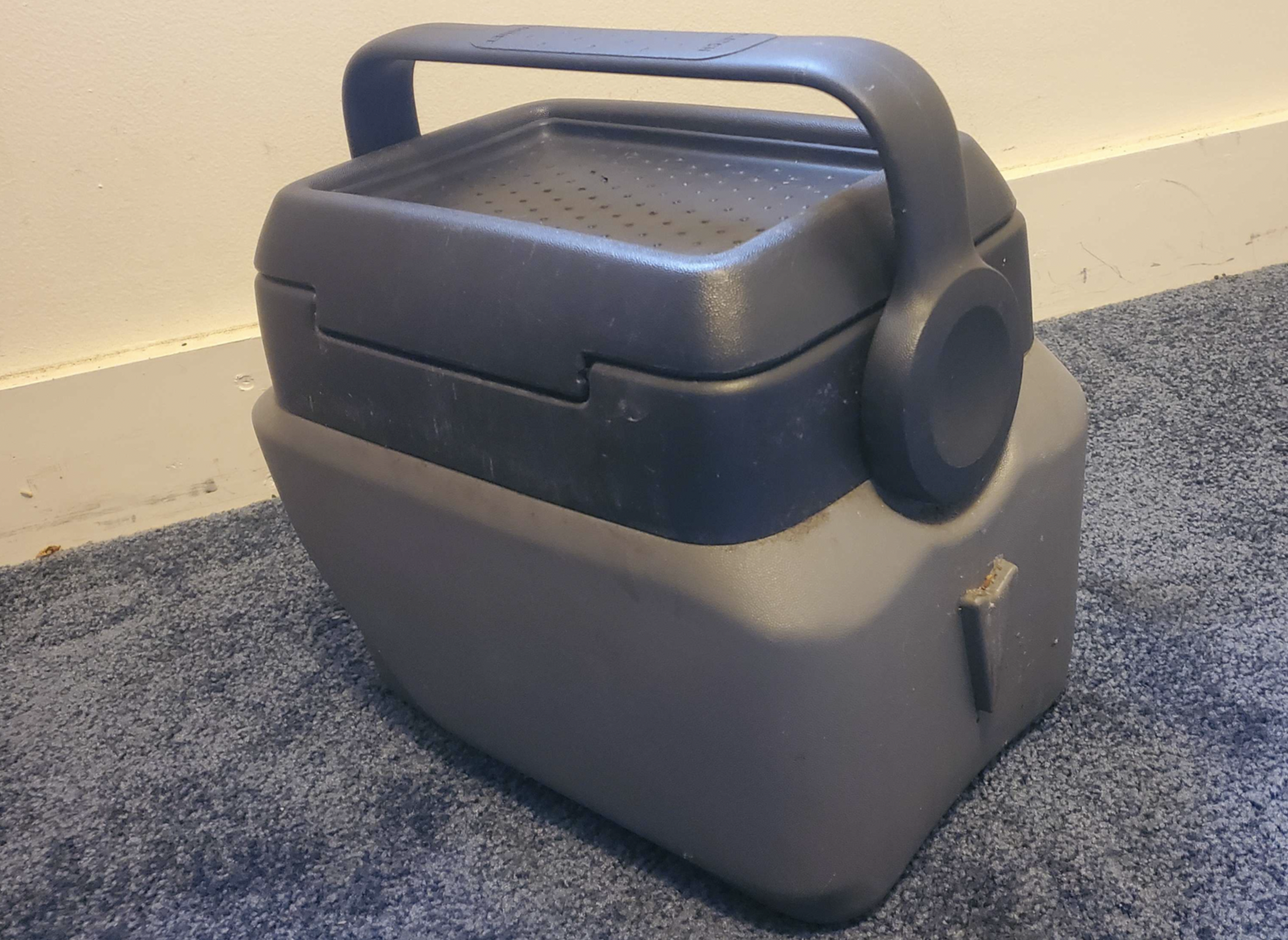 Somehow my little trip to the U.S. Auto junkyard in Sterling Heights, Michigan changed my life. Not only did I score the greatest junkyard treasure on earth — the much sought-after Pontiac Aztek console/cooler — but it taught me the value of perseverance, and it made me realize that maybe, just maybe, I’m not a dingbat.

[Editor’s note: This is the practical consumer advice you should expect to receive from The Autopian moving forward. Our crack team of researchers knew that millions of you out there were sitting in front of your Aztek coolers wondering how the hell you’re going to get the remaining three beers from your half-case inside. We’ve got your backs.].

Rust-loving Jeep man, cofounder and EIC of The Autopian, Jason's friend. Email: david@autopian.com
Read All My Posts »
PrevPreviousThat Time Porsche Thought It Was Okay To Use Wheels From The Cheapest Car On The Market
NextThis Is The Only Car That Was Both A Ford And A ChevyNext