Despite what my Uncle Murray used to claim, the first car in New York City was not his 1967 Buick Skylark. For a city so crammed full of cars, it’s actually not really clear what the first actual automobile in NYC actually was. New York was quite a pioneer of private car ownership, boasting 500 automobiles in New York State in 1900, and the very first auto show was held that same year at Madison Square Garden. Incredibly, I think the first machine we could call an automobile actually showed up in NYC a solid 60 years earlier, but I think it tends to get overlooked for this honor because of what it was: a fire engine.

Despite the bullshit that Mercedes-Benz likes to spew about the “first automobile” being the 1886 Benz Patent Motorwagen, automobiles were around long, long before that, and in the United Kingdom there was even a sort of automotive boom, primarily in the form of steam omnibuses, in the 1820s and 1830s. Here in America things were a little slower, but there was an automobile of sorts as early as 1805, Oliver Evans’ self-propelled amphibious dredging machine, the Oruktor Amphibolos, which also became the first abandoned car. 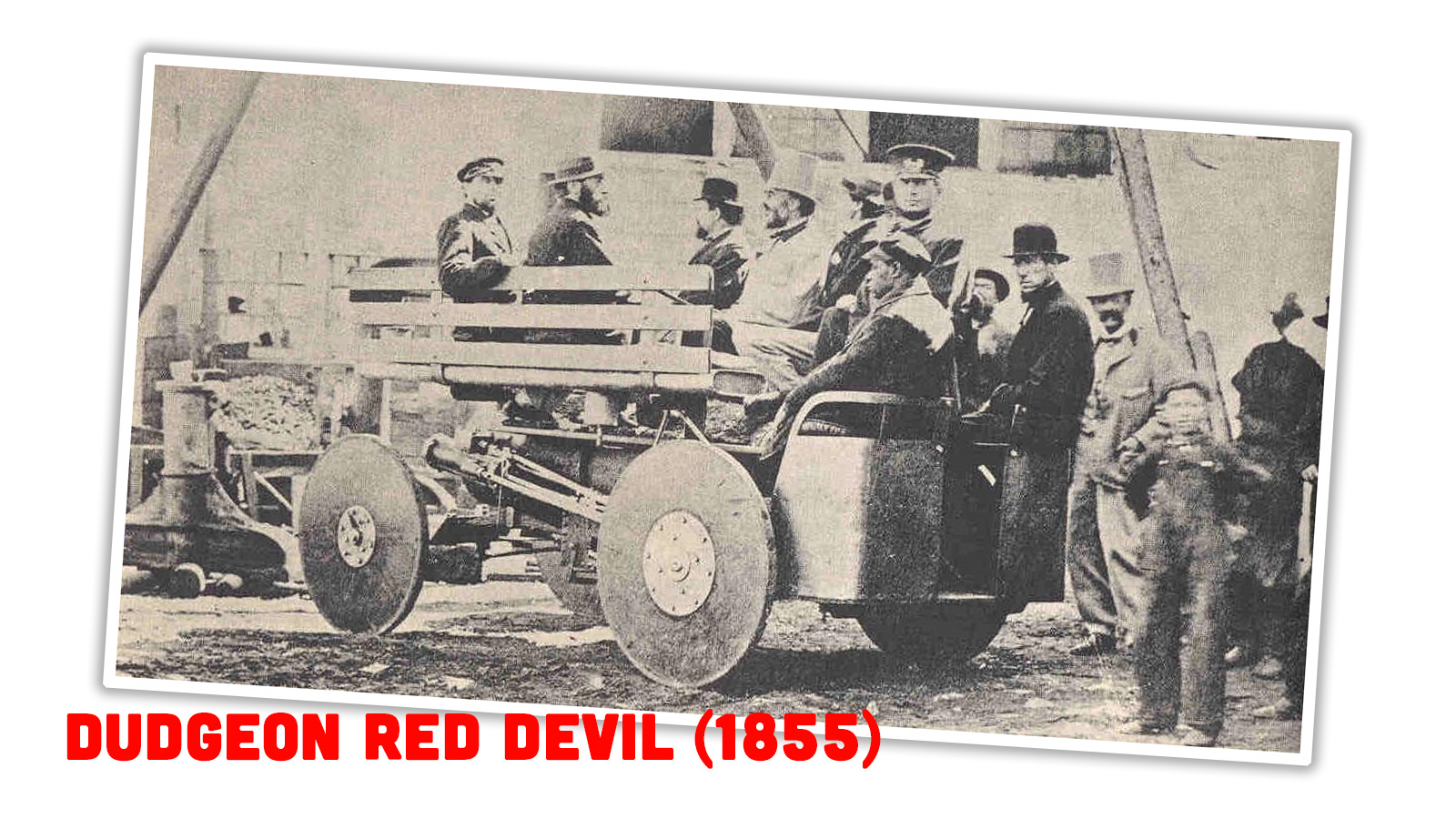 In New York itself, I had always thought that the first car to be built/driven in the city had to be Richard Dudgeon’s 1855 “Red Devil” steam automobile. Dudgeon invented the hydraulic jack, and there’s still a company building selling, and renting such equipment with his name to this day! It seems Dudgeon used to drive his steam car around the city, which pissed off everyone so much the police eventually restricted him to one road. The first one burned down in the fire that consumed Crystal Palace in 1858, but the determined Dudgeon built another in 1866.

This is all to say that this is what I had always figured was the first car in New York City. That is, until I came across something in a copy of The American Car Since 1775, which I bought from a used book store for 75 cents. What I saw was a description of Paul Rapsey Hodge’s steam fire engine of 1840: 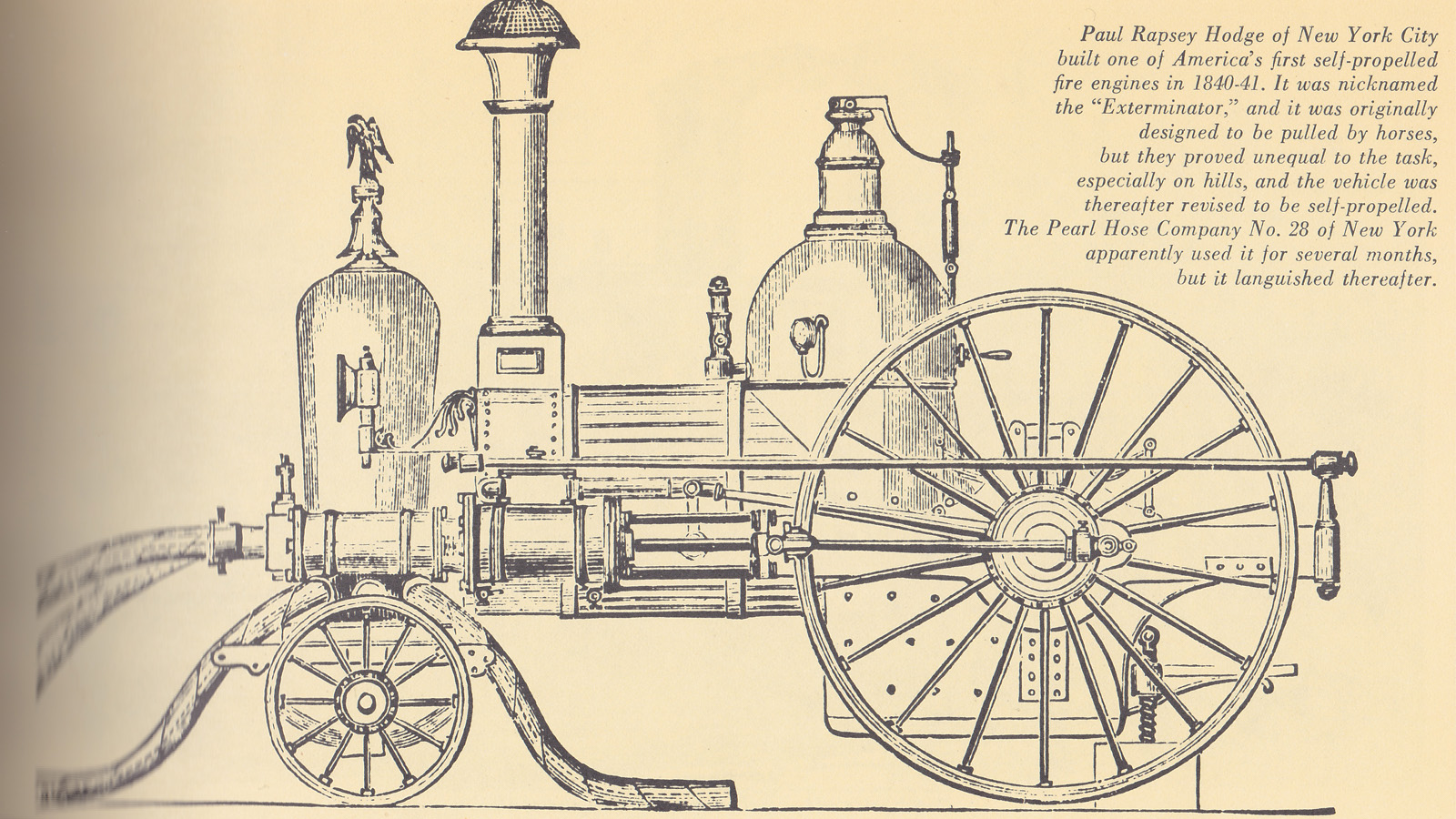 I’ve seen these sorts of steam fire-fighting machines before; normally, the steam engine is used only to power the pumps for the fire hoses, which was a huge advance in fire-fighting at the time, providing much more pressure and fire fighting power than the hand pumps that were used previously. These fire engines were usually horse-drawn, though, so I’ve never considered them automobiles. 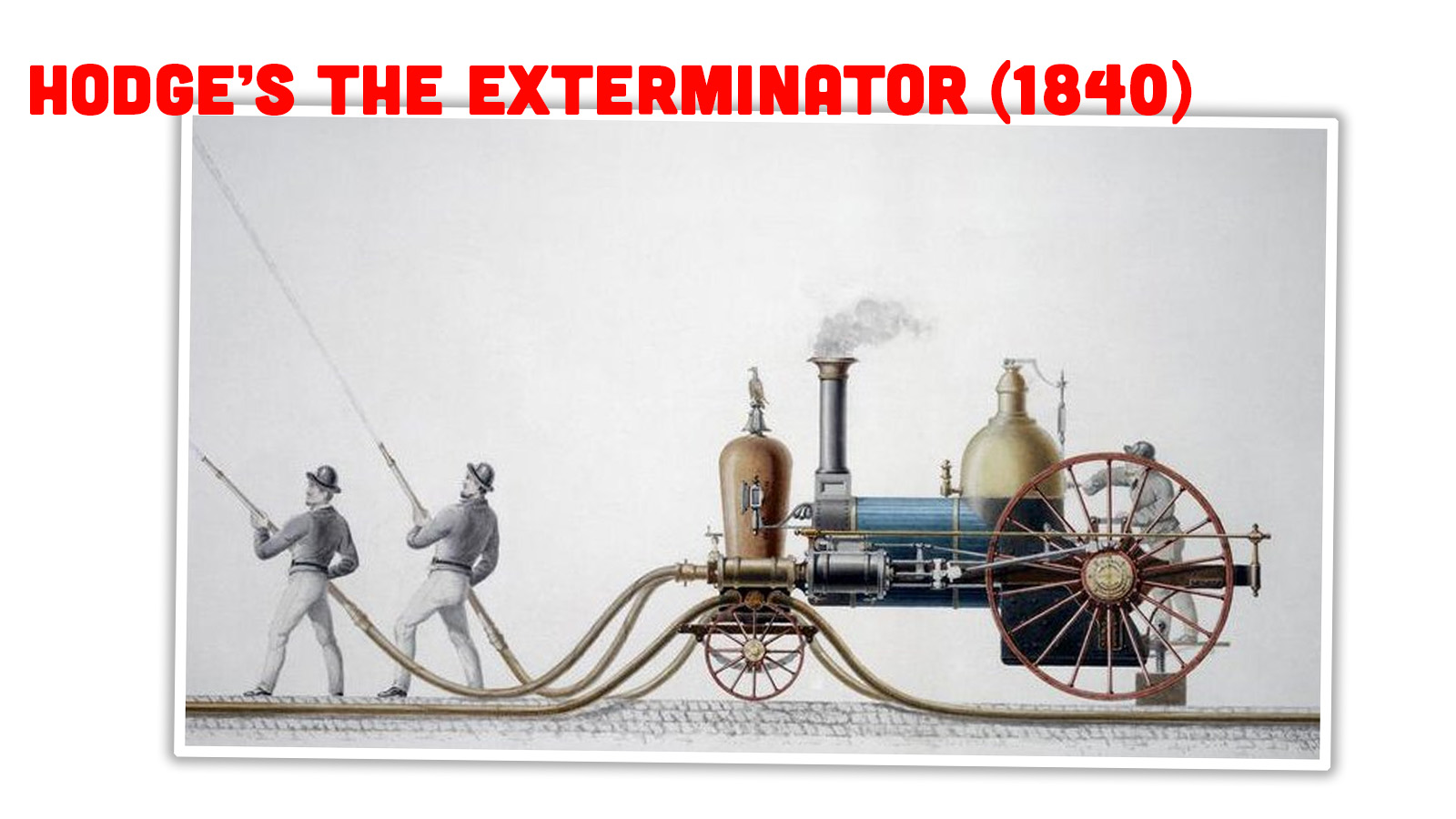 The Hodge engine, which had the badass name The Exterminator, was originally also designed to be pulled by horses. The problem was the thing was so damn heavy that the horses couldn’t really get it moving well enough, especially uphill. As a result, it was adapted to be self-propelled, and I think it was at this moment that New York saw its first true automobile.

It seems to have only remained in service a couple of months, so I’m not sure we can call it a success, but it absolutely was a motorized, self-propelled vehicle that was driven over normal roads, so it’s an automotive victory in my book.

Let’s take a look at a contemporary drawing of The Exterminator to see how it may have been adapted to become a self-propelled automobile: 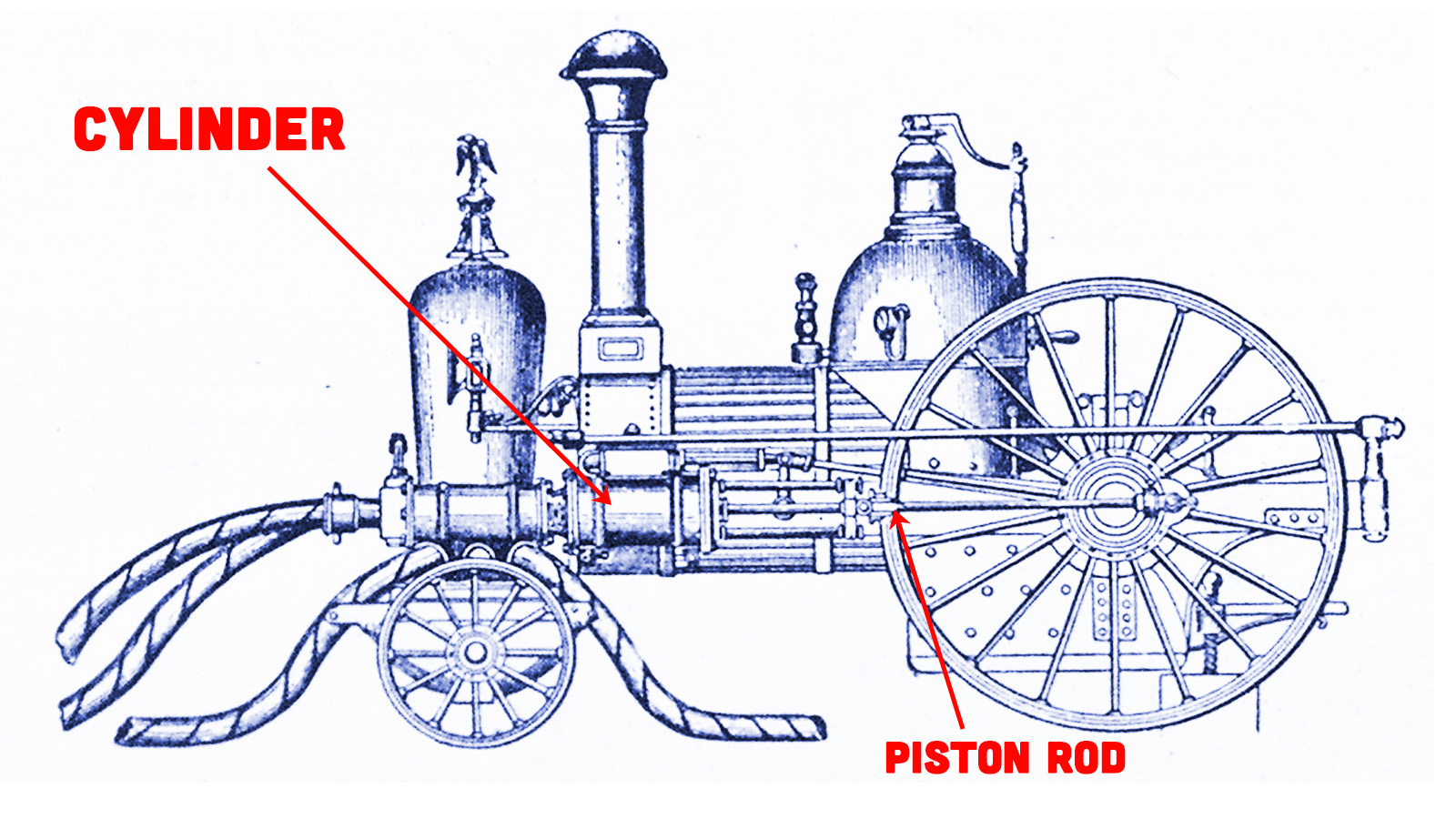 Just looking at this image and doing a lot of guessing, it seems like originally the two reciprocating horizontal cylinders (one on each side) of the main boiler were what provided the pumping action for the hoses, which I think were fed with water from the tall, narrow tank up front; the rear dome I think was the water tank for the steam engine.

My guess is that each piston rod was extended to drive the wheel via that off-center mount near the hub, which probably made for a jerky but definitely usable driving experience.

As far as steering goes, I think the smaller front wheels appear to be mounted on a central pivot, though I’m not clear on just where or how the person steering would have operated them. There does seem to be a long rod that I think is used to control the throttle or whatever they call that equivalent on a steam engine, so perhaps there were similar long control rods not shown here.

I know it’s technically possible that there was some other steam-powered road-going automobile in NYC prior to The Exterminator, but I don’t think it’s likely. 1840 was really quite early for self-propelled vehicles, especially in America, and the fact that The Exterminator only became self-propelled as an afterthought is what makes me think that it has a good claim on being the first automobile to drive in NYC streets, because it happened even before anyone even thought to want a self-propelled vehicle in the first place.

It was born from necessity, not desire, and even then it wasn’t quite good enough to really keep using, all of which says to me that this was likely to be the first time anyone in NYC had any experience with self-propelled machines.

So, the next time you’re in the Large Apple, or see movies or videos of car-gorged Manhattan streets, it’s worth remembering that the machine that started it all wasn’t even something most people think of as a car. But, if you ask me, it absolutely was. With that in mind, let’s give it up for The Exterminator, the first car to drive in New York City.

I'm a co-founder of the Autopian, the site you're on RIGHT NOW! I'm here to talk to you about taillights until you cry and beg me to stop, which I absolutely will not. Sorry. Hug? Also, David's friend.
Read All My Posts »
PrevPreviousThe Nissan Z GT4 Is A Proper Racecar You’ll Actually Be Able To Buy
NextThe Best Collector Car For Sale Is This Vintage Mobile Gospel Church Used By Two Slide Trombone-Playing MissionairiesNext