Ford builds an electric SuperVan, McLaren teams up with Nissan for Formula E, NHTSA regulators propose new black box requirements. All this and more on today’s issue of The Morning Dump.

Hey you. Yes you, internet-roaming automotive enthusiast. You remember Ford’s absolutely bonkers SuperVan Transits, right? A series of batshit mid-engined high-performance vans meant for hauling ass rather than cargo. Pretty cool stuff,  yeah? It’s been about 28 years since the last SuperVan zoomed into the public eye, but that doesn’t mean Ford’s done with the concept.

Dubbed the Ford Pro Electric SuperVan, the latest in this lineup of ballistic commercial vehicles debuted at the Goodwood Festival of Speed on Thursday and is rather unsurprisingly electric. While range likely isn’t great from the 50 kWh battery pack, four electric motors are claimed to be good for 1,972 horsepower, enough to blitz the zero to 62 mph (100 km/h) dash in less than two seconds. Yeah, that’s what I’d call quick.

While a bespoke chassis likely doesn’t offer much in the way of comfort or payload, the Pro Electric SuperVan still features Ford’s massive portrait-oriented touchscreen infotainment system and a proper loadspace behind the driver that’s accessible through a door in the bodyside. Super, check, van, check. What really piques my interest is the choice of five different drive modes that are mostly dependent on tire selection. There’s road for use with street tires, track for use with slicks, drag for use with drag radials, drift that Ford claims to work in the snow, and rally. Honestly, who doesn’t like a ridiculously quick vehicle that can carry a pizza or two across all sorts of surfaces?

We think @forduk have taken everyone by surprise with how incredible this thing is. Just look at it. That aero similar to the Ford GT is sublime. #FordSuperVan #EV #gw_ford pic.twitter.com/UfuLDsmRmq

Anyway, here’s a clip of the Ford Pro Electric SuperVan running up the hill at Goodwood. It may be quiet, but look at the sheer speed. Using green technology to go ludicrously fast and vaporize tires is always good in my books, so I’m genuinely excited to see this thing going fast.

McLaren’s Formula E Entry Will Be Powered By Nissan

More details of McLaren’s upcoming Formula E entry have come to light, specifically that the British team’s electric powertrains will be supplied by Nissan. Yes, we’re a long way from early Leafs and their tiny 24 kWh battery packs. Honestly, this is a bit weird for one big reason. While the 2022 to 2023 season is set to introduce new third-generation race cars, the current second-generation of Formula E cars uses a 54 kWh battery pack from McLaren Applied Technologies. Still, McLaren Racing CEO Zak Brown seems excited by the new partnership, saying in a statement, “We have full confidence that the collaboration will bring both parties much success.”

Interestingly enough, this isn’t the first time that Nissan has something to do with a McLaren power unit. See, Nissan and Tom Walkinshaw Racing developed a racing V8 called the VRH35L, which saw duty in the R390 GT1 car. McLaren later acquired the rights to that engine and changed almost everything in the Ricardo-assisted process of redeveloping that engine to become the 3.8-liter M838T engine used in supercars like the MP4-12C and P1. 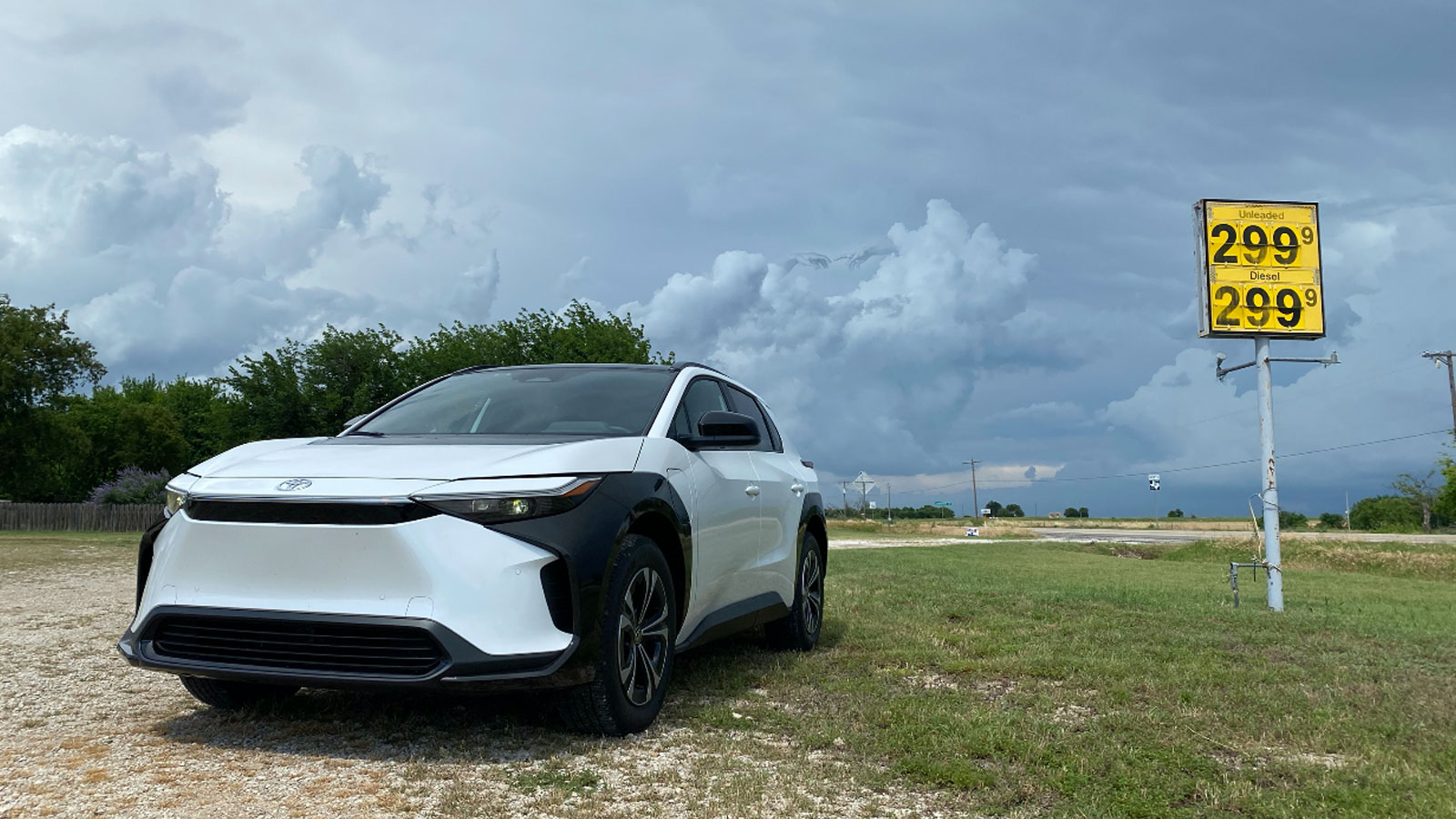 Just doing a quick informal survey of the room, how many people like their wheels to not fall off while they’re driving. Everyone? Good, then you’ll all be with me on this one. Reuters reports that Toyota is recalling 2,700 bZ4X electric crossovers because the wheels might come loose. According to Japanese regulators, sharp turns and hard braking may cause hub bolts to loosen, and loose hub bolts typically spell out bad news. While no failures have been reported yet, it’s still a little bit sketchy knowing that things might not be bolted down properly.

As for the 2,700 affected bZ4X electric crossovers, 2,200 are for the European market, 260 are for America, 20 are for Canada, and 110 are for Japan. Unsurprisingly, the bZ4X’s badge-engineered twin, the Subaru Solterra, is also affected. Subaru’s recalling a further 2,600 units of the Solterra worldwide, taking the grand total up to 5,300 vehicles. Luckily, Reuters reports that no affected Subaru Solterras have made it into the hands of American consumers. A fix for this hub bolt issue hasn’t been announced yet, so hang tight, let’s see what Toyota and Subaru have in store.

If you’re like me and have been the root cause of new safety policy in your workplace, college, or dwelling, you’ll know that when shit hits the fan, everyone wants to know exactly how that excrement collided with those spinning metal blades. Unsurprisingly, NHTSA crash investigators want to know more about collisions, so regulators have proposed new standards for event data recorders (EDRs), commonly known as black boxes.

Regulators rolled out a proposed amendment to black box regulations on Wednesday, calling for a higher sample rate over a longer sample period. See, black boxes in new cars are currently only required to record a minimum of five seconds of pre-collision data at a sample rate of 2 Hz, or two samples per second. The proposed amendment would ratchet that minimum requirement up significantly to 20 seconds of data at 10 Hz, 20 times the total data currently required. In addition to standard sample points like engine RPM, stability control status, ABS status, and steering input, NHTSA regulators would also like to see advanced driver assist system status voluntarily sampled by black boxes.

Honestly, this seems like a rather reasonable request. While 200 data samples seems like a lot, it really isn’t anything massive, and it could reduce some of the blind spots in current black boxes. NHTSA regulators claim in the proposal that “a better understanding of a driver’s pre-crash behavior will also assist in the evaluation of emerging crash avoidance features,” an important thing to get a grip on considering how dreadful some Level 2 assist suites are and how drivers seem to think that assistance equals autonomy when it very much doesn’t.

Whelp, time to drop the lid on today’s edition of The Morning Dump. Happy Thursday, everyone. Friday’s little brother is here to let us know that the weekend is just around the corner. My big question of the day to you is a rather simple one – what vehicle did you covet in high school? The stuff pimply-faced adolescent dreams are made of can vary, but the vehicles that we desire in our formative years often have a profound effect on our future automotive endeavors. For me, the semi-realistic high school dream car was a Toyota Verossa VR25, while my very unrealistic dream car was the McLaren P1.

Thomas is a Nu Rave-blaring, heel-toe downshifting, maple syrup-swilling, chassis-geeking, junkyard parts-hauling, floppy-haired scenester who's been writing about cars since college. His current ride is a 2006 BMW 325i with the six-speed manual gearbox. Instagram: @thomas.hundal Twitter: @thomashundal
Read All My Posts »
PrevPreviousForgotten Forward-Opening Hoods: 1979 Ford Fiesta vs 1981 Datsun 310
NextAutomotive Would You Rather: Awful Tapes EditionNext