It’s time once again for Shitbox Showdown! Today’s choices are sure to generate a lot of “those are both awful, what’s wrong with you, you should feel bad for choosing those” responses, but I don’t care; I like ’em.

I admit that yesterday was just a blatant attempt to needle David about his little Tracker buddy. I kept expecting him to chime in, but I don’t think he posted at all yesterday. (In fact, should someone go do a quick wellness check?).

[Editor’s note: I was off-roading in northern Michigan yesterday. Also, all I read was “I’m willing to admit it when I’m wrong, and it turns out that David’s little Tracker was actually a hell of a score.” Also Also: I have plans to acquire a Willys Wagon, but not just any Willys Wagon. Stay tuned. -DT]

The results are no surprise…

Of course it’s the Jeep. I mean, come on.

Now, I think we can all agree that the late 1970s-early 1980s was a miserable time for cars. But if, like me, you were a car-crazy kid at the time, there’s some undeniable nostalgia tied up in cars from that time. And it’s not always about the car; sometimes it’s just one tiny feature. In the case of these two, it’s the way the hood opens – hinged at the front, opening at the firewall. Nobody does that any more. I think the last cars sold in the US to have forward-opening hoods were BMWs, Saabs, and Buick LeSabres from the early ’90s. But it used to be common, and there’s something really appealing about it, at least to me. Maybe I’m just weird.

Hood hinge location aside, these are both cars that you just don’t see anymore. Both were simple, cheap economy cars, built to hit a gas mileage number and that’s about it. As such, nearly all of them were simply used up and thrown away decades ago. But somehow, in a wild and mystical place called California, these two managed to survive, and I’m presenting them here for your reading pleasure. 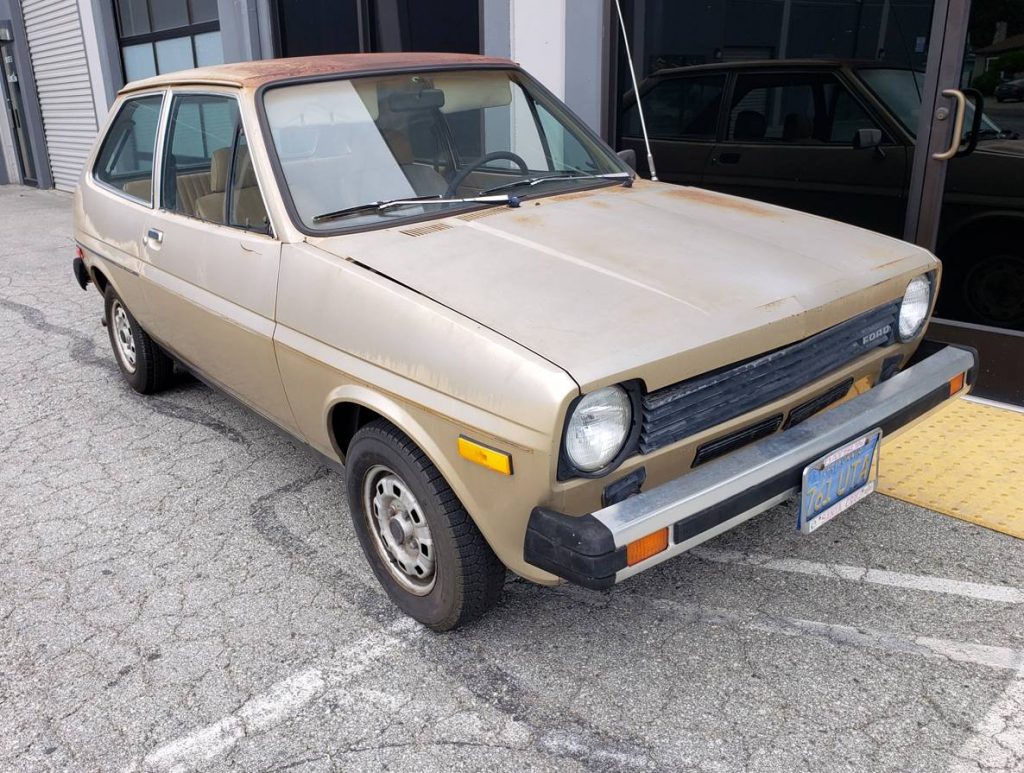 In the mid-late ’70s, Ford’s small cars were the Pinto, and… the Pinto. Sales for the little “barbecue that seats four” were tanking, and even without all the controversy, it was technologically outclassed by European and Japanese imports. Ford decided to fight fire with fire, and brought the Fiesta over from Europe for a few years as an alternative. 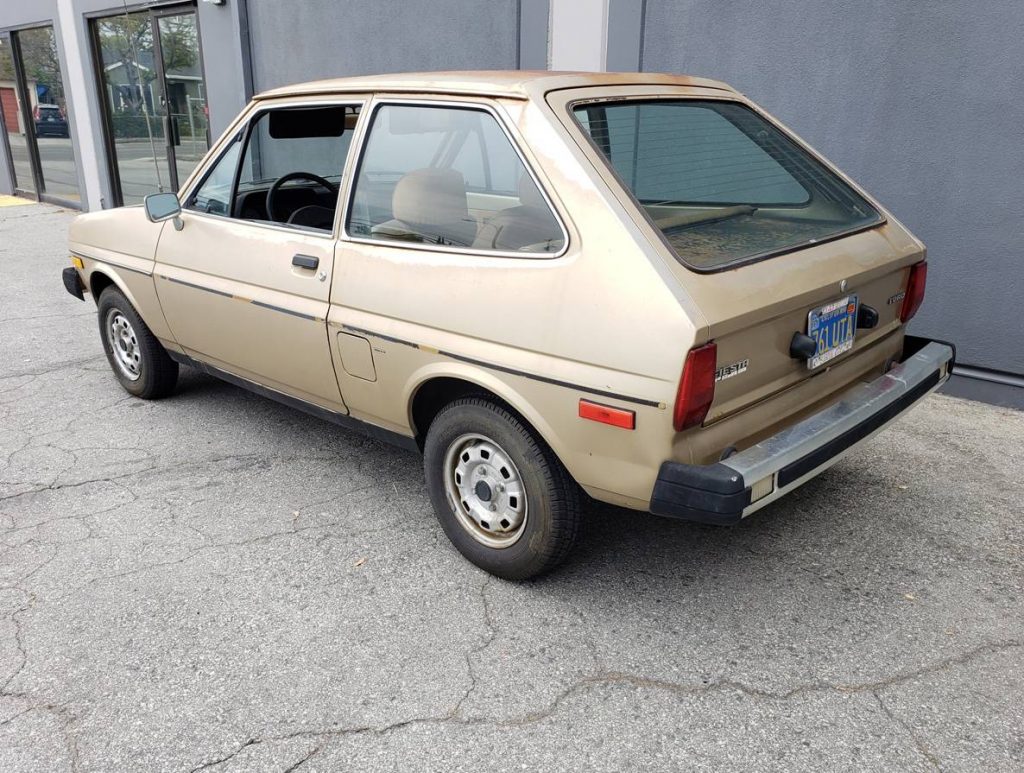 This car is largely forgotten in the U.S., but across the pond it was a big success. Of course, they got cooler versions of it than we did, like the XR2. Here, it was just seen as a smaller, crappier Rabbit by most people. 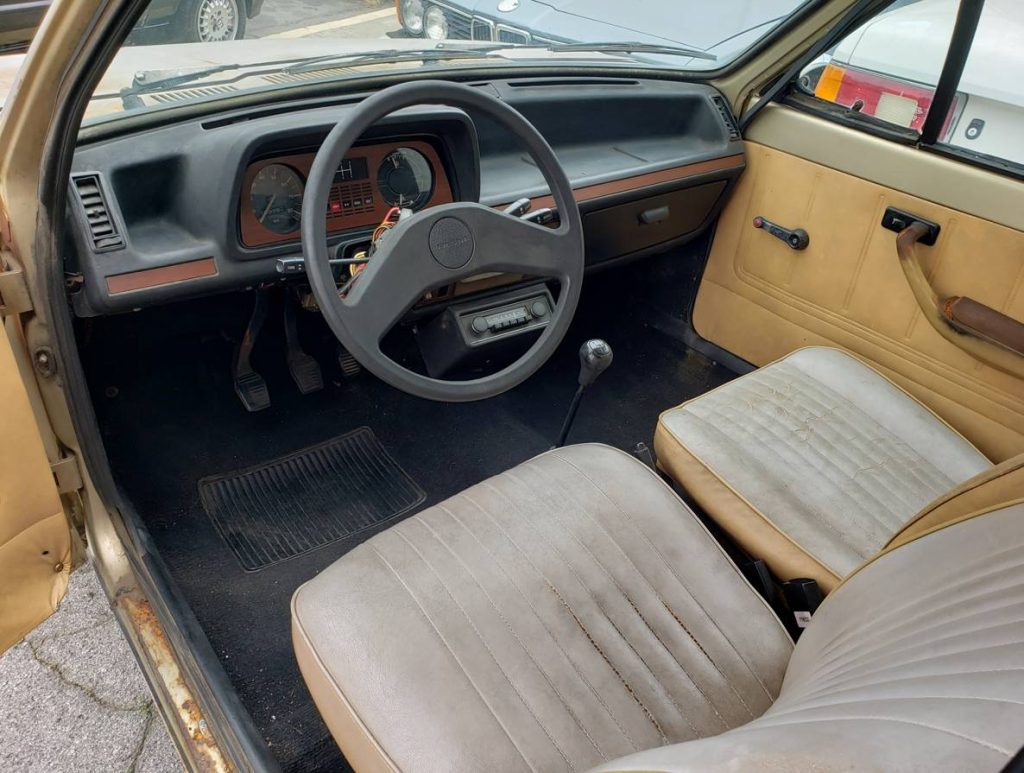 It’s definitely of a different era. There’s no way anyone would put up an interior this Spartan in a car today. Well, except maybe me. Where most people see a “penalty box,” I see a refreshing lack of bullshit. You can hear the tinny clank of the doors closing and feel the buzzy engine in these photos, true. But something about that simple dashboard, and that long gearshift coming right up out of the floor with nothing around it, makes me want to hop in and drive.

And look! The shift pattern is right on the instrument panel. How convenient! 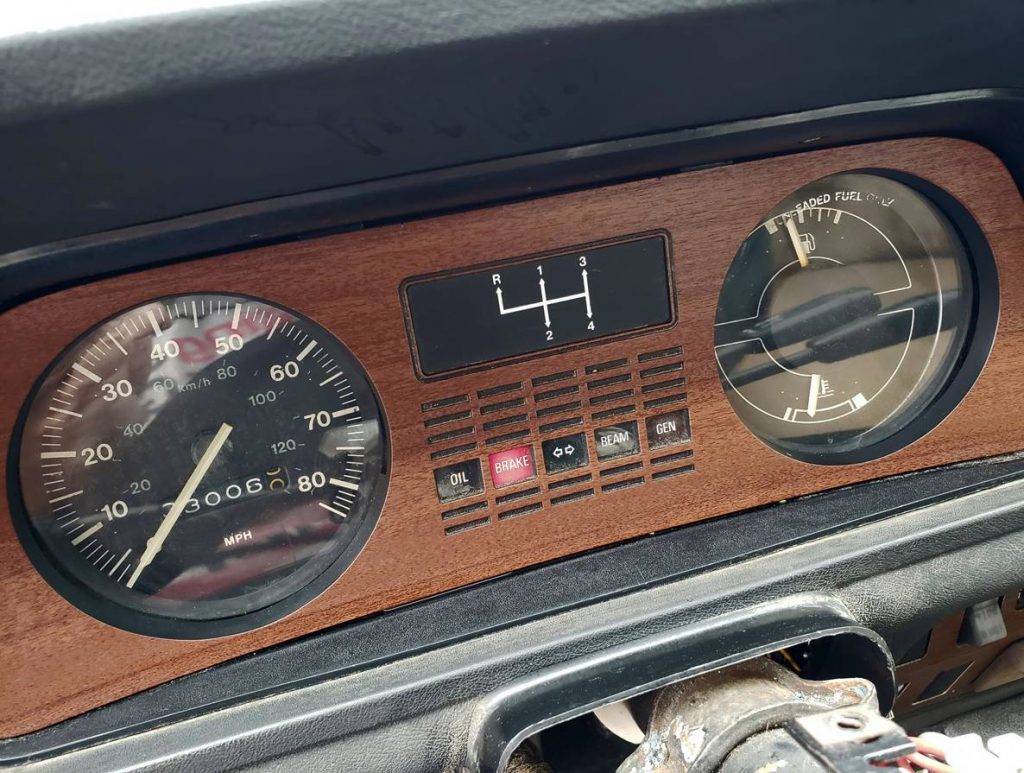 This car is being sold at a dealer, which means there are probably no records of anything. And there’s also apparently no key; you have to start the car with a screwdriver. [Editor’s note: Oh hell yeah. -DT]. But they say the car runs and drives well, though it hasn’t been registered in 19 years. Best get some new belts and hoses before you go too far. 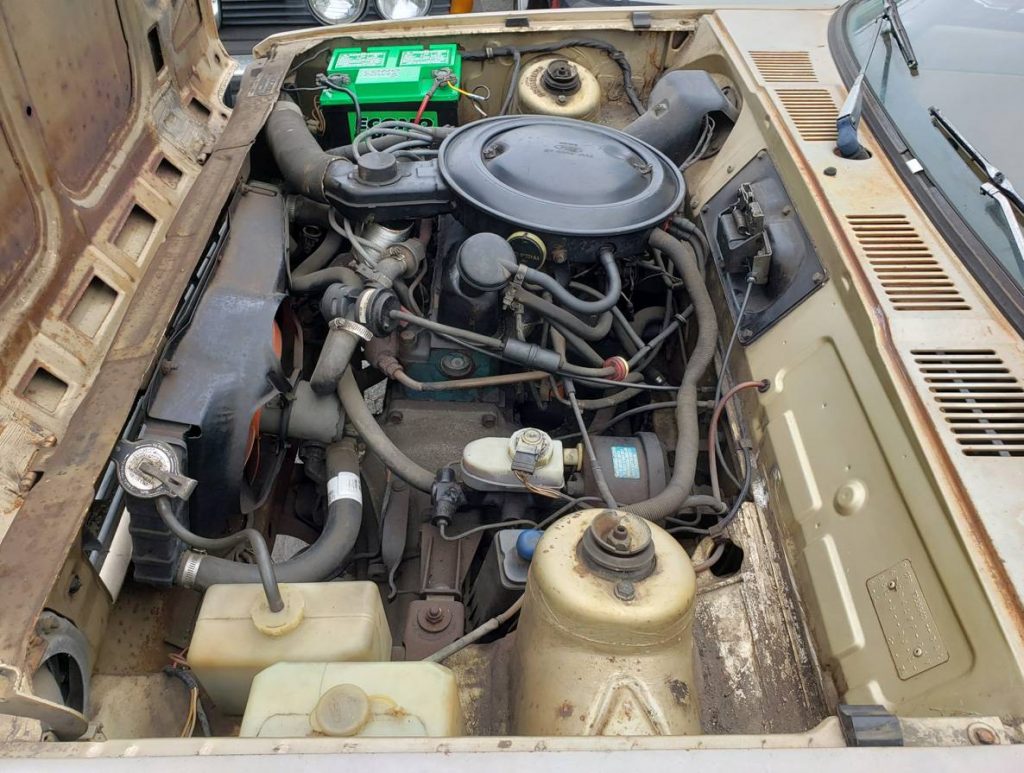 There’s some surface rust, commensurate with having been parked outside for a long time, but where the sun hasn’t beaten down, it looks clean. And it’s all there, and all stock. 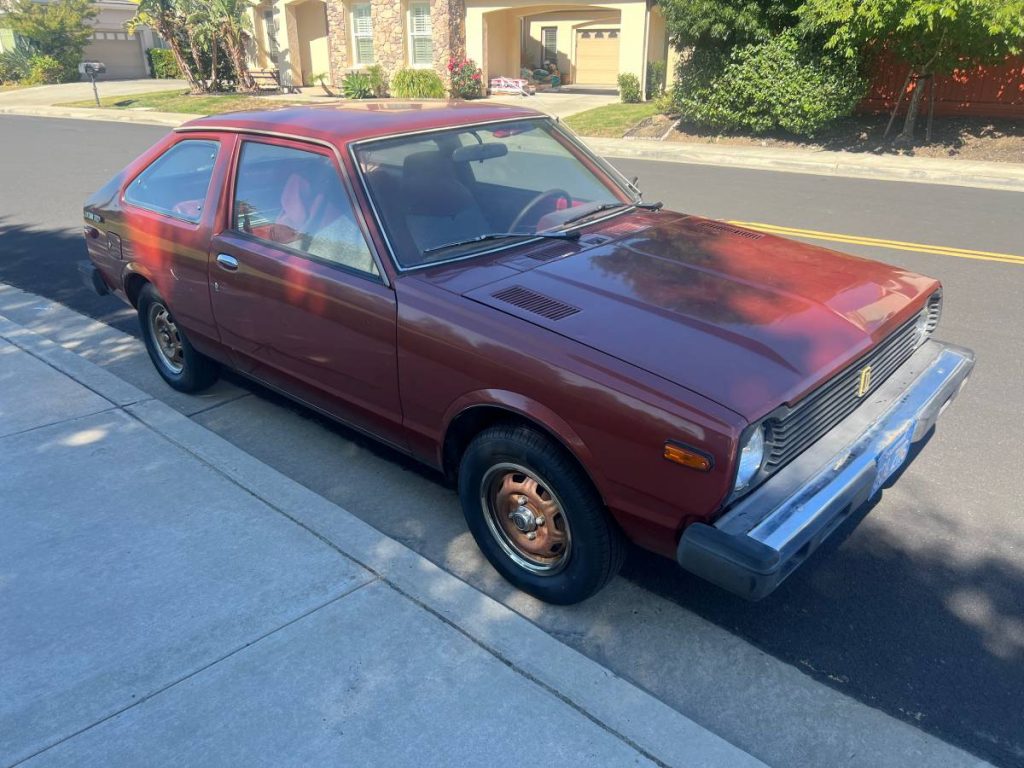 Somehow even more unlikely than a Ford Fiesta turning up for sale is this time-capsule Datsun 310. This car, sold as the Pulsar or Cherry in other parts of the world, was not a successful car in the US. But Nissan’s US lineup was a little muddled back then, with several models overlapping and hard to tell apart. The little 310 got lost in the shuffle, and was replaced with the Sentra around the time they told everyone that “The Name Is Nissan.” 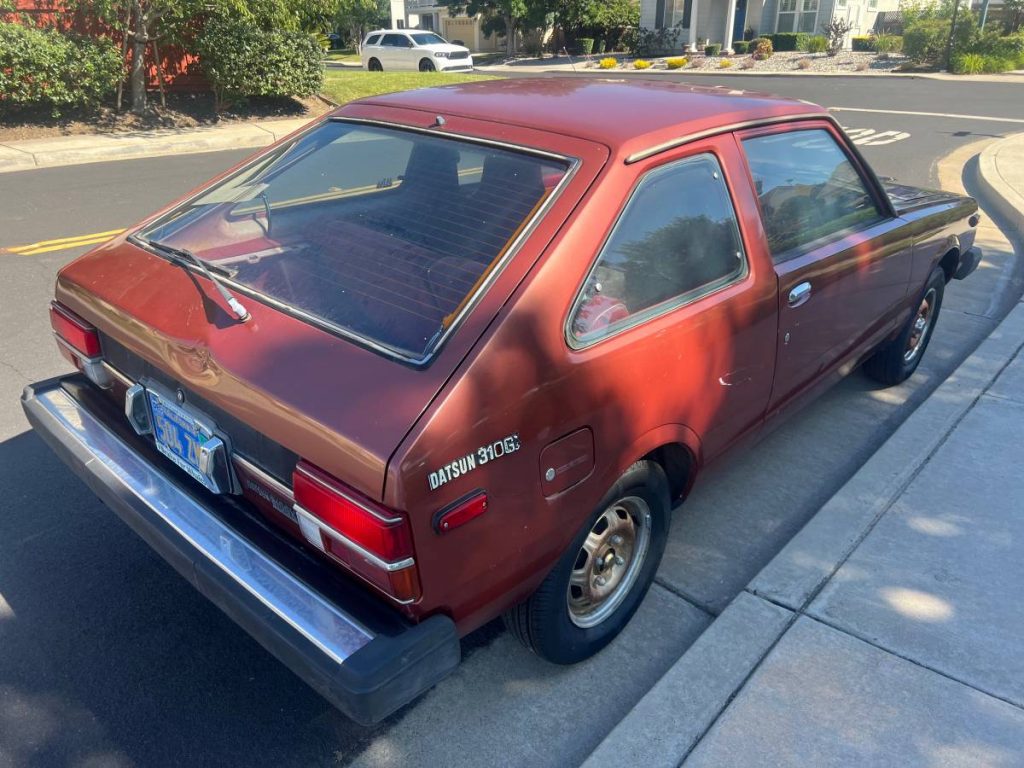 It’s a pretty forgettable car, really: just another little square front-wheel-drive hatchback from the early ’80s. But rarity and time have somehow made it – not cool, exactly, but intriguing. 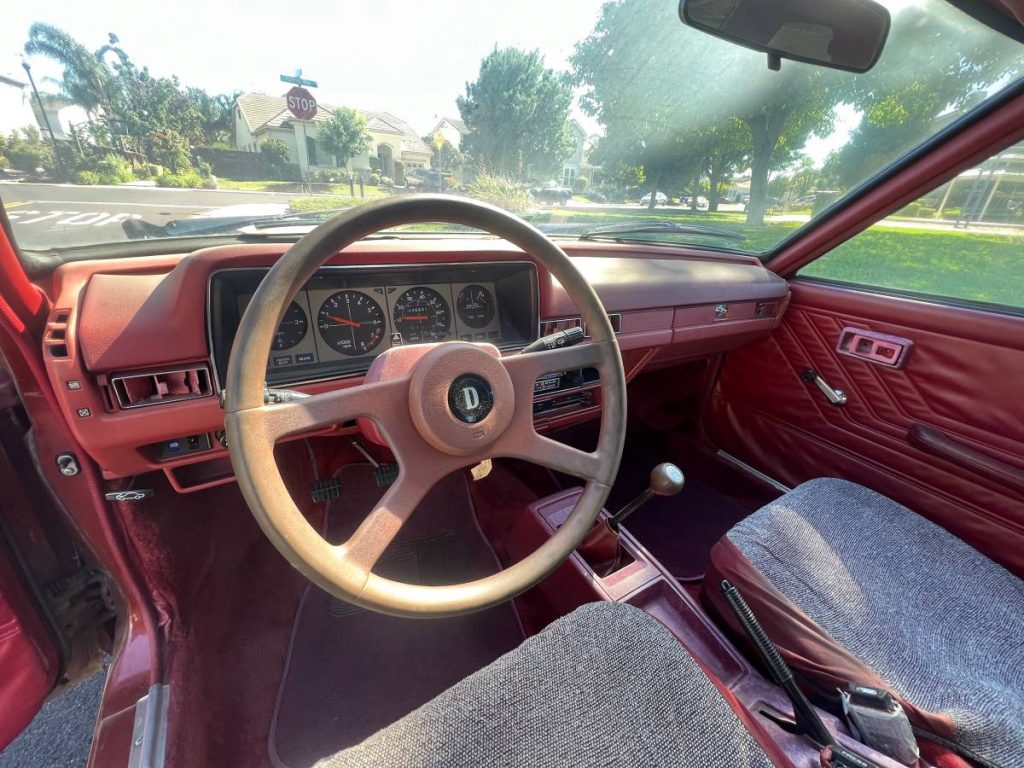 This car must have been parked in someone’s garage and forgotten about. That’s the only plausible explanation for it being so well preserved. It has a couple of dings, there’s some clearcoat missing from the paint, and some sun fading on the interior (I don’t think that door handle was supposed to be pink), but it’s got to be one of the nicest 310s left. 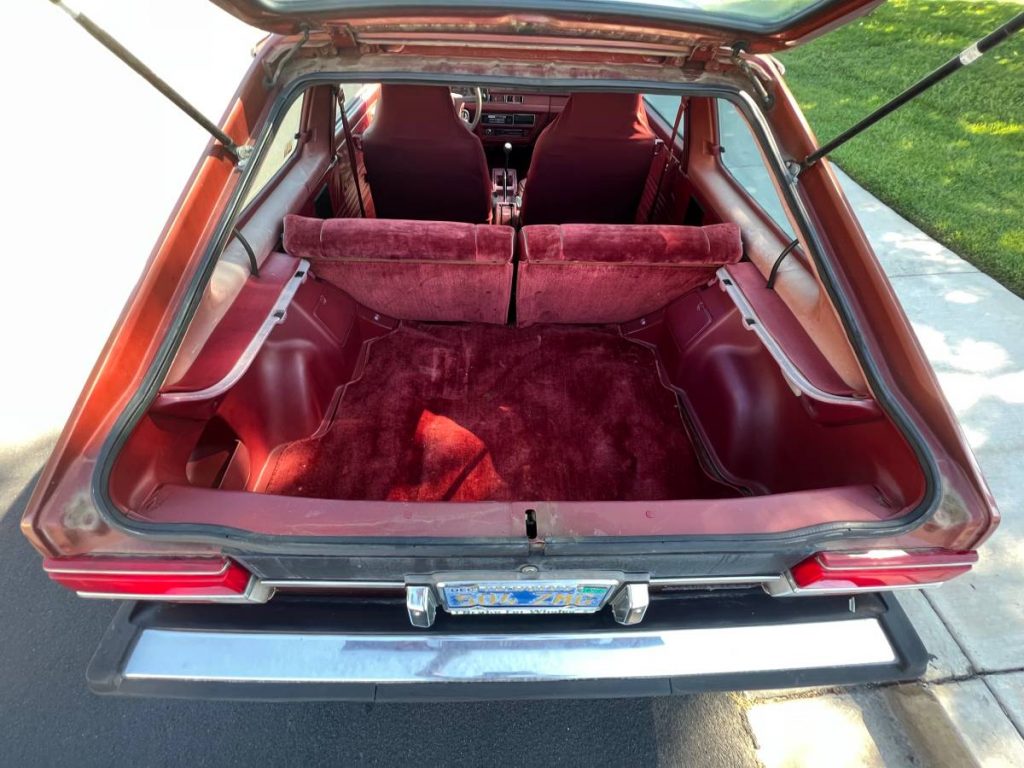 It does have one cool feature I didn’t know about until I started researching it: not only do the rear quarter windows pop open (another long-gone feature that I really miss), they’re remotely-operated from the center console. See those black cables coming up behind the rear seat? Those are connected to little slidey-levers that let you pop open the vent windows from the front seats. And it’s all mechanical, because who needs a little motor to do everything for them? 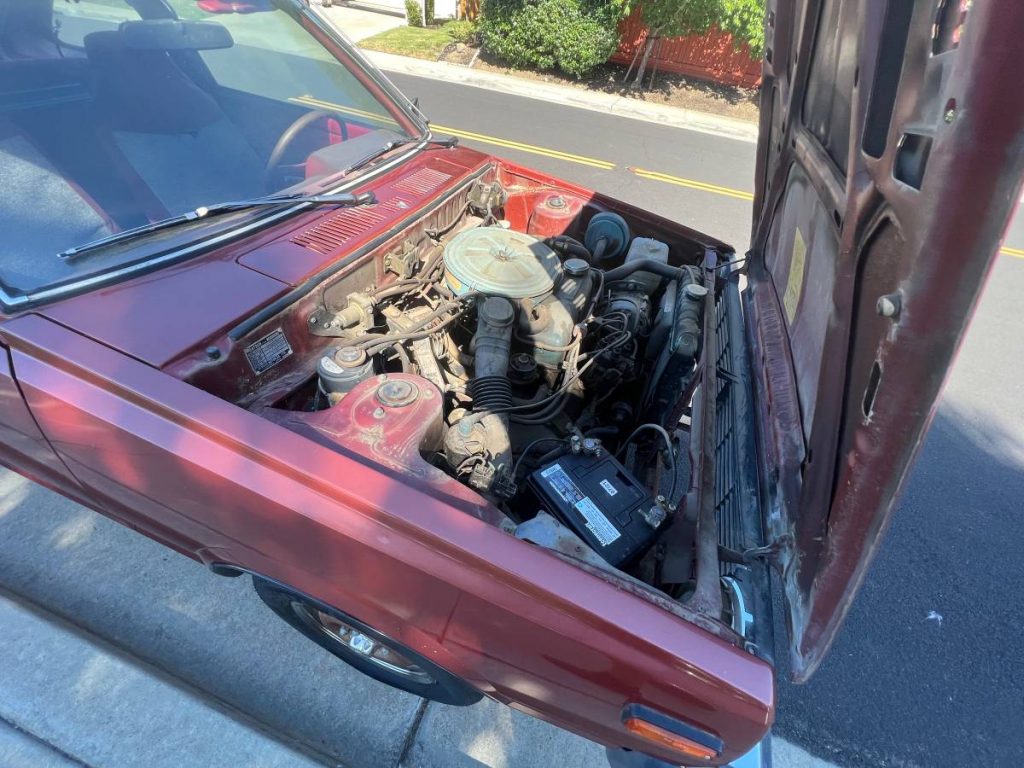 The real trouble with a car like this is: what do you do with it? It’s not really suitable for daily use in modern traffic, and if you tried, you’d just use it up and it wouldn’t be nice anymore. But it’s not valuable enough to bother keeping it in this condition. If I lived in a small town and never went above 40 mph, I could see having some valueless rarity like this to putter around in, I guess. Maybe this car will find such a home.

Neither one of these cars is anything special [Editor’s Note: Say what? That Datsun’s interior is great! -DT], other than having won a war of attrition against time, weather, and traffic. They’re automotive curios, fun to see but not really worth spending actual money on. But if you were to put one in your driveway, which would you choose?