I’ve been writing about taillight subculture a lot, and not in the alarmist ways that mainstream media outlets tend to do, portraying them as deviant libertines capable of almost any atrocity, luring in our children with alluring blinking lights, and so on. That’s not what they are, of course, and I want to be sure to portray all the facets of the Taillight Subculture clearly and fairly, including more marginalized groups like the Backlighters. Backlighters are reverse-lamp enthusiasts, and I’ve written about them and notable reverse lamps before. This time I want to talk about a car that’s very important and controversial in the Backlighter community, the fifth-generation Pontiac Grand Am.

I was informed about the importance of the 1999-2005 Grand Am when I was invited to a Backlighter gathering at the only Backlighter-specific establishment, The Clear Nacho. Because the Backlighter sub-subculture is so small, they can’t really support any bars or clubs, so the primary Backlighter gathering place is a combination food truck that sells nachos and serves them in a portable steam room.

Granted, the combination of what should be crunchy nachos eaten in a steam room that rapidly turns them into limp corn Kleenex triangles is pretty ill-considered, but the Backlighters seem to have embraced the experience of eating soggy nachos while wearing nothing but a towel inside a tent full of hot steam, so I did my best to play along and try to enjoy it. I did this because any invitation to a Backlighter meeting is a rare thing indeed, and I wanted more insight into the reverse-lamp focused subculture.

I got that insight, because when I arrived I found myself in the middle of a heated debate about the fifth-gen Grand Am. You see, the Grand Am is unique among nearly all cars in that it has what appear to be twin sets of reverse lamps, one set integrated into the taillight units as on most cars, and another, larger set integrated into the lower bumpers of the car: 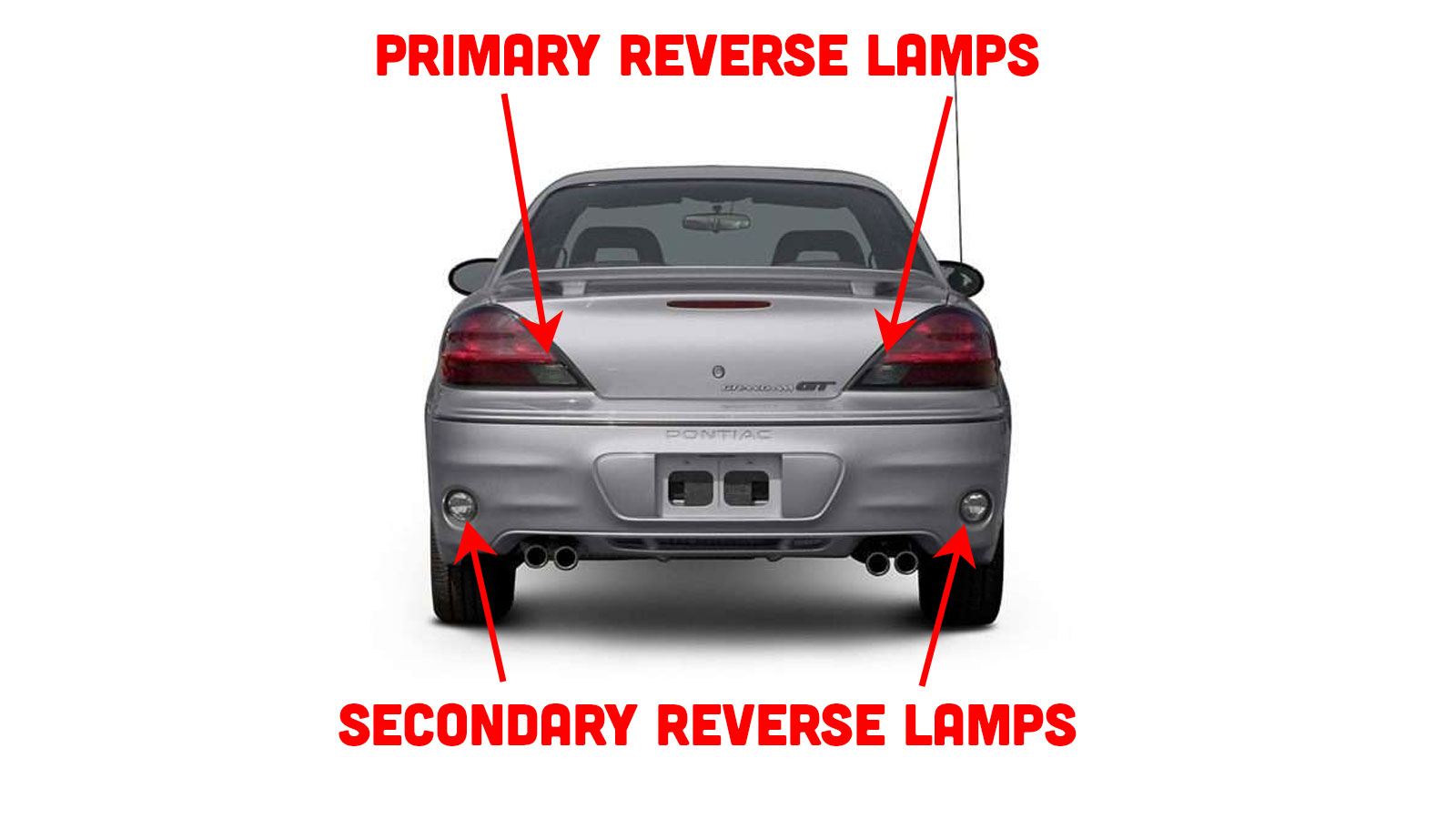 Now, I had noticed these before and, surprisingly, hadn’t given them much thought. I’d always assumed the extra, large, round reverse lamps were there because Pontiac’s rather busy styling of the era demanded something to be going on in that vast tract of bumper-skin plastic, because those four creases and license plate-flanking panels just weren’t enough.

Why they decided to go for redundant reverse lamps always struck me as an odd choice, since they could have used those units for rear fog lamps, perhaps, even if almost no American cars ever include those.

The reverse lamp fetish community tended to see the choice as a tacit bit of approval from one of the largest carmakers on the planet, and that meant something. Exactly what they meant is where the controversy starts.

See, there’s a contingent that feels the lamps are purely redundant, and only there to give approval to back-up light enthusiast groups like the Backlighters. Another contingent thinks this idea is ridiculous, and the extra reverse lights have an additional function: to act as side or corner reverse lamps.

We’ve seen these sorts of corner reverse lamps before, like on Saabs that called them Side Guidance Reversing Lights and on C4 Chevy Corvettes where they were simply called (rear) cornering lights.

The point of these useful and under-appreciated lights is to make reversing out of tight, dark spots easier, so if you’re, say, turning and reversing out of a tight parking place at night, you get some illumination around the corner of the car so you don’t run over a discarded bear trap or abandoned infant or whatever. Or hit a brick wall. Any of those.

The problem is that I can’t definitively tell if these extra reverse lamps are set up to act as corner reverse lights, and it seems to change with the various styling changes to the rear bumper skin over the years. 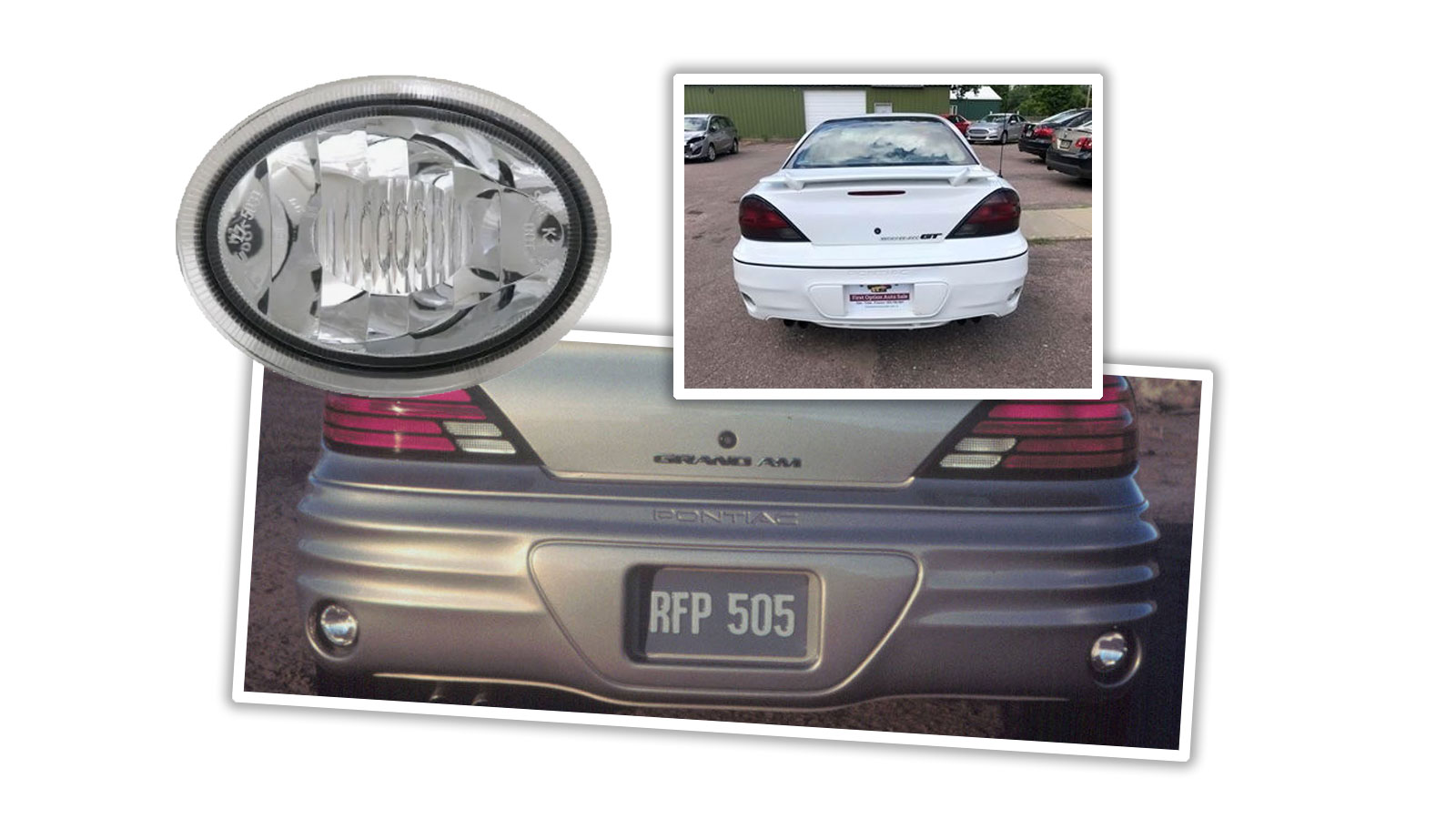 Some versions of the bumper skin really do seem to point the lights out to the corners, and the light unit itself does seem to be designed to throw light laterally, based on the reflector design and lens fluting. The most compelling argument for the side-corner reverse light function, though, is what GM calls the part: 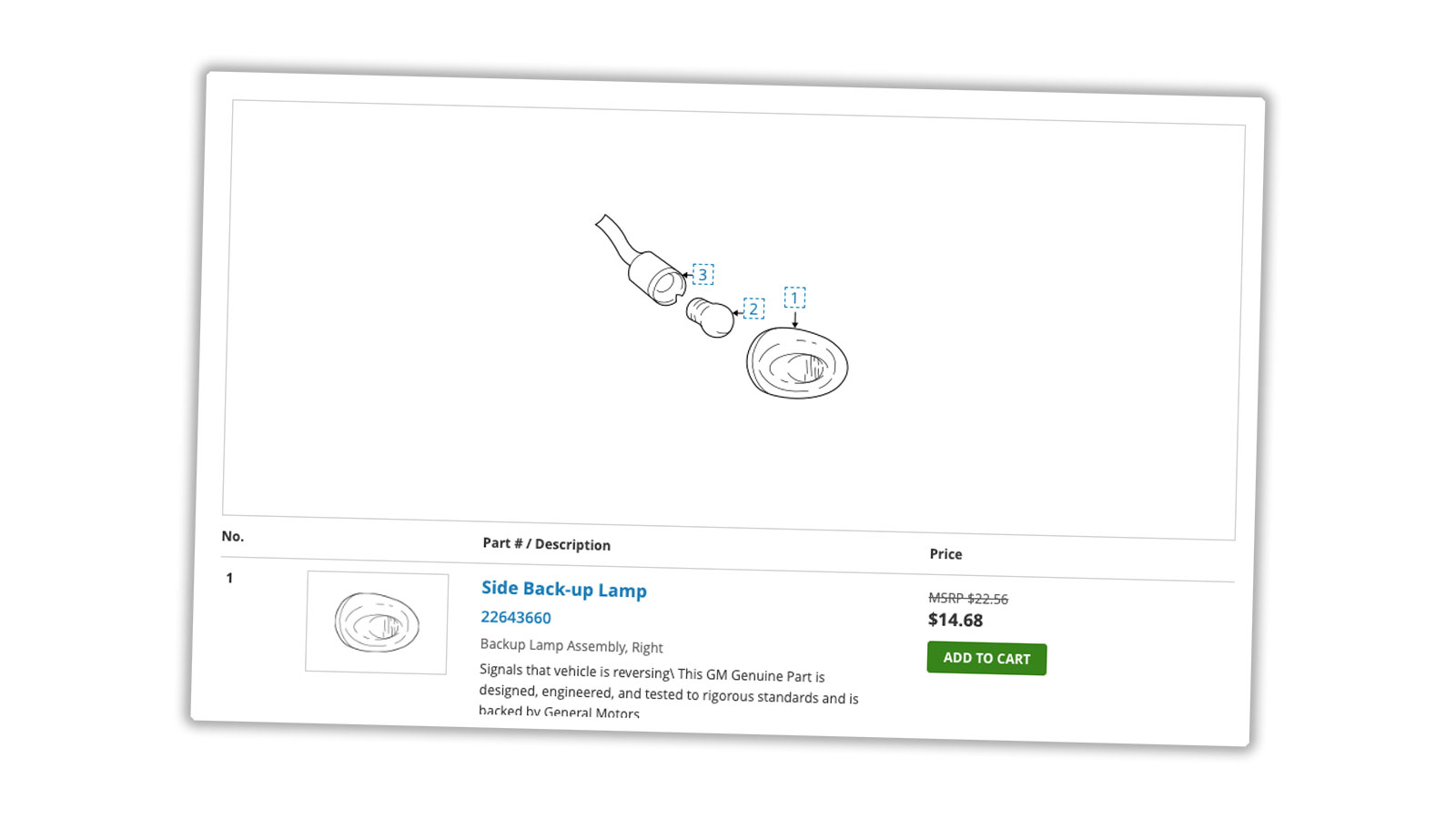 See that? “Side Back-up Lamp.” That feels pretty definitive, right? A backup lamp for side use! Mystery solved, right?

Well, maybe not. Advocates of the “they did it to send us a message” camp showed me soggy pictures of other variants of the bumper skin where it looks like the lamps are too far inset into the bumper and too removed from the corners to be effective at lighting up the sides: 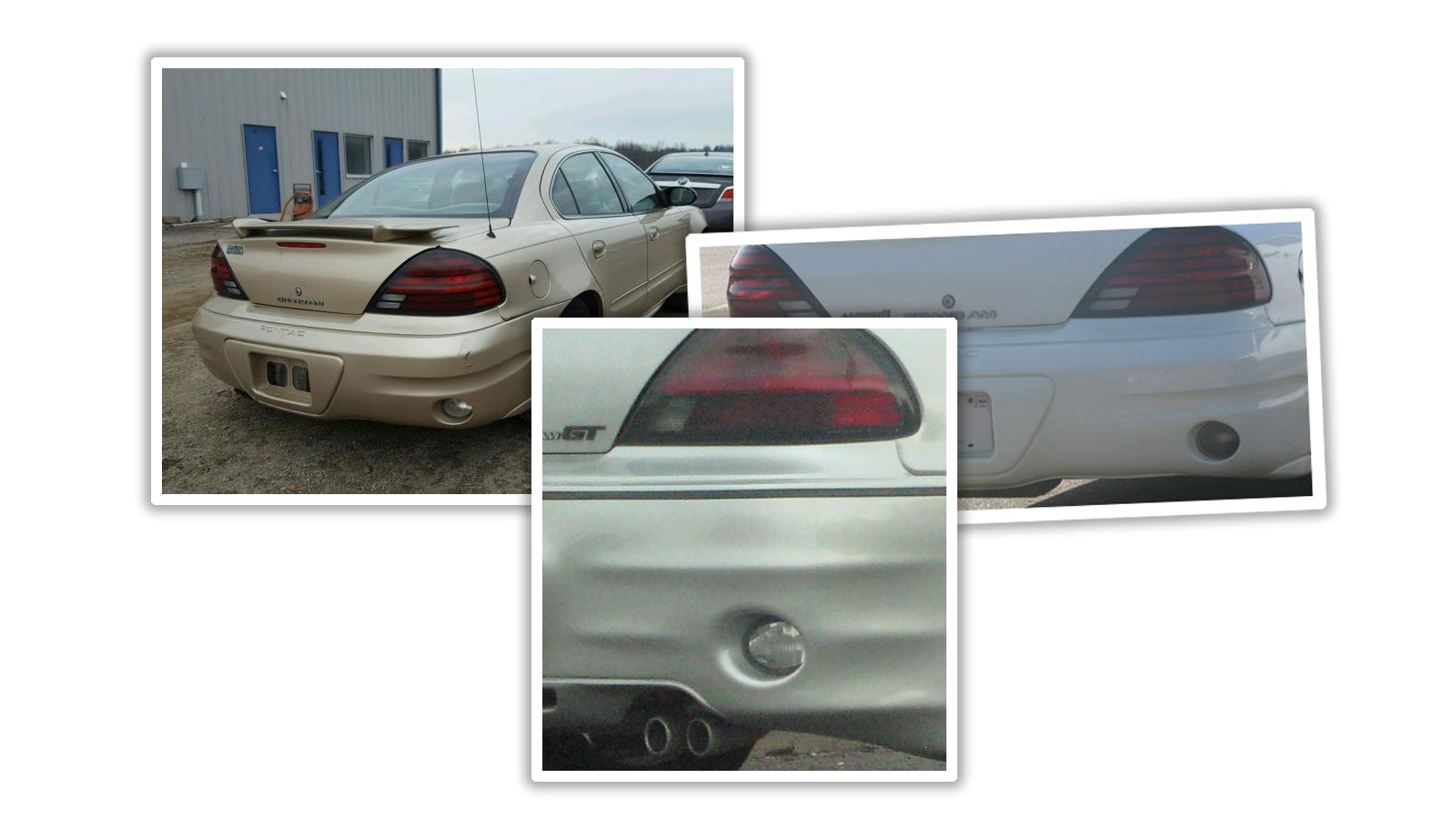 While I see what they’re saying – some of these are quite inset and likely would have a lot of their lateral light blocked by the bumper cover itself, I personally think that’s just a case of sloppy design as opposed to the alternative, that they weren’t intended to be side-illuminating reverse lamps.

I understand the Backlighters’ need for acceptance and approval, and I’m sympathetic. But, ultimately, I think these aren’t just ridiculous redundant reverse lamps, but are intended to have the additional function of casting light on those tricky rear corner areas.

Either way, these reverse lamps put the Grand Am into a very exclusive class of cars that actually take the time to go above and beyond for reversing light needs, and I think the Backlighters should simply be happy about that.

They should also not serve nachos in a steamy tent, but I’ll pick my battles, I guess.

I'm a co-founder of the Autopian, the site you're on RIGHT NOW! I'm here to talk to you about taillights until you cry and beg me to stop, which I absolutely will not. Sorry. Hug? Also, David's friend.
Read All My Posts »
PrevPreviousThis New Pilot’s Incredible Highway Landing Is A Perfect Lesson In Handling Emergencies
NextHere Are All The Details On The Hyundai Ioniq 6 That Weren’t Available When It Leaked Last MonthNext