Facebook-f Twitter Instagram Rss
Menu
Menu
Home » The Key To Getting A Cheap Car Right Now Is To Chase The ‘Ugly Stick,’ And The Chevy HHR Is The King

The Key To Getting A Cheap Car Right Now Is To Chase The ‘Ugly Stick,’ And The Chevy HHR Is The King 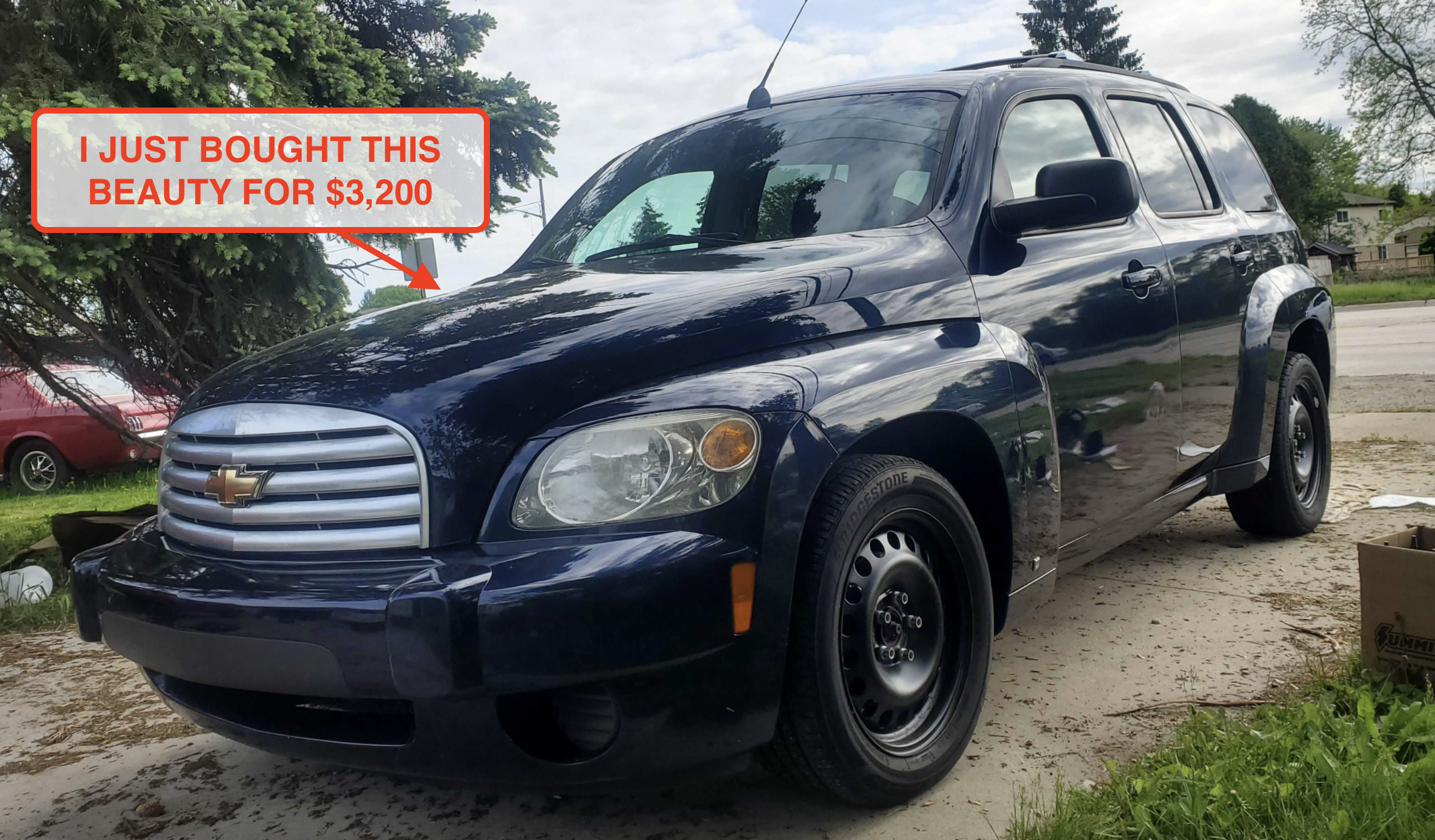 Right now people are overpaying for cars. If you want something from this millennium with under 150,000 miles and devoid of major mechanical or cosmetic issues, expect to pay at least seven grand. If that car has a Toyota or Honda badge on it, you might as well cash out your 401K. Lucky for you, you don’t have to partake in this used car feeding frenzy, because the vehicle you need is the one nobody else wants: It’s called the “Ugly Stick,” and the undisputed King of the vehicle category is the Chevy HHR. Here’s a look at the one I just bought.

An “ugly stick” is exactly what it sounds like: an ugly car with a stickshift. It’s an undesirable. An untouchable. An outcast. Think Chrysler PT Cruiser, Saturn Vue, Dodge Caliber, and of course, Chevrolet HHR.

These cars are almost immune to fluctuations in used car values, because even if the Manheim Used Vehicle Value Index jumps by 20 percent, 20 percent of zero is still zero. Yes, these cars are basically worthless, and not for any logical reason, either. They’re actually quite good, but because of the irrational nature of car ownership, people want nothing to do with them.

The way a car looks — and the message it communicates — is as important to the layperson as reliability and safety, and the cars I just mentioned communicate weirdness. Even though we here at The Autopian champion weirdness, most people prefer not to stray too far outside of “normal” lanes, so they stay far, far away from these quirky contraptions. Add a manual transmission, which most Americans are incapable of driving, and you’ve got vehicles that very few looking for a used car right now would even consider. It was this logic that led me to purchase the $3,200 Chevrolet HHR you see in these photos. 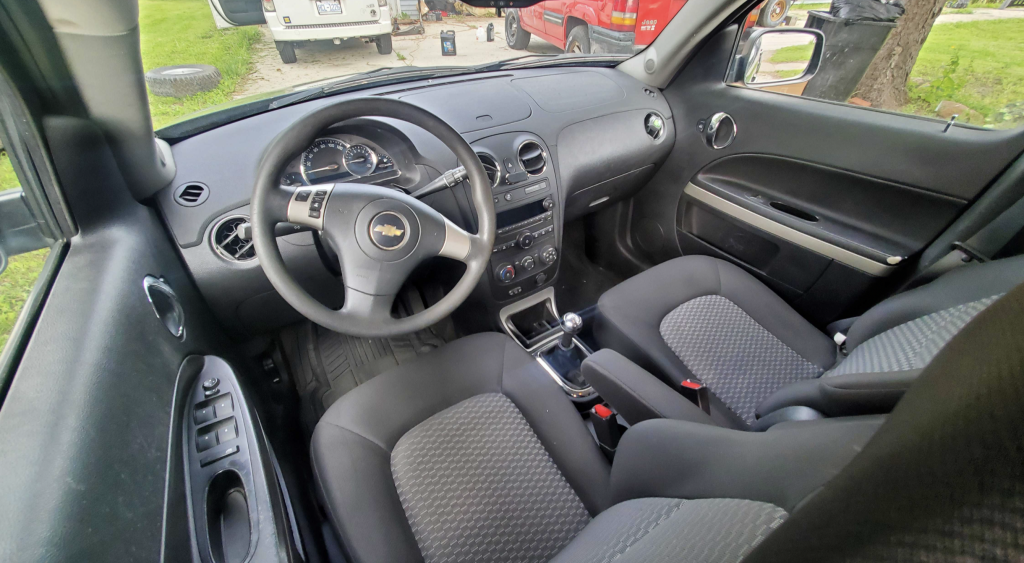 Tom McParland, car-buying guru at Jalopnik, texted me recently that his Stellantis friend was looking for a car for a colleague who had just arrived in Michigan from France. As the colleague would only be stateside for 18 months, the vehicle had to be cheap. I volunteered to help, especially since the French gentleman called me and told said he was paying $300 a week for a rental car. Ouch! He also threatened to buy a 2012 Chevy Equinox for $7,000, a 2016 Chevy Cruze for for $7,650, a 2011 Jeep Patriot for $6,495, a 2011 Dodge Journey for $6,300, and a 2013 Jeep Compass for $6,500 — half of these cars are mechanical nightmares waiting to happen (thanks largely to bad automatic transmissions or engines with known maladies) and half were just priced too high. I couldn’t stand for it.

The ‘Ugly Sticks’ On The Market

While searching Facebook Marketplace, I kept my eye out for the best “ugly sticks” out there. I’m always on the lookout for 2.2-liter Ecotec Saturn Vues equipped with the F23 five-speed manual (a great powertrain combo if you get a 2005 to 2007, since these years were less prone to timing chain issues): 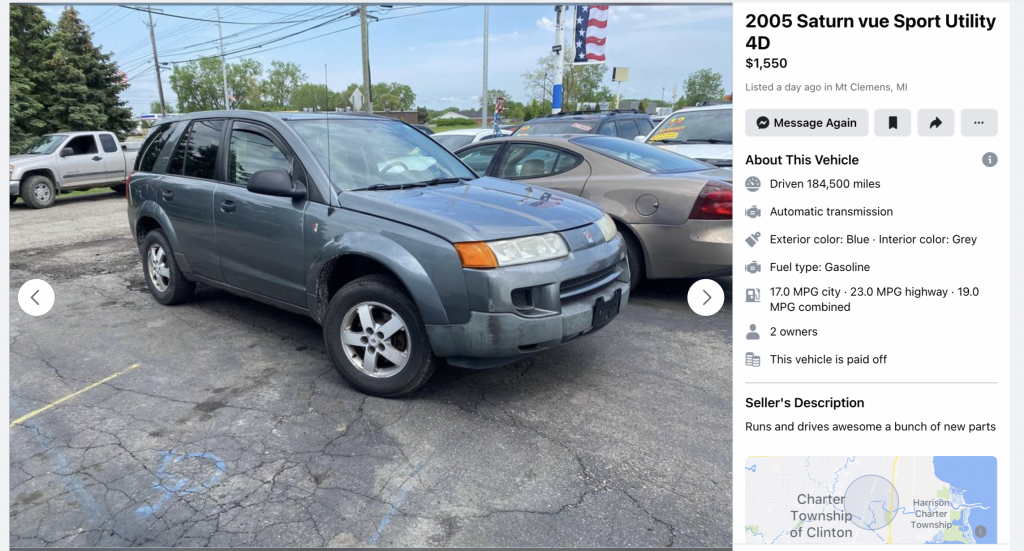 There’s the Vue’s sibling, the Ion, which is equipped with the same powertrain: 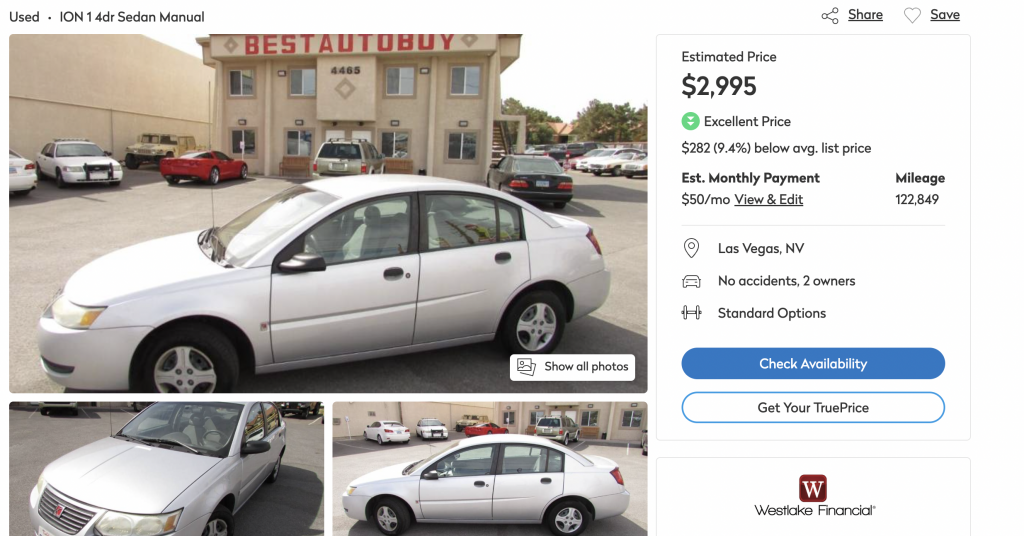 A good option is the manual Chrysler PT Cruiser, which is equipped with a stout (but not particularly efficient) 2.4-liter inline-four:

The Dodge Caliber, maligned for its awful CVT transmission and cheap interior, could be had with a decent five-speed manual hooked to a reliable 2.0-liter “World” engine; you’d have to deal with the hard-plastic interior until 2010, when Chrysler refreshed the interior: 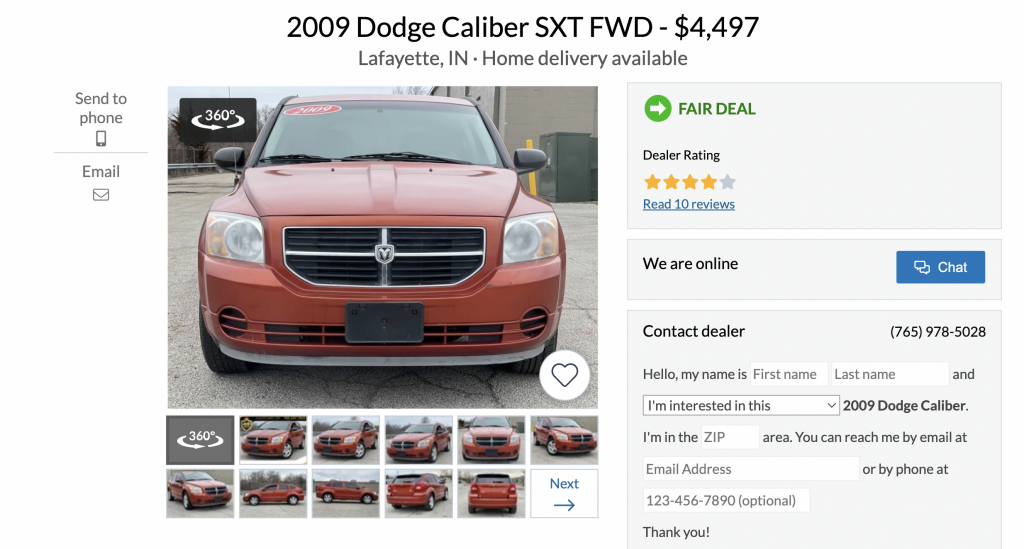 A little less ugly, but still dated are the Ford Escape or Ford Fusion, both of which came with the indestructible Mazda MZR engine and decent five-speed stick. Either of those are good options (the rebuilt title Escape with crazy high mileage is of course, only a good option if you need really, really cheap transportation and can do your own maintenance): 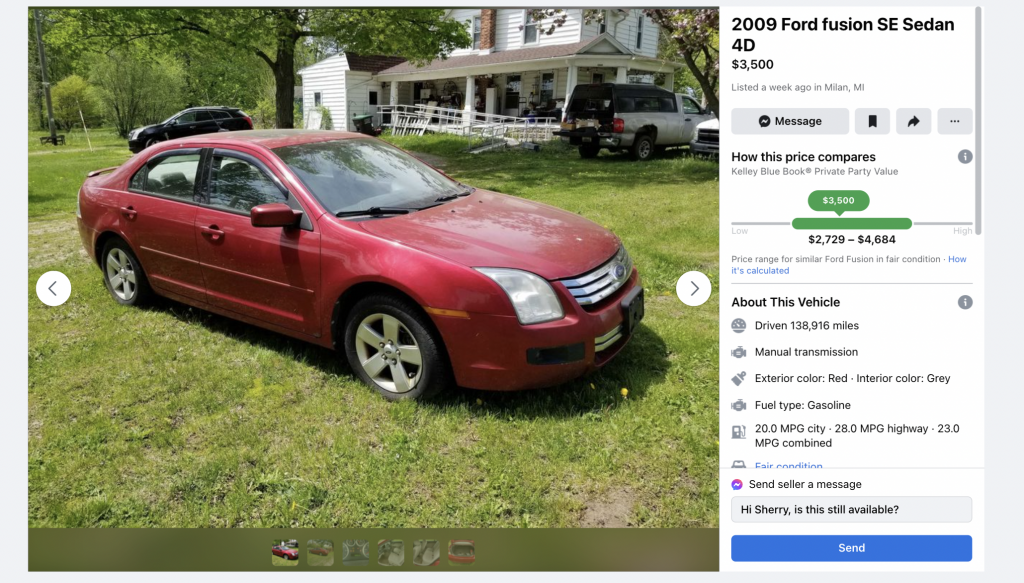 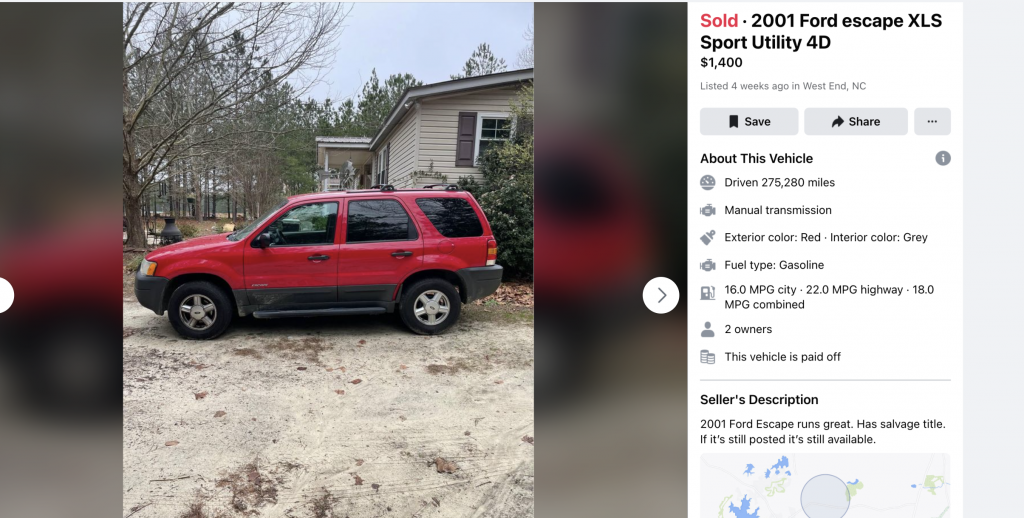 But the holy grail of this “Ugly Stick” category is the Chevy HHR, because it’s relatively new, practical, efficient, and unkillable.

The HHR Is The King Of The ‘Ugly Sticks’ 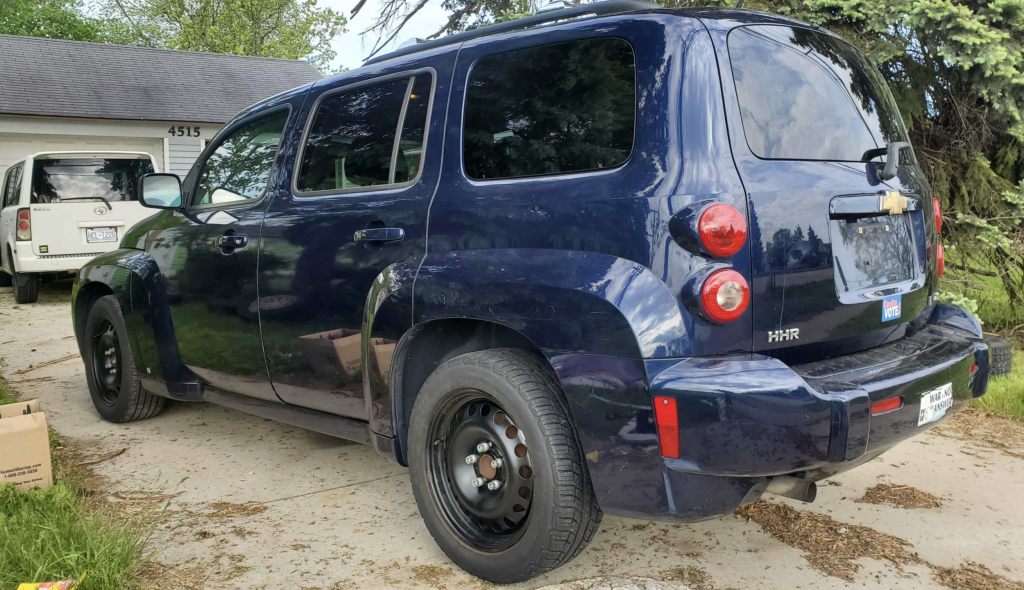 Just look at the condition of this thing! It’s almost like a brand new car. The Ecotec engine is the same one my dad put over 200,000 miles on in his 2005 Saturn Vue, which had the same Getrag five-speed. It’s a combo GM put in many of its small cars, including the Saturn Ion and Chevy Cobalt, with which this HHR shares a platform. 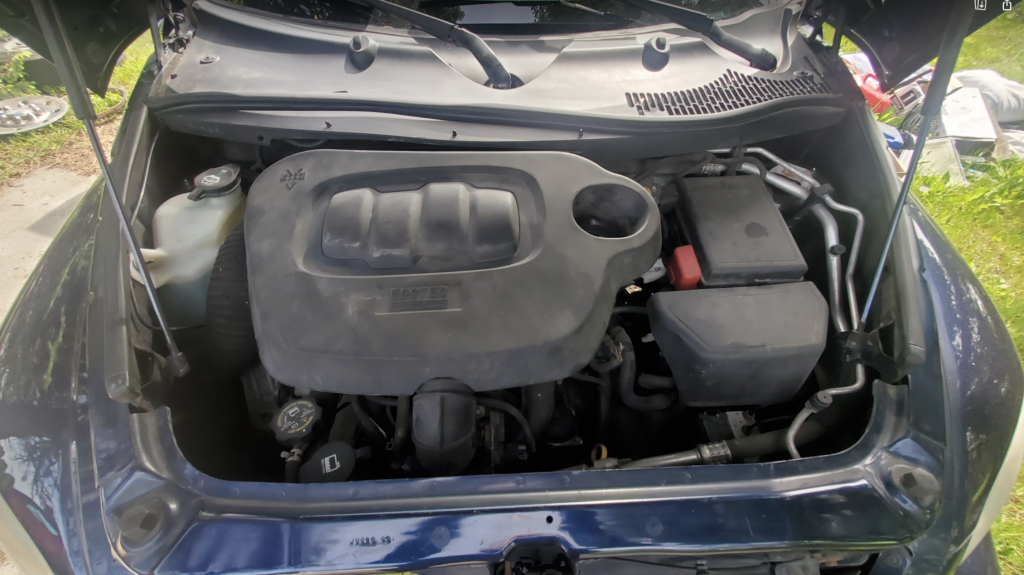 Much like how Chrysler turned its Dodge Neon into the Chrysler PT Cruiser, Chevy turned its Cobalt into the HHR (the two cars were both styled by designer Bryan Nesbitt). The result is a vehicle built on cheap bones and with a small, efficient engine. Fuel economy for the HHR is 22 MPG city, 32 MPG highway, 26 MPG combined — better than any other “ugly stick” car I’ve mentioned except the smaller Saturn Ion. Again, the HHR is the undisputed king of the category, and therefore the best deal in cheap cars in 2022. 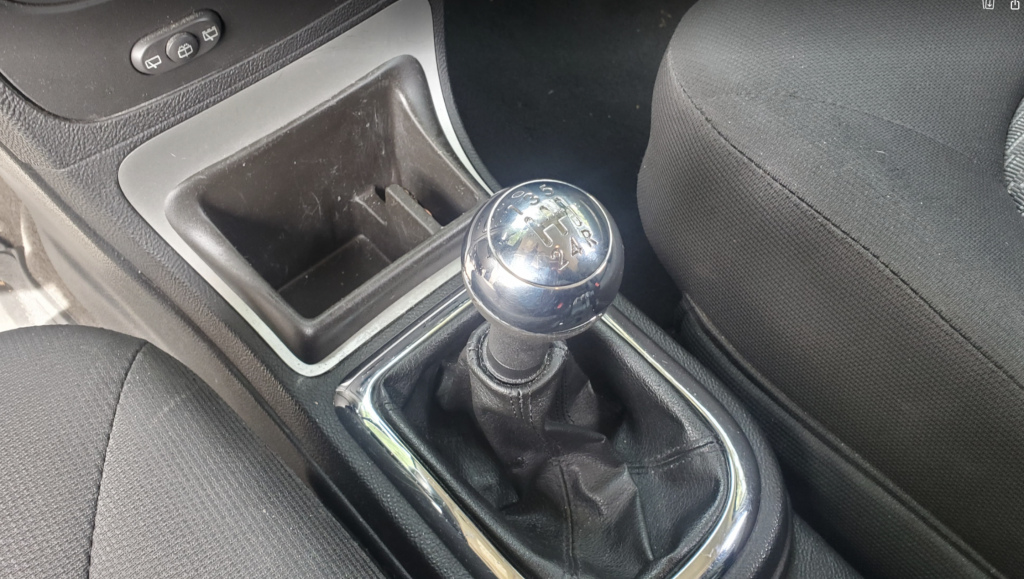 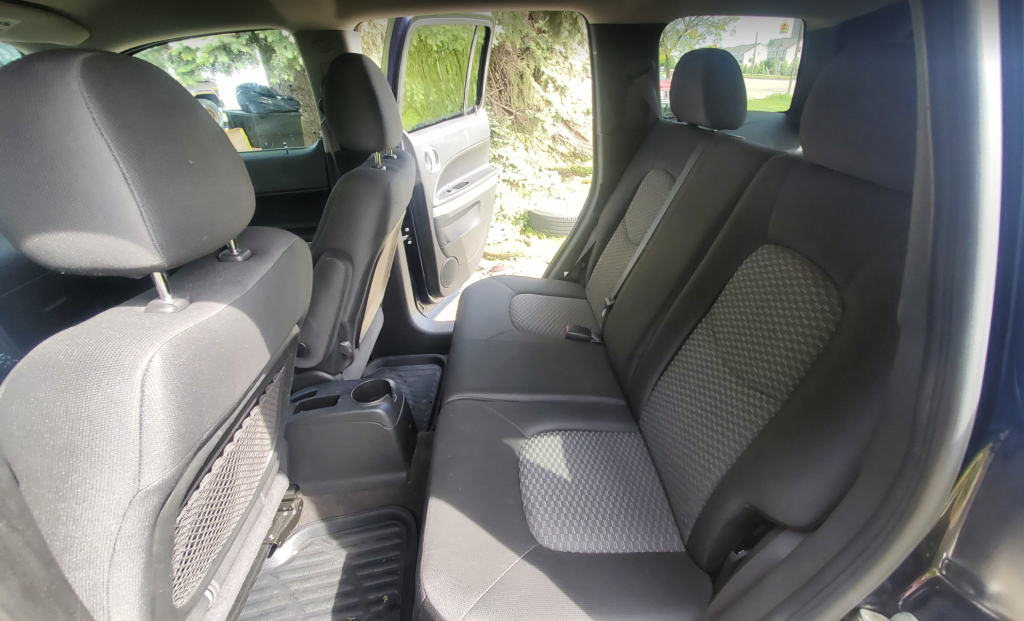 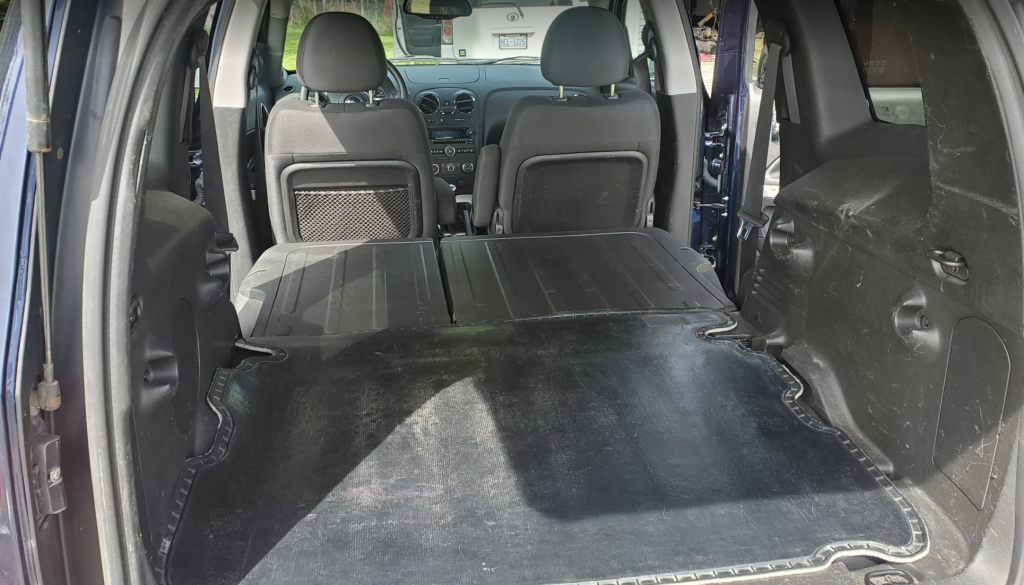 Sitting in this thing, it feels modern. The interior styling is fairly nice, the car drives smoothly, the shifter is actually decent (even if first gear feels far too tall), and theres a ridiculous amount of room. Sure, visibility could be greater, but who cares — I bought a car that feels almost brand new for only $3,200 (I negotiated down $500). And what’s wild is that you can, too. These things are dirt cheap:

And let’s say you buy that 153,000 mile 2007 model in Warren for only $2,500 (that’s an automatic, which I don’t recommend out of principle, though if you must, just know that it is a GM 4T40-series four-speed that will likely hold up quite well, as it is the same as the one found in the Pontiac Grand Am that we here at The Autopian think is a great option for those of you looking for something absolutely bargain-basement cheap), but you don’t like the scuffed rear bumper. No worries: The junkyard is full of HHRs to snag cheap parts off of: 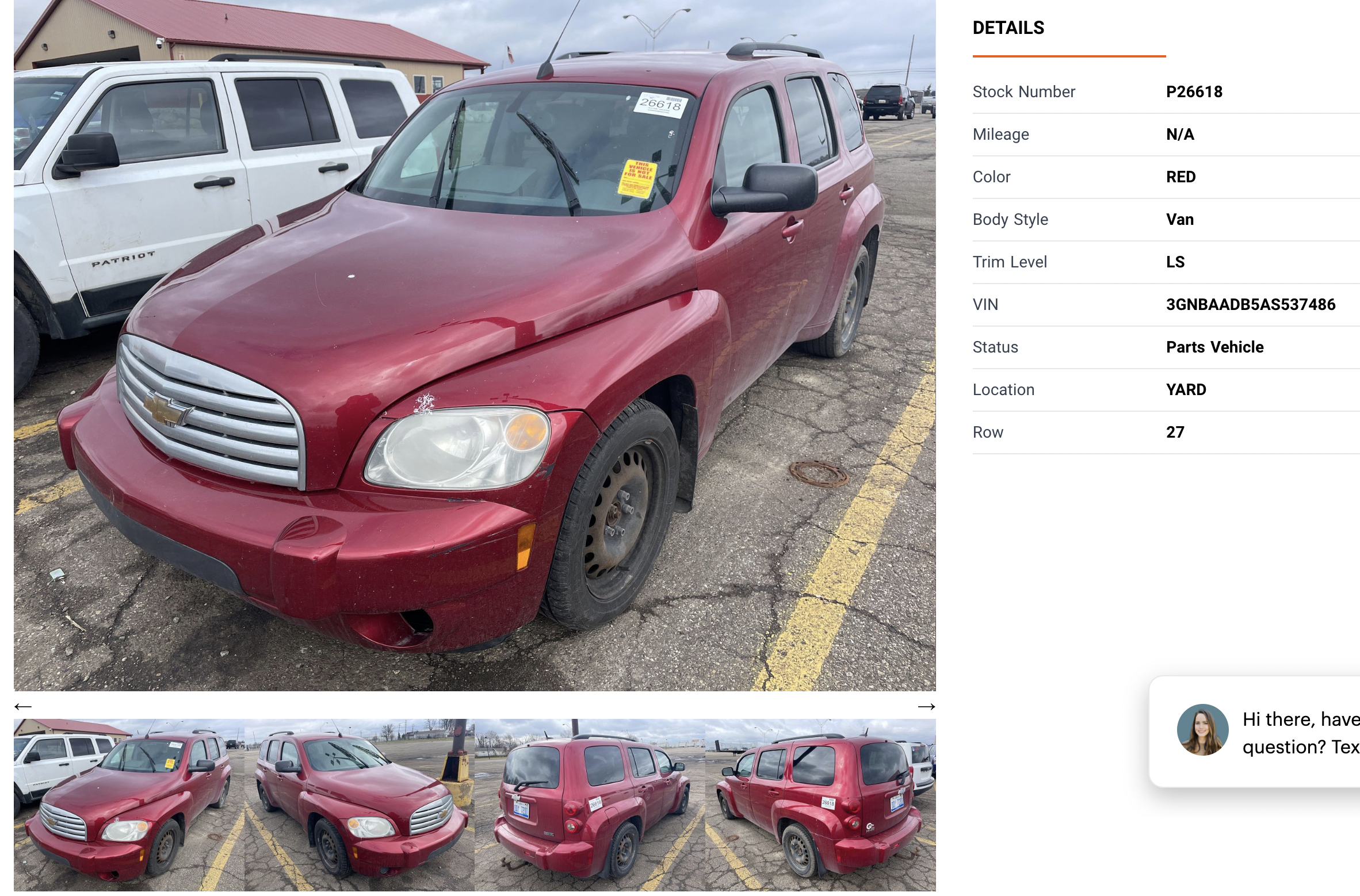 Here’s What’s Wrong With My HHR 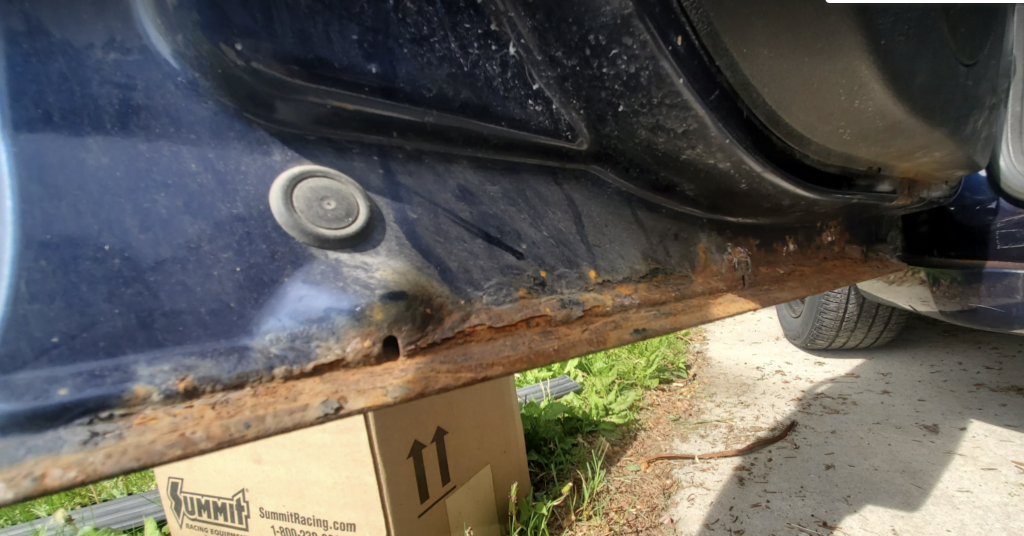 The HHR I bought isn’t perfect, of course. There’s a bit of rust on the bottom of the doors; I’ll just grind that down and paint it. I bet it’ll look good. And there are a few paint blemishes here and there: 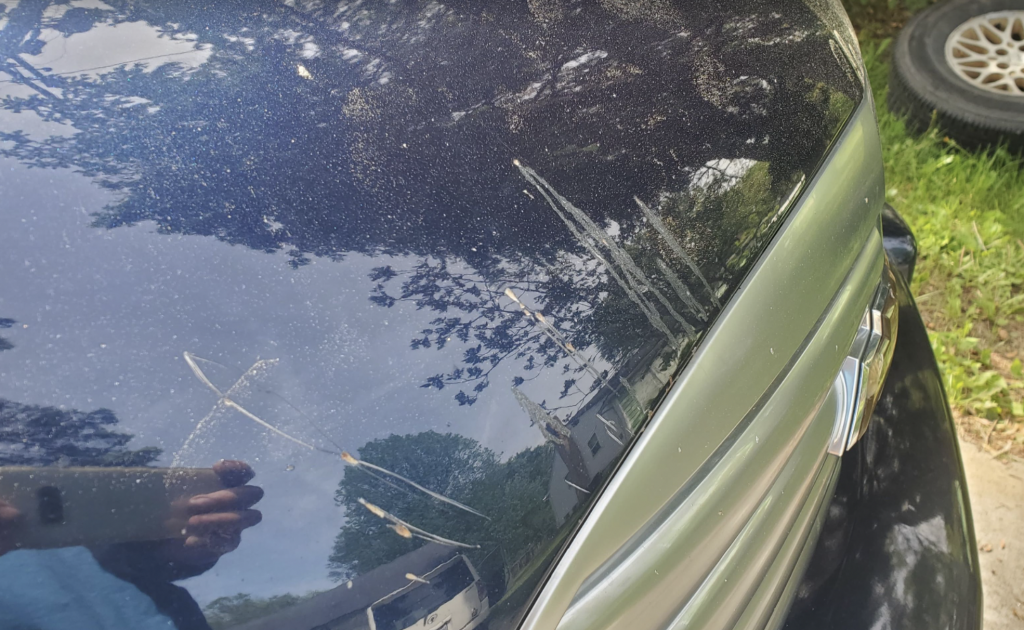 And there’s a little bend in the front bottom corner of the passenger’s side door. I think something must have have been jammed between the door and the sill, and when someone went to open the door, that object bent the corner a bit: 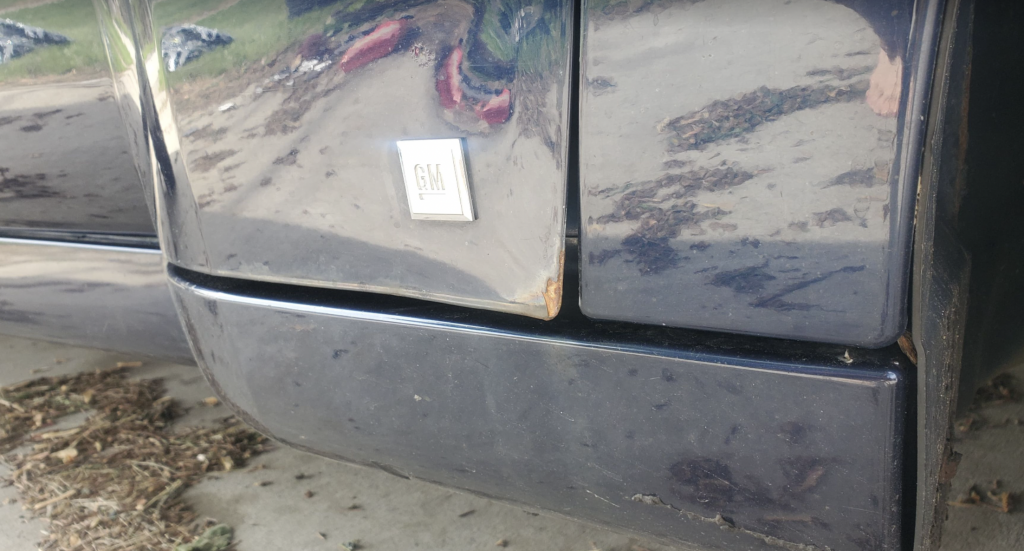 But otherwise, this thing is in great shape. It’s reliable, safe (it comes with side curtain airbags), efficient, practical, fun to drive, and for $3,200, unquestionably an amazing deal. As Mercedes Streeter, once a proud HHR owner, once wrote: The Chevy HHR Is A Better Car Than You Remember. That’s absolutely correct, but it’s not likely to change many minds, as most folks will take one look at it and say “nope.” What that means for the rest of us is an amazing deal on a great new-ish car.

Rust-loving Jeep man, cofounder and EIC of The Autopian, Jason's friend. Email: david@autopian.com
Read All My Posts »
PrevPreviousNice Sensible People-Movers: 2003 Honda Odyssey vs 1996 Chevy Suburban
NextThe Used Car Market Is Getting Weirder Than A Sword-Swallowing Unicyclist Rolling Up To Applebee’sNext