There are so many wonderful car shows and gatherings of interesting cars on our wet little planet that it makes me realize that explaining why the Pebble Beach Concurs D’Elegance is different or interesting or worthwhile is something important to do. I say this because I’m not sure it’s obvious to everyone, but I think the car David Tracy and I are talking about in this video is a great example of what makes the whole overdone affair so special. Because this car, and cars like it, are very, very special. This is the 1948 Talbot-Lago T26 Grand Sport Figoni Fastback Coupé.

Here, you should watch the video, and stay for the end, because it’s a tiny payoff, but somehow a huge one, too.

I actually wrote about this very car right when we got back because I just couldn’t help myself. This strange and beautiful machine, as much sculpture as car, as much organic-looking as mechanical, as much unreal as real, had a deep effect on me, a feeling that I feel deep in my chest, an ache of appreciation and something that feels like longing but very much isn’t, because its the opposite. It’s a feeling of something that’s being fulfilled because you’re in the presence of something, feeling a concept from another human’s mind and hands, an idea fed directly via the medium of an object.

I feel this way when I stand in front of a Rothko, or under a Calder stabile, or after reading something particularly moving. The feeling is absolutely real, and you can see me feeling that feeling in this video up there.

The reason I’m feeling it is thanks to the coachbuilders of Figoni et Falaschi, Italian brothers who started a carrosserie in Paris in 1935, with Ovidio Falaschi handling the business side and the wildly talented Giuseppe Figoni handling the creative side.

Figoni designed bodies for all sorts of carmakers over the years, but it was Figoni’s adoption and development of the goutte d’eau – drop of water – design language and styling philosophy that really changed things. Here’s an early example of the style, applied by Figoni to a 1936 Delahaye 135M Competition Coupe: 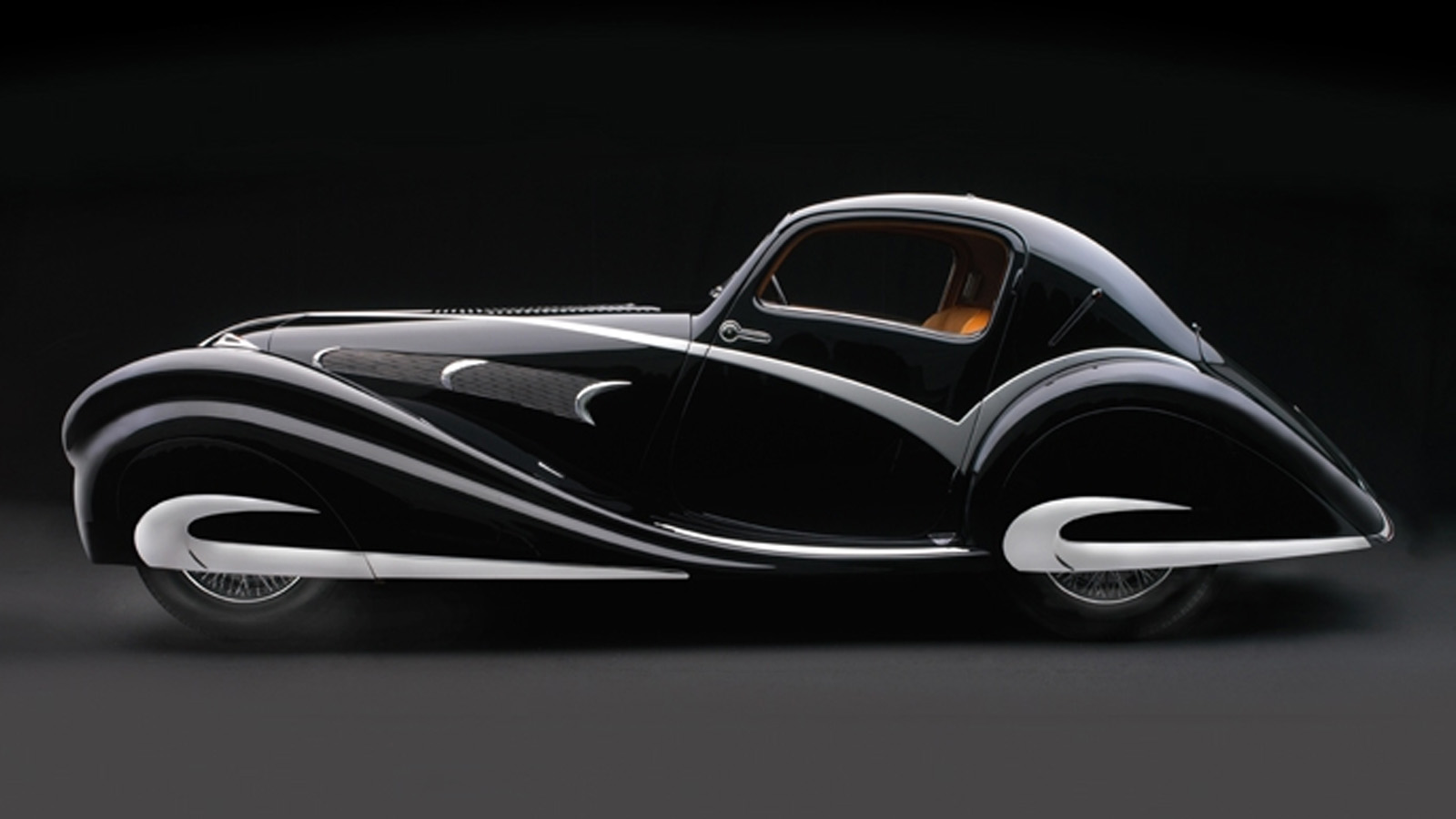 Sure, the ideas of scientific aerodynamics are mixed around in there, but let’s be honest: This is design based on drama, on emotion, on the strange way a line and a curve can affect how you feel, and it leans in, hard, to the unknowable magic of that. It teeters on caricature in pictures sometimes but in person it’s a sensual gut punch right in your beauty glands.

Figoni’s cars built for Talbot-Lago chassis continued and developed the look, like on this 1937 Talbot-Lago T-150C SS20: 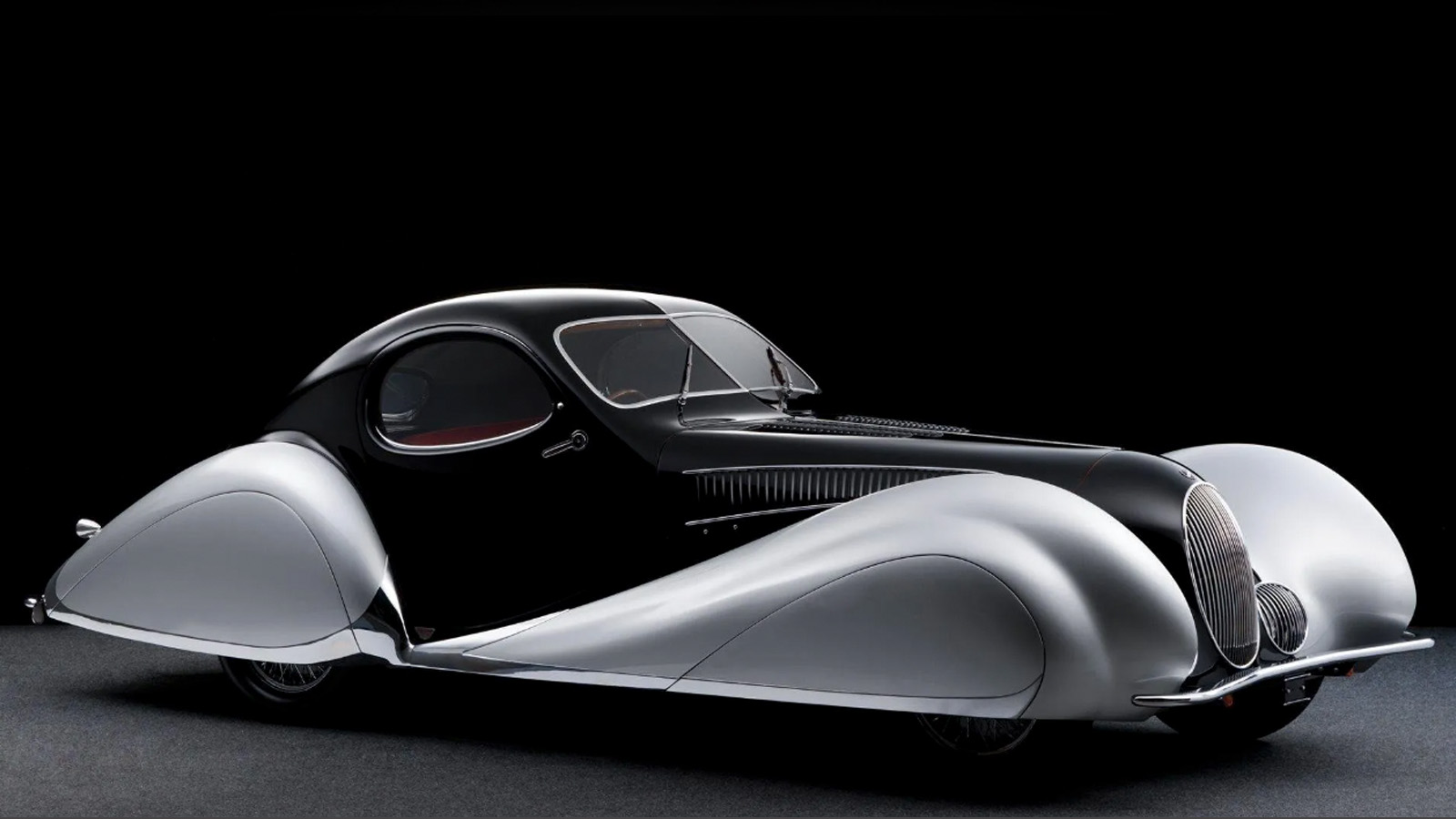 These cars become ethereal things, growing stranger and more beautiful and edging away from the visual language of cars and more into the sculptural language of artists like Henry Moore or maybe Isamu Noguchi. Whatever they are, they’re stunning. 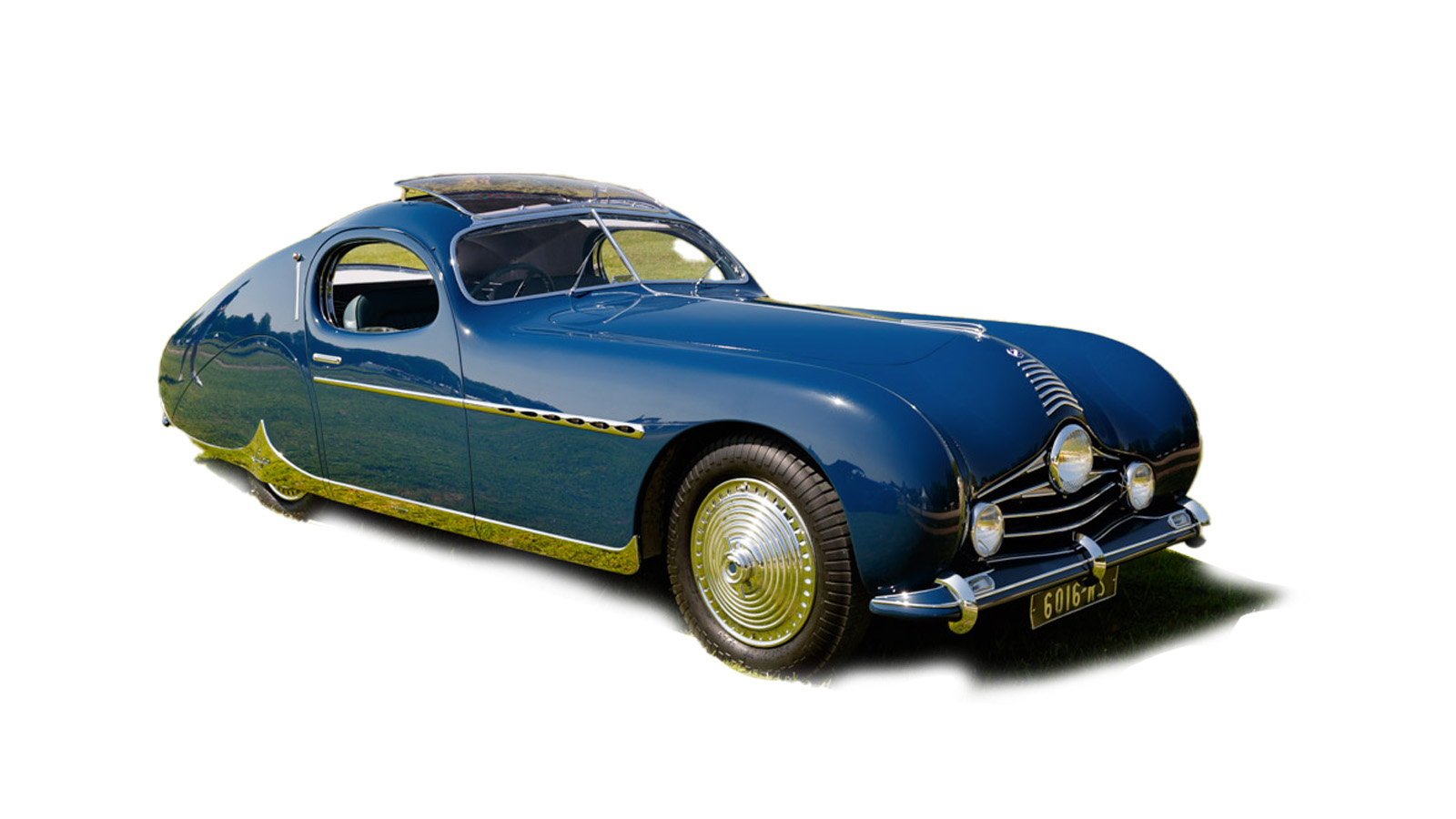 So, by the time 1948 rolled around and the car David and I are losing it over was built, Figoni had been pushing this design language a while, which is why I think this particular car feels so confident and strange and glorious.

It was made for France’s Zipper King, a Mssr. Fayolle, the man who was zippers in postwar France, which is why the car has those distinctive chrome bands that are meant to evoke a zipper: 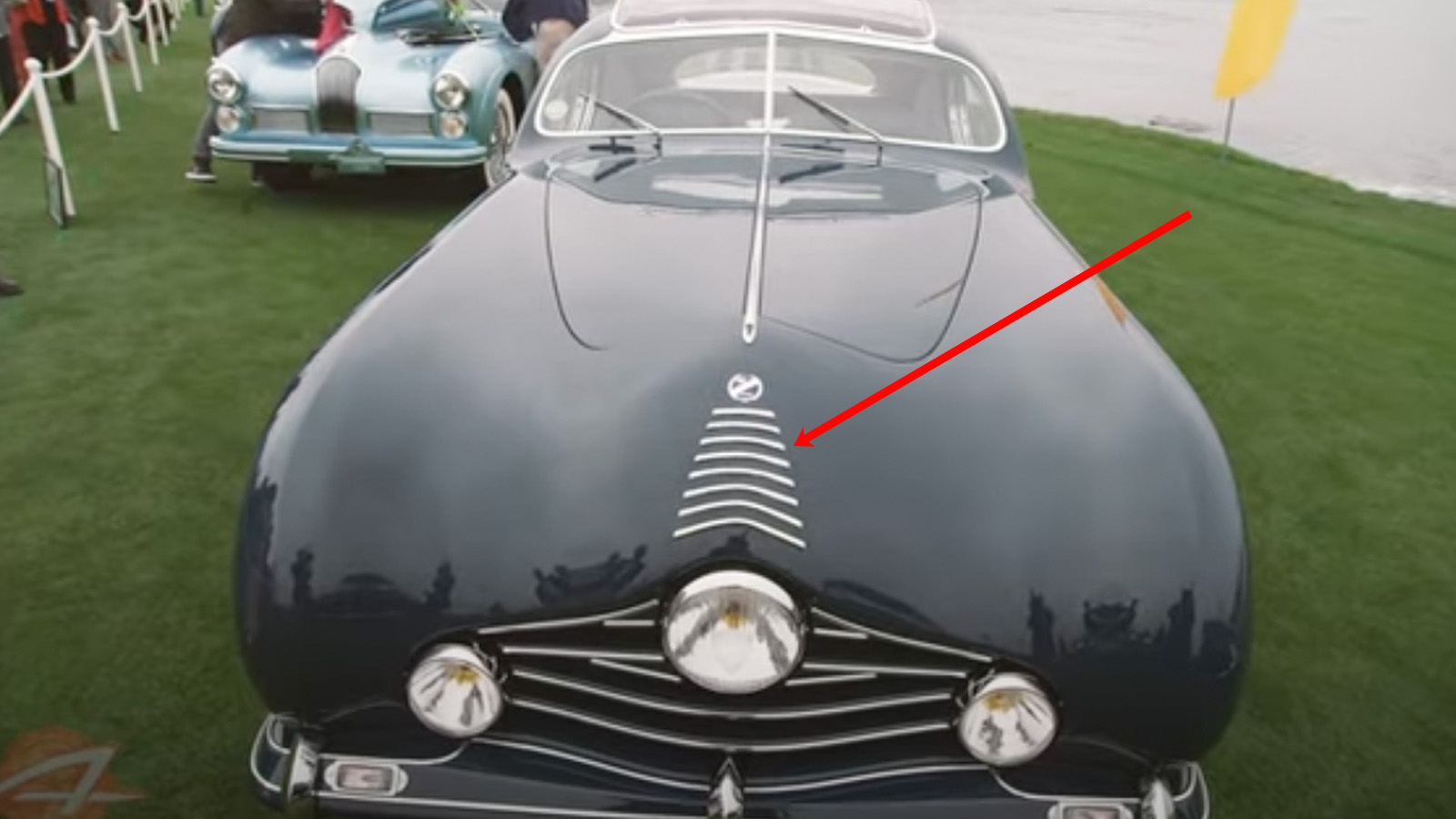 Figoni’s choices for this car – that cyclopean headlight, the long, languid curves, the pan-flute exhaust, the gleaming chrome jewelry, the overall flow and presence of all of it, it all feels otherworldly, slightly aquatic, but still simply dazzling. This car intoxicates, and I wish you could all feel it. 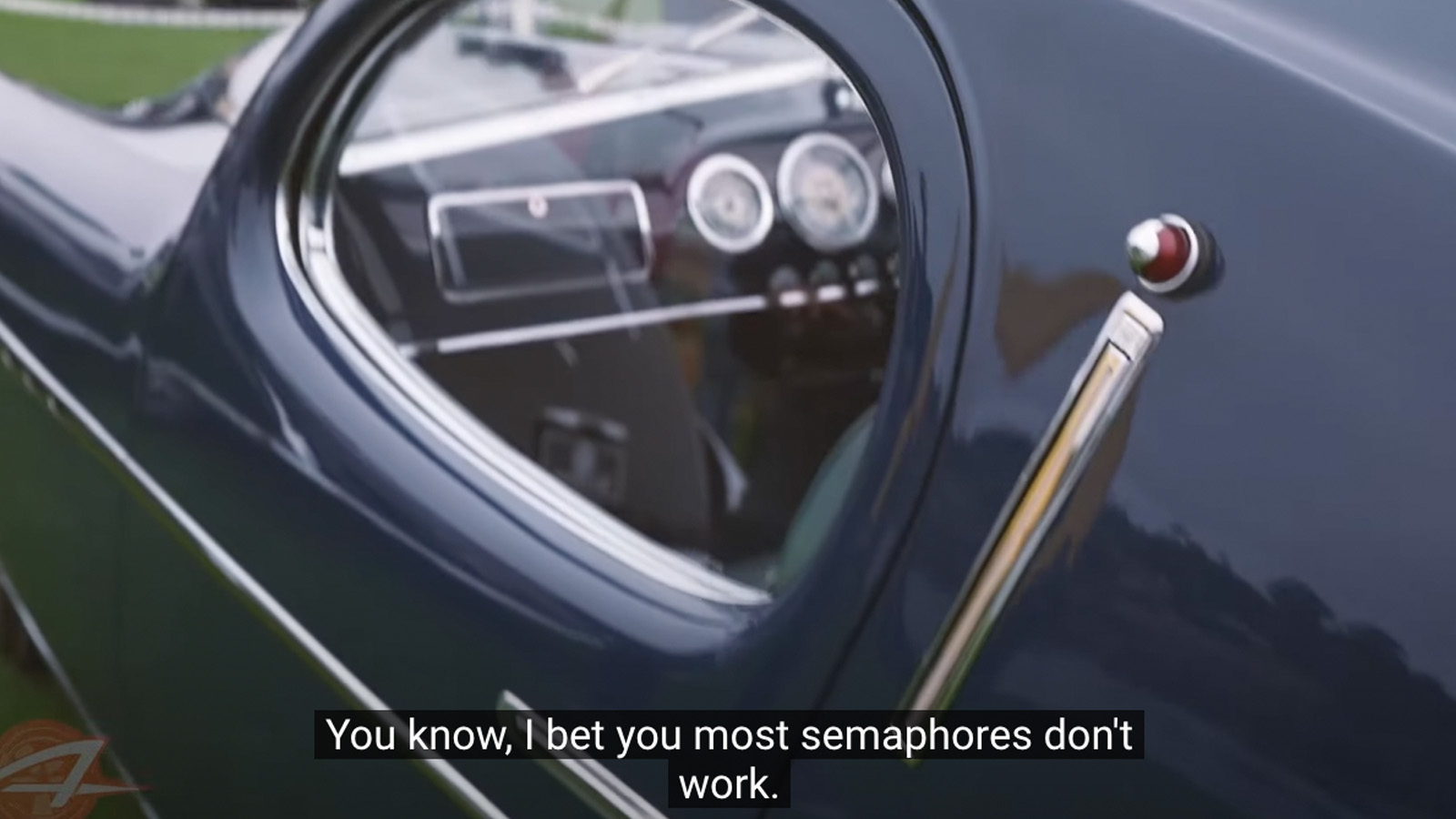 Of course, it also helps that it has semaphore turn signals. Sometimes called trafficators, these were little absurd, charming pop-out illuminated arms that European cars used between the 1920s or so and the 1950s. I adore them, which is why we asked if we could see them work on this amazing car, leading to the sort-of plot of this little video, which I won’t spoil.

The car’s owner, Robert, was an absolute peach to go through the efforts he did, too. And, he drives this thing! As he said, a car is for driving, after all.

Even a car as incredible and peculiar and glorious as this.

I'm a co-founder of the Autopian, the site you're on RIGHT NOW! I'm here to talk to you about taillights until you cry and beg me to stop, which I absolutely will not. Sorry. Hug? Also, David's friend.
Read All My Posts »
PrevPreviousThe Kollter RS1 Wants To Give You Lots Of EV Bike Range For Less Money
NextExploring Exciting Overseas Versions of One Of America’s Least Exciting CarsNext