The Most Expensive Cadillac Ever Is Over $300,000 And It’s An EV Called Celestiq

If there’s one thing that people have been complaining about for years, it’s that Cadillacs don’t cost enough. For too long people have been forced to purchase new Cadillacs and have the possibility of still owning some money. Well, thankfully Cadillac, makers of the Cimarron and other cars, has solved this problem for you with the introduction of its new flagship, the Celestiq. With incredibly limited hand-built production (think one per day, with a maximum of six vehicles being built at once) this colossal, dramatic, tech-laden new Caddy will start at prices over $300,000 and possibly much, much more as the car can be customized to buyer’s preferences to an extremely high degree.

The Celestiq is built on a very elongated (it’s longer than an Escalade) variant of GM’s Ultium EV car platform, which sits underneath cars as varied as the upcoming Honda Prologue and the new GMC Hummer EV. While the specifics of the Celestiq’s drivetrain haven’t been fully revealed, it’s likely the motors and power electronics will be similar to the Cadillac Lyriq’s, at least in some way. 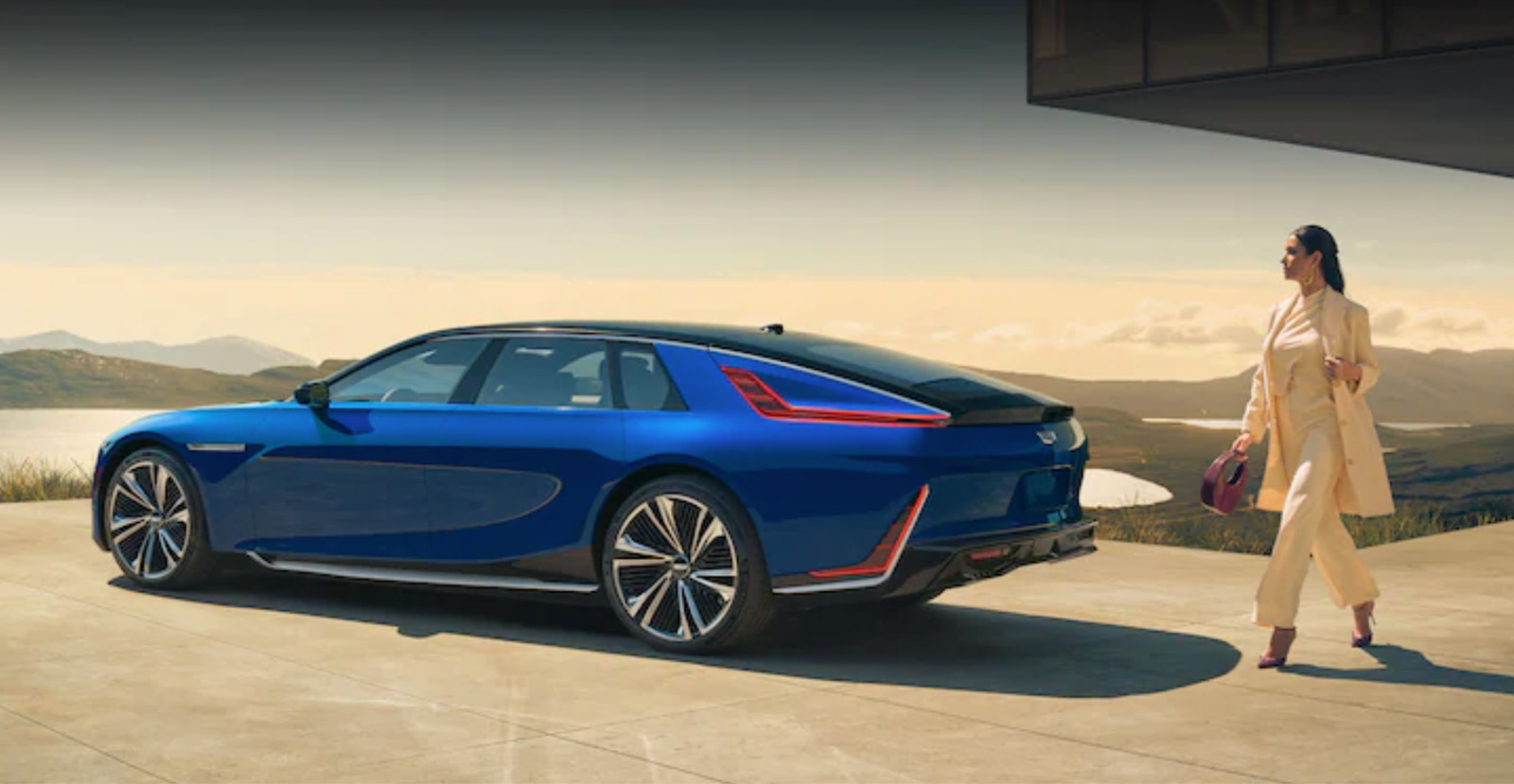 The Drivetrain And Charging

Cadillac did provide some basic specs about the drivetrain, performance, and range:

This dedicated EV propulsion architecture combines a 111-kWh battery pack and a two-motor, all-wheel-drive propulsion system to offer a GM-estimated 600 horsepower and 640 lb-ft of torque — and a GM-estimated driving range of 300 miles1 (483 km) on a full charge.

Unique among Ultium-based EVs are CELESTIQ’s 11.59:1 front and 11.63:1 rear gear ratios, which were specially calibrated to optimize range and performance. In addition to the impressive horsepower and torque, the vehicle is also projected to deliver one of the quickest 0-60-mph acceleration in the segment of 3.8 seconds.

Like the legendary Cadillac’s of old, it seems the Celestiq is focused on a specific sort of ride comfort, the kind that feels like you’re being whisked along on a mattress made of marshmallows and optimism, the kind that let you go over a speed bump at 51 mph in your Sedan DeVille in 1967 and not spill a drop of the old fashioned you had in your hand, next to your cigarette.

This level of comfort is accomplished with a lot of tech like this:

The Celestiq has a 200 kW DC fast charging system, and Cadillac claims 78 miles of range can be added in 10 minutes, via an appropriate fast DC charger. 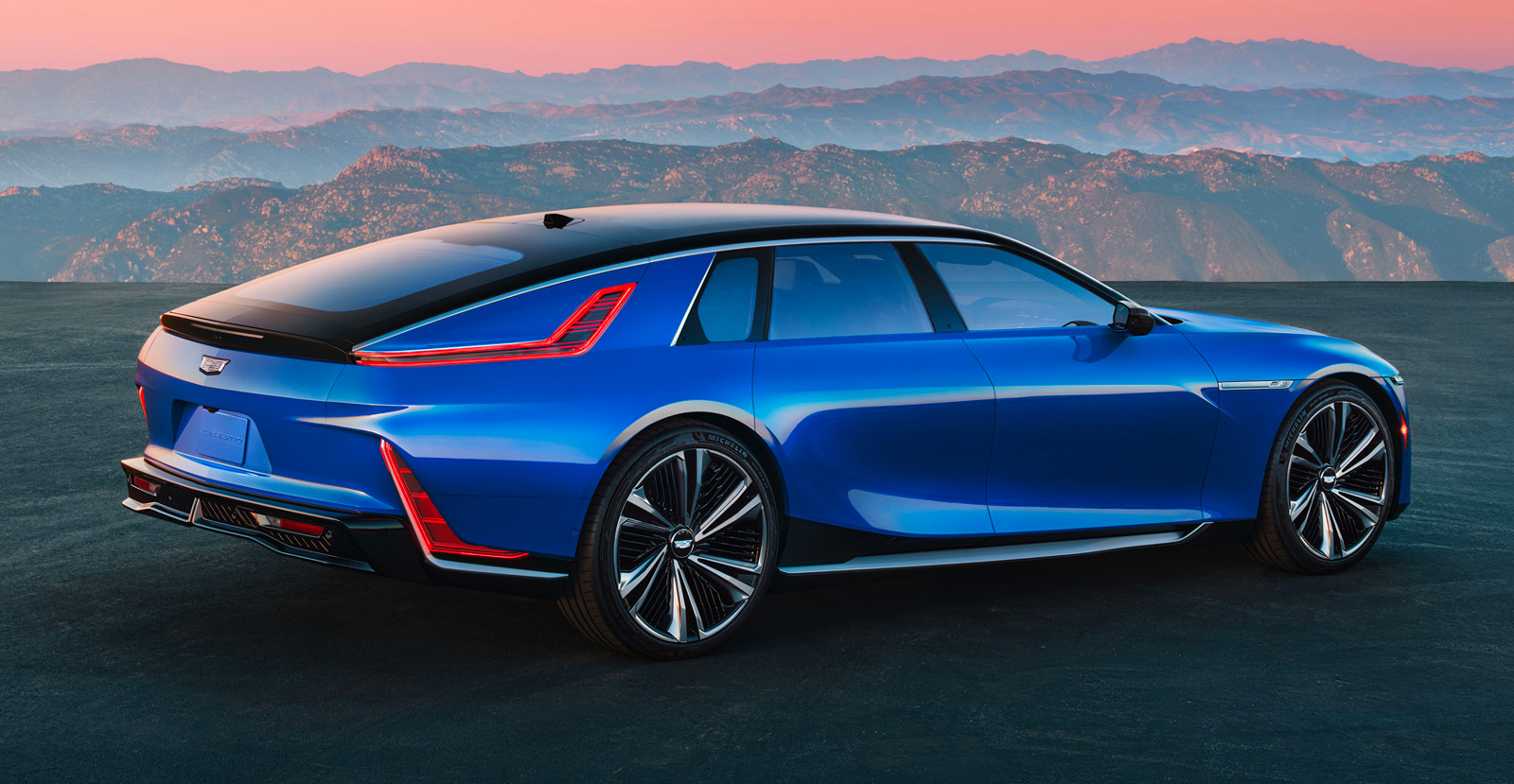 Of course, it’s the design of the Celestiq that’s getting everyone excited, partially because that’s all we can really experience at the moment and partially because it is quite striking. It’s a long fastback design, an interesting choice on its own, and there’s a lot of really arresting details, like the hockey-stick shaped taillights that they seemed to like so much they included an extra set, inverted and below, the long rear overhang, the simple window graphic, the novel herringbone not-grille front end, the dramatic lighting, you get it. 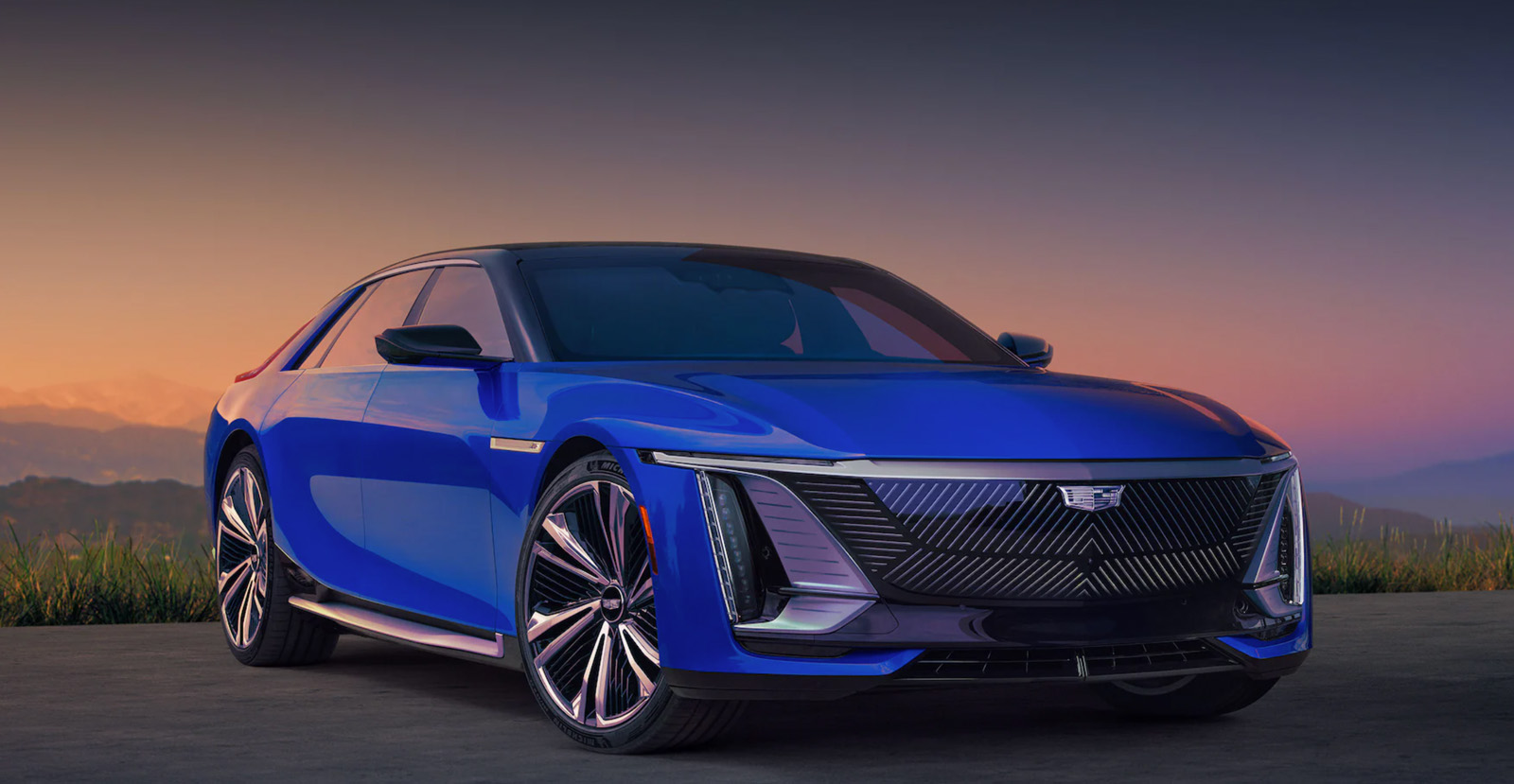 Whether or not you like it, you have to admit the thing has hectares of presence, something that will likely be even more imposing in reality when you’re confronted with the whole massiveness of it all.

This is, of course, very on-brand for Cadillac, which has been building massive slabs of presence for decades. The press release specifically mentions the 1957 Eldorado Brougham as an inspiration, and I think that feels pretty accurate. 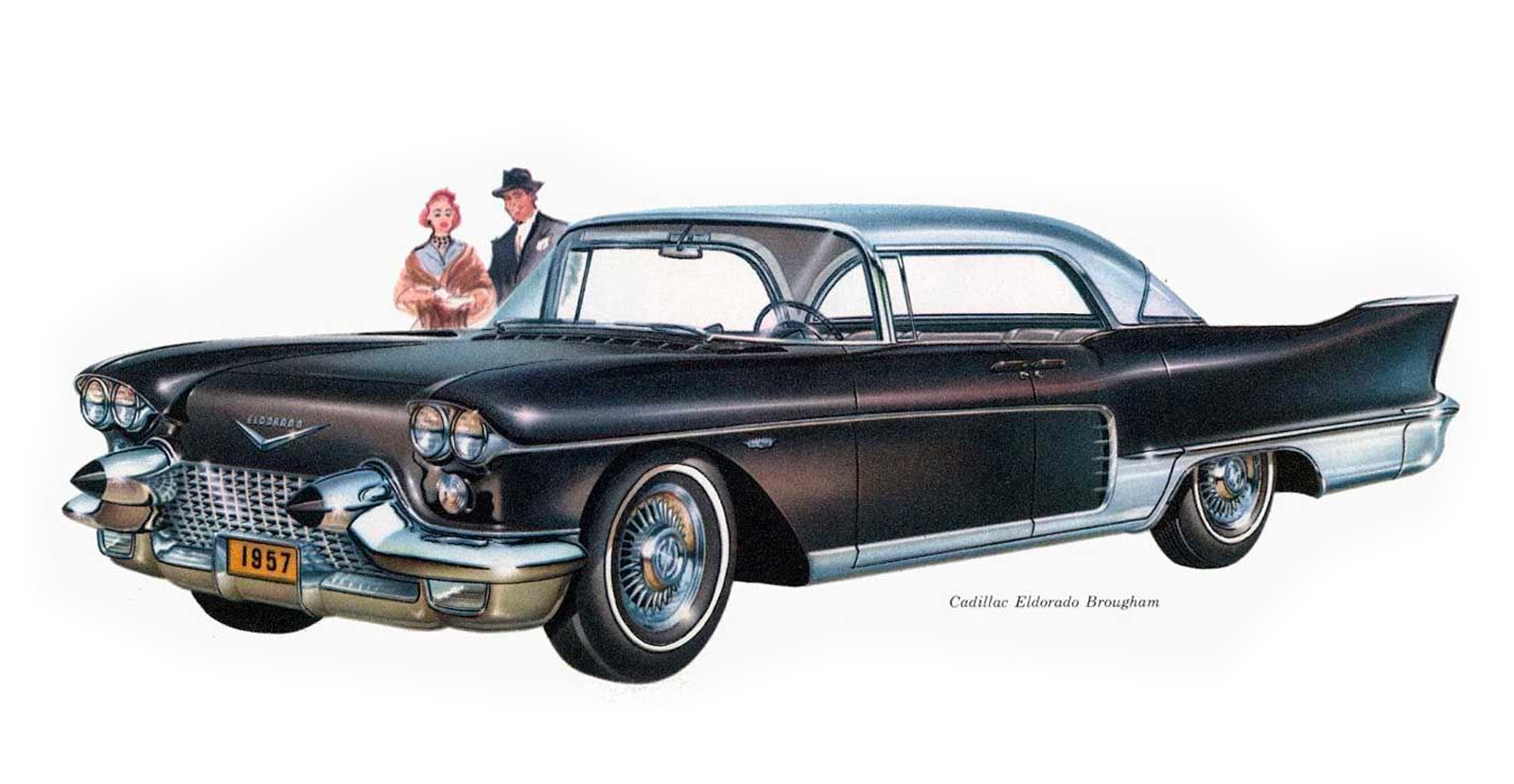 There are a couple of odd details, I think, like that jutting rear bumper that to me feels like a modernized, black version of the old El Camino/GM station wagon bumper with the inset taillights, and there’s a little swoosh of what I assume is a character line that kicks forward under the A-pillar that I haven’t decided if I like or not. Maybe I like it? I need to see that in person. 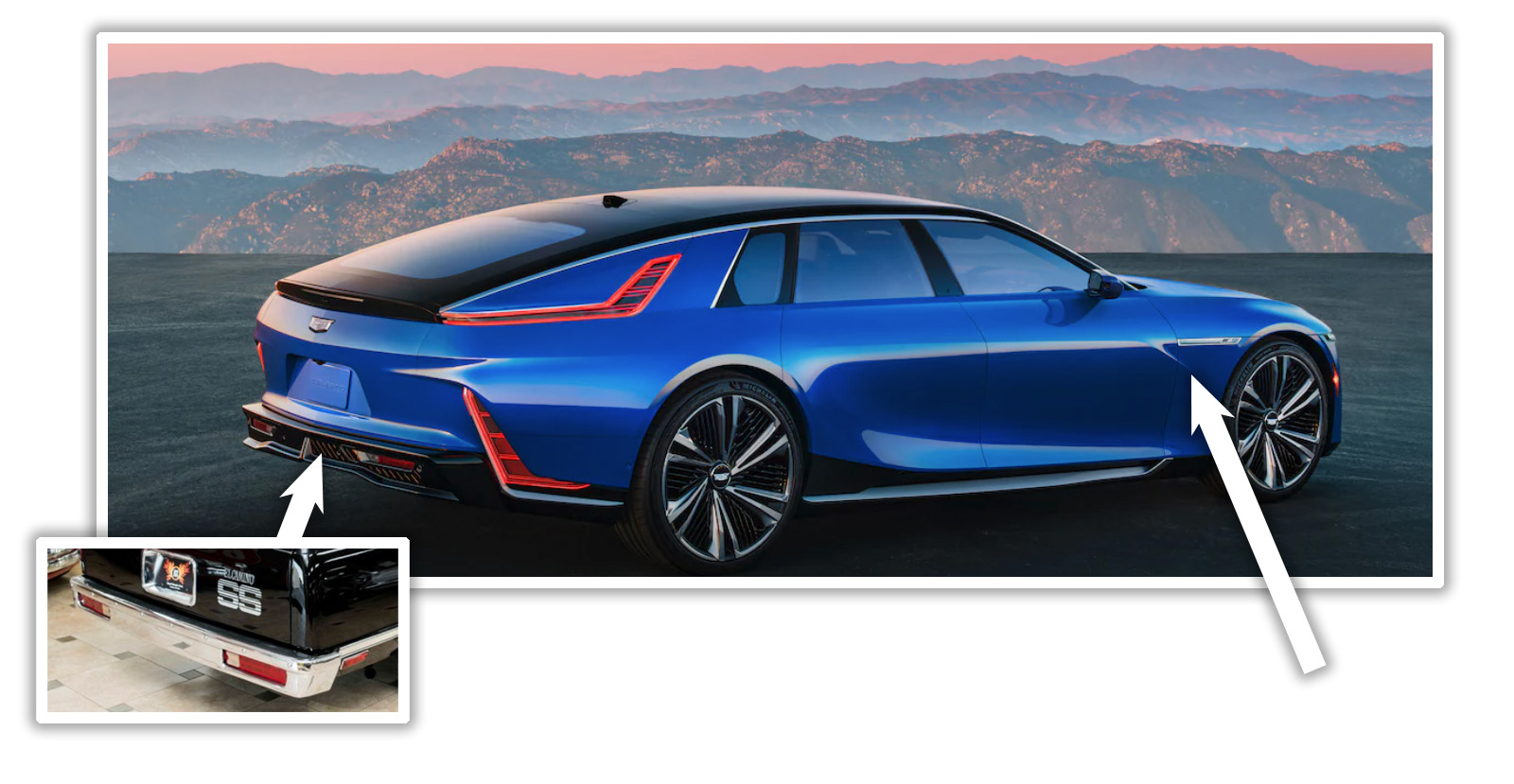 There’s one obvious thing that the exterior design of the Celestiq needs, and thanks to Cadillac’s promise of incredible levels of bespoke owner personalization, I suspect this should be possible. Here it is: 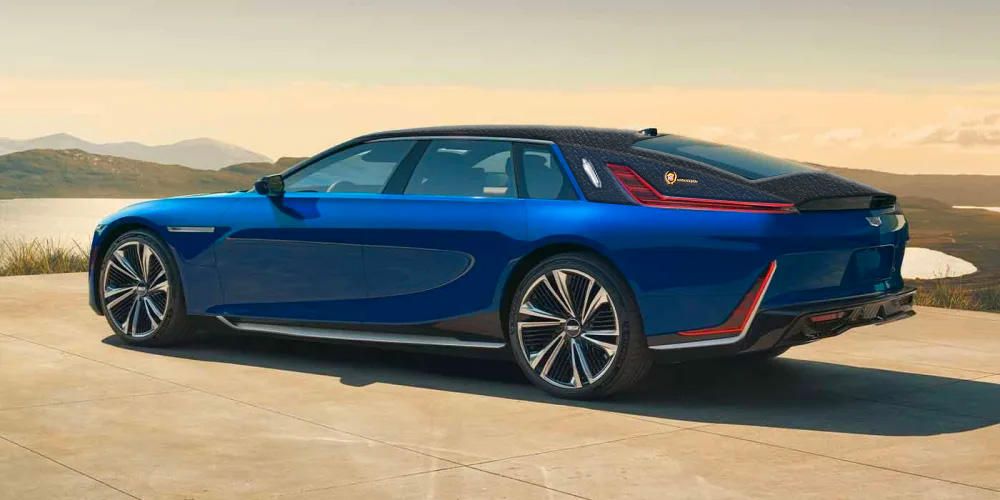 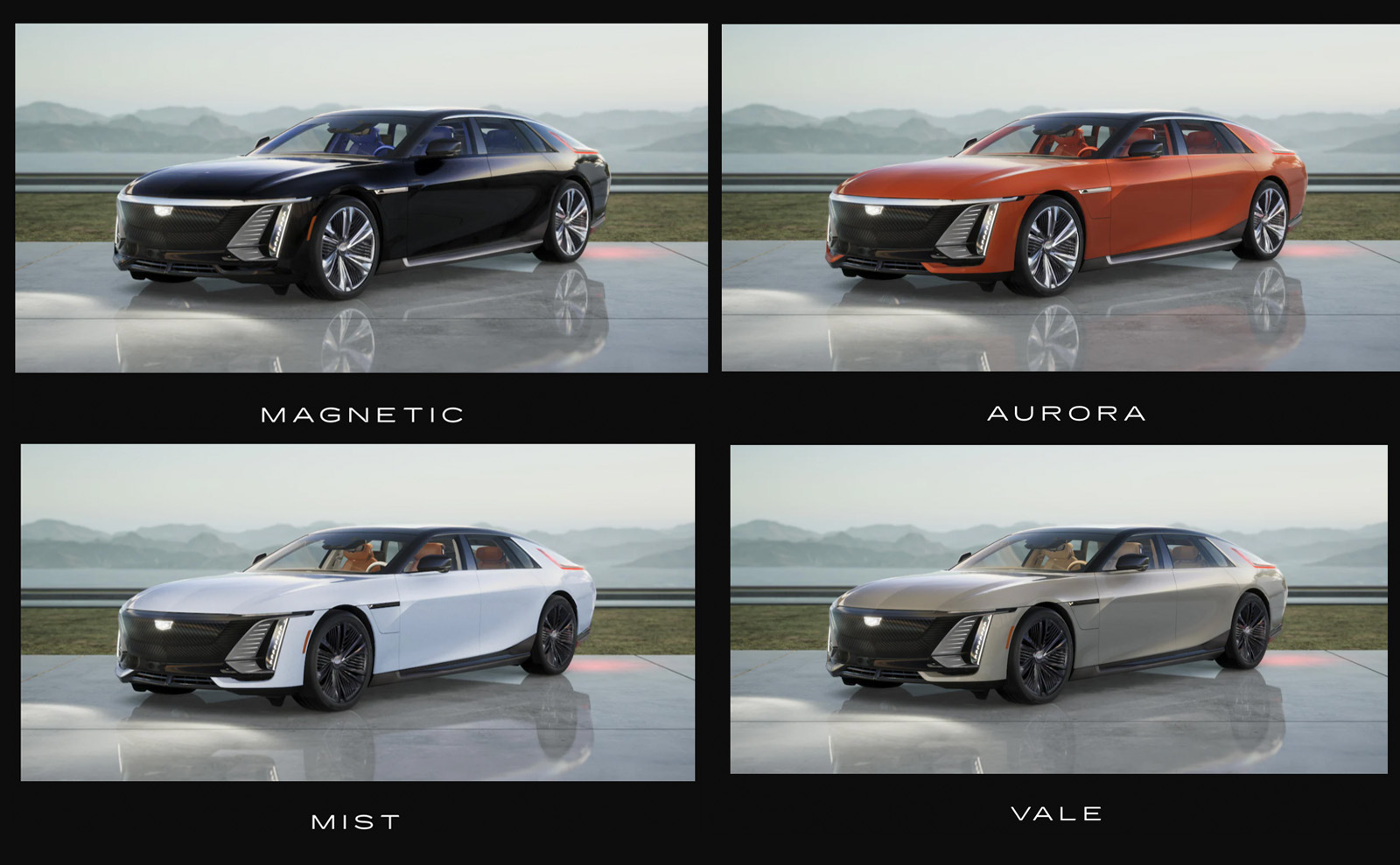 Color selection seems to be up to the buyer, but Cadillac did provide a few options, complete with absurd marketing-speak taglines. See if you can match which tagline is for which color:

“A look into the new millennium that channels the motion of sport.”

“An avant-garde view of traditions driven by visionary possibilities.”

“An ode to infinity inspired by the mystery of the cosmos.”

“Ultra-luxury minimalism reimagines movement as a state of rejuvenation.”

Oof, right? Here’s the answers, in the order I listed: Aurora, Mist, Magnetic, Vale. How’d you do?

The interior is, as you’d expect, absurdly luxurious. And pretty huge. 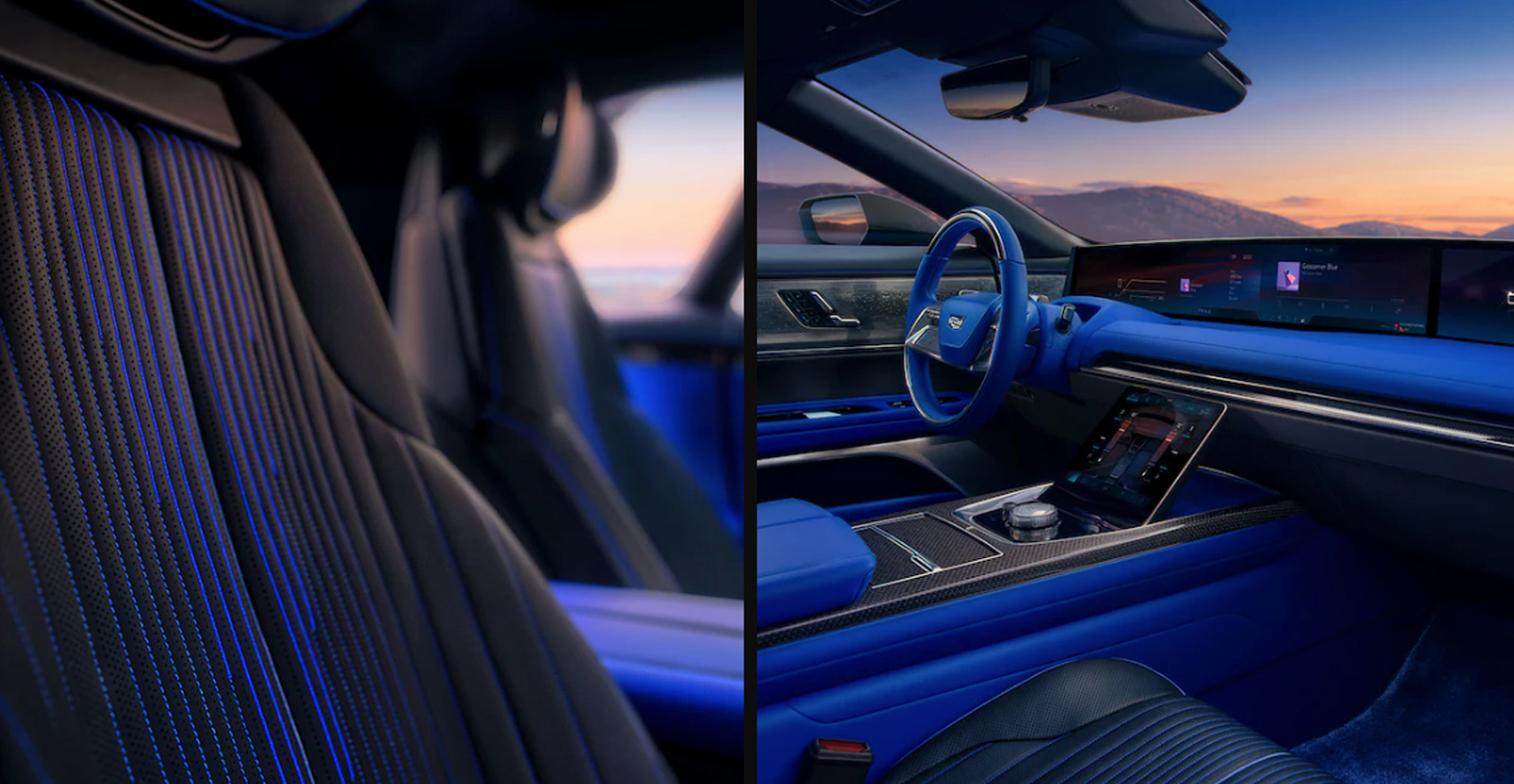 I like the use of color there, all of which I’m sure is customizable to the owner’s most secret and lurid chromatic desires, and the roof is something called Fixed Smart Glass that doesn’t require a sunshade or headliner. 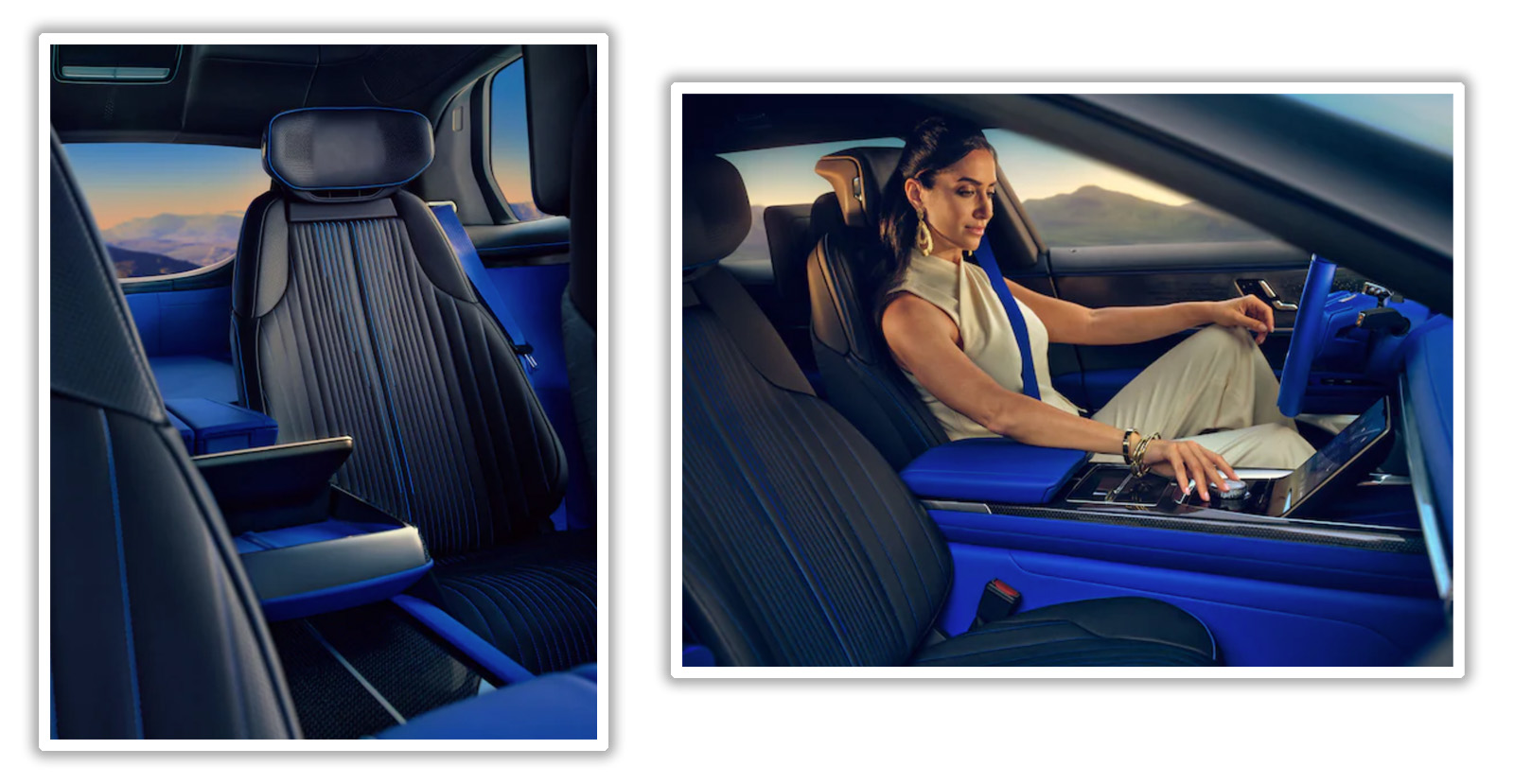 The interior is for four people only, with large individual airplane-style seats at the rear, and, interestingly, no visible division between the passenger and cargo areas. That’s pretty unusual for a luxury vehicle, and while I like how it makes the interior feel even more open and airy, I wonder if that is the only arrangement possible of the interior. I imagine there’s people who like to compartmentalize their luggage. Also, what if you’re hauling bags of peat moss or a bunch of gravel in this thing? You’d want to keep all that out of the back seats, right?

Unsurprisingly, there’s more acreage of LCD screens in here than your average office cubicle, with Cadillac describing it as:

The centerpiece of the interior and the CELESTIQ technology interface is a pillar-to-pillar, 55-inch-diagonal advanced HD display—the largest in the segment. It is a technological marvel, containing two separate screens under a single pane of glass. The driver-side display — with pixel density comparable to an 8K screen — shows driver and shared vehicle information, while the passenger side allows the occupants to play media, use the Internet capability, connect their smartphones, and more. In order to separate the passenger display from the driver, Digital Blinds Active Privacy technology provides a virtual privacy shield, dimming the passenger screen from the driver’s view when in use.

So, that’s one huge screen all across the dash, but the passenger’s side can be obscured from the driver’s prying eyes, so you don’t have to worry about your driver seeing how your OnlyFans is doing or get distracted when you watch the finale of What We Do In The Shadows.

3D Printing And An Easter Egg

Oh, hey, look, I think I found an Easter Egg! 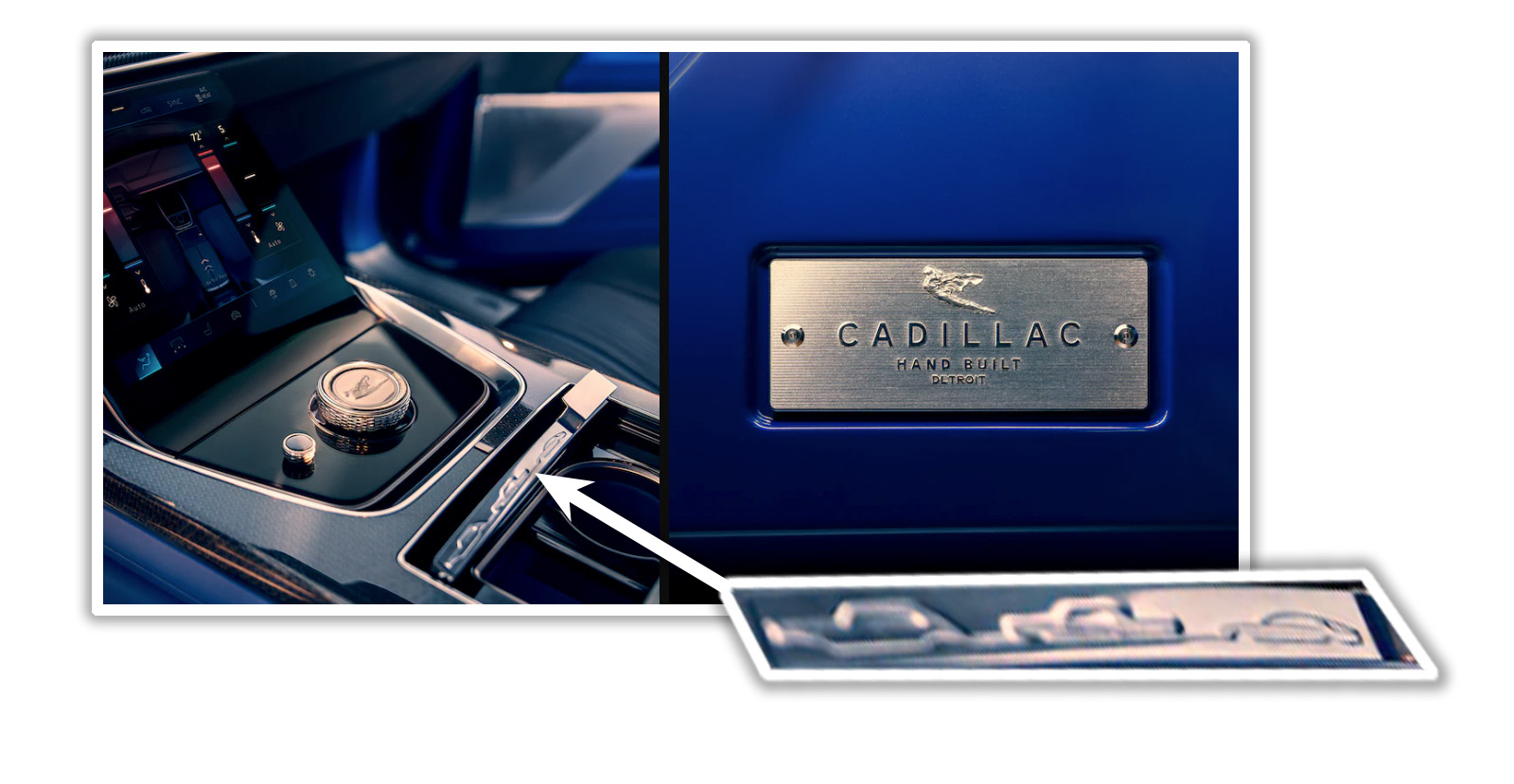 It looks like on the side of the drink holder cover are the silhouettes of three cars; I suspect three Cadillacs, one from what I’d guess to be the 1930s, one from the late ’50s or early ’60s, and the Celestiq. Neat! I also suspect that buyers can specify details like these, thanks to the fact that so much of the interior trim is 3D-printed:

With 115 3D printed parts in the production vehicle, the CELESTIQ demonstrates GMs broadest use of this process.

With so many 3D printed parts, customization of these elements should be easier than ever before, which provides a lot of interesting possibilities.

If you’re like most of us, you won’t even consider a car until you hear what Lenny Kravitz has to say about it, so I’m pleased to report that Cadillac has anticipated this desire and has provided you with a video that should help:

The Celestiq is set to start production at the end of 2023, and will be in the Middle East by 2024. And I have a prediction: the next U.S. Presidential limo, the “Beast,” will be based on one of these. Or will at least be made to look like one. That’s my guess.

I'm a co-founder of the Autopian, the site you're on RIGHT NOW! I'm here to talk to you about taillights until you cry and beg me to stop, which I absolutely will not. Sorry. Hug? Also, David's friend.
Read All My Posts »
PrevPreviousThe New Rolls-Royce Spectre Looks Like A Perfectly Dull $400,000 Electric Coupe
NextRenault’s CEO Doesn’t Think EVs Will Be As Cheap As Gas-Powered Cars Anytime SoonNext