Facebook-f Twitter Instagram Rss
Menu
Menu
Home » The Most Expensive VW Beetle Ever Sold Is A Ratty ‘Herbie’ From The Ceiling Of Planet Hollywood. Check It Out

The Most Expensive VW Beetle Ever Sold Is A Ratty ‘Herbie’ From The Ceiling Of Planet Hollywood. Check It Out 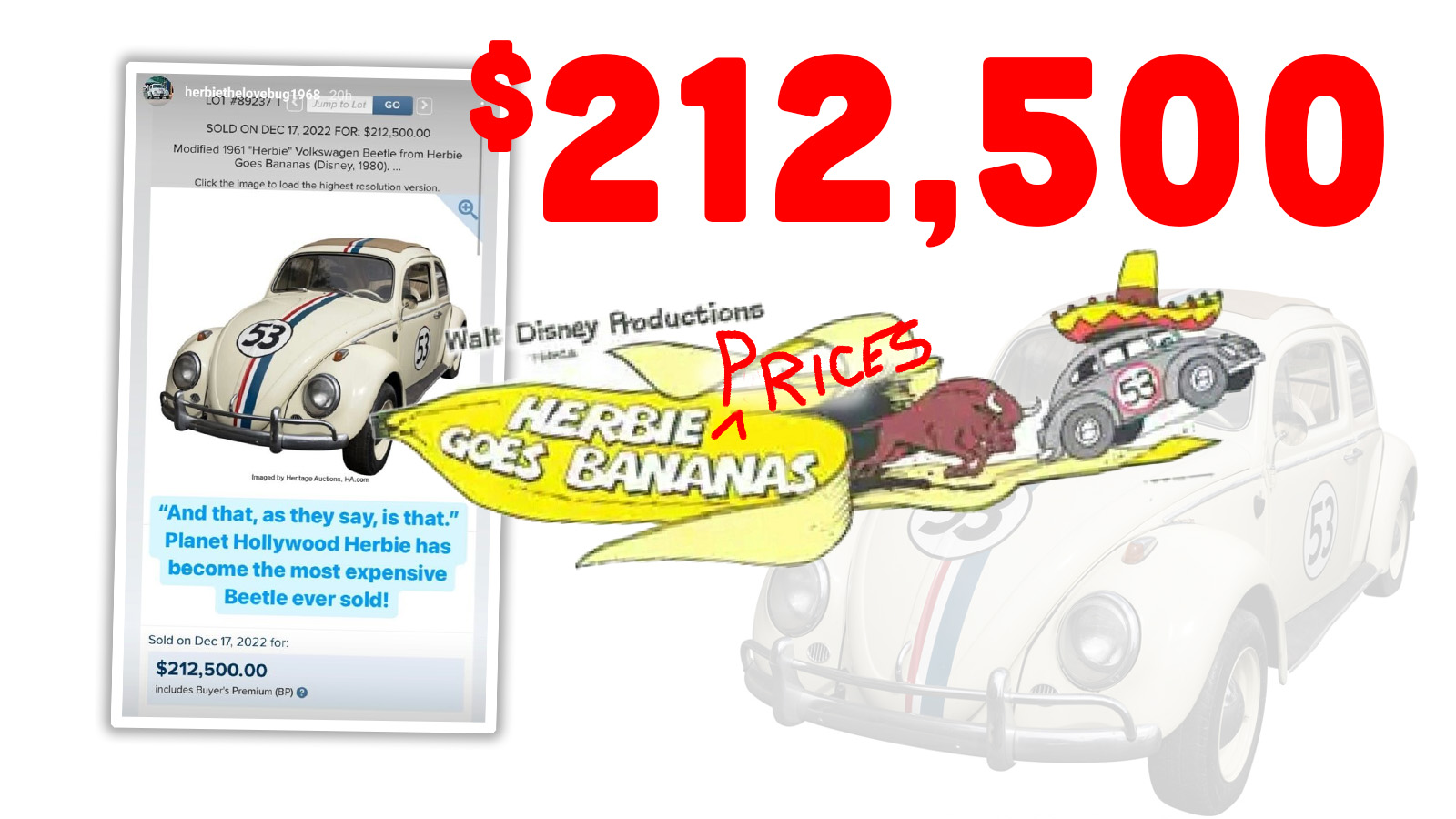 My first car was a 1968 Volkswagen Beetle painted the color of chewed Wrigley’s gum, and it cost me $600. Beetle prices have stayed pretty reasonable for decades, even after the car became less ubiquitous and more collectible over the ages. VW just built sooo many. Lately, air-cooled VW prices have been rising higher and higher, especially Microbuses that trigger money-flinging nostalgia from rich ex-hippies, but Beetles have been getting up there, too. Recently, though, it seems we’ve hit a new record for expensive Beetles, as the priciest Beetle ever sold just went for $212,500. It’s got all kinds of holes cut in it, and it’s really a bit of a mess. But that’s okay, because it’s also a movie star: a genuine Herbie the Love Bug. 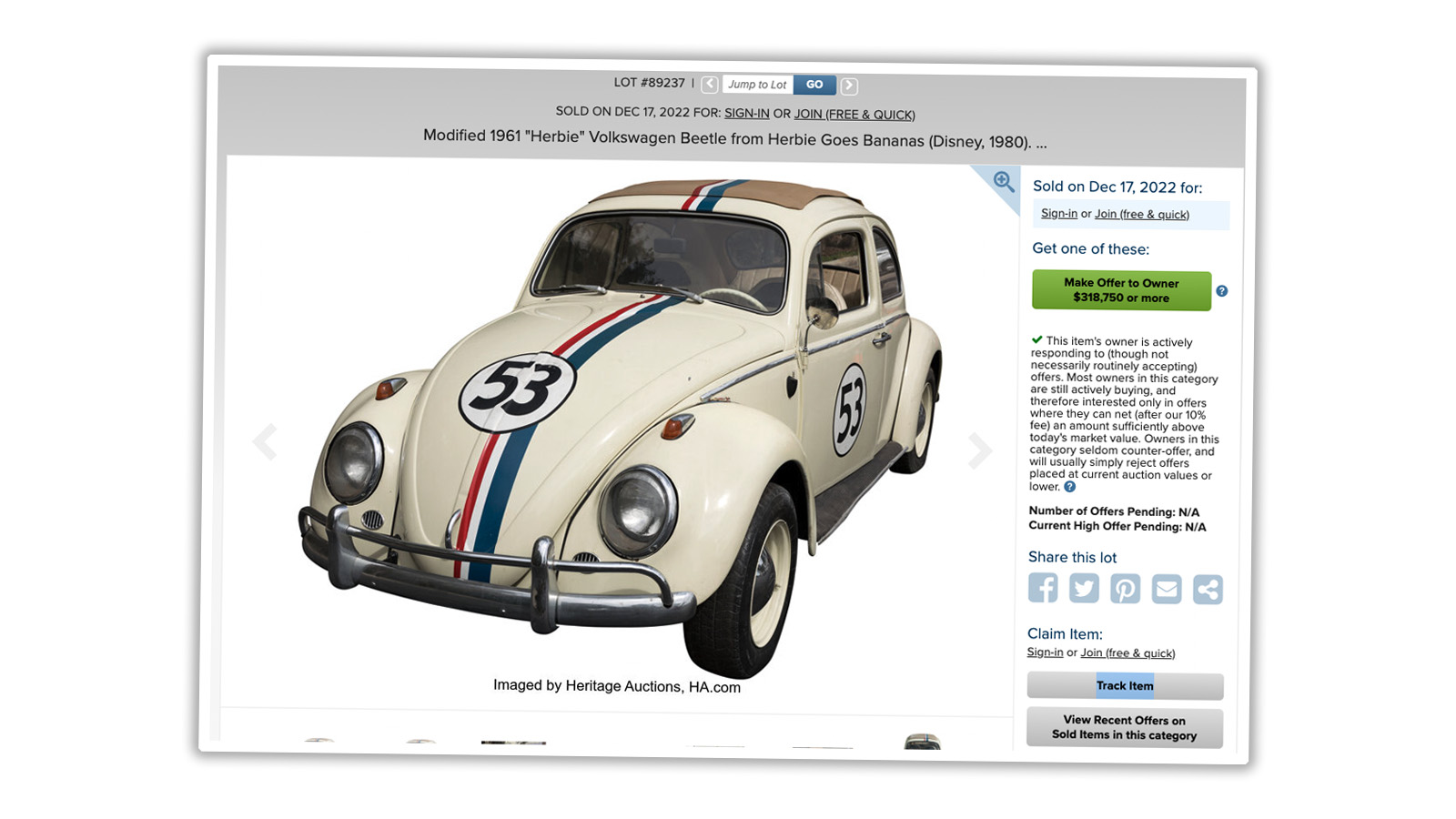 Yes, $212,500: enough for a decent house in many of the less-in-demand parts of the country, or a fantastic house in a great city so many years ago it doesn’t even matter anymore because you’re not finding shit that cheap now. But, for a Beetle, this is a huge price! The previous most-expensive Beetle record of $128,700 was also a Herbie, used in the movie Herbie Goes to Monte Carlo. And this one is nearly twice that price. Why? 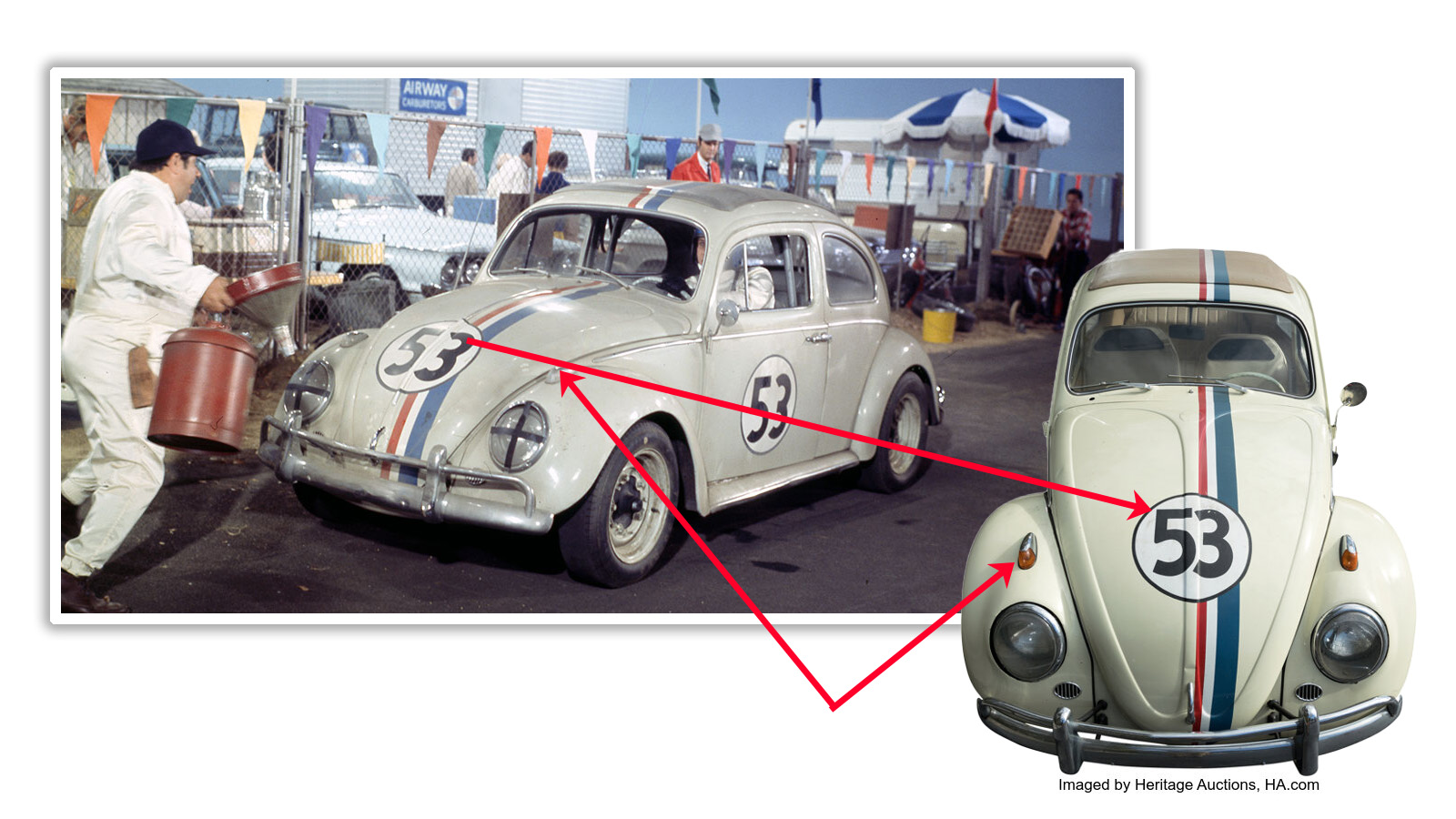 Well, honestly, I’m not sure! Looking at this Herbie, even I can tell it’s not nearly as well sorted as the $128,700 one; the font used on the 53 gumballs is wrong, the indicators are amber (Herbie was a ’63, which had clear ones), the paint is coming off in places, revealing some rusty-looking underlayer, and the overall condition of the car isn’t as good. What’s going on?

This car was previously owned by Planet Hollywood, the casino in Las Vegas, and was suspended from the ceiling of one of its restaurants, as you can see here: 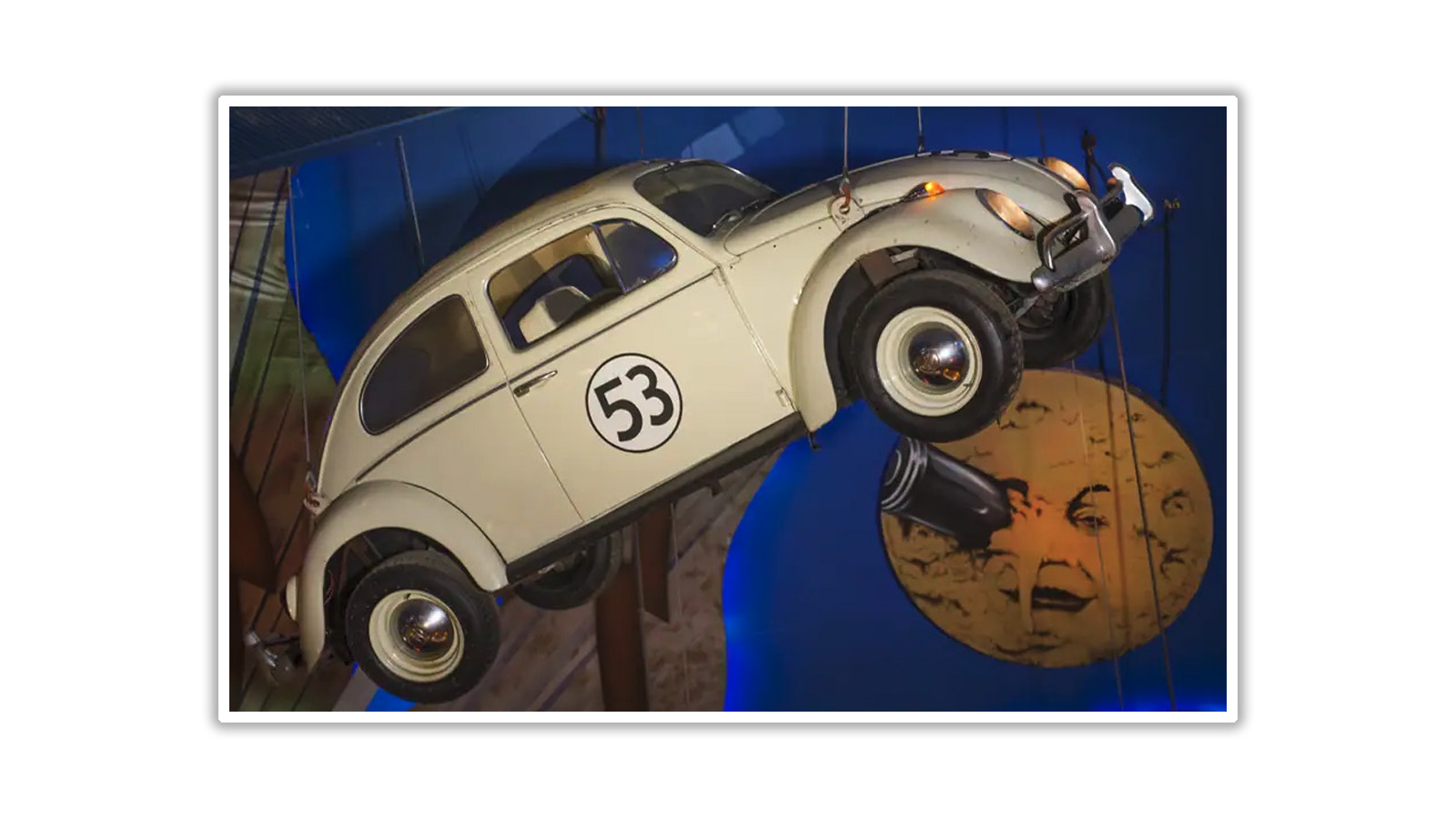 That picture was sent to me by Tory Alonzo, an air-cooled VW expert and Herbie collector, and he gave me his thoughts about this milestone Herbie sale:

“I’m kinda in shock honestly. My friend Dan even said the same thing. We are just shaking our heads. It’s the Planet Hollywood car which was a quickie inaccurate resto at best for display.”

The friend he mentioned, Dan, is Dan Miller (Dan owns a VW restoration shop called Red Barn Restorations, just so you know), arguably the world’s leading Herbie the Love Bug movie car authority, having worked on restorations of the previously highest-selling Herbie and 13 or 14 other genuine Disney movie Herbie restorations as well. The man knows what he’s talking about.

That’s not to say Dan is upset by this massive payout; quite the contrary:

“I think it’s surprising to see an original Herbie go for this figure – but I’m glad to see it get more recognition than we’re used to seeing. It’s not just an old Volkswagen, it’s a movie prop, and a pop cultural icon. How much is a used baseball? Fifty cents? But a baseball signed by Babe Ruth? That’s a very different thing.

Other movie cars like the Back to the Future DeLorean have gone for higher prices, but Herbies have often not because “they’re just a VW.” Clearly, they’re not just that, and I’m glad to see this changing.”

This particular Herbie seems to be a “blind driver” car, which means it was designed for a hidden driver to use it, giving the illusion that the car was driving itself. As a result, it has all sorts of hacked-up modifications, including a shifter relocated to the rear of the car, all kinds of holes hacked in the wheel wells and trunk, and various dents and weird part swaps, like what looks like a fuel tank from a portable generator. 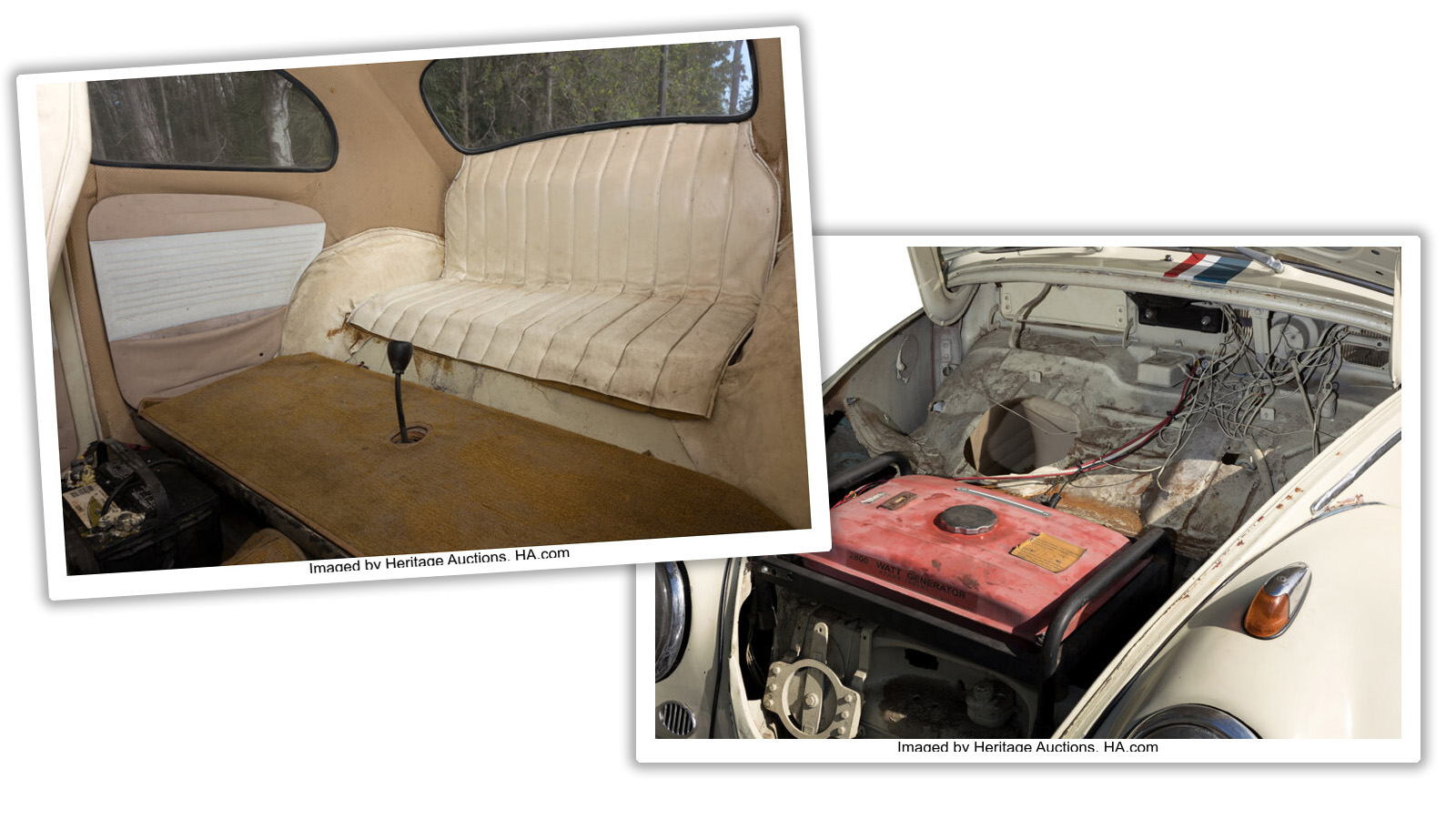 But, these all actually add to the value, because those hacks and mods were done by Disney engineers, and are what make this old (in this case, a 1961) VW a real, hardworking movie car.

What’s questionable is the restoration attempts that were made to make the car look presentable for ceiling-hanging above diners at Planet Hollywood. This Herbie is very likely one of the “rusty Herbies” from the 1980 movie Herbie Goes Bananas, which involved Herbie spending some time floating in salty ocean water before making it to Mexico where, among other things, he participated in a bullfight. Here, look:

Dan and Tory both believe that the Herbie just sold likely started as a Herbie Goes to Monte Carlo car, and was then re-used in Herbie Goes Bananas, after being painted to look all rusty. You can see some of the rusty underpaint in pictures of the Planet Hollywood car.

Of course, if Planet Hollywood wants to hang a Herbie from the ceiling, they want one more recognizable than what most people would just see as a rusty old Beetle. So, they re-painted it and added new graphics, but the accuracy of those is pretty poor. 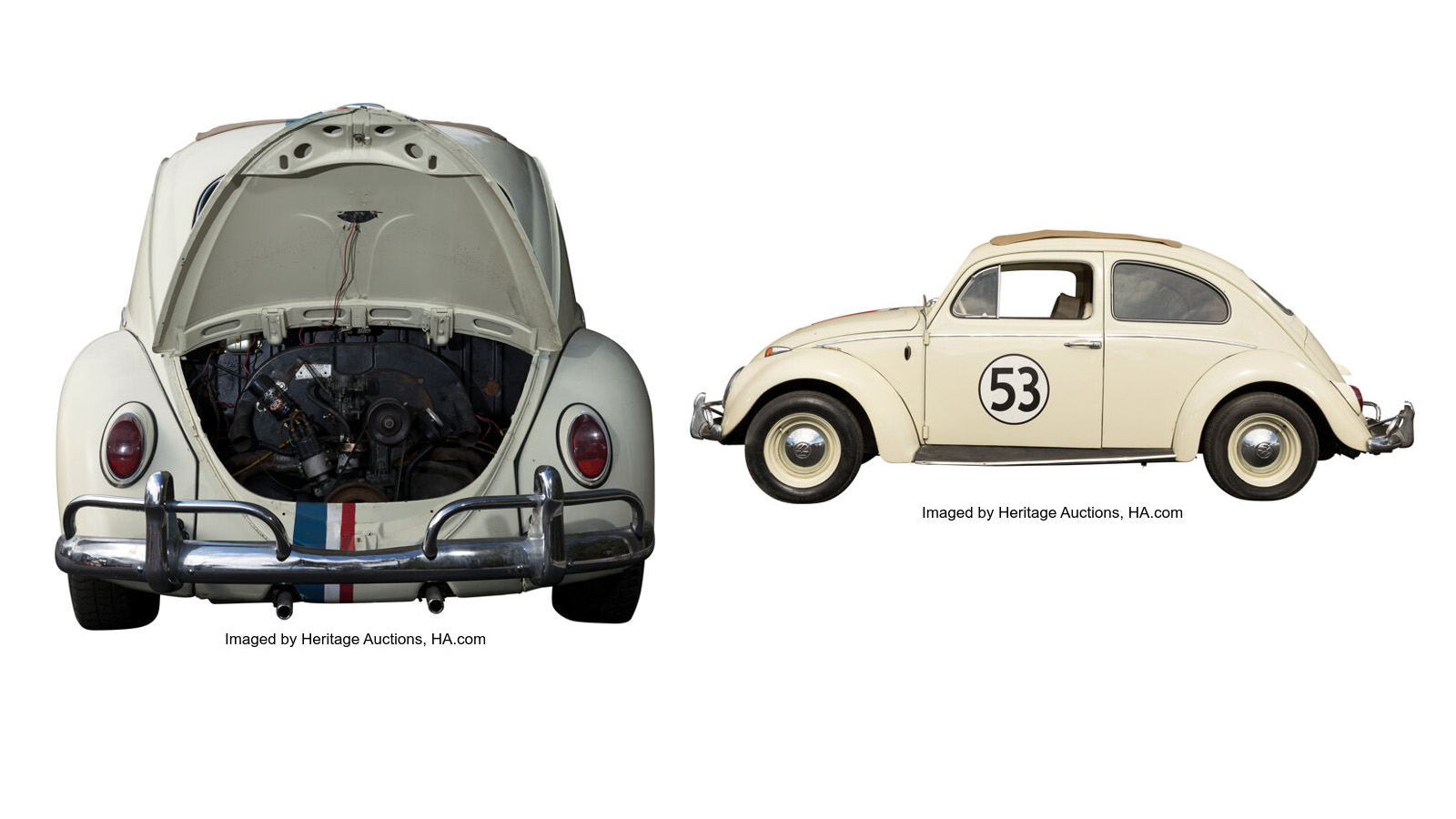 Still, as Dan said, this is an exciting development for Herbie collectors, because it shows that Herbies might now command the prices expected of other movie cars. The new owner has not yet been revealed, and my experts didn’t have any guesses, but I’ll hope whoever it is might consider replacing the gumballs and other details with more accurate ones, and leaving all the period mods and hacks intact.

I'm a co-founder of the Autopian, the site you're on RIGHT NOW! I'm here to talk to you about taillights until you cry and beg me to stop, which I absolutely will not. Sorry. Hug? Also, David's friend.
Read All My Posts »
PrevPreviousWhich Silly Car Should I Rent From Turo In Los Angeles This Week?
NextThe 2023 COPO Camaro Is A Factory-Built Drag Car With A Screaming 10.35-Liter Big-Block V8Next