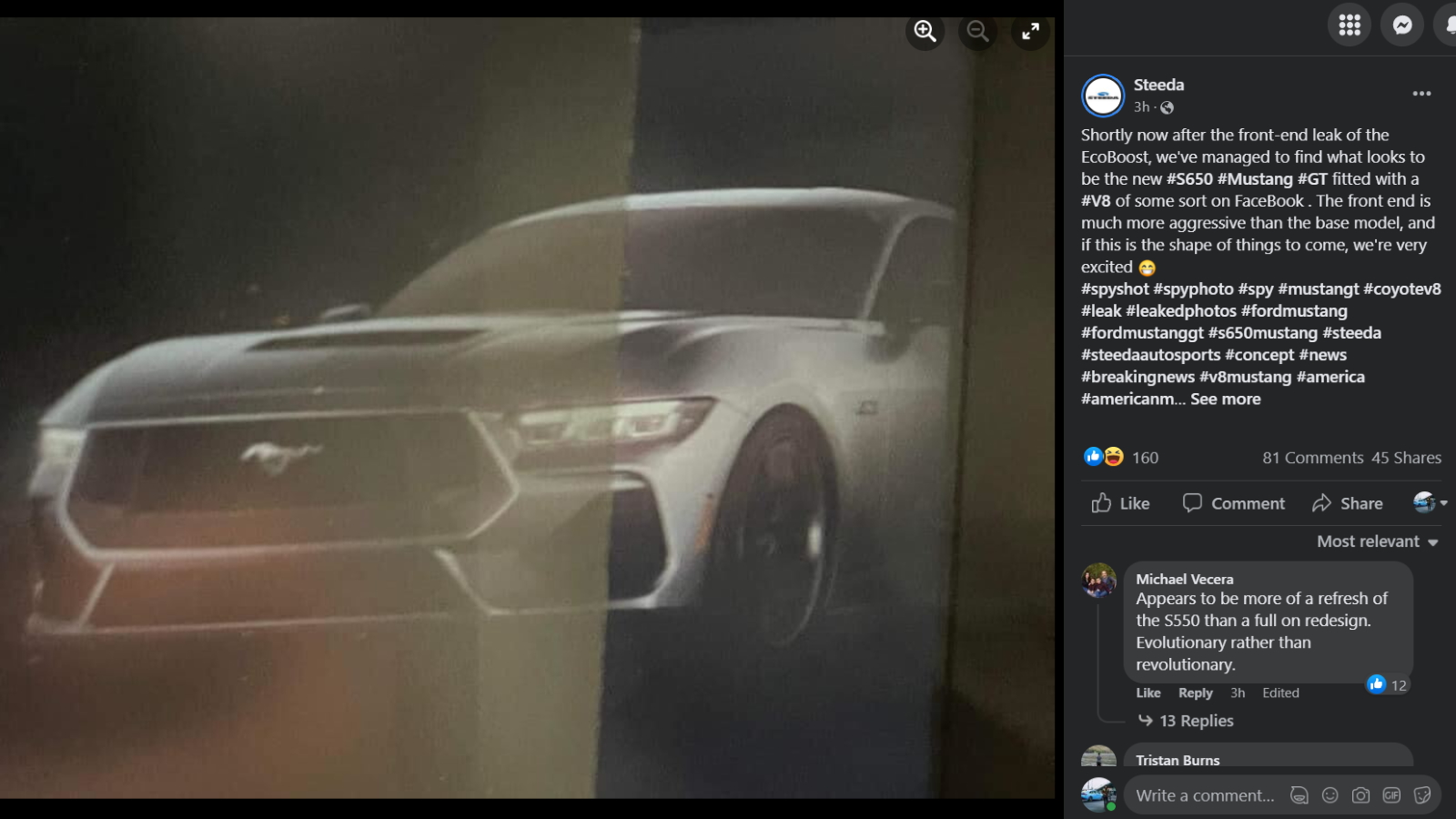 It’s rare that a grainy scan of some sort of printed material makes news, but buckle up. Someone might have leaked the front end design of the 2024 Ford Mustang.

This image was sent in to Steeda today by a friend of the Mustang tuning company, and it appears to show a high-performance variant of the next Mustang. Why am I tiptoeing around wording? Truthfully, all I know is that I’ve never seen a Mustang that looks like this before. Besides, if I had a dollar for every pixel in this photo, I’d have 75 cents. Still, 75 cents makes change and this photo shows a lot of changes that could potentially come to the 2024 Mustang.

So why are we so sure that this particular image contains a high-performance Mustang? Well, past Mustangs have only featured vertical grille slats and some form of hood vent on V8 models, plus there’s some sort of special fender emblem on display in the photo above. Also, take a look at those deep lower grilles; I think they look absolutely wicked. I’m not entirely sure if this particular Mustang features black wheels or if it’s just in motion for this shot. Likewise, I can’t actually make out what the fender emblems say. Do they indicate displacement, trim level or some sort of equipped package? At this resolution, it’s impossible to tell.

Regardless, the changes in this photo appear evolutionary rather than revolutionary. Think Ferrari 488 GTB versus Ferrari 458 Italia (I know, kinda random). While one grainy scan of a piece of printed material is nowhere near enough to go off of, Ford Authority has obtained a much clearer photograph of an actual Mustang with a front fascia we’ve never seen before. Let’s break it down.

This particular Mustang appears as if it could be a rest-of-world Ecoboost car, as evidenced by the small wheels, Euro-spec license plate bracket and mirrors similar to those on the current European-market Mustang. Starting from the top, the leading edge of the hood looks flatter and more prominent, a good tool for sharpening up a car’s look. The headlights return to a strong horizontal design similar to that of the 2015 Mustang, except these units are slimmer and feature three projector elements in each lamp. Moving down the front end, the grille mesh appears influenced by the 1967 Mustang, adopting a flatter, more trapezoidal shape. This iteration of the pony grille emblem features a satin finish, up to date with recent trends towards satin metals rather than chrome finishes.

Fairly standard stuff so far, but it’s about to get weird. Just as in the photograph of the silver car, the grille bezel on this black car doesn’t hug the lower edge of the grille mesh, instead plunging all the way down to be in-line with the lower corner grille accents. On this particular car, the black grille bezel hides well against the black paint, but it’s going to make for a very different look on brighter colors. Moving on to the lower grilles, a bit of current-generation Mustang Mach 1 influence is found in the angular dividers that section off the corner grilles. As for those corner grilles, they appear as if they may be fake on this particular unit and are trimmed in L-shaped accents on the outer and upper edges.

As for the lower center grille on this car, it appears largely functional and features a centered radar sensor, likely for advanced driver assist functions like adaptive cruise control. Finishing it all off is a thin, unpainted full-width, splitter-like trim piece that runs along the bottom of the front bumper.

In terms of authenticity, sources close to Ford have alleged that this photograph was taken inside one of Ford’s pilot plant facilities, but until we are certain about the provenance of these photos, all we can tell you is: “This Looks Like It Might Be It.” Meanwhile engineers within Ford are reading this and laughing at our ignorance. It’s okay; laugh away!

In any case, I’m a huge fan of the styling going on here. Both of these front fasciae in these images look aggressive yet refined, heaps more put-together than the current car’s front end with its L-shaped lamp assemblies. While we definitely can’t say for sure that the 2024 Ford Mustang will look exactly like these two leaked images, there is at least some likelihood that changes between the vehicle shown here and the production car will be minimal. If what we’re seeing is a current development vehicle, this could end up being close to what you see at dealers in a year and a half, as major design elements are usually frozen well before a car debuts — and the 2024 model isn’t that far away.

Even if this is how the next Mustang’s face looks, we’ve seen no rear end designs, so there’s still plenty left unknown. Though one thing we’re fairly sure of: There will be a V8.

Thomas is a Nu Rave-blaring, heel-toe downshifting, maple syrup-swilling, chassis-geeking, junkyard parts-hauling, floppy-haired scenester who's been writing about cars since college. His current ride is a 2006 BMW 325i with the six-speed manual gearbox. Instagram: @thomas.hundal Twitter: @thomashundal
Read All My Posts »
PrevPreviousSome Company Went Out Of Its Way To Turn Boring Honda Accords Into Bonkers Sports Sedans
NextCold Start: Something About The Name Of This Car Feels WrongNext