When I was growing up, the car my parents bought to replace my dad’s old 1968 Automatic Stickshift Beetle was an extremely smart, safe choice: a 1980 Honda Accord four-door sedan. Throughout the 1980s, Honda Accords were absolutely ubiquitous, consistently a significant portion of any road or parking lot you found yourself in. They were eminently sensible, rational cars. I can almost guarantee you that no ’80s era Accord owner ever walked out to their car, took a careful lap around it, and declared, to the heavens and anyone in earshot: “A fine automobile! But I sure wish I had paid twice as much for it, and that the front end was more batshit!” Well actually, this may have happened once, at least, because a doubly-expensive luxo-Accord with a genuinely weird front-end treatment existed. It was called the Rapport Ritz.

Rapport International was one of those peculiar “converter” companies, this one based out of London, somewhat like a coachbuilder-lite. Rapport actually had a showroom in the Mayfair area of London and did the work in Woking, so they were more visible than many similar companies. They’d take existing mass-market cars, and rework them with some body panel changes, lighting changes, and lots of interior upfitting — all in an attempt to make a more unique, premium vehicle out of mundane but reliable and accessible mechanicals.

Companies like Monteverdi out of Switzerland were an example of this, taking mainstream American cars like the Plymouth Volare and dressing them up in an Italian suit to become the Monteverdi Sierra. It’s still a Volare, but you can’t really tell unless you, you know, look at the doors.

Rapport’s main business was armoring cars like Mercedes S-Classes so its rich, shoot-able passengers wouldn’t get perforated, but the company also had some experience making coachbuilt creations, like its open-top conversion of the MG Metro and a sports car called the Forté, which featured an earlier version of the Ritz unusual front end treatment, which I’ll be showing you in detail very soon here.

What Rapport did with the Accord was pretty similar to what Monteverdi did to the Volare: The company took a reliable, affordable, best-selling car and made it expensive, fancy, and strange. It called its re-worked Accord the Ritz, and it looked like this in profile, which remained its most Honda Accord-like angle: 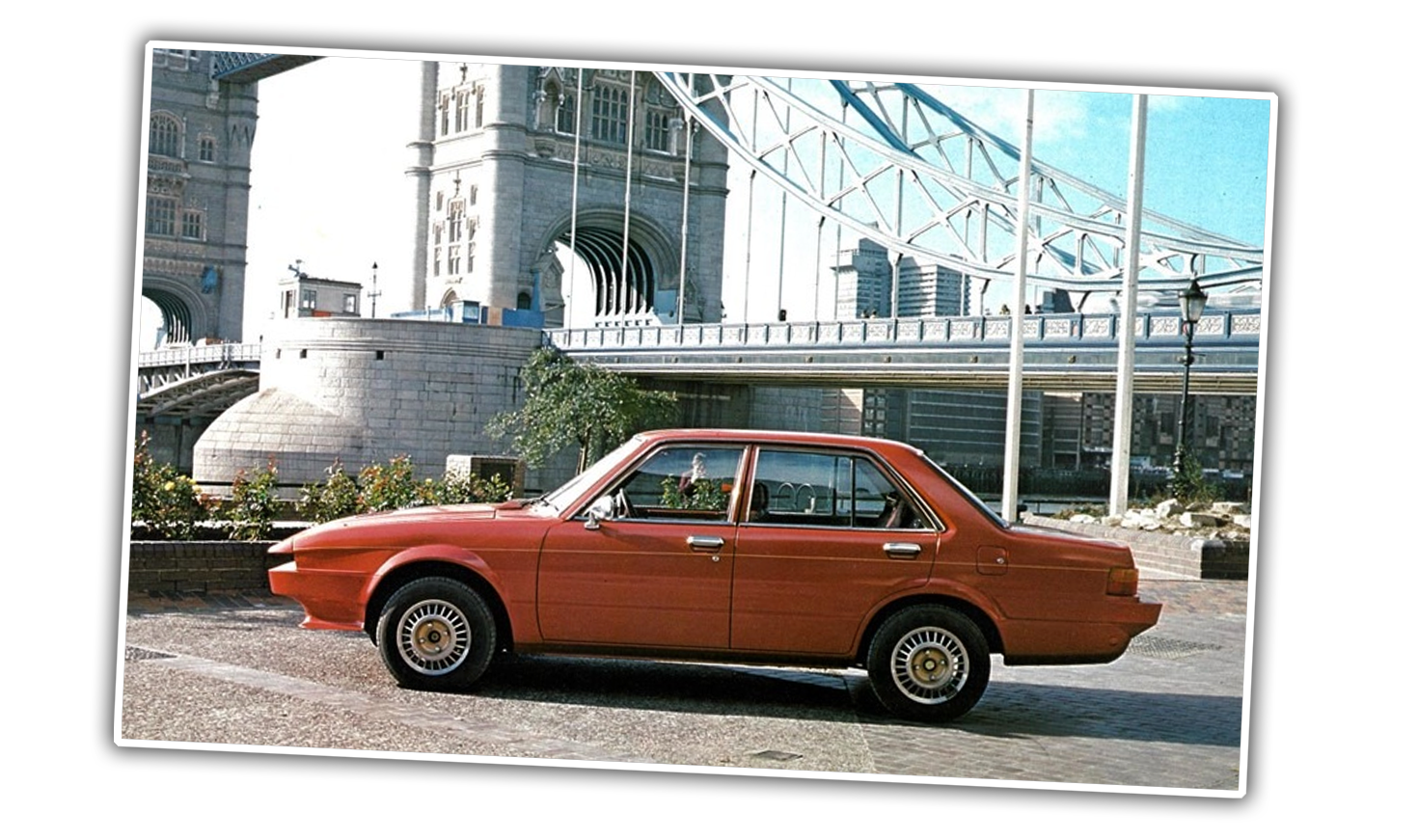 Just in case you forgot what a bone-stock Accord of this era looks like, here you go:

So, as you can see, Rapport spent most of its time at either end of the Accord, at least for the outside, where it added some body-colored plastic bumper caps and different taillights, in this case borrowed from the British Ford Granada. 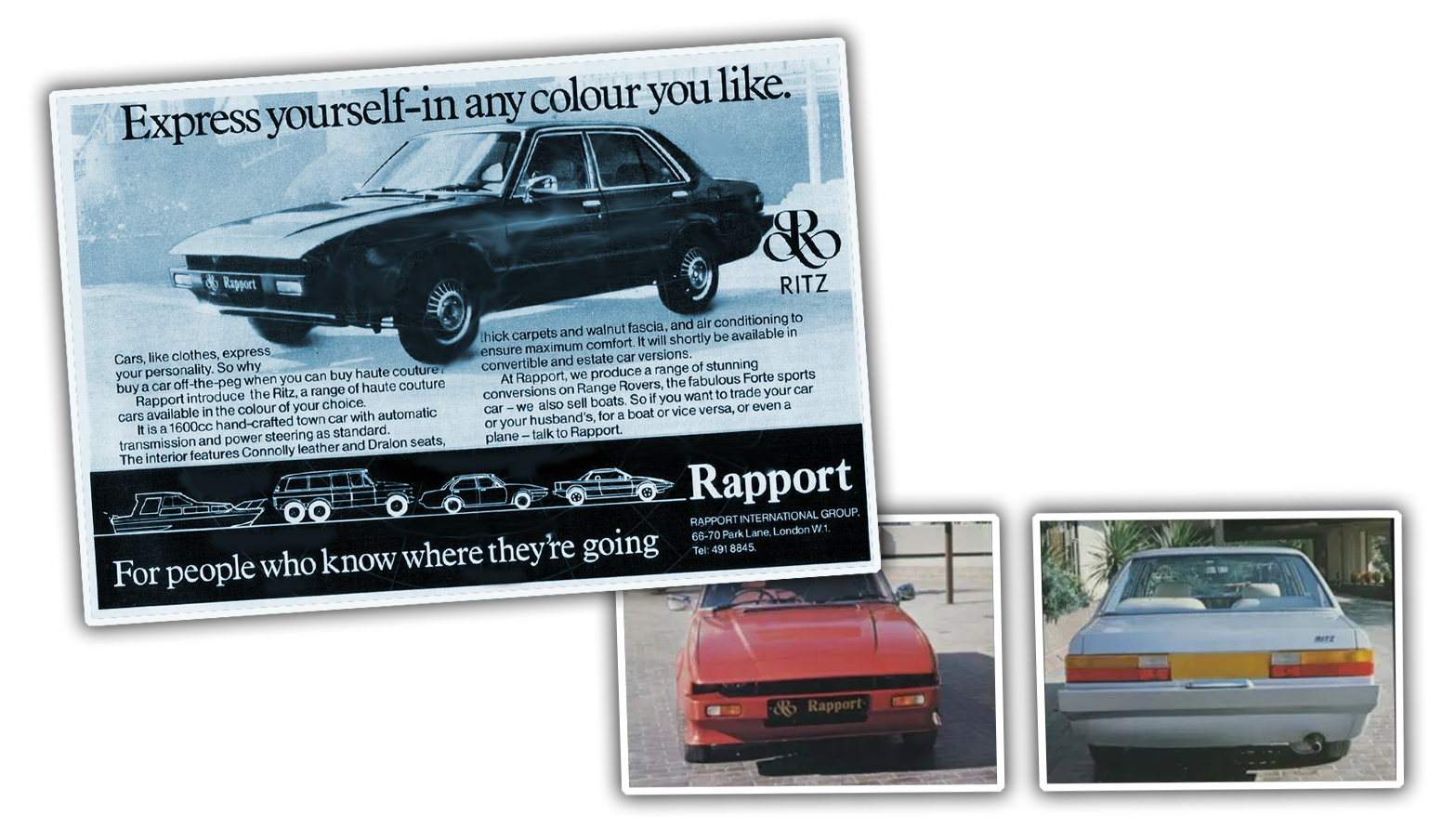 The new front fenders were made from aluminum, with a new hood and trunklid made from fiberglass. But that’s not what made the Ritz really special, though. The real party trick of the Ritz was at the front end, which looked like this: 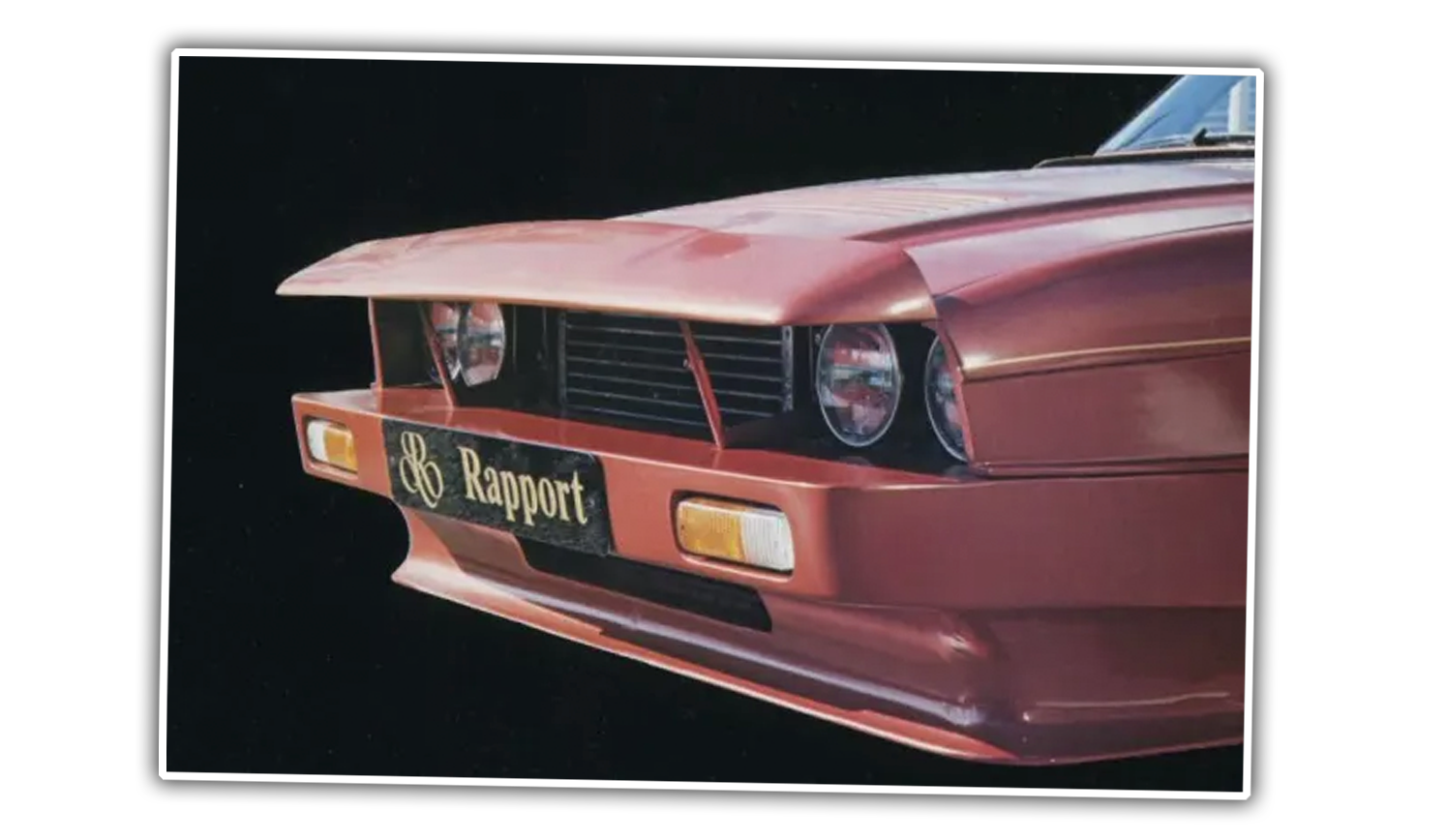 Yes, yes, look at that! It’s like pop-up headlights, but the rare and coveted monobrow style!

I can tell by the spacing of those quad round headlights that the front end here is just a stock Accord, but with the grille assembly removed, as you can see the bare radiator back there.

That monobrow I suppose can be thought of as some kind of airfoil, though if Rapport actually did any kind of aerodynamic testing on it, I’ll eat a chunk of my Yugo’s spare tire. With the brow in the down position, the front end did manage a sort of sleek and sinister look, which the normal Accord was rarely accused of.

Those turn indicators look to be the stock ones as well, repositioned inside that fiberglass bumper.

On the inside, Rapport went all out, slathering the cabin with Connolly leather, which is not only the choice of many prestigious British car makers, but also what the seats are upholstered with in the House of Freaking Commons. I mean, House of Lords would be better, but still, not bad. 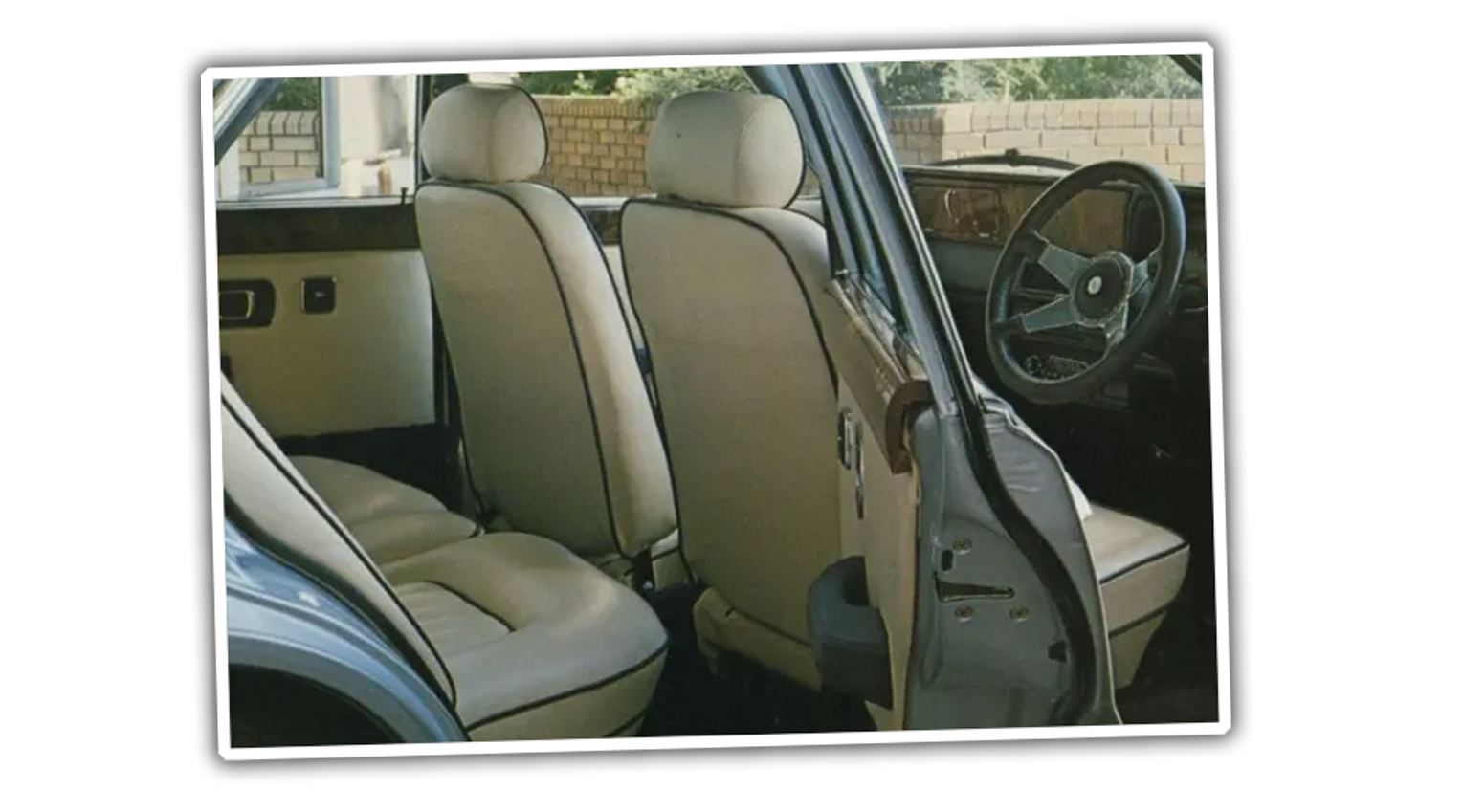 There was also better carpeting, a higher-end sound system, but the strangest interior upgrade, at least to me, was this: 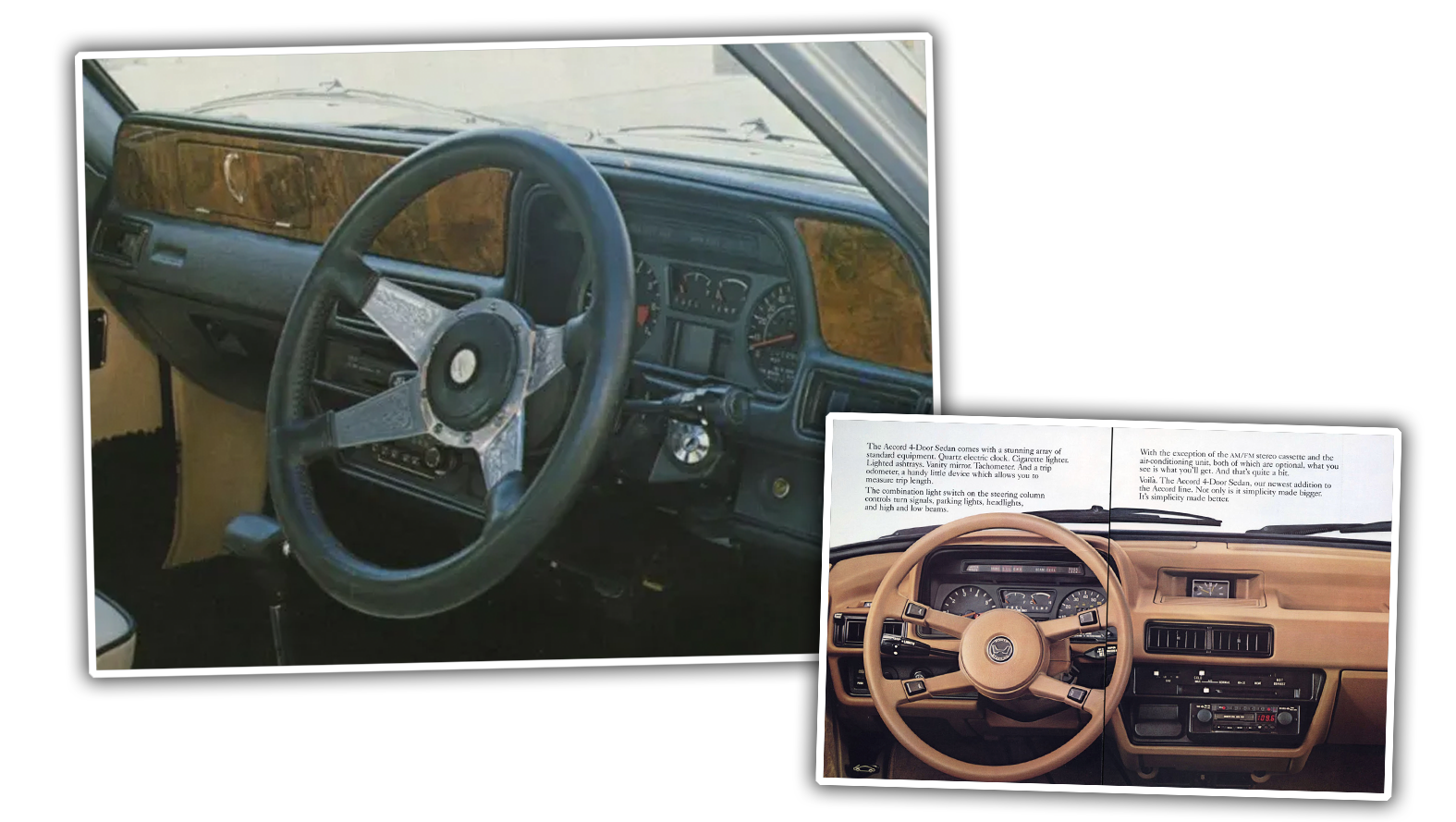 To upgrade the feel of the dashboard, Rapport essentially built a huge piece of wood-and-leather furniture and just plopped it right on top of the existing dashboard. I’ve included an inset picture with a stock Accord dash so you can see how it originally looked–there’s a raised instrument binnacle and a lower dash level, with a clock and some storage trays.

The Ritz covers this all with that burr walnut box, shaped to Tetris right onto the dash, making the whole thing a good four or five inches taller, though the company did thoughtfully add in a little door on the passenger side so you can access all of that dead, enclosed space under that thing.

I’m surprised Ritz didn’t appear to have replaced the clock in there? The documentation says the car has one, but perhaps it’s not visible in this shot.

All this extra stuff added about an extra 110 pounds to the Accord, so Rapport bolted a little turbocharger onto the Honda’s 1.6-liter inline-four, which normally made about 80 horsepower. The turbo only ran at 3psi, so it likely didn’t change the Accord’s performance that much, but I suppose that’s enough to compensate for the weight of a good-sized pit bull that the outfitter added to the car.

I mean, you did get a lot of fancy bits you could touch and better wheels and tires and a modest turbo boost for your money. Plus, can you really put a price on people looking at the front of your car and asking “what the hell is going on there?”

No. No, you can’t. And about 19 people seemed to agree, since that’s how many Ritzes seem to have been sold.

The company also toyed with the idea of a hatchback (Rapport calls it an Estate in this ad) and convertible Ritz, though all that exists of those are these poorly-airbrushed/doctored photos: 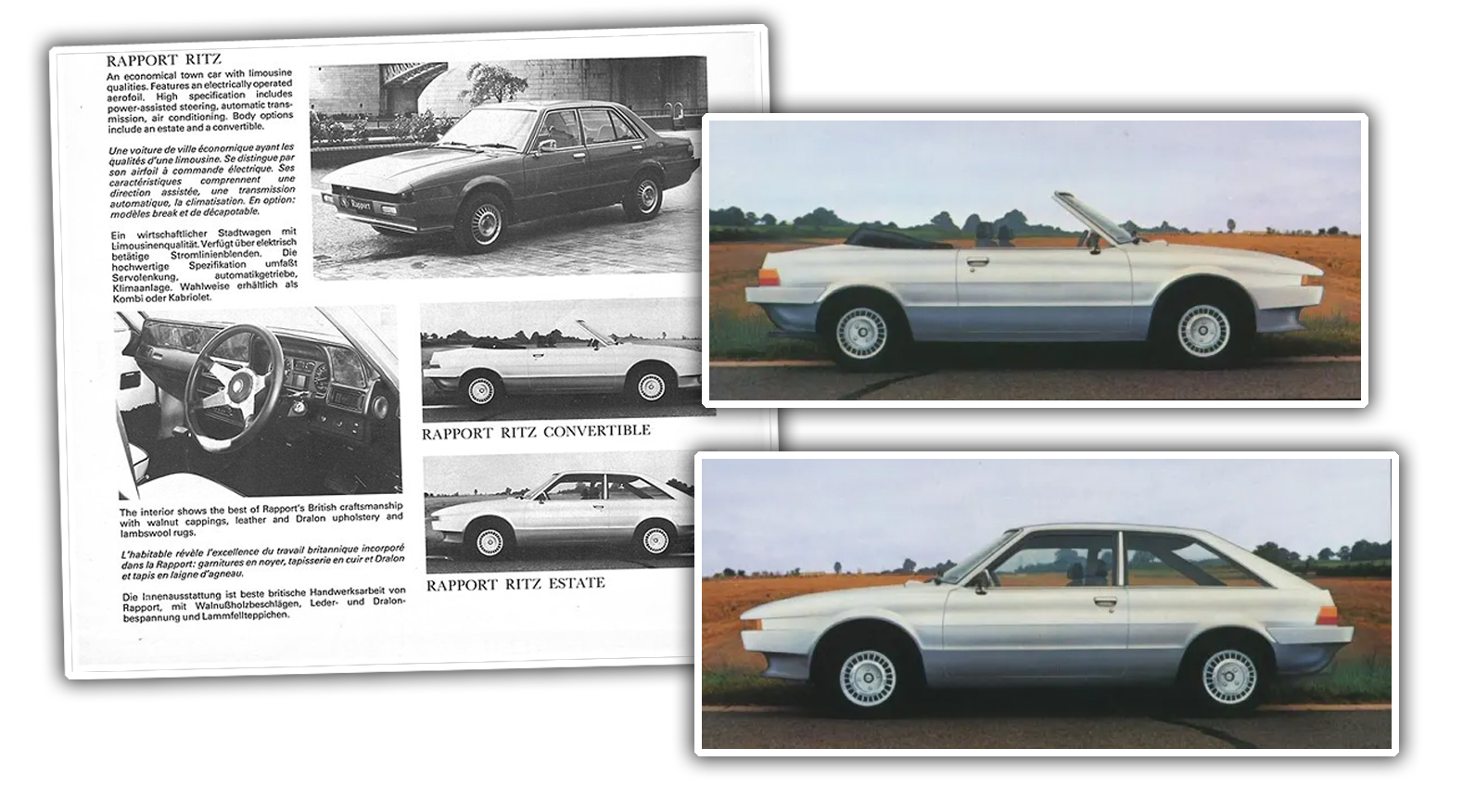 No one knows how many Rapport Ritzes are left, though one was mentioned as still being around as recently as 2001, which, despite 2000 still sounding like the future to me, isn’t all that recent at all. Personally, I hope it’s somewhere out there, being restored, and becoming a wonderful reminder that even the most boring, normal things can become weird as long as you’re willing to throw enough fiberglass, leather, and wood at it and double the price.

I'm a co-founder of the Autopian, the site you're on RIGHT NOW! I'm here to talk to you about taillights until you cry and beg me to stop, which I absolutely will not. Sorry. Hug? Also, David's friend.
Read All My Posts »
PrevPreviousIf You Can Guess Exactly How Much This 1966 Ford Mustang Weighs, We’ll Give You A Prize
NextThe New 2024 Ford Mustang: This Looks Like It Might Be ItNext