Facebook-f Twitter Instagram Rss
Menu
Menu
Home » If You Can Guess Exactly How Much This 1966 Ford Mustang Weighs, We’ll Give You A Prize

If You Can Guess Exactly How Much This 1966 Ford Mustang Weighs, We’ll Give You A Prize

I recently gained access to an industrial scale, and I just can’t stop using it. How much certain cars weigh is just something that fascinates me for some reason. Did you know that a manual 4×4 1991 Jeep Cherokee weighs 3,350 lbs? That’s less than a new Toyota Camry! So let’s have some fun with this. We’ll begin this semi-regular Curb Weight Competition series with: Can you guess how much my 1966 Ford Mustang V8 automatic weighs?

Modern cars have gotten heavy, and as electrification sets in, they’ll just get even heftier. That’s why I’m always amazed anytime I drive an old car onto my local industrial scales.

Do you know how much a modern V8, automatic Ford Mustang weights? Per Ford, a 2022 model comes in at 3,752 pounds. Obviously my brother’s 1966 model — a coupe with a 289 cubic-inch V8, three-speed C4 automatic transmission, and very few options — is going to be lighter. But how much lighter?

To help you guess, I’ll take some pictures of the car so you understand how well equipped it is, as different variants are going to have different curb weights. For example, in my engine bay, you’ll see that my Mustang has power steering. That adds some bulk: 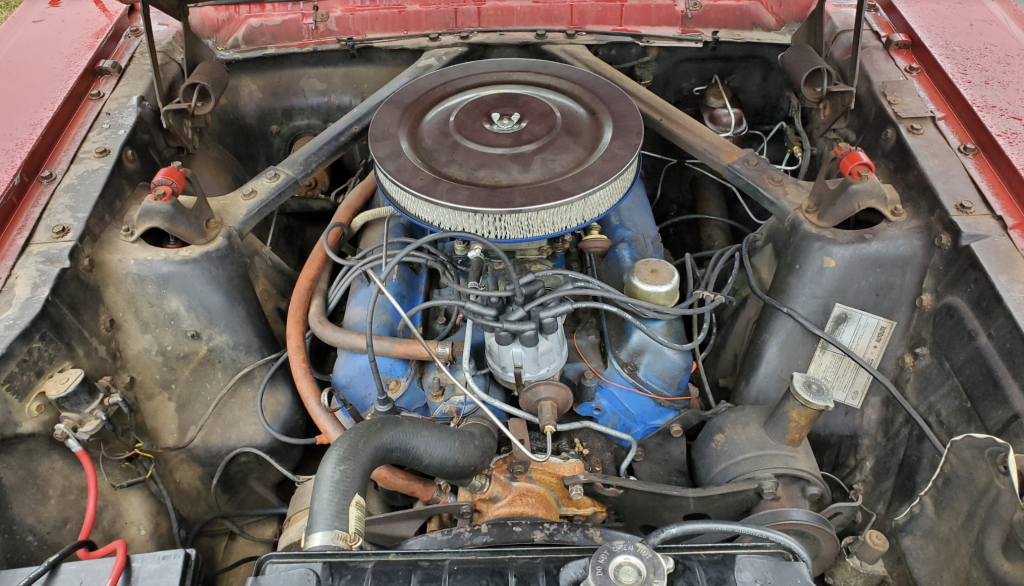 That’s a Holley 2300 carburetor there with an aftermarket air cleaner, but otherwise, this engine bay is mostly stock.

The tires are 195 70/R14 Douglas radials on those fake steel GT-style wheels. Brakes are standard drums all the way around (there may have been two different drum brake kit sizes for these; I think mine are one up from the smallest). The master cylinder has been converted from a single reservoir unit to a dual (because, you know, I don’t want to die) 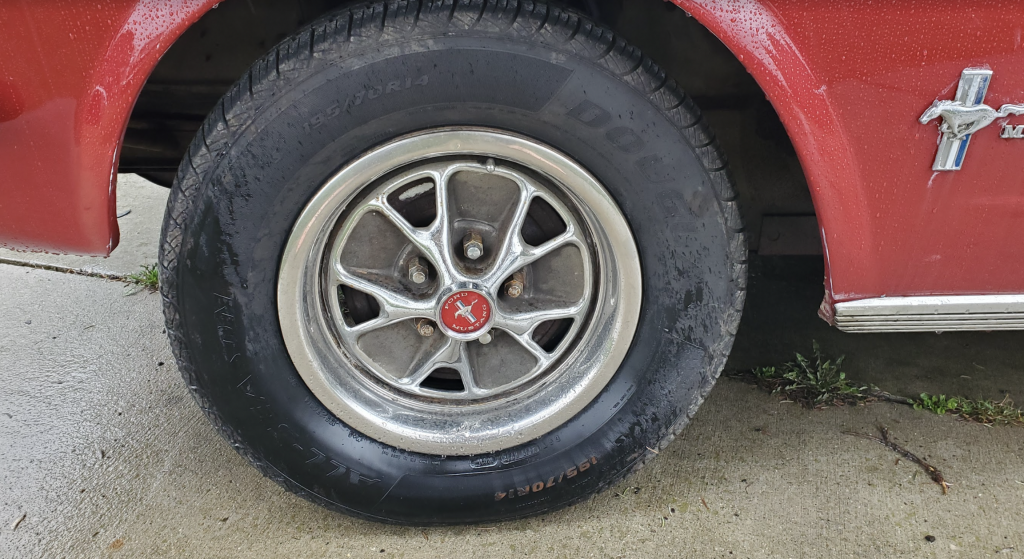 The interior is, well, mostly there, though some carpeting is missing up front. There’s no air conditioning to be found, the seats up front are buckets and not a bench, and generally the cabin is just…a basic 1966 Ford Mustang cabin. 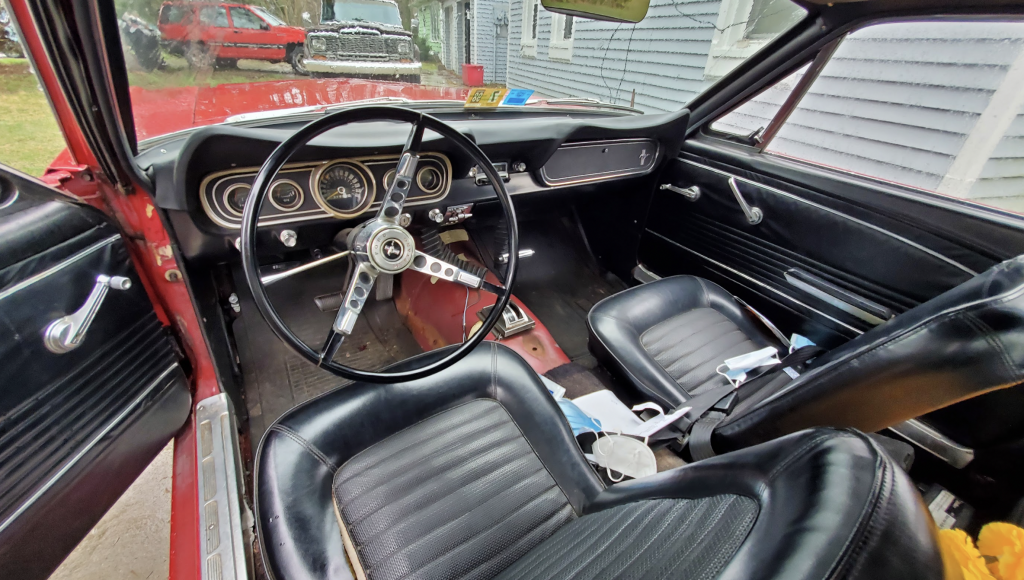 The trunk — which I’ll clean out thoroughly before this test — features a new fuel tank (which I’ll fill to the brim before going on the scales) and a single spare tire. No jack or tool kit will be present when I weigh this vehicle in. 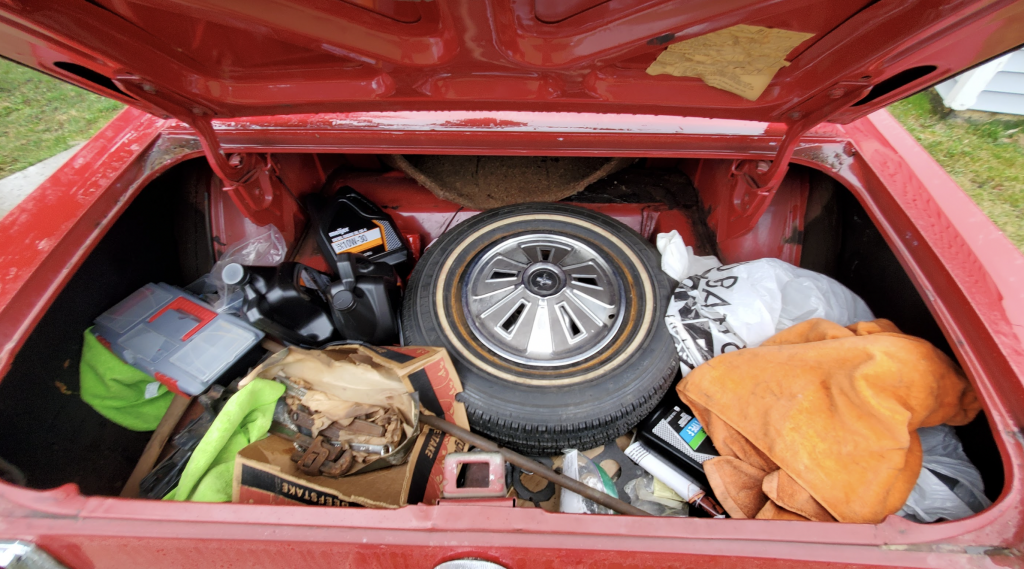 If you want any other details to help you guess a number, let me know. Obviously, the figure I get isn’t going to be 100% accurate, as I don’t know if the scale has been calibrated recently. But if you’re a Jeep connoisseur, that 3,350 pound Jeep XJ number that I told you earlier could give you an idea of whether the scale reads high or low.

So guess away in the comments. How many pounds do you think my 1966 Ford Mustang 289 V8 automatic weighs? This is an open-book test, so feel free to use whatever resources you need to get as close to the actual number as possible.

The winner will receive something from my closet of press-swag. Depending upon what kinds of cars you’re into, there’s probably something for you, there. If you like Porsche, for example, maybe you’ll want literature from the official Porsche Taycan launch event? Or if you like Ram trucks, perhaps that huge Ram paperweight the brand gave out at the 2019 Detroit Auto show will tickle your fancy. I’ve got all sorts of stuff in that closet, and I’ve been holding onto it precisely to give away to readers, because I don’t need any of that bribery. (If carmakers start giving out $700 beaters as press swag, that could change things, but I don’t need a nice wool blanket from Audi or a sleeping bag from Rivian).

Anyway, guess away! I’m excited to use this scale on new press vehicles. How much does a bare-bones Wrangler JL Sport with half doors actually weigh, anyway? What about the upcoming Nissan Z? I want answers.