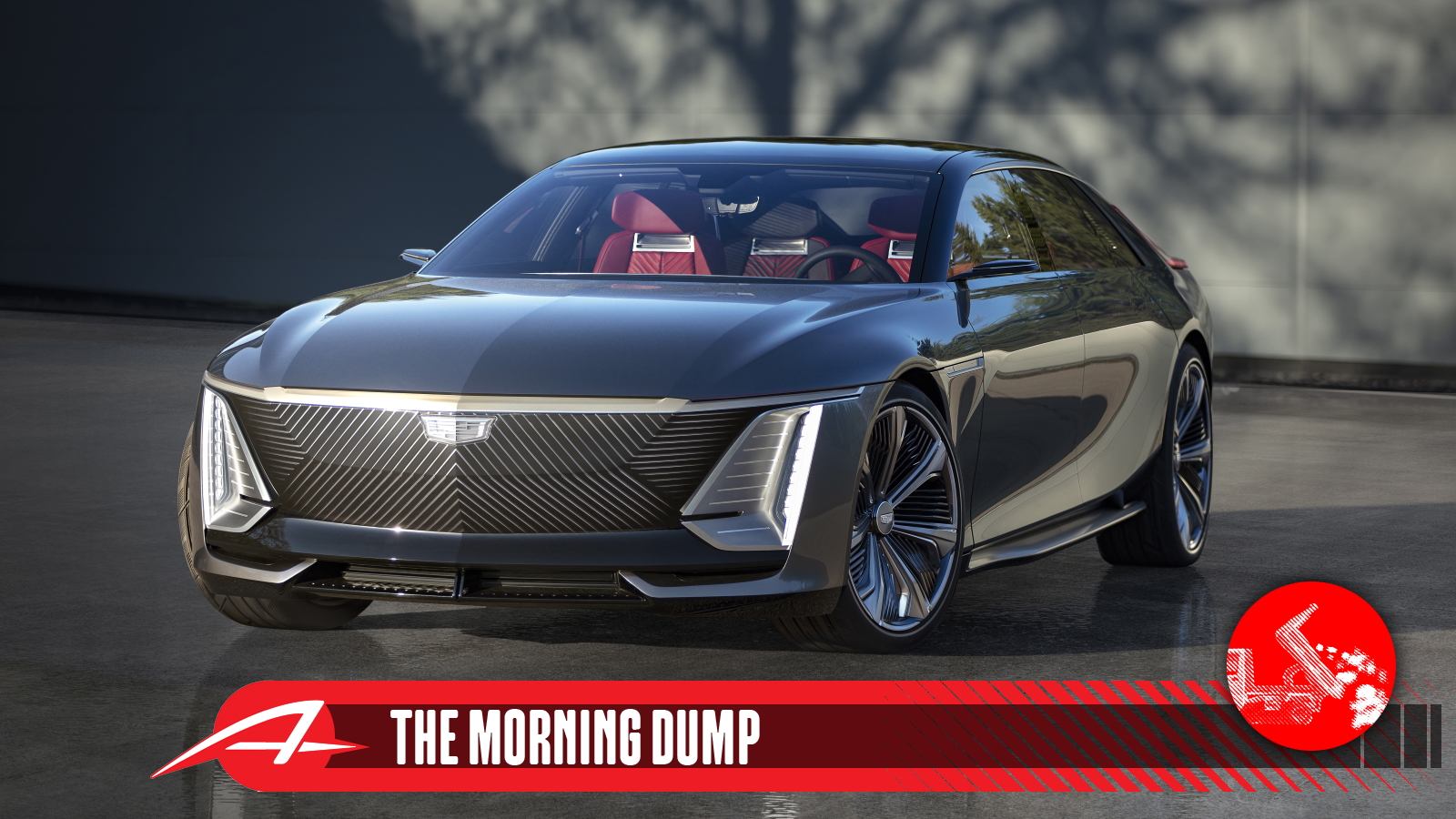 Cadillac unveils its Celestiq flagship, a Hyundai subsidiary is reportedly using child labor, Germany eases congestion by making public transit cheap. All this and more in today’s issue of The Morning Dump.

Well, well, well, if it isn’t another gorgeous high-end show car from Cadillac. Yes, we finally know what the Celestiq will look like, thanks to an online debut on Friday. This car is a big deal for Cadillac, chiefly because plans for production are in the cards for this big sedan. Not only is it an electric vehicle riding on GM’s Ultium platform, it packs properly impressive tech. A proper Mercedes-Benz EQS rival from Cadillac? The standard of the world might be back.

See, the Celestiq plans on breaking ground in a variety of areas. You’ve heard of electrochromic moonroofs, but the Celestiq features four-zone variable-opacity roof glass. Likewise, an Escalade may have Super Cruise hands-free Level 2 driver assistance, but the Celestiq promises Ultra Cruise which claims door-to-door hands-free driving on virtually all paved public roads in America. Honestly, Ultra Cruise probably isn’t a bad idea considering some drivers may be distracted by the massive 55-inch LED infotainment display.

As for design, the Celestiq is certainly distinctive, and rather handsome when viewed piece-by-piece. The greenhouse has Sixteen vibes, the fastback has a hint of 1941 Sedanette to it, and the clamshell front end works beautifully. Truthfully, I’m waiting on seeing the Celestiq in person before passing judgment on styling cohesion as lighting seems fairly heavily manipulated in the press photos.

While detailed specifications of the Celestiq haven’t been released yet, I feel fairly comfortable speculating that Cadillac’s flagship will cost more than twelve dollars, pump out at least one horsepower, and get from a dead stop to 60 mph in under 100 years. The Celestiq will also likely have a range of more than four inches, weigh more than two grams, and have all the air inside the vehicle included as a standard feature. Expect more details on the Celestiq to drop later this year as Cadillac gears up for production.

Well, this story’s a bit shocking. Reuters reports that SMART Alabama, a Hyundai majority-owned stamping company that supplies Hyundai’s Alabama assembly plant, has been using child laborers to press out parts for vehicles like the Tucson compact crossover, Sonata midsize sedan, and Santa Fe midsize crossover. Reuters claims that SMART may be targeting migrant workers and their families, and that some underage workers are as young as 12 years old.

Reuters learned of underage workers at the Hyundai-owned supplier following the brief disappearance in February of a Guatemalan migrant child from her family’s home in Alabama.

The girl, who turns 14 this month, and her two brothers, aged 12 and 15, all worked at the plant earlier this year and weren’t going to school, according to people familiar with their employment. Their father, Pedro Tzi, confirmed these people’s account in an interview with Reuters.

Well, that doesn’t seem so good. I know it’s likely privileged to say that children should stay in school and be allowed to be kids, but stamping plants can be mildly dangerous places. What’s more, Reuters alleges that Tzi’s children aren’t isolated incidents.

Pedro Tzi’s children, who have now enrolled for the upcoming school term, were among a larger cohort of underage workers who found jobs at the Hyundai-owned supplier over the past few years, according to interviews with a dozen former and current plant employees and labor recruiters.

Several of these minors, they said, have foregone schooling in order to work long shifts at the plant, a sprawling facility with a documented history of health and safety violations, including amputation hazards.

Most of the current and former employees who spoke with Reuters did so on the condition of anonymity. Reuters was unable to determine the precise number of children who may have worked at the SMART factory, what the minors were paid or other terms of their employment.

Well, if this report is indeed accurate, this seems like a bit of a human rights violation considering there are age minimums for working around heavy machinery like stamping equipment. Needless to say, this will be an interesting story to follow, not only in terms of labor law but also in terms of consumer backlash. Then again, we as a society buy lots of stuff made in countries with less than stellar human rights records, so will the average consumer really care?

We’re past the mid-month mark, which means it’s time to take a look at the Manheim Index and see how the used car market is doing. While the Manheim Index isn’t perfect, bulk wholesale vehicle data from such a large wholesaler is a great way of tracking where the used car market is going. According to the latest data, seasonally-adjusted wholesale pricing is up by 0.7 percent across the board, but unadjusted wholesale values continued to fall through the first two weeks of July by 2.2 percent. In addition, wholesale values are predicted to drop a touch in the second half of this month.

Over the last two weeks, Manheim Market Report (MMR) prices saw higher-than-normal but decelerating declines. Over that time, the Three-Year-Old MMR Index, which represents the largest model-year cohort at auction, experienced a 1.5% cumulative decline. Over the first 15 days of July, MMR Retention, which is the average difference in price relative to current MMR, averaged 97.8%, which indicates that valuation models are ahead of market prices. The average daily sales conversion rate of 46.7% in the first half of July declined relative to June’s daily average of 51.3% and has been lower than the typical conversion rate this time of year. The latest trends in key indicators suggest wholesale used-vehicle values should see declines in the second half of the month.

Altogether, not bad news for anyone limping their current hooptie along in the hopes that used car values will seem less extraterrestrial in the future. While it’ll take a long time for used car prices to approach anything near normal, the chance of prices declining to an acceptable level in the next few years seems fairly good. For any car shopper, it’s really all about waiting for pricing that feels comfortable.

Germany’s Cheap Public Transit May Have Eased Some Roadway Congestion

I really hope I’m not alone here in loving cars but hating traffic. I live in Toronto, which is about one hour from Toronto in peak traffic. Highway 401 has long held a claim as the busiest highway in North America, to the point where it’s basically impossible to catch a speeding ticket when the sun’s shining on a workday. The highway just doesn’t move. However, Reuters reports that Germany has found a potential solution for roadway congestion – just make public transit really cheap at nine Euros ($9.21) per month.

While it is still early to draw conclusions, data compiled by the navigation company TomTom for Reuters suggest the policy may be having an effect.

During the week of June 20, rush-hour traffic congestion was down in 23 of 26 cities compared with the week of May 16, before the new ticket was introduced, the data show. TomTom chose the two weeks because they were both free of holidays.

“This decline is related to the introduction of the nine-euro ticket,” said TomTom traffic specialist Ralf-Peter Schaefer.

I won’t lie, I already use the subway if I have to pop out during peak travel hours because surface street commuting is so dreadful. Heavily-subsidized public transit accessibility is a good move, not just for people with cars, but also for people who can’t afford cars, want to get to work faster, or simply want to enjoy an adult beverage with the work crew after clocking out. Remember, public transit doesn’t have to make any money because it’s a public service, so it only really needs to break even once fare revenue and taxpayer funding is factored in. Let’s hope other jurisdictions follow Germany’s lead, for the sake of everyone who needs to get places.

Whelp, time to drop the lid on today’s edition of The Morning Dump. Happy Friday, everyone! The weekend is basically here, which means it’s almost car time. As such, I’d love to hear what car things you have planned. I’m personally doing some stone chip touch-up on the 325i and attending a local cars and coffee-style event. Nothing too massive, but sometimes it’s the little things that make life fun.

Thomas is a Nu Rave-blaring, heel-toe downshifting, maple syrup-swilling, chassis-geeking, junkyard parts-hauling, floppy-haired scenester who's been writing about cars since college. His current ride is a 2006 BMW 325i with the six-speed manual gearbox. Instagram: @thomas.hundal Twitter: @thomashundal
Read All My Posts »
PrevPreviousThe Advanced Driving Assist System (ADAS) Pissing Contest In China Is Huge And Complicated So Here Is Your Comprehensive Guide And Ranking
NextThis Provan Tiger GT Camper Is The Coolest Version Of The Legendary Chevy Astro VanNext