I love logo design. Before I was America’s eighth-least tolerable Automobile Dipshit, I was a graphic designer, and I really got excited by logos. Good logos are all about reduction and recognizability. They should be as legible when rendered in full-color on a Jumbotron as they are when stencil spray-painted on a wooden shipping crate. They’re design distilled to its absolute bare essentials, which can also mean that when they go wrong, they tend to go really wrong. Like Kia’s new logo, introduced in 2021, which seems to be so confusing to understand that 30,000 people every month Google “KN car,” because Kia’s new logo looks more like that than it looks like KIA. Luckily, it’s easy to fix, as we’ll show here with our official Autopian Technical Service Bulletin.

This eye-rolling and hilarious fact has been reported on by a number of outlets, but I think I first saw the number of confused searches in this tweet:

the new kia logo is so unreadable that at least 30k people a month search for the "KN car" ever since its debut pic.twitter.com/jRj25JoAPp

I remember when Kias with the new logo started to appear, and I think the only positive thing I heard was that the new look reminded people of fond memories of Nine Inch Nails:

So, there’s that. But that doesn’t change the fact that Kia’s new logo absolutely reads like “K-backwards-N.” I mean, I get that it’s fun to eliminate the crossbar of the A so it looks like a lambda, but in the context of this design vocabulary it just doesn’t work.

That’s not to say it’s not an improvement in some ways; the old Kia logo was, at best, boring. Here, let’s look at the history of Kia logos:

Man, what a journey! I kind of like the happy flag-waving of the 1986 logo, and that inverted-Q thing is pleasingly simple and cryptic. I think the real mystery here is why Kia didn’t just adopt the Korean “flying K” logo for global markets, since that is abstracted enough to not suffer from alphanumeric legibility problems. And it looks good, sort of evoking lightning strikes or knees bent mid-run or a pair of bird profiles in flight. It’s not bad!

Of course, a logo does not need to spell out a carmaker’s name; plenty of logos don’t, but we equate them with the brand just fine. Think about Mercedes’ tri-point star or Subaru’s stylized Pleiades or Peugeot’s lion or Audi’s four rings of the old Auto Union or a leaping jaguar, and so on. But what makes those logos different is that they’re not actively confusing. This isn’t about a non-wordmark logo, it’s a problem of a logo made of letters looking like the wrong fucking letters. If the Mercedes-Benz star looked like a P or something, it’d be weird, for example.

But, no, that’s not the path Kia chose. Instead it went with the confusing not-KN logo, and here we are. But you know me, I’m the kind of guy who’s going to change the 1157s in your taillight rather than curse your darkness. So, with that in mind, I think I have an easy solution to Kia’s logo problem. Just this minor tweak:

See? Easy! Now it reads like KIA again! And you don’t lose the stylized look or anything, it just breaks up the ᴎ-shape in the logo so it can read like two separate, recognizable glyphs. Even better, this change was specifically designed to be able to be retrofitted to all affected Kias on the road! In fact, our very own crazy designer of things, The Bishop, spent some crucial procrastinating time mocking up the packaging for this service part and the required technical service bulletin and inevitable recall notice: 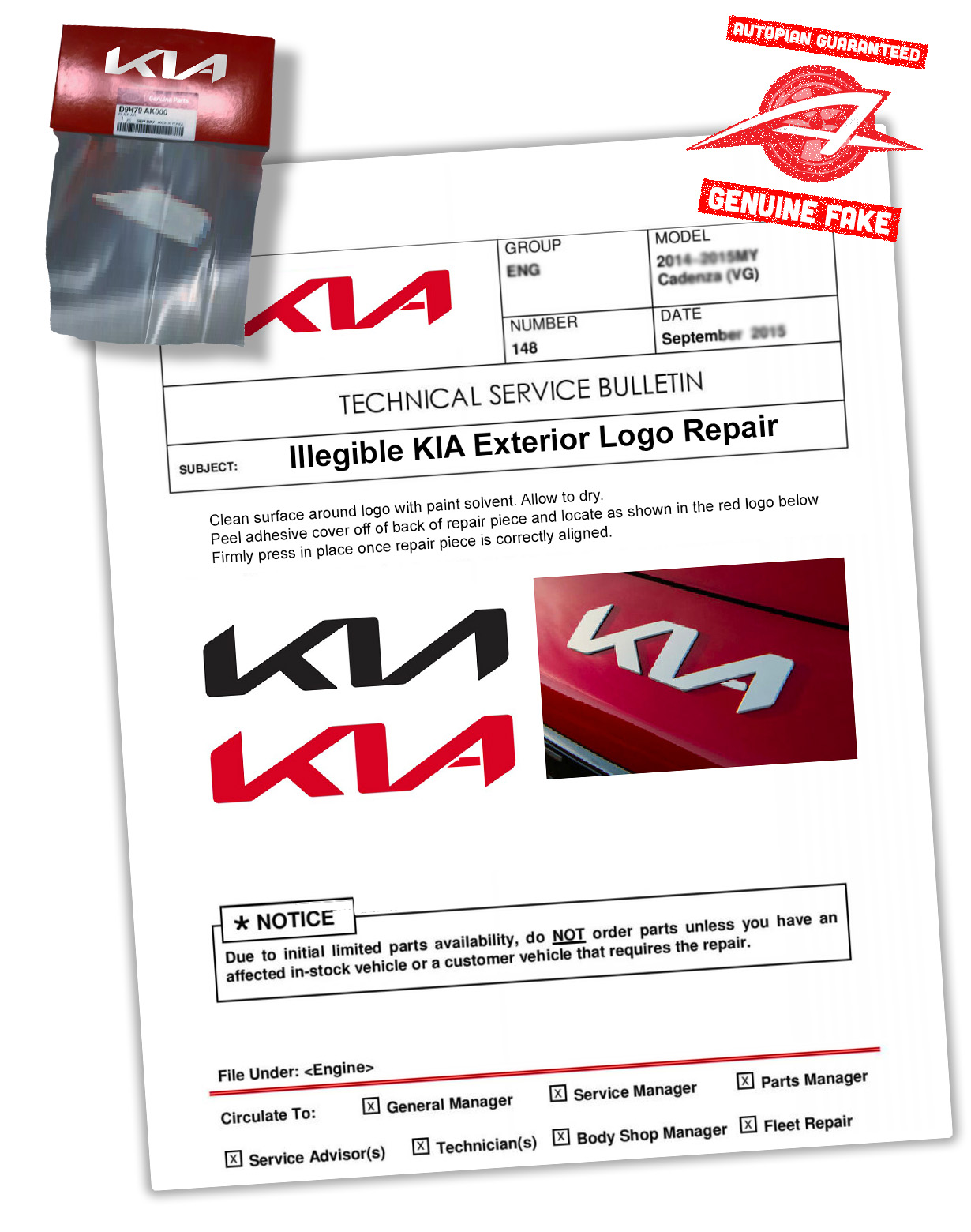 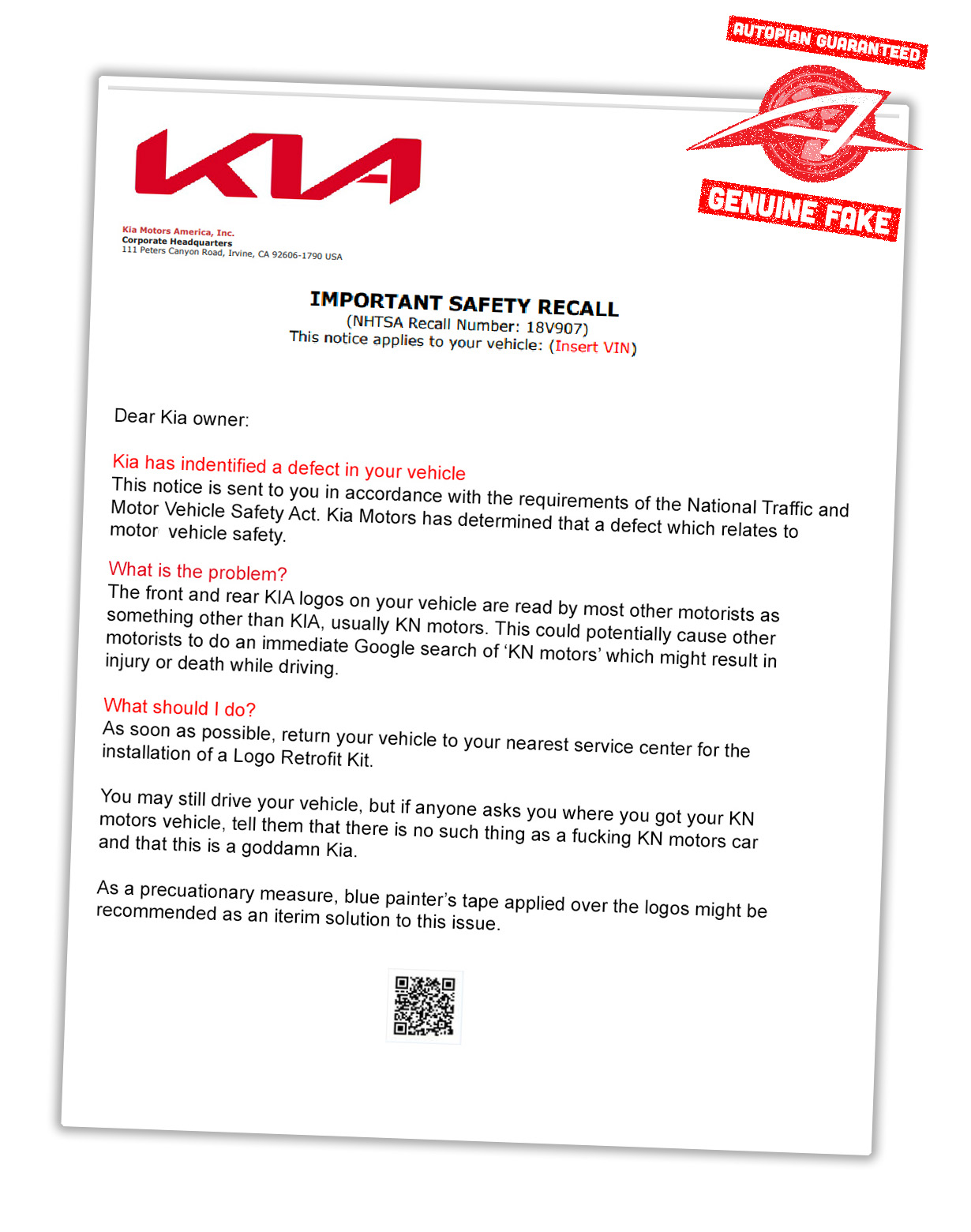 Look at that, Kia! We got your back! Now go call your supplier of adhesive-backed-chrome-look things and tell them you need a little hyphen-shaped deal and get the ball rolling.

I'm a co-founder of the Autopian, the site you're on RIGHT NOW! I'm here to talk to you about taillights until you cry and beg me to stop, which I absolutely will not. Sorry. Hug? Also, David's friend.
Read All My Posts »
PrevPreviousAn Autopian Reader Is Selling A ‘Holy Grail’ Manual Jeep Grand Cherokee And Someone Who’s Not Me Should Buy It
NextTen Car Detailing Products To Make You Skip The Armor-All Gift Pack This Holiday Season – Autopian Gift GuideNext