Every Rolls-Royce is supposed to be three things: exclusive, luxurious, and superlative. There’s no reason why this can’t be achieved with an electric car and the brand’s first EV, the $413,000 Rolls-Royce Spectre is certainly all of those things. It also looks kind of boring.

Rolls-Royce calls this an “Ultra-Luxury Electric Super Coupé” and fits the role played by the Phantom Coupé, which explains why it looks exactly like a Phantom Coupé. The great success of Rolls-Royce has been due in large part to making exceptional cars that still feel very much like the cars they are supposed to be.

Perhaps it’s the misfortune of debuting next to the stunning and wild Cadillac Celistiq, but the weight of tradition bears down so overwhelmingly on the Spectre that we’ve ended up with a car that I am sure is phenomenal and also doesn’t move me (though I am not the intended audience and based upon the interior colors I’m assuming the first car was purchased for the rich baron Lord Ronald McDonald).

“The Most Perfect Product That Rolls-Royce Has Ever Produced”

That subhead is a direct quote from Rolls-Royce CEO Torsten Müller-Ötvös and he’s probably correct. The modern EV can be a car but, often, it’s a product. A device. A toy. This is fine! A Miata is a tiny-corner-tossy-roadster toy. The Spectre is a giant luxo-barge-y-coupe-y-yachty toy. Both can act as cars, but that’s less the point.

Rolls-Royce refers to the car’s “indulgent proportions” and they ain’t lying. Let’s compare this to the most obviously similar EV, the Ford F-150 Lightning.

Rolls-Royce has not revealed the motor location or even how big the battery is, which is curious, but some combination of battery and motors provide 664 lb-ft of torque and 577 horsepower and an estimated range of 320 miles on the WLTP test, which is probably around 260-270 miles of range using the EPA scale. None of those numbers are that great, are they? Even the BMW iX M60 has more range (280 miles) and more power (610 hp).

It’s still a Rolls-Royce (he keeps telling himself) so the small details are big details. It has the widest grille ever put on a Rolls-Royce and I’ll let them explain how that works:

From the front, Spectre’s split headlight treatment is intersected by the widest grille ever bestowed on a Rolls-Royce. The vanes of the Pantheon grille are now smoother in section and a flusher fit, designed to help guide the air around the motor car’s front.

The relaxed angle and polished stainless steel finish of the grille does much to enhance Spectre’s presence using environmental reflection. Along with an aero-tuned Spirit of Ecstasy figurine – itself the product of 830 combined hours of design modelling and wind tunnel testing – the grille enhances the motor car’s unprecedented drag coefficient, which at just 0.25cd makes Spectre Rolls-Royce’s most aerodynamic motor car, ever.

Oh yeah, that’s right, they redesigned the Spirit of Ecstasy (the tiny person mounted to the top of the grille) to make it slightly less ecstatic and more aerodynamic. The grille is also back-lit by 22 LEDs.

If you like lights, by the way, Rolls-Royce does this thing where they put little stars everywhere. Usually, those stars are reserved for the headliner, but the Spectre’s doors have 4,796 “softly illuminated stars.” You know that bit in “Silicon Valley” where the annoying investor complains that he wants doors that “open like this” and not “billionaire doors” that open in an interesting way? That’s what this car is.

Your rich, trust-fundy heir friend shows up in her Phantom after tossing soup on a Van Gogh or whatever and the Phantom has a series of constellations on the roof and then you open the doors to your Spectre and go “Sorry, suckah, I got the Milky Way on the freakin’ doors” and then your friend laughs and you laugh because nothing really matters when you have a safety net below you made of webbed titanium.

Some other little details? There’s a “Planar” suspension that was tuned along the French Riviera because that’s where this thing will be driven. In order to enhance the car’s “magic carpet ride” it now includes automatically disconnect-able sway bars! Not for off-roading, of course, but for when one side of the car experiences an undulation.

Rolls-Royce didn’t reveal a price for all this, but ABC News says it’s $413,000, which sounds about right. I’m sure your local Rolls-Royce dealer will take your order now, but delivery isn’t until Q4 2023 so you’ll just have to drive one of your many other cars until then. 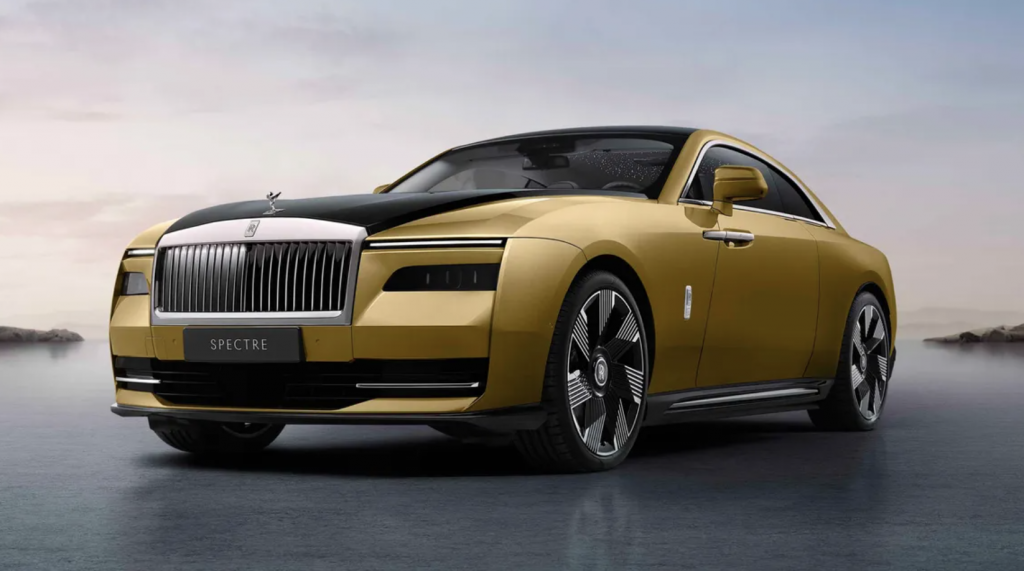 I’m probably being too harsh on this car. I bet it’s lovely to drive. I’ve driven a couple of Rolls’ cars and all the feelings one has when contemplating it (“Maybe these people should be the first against the wall”) kind of evaporate and are replaced by other feelings (“Maybe I do pay too many taxes…”).

An electric powertrain, of course, perfectly suits Rolls-Royce, and this should be the quietest and most comfortable car they’ve ever built, if you’re into that sort of thing.

Howdy! I'm the Publisher of The Autopian which means I'm to blame for at least a small part of this. I used to run another car site and then made movies and TV shows. Now I'm here to convince you to buy a Peugeot.
Read All My Posts »
PrevPreviousLittle Stickshift Trucks: 1993 Ford Ranger vs 1998 Chevy S-10
NextThe Most Expensive Cadillac Ever Is Over $300,000 And It’s An EV Called CelestiqNext