What Would Modern Cars Look Like If America Still Only Allowed Two Kinds Of Headlights?

This next one might seem strange to you, until I mention that it’s part of a homework assignment for Professor Torch; then it will seem perfectly fine. It’s sort of like when people look at a Citroen 2CV Van or a Renault Avantime and scratch their heads until someone says “it’s from France.” After that, they just relax and nod in understanding. It’s about headlights, specifically old-school sealed beam headlights that only came round or rectangular, and what the automotive landscape would look like if that’s still all anyone could use. Would it be grim or wonderful? Let’s find out.

Jason has written about this next thing before, often from a cost perspective, but now he’d like me to look at an alternate, improbably visual reality. Because of course he does. 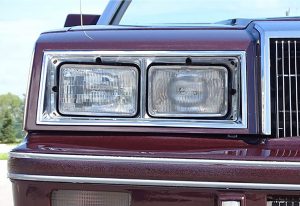 Let’s go back to what we are now calling part of the “Malaise Era,” the early 1980s. There were many issues that were bothering Americans from the Iran hostage crisis and poison Tylenol to absurd inflation and fifteen percent interest rates. However, as a junior high student I really didn’t give a shit about any of that. I was concerned with far more important things…like the fact that composite headlights were still banned in the United States…even though I couldn’t drive yet or own a car.

It might seem hard to believe to anyone under the age of forty, but before the 1984 model year any vehicle sold in the United States was required to use off-the-shelf, standard sized headlamps called sealed beams, either round or rectangular units of set dimensions (either two or four units each..larger ones were allowed when using just a pair). 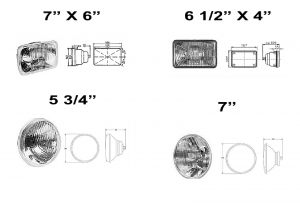 Headlights that formed to the shape of the car itself, even if they used standardized bulbs like they do today, were strictly forbidden. The results of this law really came into play when manufacturers of European and Japanese cars designed with these custom-shaped lights – commonly known as composite light fixtures – wanted to import them into America.

These lovely, aerodynamic, design-conscious headlamps would need to be ditched and replaced by some form of unit that incorporated the approved rectangular or round sealed beams (or simply have hidden or pop-up headlamps, as was often the case in low-nosed sports cars). There are many, many examples of this switch, but this Audi 100/5000 illustrates it perfectly:

Even the American manufacturers seemed to be stifled by these regulations, as seen of this Mustang SVO that is DYING to get full composite lights, which it eventually did after the law was FINALLY changed for the 1984 model year.

Ah, but this is The Bishop, so you just KNOW that my boss Torch is going make me take this off the rails into an alternate reality, right? What if, in 1983, lobbyists for Sylvania or some other proponent of standard sealed beam…let’s call it the PUMASS (Pop Up Motor and Sealed Systems) group… had successfully bribed congress and the NHTSA to keep the ban on composite headlights…and did so for four more decades? What would cars look like today? 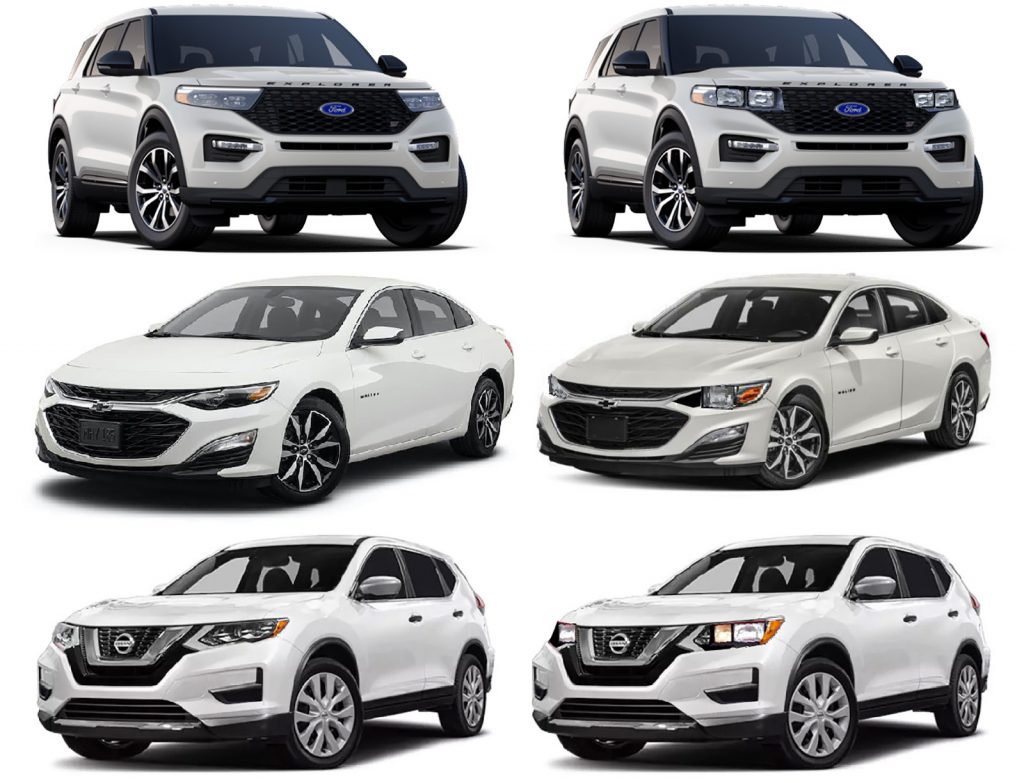 That’s with off-the-shelf rectangular lights, and here’s the same cars modified with round sealed beams:

Whoa! Much of me hates these sealed beam mash ups. Just like back in the 1980s, the boxy shapes of the lights are at odds with the sculptural form of the car, and they violate the aerodynamics of the nose (remember, American regulations even banned clear covers over sealed beams). Still, at the same time, I can’t help but think that these mandated sealed beam lights seem to be adding more personality to these rather generic-looking cars. What is going on here?

Jason thinks it might be a nostalgia thing for old-ass people like ourselves. He could be right, but if I had to guess I would say that the common size of sealed beam lights is, in some way, akin to the fact that the eyes on all human beings are similar in size and in location…so sealed beam cars always had a ‘face’.

What we are seeing is essentially anthropomorophism…applying human characteristics to inanimate objects (in these cases at least the eyes are at least in the CORRECT position as opposed to the Cars movies which our man Jason has complained about before). Conversely, by forming to the shape of the body, today’s composite lights blend in and become just another piece of trim on the front of a car, and not the ‘windows to the soul’– so most modern cars do not have a traditional “face.” Either that, or the face is hard to decipher.  Look at the vehicle below…which ones are the “eyes?” 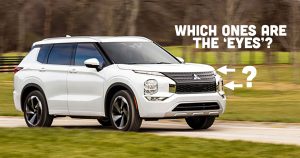 Damn…listen to that shit…I’ve been hanging around Torch too long, haven’t I?

Back in the old days, sports cars were most affected by the mandatory sealed beam laws. Retractable lights were essentially on these vehicles and would continue to be required if the composite light ban was never lifted.

However, pop ups on current cars might not be as bad as we would at first fear. Sure, they’re an aerodynamic nightmare when open, but when retracted doesn’t it allow for a truly clean look? Is it possible that more sheet metal/body color on the nose is letting the basic shape of the car be more visible and uncluttered?  Does it help to differentiate between sports cars and run-of-the-mill sedans? Even the thinnest LED fixture today can’t be as small as no light fixture visible in the daytime at all, and there are still headlight height regulations in all states.

Let’s look at an affordable sports vehicle first in our alternate reality:

source: US News and The Bishop

This Lotus starts to look like a competition or concept car with pop ups down:

Even a Ferrari could work with retractable lights; now the intake vents on the tops of front and rear fenders seem similar, and the car seems lower and leaner than before. Not to mention that despite how expensive any other parts on the car will be, the headlights themselves you could still pick up at AutoZone.

So maybe if the sealed beam lobby had held, it could have inadvertently added more personality to today’s cars.  However, if every one of them had sealed beam headlights, car facades could still end up generic, just bland in a way different form… a sort of transmogrification of the Late Post War Car Face.  Remember when Homer Simpson designed a car?  He wanted to put an orange ball on EVERY antenna to help him find his vehicle in the parking lot. Same issues here.

Overall, I’m a bit torn.  I don’t regret being all about the composites back in the day…but the blank stares that you get from truly faceless vehicles today has me questioning what I wanted.  Is it a case being careful what you wish for?