Sometimes I love to look back at General Motors’ incredible history of innovation outside of passenger cars. Aside from the handsome Rapid Transit Series bus and iconic New Look bus, the General produced workhorse trucks and even an RV. The GMC Motorhome is one of the most innovative RVs in history, but if you want one today, you’re basically stuck in the 1970s. That is, unless you’re like one GMC Motorhome owner and spend over a half million dollars in turning one into a modern day RV.

If you haven’t noticed, we absolutely adore the GMC Motorhome here at the Autopian. So when I saw this at the RV/MH Hall of Fame during the RV Open House I was drawn in like a mosquito to a bug zapper. 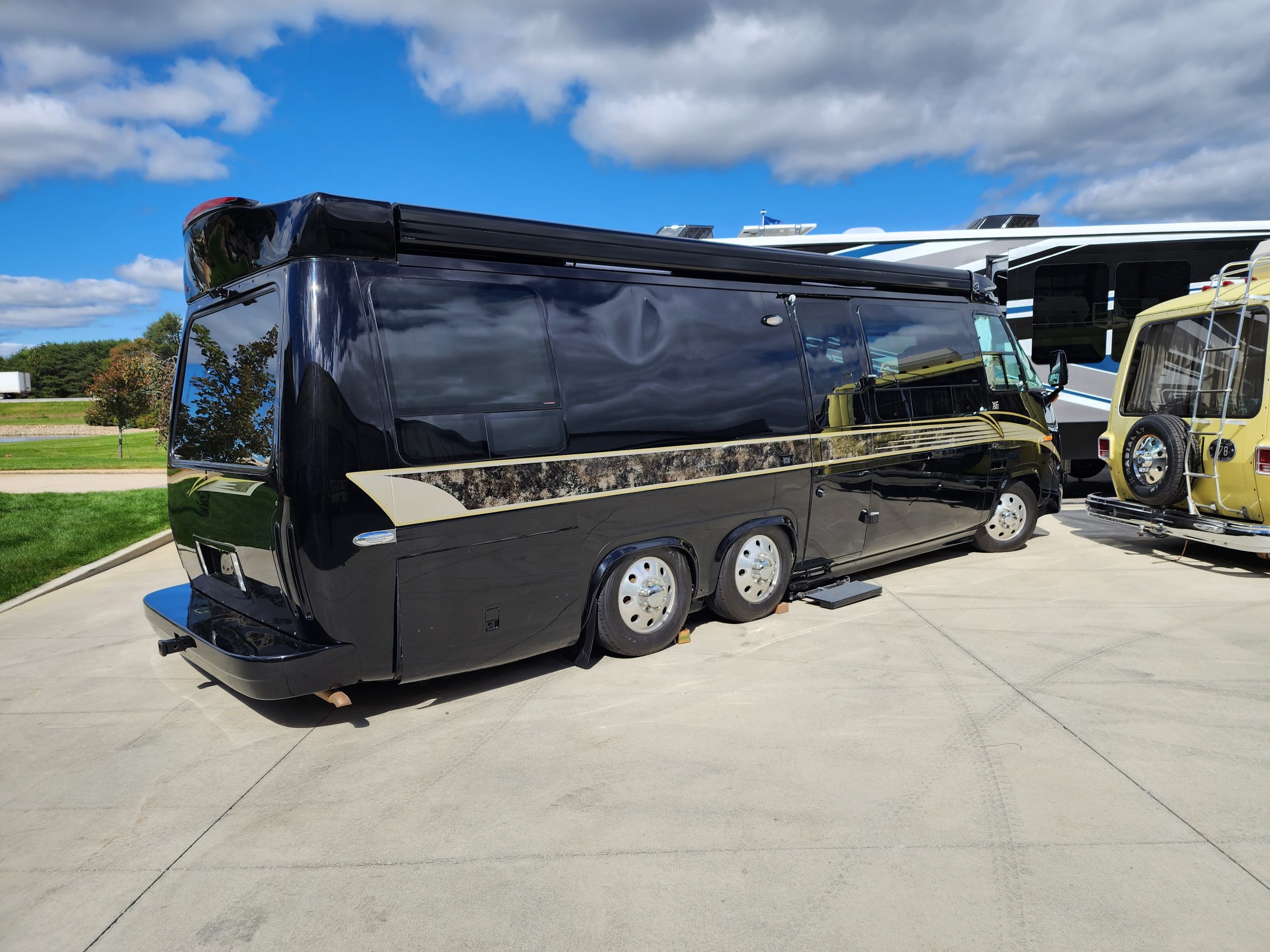 The exterior alone looks like it could have rolled off of a General Motors factory line in 2008, and the interior looks better than most of the far newer rigs that were at the show. The level of craftsmanship put into it is staggering.

As the Family Motor Coach Association’s Family RVing writes, this Motorhome (some GM publications write the name as “MotorHome”) was the creation of Bob and Janet Prince and a designer, Josh Gifford. As the publication writes, the Princes traveled in a 45-foot Prevost coach and decided that they wanted to downsize. But they didn’t want to just go smaller; the Princes wanted the small RV that would replace their Prevost to be just as luxurious. That’s a tall order, as in the RV world you won’t often find small rigs with the hyper-luxury of a big bus. 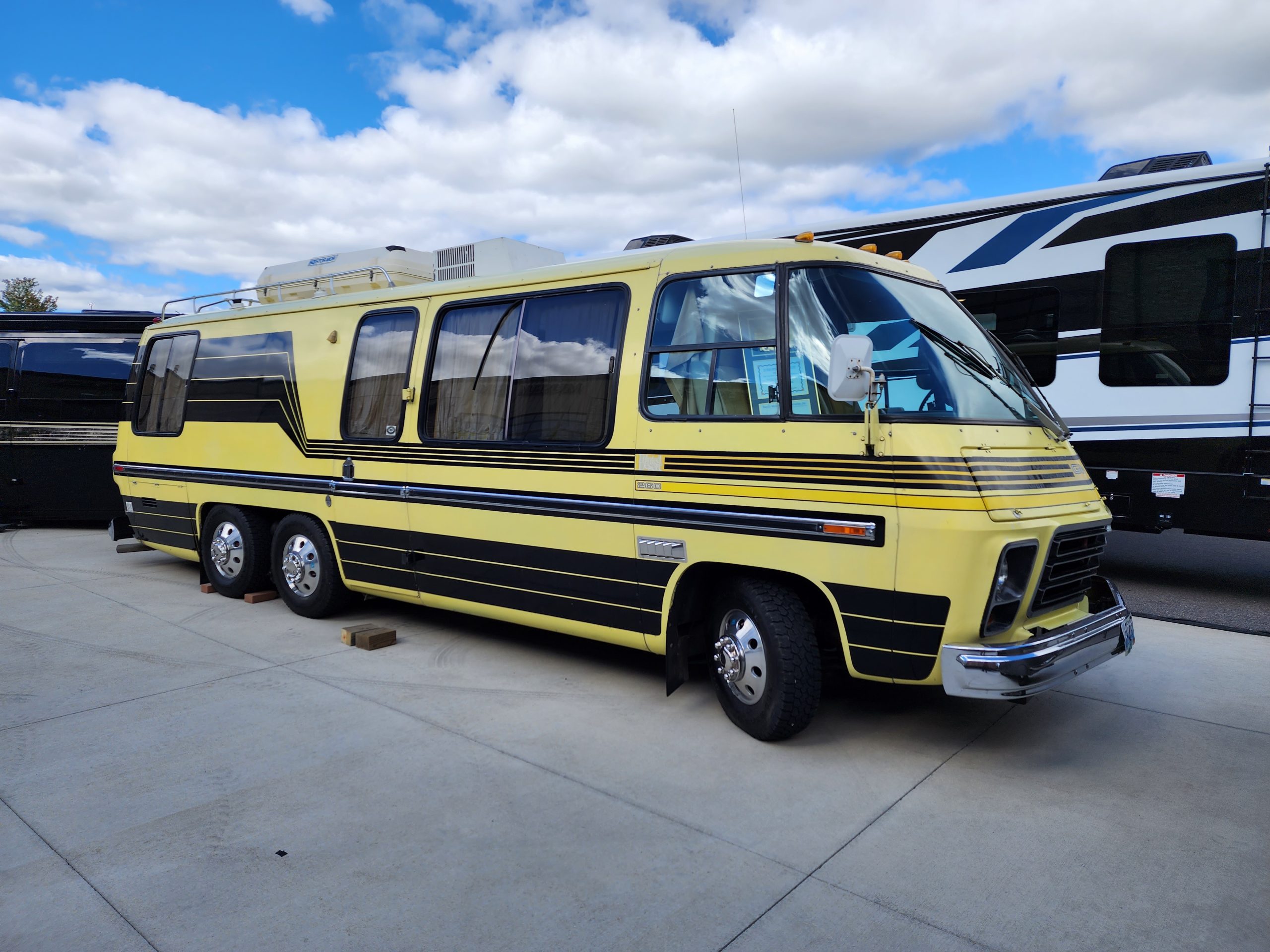 That’s when the Princes found their candidate. Found next to a dumpster, this 1977 GMC Motorhome sat on flat tires with a rotting awning, peeling paint, some rust, and even current furry residents eating things up. The Princes picked up the broken Motorhome and started brewing up a plan that reminds me of when the Bishop, our own Daydreaming Auto Designer, reimagined the Motorhome. Here’s a quick reminder of why the Motorhome is so important for RV history:

The state of RV design in the early 1970s was crude, even the good ones like Winnebagos: corrugated metal, pink insulation, boxy, curve-less designs on heavy chassis. They were charming, but crude as hell.

GM took a clean-sheet approach, and attempted to make something that was better than driving a giant shed, and at least attempted some degree of aerodynamics. The company took its tidy front-wheel drive V8 powertrain from the Oldsmobile Toronado and Cadillac Eldorado and plopped it down in a bespoke chassis with a nice low floor, no driveshaft, and plenty of room for fuel, fresh water, and disgusting water tanks, and then dropped on that an extruded aluminum frame covered with fiberglass and aluminum body panels.

The rear had twin axles with independent air suspension, and the result was something roomy and comfortable and not horrible to drive.

Sadly, if you want one of these, the newest ones you’ll find will still be at least 44 years old. Production ended in 1978 after GM ran out of Oldsmobile Unitized Power Packages to mount into the Motorhome. And if you’re not into vintage campers, that means buying something newer. Or, like the Princes, you get on the horn and call your designer acquaintance of several years. 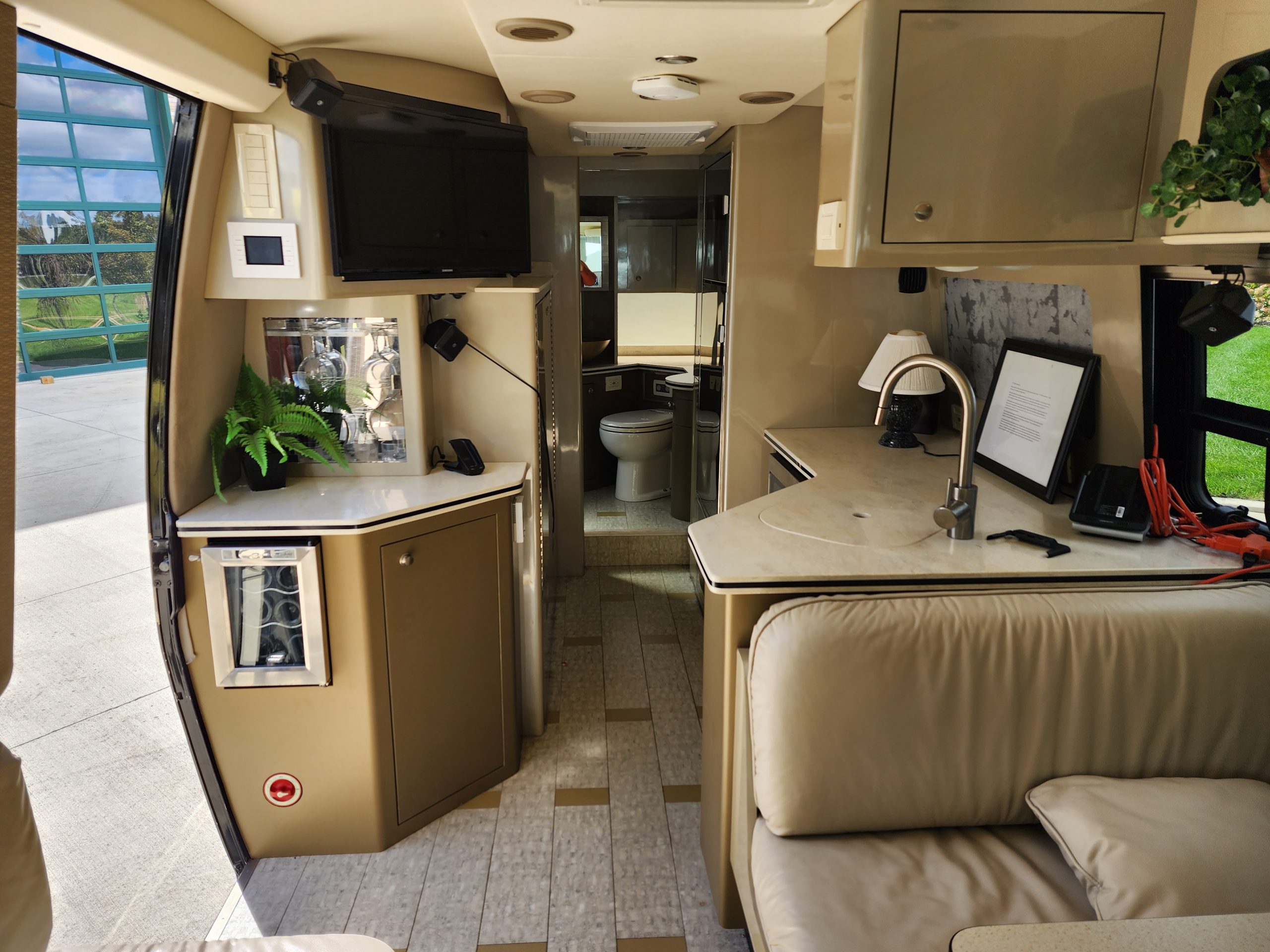 Gifford, the president of Ohio-based Creative Mobile Interiors, specializes in custom vehicle interiors. The company makes all kinds of custom vehicles from mobile offices and rolling retail showrooms to custom RVs. CMI will even build up an RV from just its bare body, which is pretty much where Gifford started with this Motorhome. The Princes called up Gifford right before Thanksgiving 2013 and informed him that the GMC was headed his way.

By the time that the GMC arrived, GMC Motorhome specialists Cinnabar Engineering had gone through and restored the chassis and the entire drivetrain. That left Gifford to build out an interior, and the Princes were looking for something state-of-the-art. The couple let Gifford run free, so long as the finished product had a full-size washer and dryer as well as a bathtub. Gifford offered the Princes some layouts to choose from, they chose one of them, and the project was given the green light. 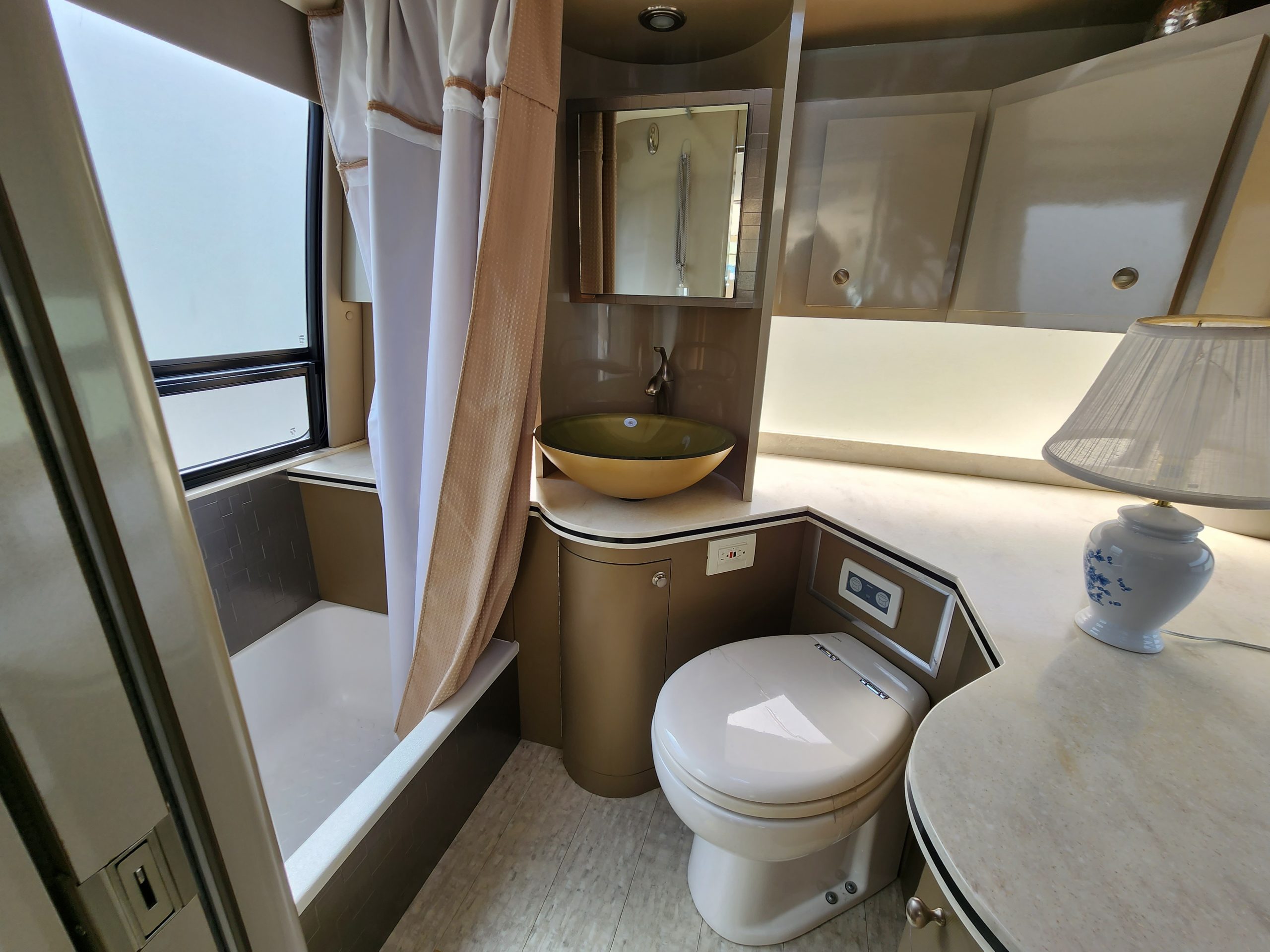 Given the size of the washer and dryer, Gifford started there, using CAD software to find the optimal spot in the RV. From there, he built out the rest of the rig. Of course, scaling a 45-foot Prevost down to a 26-foot GMC is a pretty huge task, and certainly, something is going to have to get written out of the design. The back of a GMC Motorhome would typically have a bedroom, but that wasn’t going to fit given the laundry and bathroom needs. Thus, the bathroom takes the space where the bedroom would be and the Princes had to settle for a dinette that turns into a bed. 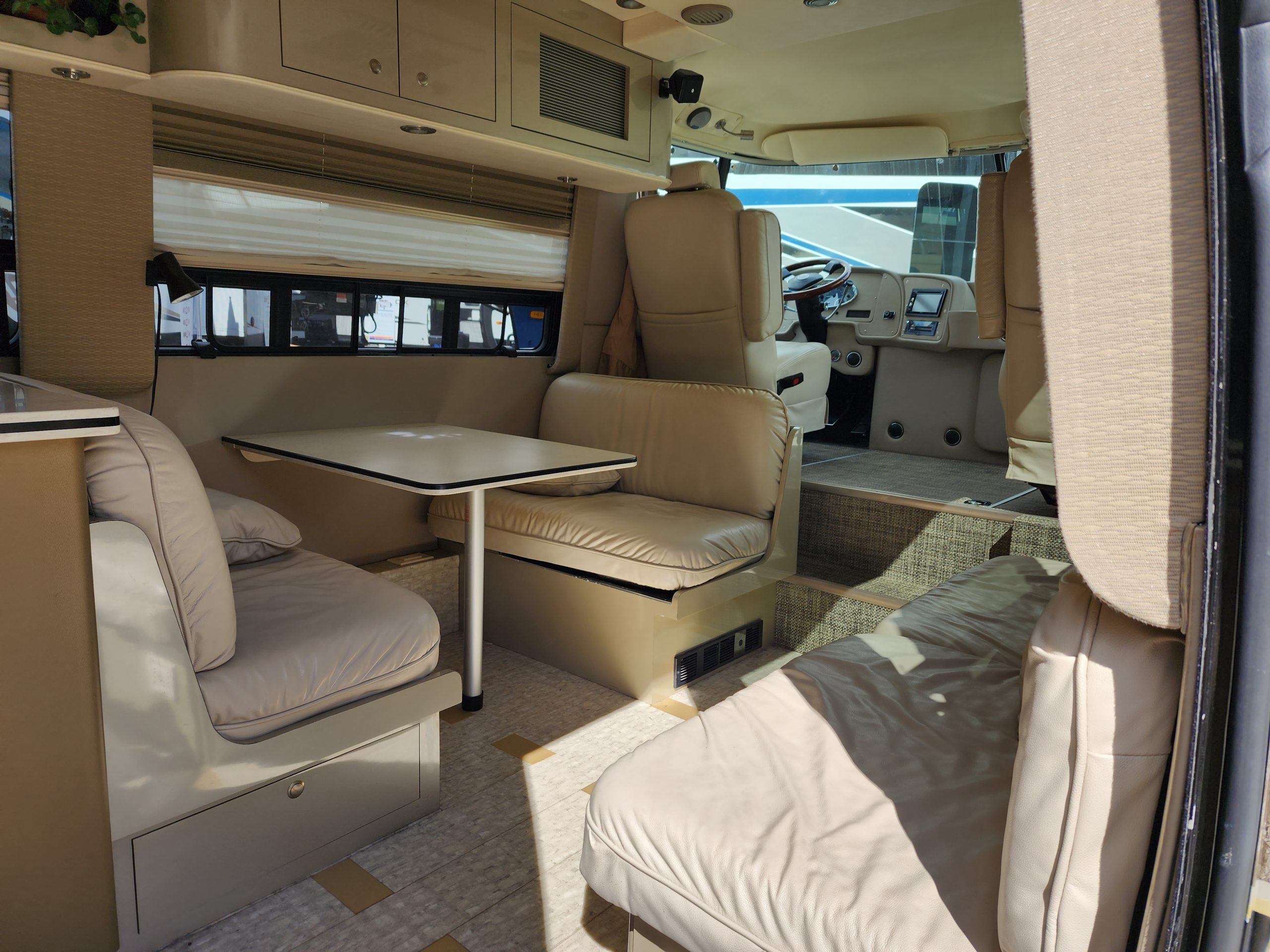 Instead of the wood veneers that you’d normally find in an RV, Gifford opted to give the interior a high-gloss finish. I love this move, because even though this was built over seven years ago, the interior feels like it could have been ripped right out of one of the million-dollar monsters I toured at the show.

Most of the bits not covered in the high-gloss finish got cushy, fine leather.

Even parts of the ceiling are leather. Gifford seemingly made sure that any piece that you could look or touch felt like a quality piece. Aside from the small bathtub and laundry equipment, the Motorhome includes a wine refrigerator and LED lighting. HVAC is controlled by a smart thermostat, and the TV, satellite, lighting, HVAC, and generator can be controlled from an iPad, just like a modern rig. It even has a heated floor.

Outside, the GMC was also modernized. Up front, Gifford grafted on front end bits from a 2008 Silverado. 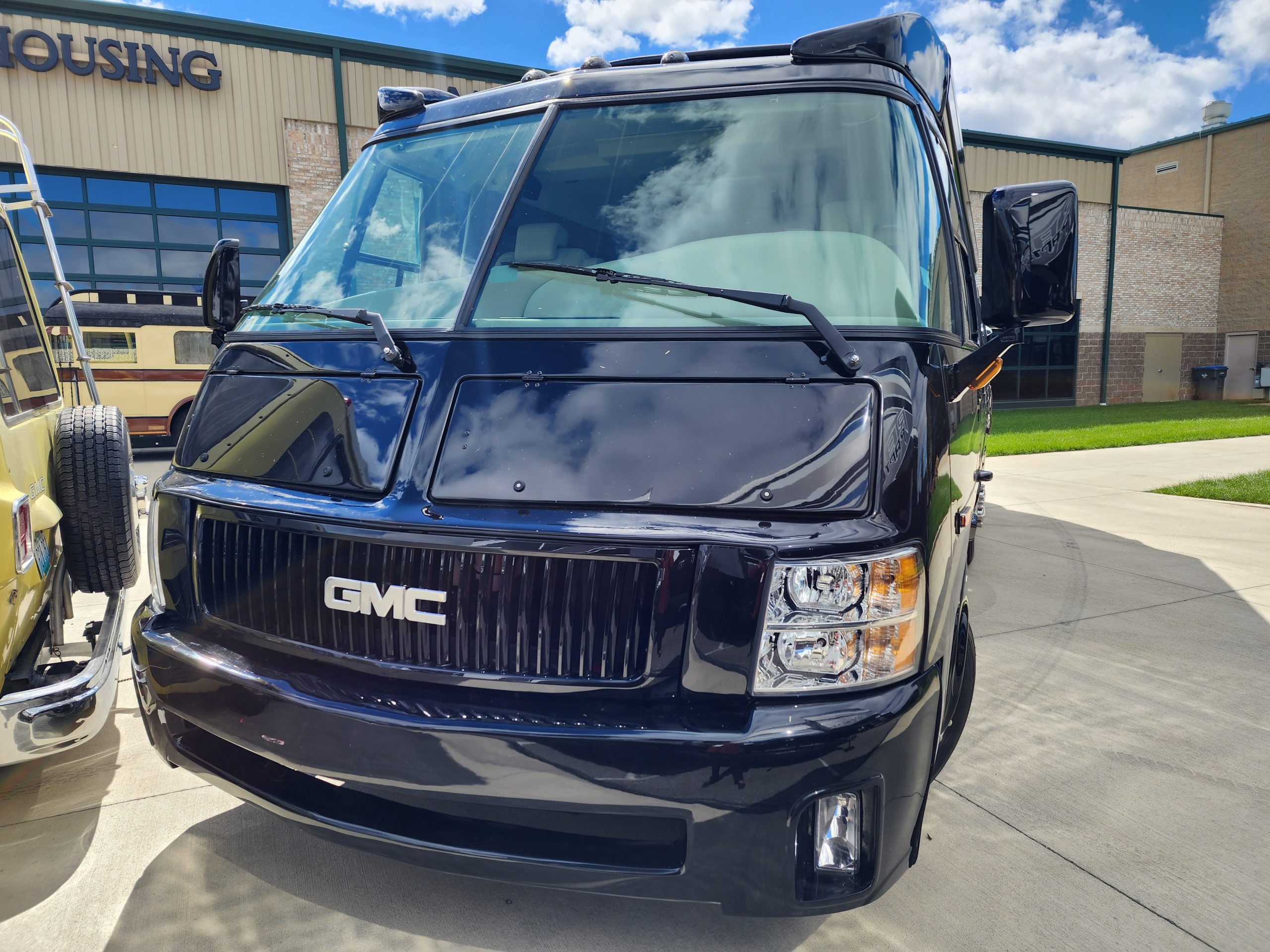 Cadillac parts bring up the rear. Gifford says that to fit the smaller front end of a Silverado on the Motorhome, he had to widen the Silverado’s fascia by eight inches. Gifford then made custom end caps and fairings to further build out the design. 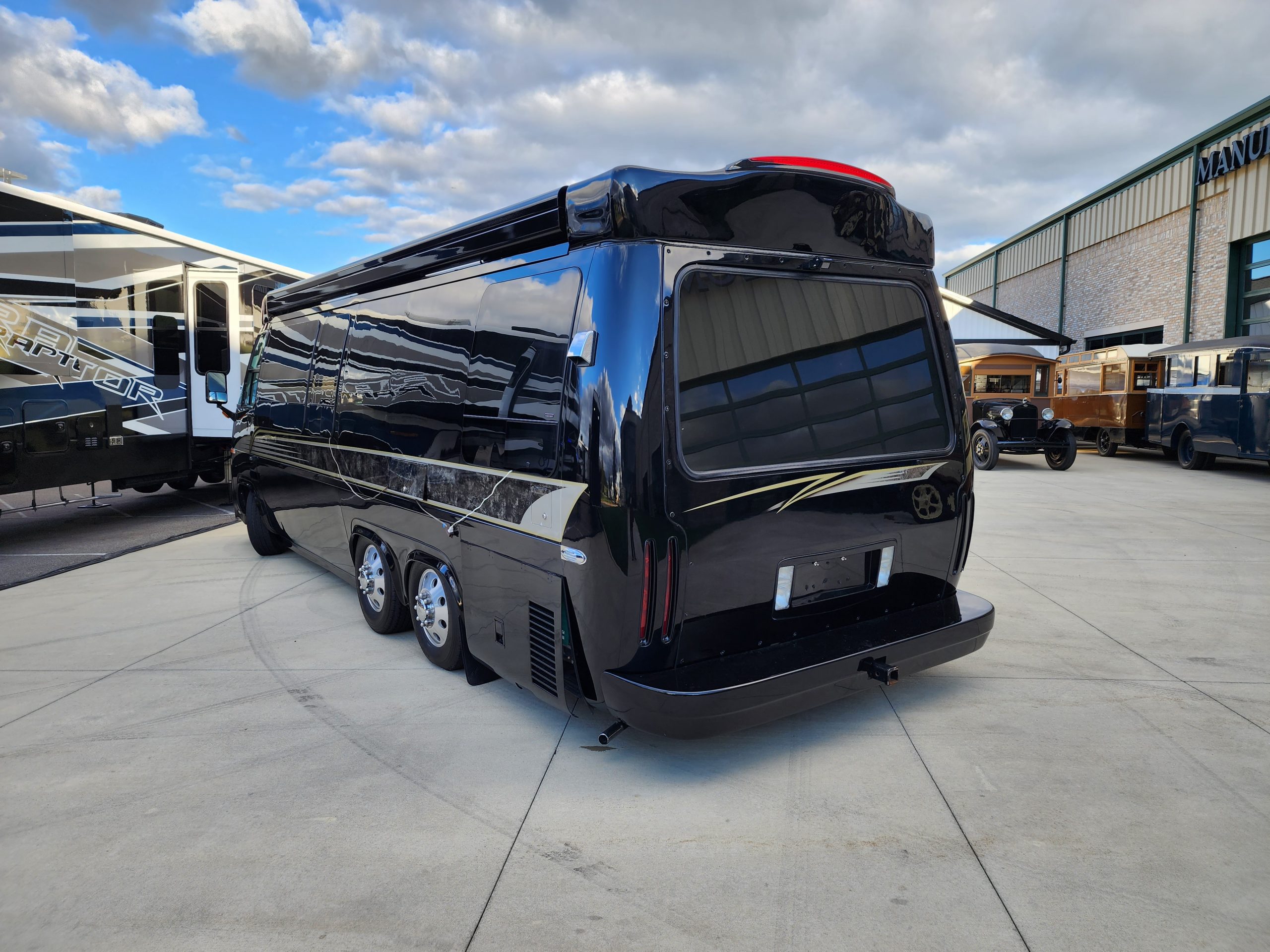 Rounding out the exterior are mostly-flush windows, new awnings, and a killer paint job. The Princes decided on a paint scheme featuring a metallic black that shines like glass. The paint is accompanied with some graphics. To me, it really does look like a GMC Motorhome built in 2008.

The build reportedly took over two years, and despite the challenges, Josh Gifford calls the GMC build a dream job. After touring it myself and witnessing the quality of this machine, I think you can tell that he really put his heart in it. This Motorhome has a fit and finish better than many million-dollar houses that I’ve toured. 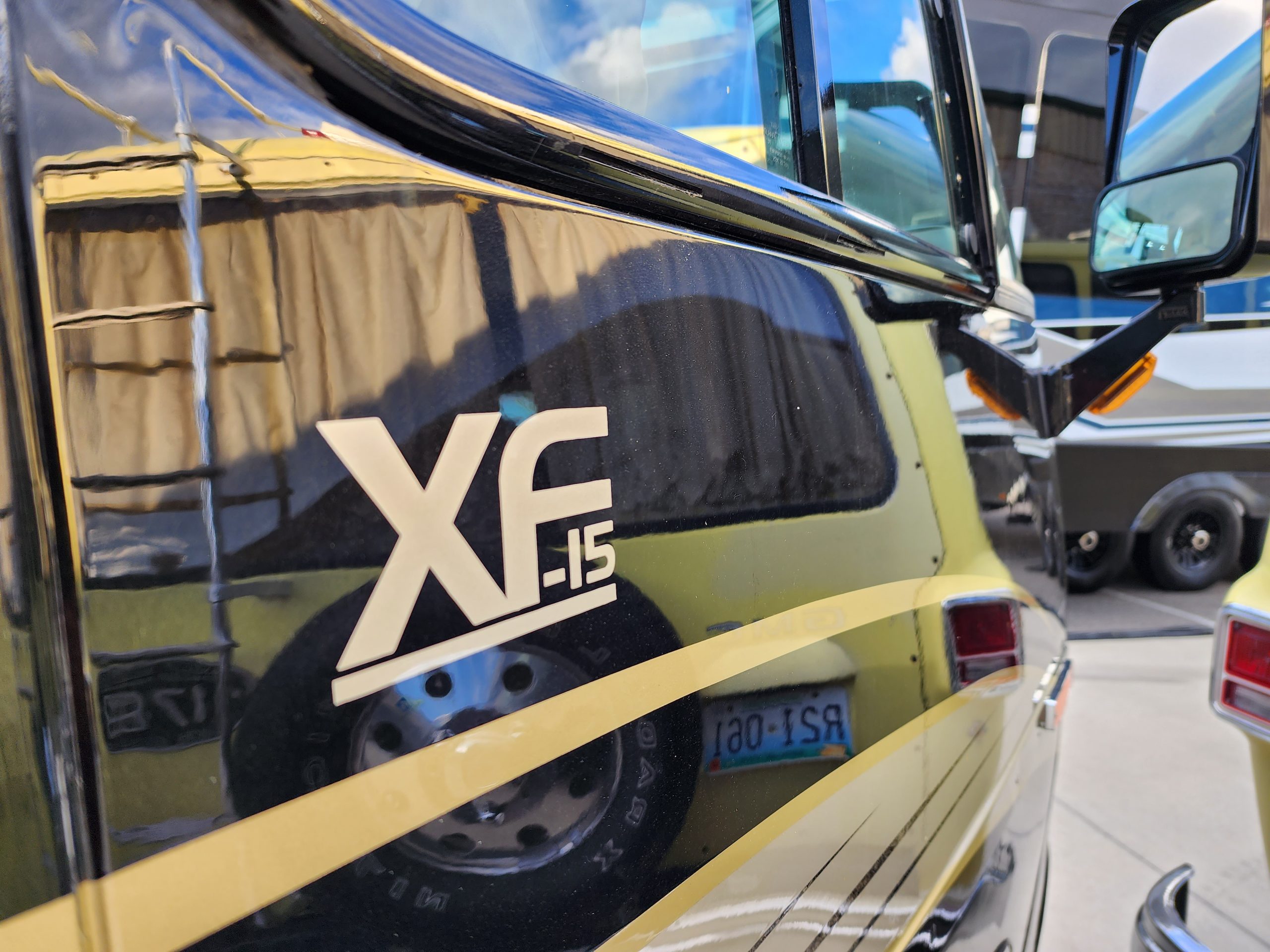 The Princes apparently spent over a half million dollars on it, and $100,000 alone went to the exterior paint. Honestly, this is one of those few instances where I think you could track where every dollar went. That’s how good it’s built. Unfortunately, while Gifford’s work was awesome, the GMC didn’t ride as comfortably as the Princes expected. And instead of selling it, they just donated it to the museum. Now, RV enthusiasts on their way through Elkhart, Indiana get to see this incredible work in person.

Mercedes is a lifelong fan of all things powered by an engine. When she isn't driving one of her five Smart Fortwos or her 14 other vehicles she could be found in the cockpit of a Cessna 172 or perhaps swimming in any body of water that she could find. She also has a deep love for buses of all kinds. Please send her buses. mercedes@theautopian.com Instagram: @mistymotors Twitter: @Miss_Mercedes30 Facebook.com/neonspinnazz
Read All My Posts »
PrevPreviousThe Cute Modern-Isetta Microlino Is Getting An Even More Adorable Fiat Jolly-Inspired Beach Car Version
NextWhat Would Modern Cars Look Like If America Still Only Allowed Two Kinds Of Headlights?Next