After years of waiting, residents of European countries are finally getting their hands on what’s possibly the most adorable modern microcar in the world. Production and deliveries on the Microlino have started, and the company already has some neat ideas for the future. The Microlino will be joined by a little three-wheel scooter called the Microletta and a beach car inspired by the Fiat 600 Jolly.

A few of us at the Autopian have been following the Microlino story for years. Jason first wrote a breakdown about the electric microcar back in 2016. Back then, Micro Mobility Systems, the Swiss company building the Microlino, was just a year into development of its microcar. Founded in 1999, Micro started off by selling a kick scooter. In 2013, Micro launched an electric scooter. The Microlino’s development has been chock-full of delays and twists, including a redesign from a modernized version of the 1953 Iso Isetta to what now looks like a future Isetta. 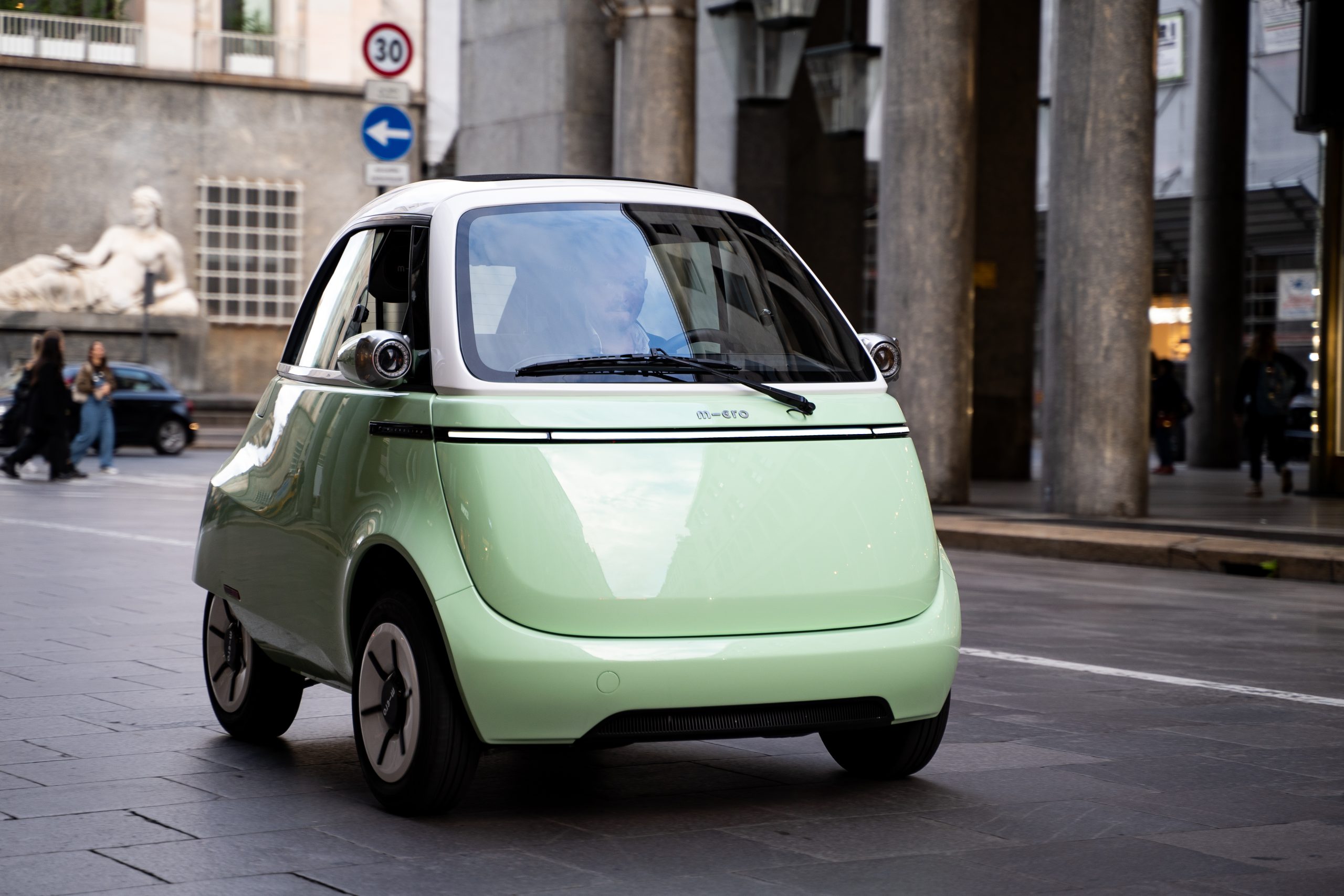 But, five years past the original release date, the team at Micro actually pulled it off! The company says that the first Microlinos are getting delivered. These are launch edition examples called the Pioneer Series, limited to just 999 units. Gucci CEO Marco Bizzarri was one of the first to get a Microlino. The rest of Europe will have to wait until the calendar rolls over to 2023 before they’ll see their Microlino get delivered. Until then, they can come to the Paris Motor Show, where they can see the current Microlino and Micro’s neat ideas for the future.

The Microlino has evolved quite a bit through the long wait. Under the revised skin are new bones. The Microlino 1.0 prototype featured a steel tube frame. The production version, called the Microlino 2.0, has a pressed steel and aluminum unibody safety cell. 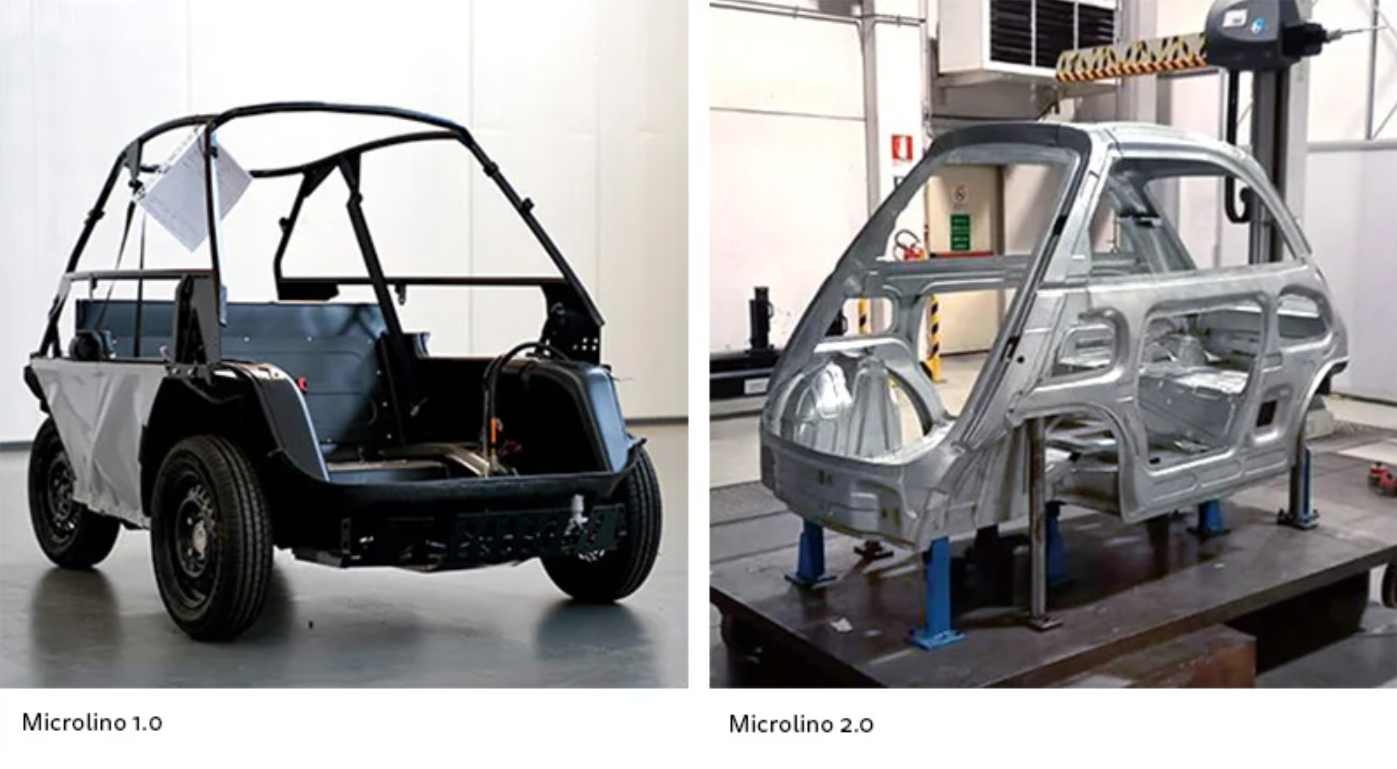 The powertrain has been revised a number of times, so I’ll just compare the Microlino 1.0 prototype to the Microlino 2.0 that’s in production now.

Top speed of the production model remains the same as the prototype at about 55 mph. The 20-horsepower electric motor is gone in favor of a more efficient 16.7-horsepower unit capable of 25.4 HP bursts. The 15 kWh battery of the original was good for a range of about 60 to 75 miles of range. While the new batteries — 6 kWh comes standard, with available upgrades to a 10.5 or 14 kWh pack — are smaller, Micro says that they pack a better punch. The 6 kWh pack is good for 56 miles with the 10.5 kWh pack coming in at 108 miles. The biggest 14 kWh pack is good for about 143 miles.

Those are actually pretty good specs when you consider that the thing costs just $15,000 at current exchange rates. Part of that is because the Microlino falls under Europe’s L7e heavy quadricycle category, which doesn’t require crash testing. Micro wants you to think of a Microlino as a bridge between a full car and a motorcycle.

Also in Paris is a version for young drivers called the Microlino Lite. [Editor’s Note: I suspect this one would fall under the sans permis category they have in France that allows for people as young as 14 to drive – JT] 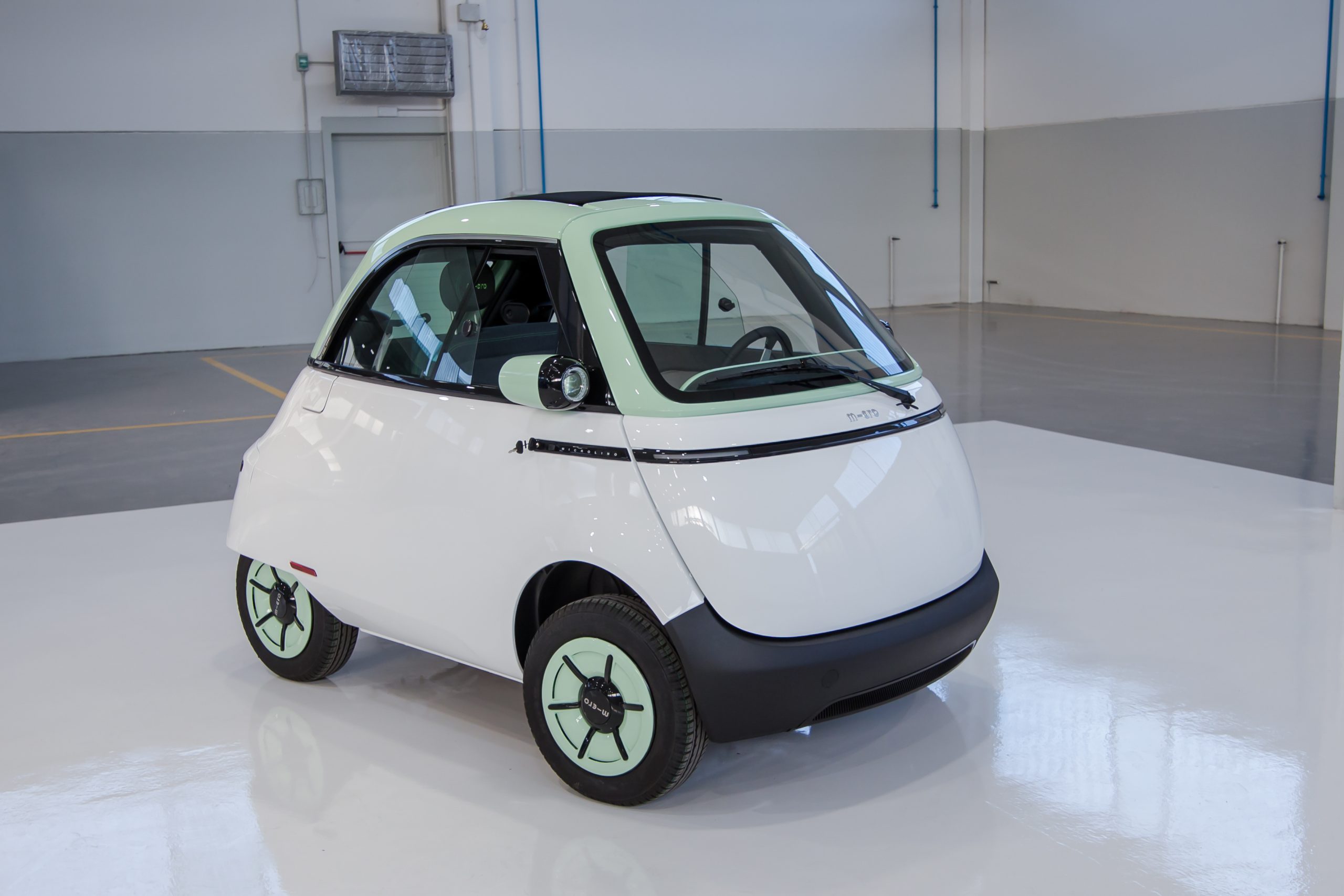 The Microlino Lite falls under Europe’s L6e light quadricycle category. This model has just a few visual changes with a black bumper and small LED lights as opposed to the huge light bar of the regular Microlino. The company doesn’t go into detail, but says that its top speed is just 28 mph. Being in the light quadricycle category means that it can be driven by people without licenses, like teenagers. Pricing for this one hasn’t been announced, but Micro says that when it goes into production next year it’ll be cheaper than its sibling.

Next, let’s check out Micro’s entry into the motorcycle world. The Microletta is an electric moped that follows a similar idea to the car. It sports a classic design that was ironed out into something like a futuristic Vespa. 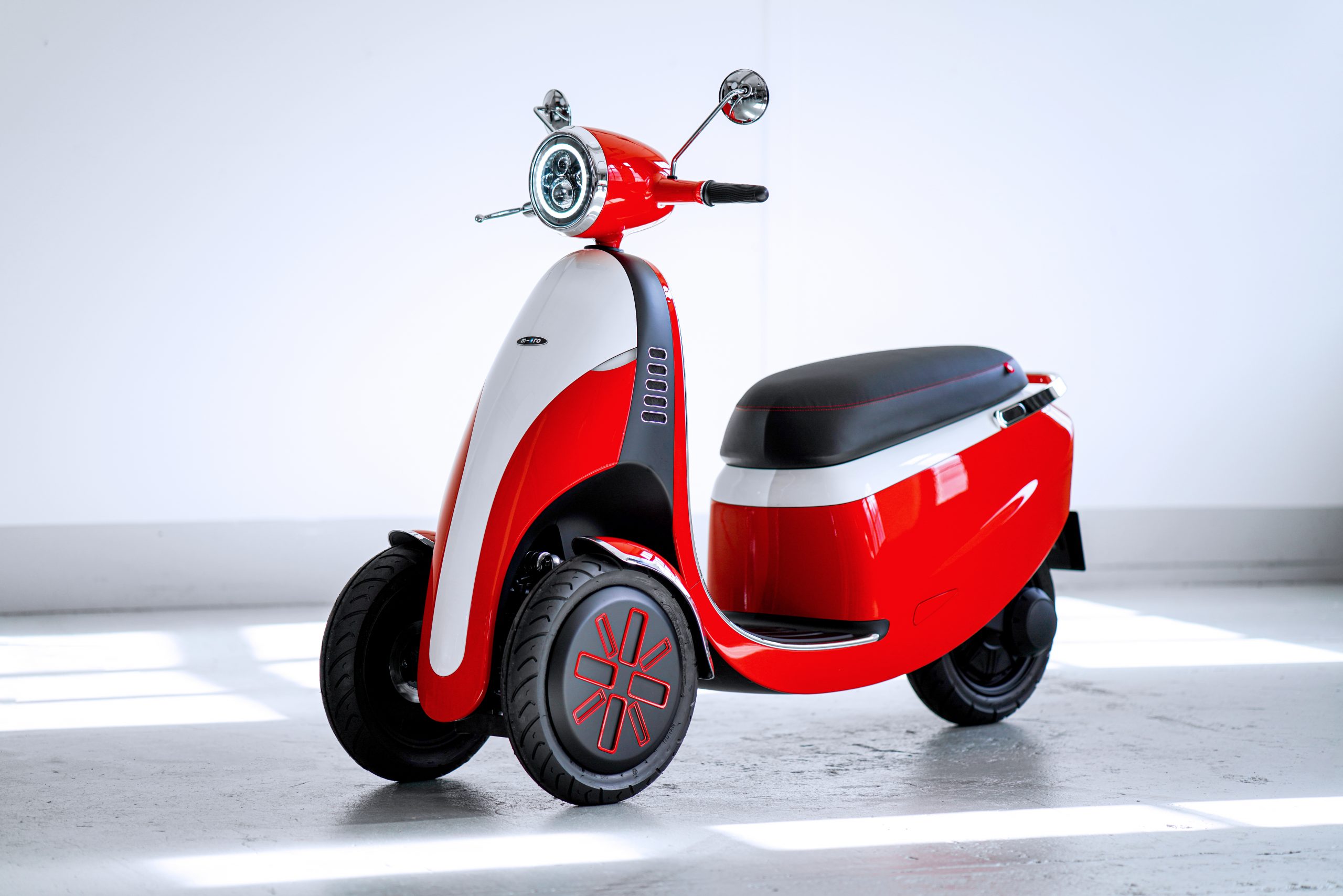 You’ll notice that it has two front wheels, and that was intentional. Making it a trike means that Europeans don’t have to get a motorcycle license to ride it. Micro also says that the dual fronts give it better grip than if it just had a single front wheel. Unlike a Can-Am trike, this leans into turns, so it shouldn’t feel awkward to ride. The front end also has a locking mechanism so that it’ll stay upright when stopped. This means that the rider will never need to put a foot down.

Top speed is close to that of something like a Honda Super Cub at 49 mph. It comes equipped with two swappable batteries that allow it to travel about 62 miles on a charge. The expected price is the equivalent of $4,900, but sadly, no production date has been set at this time.

I saved the best for last, and it’s the Microlino Spiaggina Concept. 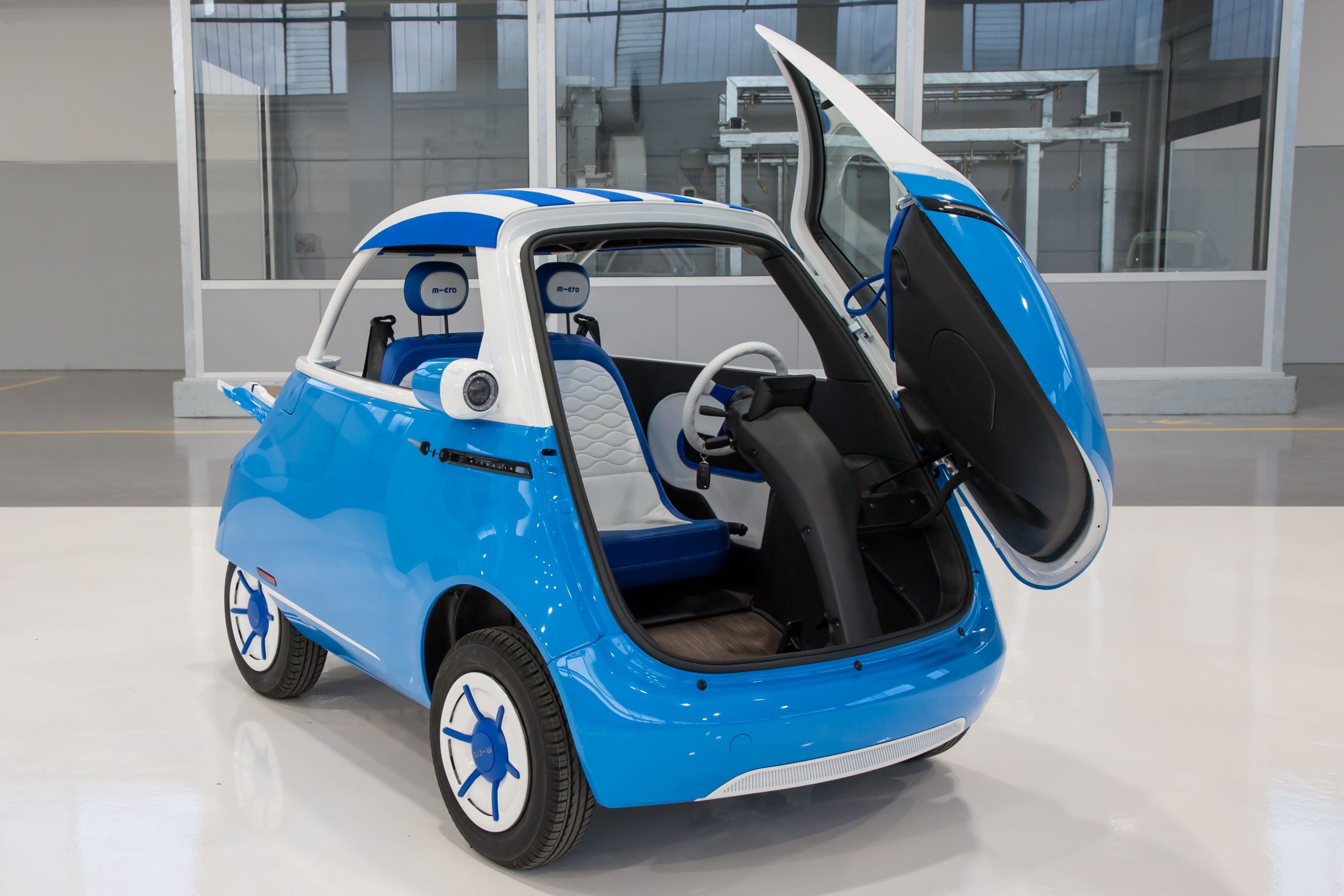 As the name suggests, it’s a beach car, and Micro says that the design was inspired by the Fiat 600 Jolly and the Citroen Mehari. And it’s more than just a Microlino without side and rear window glass.

Micro says that it has a canvas roof, bespoke seats, and even a wooden floor. 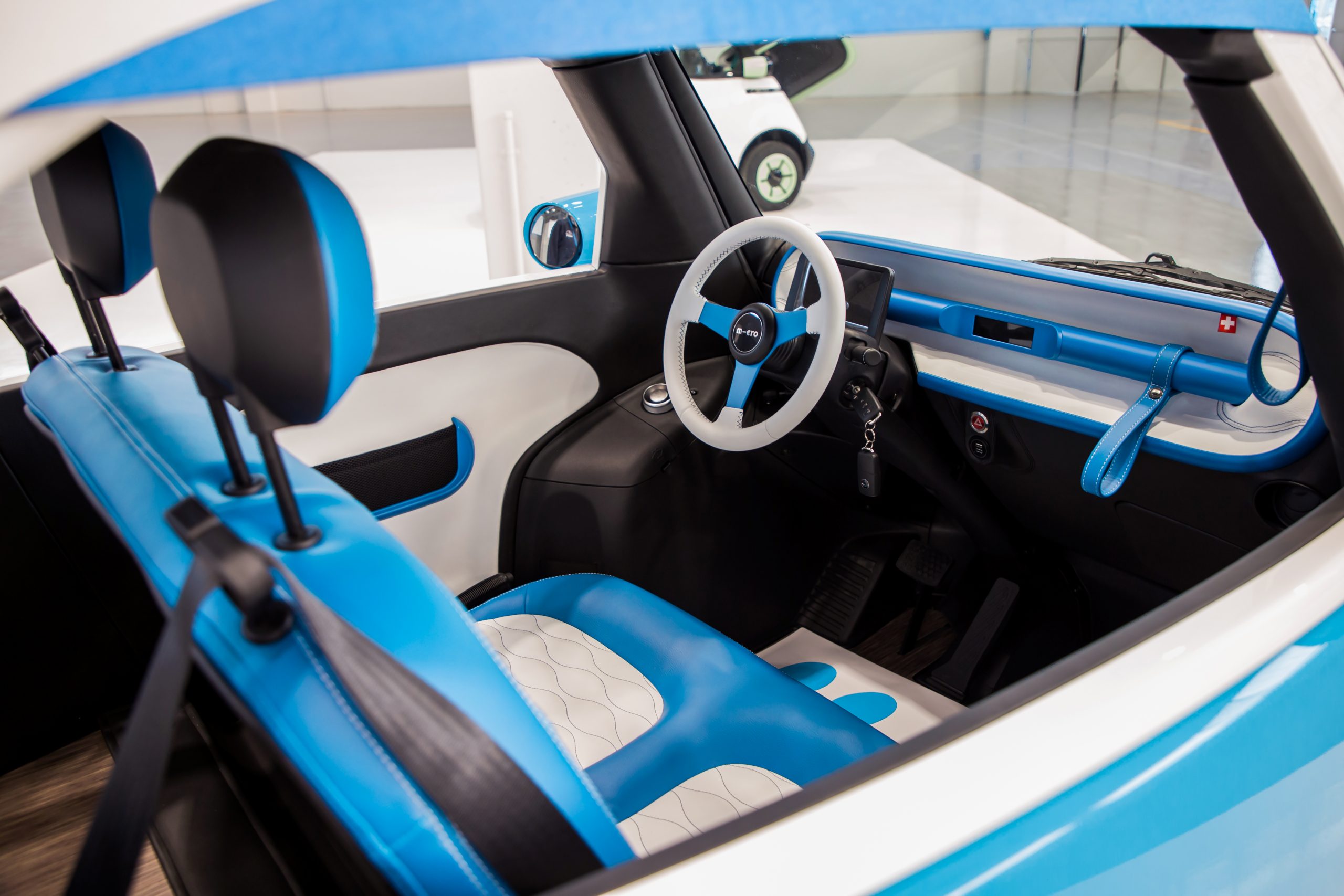 All of this is waterproof, too, so you won’t ruin the car getting caught in a rainstorm. Micro says that this is not just a concept; it will go into production next summer. Apparently, the Micro team has long toyed with the idea of making a beach car, and this is that dream finally realized. 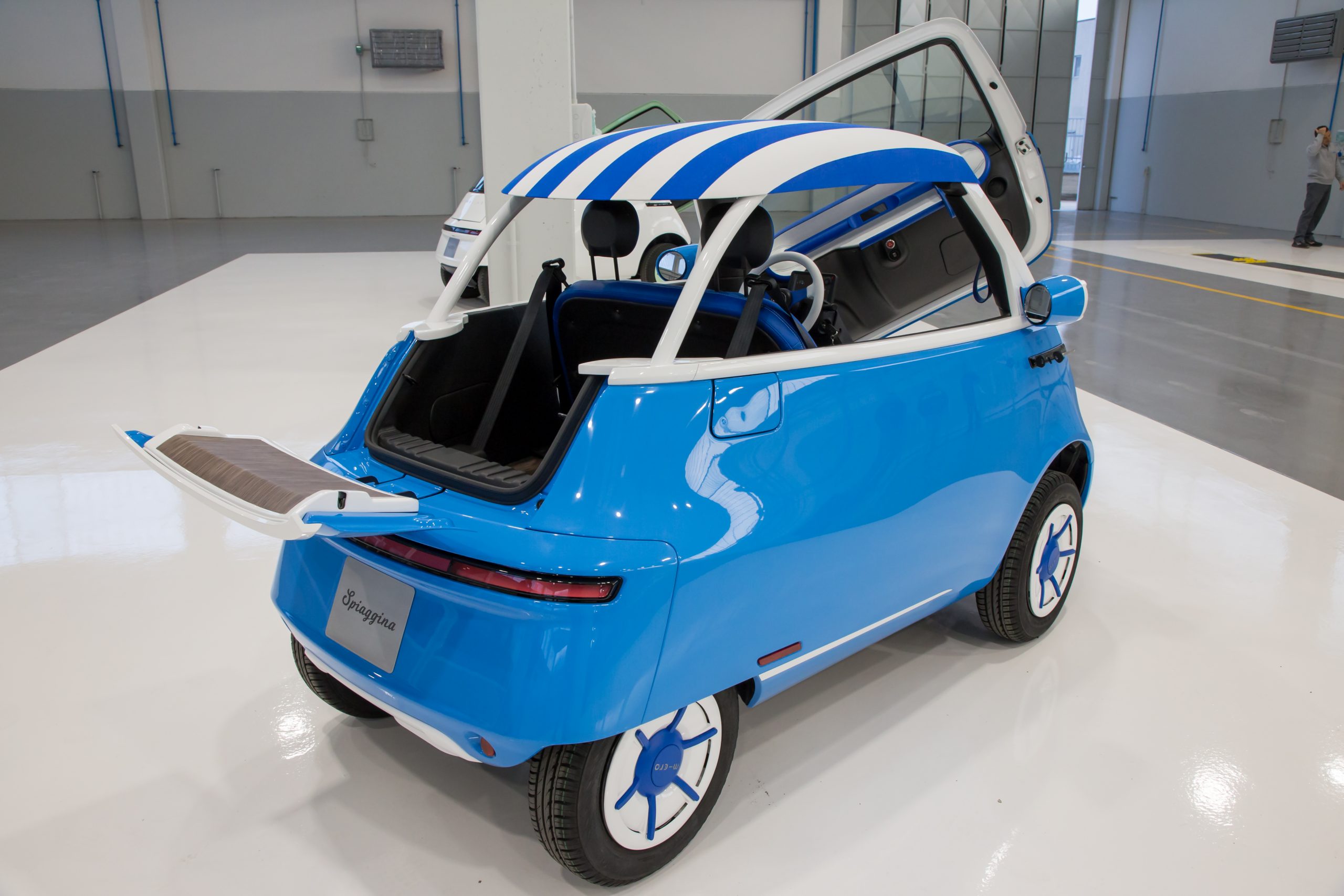 Once again, pricing and other details aren’t revealed at this time. But I do have good news for our U.S. readers! Micro’s site has long said that it plans on coming to the United States, but it’s short on details. I reached out to Micro, and one of the company’s founders, Oliver Ouboter, told me the plan for the States:

So, we do have the intention to come to the U.S. someday, at the moment we are looking for a partner there to make a local production, because we believe it is a vehicle that should be produced locally.

In terms of configuration it should be similar to the one in Europe, but with the difference of having three wheels instead of four, to be able to be in the autocycle category.

Hopefully, Microlino finds that production partner, because these little cars would be awesome to have here!

Mercedes is a lifelong fan of all things powered by an engine. When she isn't driving one of her five Smart Fortwos or her 14 other vehicles she could be found in the cockpit of a Cessna 172 or perhaps swimming in any body of water that she could find. She also has a deep love for buses of all kinds. Please send her buses. mercedes@theautopian.com Instagram: @mistymotors Twitter: @Miss_Mercedes30 Facebook.com/neonspinnazz
Read All My Posts »
PrevPreviousRenault’s CEO Doesn’t Think EVs Will Be As Cheap As Gas-Powered Cars Anytime Soon
NextSomeone Spent Over A Half Million Dollars Making A Modern Interpretation Of The GMC MotorhomeNext