Ever since I saw the reborn Renault 5 EV concept, I wondered if Renault would make a Turbo tribute. Well, my wishes have been granted, because the Renault 5 Turbo 3E concept mates old-school rally-cool looks with a brand new electric architecture while bringing serious performance into the mix.

Let’s start with the powertrain. Renault has essentially taken the Renault 5 concept and widened the rear track by a lot to stuff two electric motors where your shopping would normally go. The zero-to-62 mph (0-100 km/h) dash is dispatched within just 3.5 seconds, seriously impressive stuff for a rear-wheel-drive EV. However, sheer acceleration isn’t the Renault 5 Turbo 3E concept’s main party piece. That would be drifting. 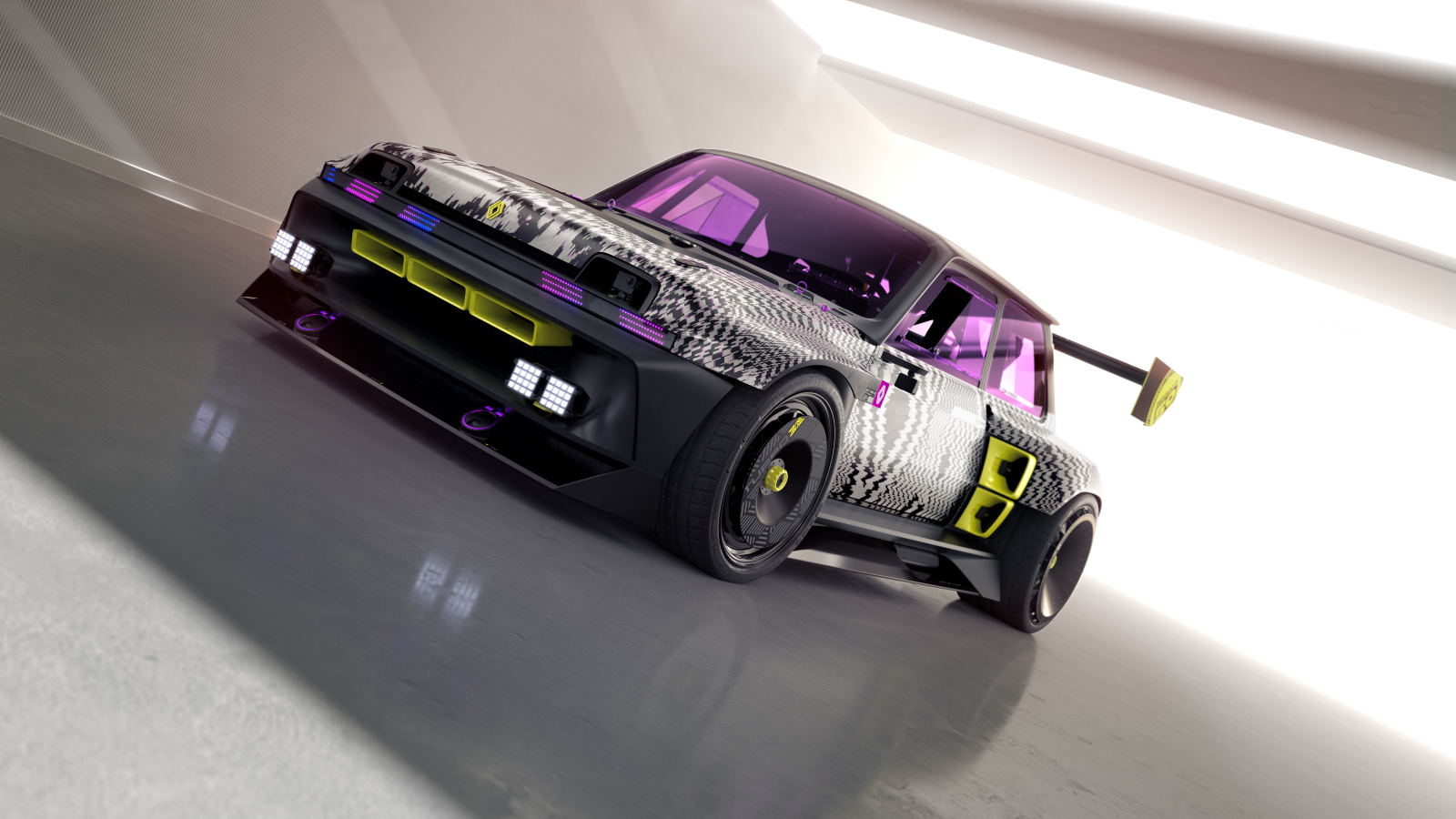 See, Renault thinks drifting is cool and is absolutely right in that assumption. Whether Pluspy or Matt Field’s astonishing Formula Drift Long Beach drone run, I could watch cars slide about all day. Hell, I could slide cars about all day given the chance and facilities without ever getting bored. Since Renault has given each rear wheel on the Renault 5 Turbo 3E concept its own electric motor, current can be sent equally to each rear motor, mimicking a locked differential. Add in a lack of an electric motor up front, and Renault has dialed in a staggering 50-plus degrees of steering angle for throwing backies. Not only does this allow for some sick entries, it also fixes the bus-like turning radius of the last mid-engined Renault hatchback, the Clio V6. Brilliant. 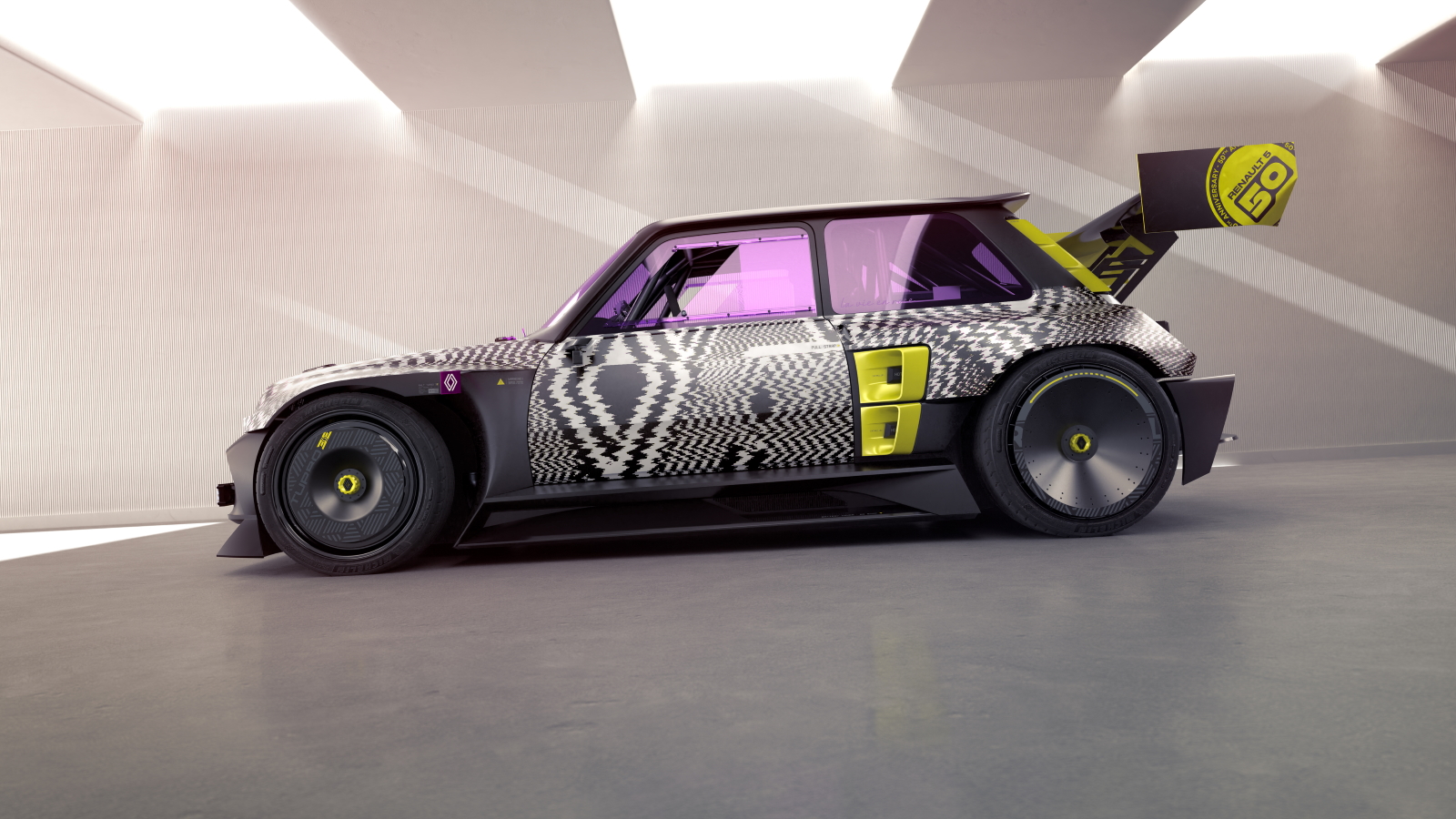 On the outside, the Renault 5 Turbo 3E concept isn’t painted as such, but instead cloaked in an eyeball-spinning digital camouflage pattern that looks a bit like TV static. While definitely a retro-inspired concept, this livery does hide a lot of the car’s surfacing. Thankfully, it’s impossible to hide the boulder-sized box flares that jut out in a properly aggro manner. How else would you shove huge tires underneath a small hatchback? Those tires come wrapped around an amazing set of turbofan wheels that feature incredibly wide lips on the rear pair. Also, can we talk about the purple glazing for a second? I bet it’s awful for visibility but it has an unmistakable vibe, part Omnique and part Kustom. 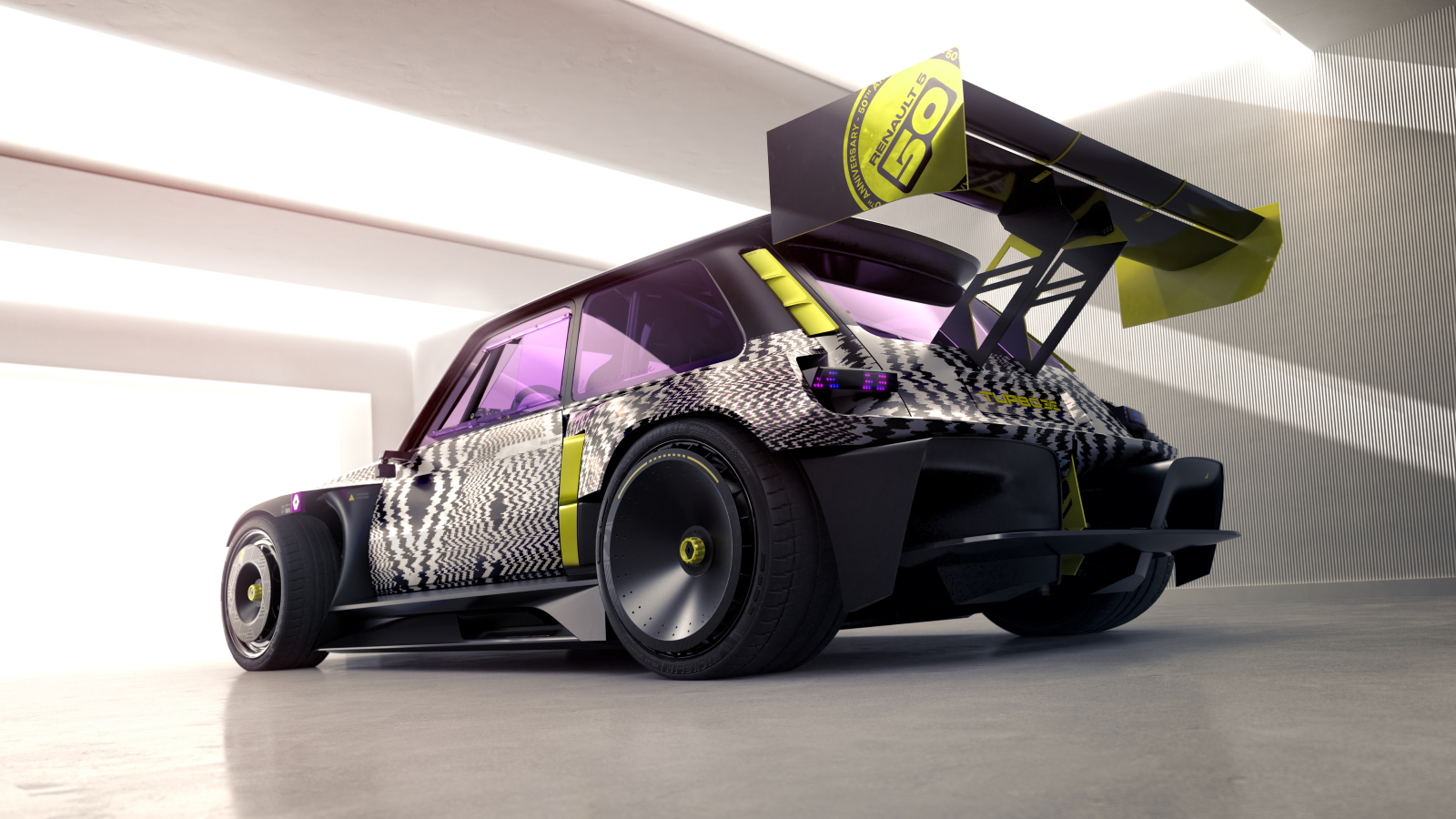 So, Renault’s cooked up an electric drift-spec concept inspired by rally ancestors. Pretty cool, albeit not without controversy. No, I’m not talking about the turbo name on electric cars. Most engine displacement badges are meaningless these days, so what’s the difference? See, electric motors don’t really give you a clutch to kick, so unless you can throw sick feint entries just about everywhere, most electric drift cars will heavily rely on dragging the handbrake to enter a drift.

While not exactly a traditionally-preferred technique, handbrake initiations have found favor in Formula Drift, making electric drift cars best suited to American-style drifting. The Hot Version and Haraguchi fans aren’t going to be happy about that. However, it’s still dope as hell to see an electric car designed to keep both rear tires spinning. I’m glad that automakers are finding ways to have fun within the upcoming regulatory constraints of electric cars, and hot smoky drifts are absolutely fun.

Thomas is a Nu Rave-blaring, heel-toe downshifting, maple syrup-swilling, chassis-geeking, junkyard parts-hauling, floppy-haired scenester who's been writing about cars since college. His current ride is a 2006 BMW 325i with the six-speed manual gearbox. Instagram: @thomas.hundal Twitter: @thomashundal
Read All My Posts »
PrevPreviousThe Story Behind The Mysterious Oldsmobile Toronado Airstream The Internet Is Obsessed With
NextOur Daydreaming Designer Imagines The Ultimate Autopian Tour BusNext