It’s a lovely afternoon at Bland Pines Country Club, and the event organized by Big Three Car Company is in full swing to launch some mid-sized, mid-priced hybrid thing nobody will care about next week. A band plays light jazzy crooner songs in a white tent, while outside the journalists are mingling, drinks in hand. On the lawn an international correspondent is chatting up a fancily-dressed lady journalist. Mid-conversation, they both hear an approaching horn playing the first few notes of Red Barchetta, the nerdiest car guy song ever from the world’s nerdiest band.

“Oh, shit” says Fancy Lady Journalist knowingly, rolling her eyes. “Vat…vat eez dis noise?” asks the international correspondent. Lady sighs, “It’s just some losers that I used to work with.” Suddenly the whole driveway of the club is filled by a white 1981 General Motors RTS city bus covered in lurid graphics of cars and white guys. The bus crawls to a stop and hisses, lowering down to its haunches. 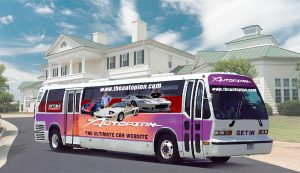 The double doors at the front of the bus swing open, upchucking an entourage led by a bearded, not-particularly-tall middle-aged man wearing a t-shirt emblazoned with a stylized ‘A’ under his (likely borrowed) sportcoat. “Don’t wreck it” he quips to the valet as he tosses him the keys.

What’s up, bitches! The Autopian has arrived.

If there is one thing that the Autopian seems to be lacking, it is a physical presence.  Unless I have missed something, there is no glass building called the Autopian Tower or even an office space between a fertility consultant and an immigration attorney in some professional center in Shaker Heights. While this does not necessarily affect the credibility of this site, the optics of a bunch of people working out of their basement are just not right.  We need to fix this.

Secondly, it would appear that the Autopian is getting out and about a lot lately; car shows, air shows, meet-ups. That’s a lot of airfare and hotel rooms, and if The Ones That Pay The Bills saw the finances they might want to suggest an alternative.

The answer is Autopian Mobile: something to give this website an actual place to call home, and one that isn’t locked into one location. This would be a flagship for the site, and an object to cover with that brand message.

The go-to suggestion as a starting point would have to be the Greatest Of All Time, the 1973-78 GMC Motorhome. Front wheel drive, spacious; the only issue is that they are getting exceedingly expensive, as their greatness is finally not lost on the public. Also, it’s starting to get – dare I say it – a little played out? 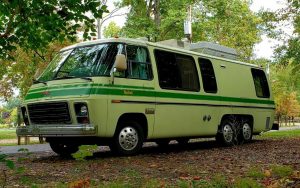 So what to do? Our own Mercedes Streeter might have the perfect basis… an RTS bus. This aerodynamic 1977-2009 masterpiece still looks fresh today, and while she understandably would likely not want to offer up her own bus for Autopian Mobile (uh, would you?), another example could be found. 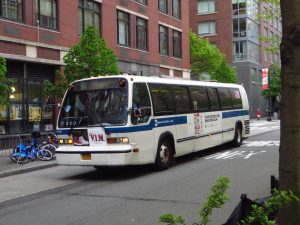 Like the GMC Motorhome, any RTS still existing today would be a timebomb of mechanical issues, but that is actually the point. This is not a typical family camper or a rock band’s tour bus…for the Autopian, a catastrophic failure of a forty year old machine on the road would mean GREAT CONTENT… a million hits just like that. I mean, David standing in the engine bay, Jason hitching rides with questionable locals to get bus parts, Mercedes just shaking her head with disbelief of what these losers have done to her bus…this is how the Autopian Reality Show will be born. Comedy gold.

First, like those annoying HGTV shows, we need to get a list of needs and wants before designing the interior. There has to be space to eat, sleep, and more importantly do the work of keeping the hot content coming to the World’s Most Dangerous Car Enthusiast Website. Mercedes has even requested motorcycle storage/transportation space, so we’ll see if we can pop that in as well.

The front compartment would be a multipurpose area of sorts. There’s a ‘dinette’ that would also be used a conference or meeting table for the team to strategize the event or the stories of the day (if they actually did that). The table sits between two rows of facing seats; I was trying to think of the most comfortable bench seats imaginable that also had that mid-1970s modern look to them, and that answer was simple: Volvo 240 seats.  We can do a ‘prove me wrong’ on this but these are easily the most comfortable car seats ever made; you’re not gonna change my mind. The grid headrests just look so RIGHT with the RTS aesthetic. [Editor’s Note: There’s other good reasons, too. – JT]

To illuminate the worksurface, the answer is also pretty obvious- a chandelier made out of box taillights, right?  I mean, you’d have Beetle taillights above it and British Leyland side marker light lenses hanging down like jewels below. It’s so beautiful. Don’t worry; we’d secure it so it couldn’t swing and hit somebody. 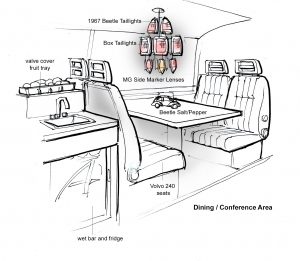 Note that there is a wet bar and storage in front of the dinette, the primary reason being something that is plainly visible under the dog in the pic of Mercedes’s RTS bus- the wheel wells. You need to work around those creatively. 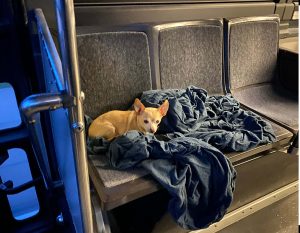 The opposite side of the aisle would be where the magic happens…two workstations for getting the stories out. The desktops are supported by Autopian logo-shaped floor to ceiling ‘ribs’, and Volvo seats to match the benches of the dinette would be on sliding swivels bolted to the floor. Here we need to give a tribute to David and Beau with four 1965-66 Mustang taillights arranged in a ‘cube’ surrounding a bulb to create hanging pendant lights. A flip down flat screen above is for conferences at the dinette, and a printer/scanner stand over the wheel well to create fake credentials with ease. 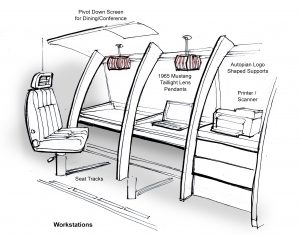 Further back is the kitchen area and bath on one side, and bunks on the other. Sliding curtains maintain privacy; I considered engraving the initials of the founders on the walls next to the bunks like Bert and Ernie’s beds in Sesame Street but though better of it.

Outside, vinyl graphics would be ideal advertising but also be removable to not hurt the value of this piece of history. A fold out awning on one side could be added to create a shaded destination space to meet and greet crazed fans (“oh my God…I just touched Torch….my psoriasis is gone!!”) or more likely to work on the latest Lemons race car.

Think of it- a way to get the Autopian name out there and stay productive on the road. You’re not gonna see The Drive staff with one of these, boy. Of course, the whole Autopian staff won’t fit in this thing, which is fine because the real auto designers are frankly too cool to be seen in a Carter-era public transporation device billboard. Those guys will follow in motor coaches designed by the guy that penned the split window Corvette and the first Grand Cherokee, painted in a shade of Bella Ligos’s Dead Black chosen by one them: 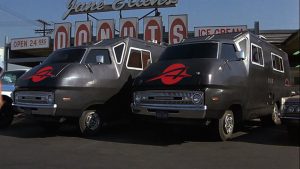 This vehicle would take on a life of its own; cartoon drawings of this ‘mascot’ vehicle by Jason would be all over the site. A paper cutout could be available in the latest vinyl wrap, so that any Autopian fan could waste time building their own ’81 RTS to put on a desk or hang from the rear view mirror to show solidarity. 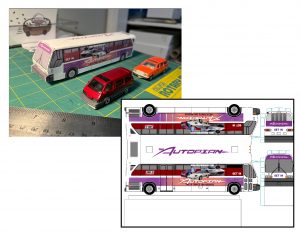 Despite the practical advantages of Autoipian Mobile, something tells me that this whole thing is a bad idea. A few sleep deprived lunatics at the wheel of 30,000 pounds of forty-year-old vehicle.

God help us all.