There’s been a lot of reports recently that suggest that the Department of Justice has been conducting a criminal investigation into Tesla’s claims regarding their Level 2 semi-automated driver assist system known as Autopilot. First reported by Reuters, the probe was started last year in the wake of over a dozen crashes that appear to have involved Tesla’s Autopilot system in some manner. While Reuters’ source was thin on details of the alleged probe, the existence of such a probe is a very big deal, and while Tesla is the focus here – I think for valid reasons – the underlying problems being investigated by the probe are, to some degree, inherent in Level 2 semi-automated tech.

The crux of the Department of Justice’s probe seems to be related to the disparity between how Autopilot is marketed and promoted and the actual realities of what the system is capable of. This imbalance is at the heart of pretty much all Level 2 systems, as a study from the Insurance Institute for Highway Safety revealed earlier this month. People who use Level 2 semi-automated driving systems – which require an alert driver to be ready to take control back with no warning – seem to think their systems are much more capable than they are, which can lead to serious safety issues.

I think Tesla has definitely implied that Autopilot is more capable than a Level 2 system that is very much not a true self-driving system. This starts with the confusing name Autopilot, something that to most people suggests self-driving, and the company has definitely done more than just suggest the Autopilot system is self-driving, in one prominent and longstanding example, they’ve come out and said it.

That example is in a video from 2016 that is still on Tesla’s website, in a post titled “Full Self-Driving Hardware on All Teslas.” This video, set to the Rolling Stones’ Paint It Black, begins with this text: 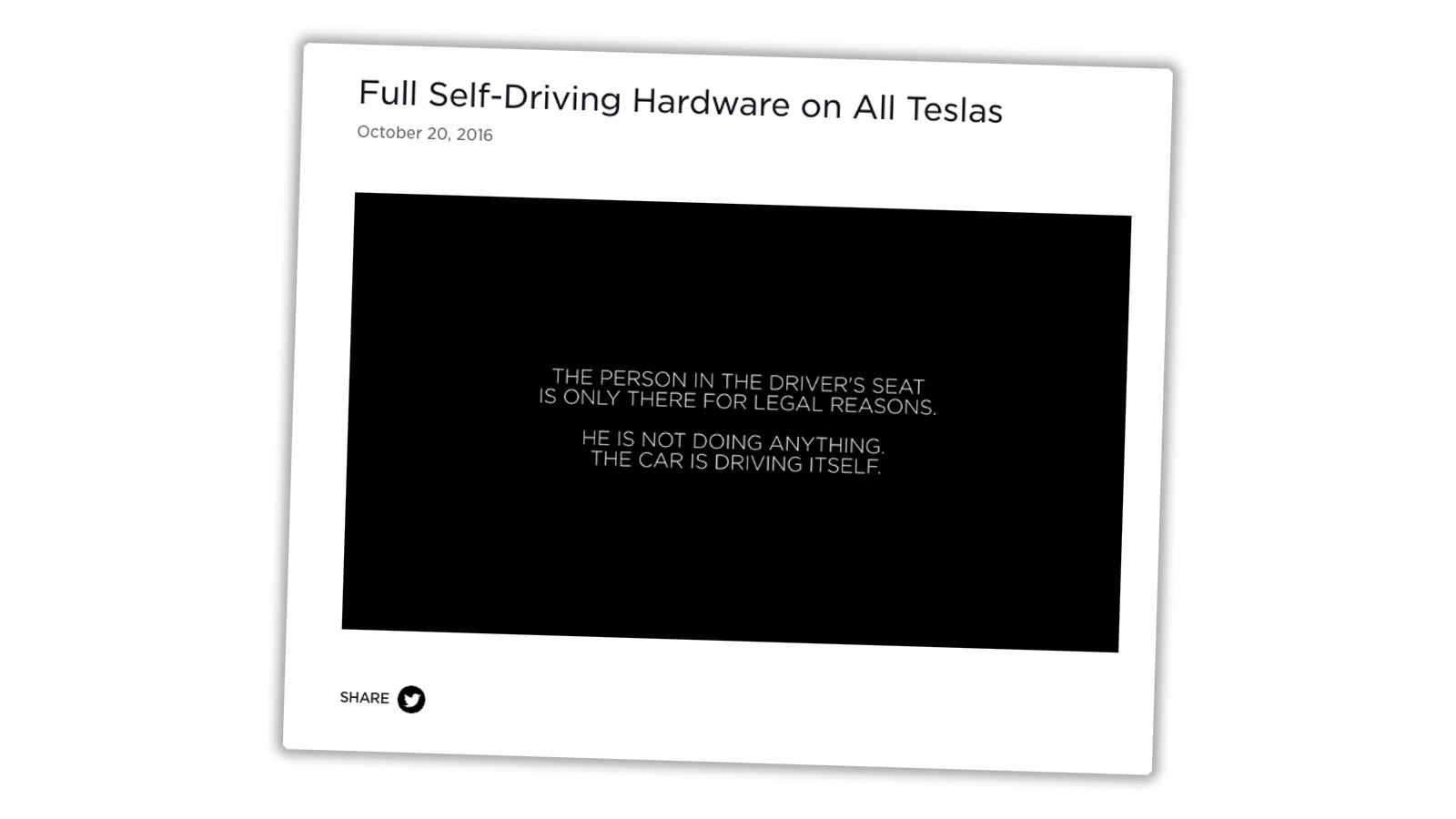 I mean, this feels pretty damning to me: “THE PERSON IN THE DRIVER’S SEAT IS ONLY THERE FOR LEGAL REASONS. HE IS NOT DOING ANYTHING. THE CAR IS DRIVING ITSELF.” How is that not suggesting that Autopilot is capable of driving the car on its own? As an extra bit of irony, last year the New York Times found that during shooting of this video, the car hit a roadside barrier and required repairs. I bet you won’t be shocked to find that part didn’t make it into the final video.

Of course, nothing is simple. Tesla has definitely provided all of the necessary warnings and disclaimers needed for Autopilot on their website and in their owners’ manuals, and those are quite clear as well: 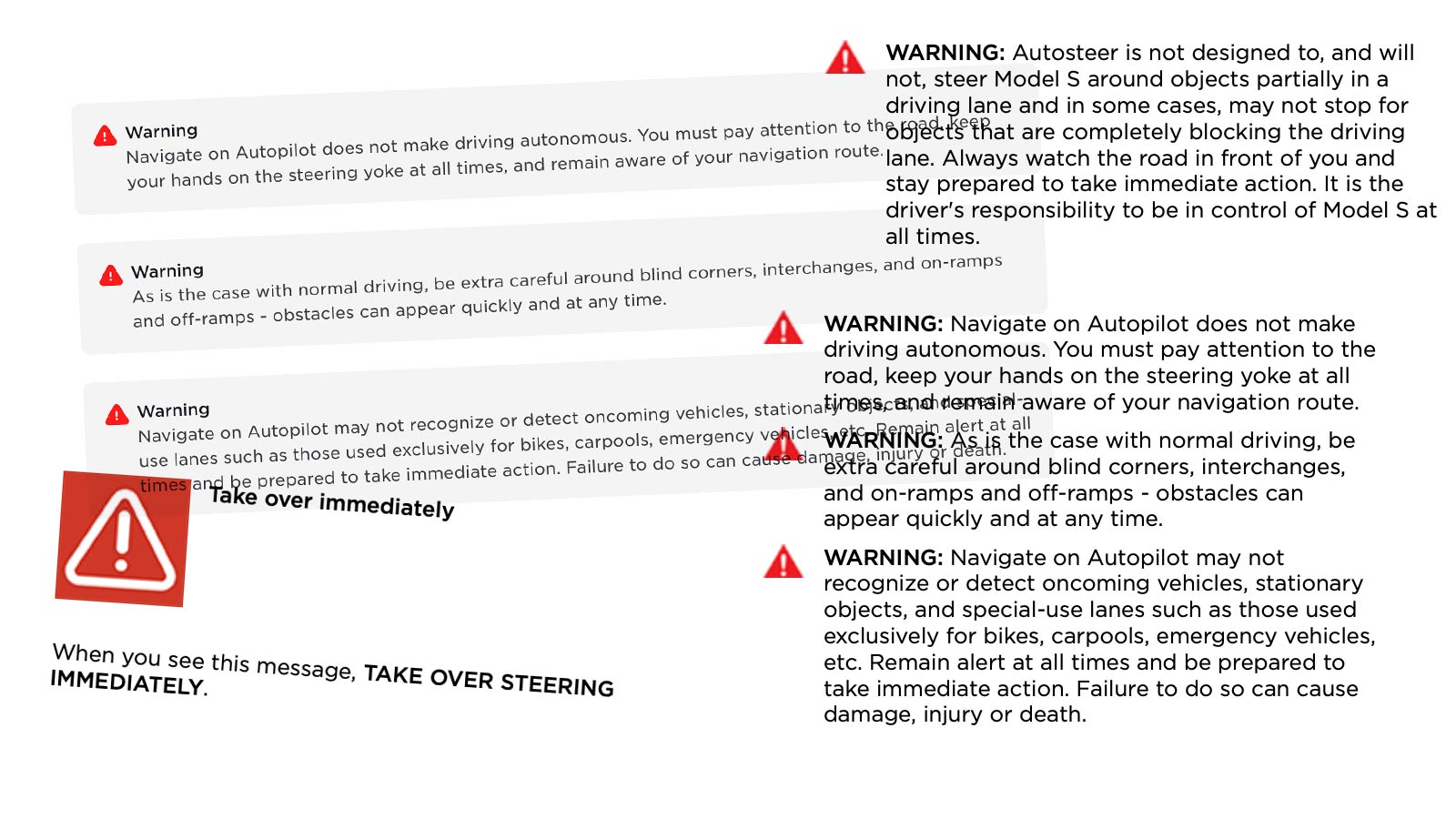 It comes right out and says Autopilot “does not make driving autonomous,” and “remain alert at all times and be prepared to take immediate action.” There’s no disputing that. Tesla definitely is covering their ass here, and I’m not certain how the DOJ plans to incorporate this into their investigation, and Reuter’s sources didn’t have specific commentary about this, either.

These statements and warnings, though, are in smaller print on websites and deep inside owner’s manuals. This sort of honest, forthright assessment of Autopilot’s limitations are not what’s normally seen in public statements, which are things like

Essentially, passive Autopilot (car intervenes only when crash probability is high) cuts crashes in half.

Active Autopilot (car is driving itself) cuts crashes in half again.

Doesn’t mean there are no crashes, but, on balance, Autopilot is unequivocally safer.

…in that one he actually says “car is driving itself” when using “Active Autopilot” and when Tesla got pushback when they called their more advanced, in-development (yet deployed on public roads) semi-automated driving assist system “Full Self-Driving (FSD),” Elon Musk responded like this:

While I can’t speak to exactly what the DOJ is investigating, what I can see are two very different kinds of messaging happening about Autopilot: the grim realism of the warnings on websites and in documentation that makes it very clear that the car is not self-driving, and the driver must be ready to take control at any moment, and the more marketing-type messaging that suggests that Autopilot-assisted driving is so much safer than human driving, and that were it not for all those pesky, fussy, fun-killing government regulators, you could be blasting down the highway at 90 mph watching VR porn on a headset.

So, the real problem seems to be a clash between actual capability and how Tesla is presenting Autopilot to the world, and while I can’t speak to what the DOJ will decide, I can note that all Level 2 systems are somewhat inherently going to be plagued by this, and the more advanced an L2 system gets, the worse the problem becomes.

The issue is that all L2 systems require non-stop attention from a driver, because a disengagement could happen for any number of reasons, without any real warning, and the driver is needed to take control immediately. This is literally part of the definition of what a Level 2 system is: 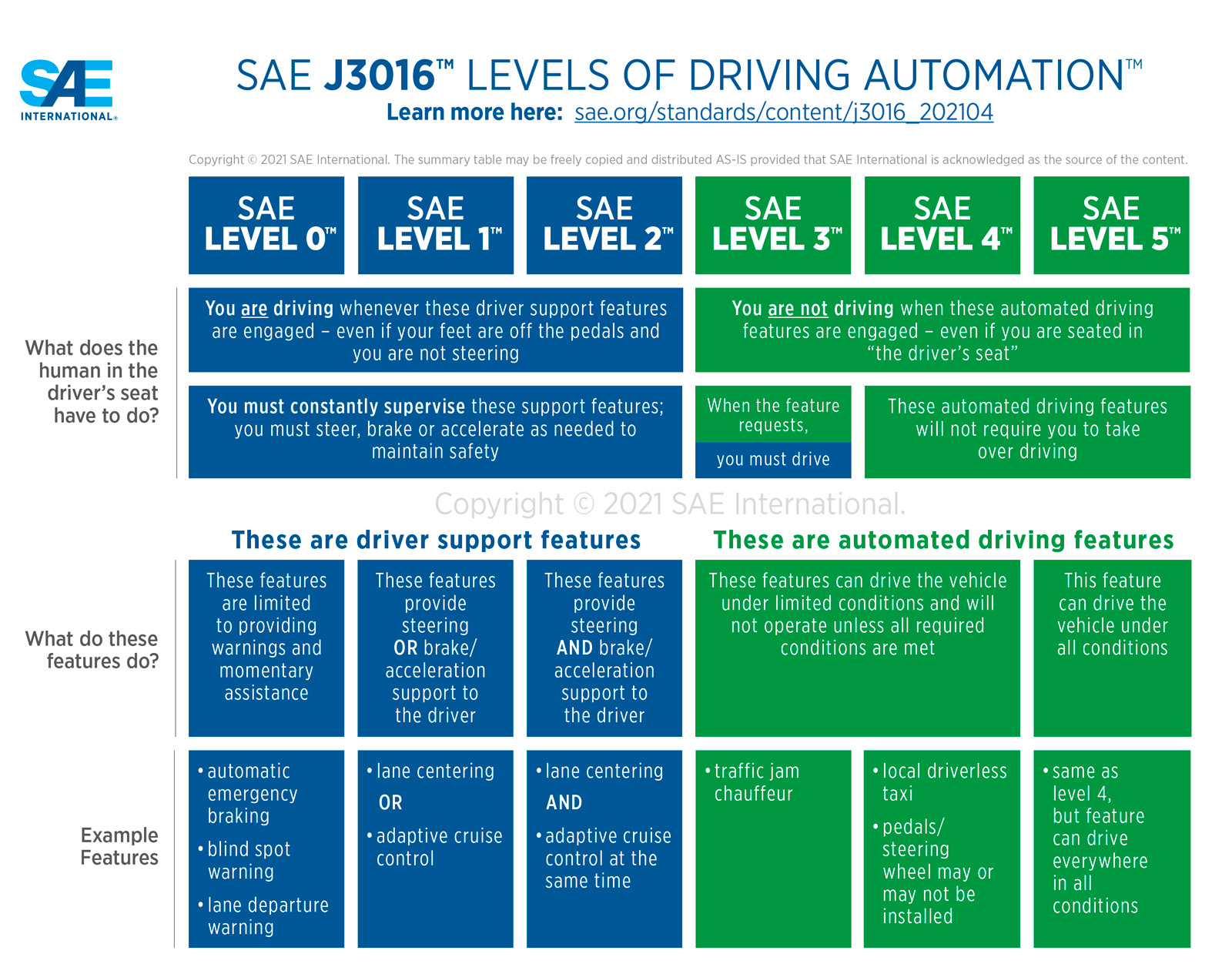 See where it says “You are driving whenever these driver support systems are engaged,” and “You must constantly supervise these support features?” That’s pretty clear about what’s going on. The problem is that highly developed L2 systems can seem like they’re driving themselves, performing the vast majority of the driving task, yet they’re still just L2 systems, and could require takeover at any moment.

That’s how we get mainstream articles like this New York Times article from earlier this year, where a writer driving a car with GM’s Super Cruise L2 system dangerously mischaracterizes the system as being much more capable than it really is, and stating that what was required of him as a driver was

All the car asks is that you keep looking forward, in the general direction of the road.

…which is, of course, absolutely untrue. That’s not all the car is asking. It’s asking you to be ready to drive, at any moment.

This is a huge problem because the more an L2 system does, the less it seems like the driver needs to do anything, so the less attentive they can allow themselves to be.

Yes, the DOJ is going after Tesla now, again, I think with good reason, but it may be time to evaluate how every automaker approaches Level 2 semi-automation, and decide if it makes any sense at all.

I'm a co-founder of the Autopian, the site you're on RIGHT NOW! I'm here to talk to you about taillights until you cry and beg me to stop, which I absolutely will not. Sorry. Hug? Also, David's friend.
Read All My Posts »
PrevPreviousWho Would Buy A Posh Avenir Version Of The Buick Encore GX?
NextProve Our Designer Wrong: Cars Should Only Ever Use Wheels From Their Own OEMNext