There is a strong prejudice against the 10th-generation Ford F-150 sold from 1997 to 2004 in the Unites States, based primarily on its softer and more rounded looks. This is utter nonsense. The late ’90s Ford F-150 is a fantastic design and one of the most attractive trucks ever made.

(This is another in our Prove Me Wrong series wherein we tell you the obvious truth and you, for some reason, deign to disagree.)

The internet is built for takes and this may sound like the ultimate take if you’re a BIG TOUGH FERD TRUCK guy, but I sincerely believe it. In fact, up until this morning, I wasn’t even aware there was a disgusting prejudice against the 10th-gen F-150. I was talking about how much I loved the design with David Tracy and he said, in his words: “That’s the worst F-150.”

I was shocked. David is a supreme weirdo so maybe this is just a strange David thing, I thought. Alas, here’s a thread on a Texas Aggie forum that starts with someone complaining about this generation of truck. As a Longhorn I’m legally required to point out that basic things like indoor plumbing and foods you eat with a utensil other than your unwashed hands are beyond an Aggie’s general comprehension (sorry sis). What Aggies do understand is trucks, which they call “loud mules.” What’s going on here?

The F-150 of this era is actually great and it has a unique aesthetic that I believe has aged quite well. It also has way more in common with the OG Ford F-Series than any new truck.

Let’s start with the basic, Lariat, SuperCab F-150 like the one pictured up top. Styled by Ford’s design chief Andy Jacobson as his swan song, the design does a great job at including the rounded fenders and friendly visage of the original Ford F-1s that are generally considered the first generation of the F-Series. Those trucks were not an aggressive amalgam of shiny bits and hard angles that we’re used to today. The trucks look tough but also approachable and happy.

The proportions on this single-cab XLT are also wonderful. It’s still a truck and you’ve got a short frontal end and hood that bleeds nicely into a large, open canopy. You can see the world in this F-150 and the world can see you. If you’re going to run over a postal employee on his route in one of these things it’s not gonna be by accident.

And let’s just go ahead and cheat and go straight to the F-150 Lightning with its short cab, short bed, and delightful flareside. Even the rear of these things, with their Mustang-alluding taillights, just ooze charm.

If people do not like these it is because:

[Editor’s Note: How does the first option even make sense? Isn’t that a truism? Anyway…-DT].

I’m not going to go on a rant about how modern trucks are too big and all that horseshit because we demand a lot of trucks and some of that size is just a reaction to the capabilities people desire. I will, however, rant about how modern trucks have been designed to look like the Batman evil villain Bane if Bane were making out with someone and got a surprise finger-up-the-bum and can’t decide whether or not he likes it. [Editor’s Note: Things are getting weird. -DT]

Some modern trucks, and especially the newer F-150s, were inspired by Tonka Trucks. There’s nothing wrong with that, per se, but a good truck should look strong while also looking like it’s a part of the family. Think of a German Shepard. A German Shepard can look strong and even fearsome while also maintaining a gentleness that makes you want to cuddle up to one. A good truck should do that!

If you think this:

Looks better than this:

I’m not the one who needs to get their eyes/priorities checked. And the trucks sold, too! In 1996 and 1997, Ford managed to sell 780,838 and 746,111 F-series, respectively. Because Ford is weird about breaking out sales numbers between different F-Series models it’s hard to say exactly that this was the most successful generation F-150 from a sales perspective, but if it isn’t it’s pretty damn close.

So, there you go. These look great. You can tell me I’m wrong below but what you’re really telling me is you have bad taste and ya basic.

Look at those two photos above. One’s a beautiful portrait of a nice green truck in a field, with horses in the background. The other one is a boring black color with no background and no charming animals. Clearly Matt’s stacking the deck against the newer F-150.

But let’s just move beyond that. My main qualm with the 10th-gen F-150 is: that it was so much uglier than its contemporaries. Just look at what Ram had in 1997:

Lord have mercy, if that ain’t a beautiful machine! That’s the second-gen Dodge Ram 1500, which was around from 1994 to 2002, and which in many ways revolutionized pickup truck design. It really ushered in the era of “tough” looking trucks with “big-rig”-like styling, and whether you like “tough” trucks or not, I bet you’ll agree that the second-gen Ram did it right. Oldmotors.net has a phenomenal writeup titled: “1994: The Ram Revolution.” Here are some quotes from it describing just how big of a deal this design was in the truck game:

The “miniature big rig” shape of Ram pickups is familiar today, but in 1993 it was genuinely radical. At that year’s Detroit Auto Show, Dodge’s first totally new big pickup in 21 years dropped slowly to the stage from the rafters of Cobo Hall. It landed in the public consciousness like a thunderclap.

Despite a recurrence of financial woes after the AMC acquisition, that event brought a constellation of talents – Bob Lutz, Francois Castiang, Tom Gale, and many more – together just as Chrysler switched to modern “platform team” setups for design.

Like the Dodge Viper and ZJ Jeep Grand Cherokee before it, this wildly different truck was one more symbol of Chrysler’s early-90s renaissance, a time which some ex-staffers call “The Camelot years” (roughly 1988-1995).

A full-size truck was something fairly new for him and his team – nobody at AMC or Jeep had designed a full-size pickup in decades. Veterans of the 1972 D-series/Ram program were also mostly gone – it had been 20 years.

The truck was famously inspired by Kenworths and the WW2-era power wagon, but also the mid-1950s Studebaker E-series/Transtar. It had bold fenders that suggested the separate fender look and big grilles of highway trucking, and it was big and bold in every respect.

Though the visual action was most obvious on the outside, the inside of the truck cab was also totally re-thought. Loads of storage spaces were added inside to a larger, more ergonomic overall setup .

This beautiful Dodge Ram had been out for three whole model years by the time the new F-150 showed its hideous, round face, and that’s all Ford could come up with?

Not to mention, look at the relatively beautiful GMT-400 truck Chevy was selling in 1997:

The F-150 is the least pretty of the three; even when Chevy rounded its truck a bit for 1999, the new Silverado still kept its edge over the 10th-gen F-150 in terms of styling:

Not only was the 10th-gen F-150 the most hideous of the Big Three offerings at the time, but it was also much uglier than its now-nicely-aged successor. Look at how “clean” the 11th-gen design looks: 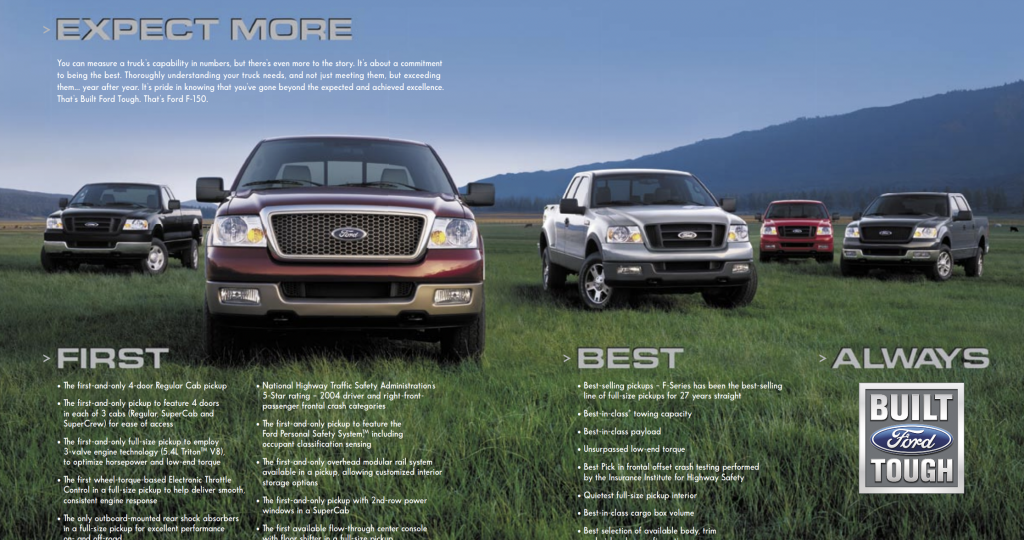 I will admit that I don’t actually hate the 10th-gen F-150. It’s kinda grown on me, to be honest. This work truck with the steelies? I kinda dig it?:

But I’d never say it’s the best F-150 ever. Not even close. I mean, Matt, are you seriously gonna sit there and tell me the round-nose “Triton Generation” F-150 is prettier than its predecessor, the “Aeronose”? 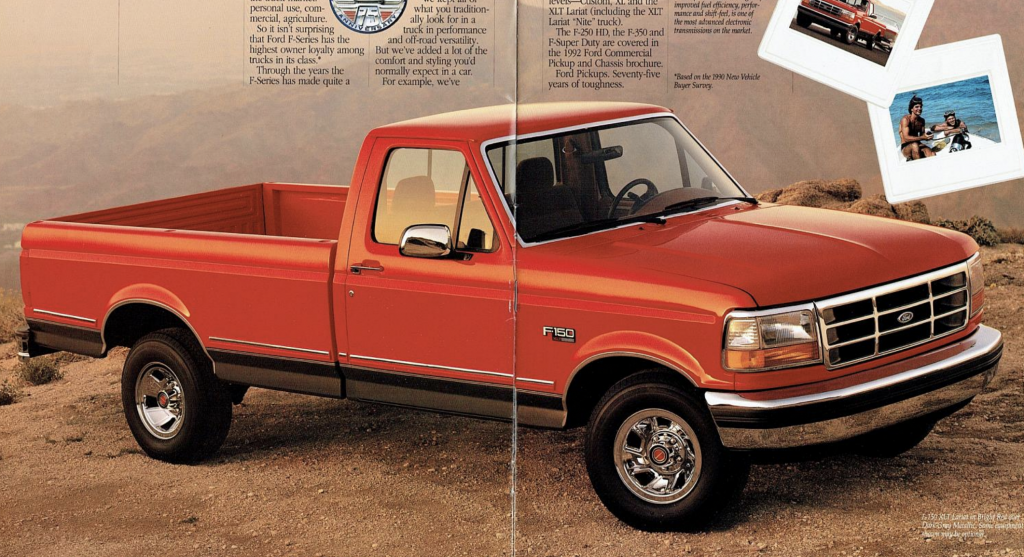 Though maybe Matt’s right, since he’s from Texas and thus has authority on all truck-related matters. Tell us your thoughts in the comments.

Howdy! I'm the Publisher of The Autopian which means I'm to blame for at least a small part of this. I used to run another car site and then made movies and TV shows. Now I'm here to convince you to buy a Peugeot.
Read All My Posts »
PrevPreviousHere’s What Lamborghini Did To The Huracan Supercar To Turn It Into An ‘Off-Roader’ Called The Lamborghini Huracan Sterrato
NextWhy The Dirt-Cheap Broken Jaguar X-Type For Sale In Every Town Might Actually Be Worth Buying And FixingNext