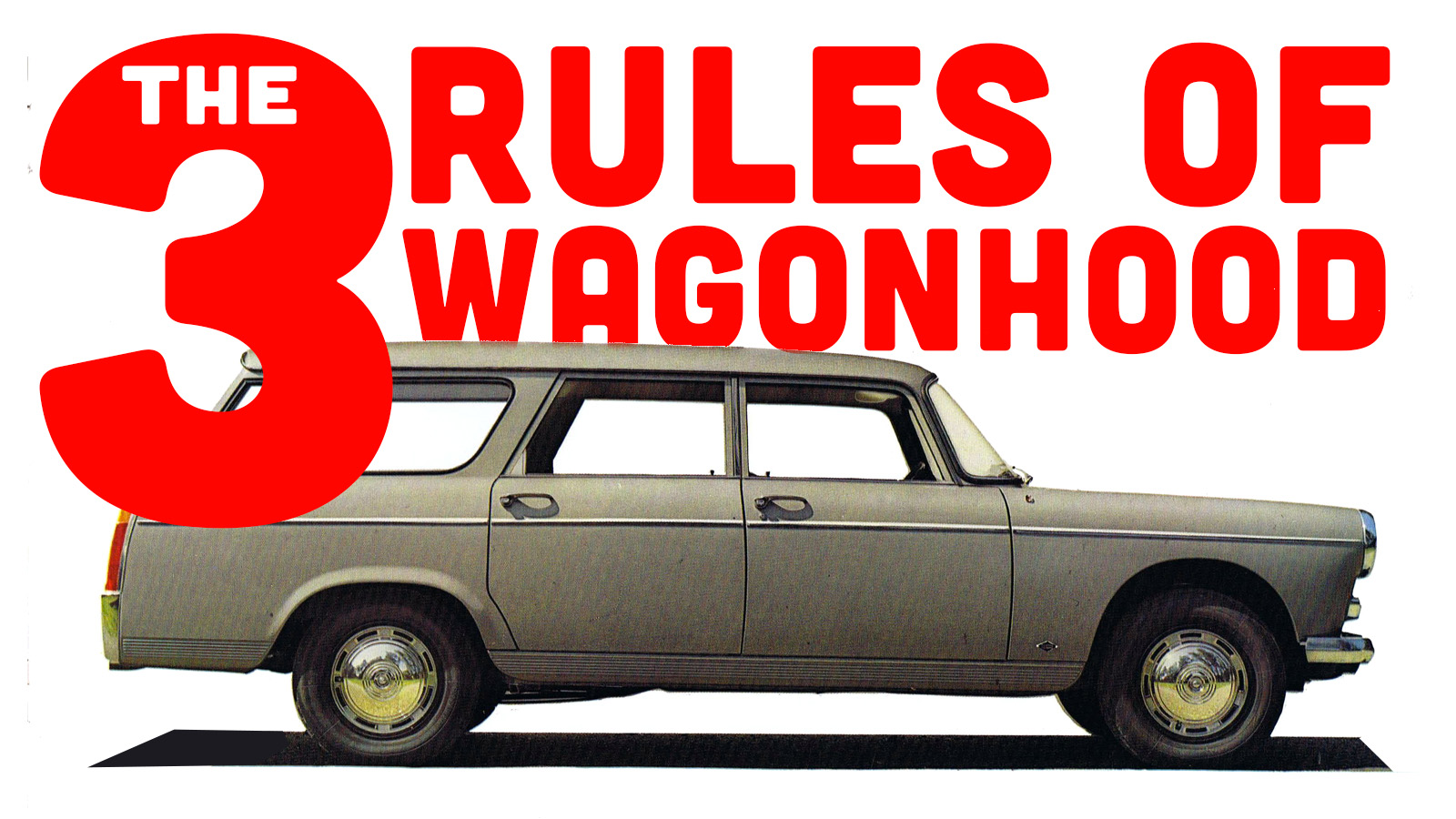 Many, many years ago, soon after I started my career as a Professional Automotive Dipshit, I performed a colossal service to humankind: I codified the rules for what defined a station wagon. This was, to my absolute horror, a solid decade ago, and I’m realizing now that these rules need to be restated, and, I think, expanded, just a bit. The basic rules still stand; however, in our era of crossovers and SUVs, I’m realizing that the Wagon Rules need to formally accommodate them, otherwise we’re all in grave danger of tearing ourselves apart. So, let’s get some order back into the universe.

This need was alerted to me via Twitter, when I was tagged in a post discussing a recent Jalopnik article about all the wagons currently for sale in the 2023 model year:

@RSorokanich should go into the @Jalopnik archives and read the Master Thesis @JasonTorchinsky wrote about this.

The subsequent thread of twitter-fighting about what is or isn’t a wagon was my wake up call that my people need me, and that this madness must be stopped. We all need to agree on just what makes a wagon, which is why I implore you to pay attention. 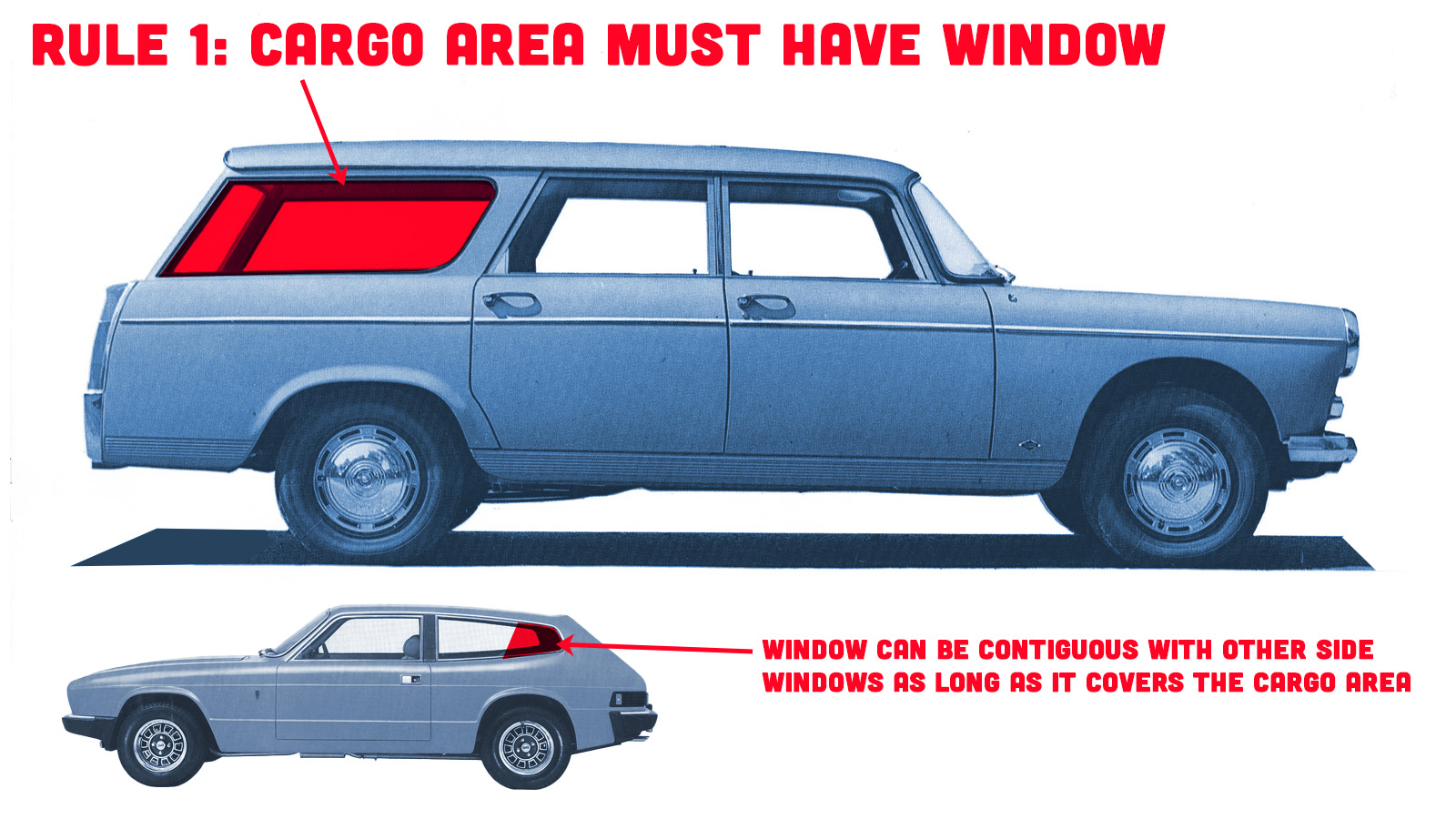 Rule 1 states that the cargo area of a wagon must be provided with side windows. The size or shape of such windows isn’t important, and the glass area of the window can be contiguous with a longer side window that extends from the rear passenger seat, if one is provided.

It should be noted here that the number of doors does not matter: two, four, or even three doors are fine. You can have two door wagons, and, of course, there’s the sporty two-door wagon variant known as the Shooting Brake: 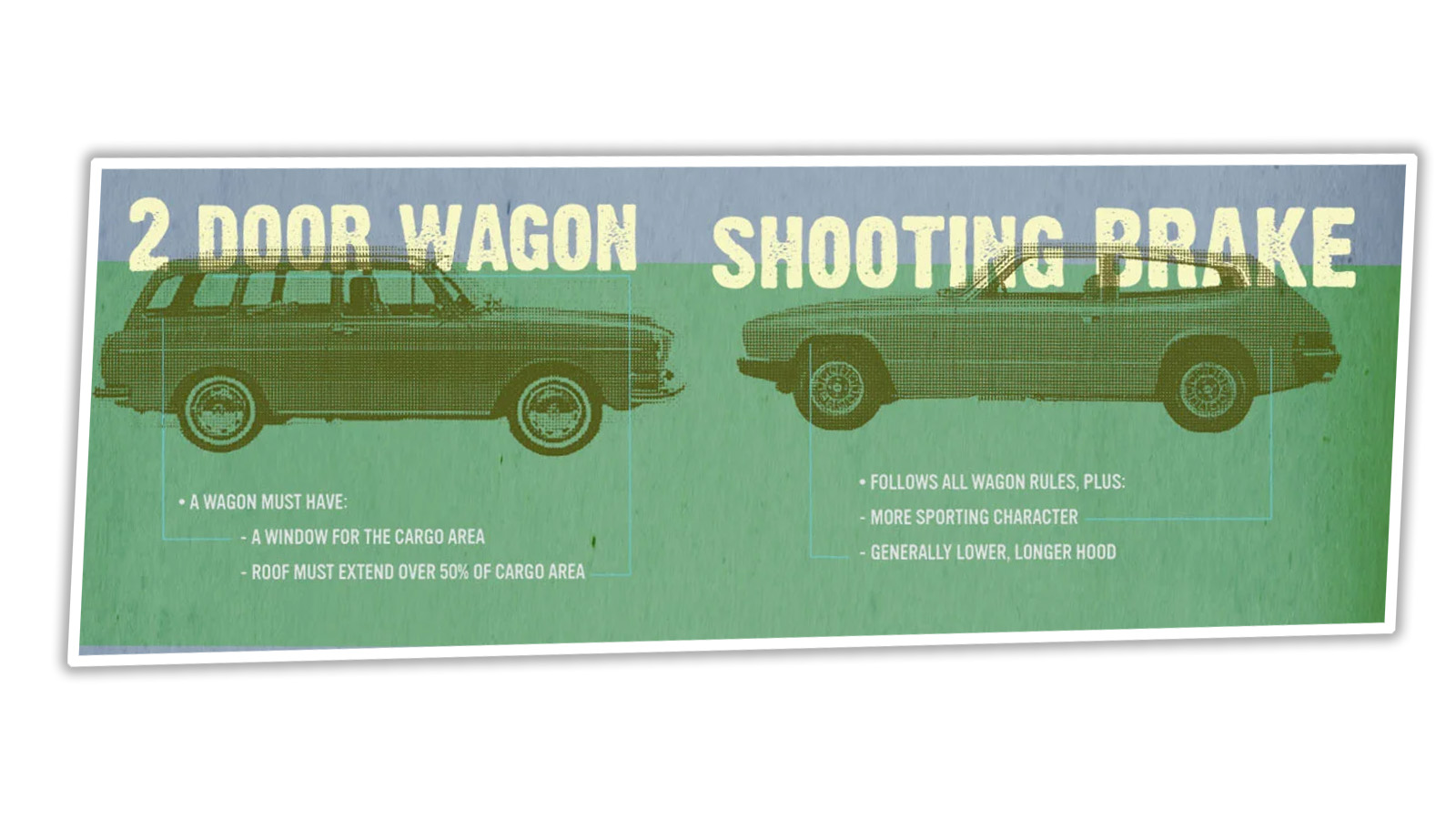 A car that has no window for the cargo area is either a hatchback, or perhaps a van derived from a car, but cannot be a wagon.

The second classic Wagonhood Rule is that the roof of a wagon must cover at least half of the cargo floor:

This means that the roof will necessarily be a bit long, but this doesn’t affect the angle of the rear, or the type of rear door, be it tailgate, side-hinged door, hatch, or whatever. All that matters is that the roof extends over at least half of the floor space in the cargo area, even if that cargo area is small.

A good example of the roof-length rule can be seen in the Volkswagen Dasher/Passat: 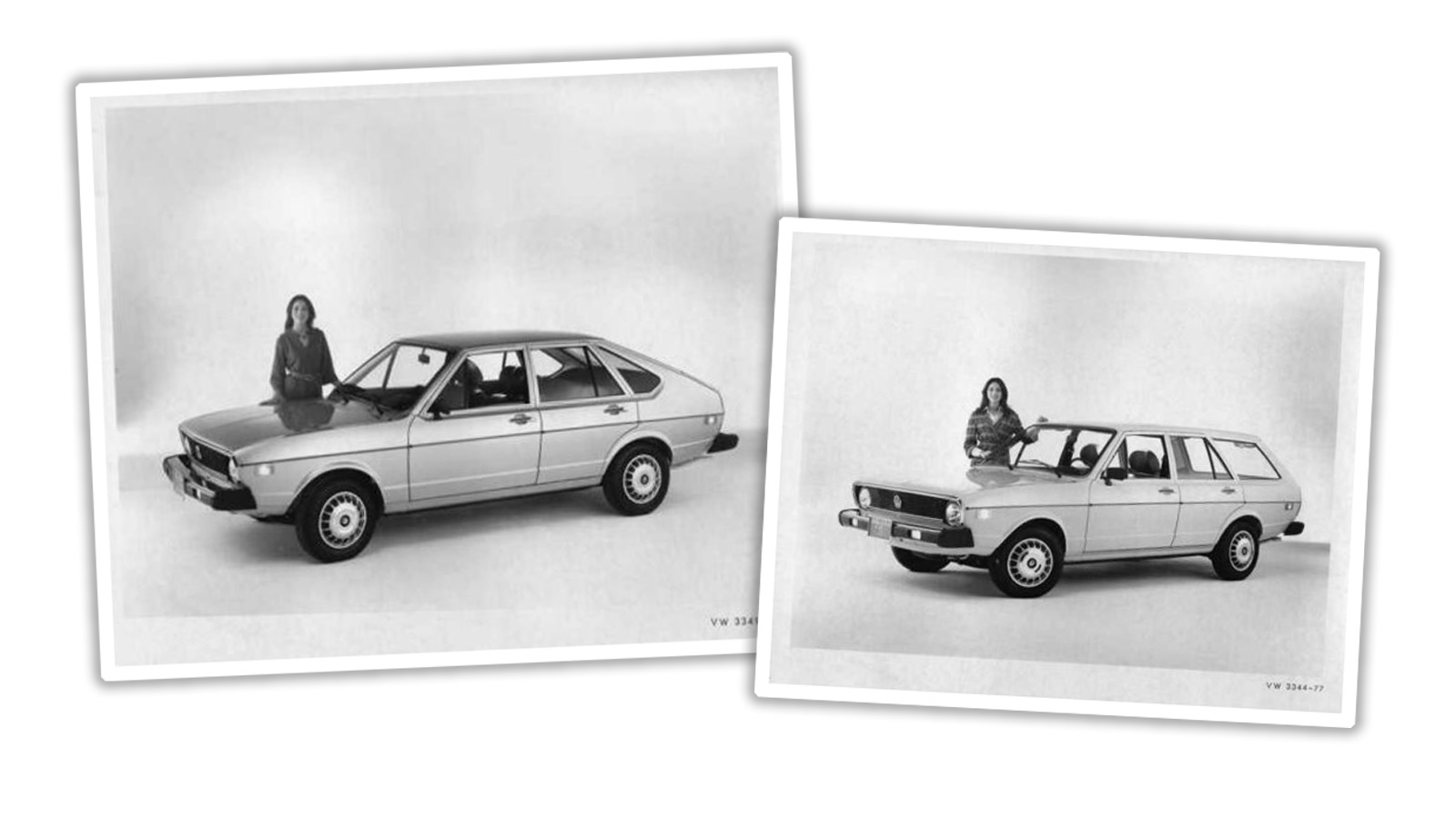 Both versions have window area on the sides of the cargo area, but only the Dasher Wagon has a roof that extends to cover over half of the cargo floor.

In the original post, I had a few pass/fail examples: 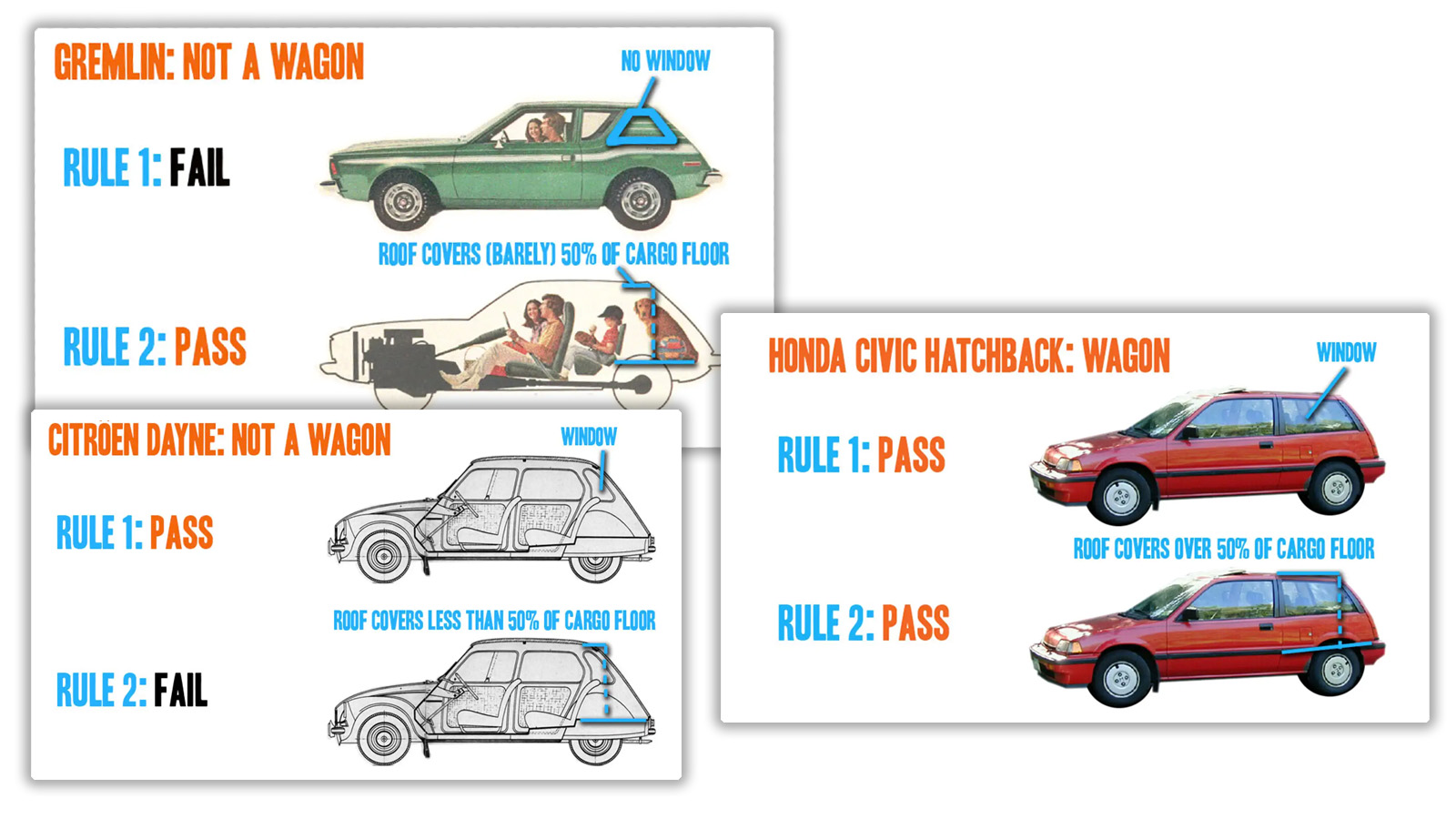 Okay, I think these rules still stand, and should cover most examples of wagon identification. I did realize that I needed one other rule, though: 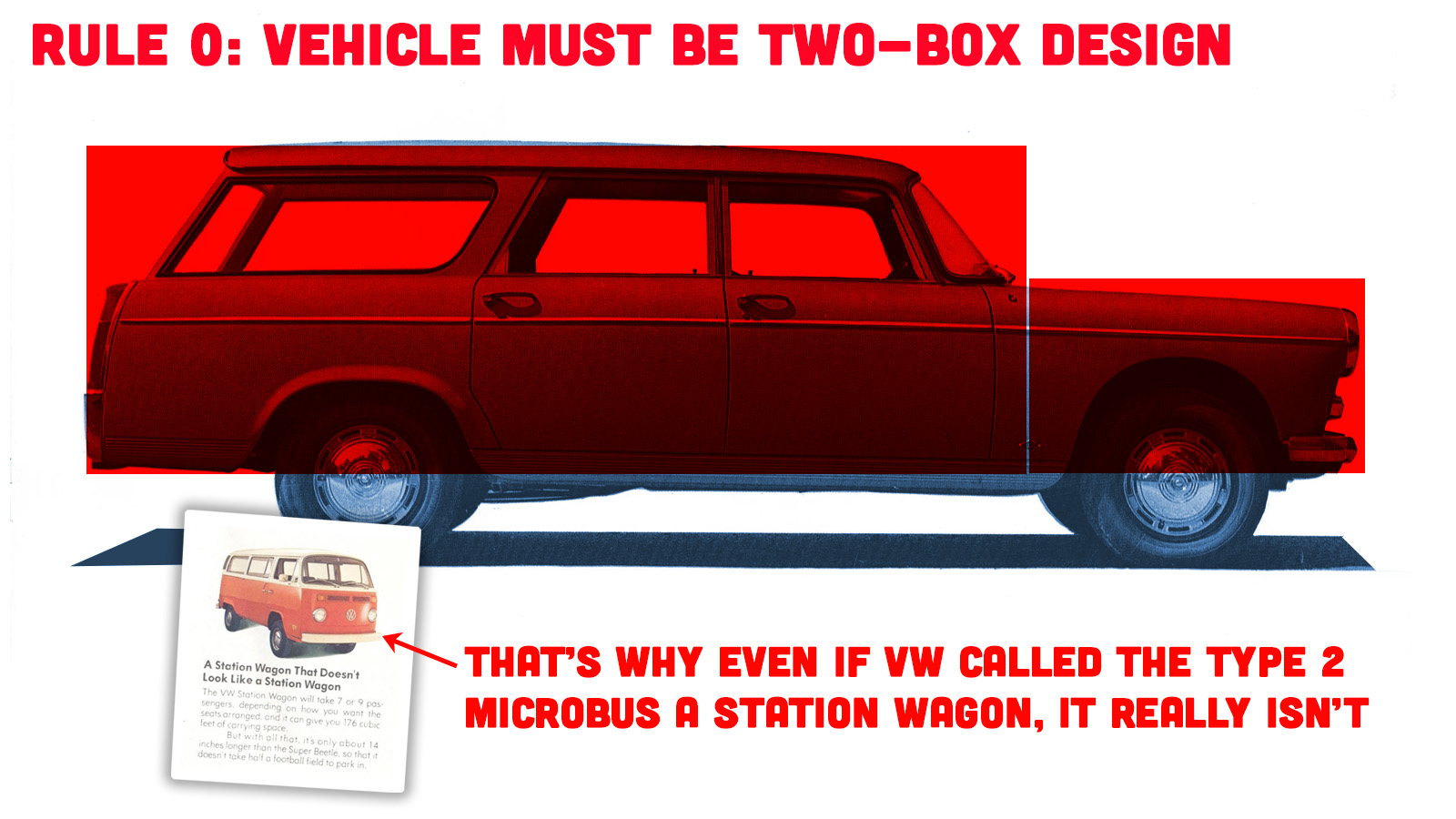 Rule 0 is the Two-Box rule. Now, I don’t think this will come up much, but I realized that a number of vans could pass Rules 1 and 2, but they’re clearly not station wagons, because a Wagon Must Be A Two-Box Design. That is, a wagon needs a hood of some kind, even if it has no engine in there or is a bit stumpy or whatever.

Volkswagen tried calling the Microbus a Station Wagon in ads in the 1960s, but we all knew it really wasn’t one: it’s a van. Because a station wagon needs a hood, hence Rule 0.

Okay, now let’s get into what I’m calling the Crossover Clauses. First, know this: Crossovers and SUVs are station wagons if they meet the now Three Rules of Wagonhood. So they can be wagons, but they are a subcategory of wagons, based on the following:

Crossover Clause A reminds us that if the proportions of a given wagon have a higher ratio of height to overall length and a comparatively high hood and beltline, they enter the subcategory of SUV or crossover. I wish I could have hard and fast ratios for this, but the wide variety of vehicle sizes and proportions make this nearly impossible. So, this is a bit subjective on paper, but pretty obvious in practice.

Does the vehicle look tall? Is the hood high? Then it’s likely an SUV/crossover.

We can further refine this subcategorization with Crossover Clause B: 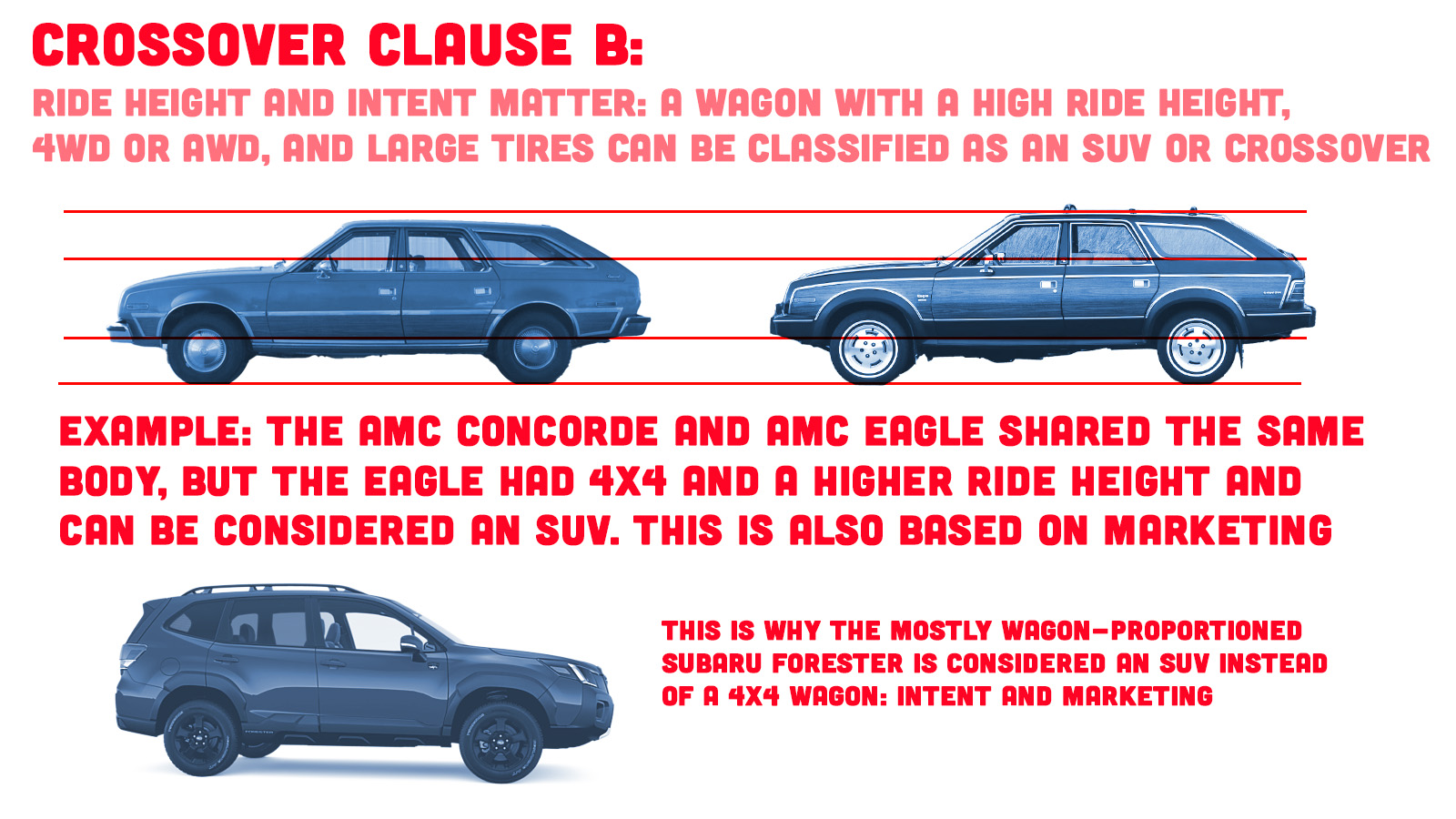 Clause B states that both intent and ride height do matter. If a carmaker gives a vehicle a high ride height, big wheels, 4WD or AWD and a bunch of chunky cladding and a name that suggests something like rocky crags or the animals/people that bound over them, then it’s clear the intent of the vehicle is to be a crossover or SUV.

A great example of this is the AMC siblings Concorde wagon and Eagle. The Concorde wagon was a RWD family wagon, while the Eagle had 4WD and higher ground clearance and bigger wheels, and was marketed as something to take off-road or camping or adventuring or hunting the Most Dangerous Game or whatever.

Both cars had identical sheetmetal, bodies of the exact same dimensions. Yet AMC’s intent was clear: one’s a paved-roads family car, one’s an off-road sport utility vehicle, even if no one was calling them that at the time.

Just look at how they were advertised: 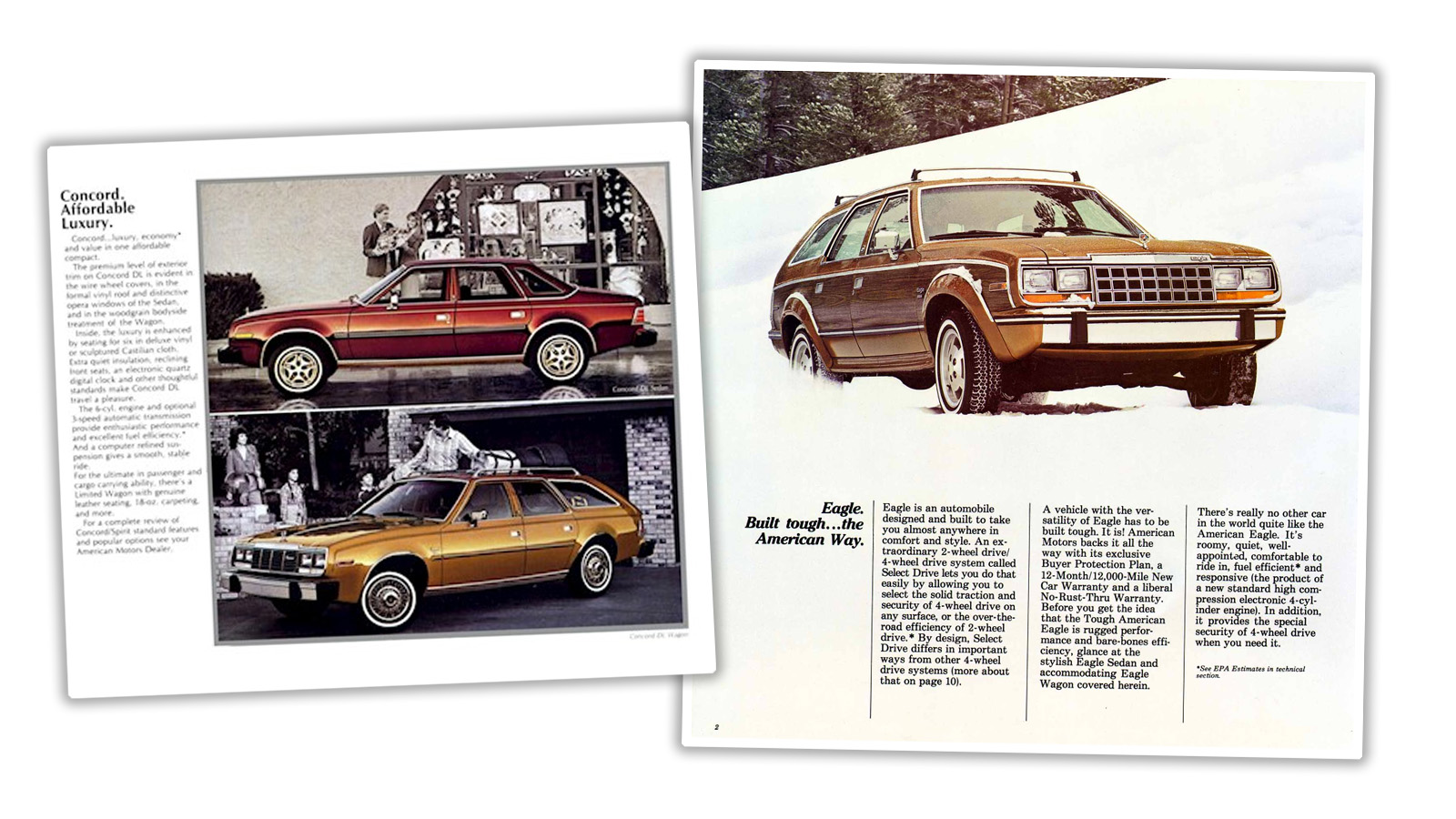 One is sold as “affordable luxury” and one is “built tough, the American Way.” It’s clear there’s very different goals for these two similar, but not the same, cars.

Make sense? Want to try a little test? Let’s do a car that meets the general Crossover Clauses, and see what we get: Hondas HR-V, one from 1999 and one from 2022: 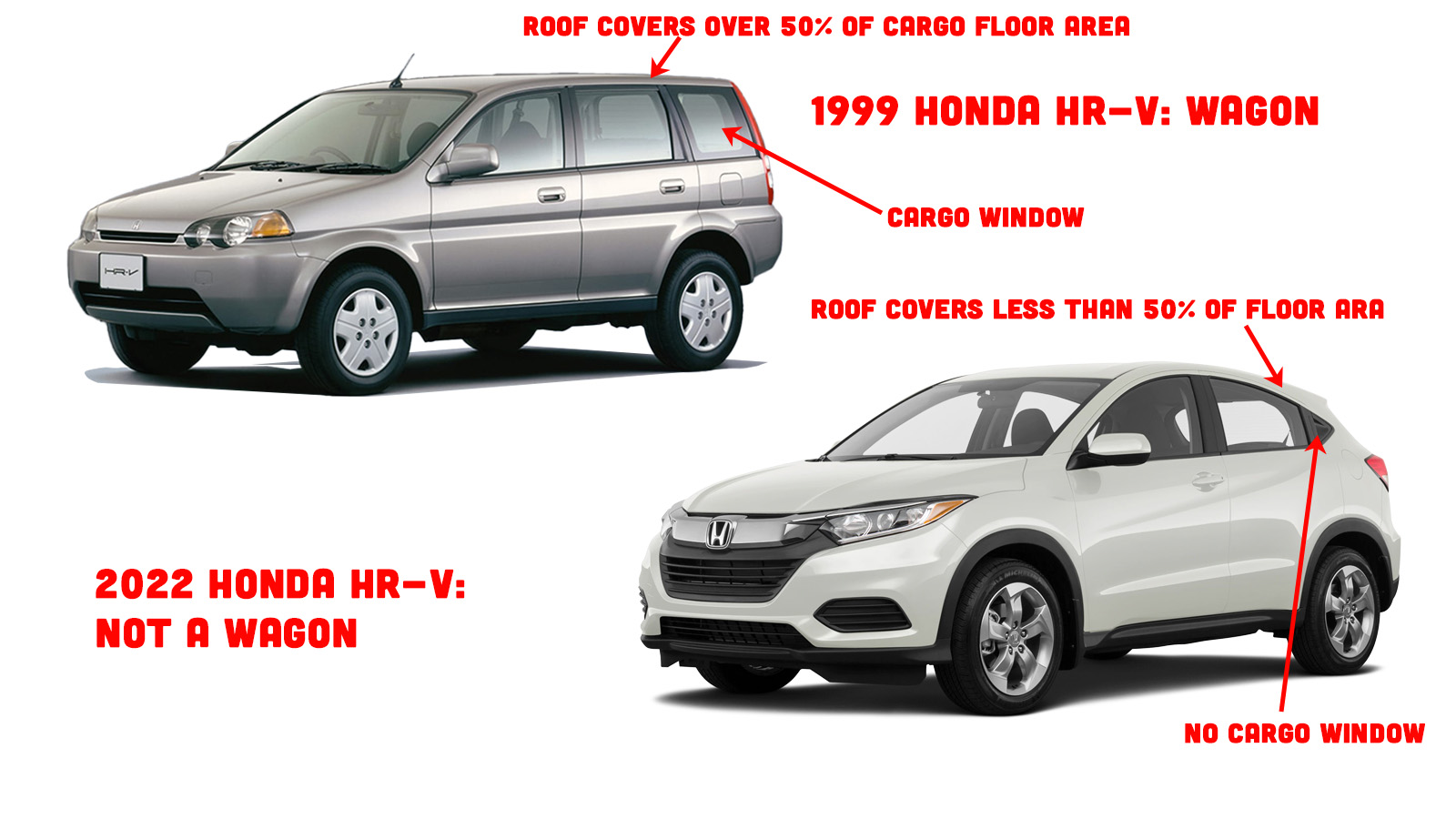 Here’s an example where both could be considered crossovers from a proportion and intent standpoint, but only one, the 1999 one, is an actual wagon. This is very clear: the 2022 HR-V lacks a cargo side window, and the roof is too short to cover more than half of the cargo floor. Essentially, the new HR-V is a crossover-ized hatchback, not a wagon.

Let’s do another Honda example: 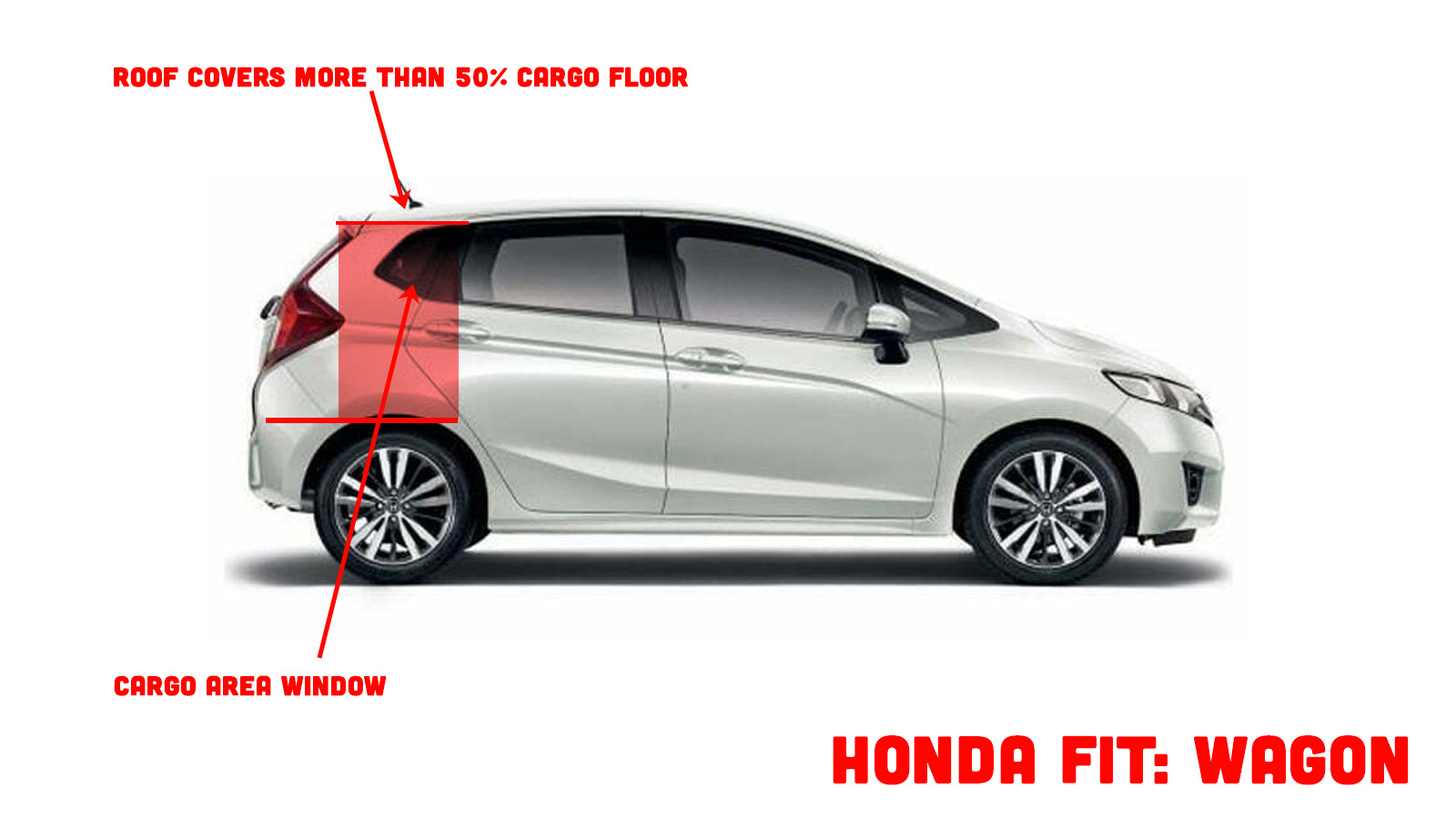 The Fit is a wagon. Even if it’s small and has a very hatchback-like rear, it meets the basic criteria, so it’s a wagon.

I hope this helps. Now more than ever it’s important that we find ways to all get along, and the first step to that is getting some real rules in place about what makes a station wagon.

I'm a co-founder of the Autopian, the site you're on RIGHT NOW! I'm here to talk to you about taillights until you cry and beg me to stop, which I absolutely will not. Sorry. Hug? Also, David's friend.
Read All My Posts »
PrevPreviousSmall Commercial Vans Continue To Die Off As Ram Kills The ProMaster City
NextThe 2023 Dodge Charger Super Bee Packs Drag Radials To Send Your Child’s Favorite Toy Straight Through The Rear WindowNext