One of the details about Tesla’s low-polygon, upcoming electric pickup truck that has had a lot of people wondering is the single windshield wiper arm. When the big-ass arm was first seen on a prototype late last year (the original one that was shown way back in 2019 didn’t have any wipers at all) it spurred a lot of discussion and speculation, though, personally, I don’t think there’s any shame in a big-ass wiper. Tesla’s recent CyberRodeo business rave gave people a closer look at the big, angular, stainless steel brute’s wiper, and revealed that the huge arm simply contained two more conventionally-sized wipers. That’s a good solution! And, odd as it is, similar solutions have appeared before, so let’s look at those.

First, though, have a look at the Cybertruck wiper:

Here’s a closeup of the Tesla Cybertruck’s massive wiper.

Turns out it is one big arm, and two smaller, overlapping wiper blades underneath #CyberRodeo pic.twitter.com/mY9RfKarce

…and here’s a still, from here, annotated by me: 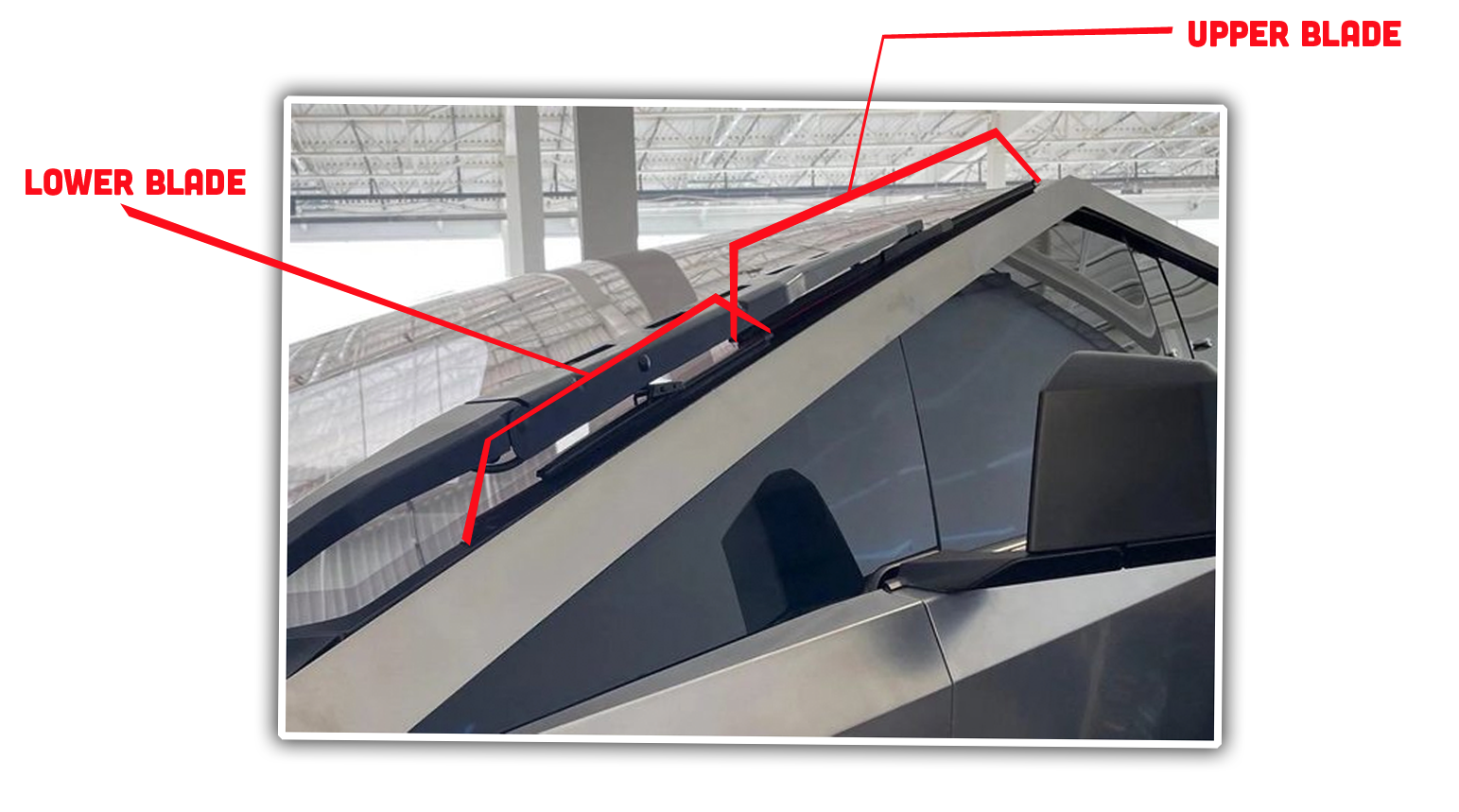 See that? Two wiper blades. Hopefully the kind you can get from any auto parts store or “borrow” from that F-150 parked in the back of that motel parking lot down the road. Really, my issues with the Cybertruck’s design choices aside, this seems like an entirely reasonable solution. Would one big, custom wiper blade be any better? I really doubt it.

A big wiper with readily-available blades is also a better solution than any of the ridiculous pressurized air or even ridiculous laser-based wipers that Tesla fans have been speculating about — because, come on, get a grip, people. Wipers work fine, even without lasers.

This dual-wiper idea, as I mentioned, isn’t one Tesla pulled out of nowhere; there have been other cars with unusually vast acreages of windshield that needed wiping. Among them are the Lamborghini Countach and the Ferrari Boxer, both hailing from the early 1970s.

Yes, if you were to travel in time and teleport into any random 14 year-old boy’s room from 1980 to 1990, I bet you’d find a lot of disgusting things under the bed and a Countach poster on the wall. 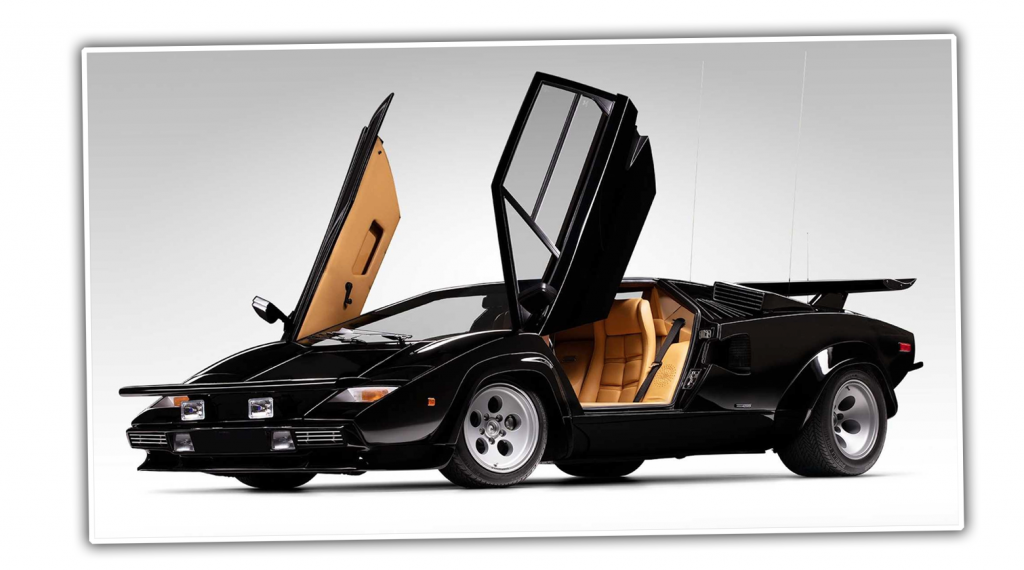 The Countach is something of an automotive icon, of course, but in case you’ve recently had a full brain-wipe, I’ll remind you about it. Arriving in 1974, the Countach was one of the defining angular wedge-shaped cars that would become so influential throughout 1980s sports car aesthetics. The Bertone-designed mid-engined beast defined what a supercar was for years and years, with a longitudinally-mounted V12 behind the seats, and a strange layout with the transmission ahead, sending power via a shaft through the engine’s sump to the differential at the rear. The look got more complex and wild as the years went on, and by the 1980s had sprouted all kinds of dramatic wings and ducts and louvers, giving it a spaceship-like look.

Anyway, if you go back into that hypothetical kid’s room and look carefully at that Lambo poster, you should see this: 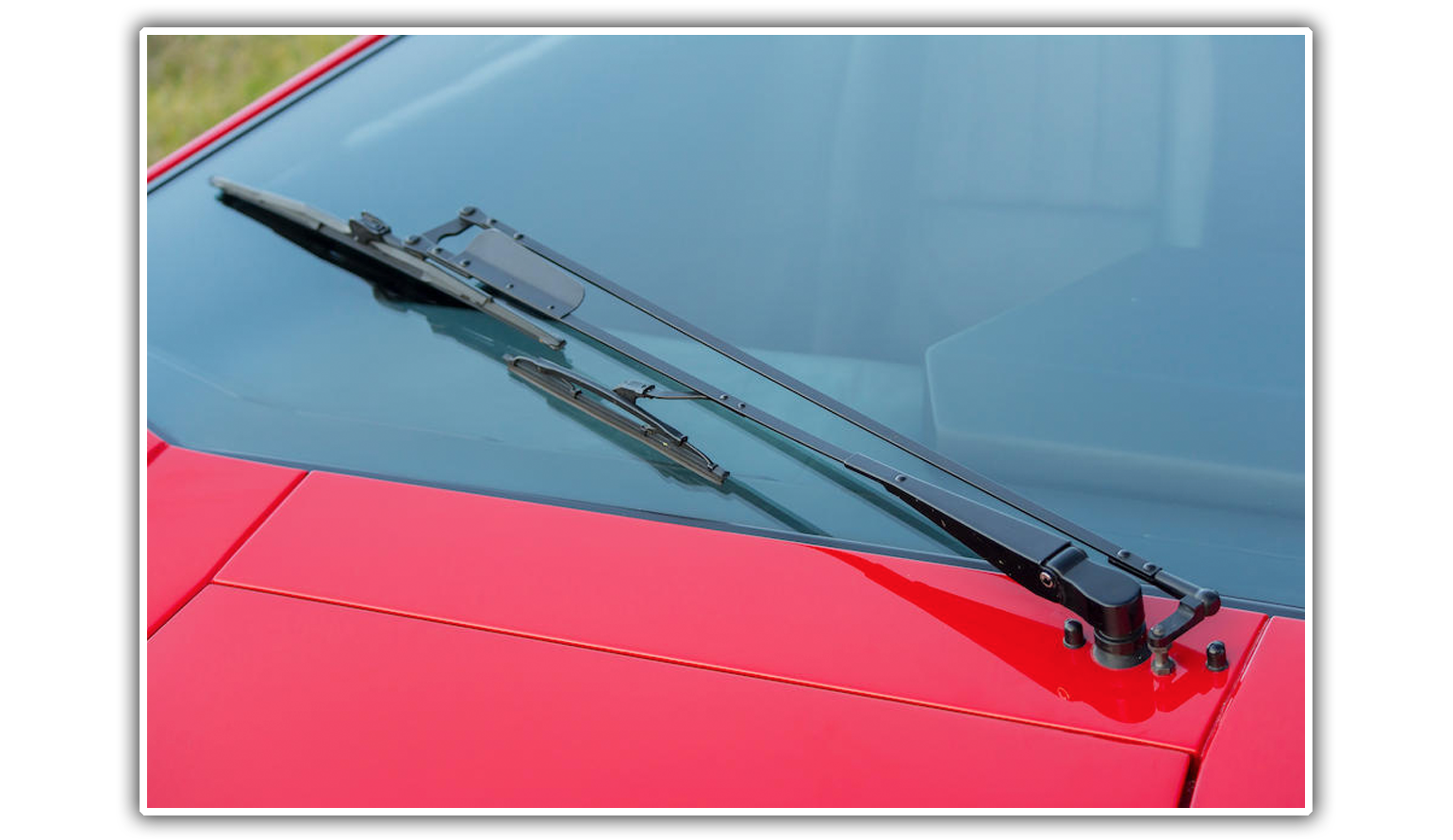 See that massive wiper arm? Not only does it have a pair of parallel bones, like your forearm, it also has two wiper blades, a big one and a little buddy, unlike your forearm. The basic idea is exactly the same as the Cybertruck: two shorter things together = the length of a longer thing.

The size disparity in the two blades is very clear in diagrams of the setup: 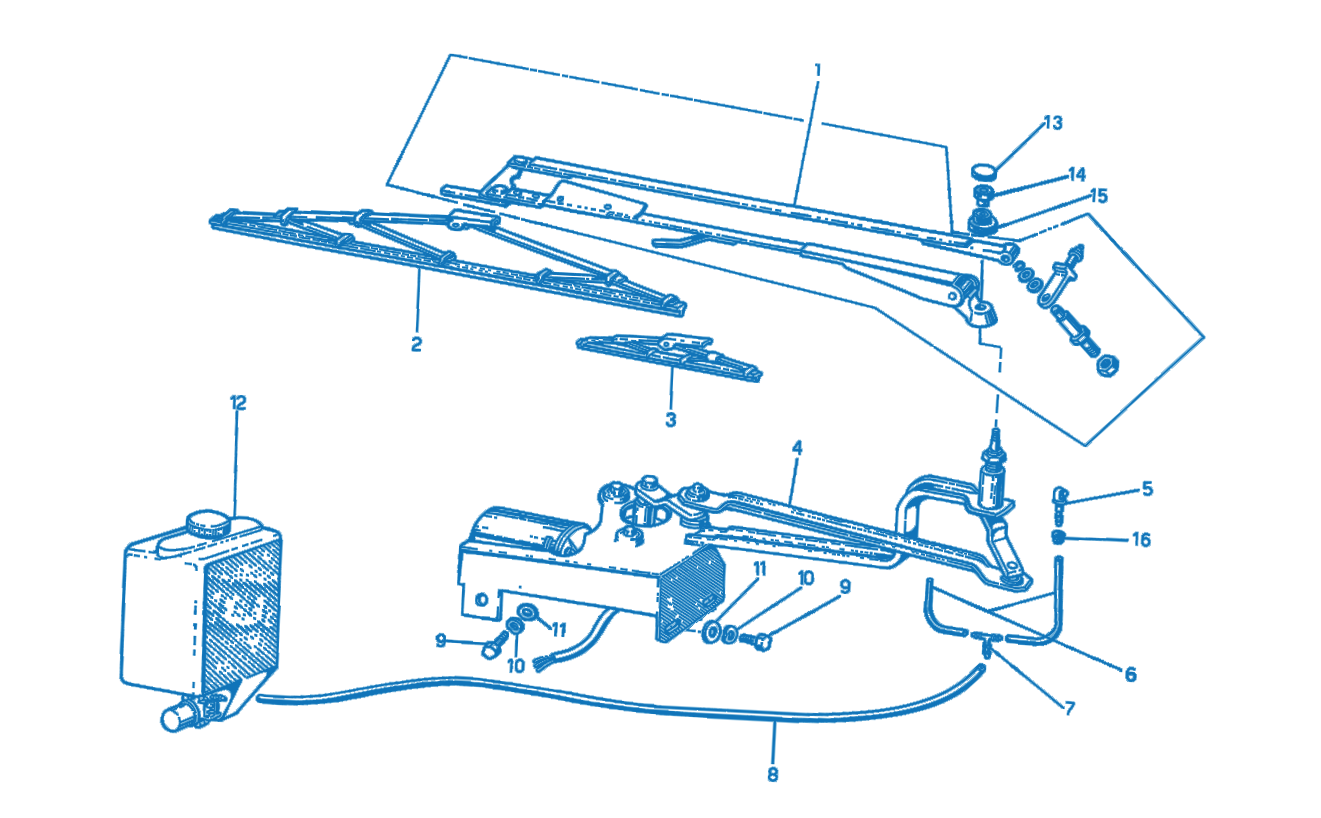 For some reason, it’s hard to not anthropomorphize those wipers into big and little brothers or a mother and child, or something similar. Man, the human mind is weird, right? 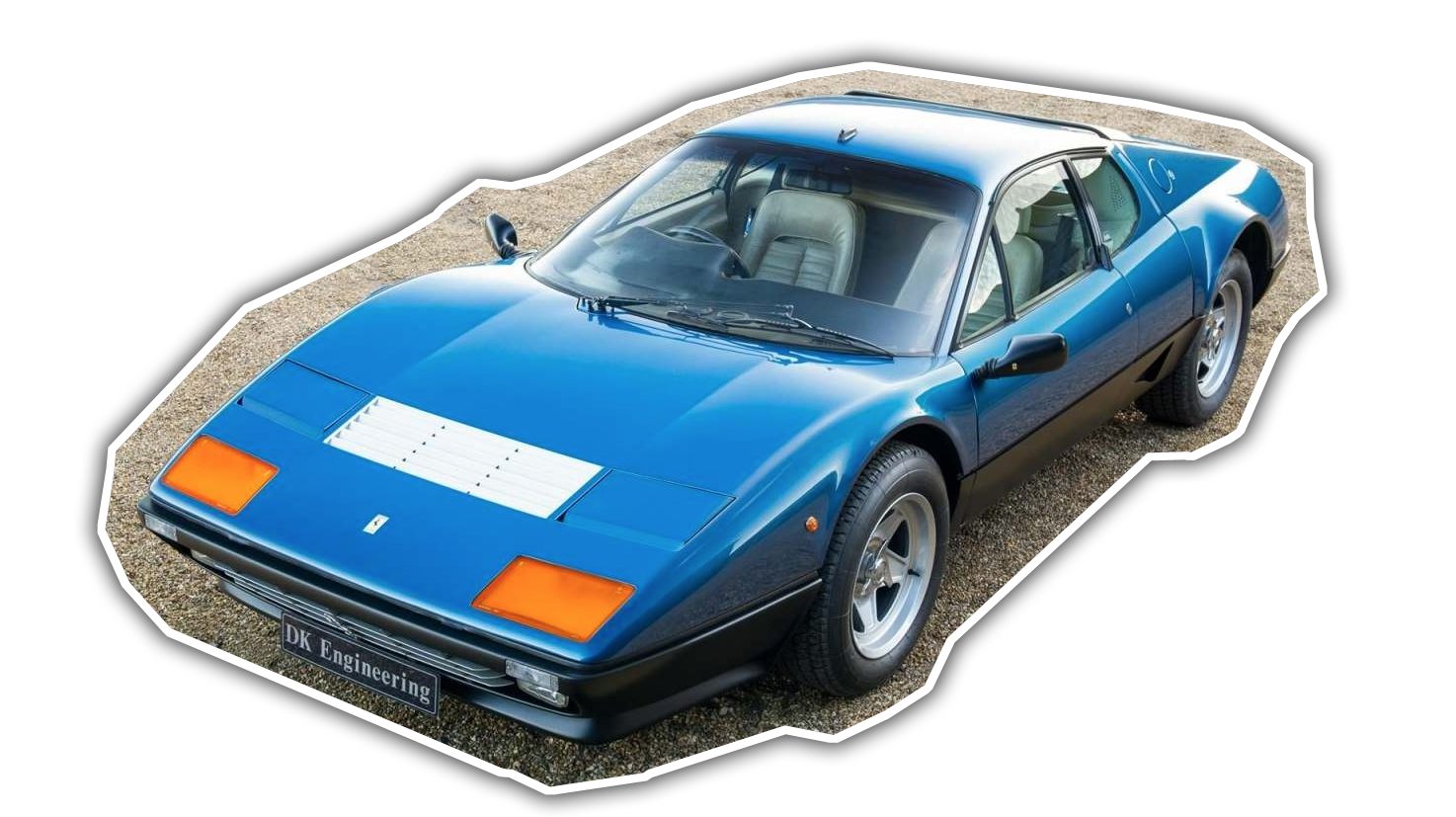 The Ferrari Boxer had a similar wiper setup.

Another ’80s era supercar icon, the Ferrari Berlinetta Boxer appeared one year before the Countach and was a clean, sleek Pininfarina design. Also mid-engined and equipped with 12 cylinders, the Ferrari used a flat engine instead of a V-design, hence the Boxer name.

Interestingly, the engine isn’t really a boxer engine, which refers to a horizontally-opposed engine; it’s techincally a 180° V-engine, and as you know, a 180° V is just a straight line, hence flat. It looks like a real boxer, but unlike a boxer, a flat-V engine like this has its pistons sharing a crankpin (like some other V engines), but true horizontally-opposed engines have separate ones.

Most people, of course, didn’t know that or really care, and just appreciated the sleek looks and speed of the Ferrari, which also found its way onto many bedroom posters, too. Personally, I like these cars because they have what may be the largest front indicators ever installed on a production vehicle. Look at the size of those things!

Back to the wipers, though: The Ferrari Boxer’s dual-blade solution is a little more nuanced than either the Countach or the Cybertruck’s in that the blades are at different angles, and don’t just team up to form an ersatz long blade; they’re actually sweeping slightly different arcs.

The two-blade solution is one I can support, but don’t get too cocky, Tesla, because you’re wiping in the footsteps of giants here.

(Thanks to Hans, our Bishop of Automotive Ephemera)

I'm a co-founder of the Autopian, the site you're on RIGHT NOW! I'm here to talk to you about taillights until you cry and beg me to stop, which I absolutely will not. Sorry. Hug? Also, David's friend.
Read All My Posts »
PrevPrevious1982 Ford Thunderbird vs. 1964 Chevy Corvair: The David Tracy Showdown
NextThe 1987 Lincoln by Vignale Was A Beautiful AWD Concept And A Damn Dirty LiarNext